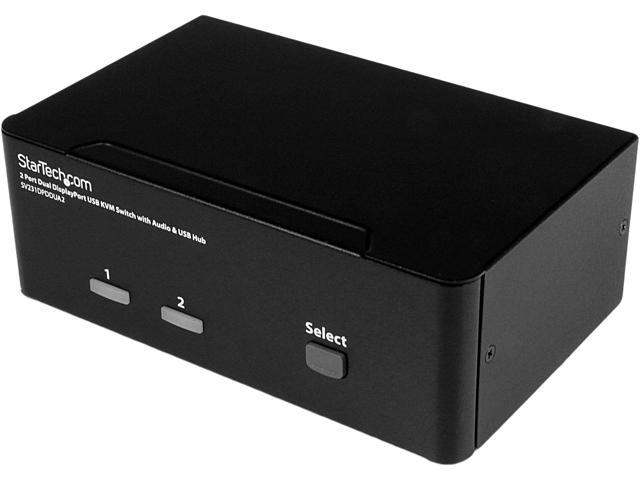 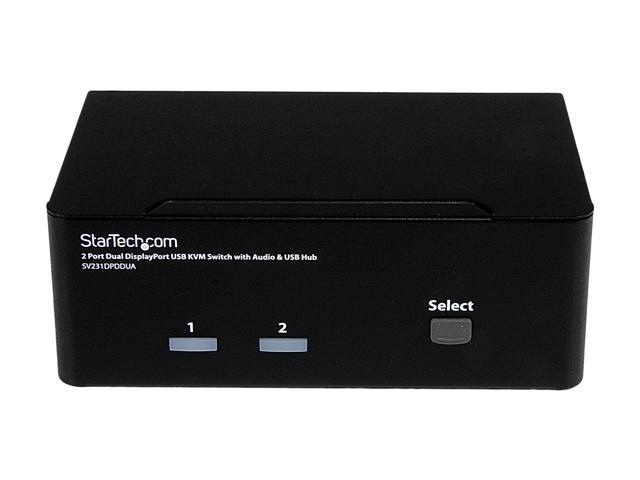 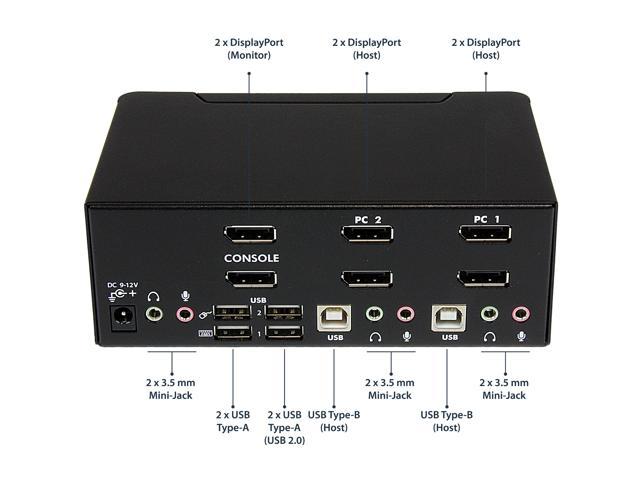 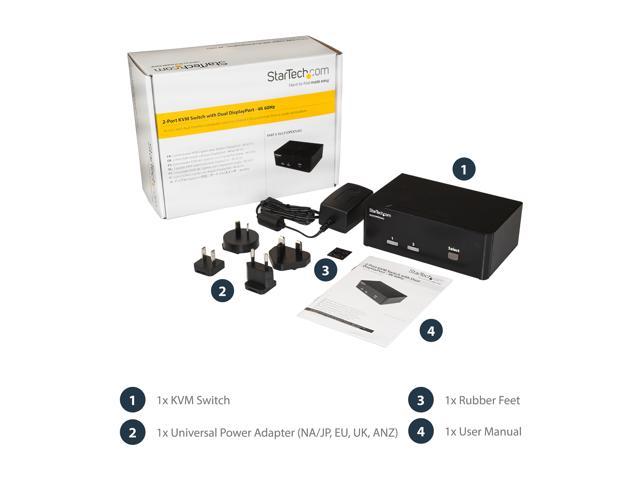 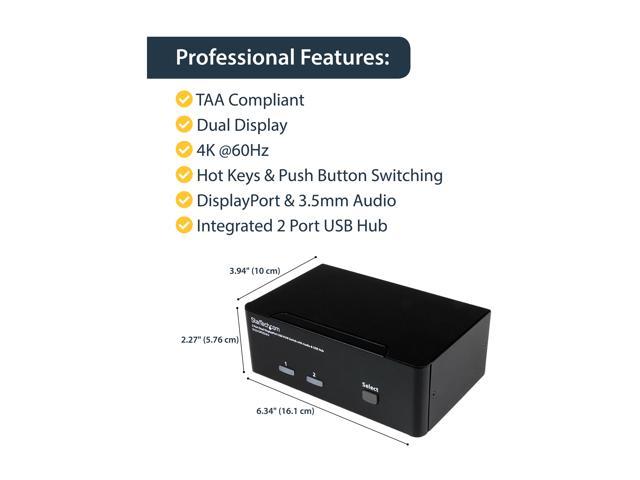 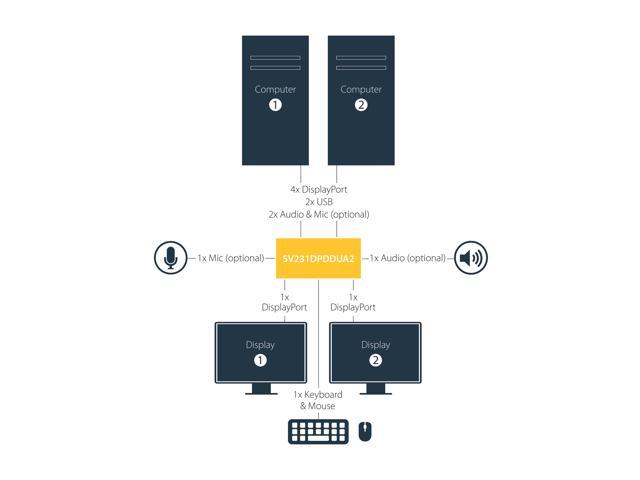 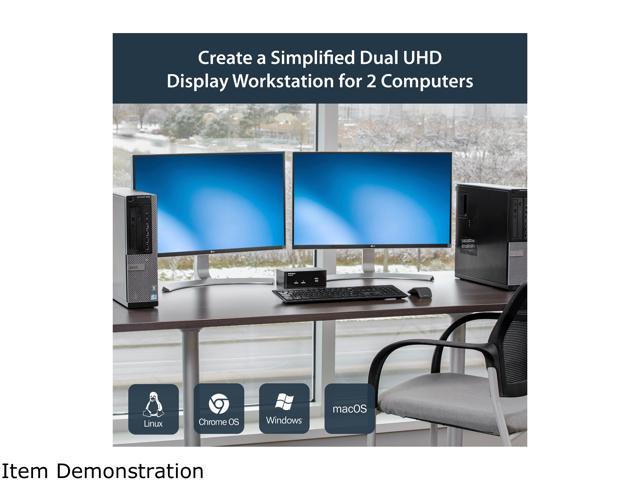 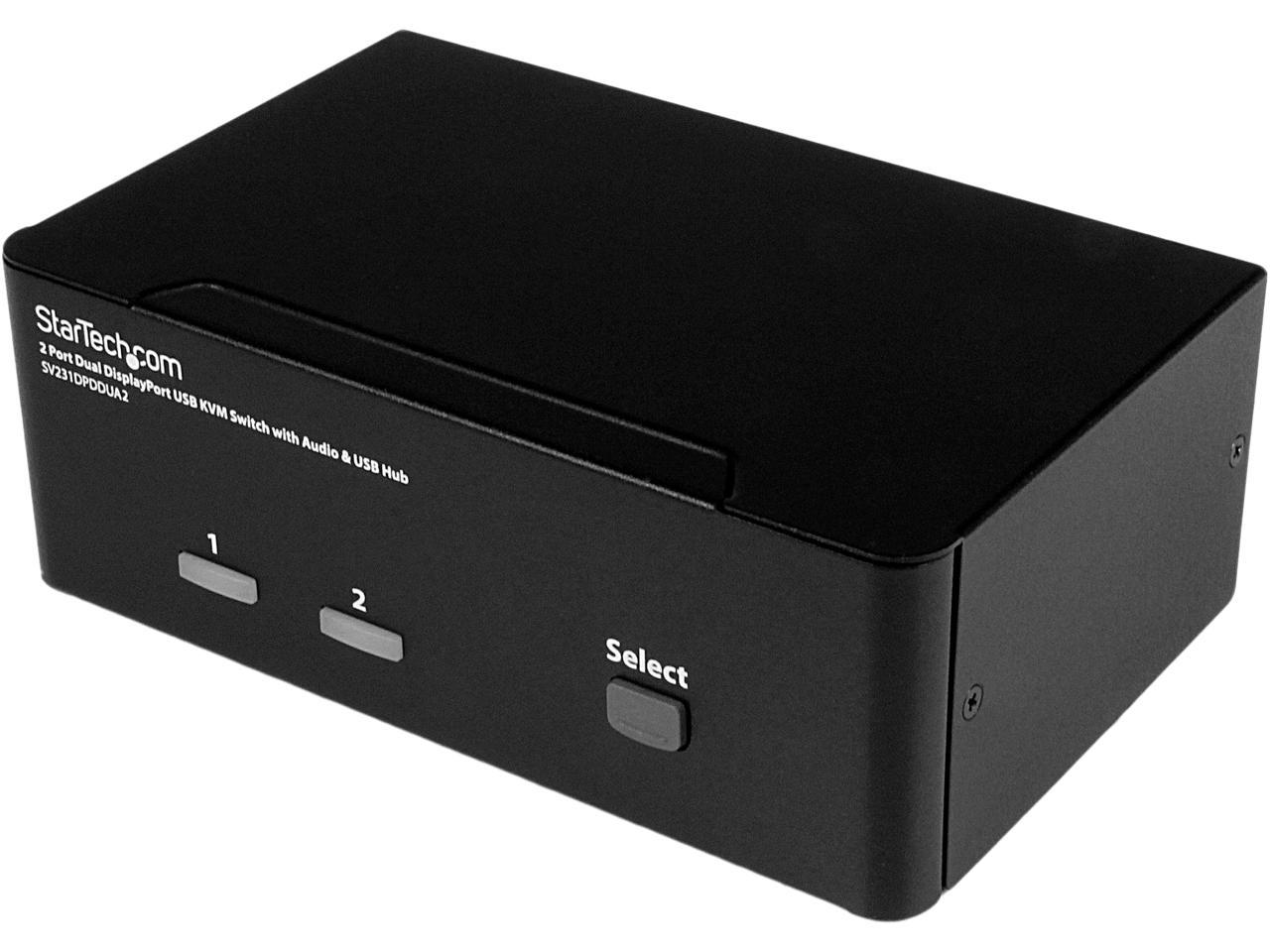 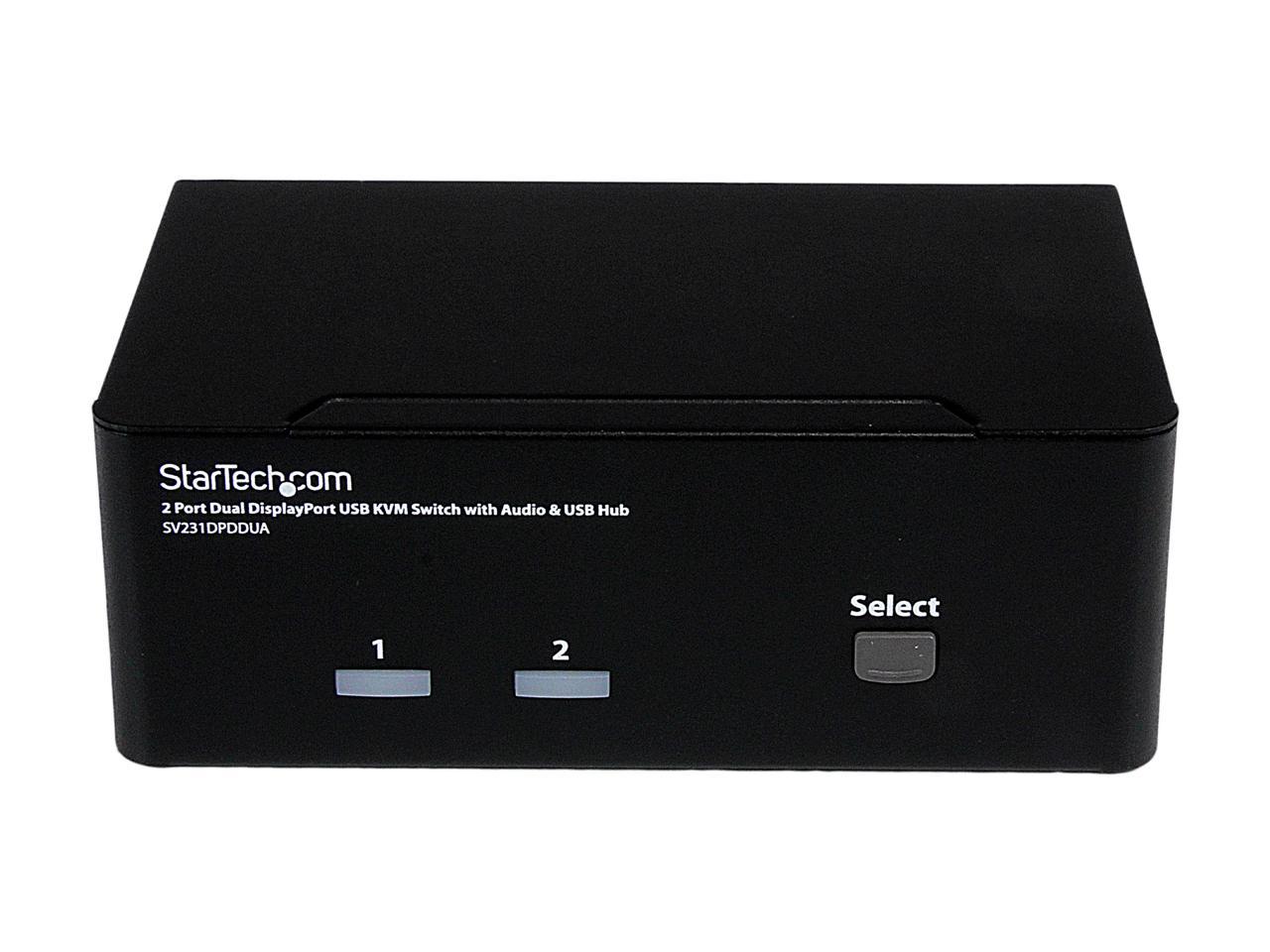 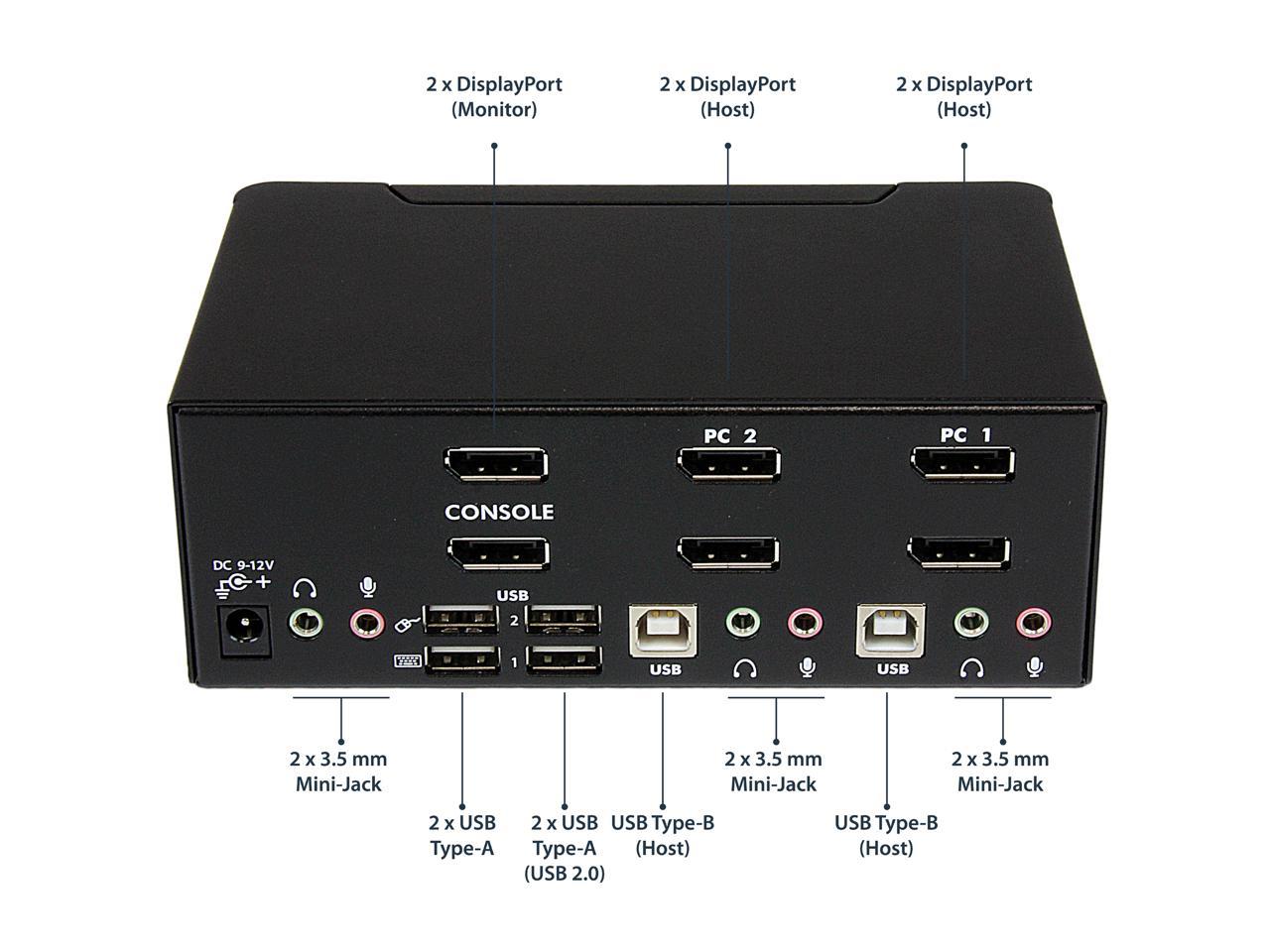 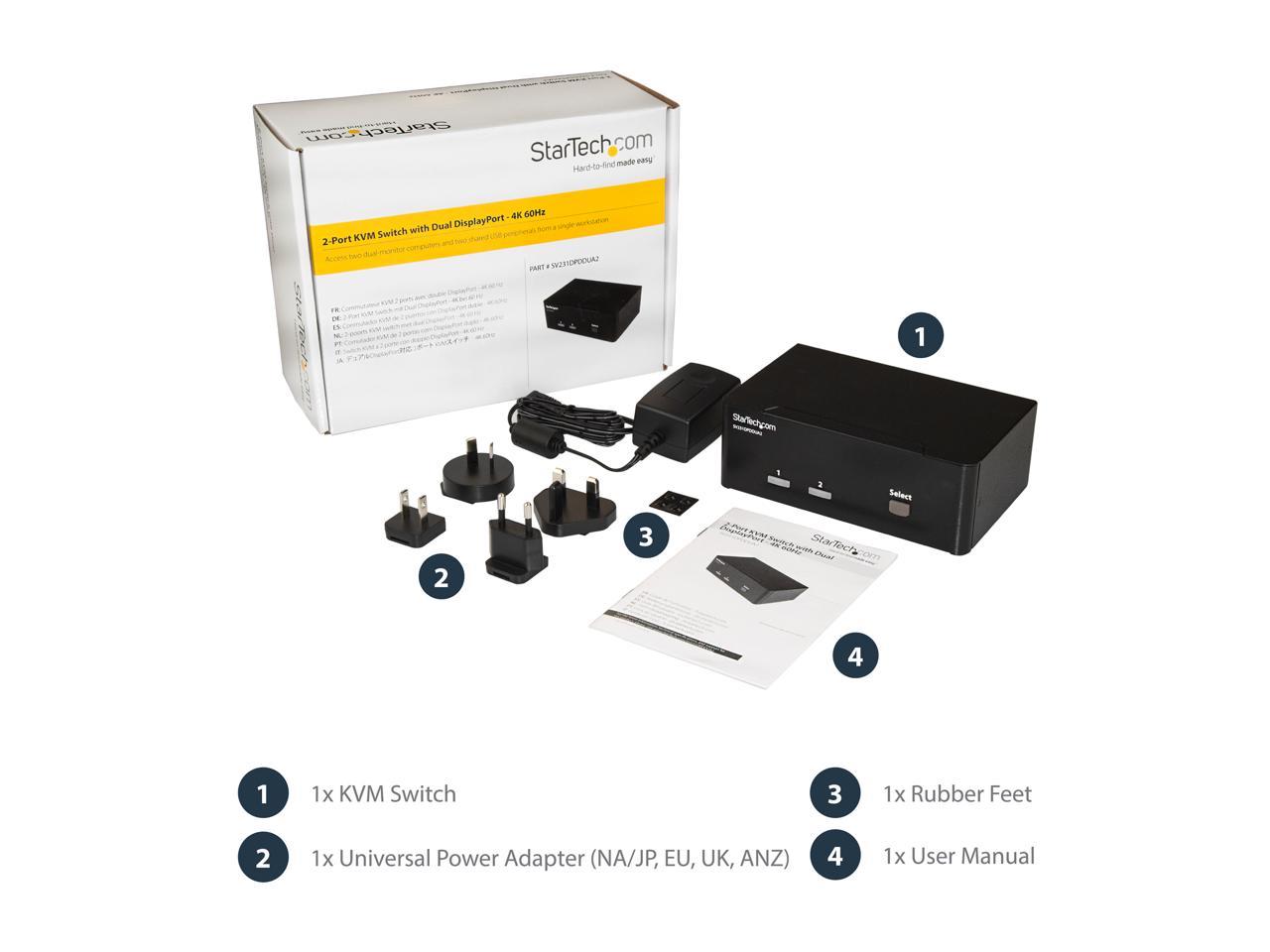 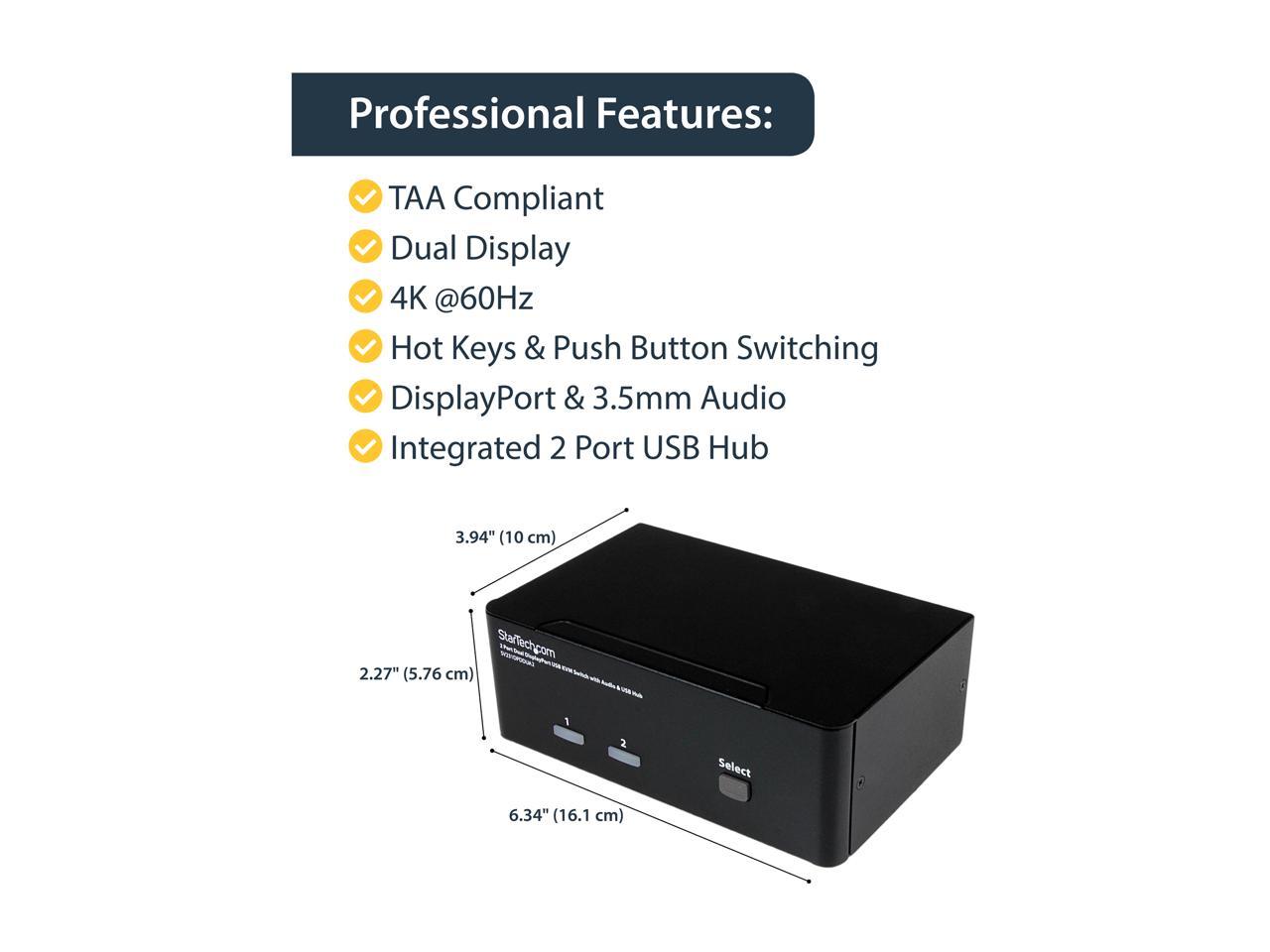 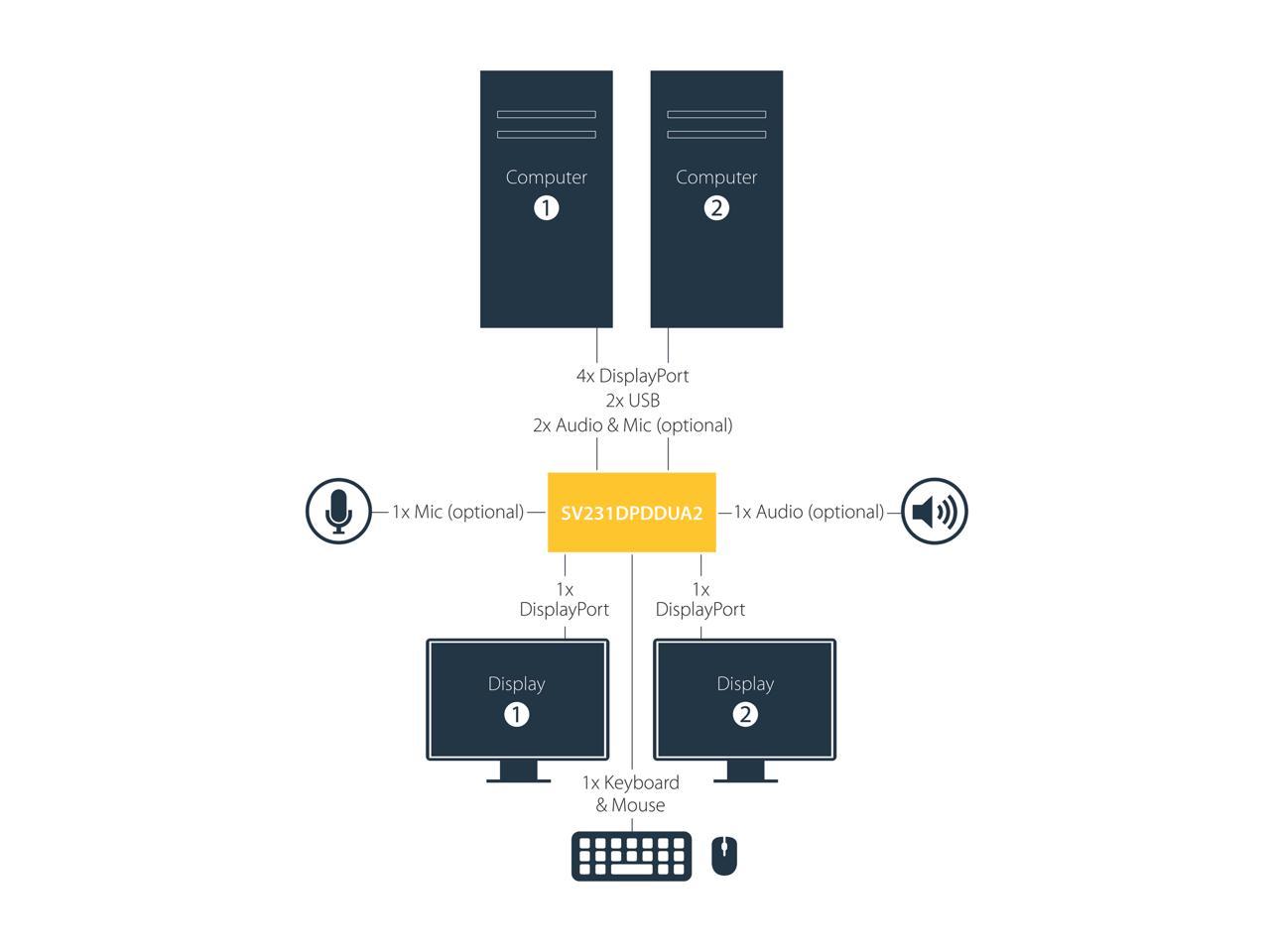 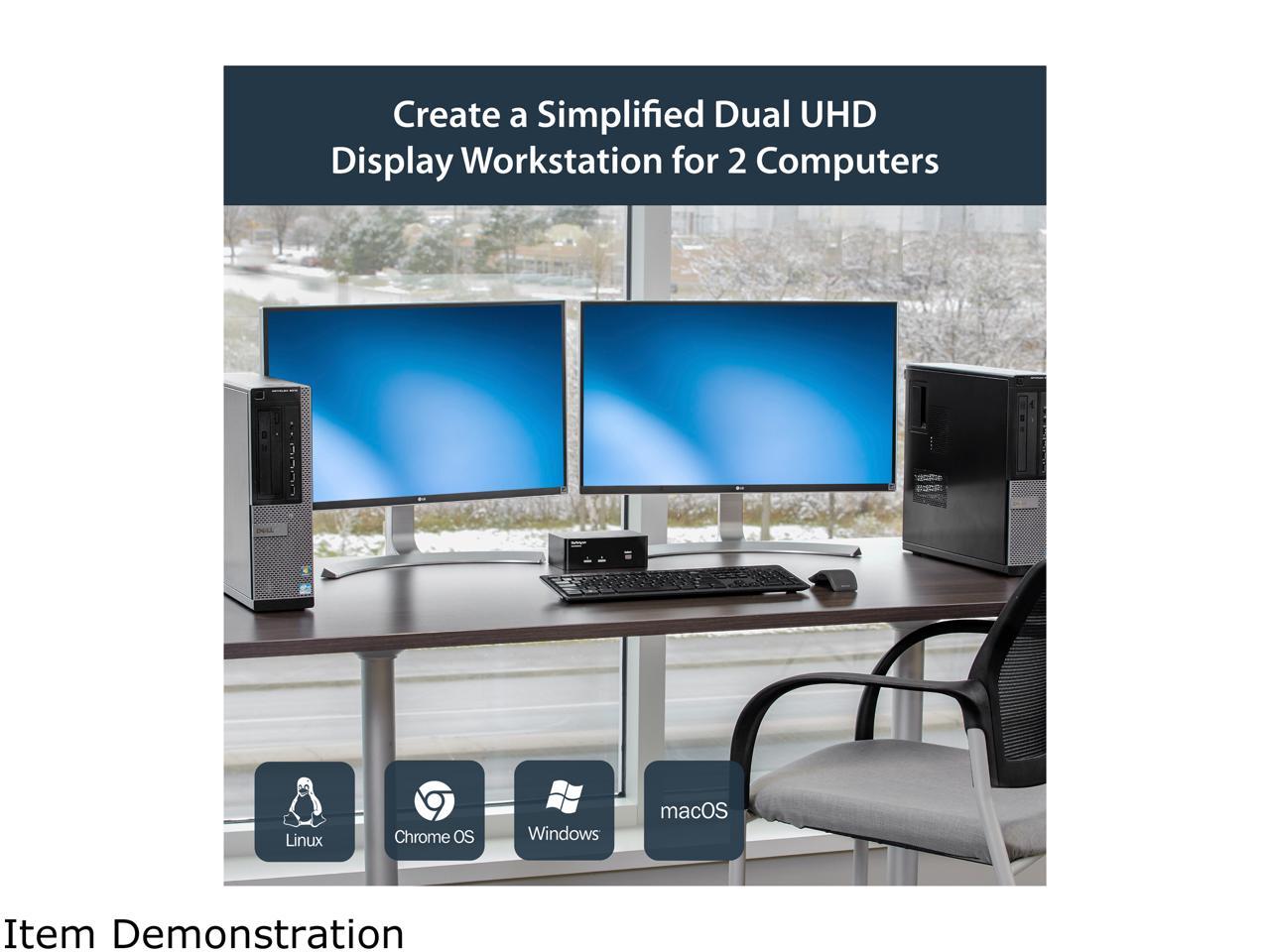 Learn more about the STARTECH SV231DPDDUA2

Pros: Operationally the KVM switch works well. It is inexpensive compared to other DisplayPort switches

Cons: When connected to a 27" 2560x1440 IPS panel, the panel flickers off and on randomly (generally 6 or more times per hour with the "off" ranging from 2 seconds to just barely noticeable flicker. I had to replace the switch with a different model (which works fine). The other con is the non-standard hot keys for switching input.

Overall Review: It is too bad that the DisplayPort signal is unstable otherwise this would be a device I could recommend.

Pros: I've got a MacBook Air, a 2016 MacBook Pro with dock, a Razer Stealth laptop with CORE dock, and a Mac Mini. I't nice to one able to switch my Dell U2515H monitor, plus a keyboard and mouse, between the four computers. When it works.

Cons: Two major issues, and one minor quibble: 1) The box doesn't query the monitor for it's parameters and then emulate the monitor on the other ports. It disconnects from one computer (which may have issues with it's monitor disappearing) and connects to the other one (which sees a "new" monitor, queries it, and goes through the "setup a new monitor" process). So switching takes upwards of 6 seconds and can cause windows to shift around. This isn't rocket science, KVM switches have been doing monitor emulation for decades now... 2) Not every computer comes out of "display sleep" mode properly every time, so I have to disconnect the computer or monitor cable and plug it back in. Which usually works (I don't often have to power-cycle the computer, but it wreaks the havoc you'd expect with my workflow), but the seamless and quick (oh, ,wait, see above) monitor switching isn't quite as useful if you have to unplug and reconnect cables manually. 3) This box doesn't come with cables, which I knew up-front, and so this is a relatively minor quibble. Still, given that DisplayPort cables come in "Certified" and "other" versions, it's now up to the end user to understand, research, and source cables, which is a bit of a nightmare. And so, if something doesn't work, is it the computer, the cables, the KVM switch, or the monitor? At the end of the day I DON'T CARE. I want the KVM function I've had for decades with my VGA and DVI KVM switches, and this expensive box isn't it. I'm still in the market for something that works properly.

Overall Review: I was hesitant to get this due to the mediocre reviews on this and other sites. I have a Desktop PC, a Mac Mini, and a PC laptop to connect to my new 27" Dell Ultrasharp monitor. The monitor requires displayport to get full resolution, and this was the only reasonably priced option for 4 port displayport KVM....So I decided to give it a shot. It works well!! All devices plugged into USB (headset, webcam, wireless keyboard and mouse) are recognized by all devices and work well. The monitor has a USB hub and I plug that into the KVM's hub and all devices work fine. Switches between computers are fairly quick, although the monitor momentarily goes into power save for a half second during the switch. Audo comes through displayport just fine. The keyboard shortcuts work well to switch devices, or you can press the buttons on the unit. My last KVM had a small wired remote so I could tuck the unit away. This one does not have this feature and I sort of wish it did...but I think I can make due with the keyboard shortcut (ctrl-ctrl-1 for device 1; ctr-ctrl-2 for device 2; etc) I could not be happier or more pleasantly surprised with this purchase.

6 out of 6 people found this review helpful. Did you?
Anonymous
Ownership: 1 week to 1 month
Verified Owner
Works will on Displayport 4k monitors with some concerns around USB6/11/2017 1:13:02 PM

Cons: USB for the keyboard/mouse doesn't always switch well. Cannot decide if it is the USB Hub that doesn't get detected quick enough by the OS (I am switching between Windows & MacBook) or if it is the device. Still beware you may need to disconnect/reconnect the connection to the computer in order for your device to be found.

Cons: "Looses" 2nd PC's monitor frequently - would not bring up a picture. Had to power cycle KVM to get picture back. Occasionally, keyboard seemed to stick on a character, and instead of 'you', I suddently have 'youuuuuuuuuuuu'. Dissapointing for a higher priced switch.

4 out of 4 people found this review helpful. Did you?
Anonymous
Ownership: more than 1 year
Verified Owner
Display port worked fine but the USB stopped working9/27/2019 11:22:12 PM

Pros: Worked well when it was working

Cons: The front USB ports totally stopped working after a few months. I still use the unit but only for display port purposes.

Overall Review: Maybe I had a defective unit. I would still recommend for switching display port between 2 computers.

2 out of 2 people found this review helpful. Did you?
Manufacturer Response:
We always try to ensure our customers have exceptional experiences with us and our products and we apologize for the experience you've had with our SV231DPU2. The SV231DPU2 has a 2-year warranty with lifetime technical support and we want to make this right for you. Please contact us for a replacement at 1-800-265-1844 or www.startech.com/chat where our Technical Advisors are available 24 hours a day, 5 days a week to provide support. Matt, StarTech.com Support
Justin M.
Ownership: 1 week to 1 month
Verified Owner
Barely functional at the best of times8/31/2018 9:09:12 PM

Cons: - High impedance on audio port means your analog headset will sound terrible with a lot of static and popping - USB hub is only 1.1 on the off chance it even works. 1 out of 4 ports is just non-functional. - DisplayPort doesn't work at all, monitor (nice high quality ASUS ROG PG279) does not work on KVM at all - Only the keyboard USB port works consistently, the rest only sporadically work - Doesn't come with any connector cables at all - Adding a powered USB hub to the mix does not make anything better

Overall Review: Unless every USB device you have is a thousand years old and is only 1.1, you'll get only 1/3 use out of this device. Even that's pushing it, because the only thing this does consistently is switch the keyboard port. The primary reason I bought it, the DisplayPort switching capability, is non-functional. The second reason, the 4-port USB hub, only 3 of the 4 ports work, and they only work in USB 1.1 mode, which some devices can't function on. The third reason, the audio, sounds awful. Terrible device.

1 out of 1 people found this review helpful. Did you?
Manufacturer Response:
Thank you for your feedback on SV231DPDDUA. We're sorry for the problems you had with it. We notice that the ASUS ROG PG279 has a maximum resolution and refresh rate of 2560x1440 @ 144Hz, which exceeds the maximum bandwidth this switch is capable of and may have caused the video to not pass through. It is, however, very unusual for the 2 USB hub ports to report as USB 1.1, as they should be full USB 2.0 ports. The keyboard and mouse console ports are only 1.1, but higher USB standards should not be required for most keyboards and mice. We recommend contacting us directly so that we can find out the cause of these problems and get your setup working as quickly as possible. You can reach our Technical Advisors 24 hours a day, 5 days a week, at 1-800 265-1844 or www.startech.com/chat. Sam, StarTech.com Support
Michael R.
Ownership: 1 day to 1 week
Verified Owner
Works7/15/2017 5:35:03 PM

Pros: It works as I need. My setup is a docking station with an HP Probook laptop, my desktop with a Nvidia 1070 video card and I have two Dell 24" U2415 monitors. Both computers work at 1080p with no present issues. Also a Das keyboard and a Razer Deathadder mouse.

Cons: When switching computers, if you have video playing on the second screen, it will stop. This may be an issue with Displayport itself. Before I installed the KVM, when I turned off my monitors, the second monitor would lose everything that was on and it would be bumped to the primary monitor (this didn't occur on previous monitors using DVI), but still occurs here on both machines.

Overall Review: It took a while to get it all synced up, as you have to connect the displayport cables in one at a time in a one-by-one order. The KVM only comes with a power cable. You will need to get extra displayport cables and a A Male to B Male usb cable for each computer (same as a USB printer cable).