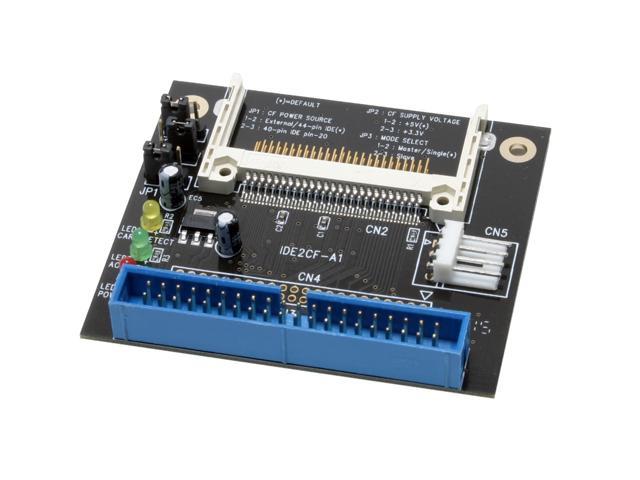 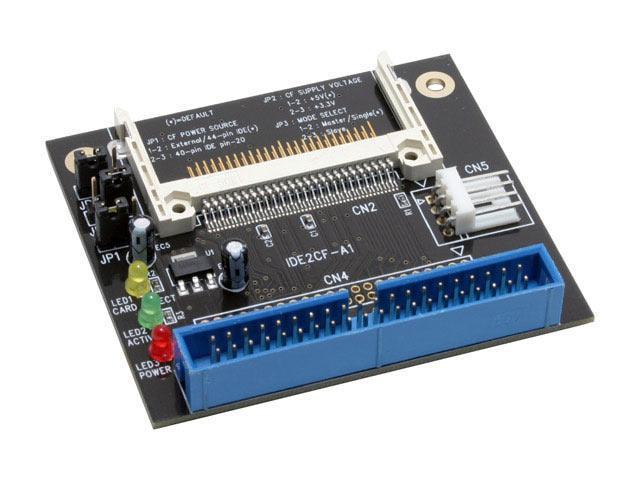 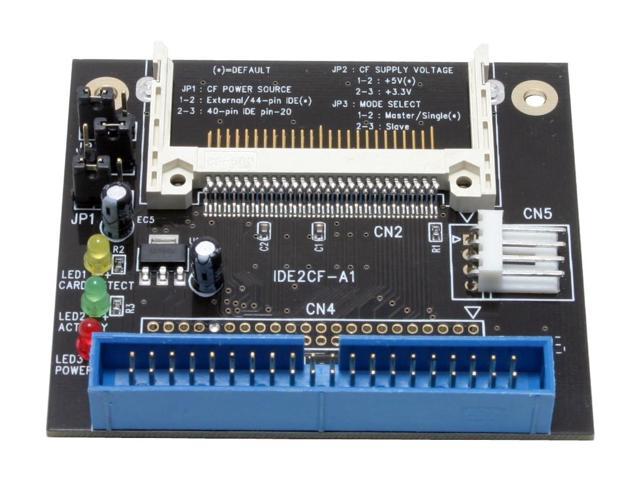 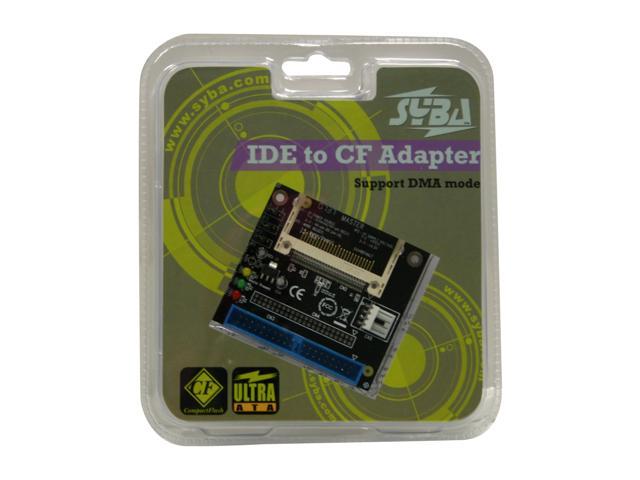 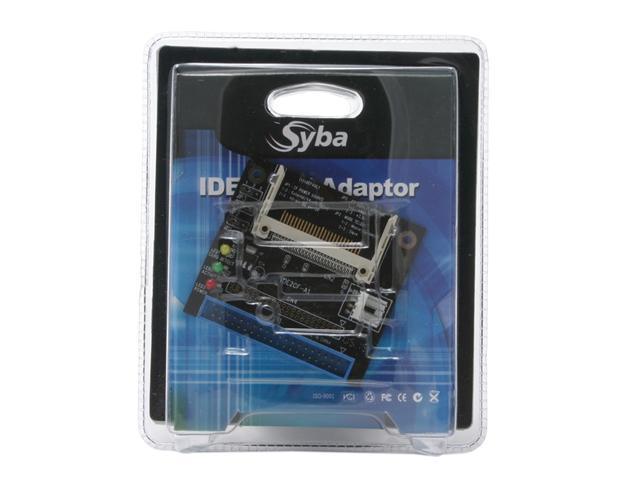 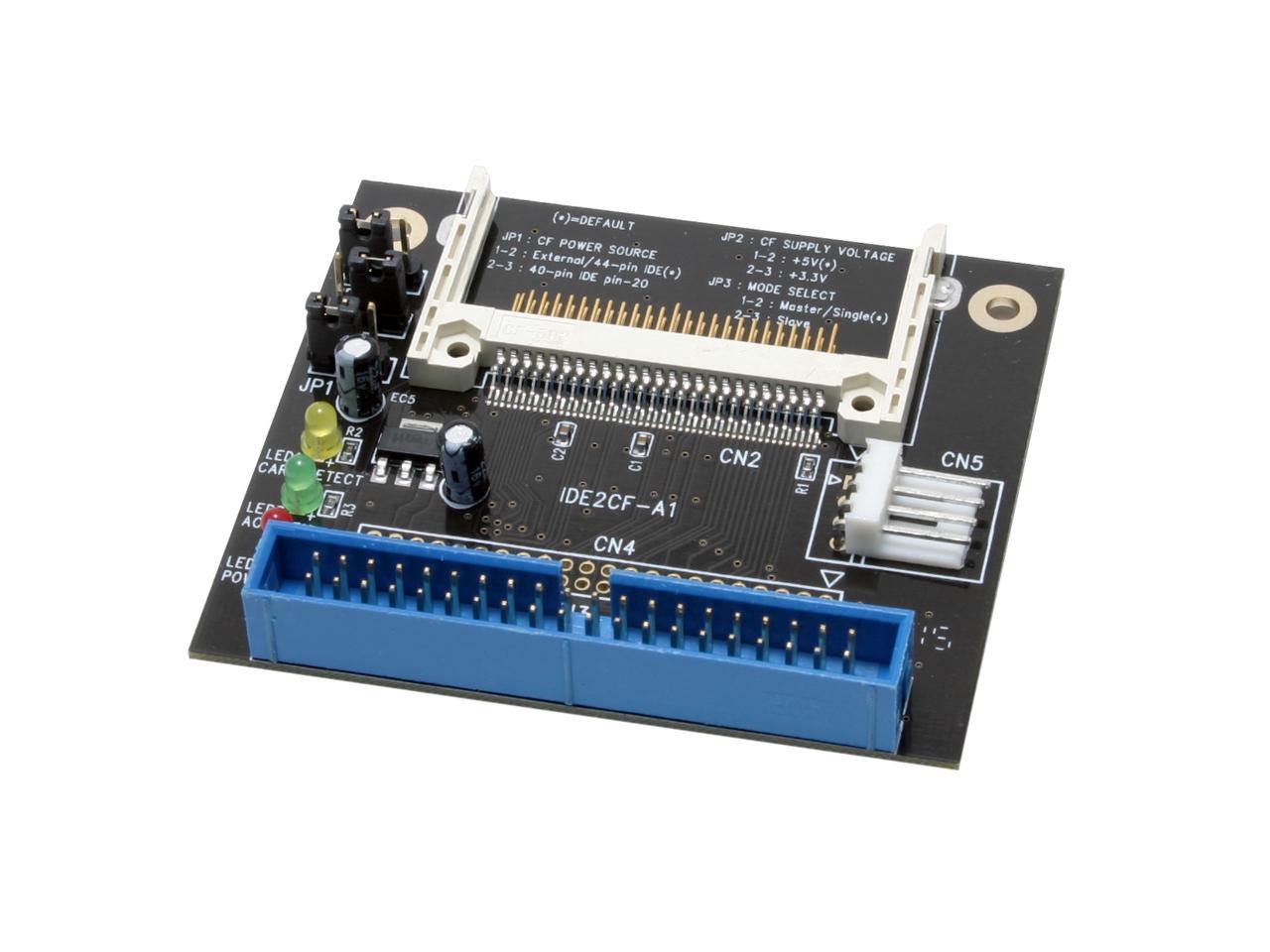 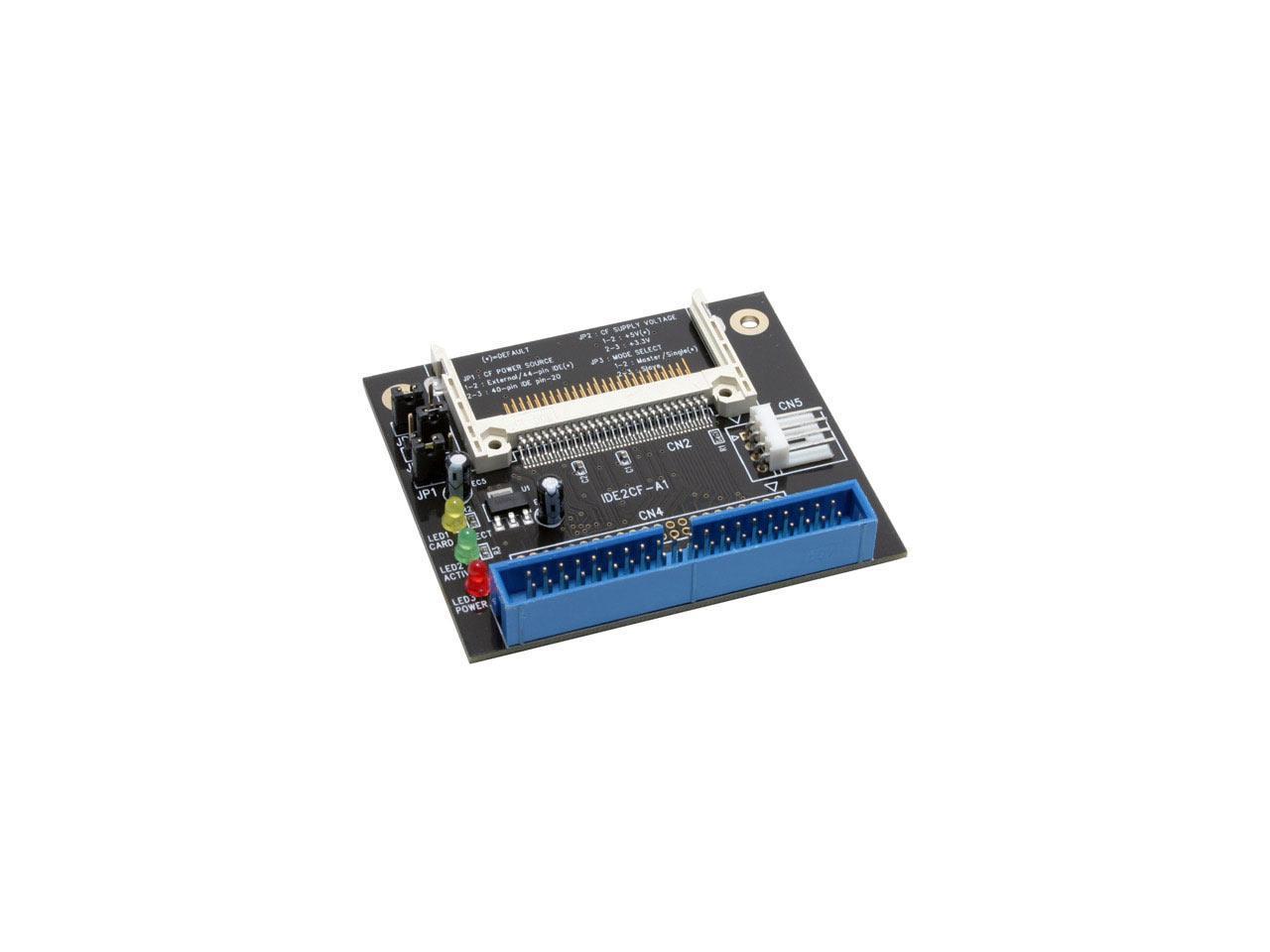 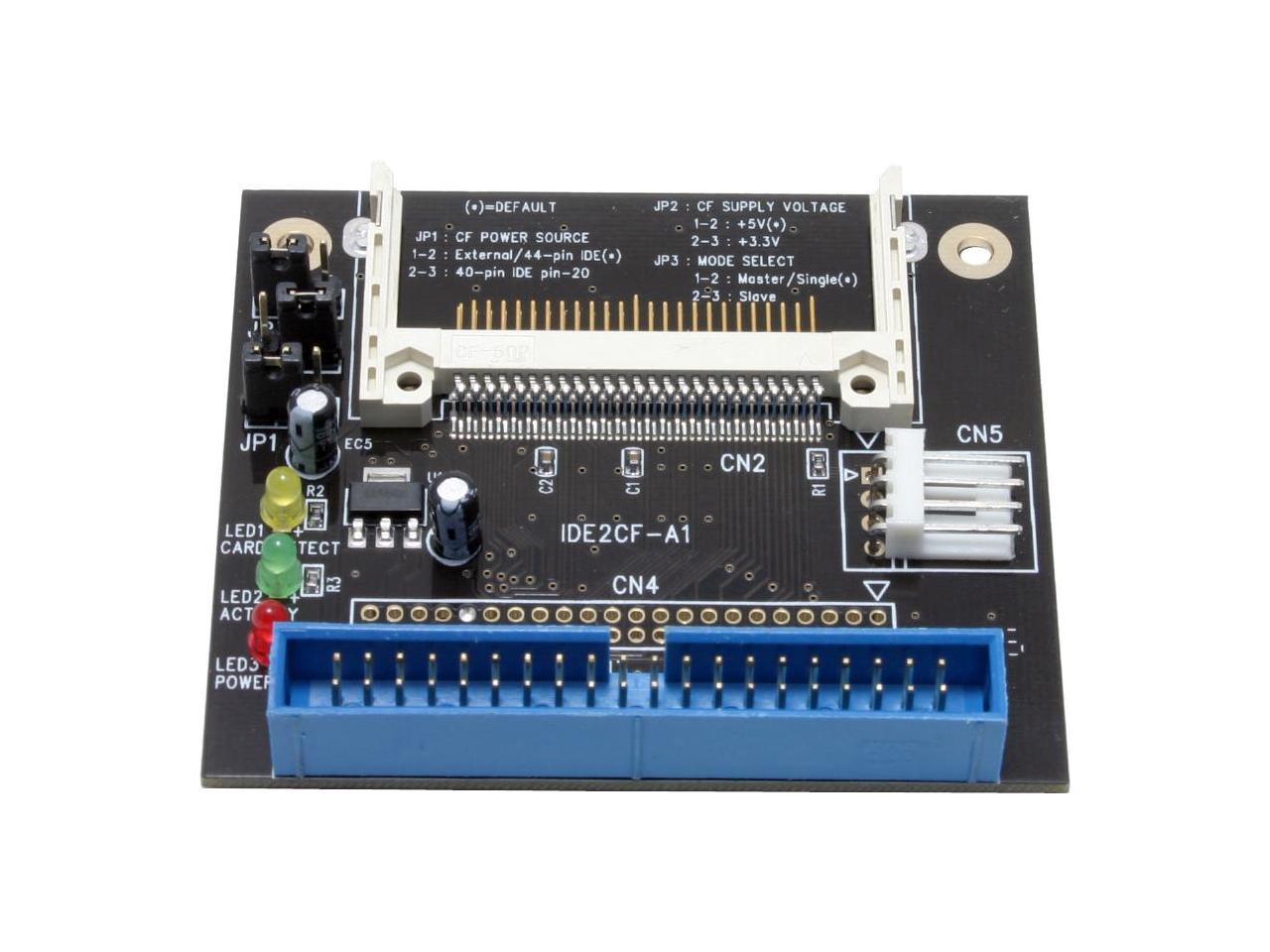 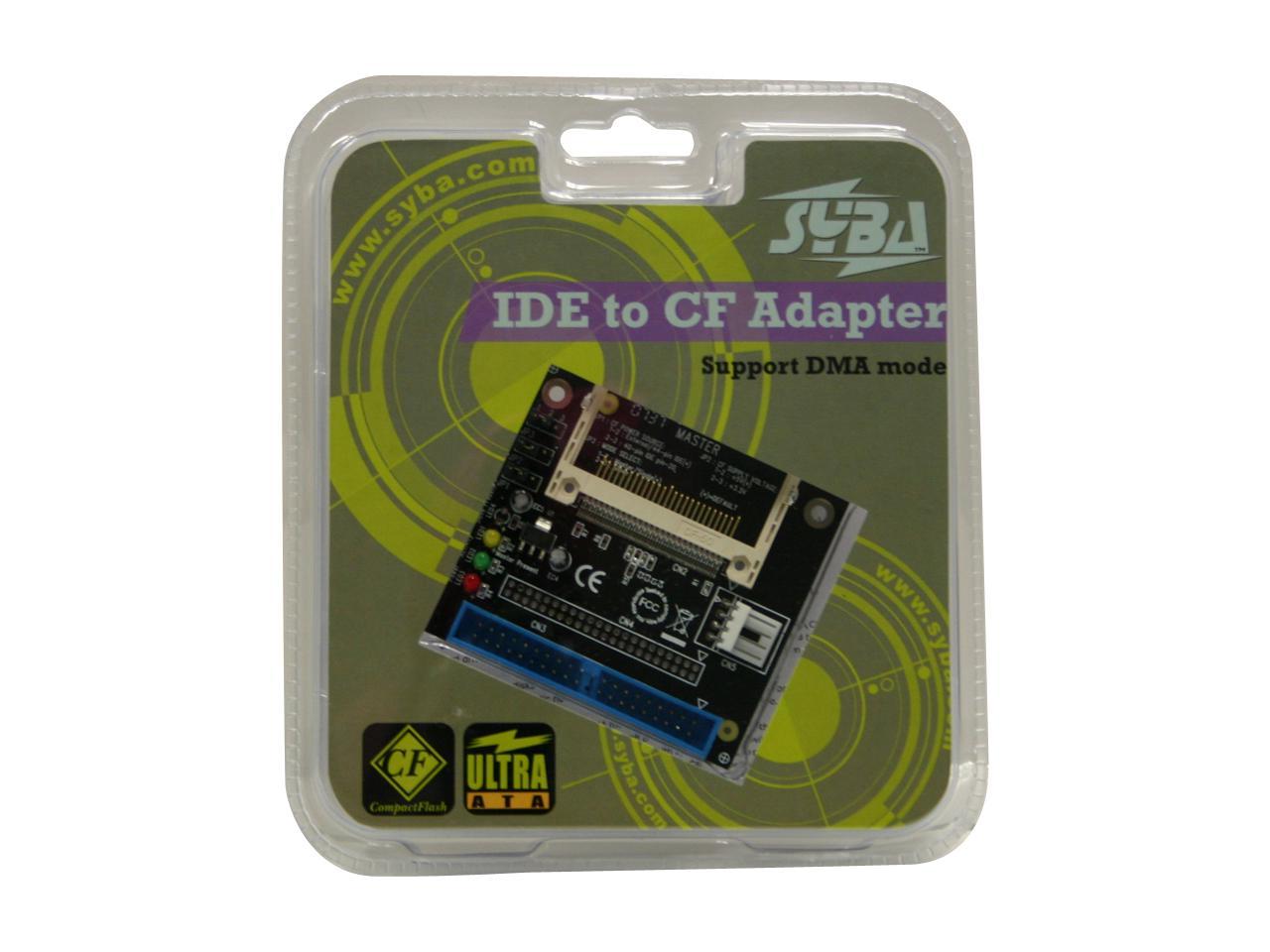 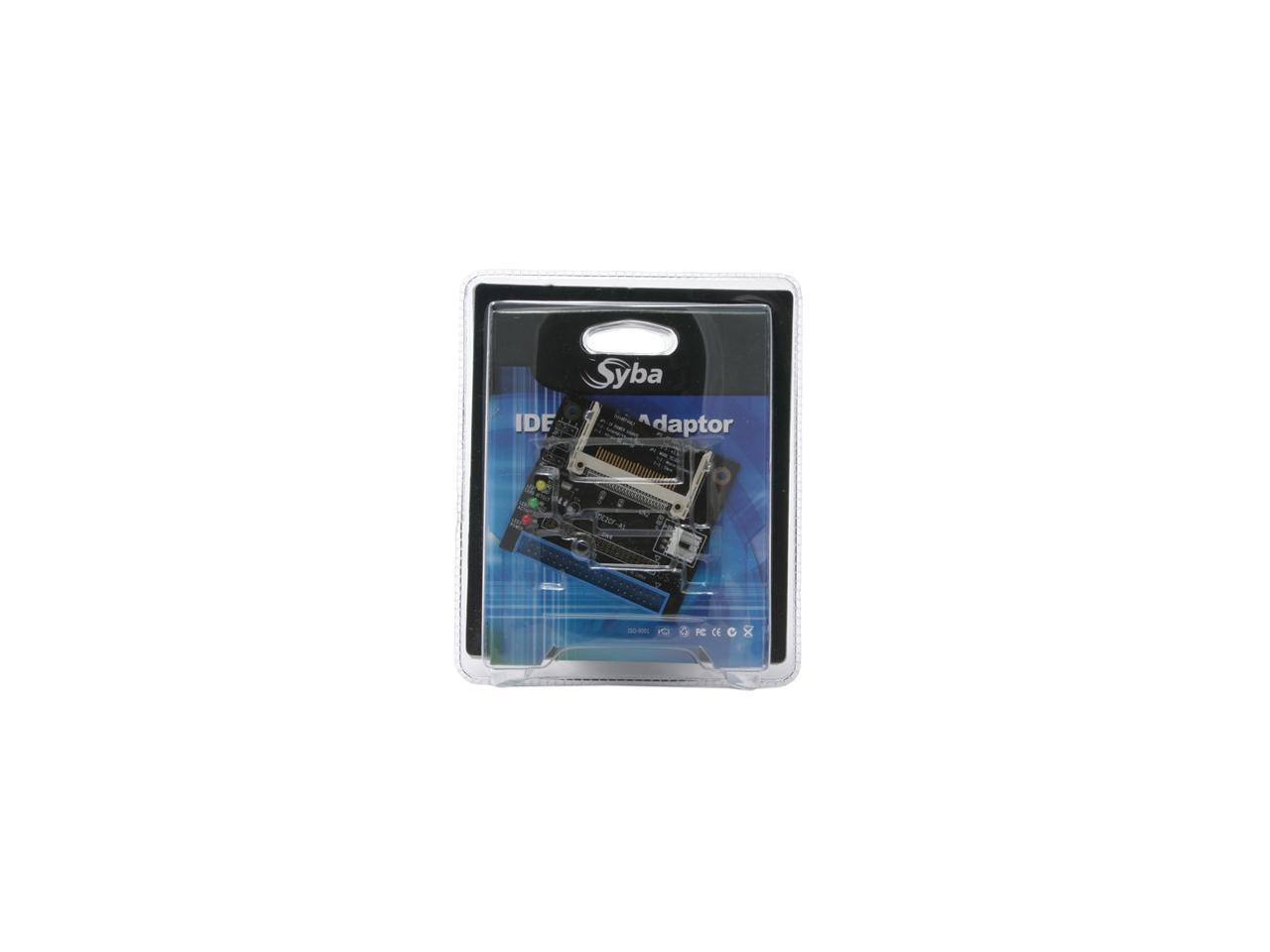 Learn more about the Syba SD-CF-IDE-A

Pros: Works great on new and old motherboards alike, from a vintage Pentium, Socket 7 mobo, to an NVIDIA 680i LGA775 mobo. Solid control over your preferred voltage (3.3v or 5v, with 5v default) and other settings via jumpers. Many CF cards will operate on either voltage, but some want specifically one of the other. It's nice to have control over it. LED for power, CF card present, and IDE activity are nice, including the almost-black coating over the PCB. Looks great in an acrylic case.

Cons: Odd behavior on older IDE controllers with only PIO mode support will stop the secondary IDE channel (or other channel if on secondary) from functioning. It allows another device as a slave, but knocks out the other IDE channel. This doesn't happen on newer motherboards with SATA, only some older motherboards with no SATA. Also, LEDs are a bit bright, and no way to change it. Possibly switch the jumper to 3.3v for the CF *AND* run 3.3v into the floppy connector instead of 5v might help?

Overall Review: Most reviewers are incorrectly stating that it doesn't support UltraDMA. It does support UltraDMA, but only UltraDMA-33 (DMA mode 2, not DMA/UDMA mode 3, 4, 5, or 6). I wish people would do a little research and understand technology before running writing a review which helps no one. Also, this is actually a dual-CF card adapter model from Syba, without the second CF card holder soldered on the back.

Pros: Used with a Transcend 2GB Compact Flash (CF) Flash Card Model TS2GCF133. Booted to BIOS configuration and card was detected correctly the first time. No tweaks needed in a Dell Optiplex GX240 desktop. Stock jumper settings were used, and they worked flawlessly. Silent and uses a fraction of the power of a regular hard drive. Reading and writing speed is as fast as the card and bus can handle!

Cons: The only thing I can nitpick about is the exposed and rather long circuit junctions on the back of the board. You will definitely want to mount this with screws and offsets (using the two provided and grounded holes) or wrap it in non-conductive material. Dangling it uncovered in the case would be a bad idea, especially with smaller cases like mine. There is a built in HDD activity light, but there is no way that I can see to connect it to a case HDD activity light without modding. No big deal, these devices should have very little "HDD" activity anyways.

Overall Review: I installed this with a 2GB Trancend card so I could boot GeeXboX 1.2.3 and for this purpose it works like a charm. Any system that runs in RAM ought to be able to use this, and it won't kill your card due to frequent read/write cycles. Setup was just as easy as the old regular hard drive I was using for testing purposes. By the way, this uses a small floppy power connector so make sure you have one coming from the Power Supply, or use an adapter. This isn't the fault of the adapter, but it probably isn't a good idea to run a modern full sized OS, like Windows XP or something from it. Use a SSD for that. Typical CF cards aren't going to stand up to the abuse for very long. For OS's that run entirely from RAM such as GeeXboX, FreeNAS, etc..., these are perfect!

Pros: Very easy to use, works exactly as advertised! Fast enough for use as a boot drive for my FreeNAS NAS box, which sees very little disk activity.

Cons: Doesn't do UDMA access, but it wasn't advertised as having that capability now was it??

Overall Review: Its not the fastest interface, but it gets the job done admirably, and it worked for me right out of the box! To all those who have been complaining about its lack of speed, read the specifications. This is the slow version. There is also a FASTER version available (that supports UDMA access) for a bit more coin, so don't rate the product down because you can't read. We all know what assumptions make...

Pros: Great and inexpensive way to set up a small solid state drive for FreeNAS OS or other embedded system. My NAS boots way faster with this than it did off the CD and I can remove the optical drive from the system, use less electricity, and use the primary IDE channel for 2 more hard drives.

Cons: Loading the OS was a little slow, but that has more to do with the particular CF card I used than it does with the adapter. The card is a little flimsy, so don't put too much force on it or it could break.

Overall Review: The mounting holes are exactly the same distance apart as the side mounting holes for a HDD. I used 2 motherboard stand-offs bolted into the side of my HDD so that the board would have a good ground and also wouldn't short out on anything.

Pros: Plugged it in and it works. Using for a m0n0wall box made from an old Dell gx50 SFF. Works well in Linux also. It's been in use for 2 weeks now, no problems.

Cons: Tranfer speed is not very fast, but what did you expect?

Pros: Per description: cheap way to create a CF IDE drive. Have gone thru a "shot in the dark" CF card (Kingston), then a researched card (Transcend) that was said to work...FreeNAS still crashed on DMA even though CF Spec said support was there. Other Pro is NewEgg is good with RMA (as compared to DMA). I'm still not up with a working CF IDE boot though.

Cons: SYBA doc says it supports CF type I, II and Micro. They lie. It would be a great idea for them (or NewEgg) to list the CFs that do work. Transcend has a PIO CF but NewEgg doesn't have it in stock. A-Data CF shows PIO and DMA - That is my next try.

Overall Review: Costly in my time to figure this one out. A few simple pieces of info would save lot's of time for people trying to get a CF IDE boot going.

Pros: Small, cheap and works with all my CF cards.

Overall Review: For everyone having issues with that one pin, just cut it off on the CF adapter. Granted, returns and warranties go out the window but the lack of that pin is mostly used to help key the orientation of the ide.