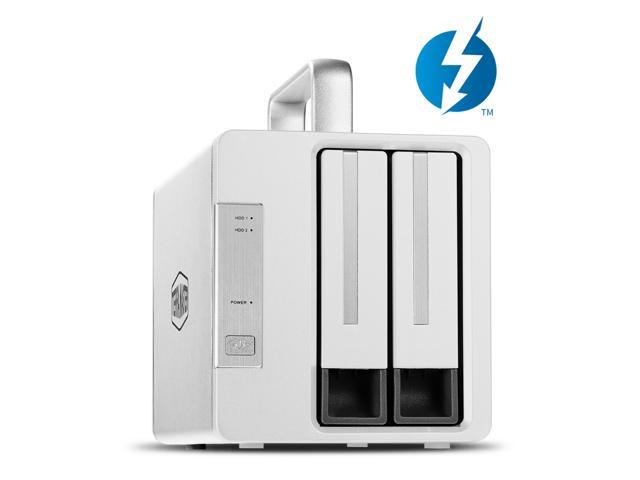 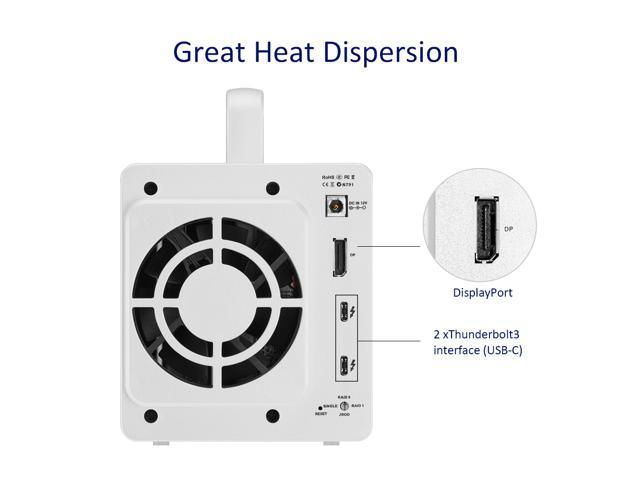 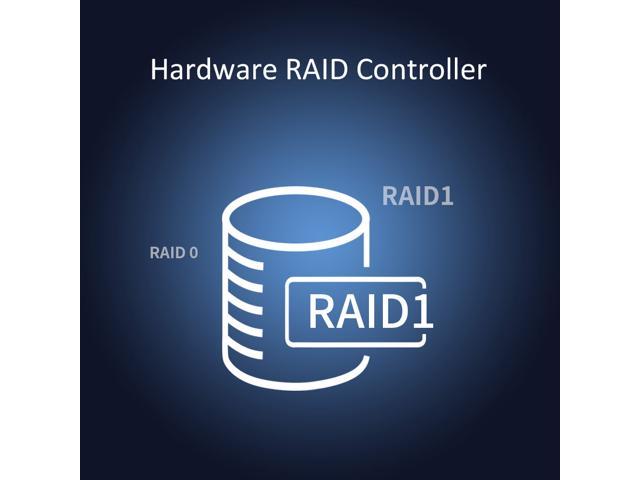 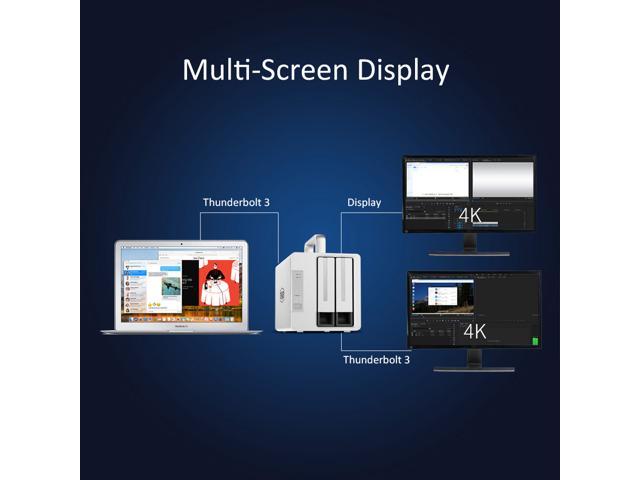 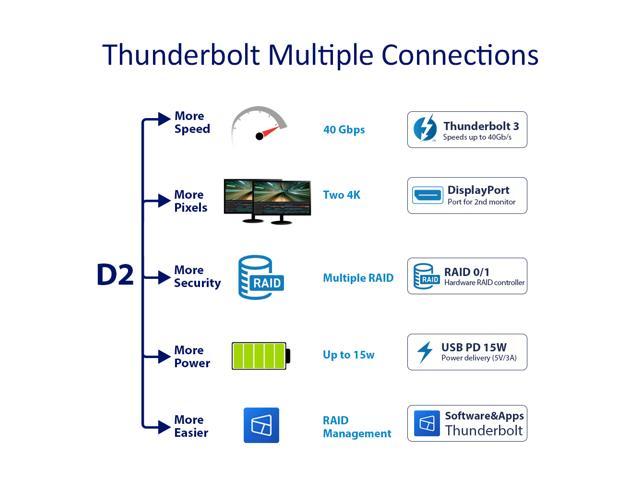 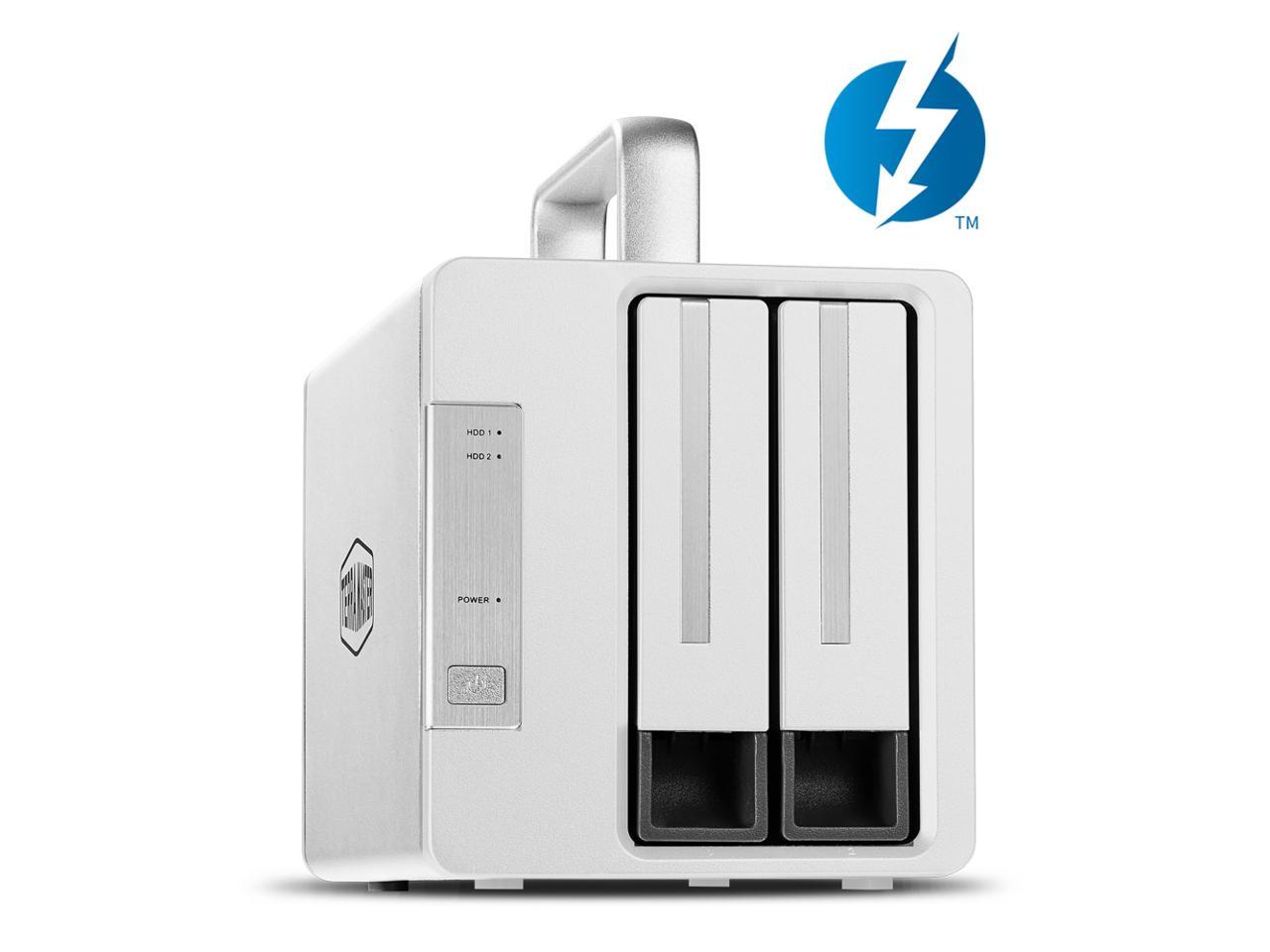 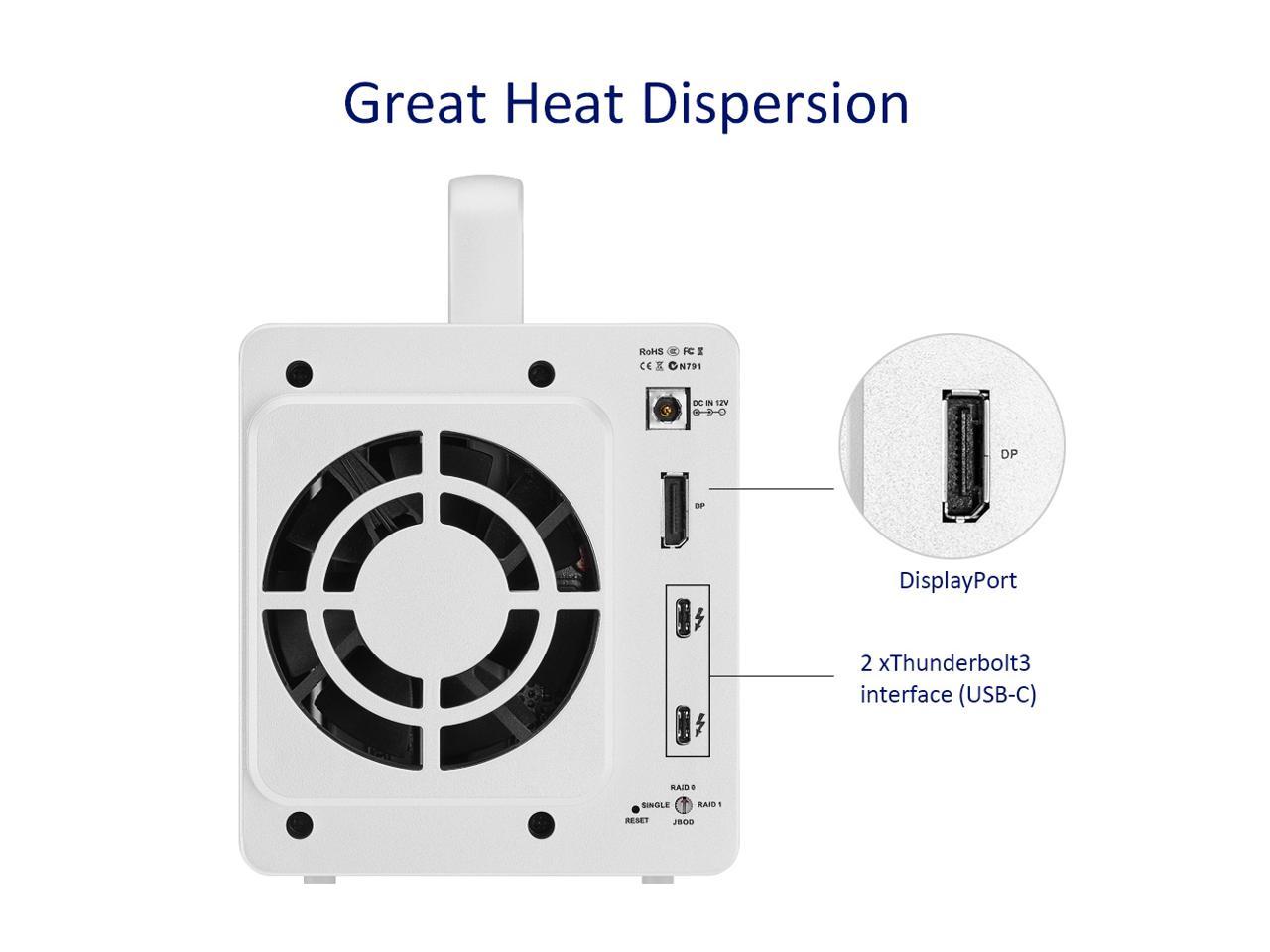 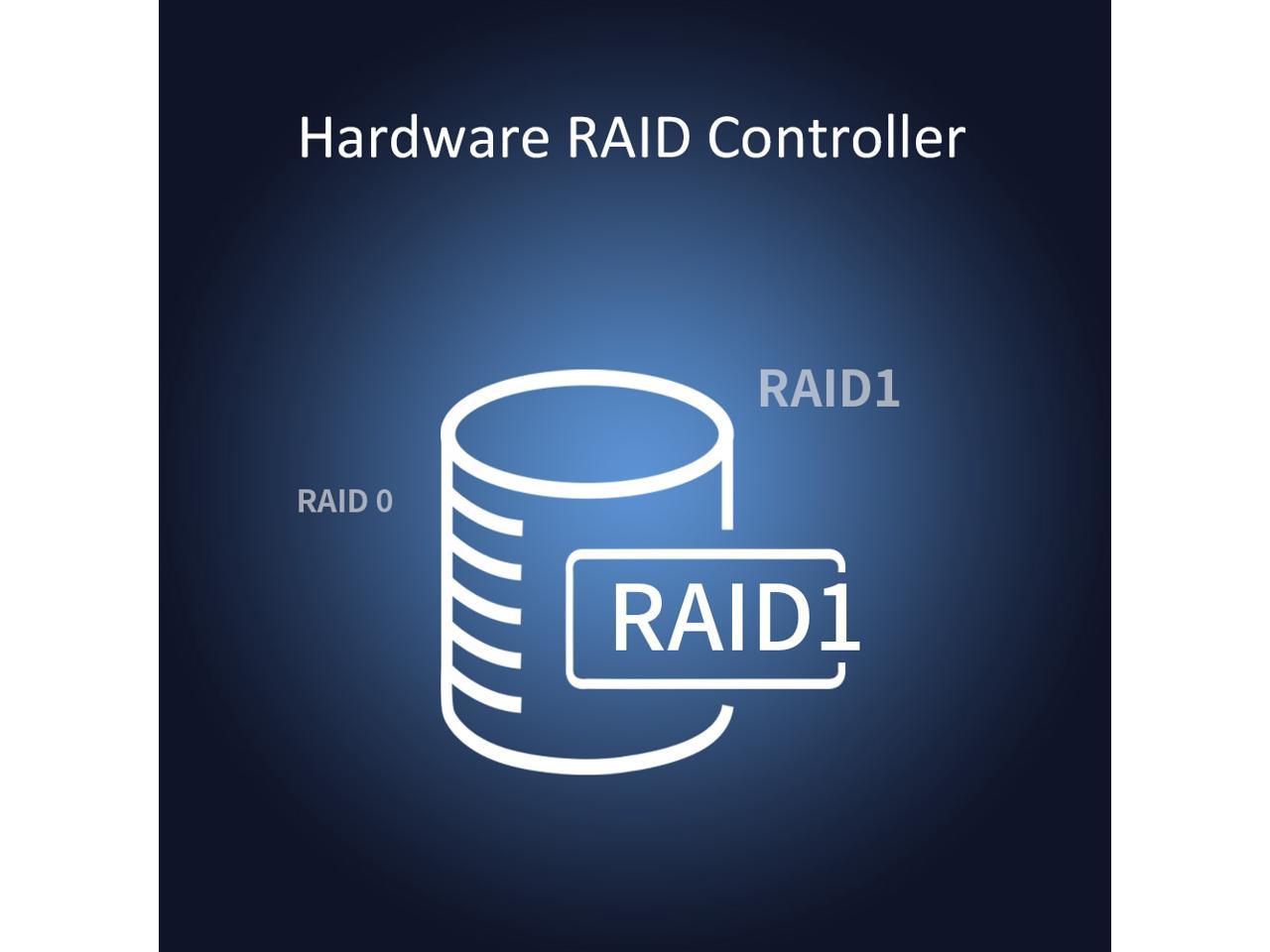 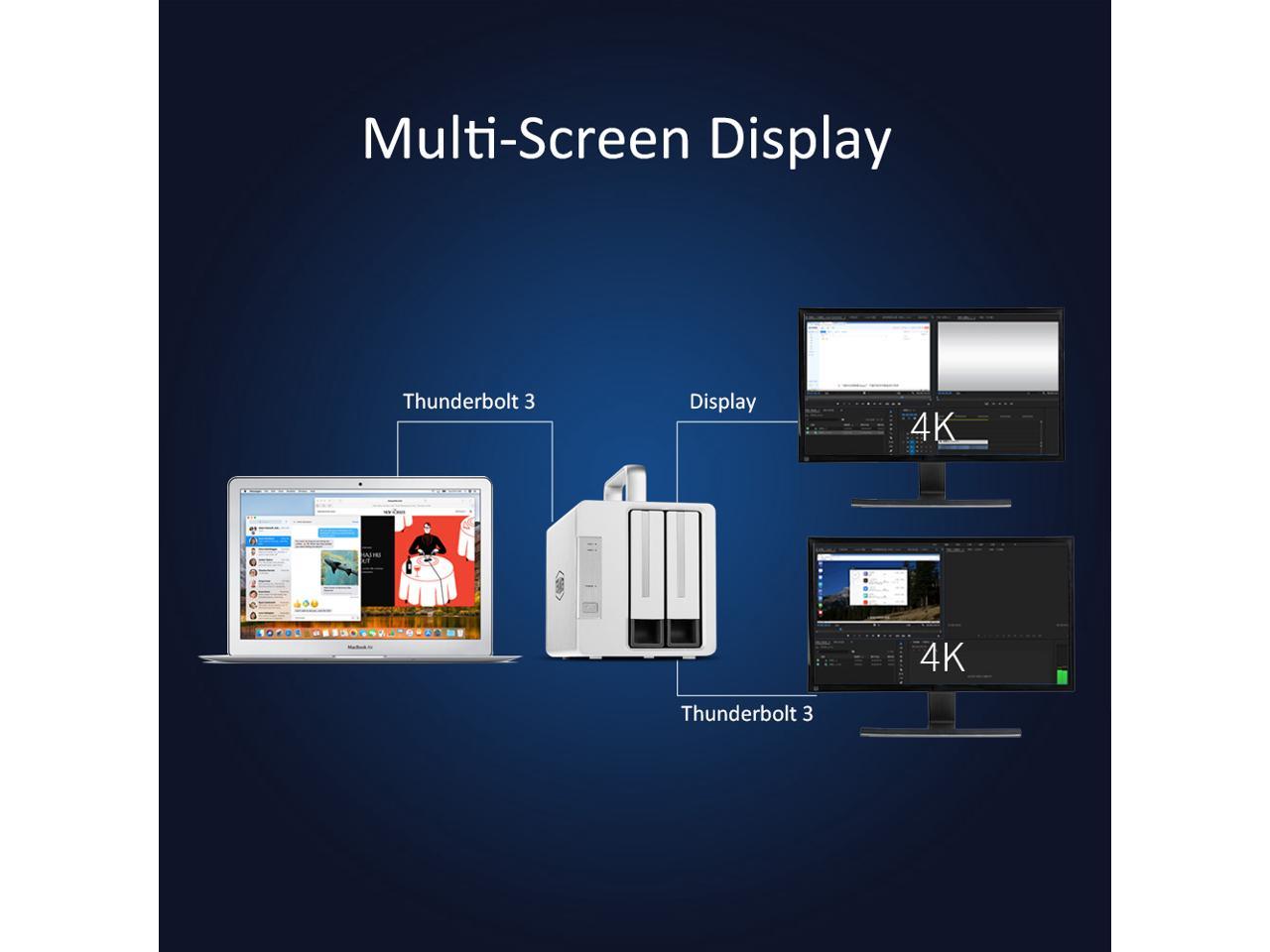 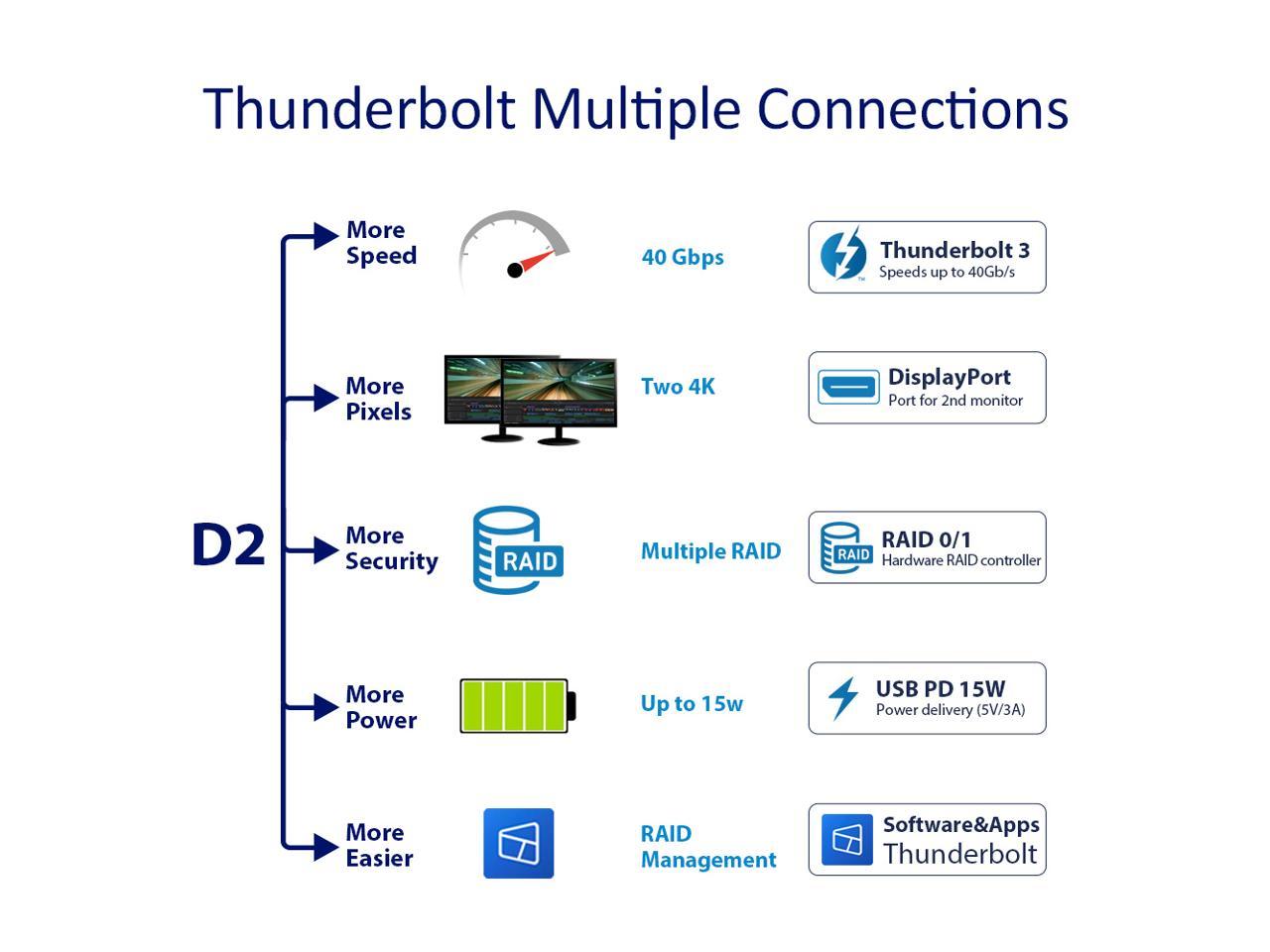 The 2-bay D2 Thunderbolt 3 is compatible with both 3.5" SATA disks and 2.5" SSDs, offering a professional solution to on-the-go storage with a total storage capacity of up to 28TB, which represents around two million HD images or up to 80 hours of 4K video. The D2 Thunderbolt 3 is also equipped with a special handle for additional portability, allowing it to be easily transported for video recording, video copying, and video demos wherever they are needed. Drawing on a pair of Thunderbolt 3 interfaces (40 Gbps) and a hardware RAID controller, the D2 Thunderbolt 3 can operate at reading speeds of 760 MB/s (SSD x 2, RAID 0). The time needed for virtually every aspect of the post-production workflow falls when using the D2 Thunderbolt 3. At lightning speed, users can transfer several hours of footage from a Blackmagic® device to Adobe® Premiere Pro. In turn, with uncompressed HD 10-bit and 12-bit video, users can edit the ProRes 422 (HQ), ProRes 4444 XQ, and other data streams. Thumbnails and preview rendering are significantly more responsive when using large items with numerous high-definition clips. Using one cable, Thunderbolt 3 enables users to daisy-chain more than five devices to their computer. As a result, users can achieve an enormous 168TB capacity by linking together six D2 Thunderbolt 3 devices. Perfectly Suited for the Most Demanding Video Professionals Boost Up Performance by Hardware RAID

The D2 Thunderbolt 3 operates with RAID 0, 1, and JBOD as well as in single disk array modes for all your application needs. This underpins the all-important concern for guaranteed data security, and it ensures that your storage capacity is utilized in the most efficient way possible. TerraMaster has made no compromises in its use of state-of-the-art storage technologies, ensuring data safety and security. The D2 Thunderbolt 3 supports hot swapping and hot plugging. An automatic RAID rebuild and an auto idle mode also prevent concerns about inadequately protected data, allowing users to focus on what matters to them: the images. The Ideal Companion for All Professionals

Given its compactness, its large storage capacity, and its lightning speed, the D2 Thunderbolt 3 is ideally suited for the most demanding applications, including 4K video editing, as well as seamless 4K streaming. Other users, especially those with strict speed and storage requirements, will find a valuable partner in this device.

As D2 thunderbolt 3 adopts an aluminum-ally shell and low-noise fans, it is solid and reliable with good heat dissipation and low noise. Due to the use of removable hard drive tray, it is easy to install the hard drive that also supports hot swap. Software RAID will consume a lot of resources on your computer system, which will affect the efficiency of your other tasks. At the same time, an unexpected power outage will put a huge risk of data corruption on the software array being backed up. The D5 Thunderbolt 3 features professional-grade hardware RAID and on-board flash memory to provide faster, more efficient backup and restore capabilities, enhance your performance and provide extra fail-safes.

Pros: I've been super impressed with this unit. I have it set up in RAID 5 and have been running a project off of it for over a year with very few issues. I have not had to rebuild any drives (fingers crossed) so I cannot speak to how the unit performs during that type of operation.

Cons: Sometimes it has a little trouble turning on and mounting, but this has never lasted more than 5 minutes or so. The drive bays can open when being handled and TSA has definitely almost broken the latches when inspecting it in the airport security line. I've used this array with Paragon's NTFS software for Mac OS and that doesn't always work properly, but to be expected you shouldn't ever use that kind of drive read/write software except to copy a project over to another drive format.

1 out of 1 people found this review helpful. Did you?
Dallen H.
Ownership: 1 month to 1 year
Verified Owner
Support is terrible. Email only and they just stopped responding5/1/2019 10:06:44 AM

Pros: I have a very expensive brick of a device that just simply does not work. Software included does not install properly and without it the device is useless. Latest version of Windows 10 Pro. Latest Bios, proper drivers installed and confirmed, i9, M.2 1tb ssd, 64gb ram, 2080Ti. Gigabyte Mobo. After confirming all these things support just stopped responding to emails. Need to RMA this device.

Cons: All of it Stay very far away.