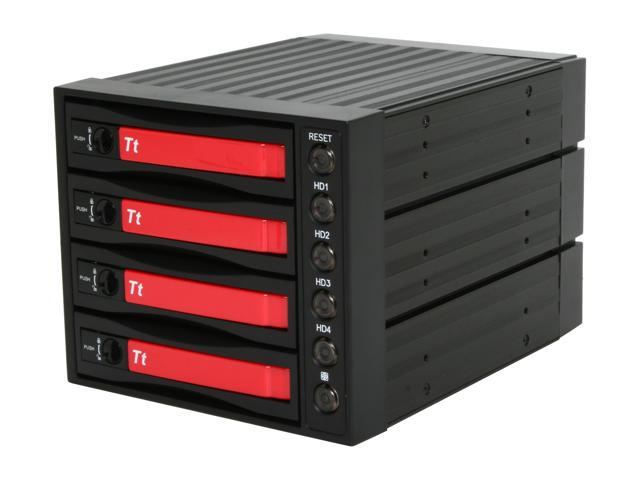 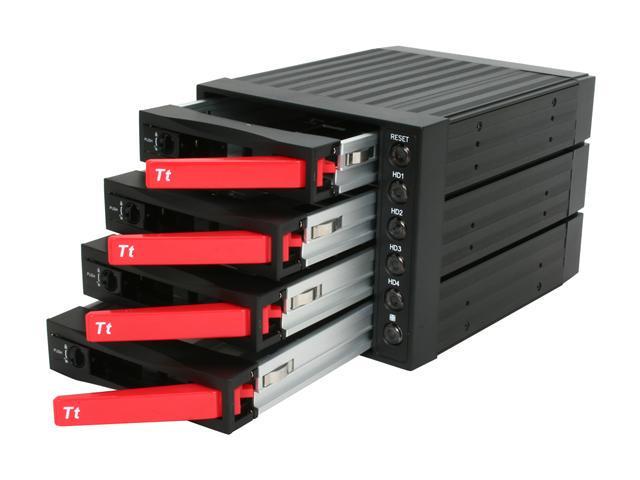 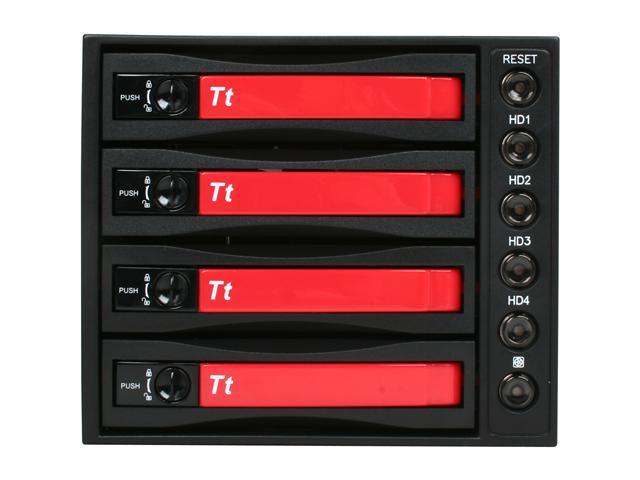 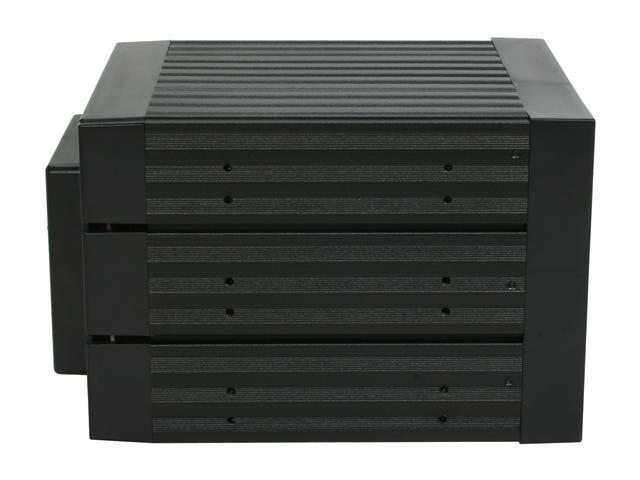 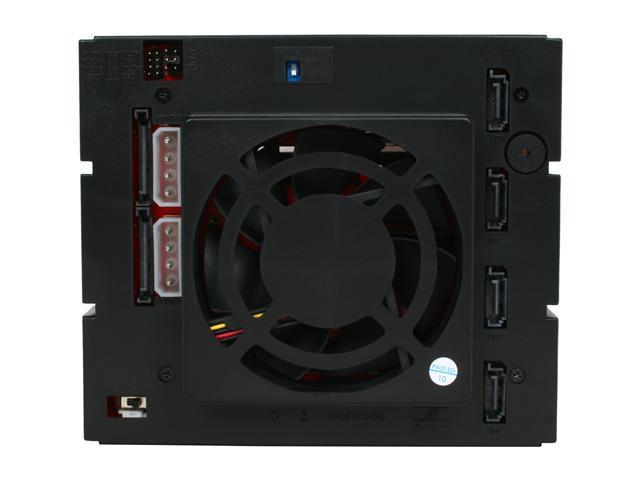 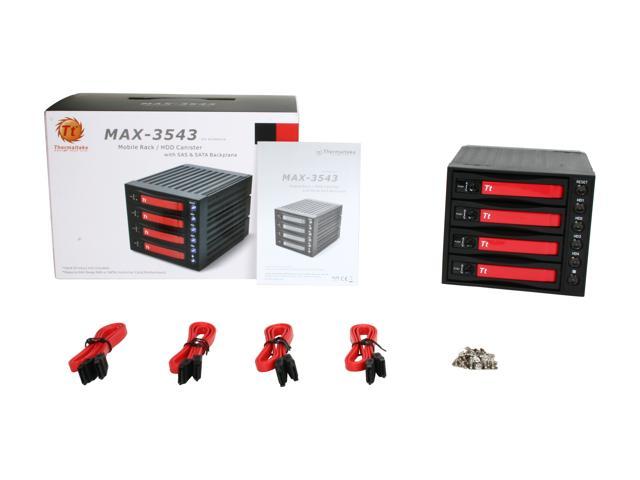 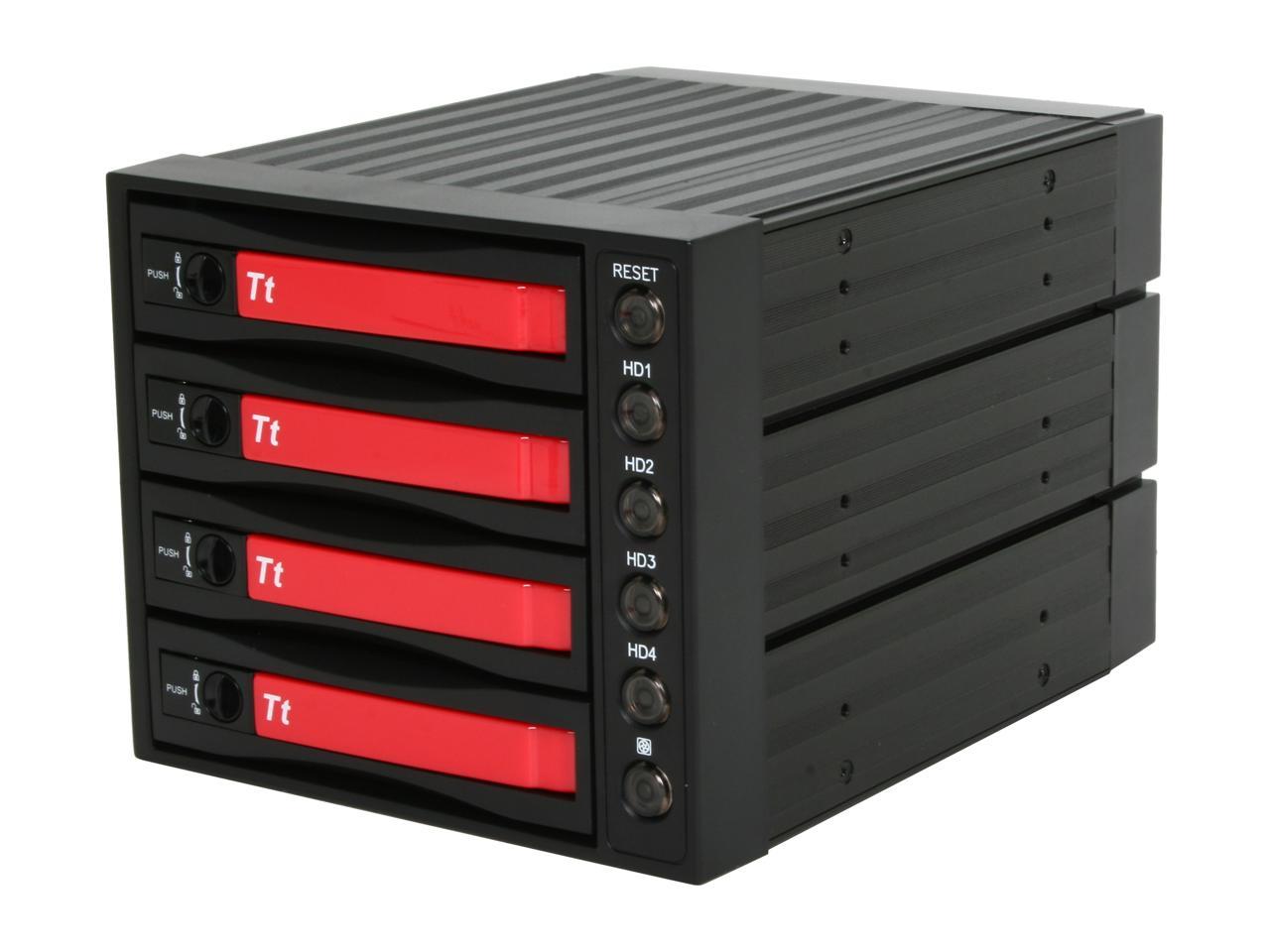 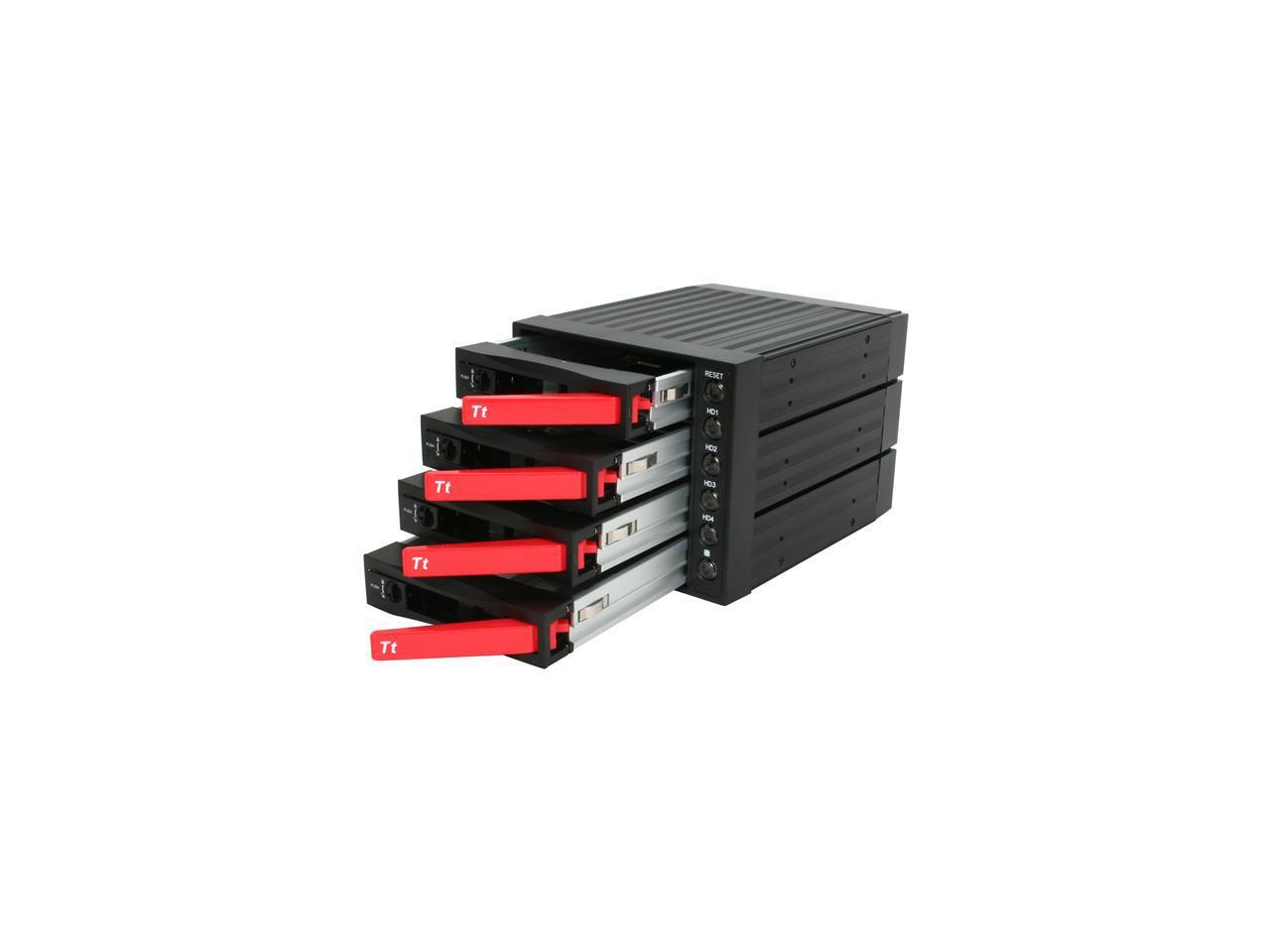 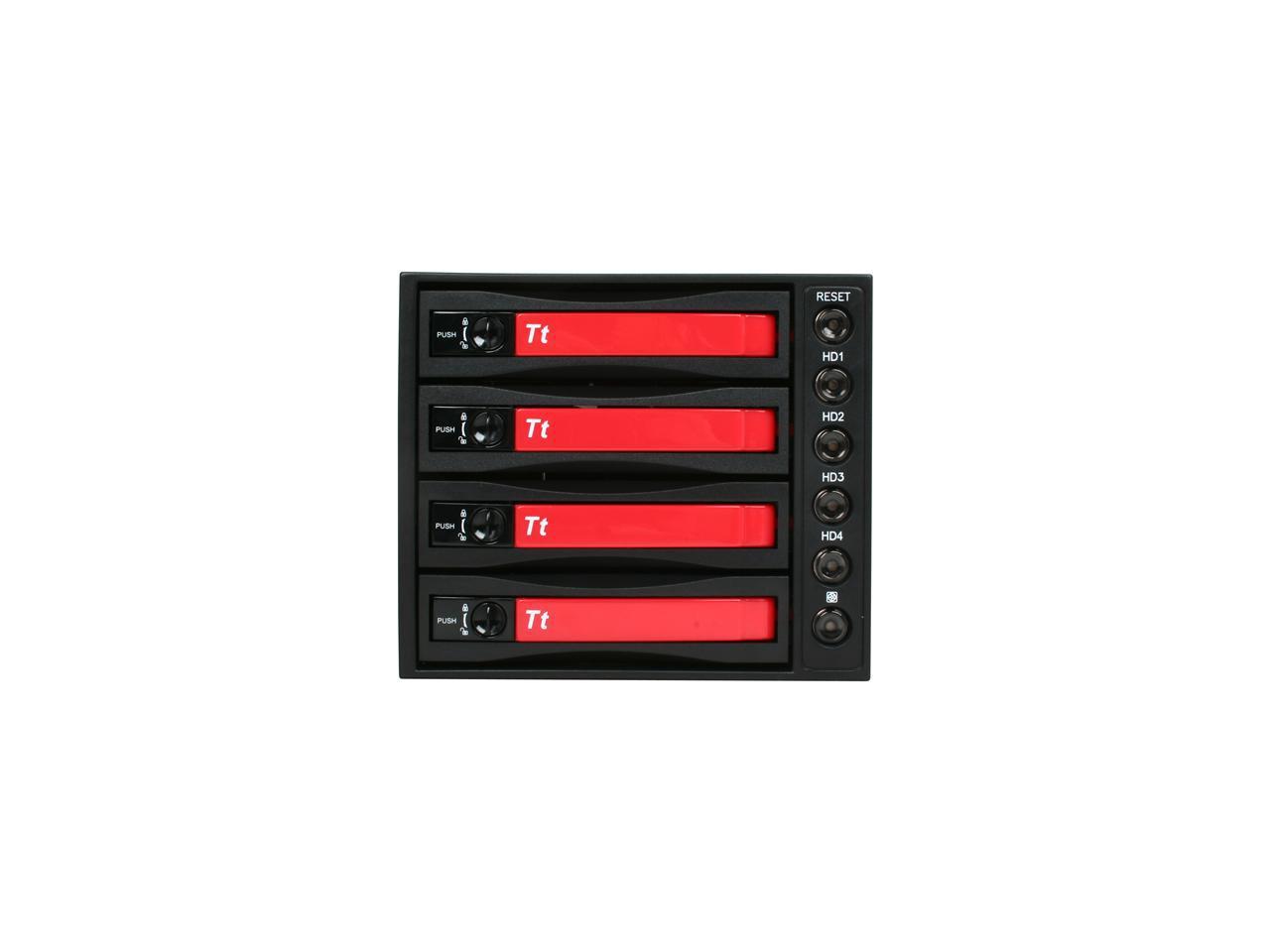 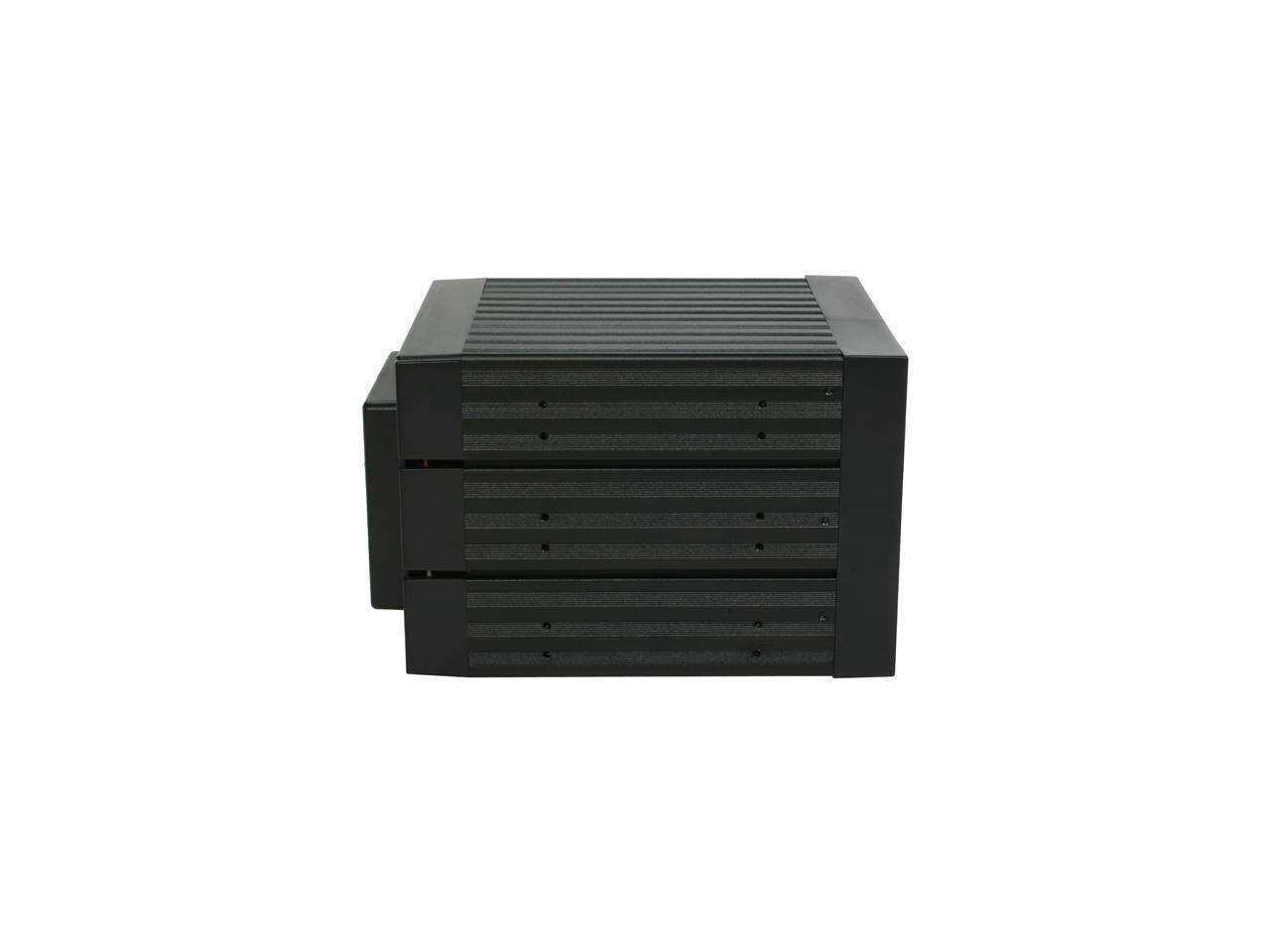 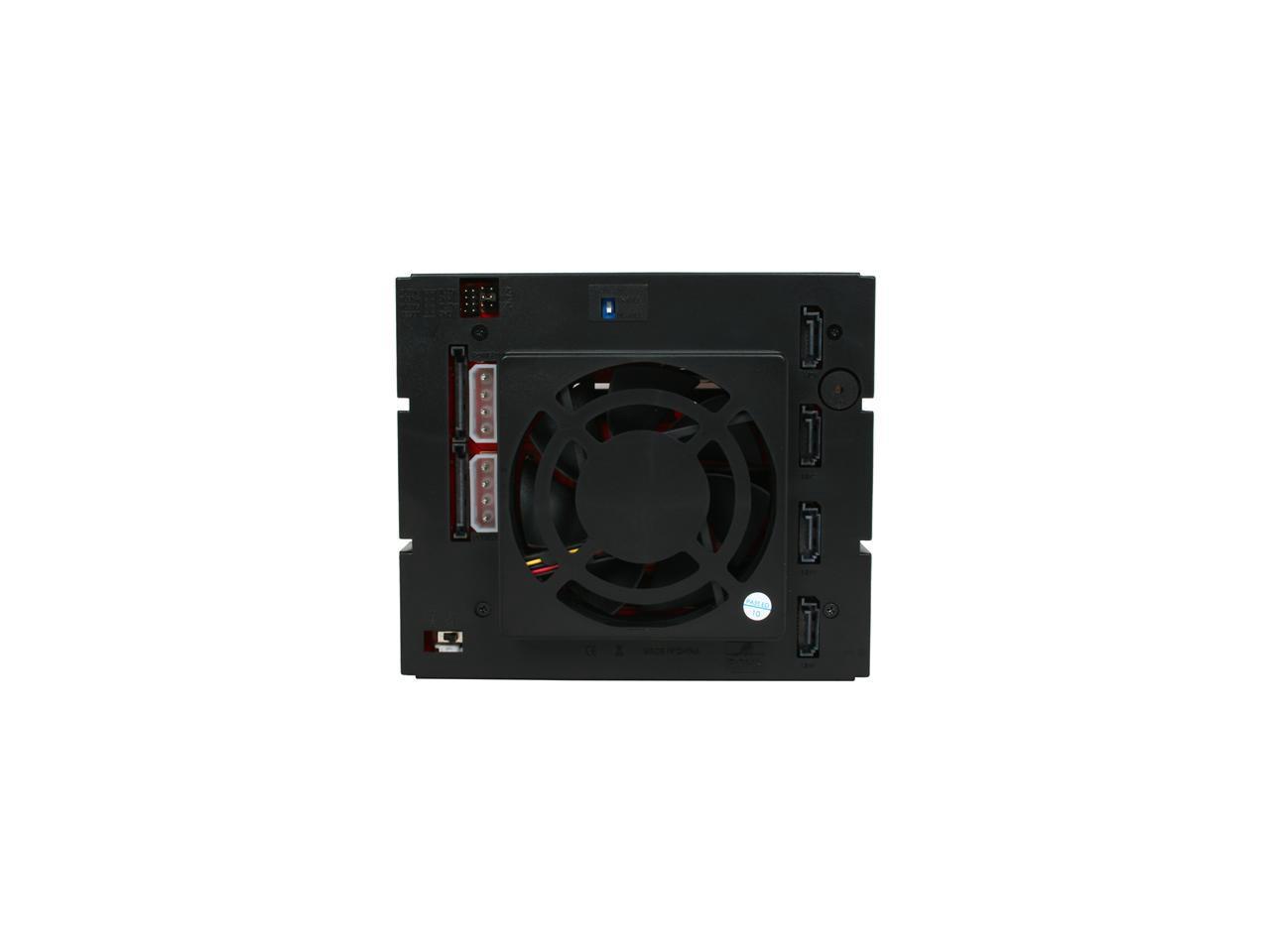 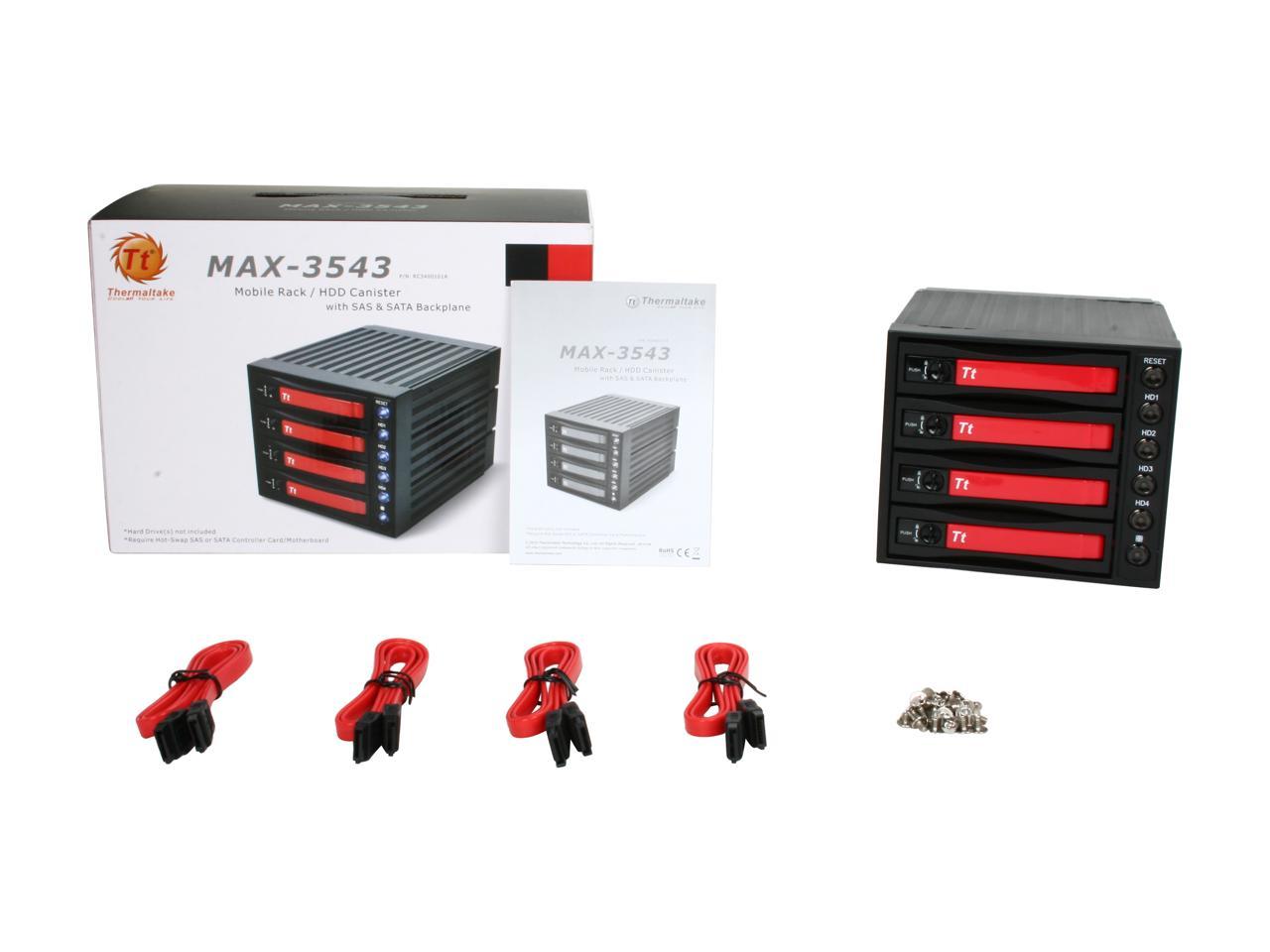 Learn more about the Thermaltake RC3400101A

Pros: The unit is made from both stamped steel, aluminum and plastic. While the plastic does feel thin in a few areas it does not take away from the functionality nor does it cause the unit to have any issues. I have the unit filled with 4 X 2TB Hitachi drives and the drives run at 82*F during typical operations. This is actually cooler than the other disks in my computer and the fan is on the 'low' setting. As the description shows each tray has its own power on/off switch, power/drive activity LED, and has the ability to ensure the tray stays put (they call it a lock). All four drives are powered by either 2 X molex connectors OR 2 X SATA connectors, you do not hook up both. Normal molex connectors fit without modification and power the unit without issues. The fan is quieter than the others in my case and moves plenty of air to keep the drives cool. I have this hooked up to a 3ware RAID controller and there are no problems passing through the unit.

Cons: The tray locks are not REAL locks so you cannot prevent someone from turning the lock and opening the tray. Some computer cases will require modification to the 5.25" bays in order for this to fit correctly.

Overall Review: This is the same basic unit as the AMS DS-3141SSBK sold by new egg except it has different colors/front face design on the trays. The lights for each individual tray are very bright and light up my entire server room, keep this in mind if you are going to put the unit in your bedroom or entertainment center. I would purchase this product again without hesitation.

Pros: I purchased this unit to relocate the hard drives from the base of my case to the unused 5.25" bays. This way I would have room for SLI and better air flow. It is also nice to be able to install hard drives without taking my case apart. This unit does its job very well. It supports 2.5" and 3.5" drives. It looks decent and although it has a little more plastic than I would like, it seems solid enough for home use. The whole thing comes apart with a few screws and is very easy to modify.

Cons: One review I read compared the LED lights to a welding arc. I've almost went to get my welding mask after firing this puppy up! It is bright and you can't turn them off (the LED on/off switch only is for hard drive activity). The fan is also very loud. I am running a Lian Li case with two stock fans along side a Corsair H80 on low (4 120mm fans total plus GPU, PSU, and Memory Cooler fans). My case is by no means quite, but this is the loudest thing in there (on low). It also kind of resonates through the case. The actual face of the unit is smaller than the bay openings causing a 3mm gap. It is also made in China.

Overall Review: Overall this unit works as advertised, but between the super bright lights, the fan noise, and being made in China I almost certainly would have returned it. I found after taking it apart that all the LEDs were removable (each had its own connector). I took them all out and also ordered a 80mm SilenX fan that will run around 14 DBA vs 28.5 on the stock fan (on low). When I have time I will wire in some more reasonable LEDs. With these modifications this will be a good unit is worth keeping. However the price is a little high for the quality. I was expecting a bit more for the money.

Pros: its DISCONTINUED, can thing of any pros on this piece of harware

Cons: - one of my lock buttons came off the very first day - lights are so bright it doesnt even make sense ( turn off the room light and the LED alone can light up your room) - fan is noisy (took it apart and swap it was a noctua fan) - the bay is not convenient, you need screws to hold the hdd on the bay. dont lose the screws because i dont think you can find them anywhere (another bag of screws i have to keep in my drawer) - paid a hundred dollars for this piece of hardware with so much issues (not worth the money)

Overall Review: i will never buy another TT product.

Pros: Love how well built this thing is. I don't really care where the product is manufactured but as long as it doesn't break apart on me. Other posters saying the products made is China isn't well crafted is absolutely absurd. Every country makes some good things. On to this product, very sturdy. Converted a 3 bay into 4 hard drive slots. The LEDs might be a bit bright but they don't bother me as they go in my IT room. Hotswappable is good. WOW

Overall Review: i don't leave anything less than a 2star unless the product is absolutely nonfunctional. If the product really wow me, I will indicate as such.

Pros: Allows for an extra hard drive in 3 bays. Hotswap available if connected to a raid controller. Pretty stable construction.

Cons: The first one that I bought was fine, but the 2nd and 3rd had some of the LEDS that didn't light up, but all functionality is there. LEDS are bright.

Overall Review: I took some .99 spray paint and put 3 light coats over the LED lights and make a nice soft glow. I bought my first one to try in my case and it worked well, so I bought 2 more and have 12 hard drive slots. Works well with the Antec 1200 case.

Pros: * Allows you to convert a 3 bay space (3 HD's usually) comfortably into a 4 HD fitment/space. * Swapping drives is easy with the trays provided * Lock mechanism on each drive bay to allow for long term drive installations (boot drive) * LED indicator on each drive bay * LED doubles as the on/off for each bay allowing each drive to be managed separately. * Package comes with all necessary pieces including screws and sata cables * Fan on the rear of the enclosure keeps harddrives cool and is quiet.

Cons: * Each bay has a red plastic lever to slide/lock each bay. This on first glance doesn't seem like a problem, but over time and with multiple uses I can foresee this being an issue for the heavy handed. A proper replacement or product would be aluminum levers on each bay. * The LED lights on the enclosure front are bright. Very bright for a bedroom or office space. However there does seem to be a on / off switch in the rear of the enclosure for this. It would be nice to have them dim while idle and an option to brighten them up during disk activity.

Overall Review: This is an excellent enclosure and fits well with my antec 900 case. The pro's definitely outweigh the cons and I am placing an order for a second one soon. At $114 this is a bit expensive, but it is good quality and gets the job done. specs: gigabyte p55a-ud3 rev2 and antec 900 gen 1 case.

Cons: If the red and black color is all you are looking for then this item is for you. After examining the item: 1) Tray system is loose after install 2) Tray open/close bracket is horribly designed 3) The locking system is equally bad 4) HD GB capacity is low 5) Mounting screws are too short 6) Overpriced by $50

Overall Review: It seemed like everything was nickel and dimed from the start, I don't know how someone could stand behind the quality of this item.

Pros: 4 Hard Drives in 3x 5.25 spots. Everything seems secure. Also i have 3x 3TB Drives in there right now running on unRAID without issue.

Cons: The LED lights are pretty bright. Everything is plastic.