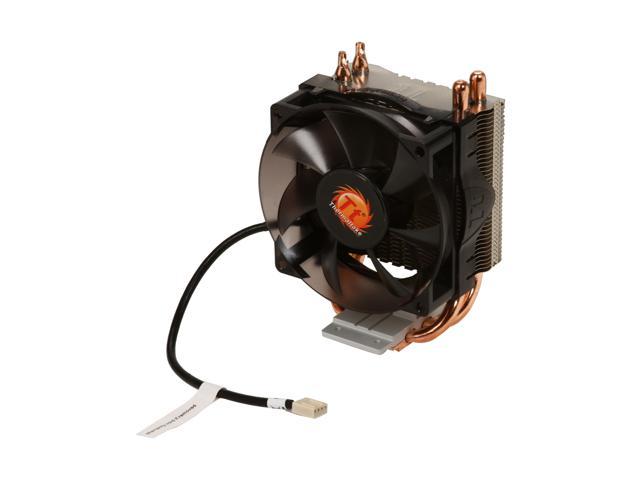 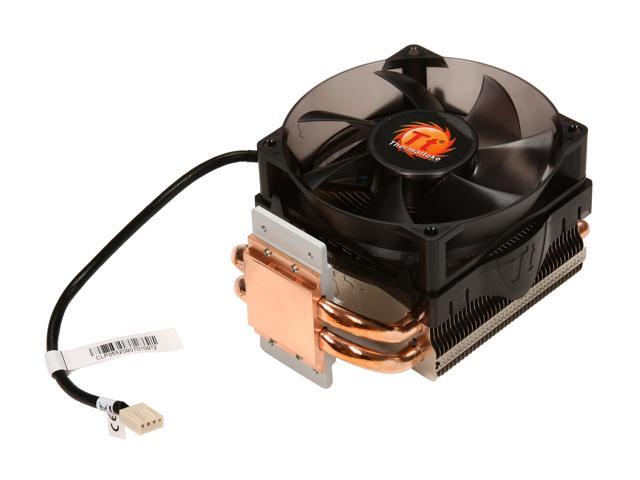 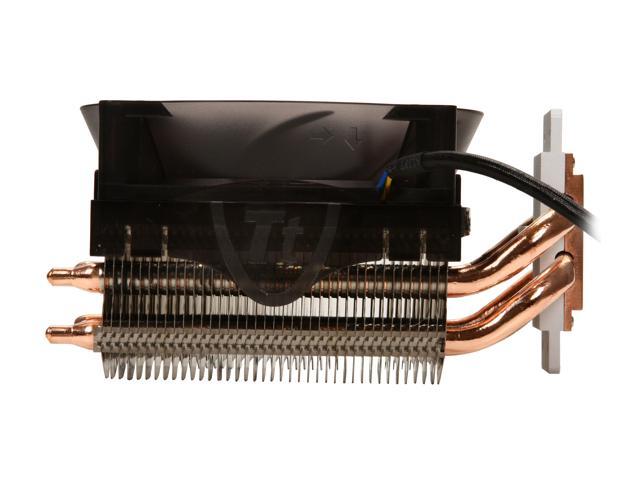 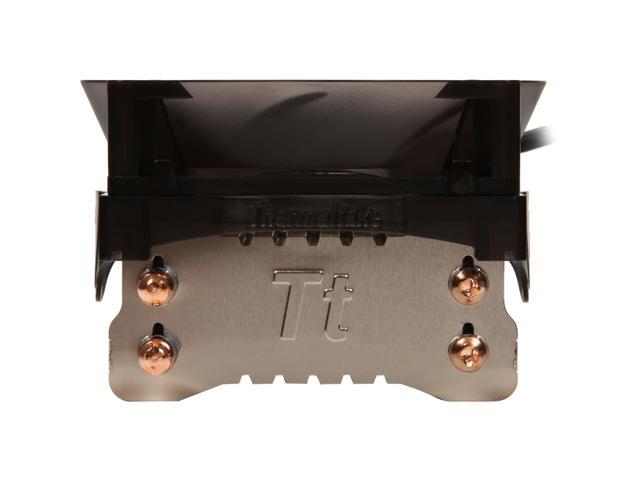 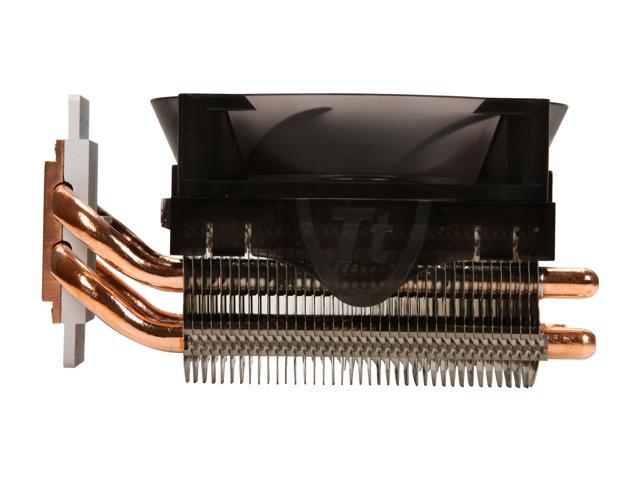 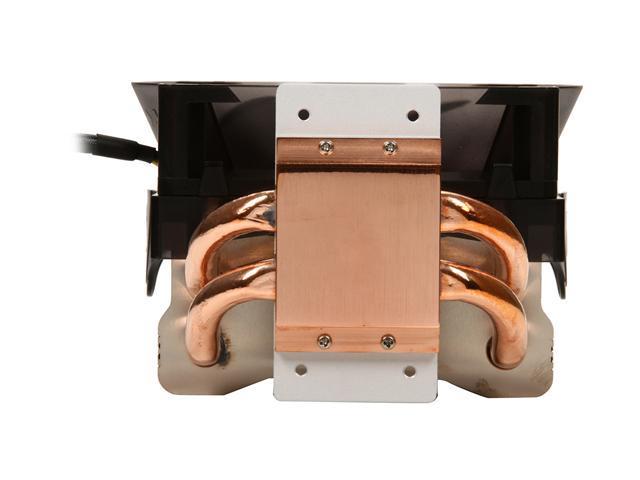 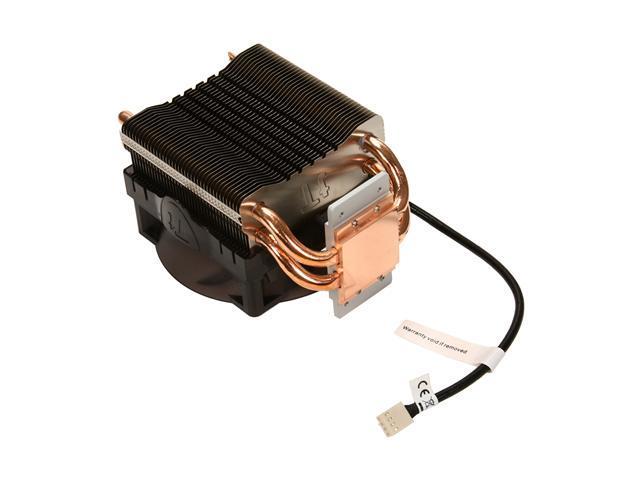 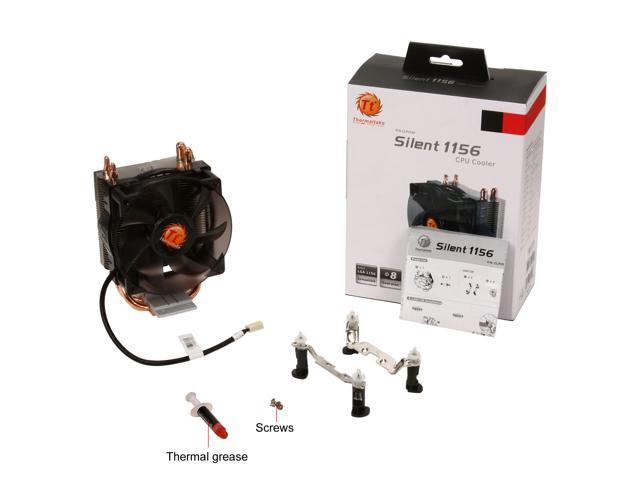 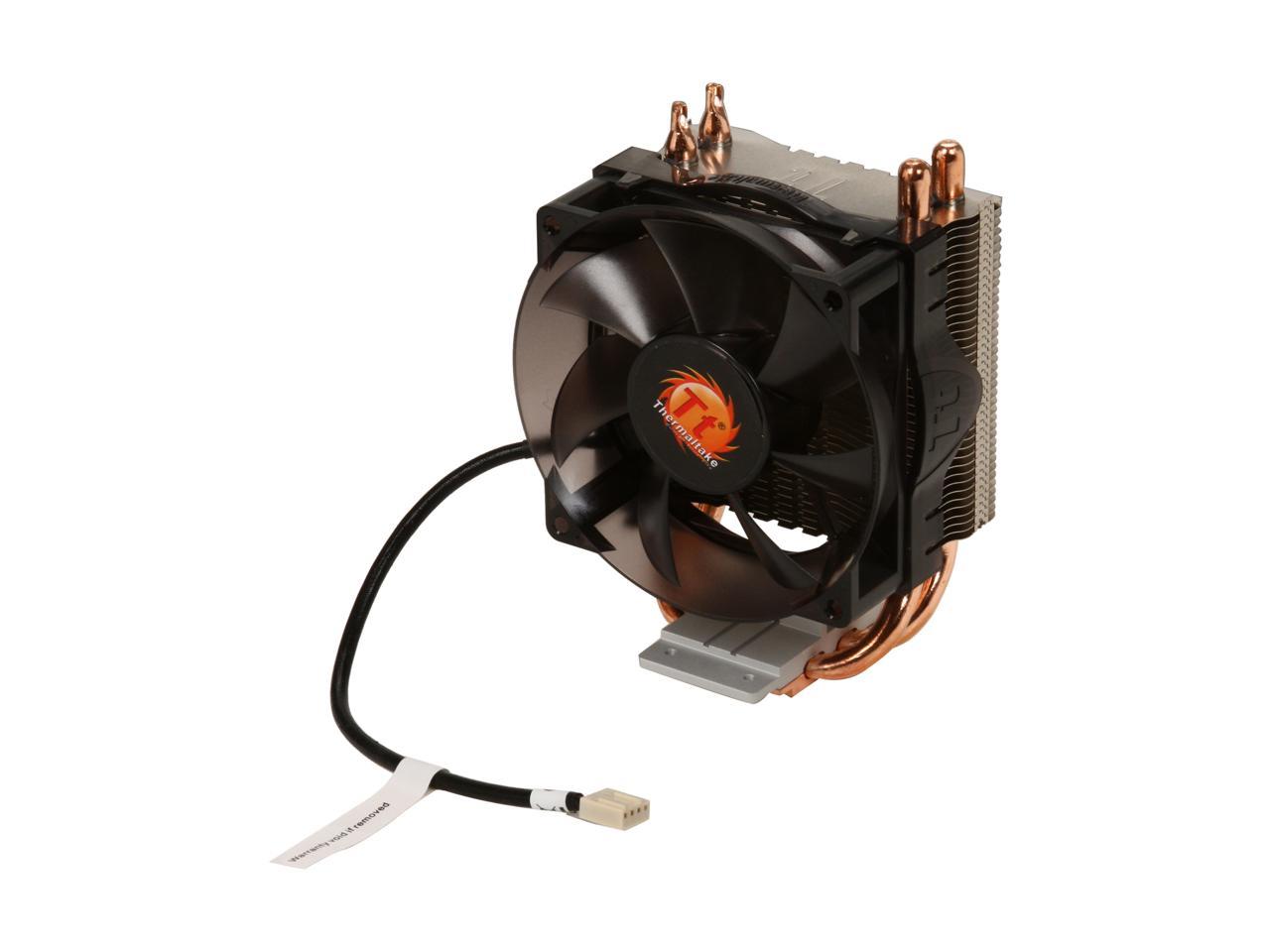 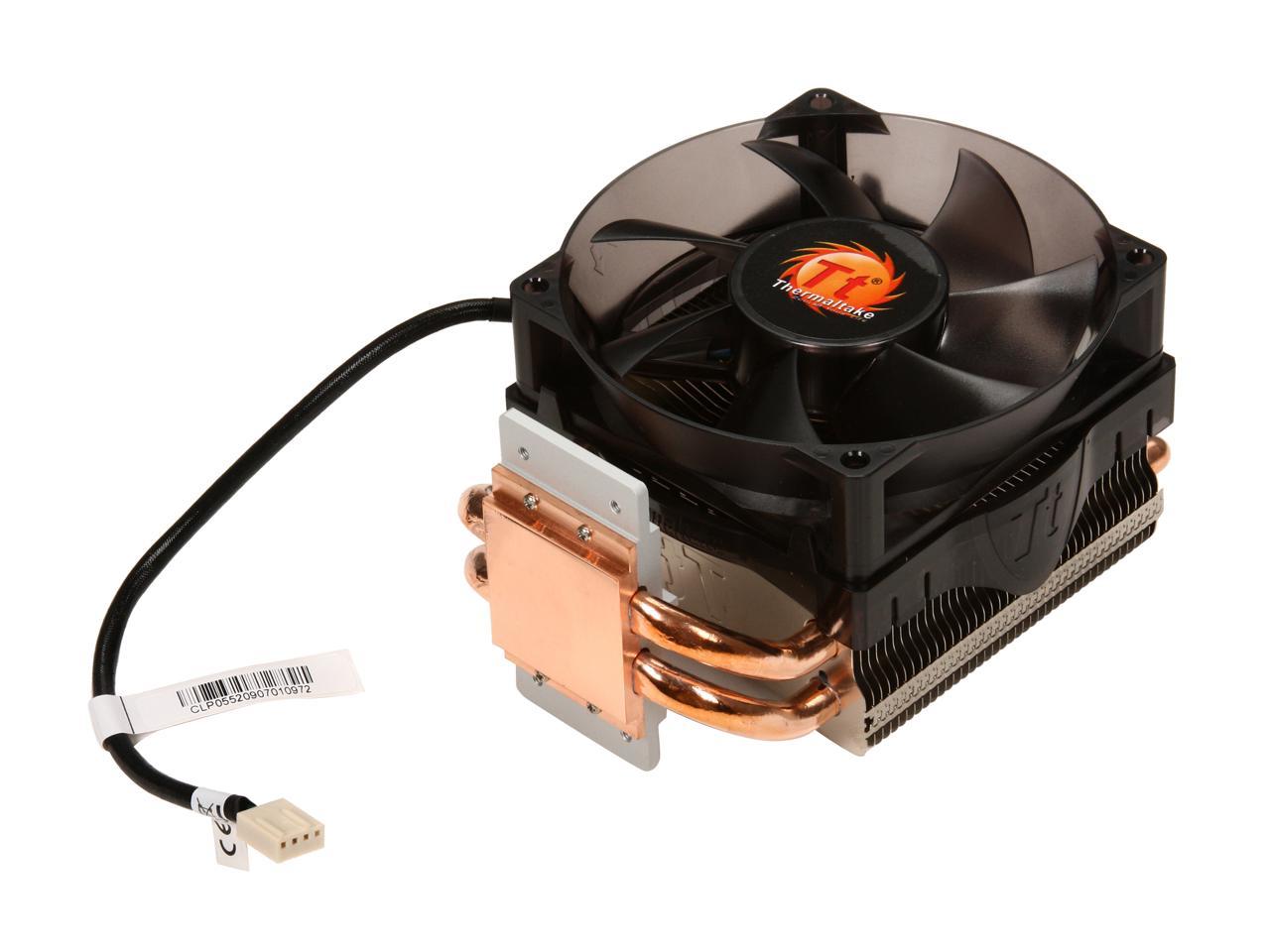 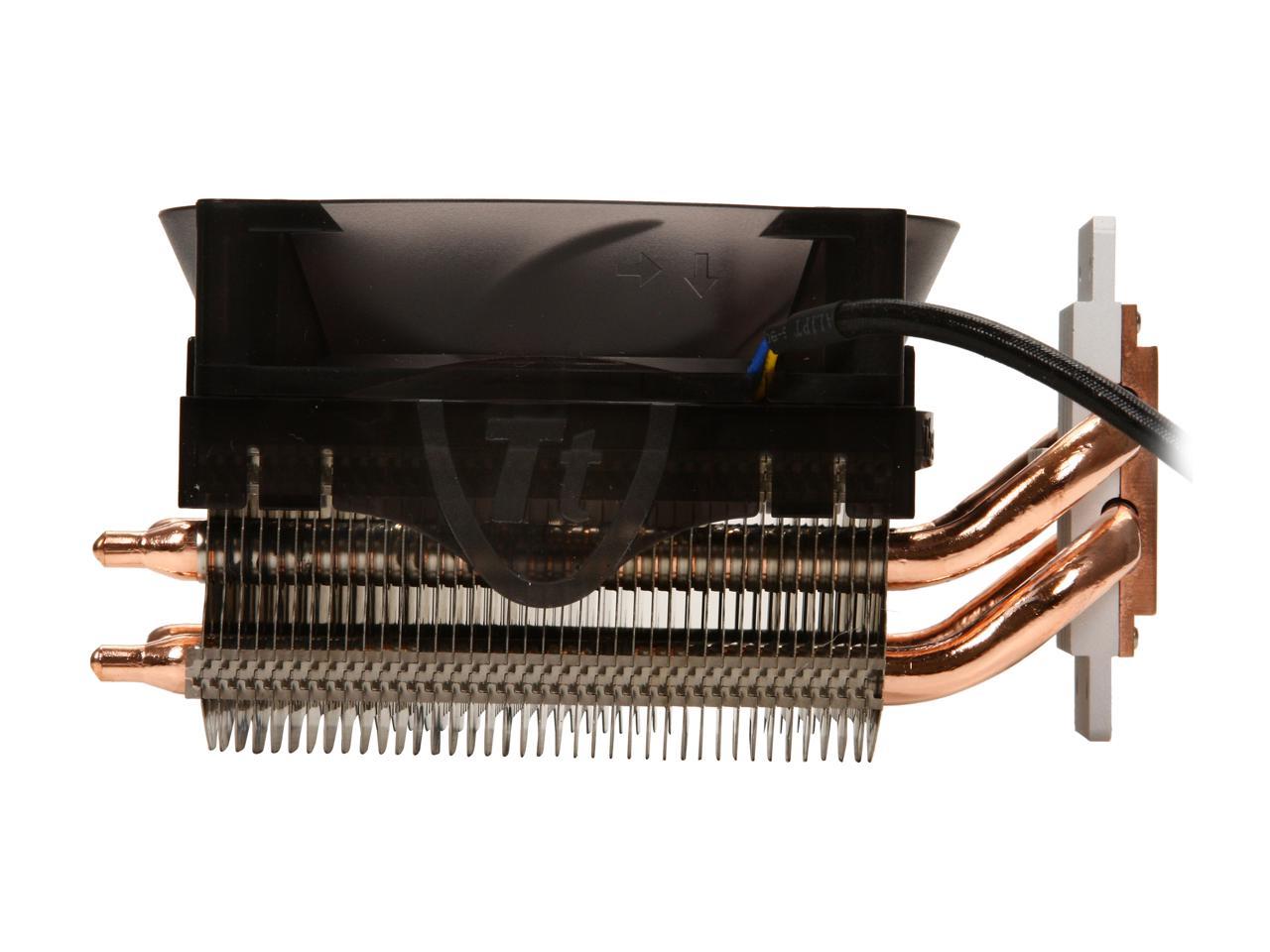 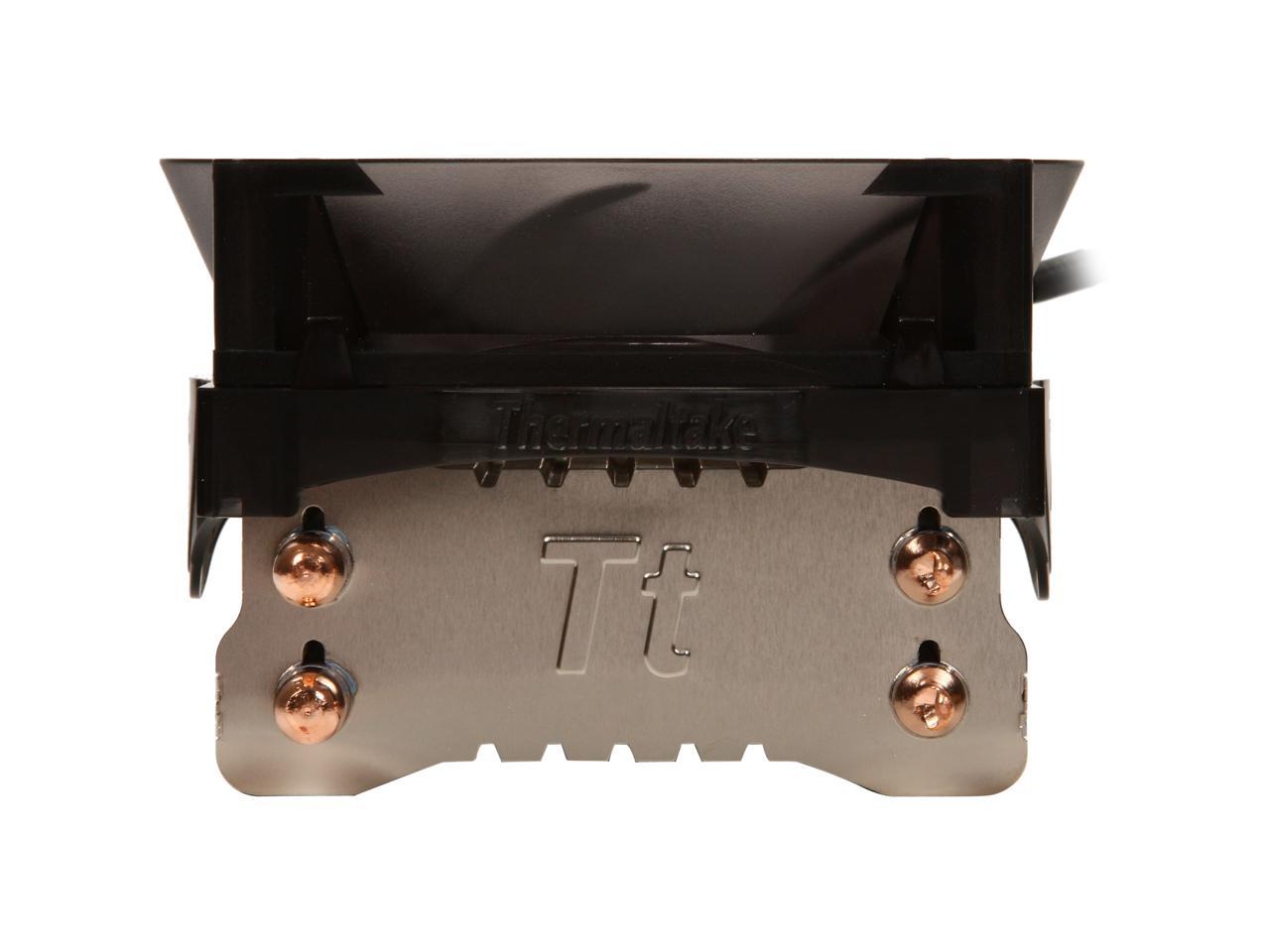 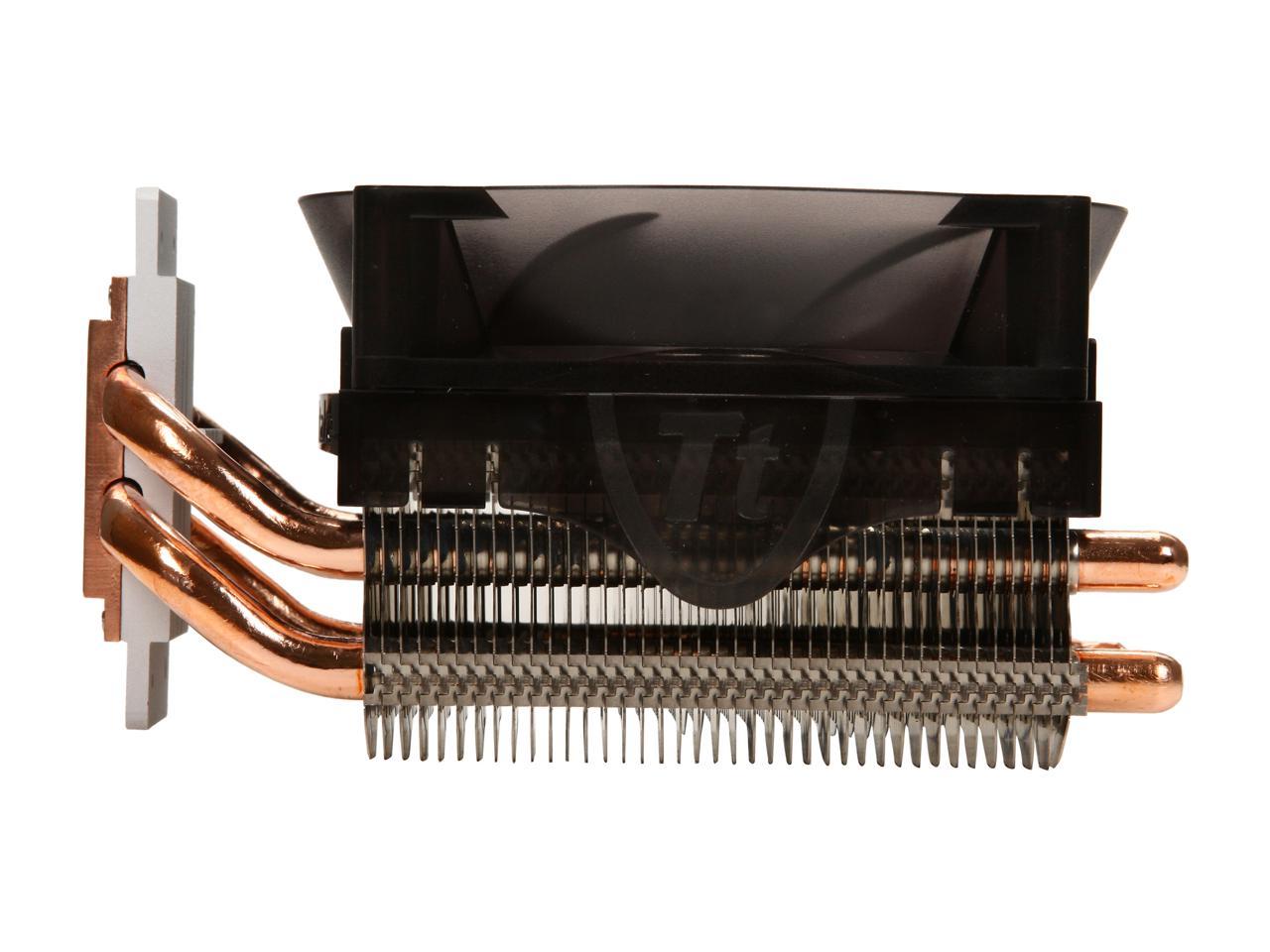 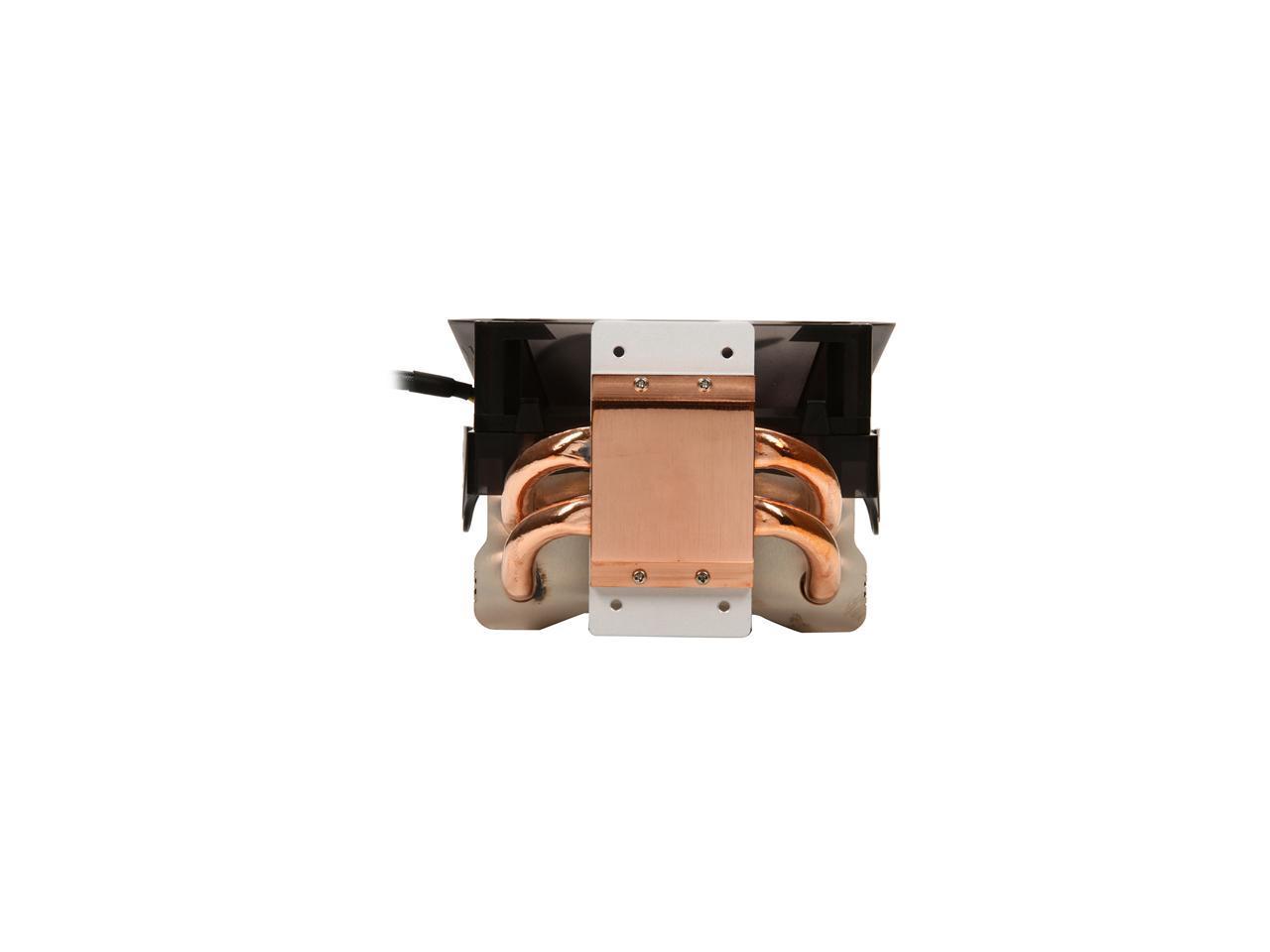 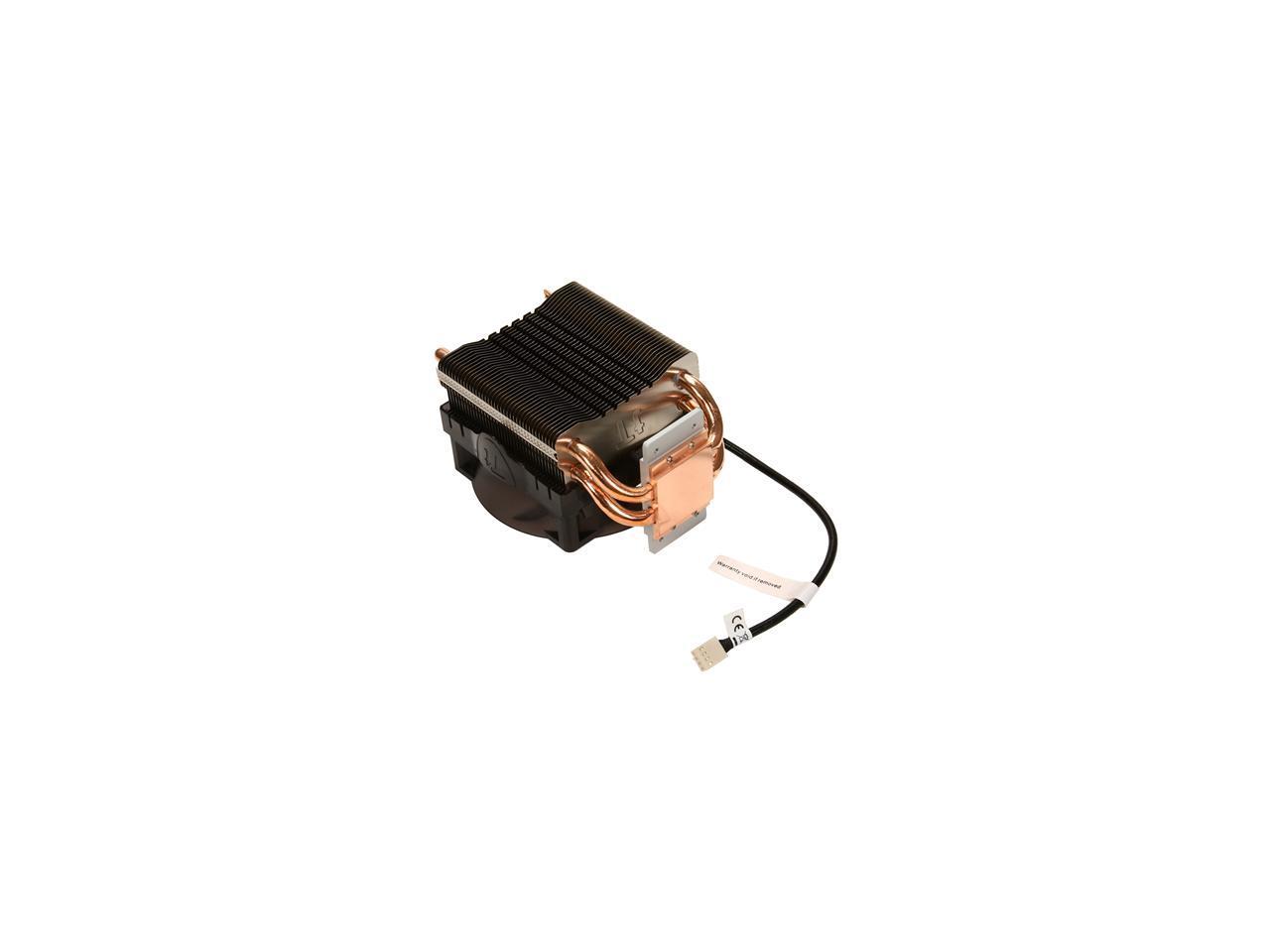 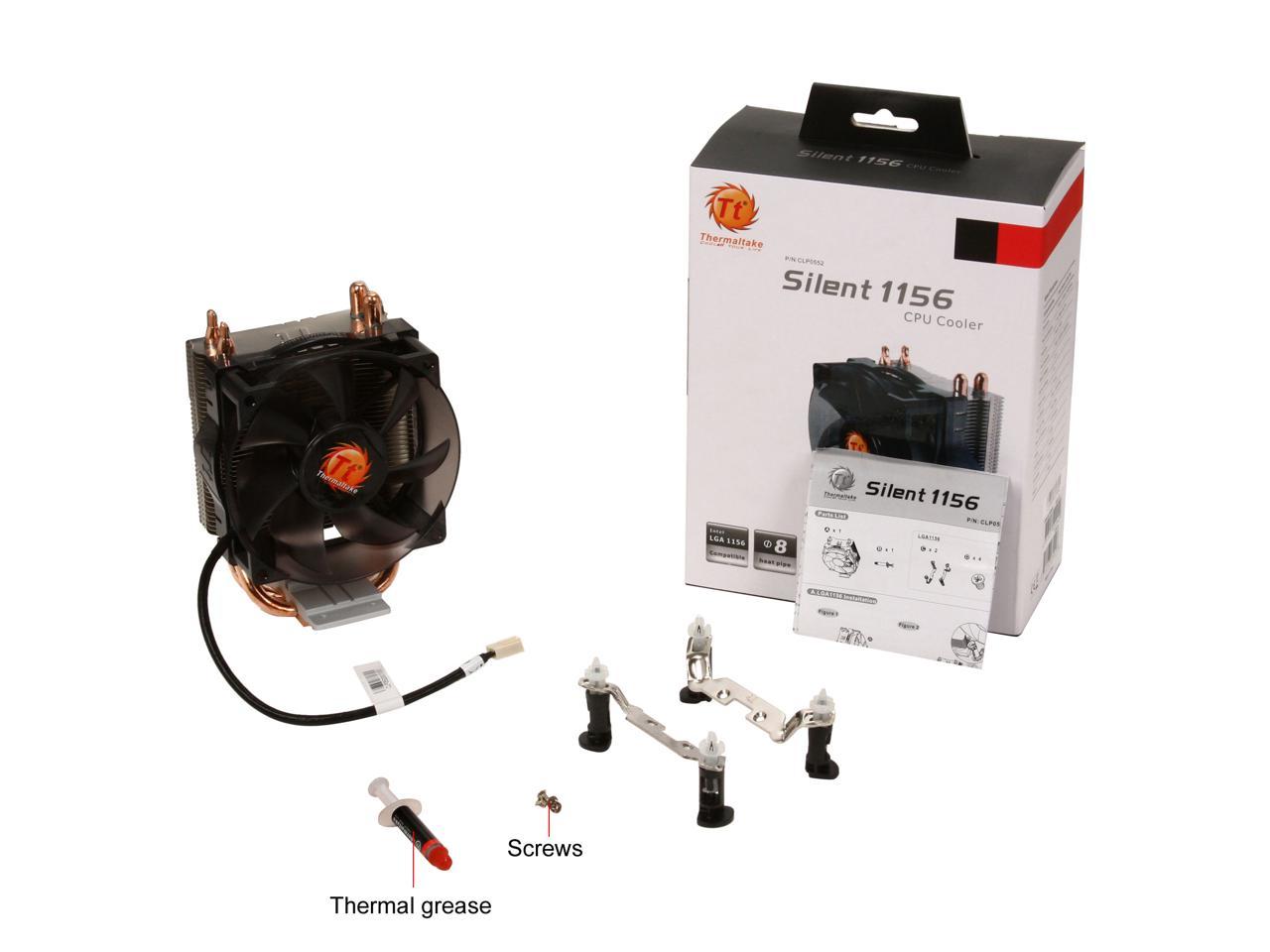 (107) Write a Review
In stock.
Ships from United States.
Most customers receive within 5-9 days.
Overview
Specs
Reviews
Thermaltake continues to bring innovative solutions to CPU cooling challenges. The CL-P0552 "Silent 1156" combines multiple features for optimal cooling of high-powered CPUs. True to its name, the 92mm fan of the Silent 1156 has a maximum noise level of 22 dBA at its top speed of 1700 RPM. The translucent fan moves an impressive 36.2CFM of cooling air.
Its stealth-like abilities are further enhanced by PWM control which lets the system monitor the fan's speed and performance and allows the fan to spin slower – and quieter – during periods of low thermal demand. The Silent 1156 easily mounts above the CPU using push pins and the copper base rests directly against the chip to draw away damaging heat. Dual seamlessly soldered heatpipes penetrate the cooling fin array above for optimal heat transfer and dissipation.
The Silent 1156 effectively cools Intel Socket LGA1156 processors including the Core i7, i5 and i3. Make sure it won't freeze your computer when you choose this Thermaltake Silent 1156!

Learn more about the Thermaltake CLP0552

Pros: -Silent The fan is about as close to silent as you could hope for. If you need to sleep in the same room as your PC, you should consider this. -Efficient design, with a solid copper base. Stock Cooler (41c idle) (62c load) Silent 1156 (33c idle) (49c load)

Cons: -Very cheap push-pins. No where near the quality of the Intel stock fan in terms of ease of installation. You can take an Intel stock fan off/on all day and not worry. Some serious buyers remorse is setting in. :( I have a horrible feeling it's gonna fall off any second.

Overall Review: This really is a one shot deal. If you screw up, you will bend the living daylights out of the cheap push-pins. Hopefully a v.2 will be coming soon.

Pros: Small, silent, cools decent, bang for the buck. And I personally feel that push pins are a huge pro. For some reason, so many people have issues, but it's most of the reason I bought this cooler! I change out CPU's like candy simply because I get bored (I have an I3 530, I5 655k, and I7 870 right now!), so I needed something that removes and reinstalls with the least headache. Anything with a backplate was just out of the question, so I saw this and am not looking back. You can remove, change out a CPU, and reinstall within 2 minutes without having to remove the back case cover (and also assuming you have a case with a CPU backplate cutout). Now thats nice.

Cons: For the smal price you can get an arctic freezer pro 7, which coolers a little better BUT the fan is MUCH louder (I have one of those and they are LOUD)

Overall Review: Not the best for I7's, although much better than the stock. Keeps my I5 655k overclocked to 4.6ghz at 1.36v about 15-20c cooler than the stocker did at full load.

Cons: Base of Silent 1156 poorly tap holes for securing push pin clip to base. I had to use 4/40 thread flat head screws with lock nuts to secure clips to base.

Cons: It's big. Not a con for my Antec 900 but for smaller cases it may not fit.

Cons: The pin bracket assembly is a neat idea, but had a hard time knowing when it was snapped in securely...wobbles a bit, but know it is in because of the temps I am getting

Overall Review: You want 100% silence, go get a water cooler.

Pros: It is what it claims to be, quiet and cool. Upgraded to this from the stock Intel heatsink and fan that came with my i5 2500k 3.3GHz. I used the Antec FORMULA 7 Nano Diamond for my thermal compound instead of the tube that came with the cooler. With all the power saving settings off @ 3.3GHz I'm seeing temps in the upper 20s. They were just under 40°C with the stock intel cooler. OC'd up to 4.2GHz it runs right around 75°C under max load for extended periods and in the upper 30s idle. Couldn't ask for more for the price. The pushpin design makes for easy installation if you have a case without a cutout behind the chipset. Just make sure the are all seated nice and tight as they can be a bit deceptive if your haven't have much experience with them.

Overall Review: Like all pushpin designs these could wear out and break if the cooler needs to be reseated too many times. Not really a con as I knew that about pushpins going in and they work well out of the box. Just something to think about for first time buyers.

Pros: Keeps temps in the low 30's, and installation is literally a snap.

Cons: The push-pin design means that re-installation of this HSF is not an option. Once the pins have been engaged, even if uninstalled properly, the HSF pins will never engage properly again.

Pros: -Works well -Not so big -VERY easy to assemble -great for first-timers -cools well for what it costs

Cons: -only OK cooling, don't expect to do any CRAZY OCs with this fan. I'd recommend it to someone who wants either swappable CPUs, or running a MILD OC. -the included thermal paste.... just get arctic 5 already