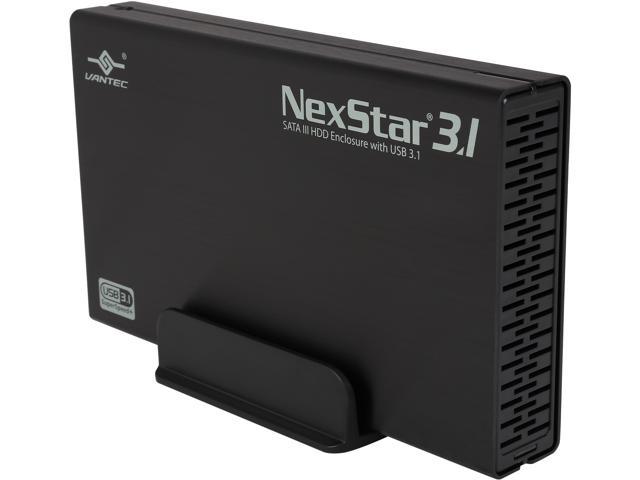 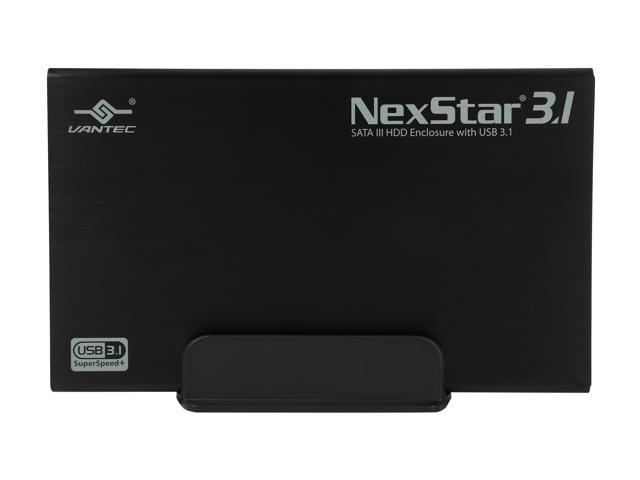 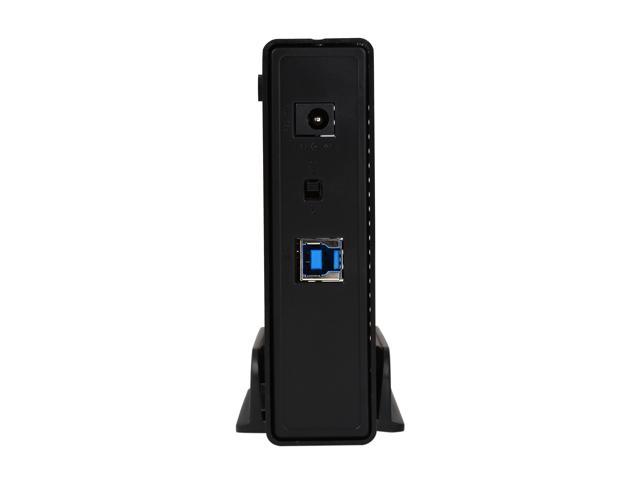 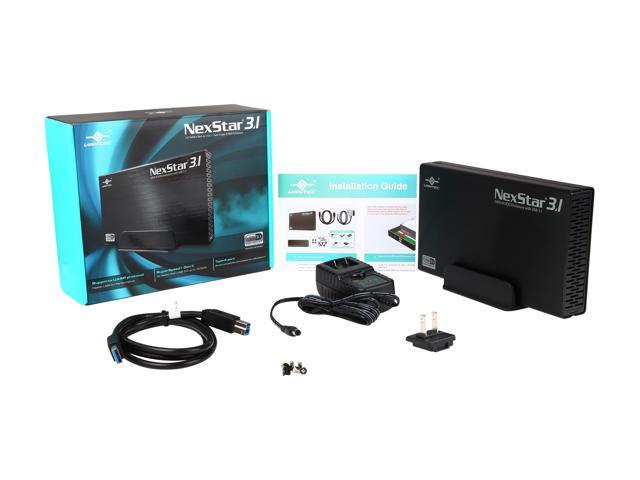 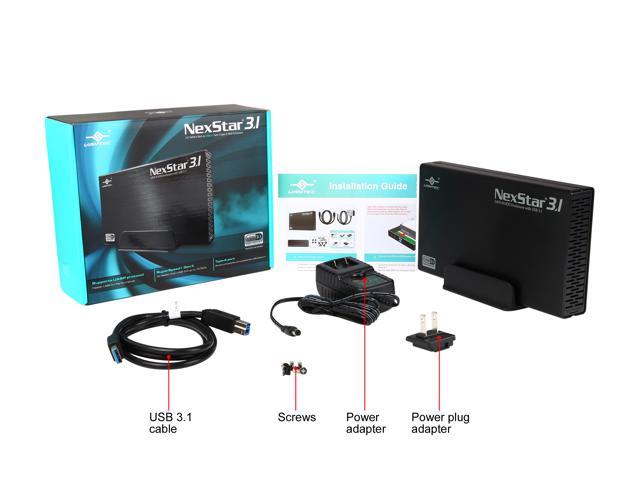 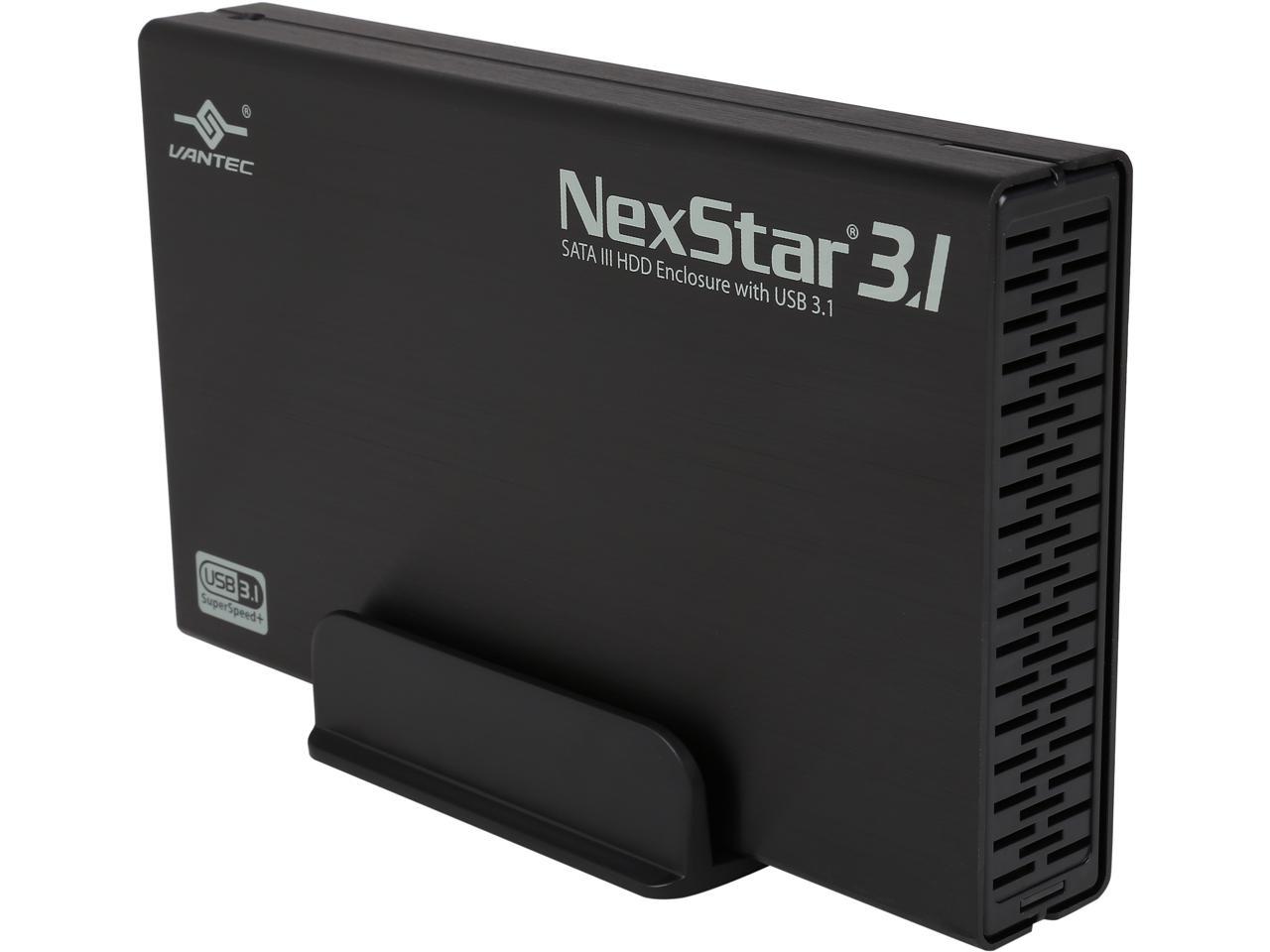 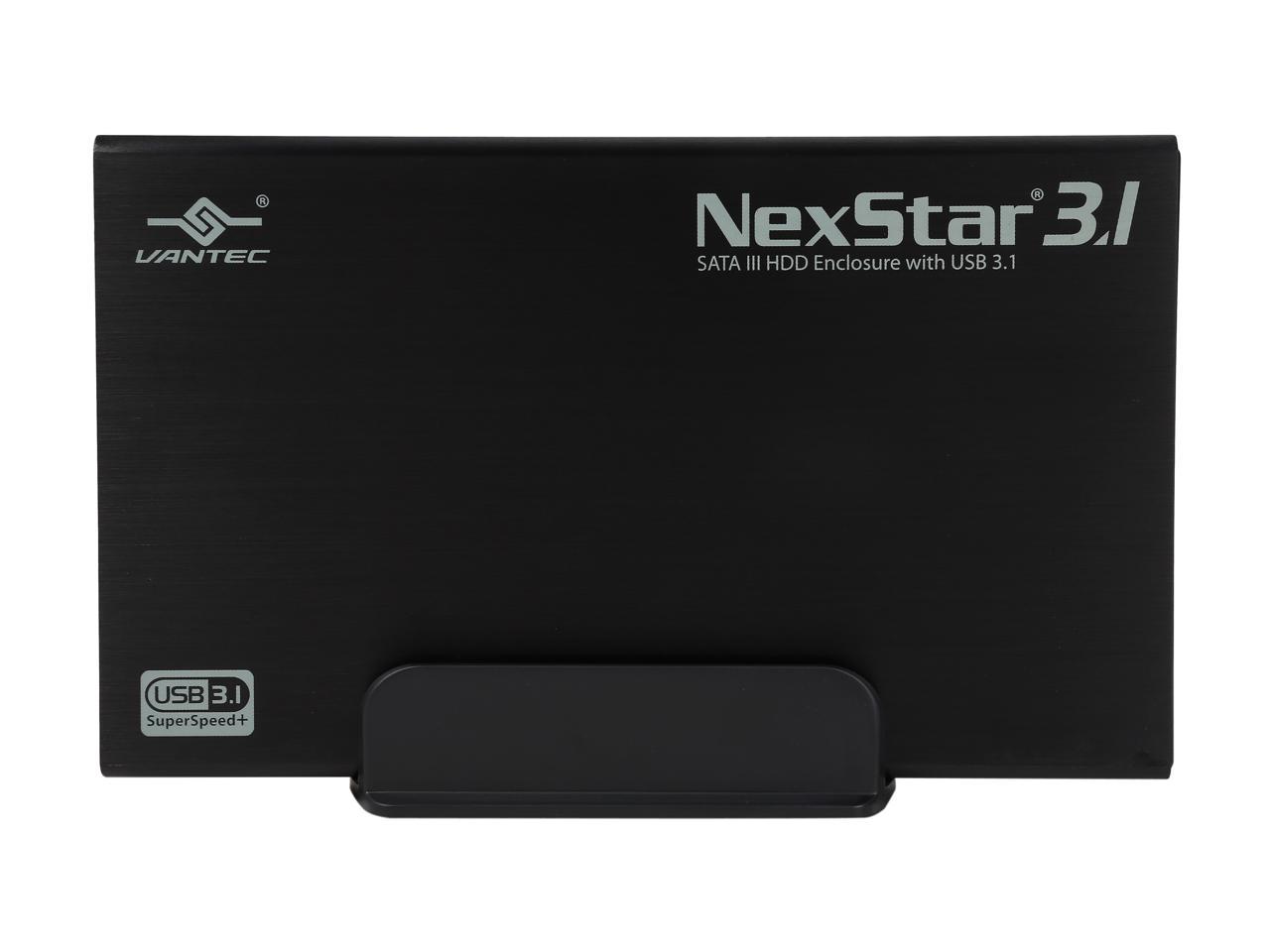 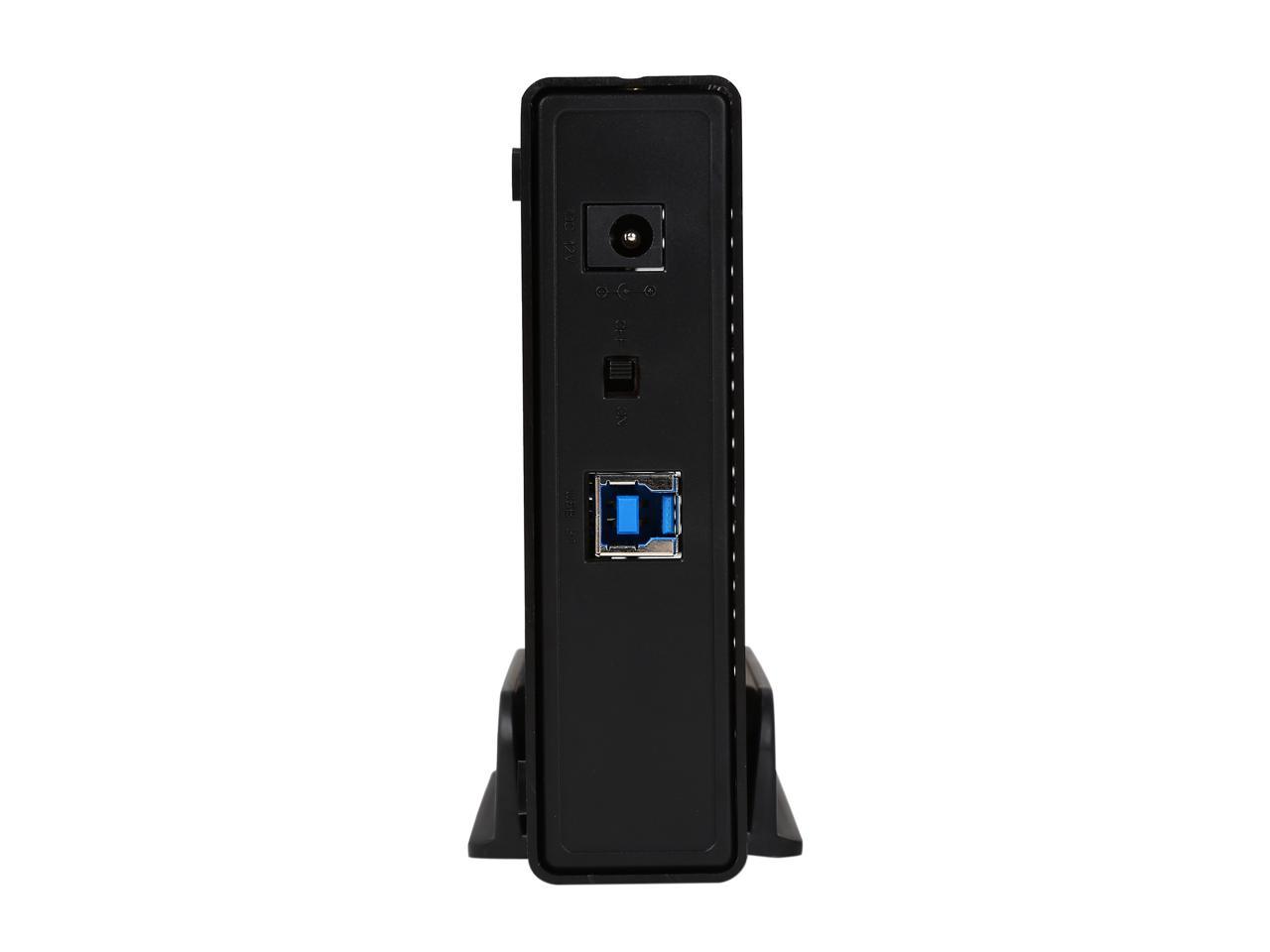 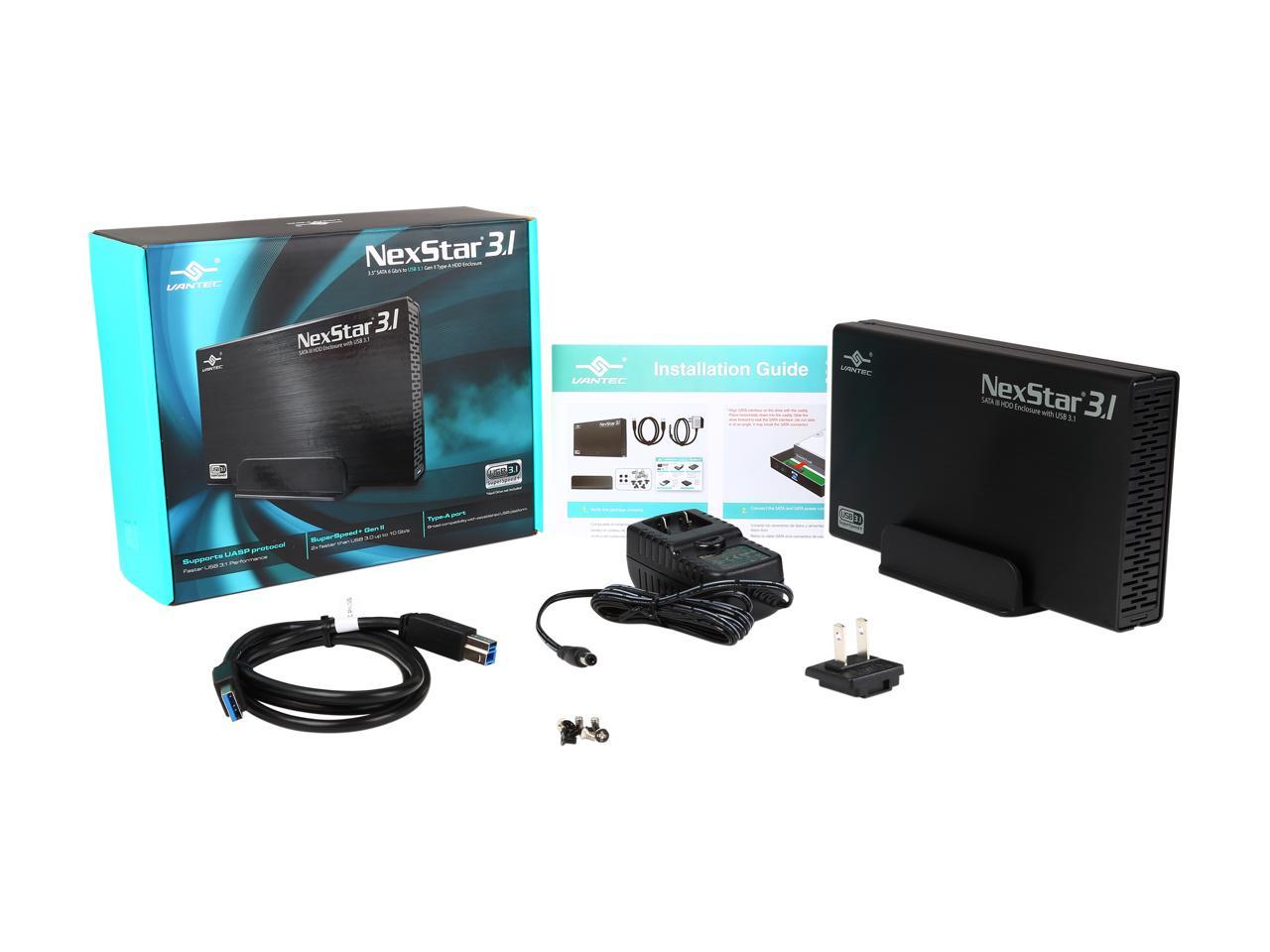 The NST-370A31-BK enclosure is one enclosure that will stand tall in performance. It is design with the latest GEN II USB 3.1 chipset to be very fast when linked to your SATA III HDD using the latest UASP protocol to shuttle data around in high speed. This NexStar follow the tradition of using the latest Aluminum Casing designs to protect the Hard Drive and effectively draws the heat away from the drive. Couple it with USB 3.1 technology and Type-A interface to give you an establish platform that is widely available with unsurpassed performance. This NST-370A31-BK enclosure offers good design, speed and functionality.

Learn more about the Vantec NST-370A31-BK

Pros: What you are getting is a very good enclosure to use an SSD with, or a regular old 2.5" platter-based laptop drive that's 9.5mm thick or less. Most USB-to-SATAIII enclosures are still based off the USB 3.0 protocol (now called the USB 3.1 Type 1), which is limited to a theoretical maximum bandwidth of 5Gbps. A SATAIII interface is limited by this factor, so most SSDs will not go beyond 450MB/s at its peak transfer rate when connected using a USB 3.0 enclosure. This enclosure will bring that back closer to your SSD's maximum transfer rate, although do be warned that there is some loss in performance due to the overhead in converting a SATA datastream through a USB controller and back into SATA through the USB3.1 Type II-to-SATAIII controller. The loss due to overhead I measured on a Hitachi 5900rpm SATAII laptop drive was about 7% for both reads and writes - 109 MB/s Read, 92 MB/s Write using a SATAIII port (Z97 chipset) - 102 MB/s Read, 86 MB/s Write using the Vantec NexStar 3.1 enclosure on Windows 7 64-bit with the latest USB3.1 drivers on a USB3.1 Type2-to-PCIe add-in card A Samsung 850 EVO 500GB's loss due to overhead was about 10% for reads and about 6% for writes. - 540 MB/s Read, 520 MB/s Write using a SATAIII port (Z97 chipset) - 490 MB/s Read, 487 MB/s Write using the Vantec NexStar 3.1 enclosure on the same system As a reference, here is the same Samsung 850 EVO 500GB in the same Vantec NexStar 3.1 enclosure, but connected to a USB 3.0 port on my Z97 motherboard - 421 MB/s Read, 397 MB/s Write That 69 MB/s difference in Read speed means that you can copy files from the enclosure about 16% faster and copy files onto the enclosure about 23% faster. How much overhead your HDD/SSD/SSHD will largely depend on the controller inside your drives as well as the operating system you're using. Windows 7 will have a slightly higher overhead than Windows 8.1, and Windows 10 (once it's fully optimized) could potentially have a much lower overhead than Windows 8.1. I'm not sure what the overhead is for Mac OSes, but I imagine it should be somewhere between Windows 7 and Windows 8.1 (or on par with Windows 8.1 in the case of Sierra). Other Unix-based OSes are getting USB3.1 Type2 optimizations before the end of 2016, so expect their performance to improve over the coming months.

Cons: This enclosure is NOT capable or reaching 10Gbps due to its SATAIII backplane. SATAIII is limited to a 6Gbps bandwidth, so it is impossible for this device to reach anywhere beyond the 6Gbps theoretical limit for SATAIII. While I understand the marketing reason for advertising the enclosure as being 10Gbps capable, it is downright misleading. Installing a drive into the enclosure can get a bit troublesome if you don't have a magnetic tray or a dish to keep the tiny screws together. There are a total of four screws for mounting the drive to the SATA backplane+tray and two separate screws for putting the tray in the aluminum enclosure. If you are using a drive thicker than 9.5mm, you will not be able to put the tray into the enclosure sleeve. The drive backplane+tray is made of plastic, not metal, so it mitigates the effectiveness of the aluminum cover is dissipating heat. While there is a vented front panel, you will not get any significant cooling from it due to the lack of space between the enclosure and the drive itself. Your best bet for cooling 7200rpm platter drives is to remove the enclosure and put a fan directly over the drive+tray assembly (I put mine under the floor air intake of my PC for better cooling). There is a blue LED indicator light at the back of the enclosure right next to the microUSB port. It's odd that Vantec put the activity light pointing away from the user, but after seeing how bright the light is, I understand why it's there. Do note that the metal case is a fingerprint magnet.

Overall Review: I suspect this enclosure is using the ASMedia ASM1351 controller, as it seems to be the only USB3.1 Type2-to-SATAIII controller that was in production when this enclosure was made. I don't know if JMicron's JMS580 controller was even being shipped to vendors when this device came out. The case will get warm to the touch with the installed drive under heavy use, moreso with platter drives and especially with 7200rpm drives. This is normal for any enclosure: the more heat it can transmit though its cooling jacket, the less heat build-up you will have to worry about. And as a reminder, if you're plugging this enclosure into a USB 3.0 port, you will not benefit from its higher-spec USB 3.1 Type2 speed. Make sure your motherboard or system has USB3.1 Type2 ports before buying. The older USB3.0 version of this enclosure works just as well and costs less on the older USB3.0 port.

Overall Review: This is a great USB HDD enclosure. I had a spare 3.5" 1.5TB HDD lying around and slapped it in here. My computer instantly picked up on the enclosure without any issues. One thing I did notice is that the HDD will actually not power on until the computer detects the drive so it's not constantly sitting and running. So far the only issue I've had is that I cannot get my ASRock Fatal1ty Gaming-ITX/AC motherboard's USB 3.1 type a port to run this enclosure at full 3.1 10gbps speeds. I'm not sure if it's the motherboard or if it's the enclosure that is restricting it to USB 3.0 speeds. Even if this only runs at 3.0 speeds it is still significantly faster than the old USB 2.0 enclosure I was using.

Pros: I have 4 of these and love them that's all I can say,they are well built and rugged without being bulky the plastic tray is made out of is pretty thick as well and I like the cooling vent's at the rear of the case. I have owned many Vantec product's and they have always worked flawlessly for me and have never had any problems with any of my Vantec case's. I get 100Mb per-second if I'm transferring movies and TV Shows into my SamSung 850 Pro 512GB SSD and faster speed if I'm transferring smaller files,I'm also using an ASUS X99-A Mobo and a ASRock USB 3.1 Front Panel with no problems of any kind. This case is really nice and easy together and is smaller thankfully then Vantec's USB 3.0 case's .

Overall Review: Does not come with any screw driver so you may want to pick up a eyeglass set of screw drivers that has Star's in it.

Pros: Fast 3.0 speed (which is all I have). Easy assembly. A long power wire (6 feet). 3+ foot USB cable No overheating on long transfers to my WD Black drive. Note, though, that the transfers take much less time than they used to. I like the rectangular shape. Possibly-dampening pressure pads hold the stand on securely (The vertical stands on my older Vantecs fall off easily.)

Cons: Minor: my WD Black FZEX 1TB 3.5" drive does vibrate through to my wooden desk so I have to put something under it. A third pad in the stand may have prevented that.

Overall Review: The USB cable is marked "USB 3". The blinking blue LED was bothersome when I ran it overnight. The tray can be installed either way. I have the LED at the top which puts the power socket near the bottom. The LED's so close to the top that it's easy to hang something over the edge to block it. I came to Newegg to buy my second one (because the local computer store ran out).

Cons: -Wish the cord was a little longer

Overall Review: Using this for my gaming SSD and I get good speeds with it through my USB 3.1 port. 1 year in use and still going well.

Pros: Put a 1TB 850 EVO in and it rocks. Fast and is recognized by everything! Buy it!

Cons: Wish the ends were metal and not plastic. 1/2 Star loss but still worth the price of admission.

Pros: Vantec cases have a history of manufacturing quality with parts that fit together well. Fanless design for quiet performance. Case material is brushed aluminum, which does not show fingerprints as readily as glossy or plastic cases. Has on/off switch.

Cons: Wish the status light was less obtrusive; it's a bit too bright and can be annoying in a moderately-lit workspace.

Overall Review: Beware newegg seems to mix together reviews for different cases -- even mixing 2.5" cases with 3.5" cases. Make sure you're comparing reviews for the same item. This review is for the NST-370A31 case, designed for 3.5" hard drives. It looks like the case doesn't have a lot of ventilation, but in my tests the case did not get too hot to touch. It gets warm with heavy disk activity, but not too hot to touch -- as has happened with some other cases. Of course, YMMV depending on the thermal characteristics of your chosen hard drive. This case is rated as USB 3.1 Gen 2. However, SATA-III disk drives can't even saturate a USB 3.0 (aka, USB 3.1 Gen 1) connection, though, so this case is actually over-designed. In my tests with a few different disk drives, transfer speed was consistent with a couple other 3.0 cases and docks I have -- and none of which came anywhere close to SSD speeds. SSDs can go faster ... but SSDs are not 3.5" desktop size (they're 2.5" laptop size). So this case is obviously for traditional desktop disk drives. A USB 3.1 Gen 2 case for 2.5" drives may make sense because you might put a SSD in it, but for a 3.5" disk drive you won't need more than a USB 3.0 case. Nevertheless, this case works very well. Being over-designed isn't a negative, but just don't expect it to outperform a USB 3.0 case with any SATA disk drive on the market today.