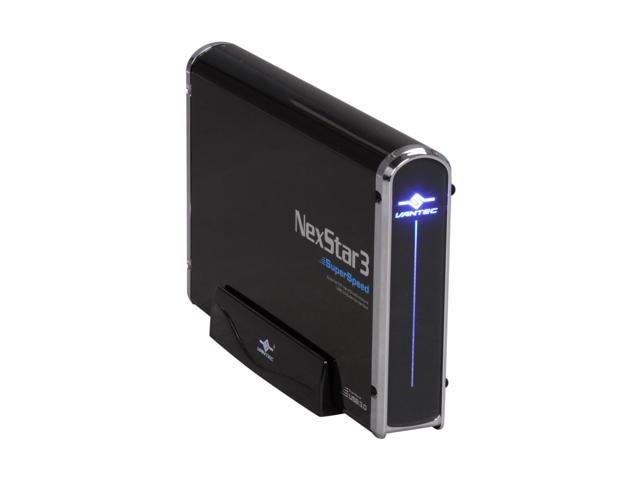 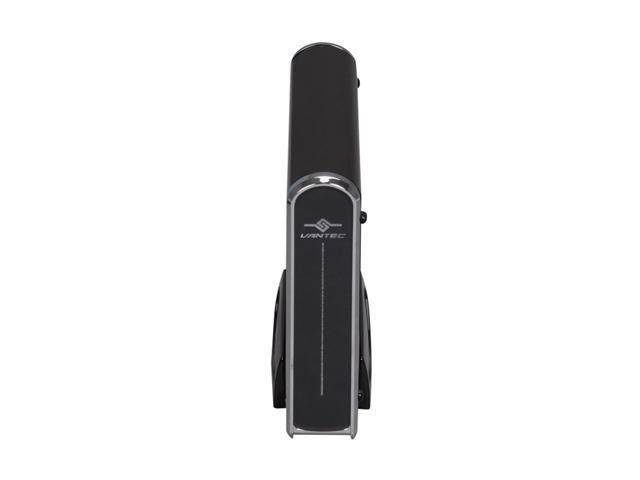 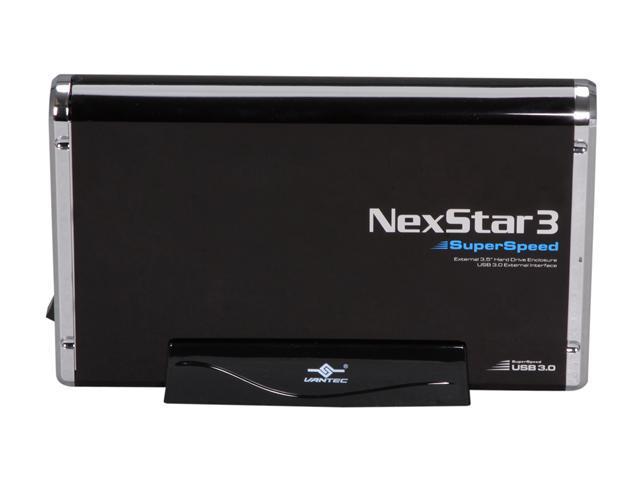 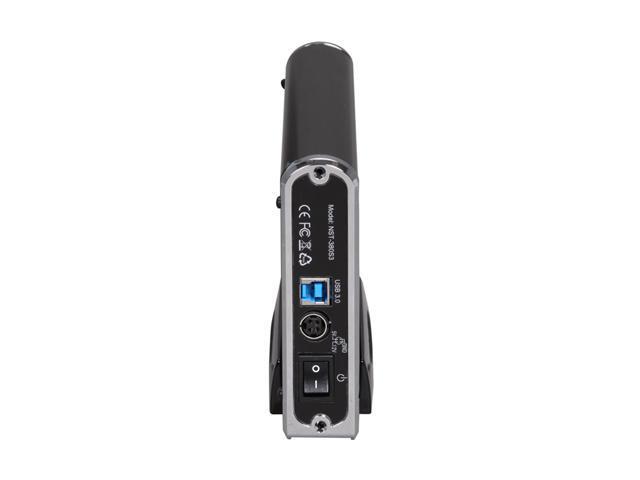 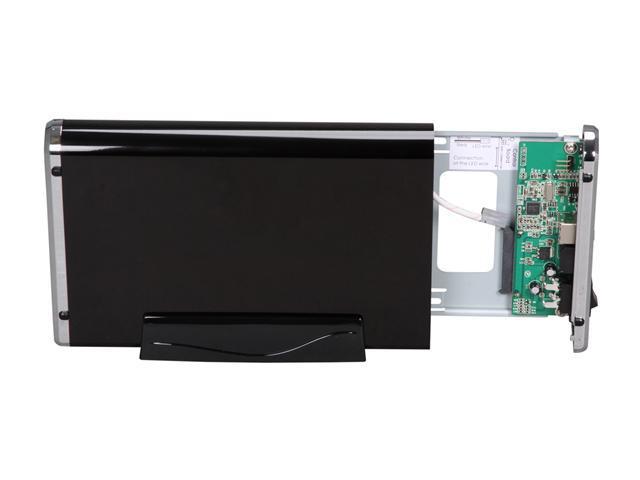 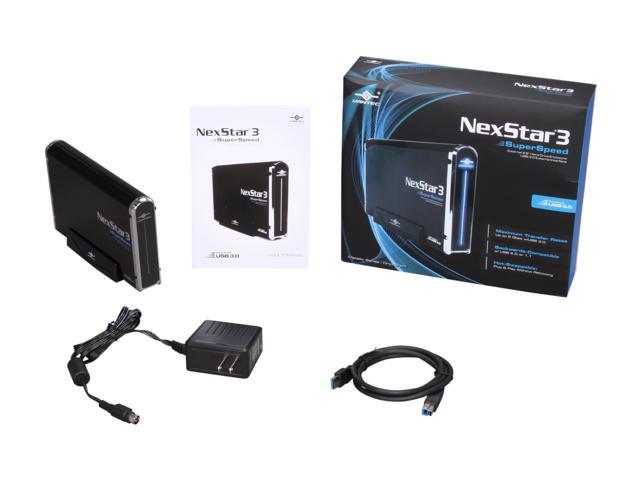 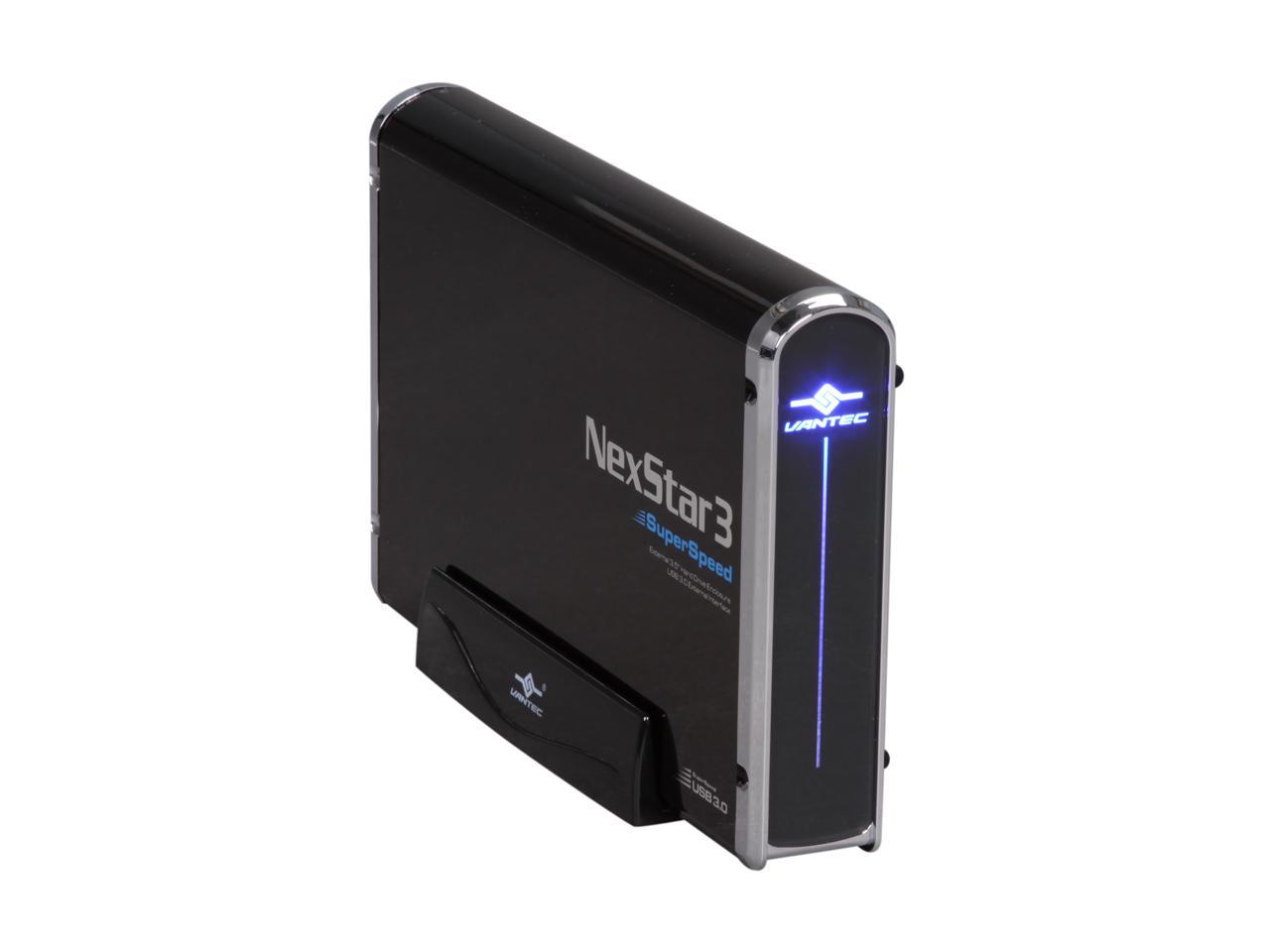 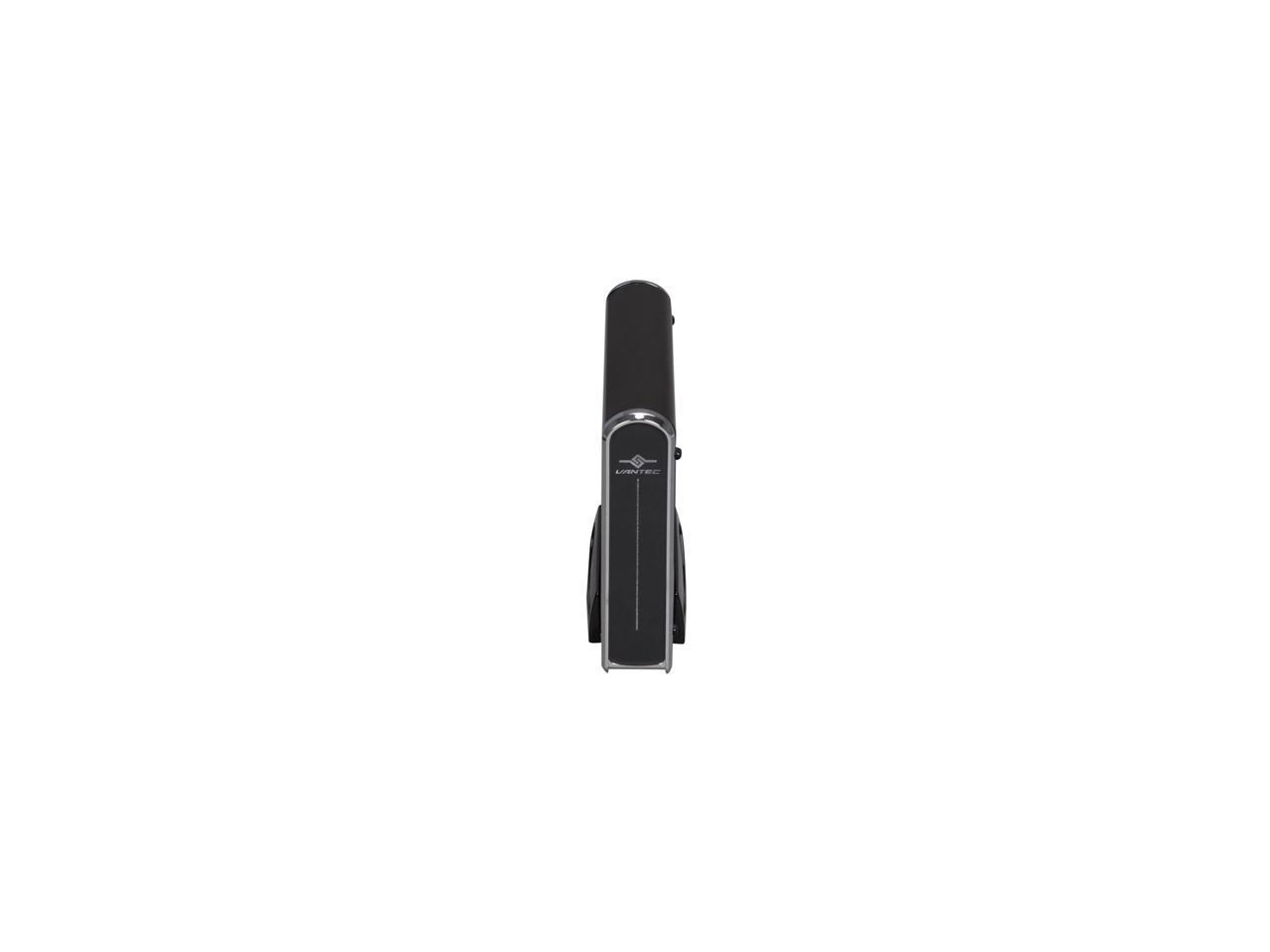 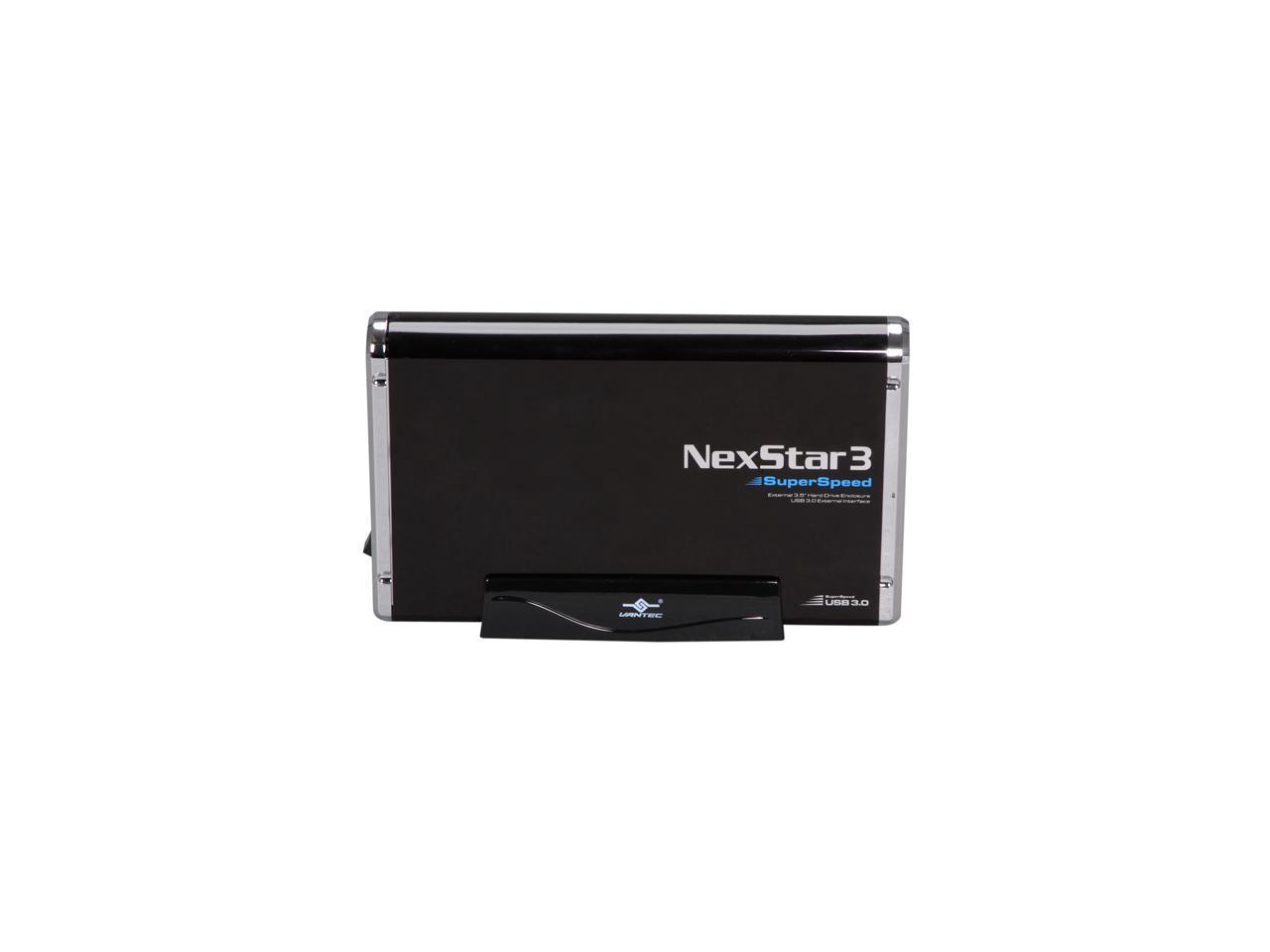 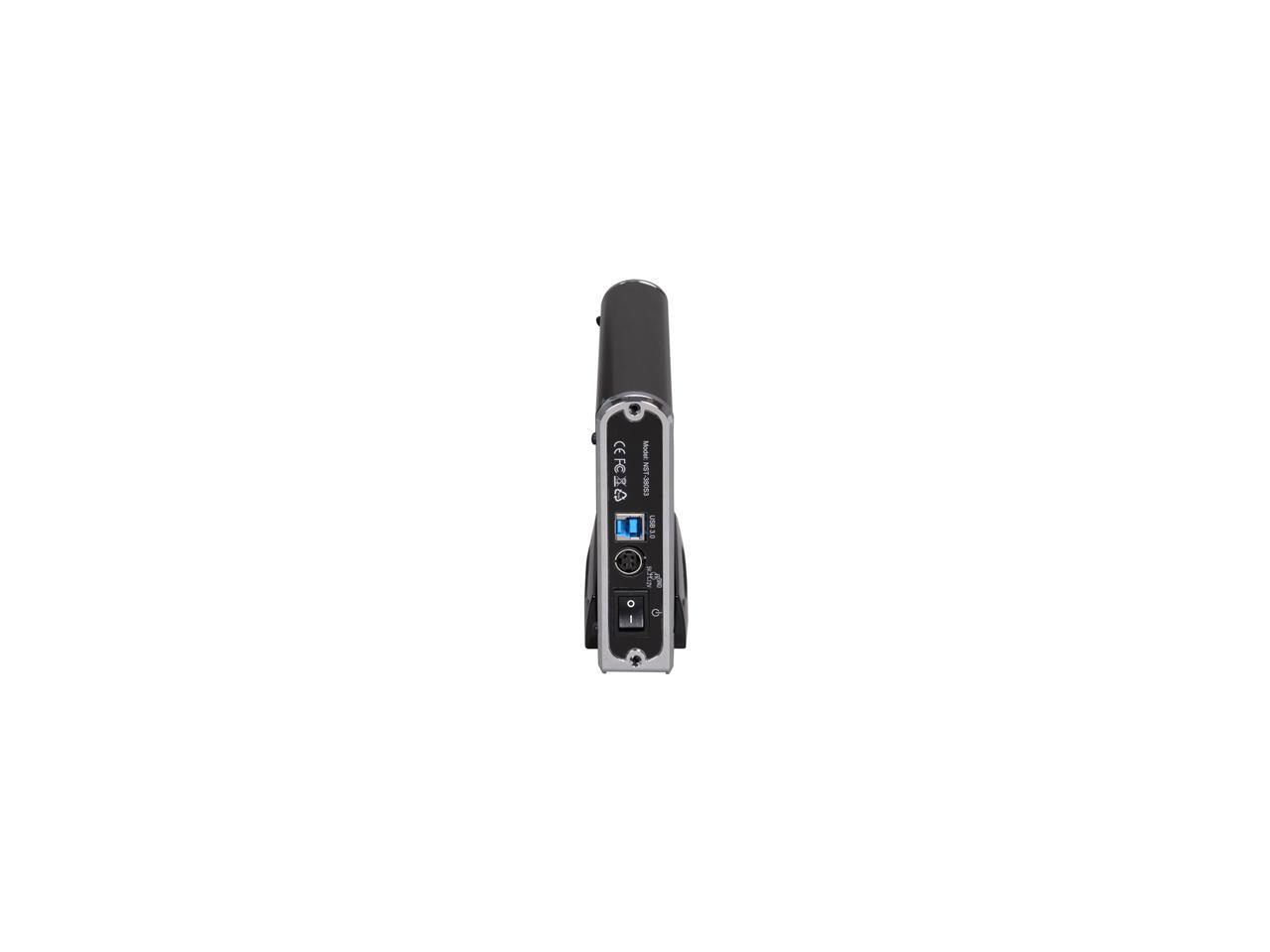 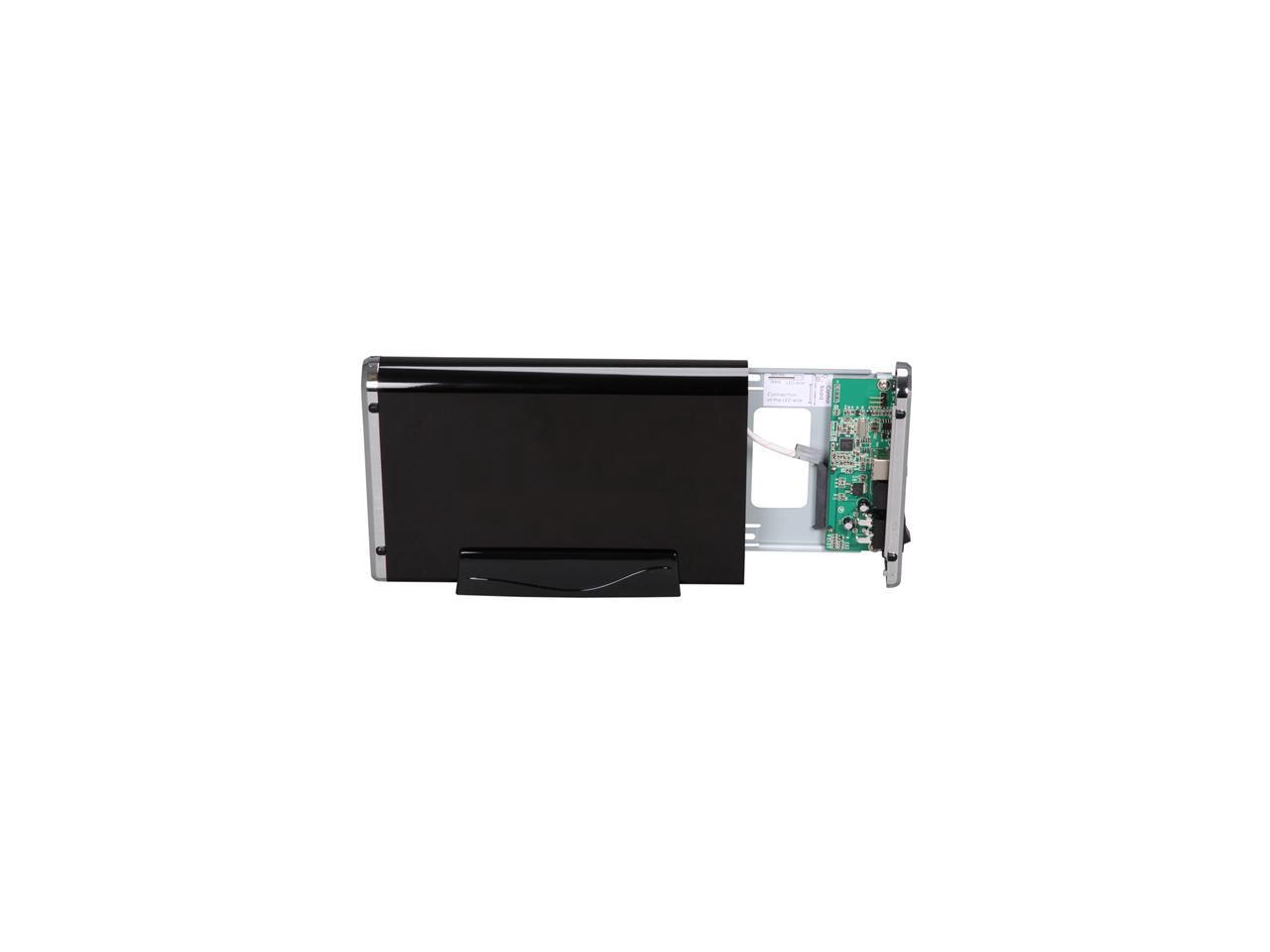 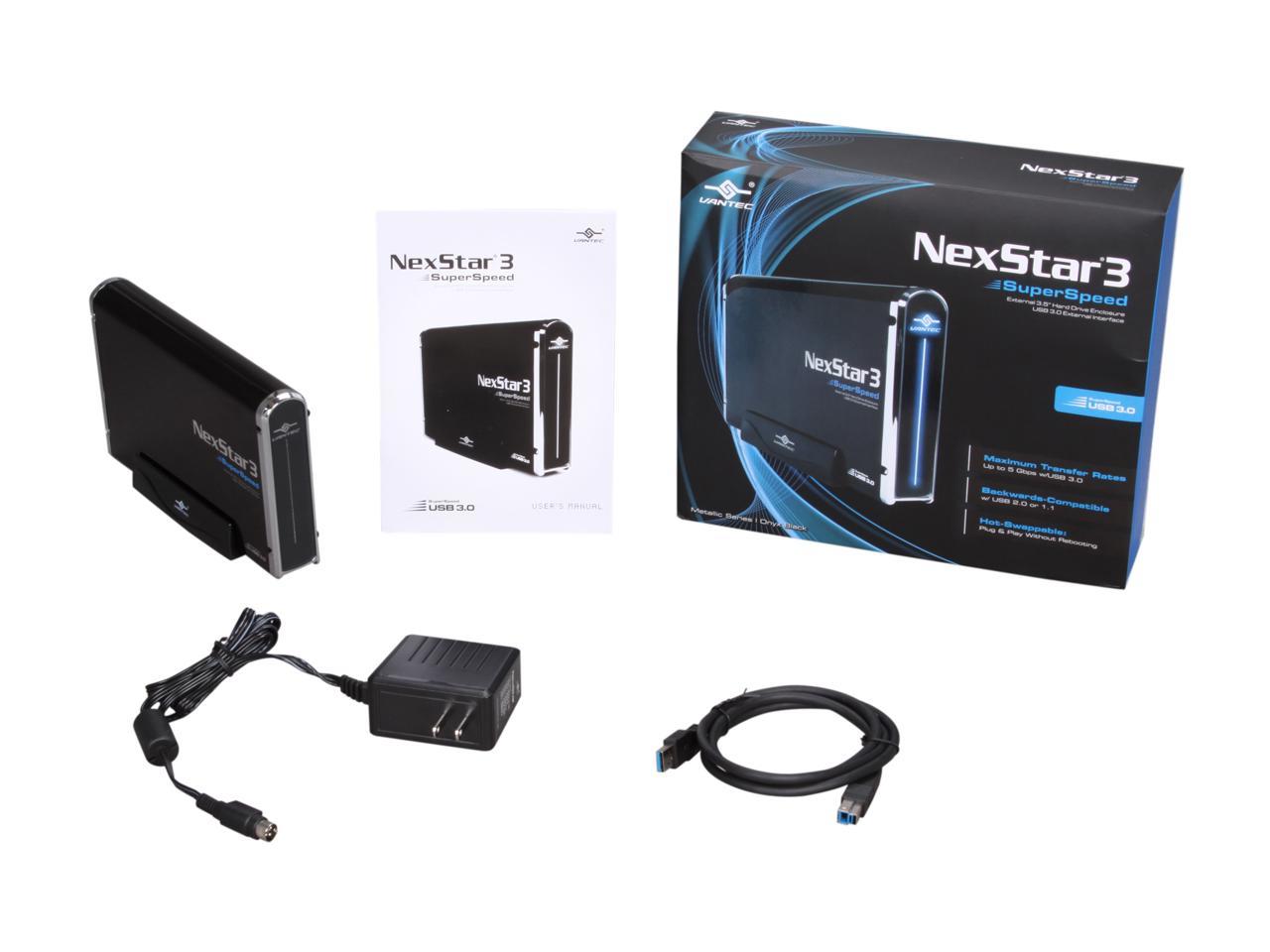 (33) Write a Review
OUT OF STOCK.
Overview
Specs
Reviews
Form and functionality collide with style in the NexStar 3 SuperSpeed External Hard Drive Enclosure from Vantec. With its mirror finish and sleek curves, the Vantec NexStar 3 SuperSpeed stands out from the crowd. The sturdy drive cage protects your hard drive while the aluminum case effectively draws away the heat, protecting your drive from overheating. Integrated with the latest USB 3.0 technology, performance is increased by 10 fold offering maximum speeds of up to 5Gbps. Quickly store and back-up your data with the Vantec NexStar 3 SuperSpeed External Hard Drive Enclosure.

Learn more about the Vantec NST-380S3-BK

Pros: USB3, obviously. Finally external drives can have speeds comparable to internal ones! Absence of a fan permits quiet operation. Access light not too bright and can easily be disconnected if desired. Sleek, very shiny appearance. Vertical or Horizontal orientation with removable vertical stand. Rubber feet prevent sliding and fit into sockets on other side of case, permitting stacking. Includes USB3 cable and power adaptor. Supports SATA 1.5 and 3.0 Gbps drives. (NOT 6Gbps drives - see manufacture website and Cons, below) Backwards compatible with USB 2 (Tested) and USB 1.1. Small form factor (see specs for dimensions)

Cons: Does not support SATA 6.0 Gbps (check manufacturer's website, Newegg doesn't say). Probably not a big deal as USB3 has an estimated maximum transfer rate of 3.2 Gbps after hardware ECC (8b/10b encoding) and protocol overhead (see USB3 spec. section 4.4.11). So even if it did support SATA 6 Gbps, you probably wouldn't notice much improvement. Absence of a fan means drive is quiet, but may get warm, especially power hungry hard drives like 10 or 15 kRPM models (so no fan is a pro or con depending on your HDD and ambient cooling situation). Drive does not seem to go into a power saving mode after a period of inactivity. I have only tested this for about a half hour before switching the drive off, but I would have expected this to happen sooner. This could potentially shorten drive life and exacerbate any overheating issues. Most other externals I've used spin the drive down after 10 or 20 minutes.

Overall Review: Excellent performer overall. I needed an external enclosure because I ran out of SATA headers in my tower (11 HDDs and counting - wow!). I would have docked a star for the apparent lack of any sort of idle spin down, but I only use the drive periodically for backup purposes and simply switch it off when not in use, so its not a problem for me. Just a note that several of the other reviewers seem to be confused about the transfer rate. For the record, 1B/s (byte per second, with capital B) is 8b/s (bits per second, with lower case b). Serial interfaces like USB, SATA, and Ethernet are rated in bits/sec because they transfer 1 bit at a time. Parallel interfaces like IDE are rated in bytes/sec because they transfer a byte at a time. That said, since this enclosure supports up to SATA 3Gbps, which has a maximum realizable transfer rate of 2.4Gbps due to the 8b/10b error control coding, the maximum realizable data transfer rate will be 2.4Gbps = 300MBps assuming the drive can keep

Cons: Gets a little hot, but so far not a problem. The lights on this are a bit bright.

Overall Review: It's two screws to pull out the drive bay, then four to screw in the drive to the bay. There's a little wire that runs from front to back, presumably for the LEDs at the front, and you need to connect/disconnect it when inserting/removing the drive. I haven't tried leaving that unplugged to turn off the LEDs, but that might work.

Pros: USB 3 throughput enabled me to transfer 200 gb of data in 52 minutes using this external. USB 2 took over 2 hours to accomplish the same task. A huge improvement in time saving and data transfer rate.

Cons: Connecting this to a USB 2 port doesn't always work for some reason. It lost an egg for this sporadic quirk.

Pros: - Decent USB 3 speeds reached - No issues with a couple different of my HDDs - Feels durable

Overall Review: I got this product on the cheap, so the corners that I saw that were clearly cut did not bother me. I did expect the drive to be easier to install. Two screws must be removed. The board on the inside of the product feels like it could easily break when attaching a drive. Each time you close the enclosure, you must awkwardly attach the LED cord if you want that and while closing it, this cord is forcefully bent back against some glue that holds it against the wall inside the enclosure. It feels cheap internally. You should not have to worry about this unless you frequently change the drive though. The power cord is unlike anything I have seen. I'm not familiar with it at all, so I'm thinking it's non-standard, but it may not be. If you can live past these shortcomings, then this product should be fine for you. It currently works great with my 1TB drive and I like the fact that it directly recognizes the drive and no drivers from Vantec are necessary.

Pros: Its as fast as the drive you install. Beautiful case ! Feels like quality.

Overall Review: I wish they came in different colors. I installed a 1TB WD Caviar Black. Fast, fast fast. Just flip the switch and instant memory. Makes a great back up. I use it to record Pro-Tools 10 to so I can carry the raw files to a work station.

Pros: I've had many external housings over the years (remember how exciting SCSI II was?), and in the last decade almost all of them have been Vantec. I highly recommend the brand in general when it comes to housings.

Cons: None so far; they've all be flawless over the years.

Pros: Small and stylish. Very easy to put together. Windows picks it up and installs neccsary drives right away. Brings everything you need to get your HDD's up and running. Data transfer rates are outstanding. Short bursts 100MB/s +. Big transfers settle at about 60-70 MB/s. The internal LED power cable can be left unplugged if you dont like overly-bright and unneccary LED lights (like me). Can be stacked horizontally with notches to keep them in place on top of each other.

Cons: The casing does get a little bit hot under heavy use. Doesnt need a fan. A couple of well-placed vents would have done the trick.

Pros: Works well, as described. A decent choice with no big issues.

Cons: Relatively short cords. Power interface atypical and a bit ambiguous as to what direction to plug it in. Power plug bulky. A bit pricey but not terrible.