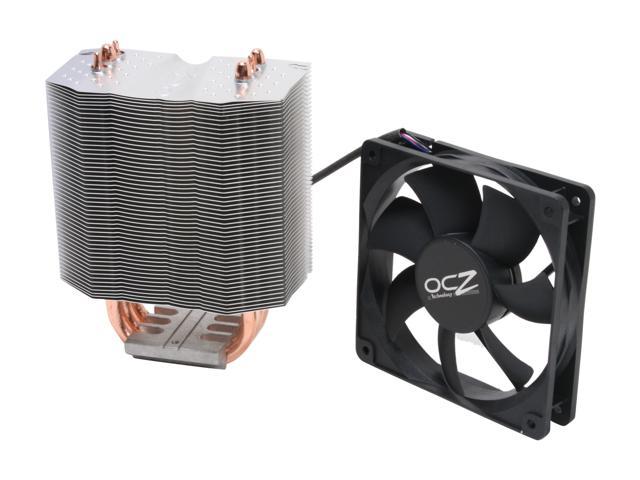 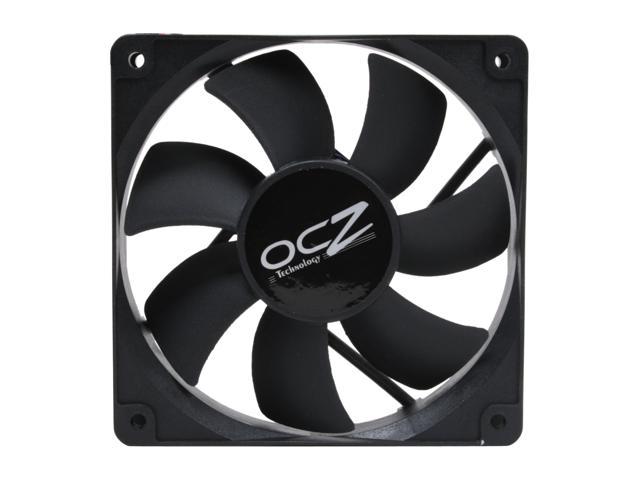 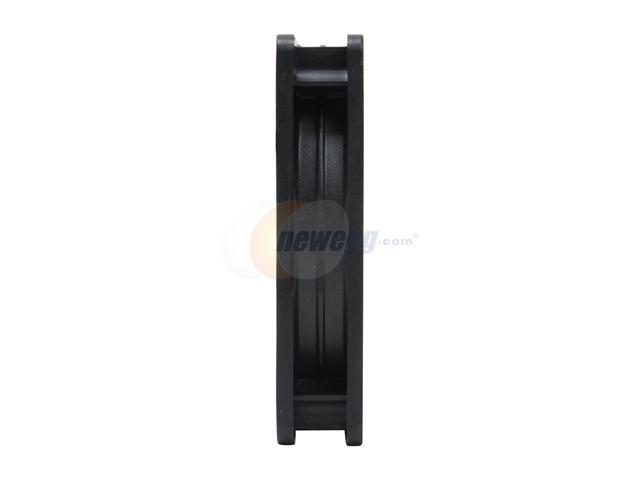 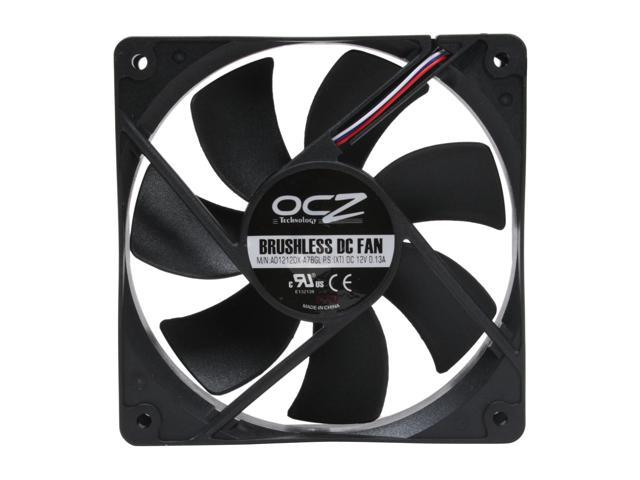 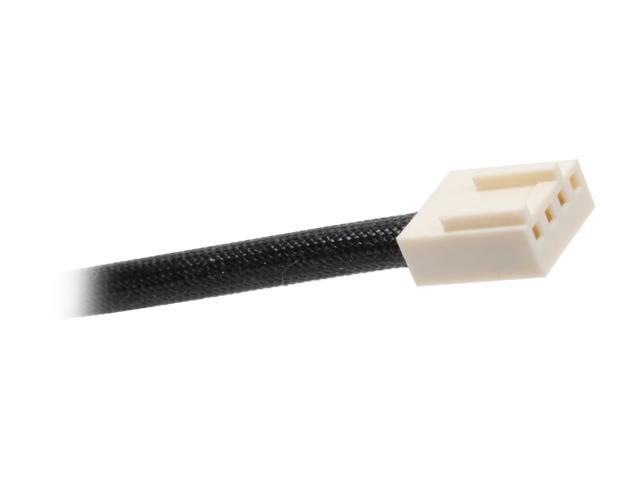 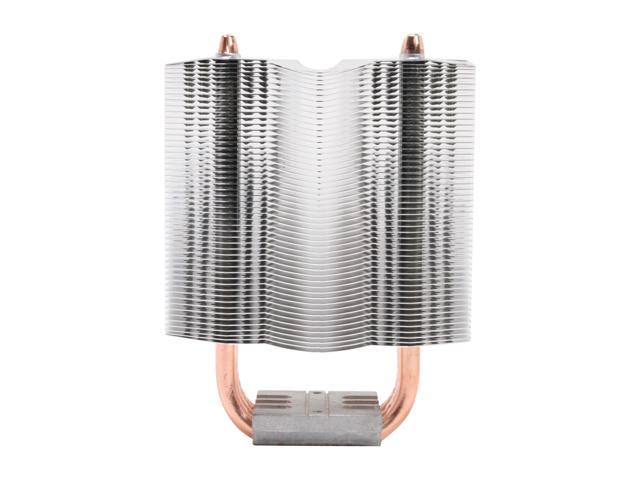 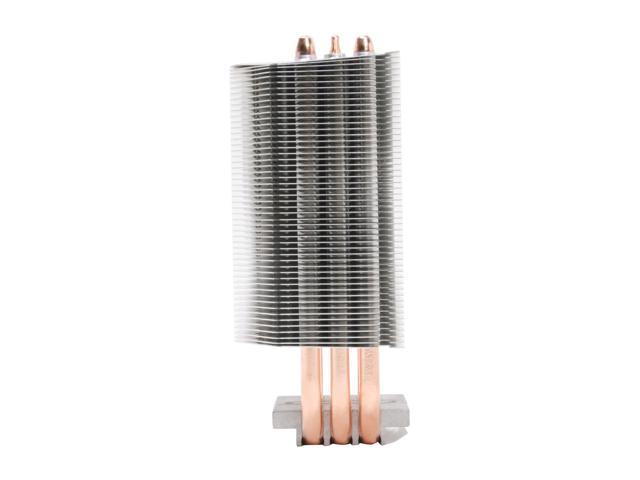 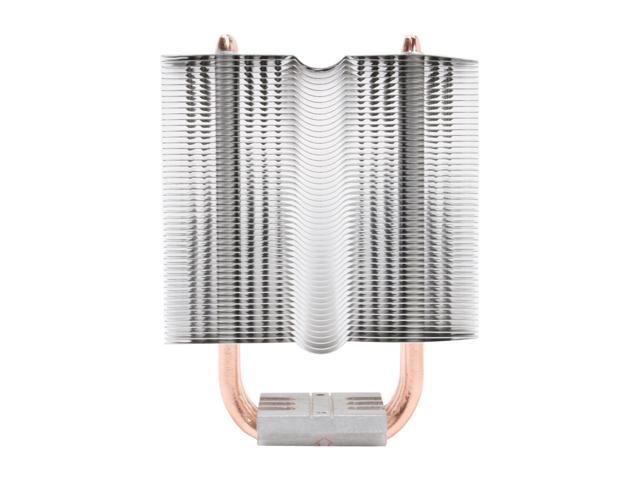 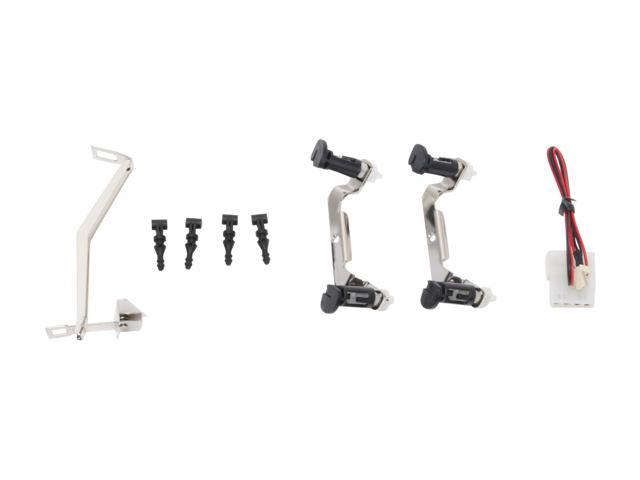 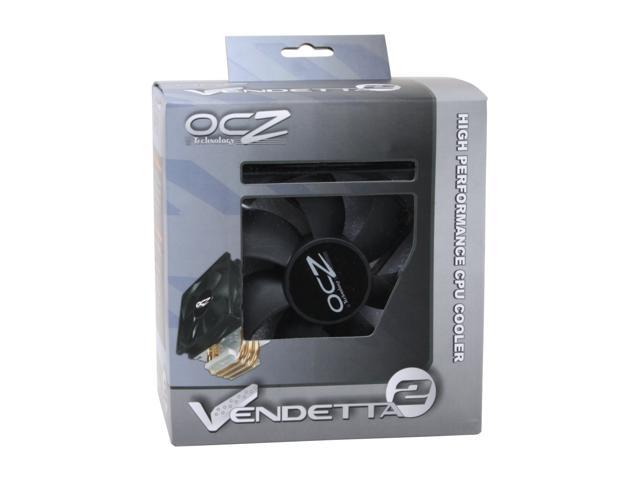 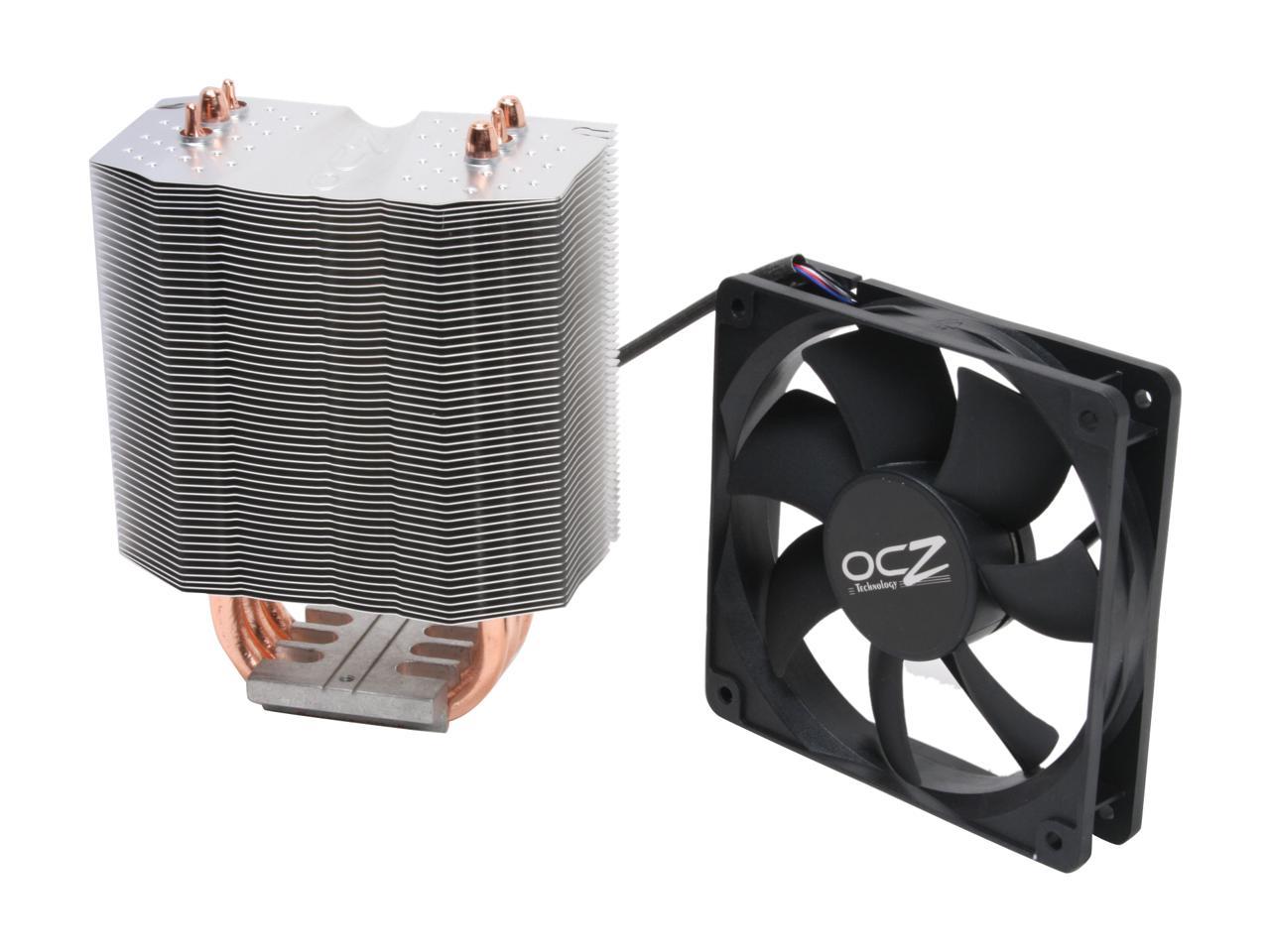 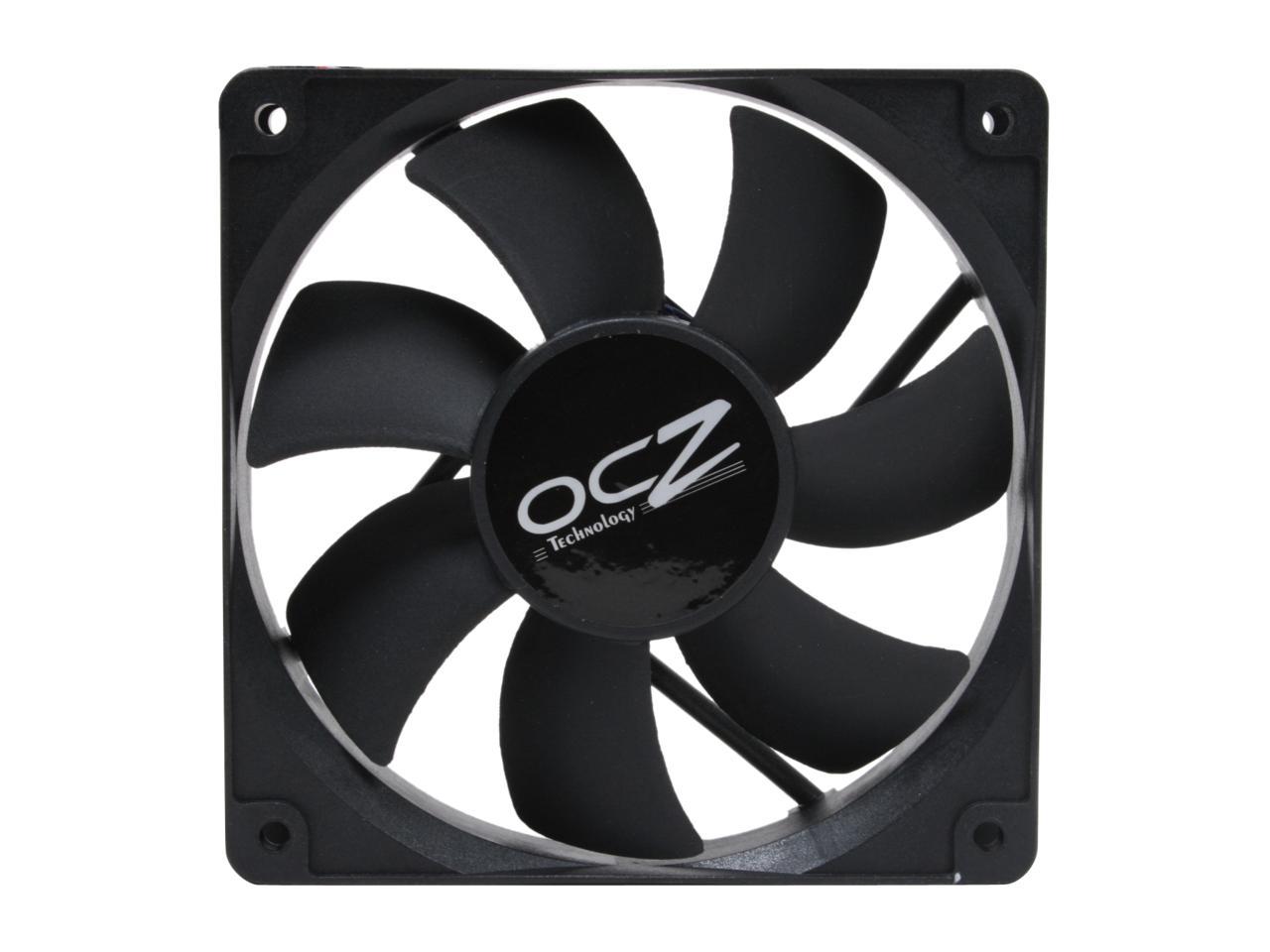 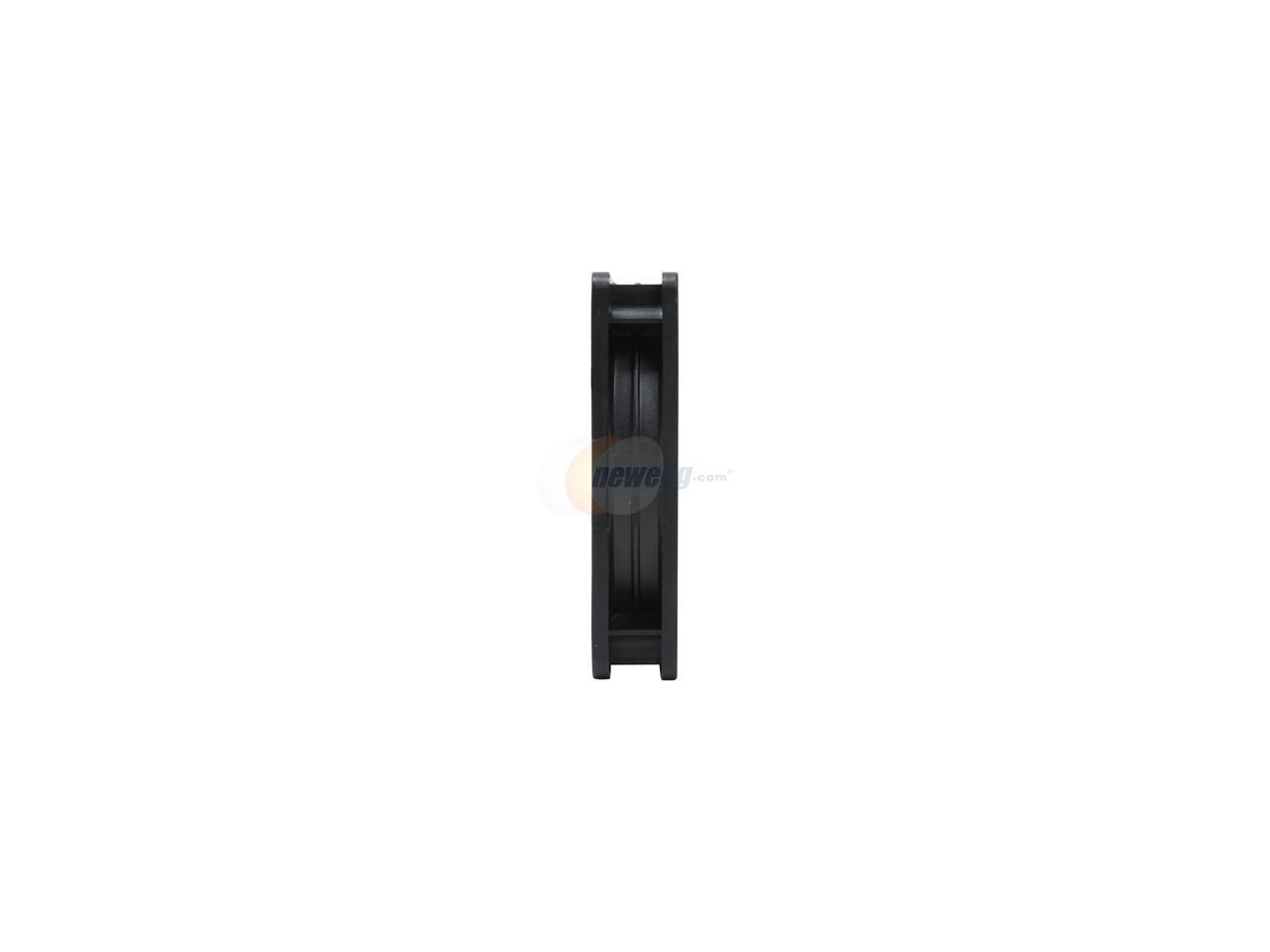 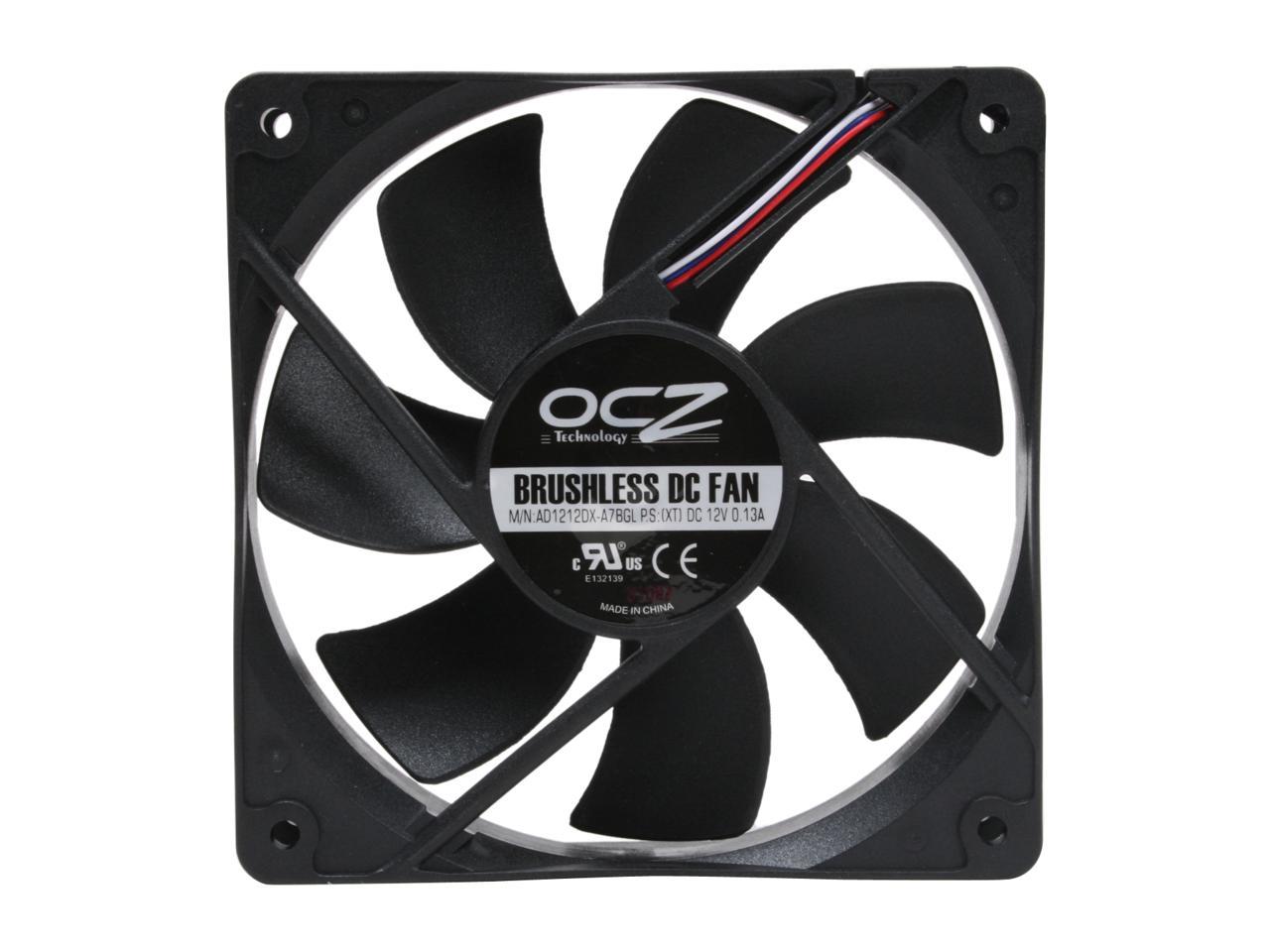 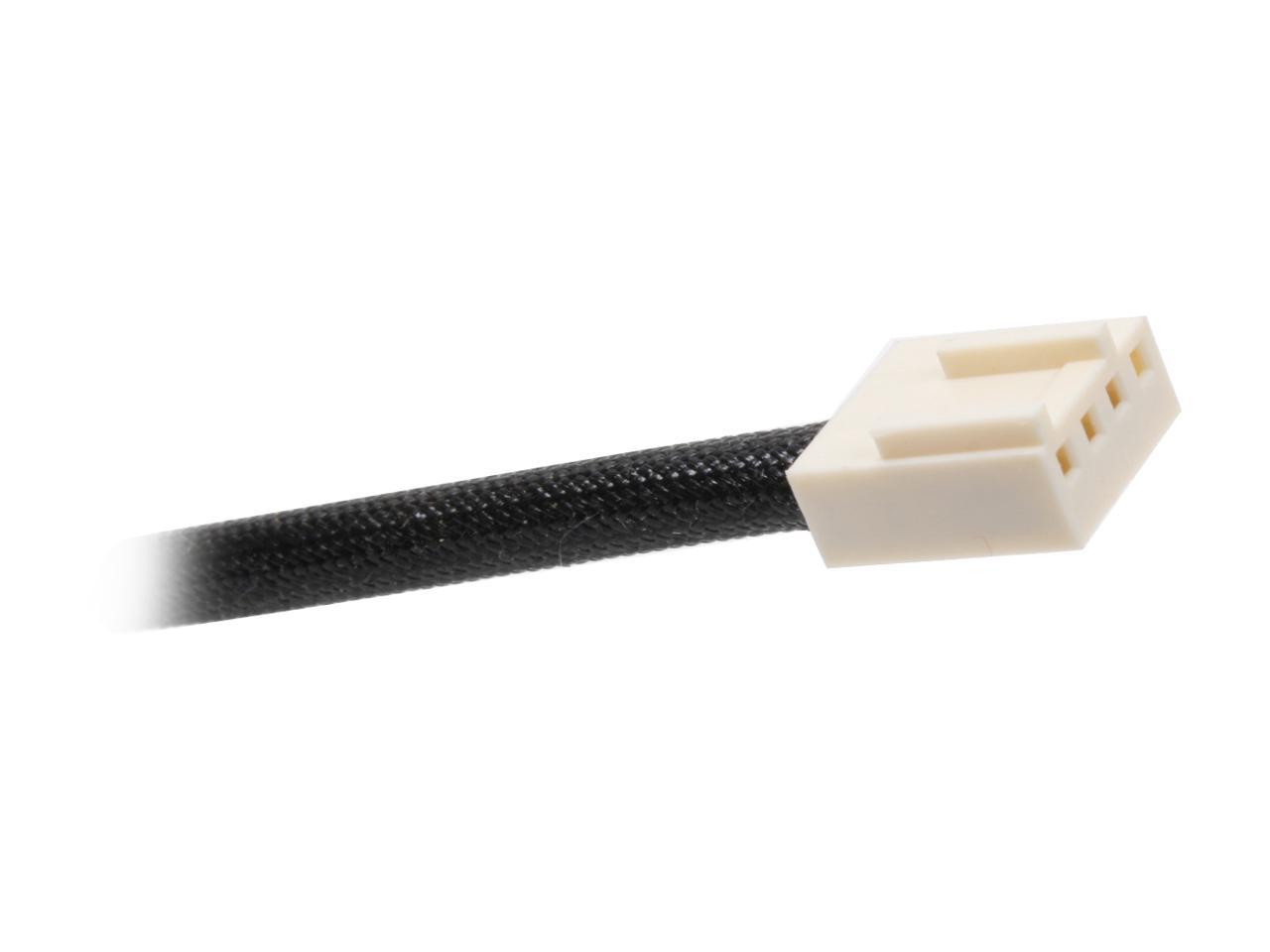 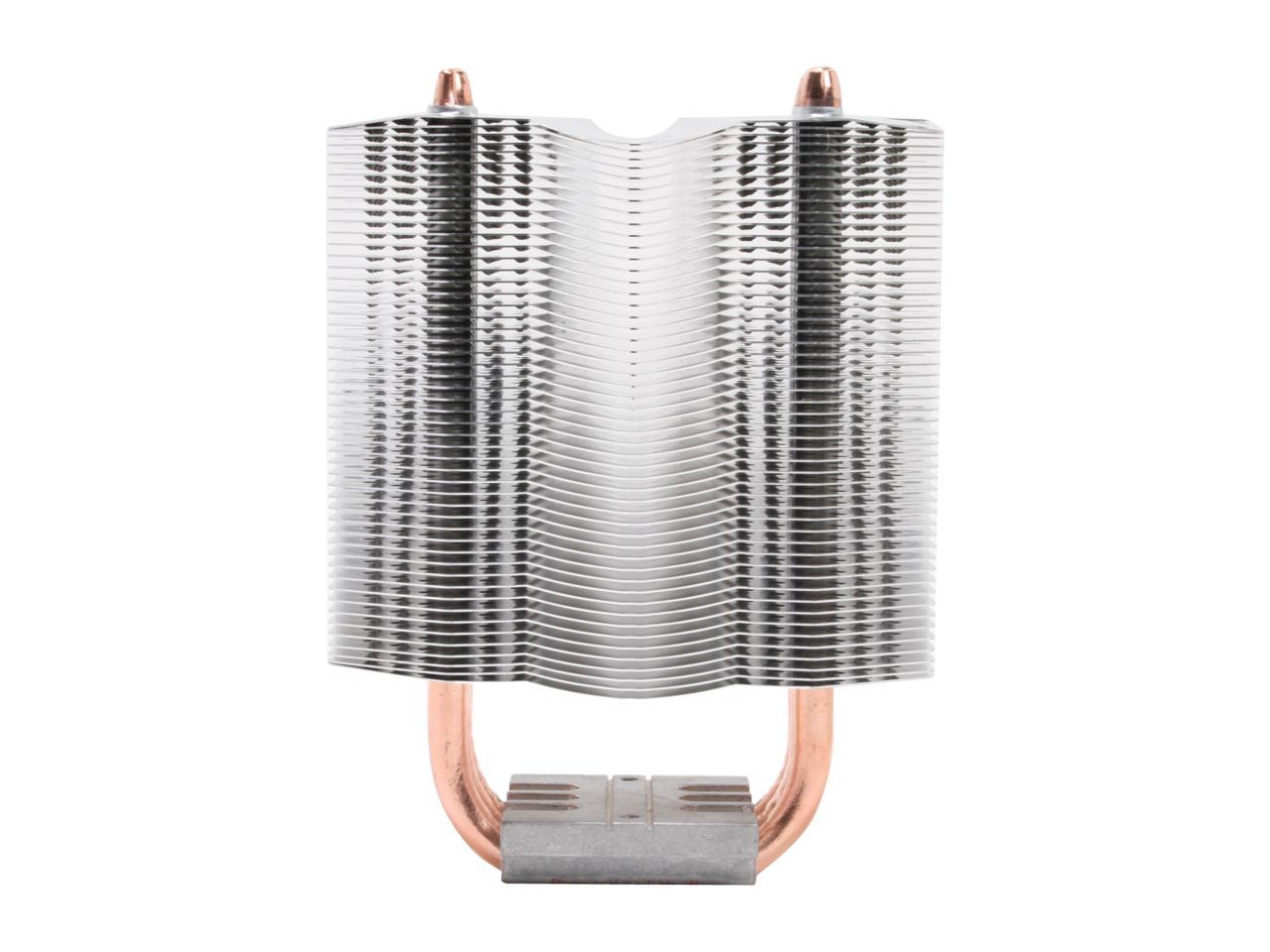 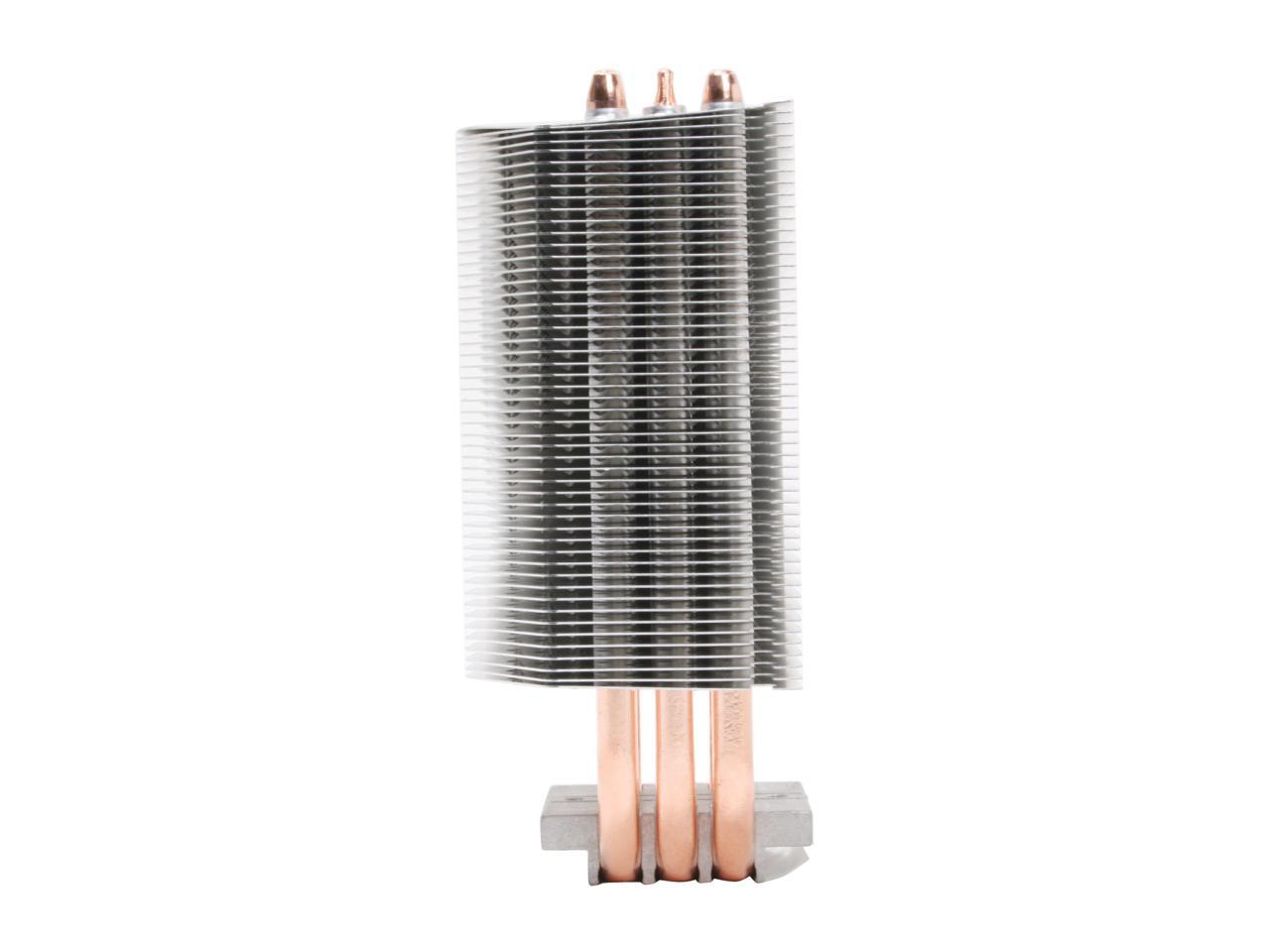 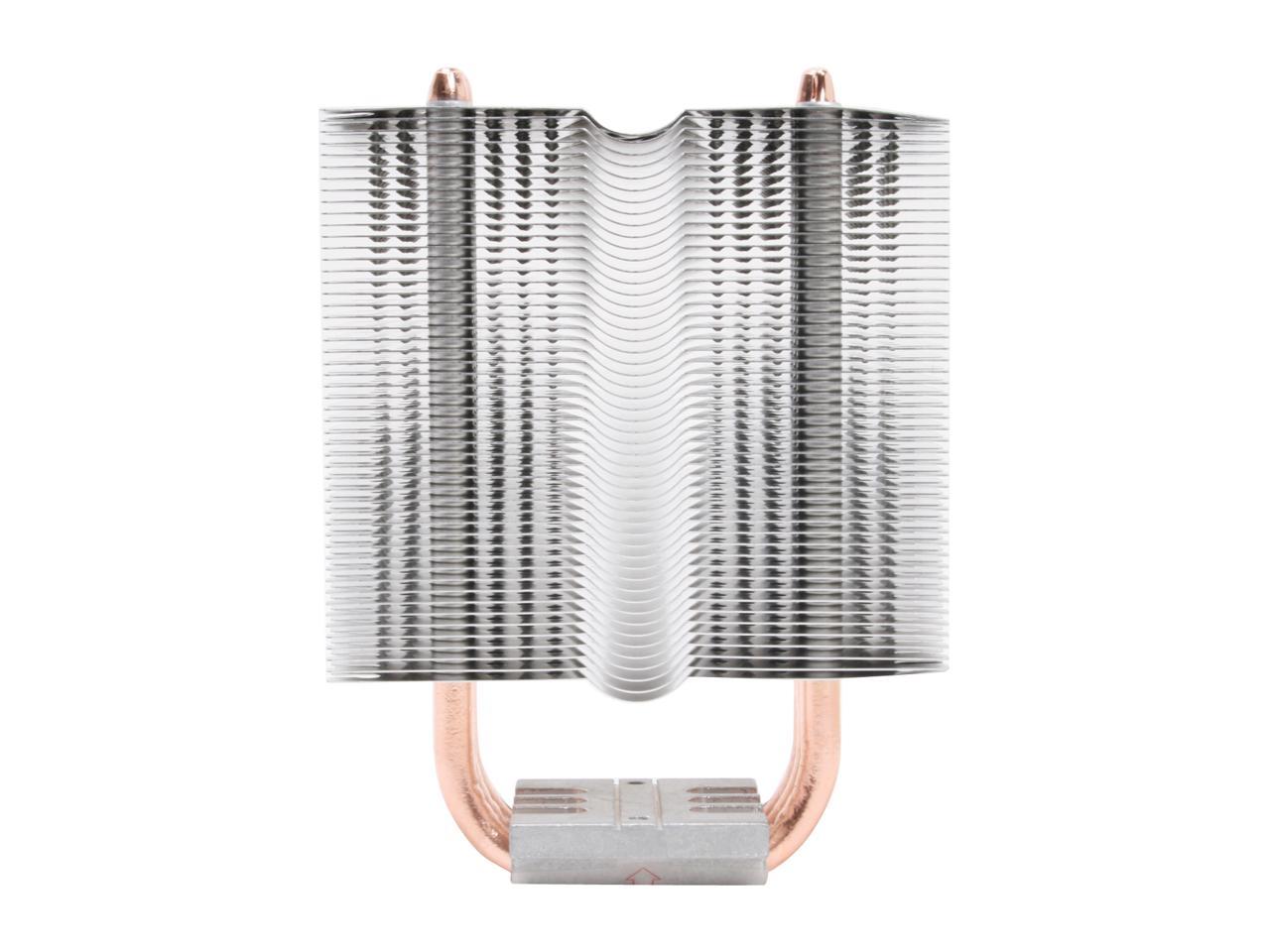 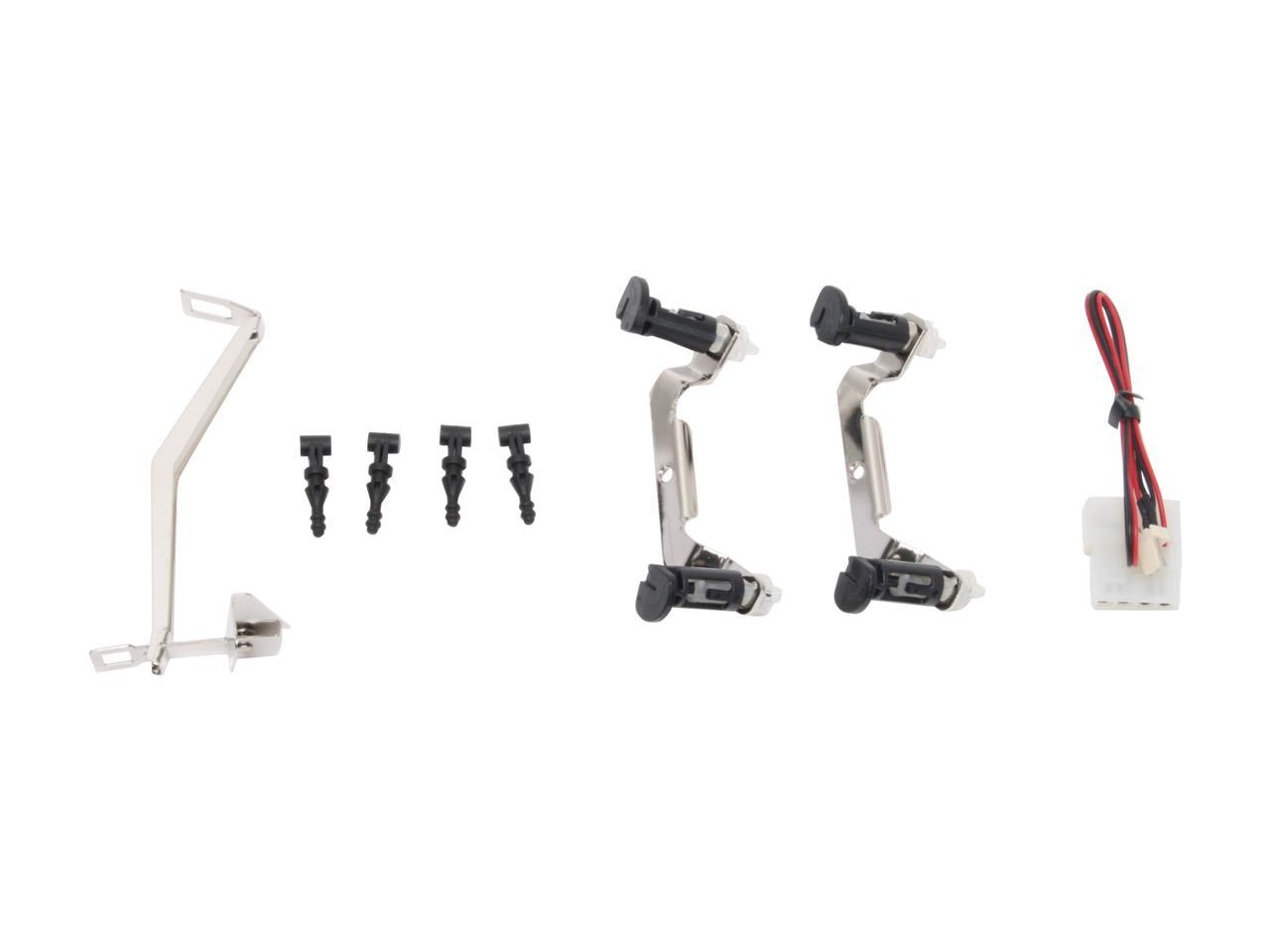 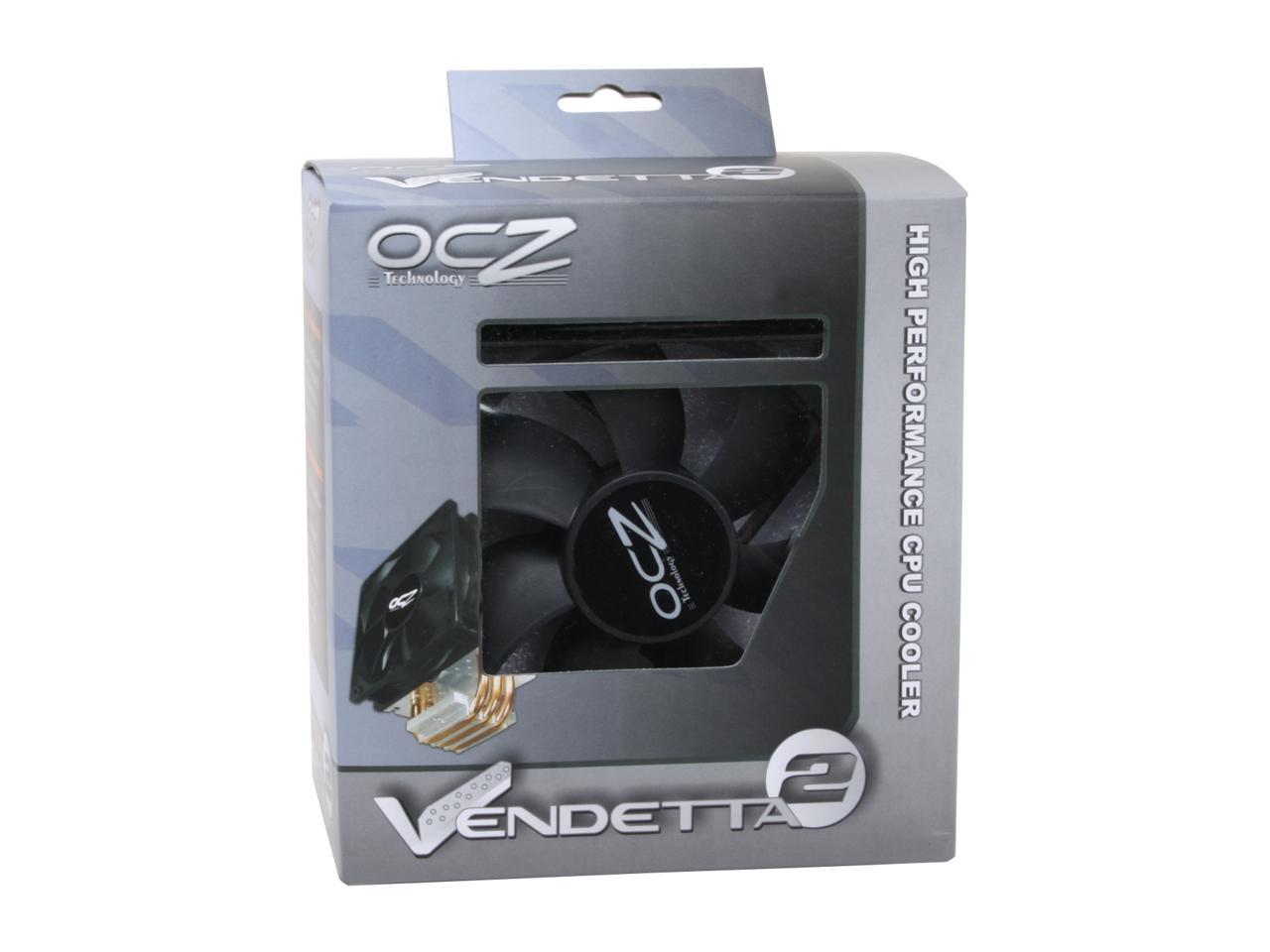 (75) Write a Review
OUT OF STOCK.
Overview
Specs
Reviews
OCZ calls their combination heat sink and fan CPU cooler the "Vendetta 2" and it attacks thermal build up with a vengeance. Vendetta 2's trio of 8mm copper heat pipes are configured to be in direct contact with the CPU for efficiently movement of heat away from the processor to the cooling fins.
And, while thermal transference is good, it takes a fan to get things properly moving along. The Vendetta 2 is rigged for silent running. The 120mm rifle bearing fan is attached to the vertical array of aluminum convection fins using vibration-damping rubber posts. It moves an impressive 81 CFM at its maximum 1500 RPM but only generates 32 dBA – as quiet as a library.
PWM functionality lets the computer's BIOS reduce speed and noise even further depending on thermal need. The fins are configured to allow lower velocity air to pass through with less resistance and, they have been dimpled to break up laminar airflow and add turbulence which creates more efficient circulation.

Pros: Heat Pipe Direct touch (HDT) is the newest design modification for these type of stand up coolers. All I can say is it works very well. Q6600 @ 1.44v / 3.6Ghz 60C 100% Load, for air it doesn't get better. My case is an Antec P182 and it fits no problem. Also you have at least a 10mm clearance of the DS3R Northbridge heat sink. The design comes from Xigmatek but there are a few modifications that make a difference, Turbulence caused by the small dimples on the fins adds to cooling performance. I love this HSF would gladly buy it again.

Cons: The Push pins, they are twice as hard to push in than any other I have used, This makes it a lot more secure than most but doing this inside the case carries a higher risk of stressing the contact between the CPU and heat sink, Do yourself a favor and remove the mobo first, same for the fan, attach it after you install the heatsink and also outside the case.

Overall Review: Benchmarkreviews.com did a very thorough review with this heatsink and many others using 1 x 120mm fan on all the heatsinks to eliminate the differences between fans. The Vendetta 2 beat them all. Get some OCZ freeze too, needs no cure time and its better than Arctic 5. Apply a small amount to each heat pipe on the cooler DO NOT put TIM on the CPU, it won't spread right because of the channels between the pipes. Always take off the heatsink after you install it to check what kind of contact you are getting before you rebuild your rig, saves time in the long run.

Pros: SERIOUSLY INEXPENSIVE for what you get. Quiet fan, plus speed control thru BIOS. Good packaging, reasonable documentation. AMD & INTEL mounting kits. Lightweight and yes.........it FITS! Installed on an Intel E8400 3.0Ghz ovk'd to 4ghz and temps are at 32 degrees idle. DOWN 4 degrees from having it's little brother installed, the OCZ Vendetta (1) The cooler is large but not big like my old Scythe Infinity, this is much narrower meaning there is more space to left and right of it than up and down. So the real trick is to make sure you have ENUFF SPACE FROM YOUR PSU!! Oh yeah almost forgot, IT DOES NOT COVER MY MEMORY SLOTS!! BIG plus for me!

Cons: Throw that supplied paste out OCZ, and include your own brand, OCZ FREEZE! Color mounting instructions with sectional blowups would help and include a retention support bracket, it's worth it.

Overall Review: OK now most are having difficulty installing the push pin locking mechanism on their boards. Here's some pointers that can save you headaches down the road. I have A BIOSTAR T-POWER I-45 in an LEXA Blackline case so space is TIGHT! What I did was install the fan on ONE SIDE of of the Heatsink (the side that faces the PSU) then clamp down 2 pins that are near the Northbridge chipset. This alleviates stress and bowing on that part of the mobo cause there is no standoff support at that spot, they should snap right on in! Then move to the top tow closest to the psu and appli pressure to goet those in. At the top of the board are two support standoffs so you can give a good push. Reattach the bottom of the fan and watch the temps come down! OVERALL LOVE THIS COOLER!!

Pros: Very quiet and efficient - my case fans are louder than the Vendetta's fan. Easy to mount. Cheaper than many top of the line air CPU coolers, especially with rebate. Rated very highly on several PC parts review websites.

Cons: The surface of the copper tubes that makes contact with the CPU has grooves from the grinding process. Reviews have gotten good results with no modifications to this cooler. This thing is huge so you may have space issues depending on your mobo or case. I had to modify my case to make it fit (Case is old and pre-LGA775). I would not rely on the thermal compound that comes with the cooler. I would invest in something better. I used OCZ Freeze.

Overall Review: I don't know why others are having mounting issues with this cooler. Looking at how the puspins work before mounting it, you can see they have a locked position and an unlocked position. If you push them in the unlocked position, they will pop out. If they are in the locked position, you will hear a click when the pin is locked. It will never come out after that unless you twist the pin to the unlock position. Because of the pressure involved, your mobo will flex a bit but I did not encounter any problems. If you forsee any installation issues, get the separate mounting bracket and avoid the pushpins altogether.

Pros: Good cooling capacity, not as big as some other brands (will fit more easily in the case). Very silent at 100% CPU usage 24/7.

Cons: Very confusing manual (see below). The guy who wrote it probably never tried to put that on. Rubber fasteners need a bit of soap to get them through fan holes. Heatsink base's surface is smaller than surface of the CPU (the edges of my X4 processors are sticking out). I do not know if it affects the capacity of the cooler, but I would feel much safer with the whole surface of the CPU covered.

Overall Review: Do not follow the manual - you will not be able to put it on. Installation for AMD x4 Phenom: Step 1: Get the rubber fasteners through the holes (use soap if it is too tight - believe me - it is, I spent like 10 minutes with that) Step 2: Put the fan on the heatsink. Step 3: Decide if you want fan on top, or bottom !!! Depends on your case. Step 4: Put the thermal grease on the base of the heatsink and spread it around the whole surface. Step 5: Put the heatsink on the CPU, make sure the edges of the CPU are sticking out (because they will) approximately the same distance on both sides. Step 6: PLace the AM2 clip on and check the fitting of the heatsink again - has to be in the middle, edges of CPU should stick out onlu a bit from both sides. Step 7: Hook the clip on the bracket and check the central position again.

Pros: With E8500 cpu OC'ed to 4.05 GHz temps are 36c idle and 41-42 gaming. Easy fit on my Gigabyte EP45-UD3R board. Fan is very quite. Push pin design so you dont have to remove your motherboard to install this cooler.

Cons: Push pin type is a con for some and I must admit it was a bit of a pain to get it installed properly but the key is to get the white plastic section of the pins through the mobo before pushing down on the black section of the pins. If you follow this rule the last push pin will be a lot easier.

Overall Review: Install fan before installing heat sink on the mobo. Apply a small amount of grease on the rubber fan mounting plugs to make it easier to insert the plugs into the fan.

Cons: It's pretty bulky, had to play around to get it to fit with my aftermarket northbridge cooler

Overall Review: This cooler is well worth the investment.

Overall Review: This is a great, cheap CPU cooler, but make sure of two things. First, your case needs to be pretty big for this monster to fit. Second, the mounting system is really scary to use if this is your first CPU install, it takes a ton of pressure to put on. Maybe I did it wrong, but when you are fooling around with 400$ worth of electronics, it should be foolproof <- that's me!

Overall Review: A great cooler for the price and weight.