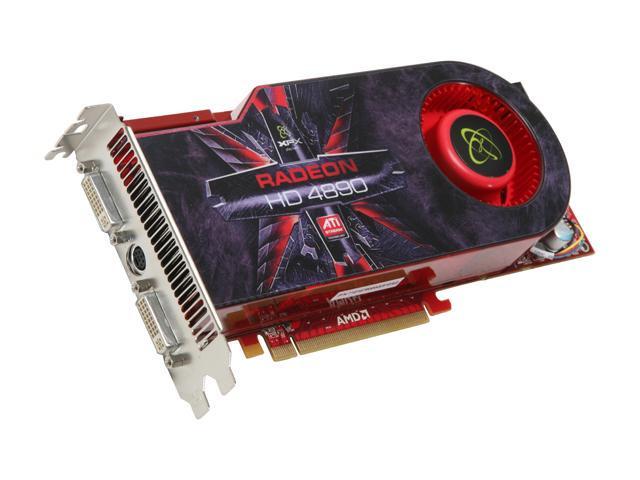 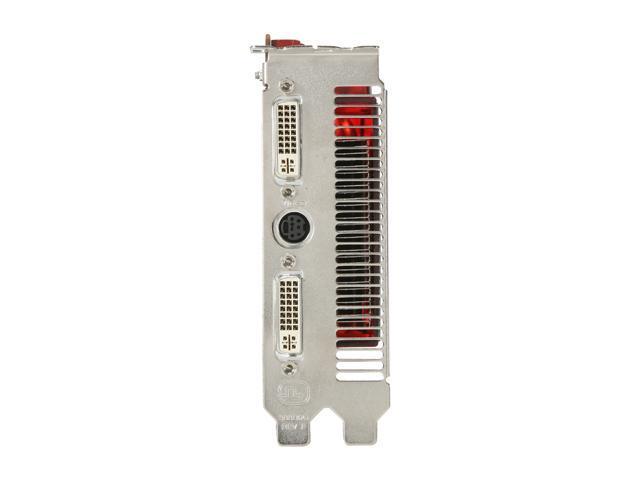 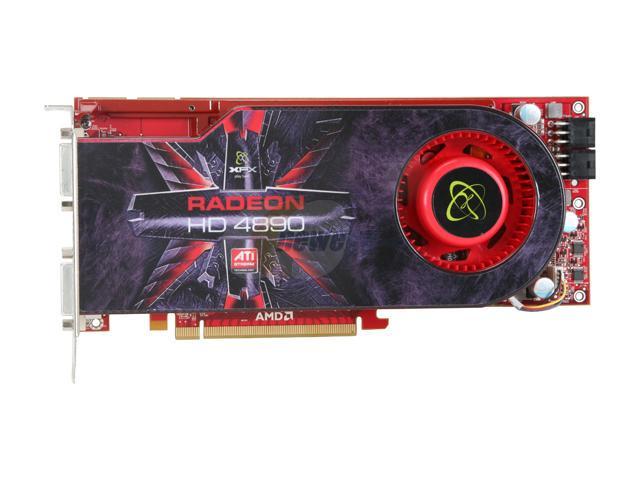 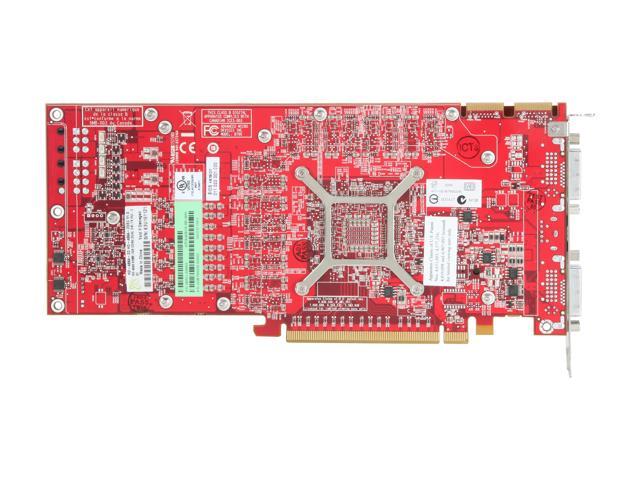 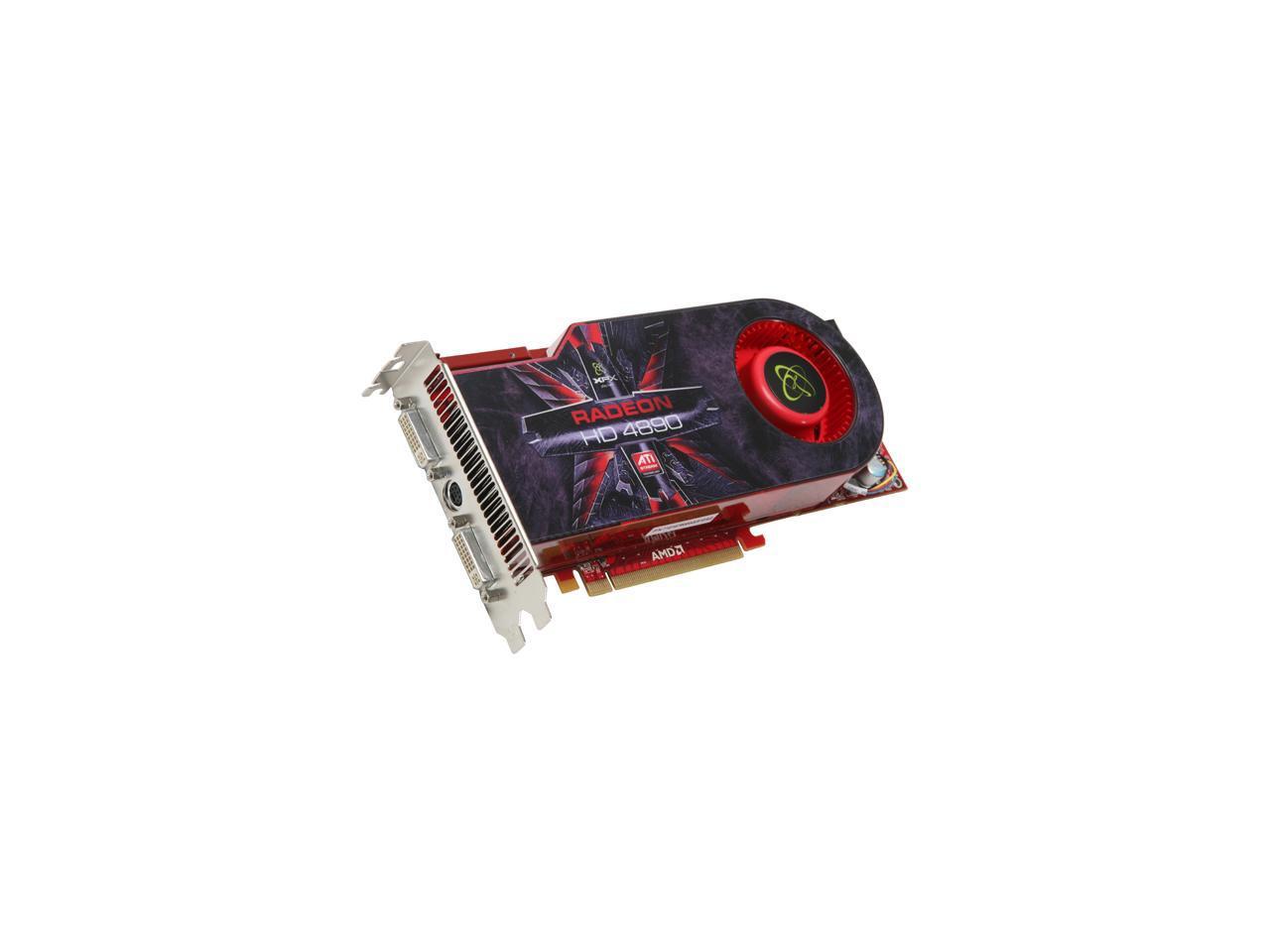 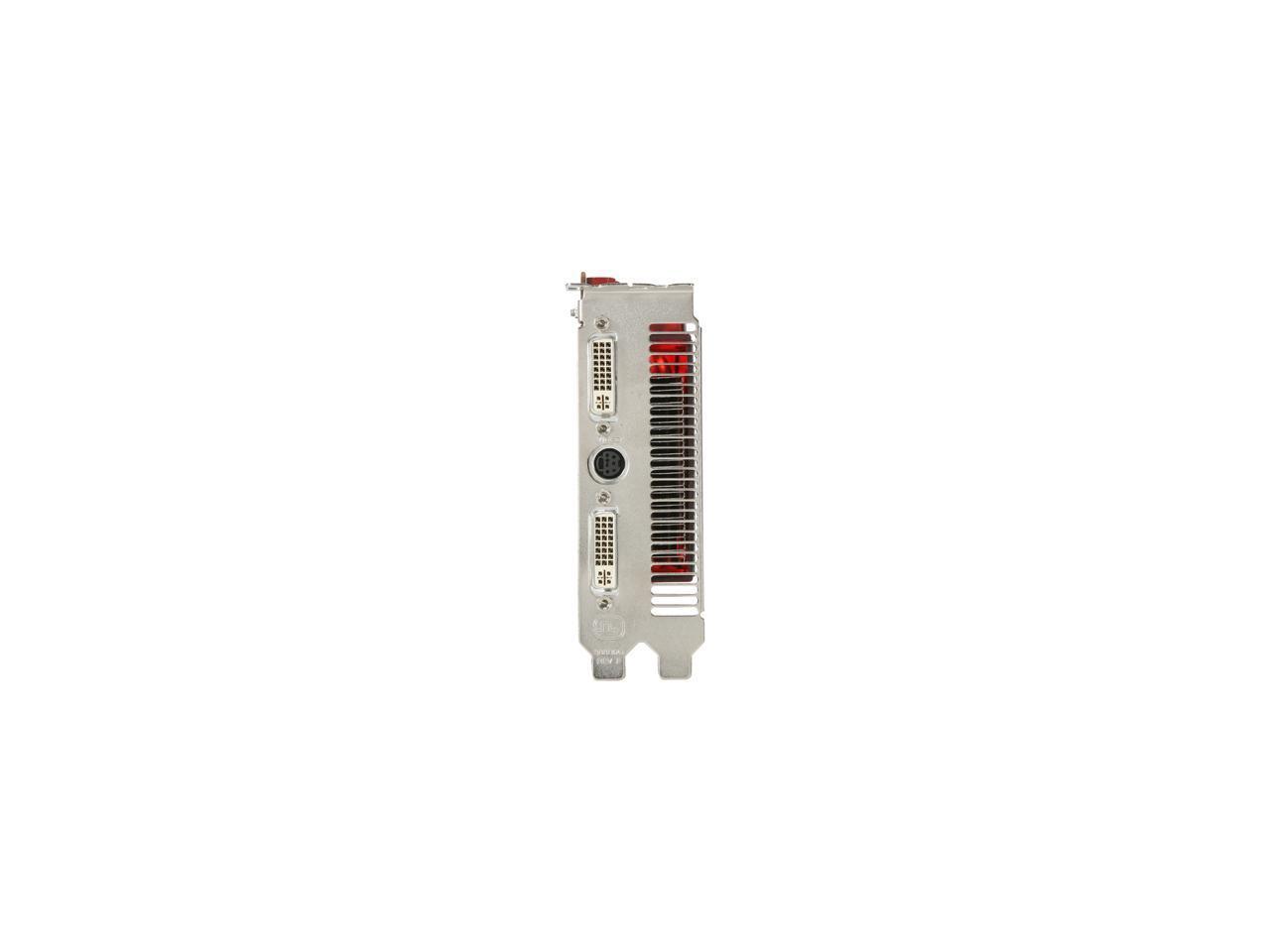 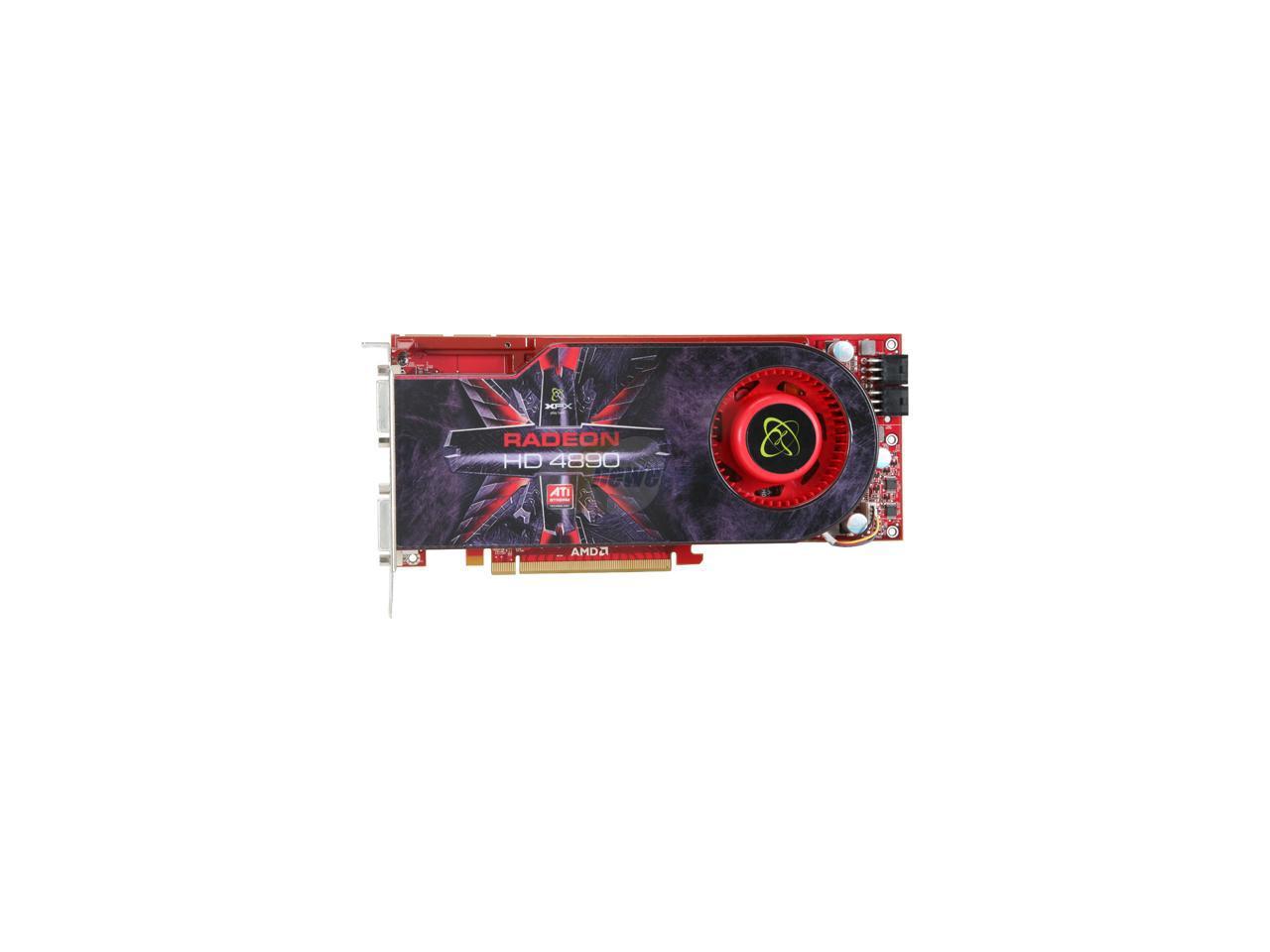 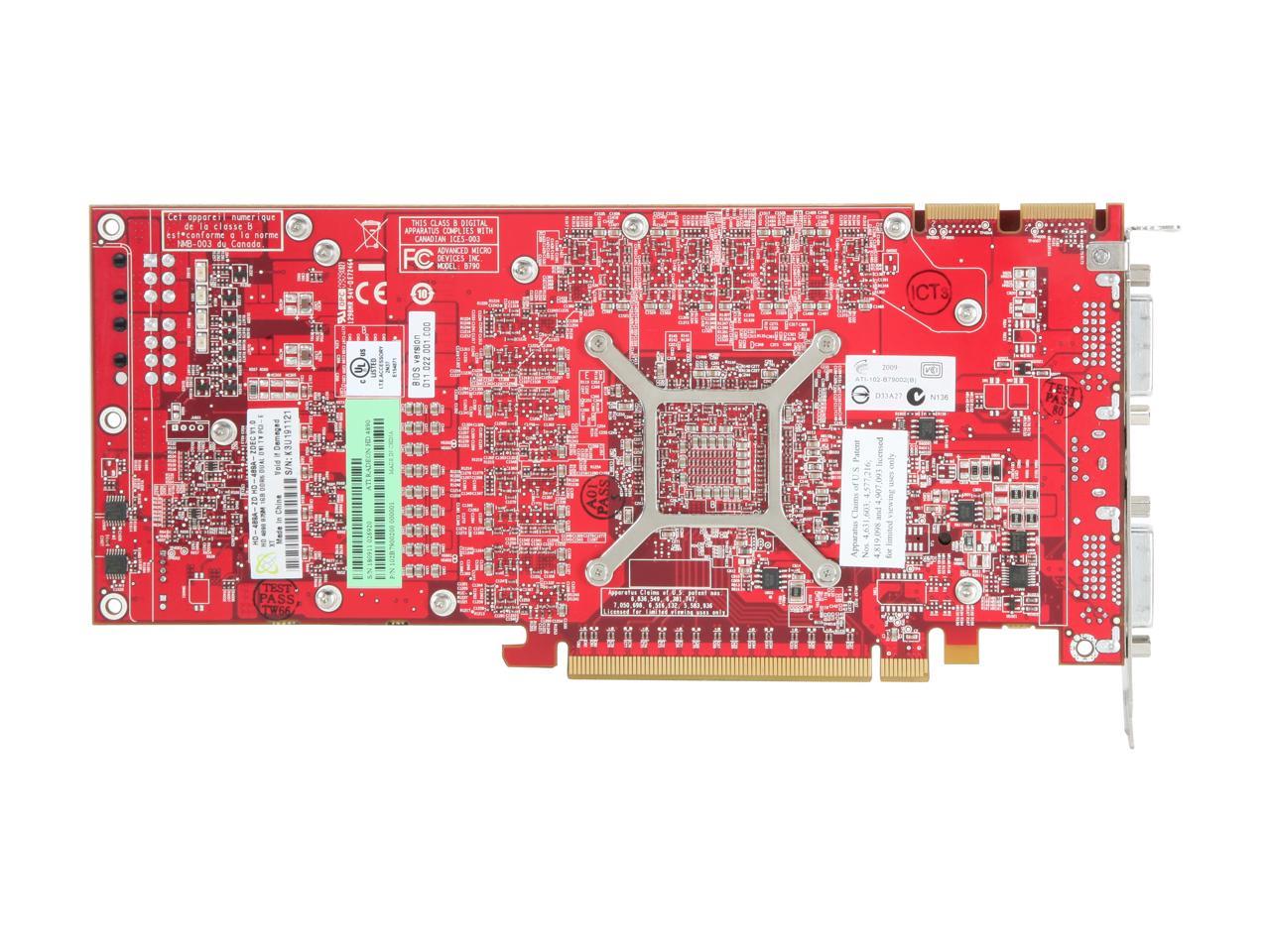 (60) Write a Review
OUT OF STOCK.
Specs
Reviews

Learn more about the XFX HD-489A-ZDEC

Pros: I have two of these in CrossfireX configuration. I was able to get to 1GHz on single card but not two in CrossfireX mode (975 MHz on both). I migrated from two hd4870's and was nice boost but not huge. Single 4890 card seems to equal dual hd4870's but Crossfire of hd4890's on gives about 25-30% more than single card. The big difference with the 4890 over the 4870 card is stability and ability to overclock and still be stable. Boards seem to run about 8C cooler under load.

Cons: Standard stuff- two fans running at 60-80% is pretty noisy but I use headphones for gaming so this is a minimal problem. If I am watching a movie or have to talk on phone I just hit my quiet profile in CCC and fan drops to ~20% with almost no noise.

Overall Review: Great card stable in both windows 7 and Vista 64 with 9.5 drivers. I think one card is enough for 99% of users. I have a home business doing Nastran FEA analysis and modeling and 3D rotations require significant video resources hence the two cards + its tax deductable.

Pros: Nice card. I run 3 characters in Eve Online with all three maxxed out in glorious space eye candy. I've thrown just about everything else at it, full bore, without a hiccup. Straight out of the box no muss no fuss and it loves Vista 64. Oh, and the heat is blown out the back outside of the case. I don't know what you guys are complaining about in regards to noise (quiet as a mouse).

Overall Review: WooHoo! ATI got a new customer. Also, How about a thumbs up for Newegg!!! They are the bomb when it comes to customer service. They're really great. Thanks Newegg.

Cons: -Tom Clancy's HAWX is quite possibly worse than the first SIMS. -Installing drivers from ATI (the updated ones) was a pain. -For some odd reason , when recording with Fraps, I could get a constant 70+ fps with my 8600gt, with this? i could get 200+ but it keeps doing this lag thing dropping to 2-3fps for 10 seconds.

Overall Review: I'm giving it 5 eggs because its the ultimate gamers card for the medium budget guy. There is nothing wrong with this card. However, I must say...it is quite long, make sure you have room.

Pros: Performance: I've run the following games at maximum quality at 1650x1080: GRID, Crysis, Company Of Heroes: OF, Assassin's Creed. Every game plays very smoothly with amazing frame rates. GPU Temperature: The GPU temperature remains pretty low with the automatically controlled fan never going over 40%. Runs much cooler (20-25%) than it's predecessor, the Radeon HD 4870. This card's idle/load temperatures are comparable to it's competition. Cooling: This card does not add a significant amount of heat your case. The great majority of the hot air is blown out the back of the case. I have one case fan, and cooling is very adequate (MB/CPU temps of 40c under load). Warranty: Lifetime limited. What else can I say?

Cons: Power Consumption: Uses about 17% more power at idle than the GTX 275 (this card's main competition), but they use roughly the same power under load. Girth: The dual slot cooling design obviously costs you a slot on your motherboard. However, it's a good cooling design as it blows the hot air out of the back of your case, instead of blowing the hot air into your case. Overkill@1650x1080: If you are on a budget, this card is probably overkill for today's games running at my resolution of 1650x1080, but I had the money and wanted to future-proof the system as much as possible.

Overall Review: The noise the card makes is not an issue. That is, this card doesn't make enough noise to factor into the average gamer's buying decision. To elaborate: Reviews for this card (by all companies, not just XFX) say that the stock cooler is too loud. This made me hesitant to buy as I am pretty sensitive to the sound coming out of the chassis. This is true, at speeds over 40%, the fan noise becomes noticeable. At fan speeds of 100% (set manually) the noise is quite loud. However, under load at 1650x1080, the fan speeds never get near 40% and as a result my CPU fan and 1 case fan are much louder than the card. When I'm not gaming, the fan is silent as far as I can tell. If you are going out of your way to build a "silent" system, this might not be the card for you, unless you are waiting for an aftermarket cooler. But for the average user I wouldn't let the noise be a deciding factor in your purchase.

Cons: I love this thing too much, thats the only con.

Overall Review: Got a bonus game inside, HawX. Thats 60 bucks in itself. While your at it get the i7920. $1300 cheaper than the 9770 extreme and way way more powerfull! Its almost sad.

Pros: Fast card! Currently OC at 950 core and 1000 memory. was a nice upgrade from a 4870 512mb.. the extra vram deff helps at higher resolutions! Newegg rocks! they had this card at my door step within 24 hrs of ordering! standard shipping! their California warehouse is about an hour from my house :D Direct X 10.1! It is nice sense there are a number of games out there that support DX 10.1

Overall Review: Card runs great. I haven't had any driver issues. All my games run great and smooth. I do not think the xtreme edition is needed.. its only a 25mhz clock different from stock settings... and most of these cards seem to easily do 900 mhz out of the box.

Pros: Runs fast. My card has not had any heating problems. I manually set the fan speed to stay at just 32% and it keeps the card 50C idle, 65C load, which is very good for such a fast GPU. Also you have to love XFX's support and Double Lifetime warranty. I know that if I ever need some help, it's there.

Cons: It is very long, but all cards are these days. The fan isn't too loud and I can't even hear it over my other case fans.

Overall Review: I got this with a $20 rebate and forgot to send in my invoice with the rebate form. XFX was so fast and kind that they sent me a reply a week later informing me and requesting the needed invoice. I sent it in and got my rebate check the week later!

Pros: Great price and very good card. And as always excellent service from Newegg....no wonder I don't shop anywhere else! Card run's quite and runs my games (FO3, LOTR, ME) on max settings. Fan seems to be fairly quiet also...but then again I run a air conditioner in the background.

Overall Review: My Evga nvidia 260 stopped working after about 3-4 months, and I actually had been looking to get a ATI as they are suppose to work better with the AMD cpu's. I will test that out and perhaps update this at a later time.