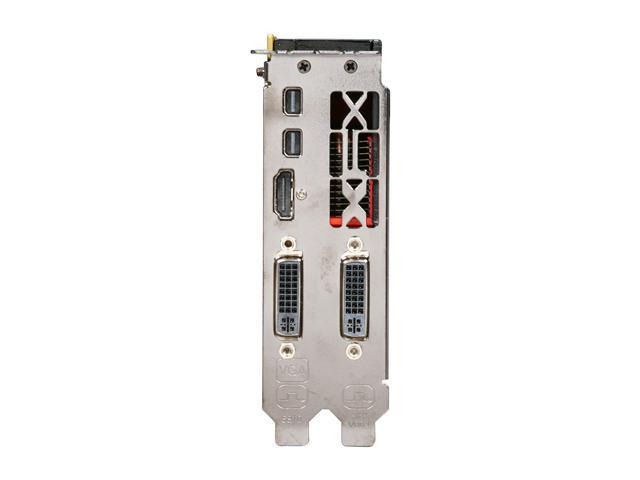 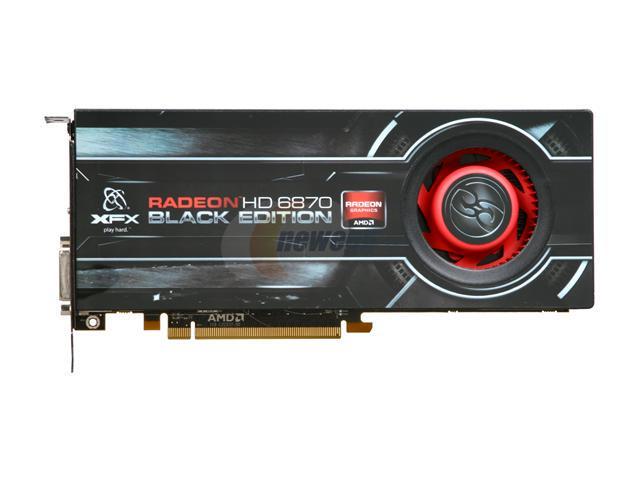 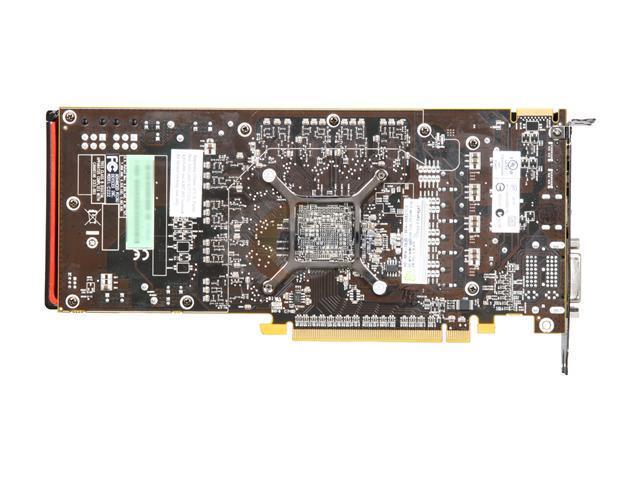 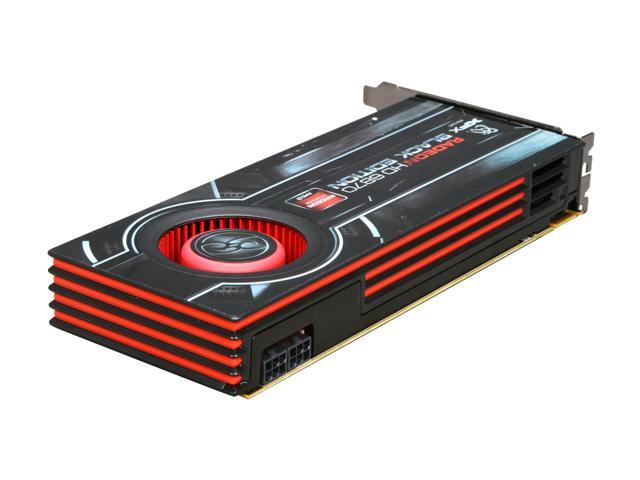 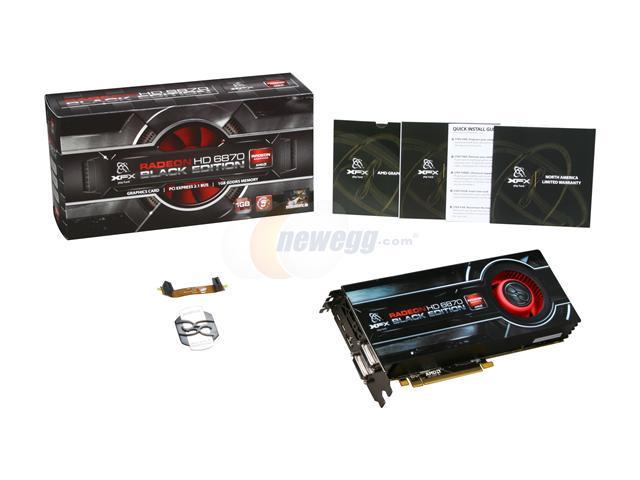 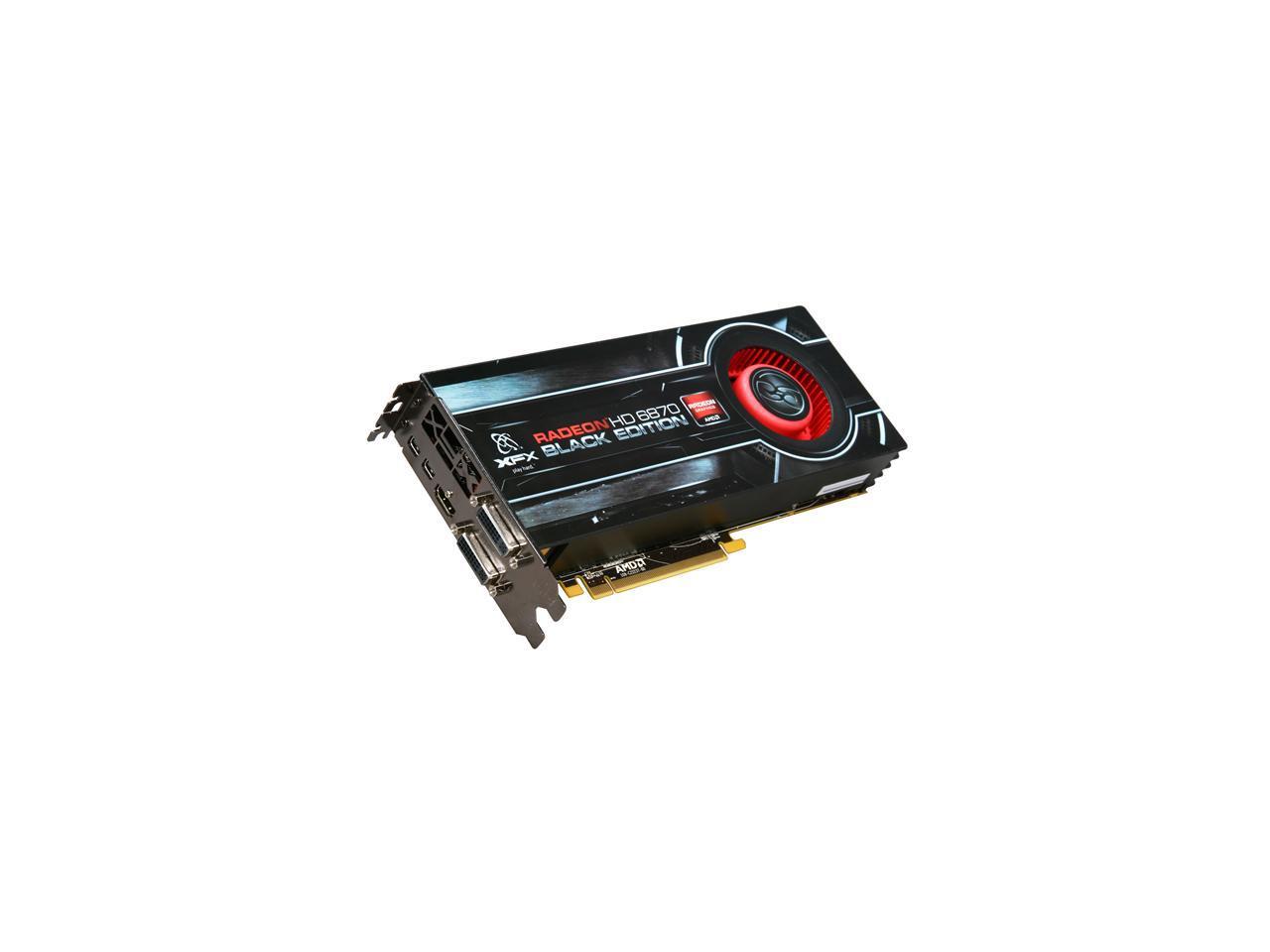 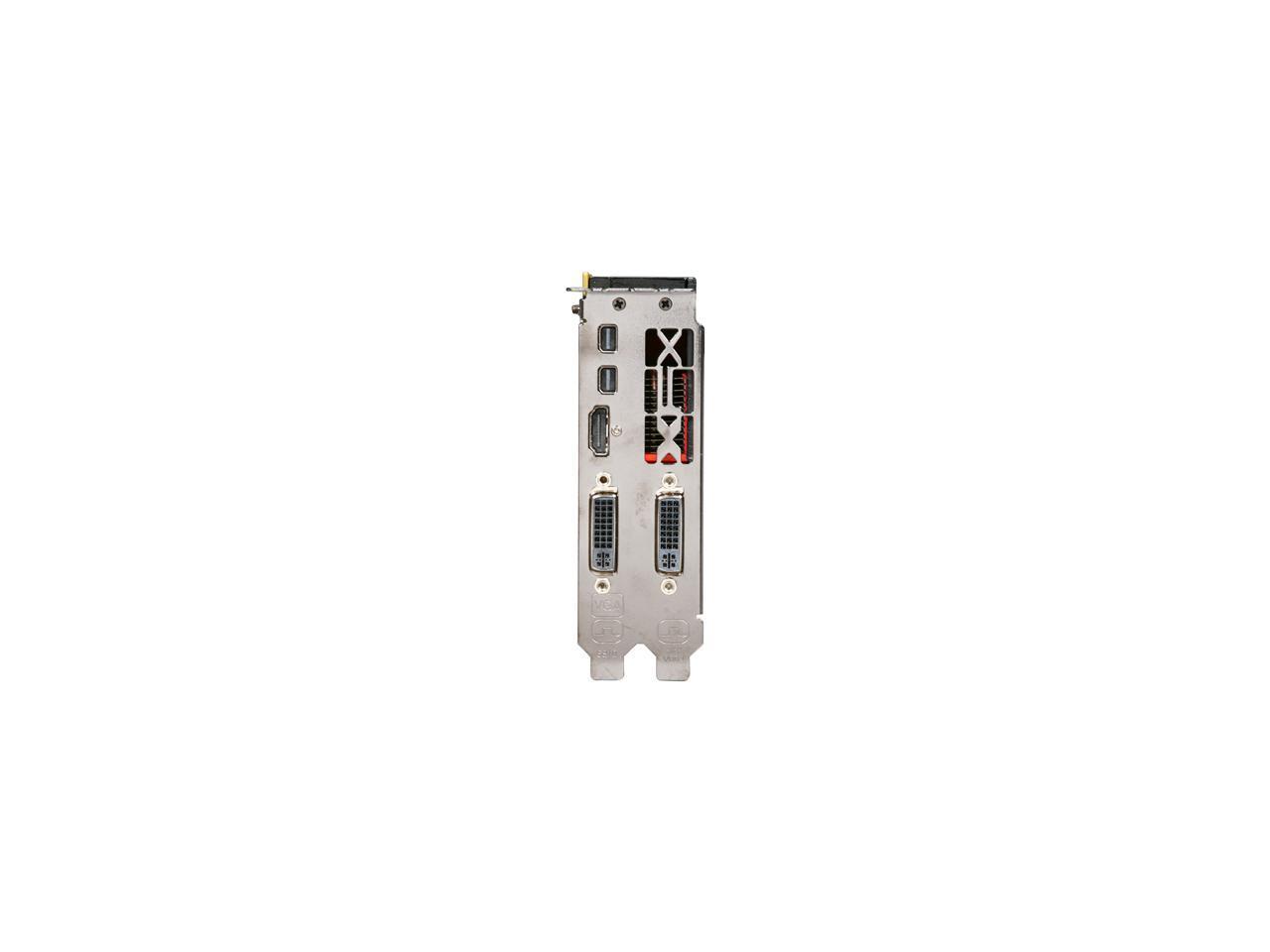 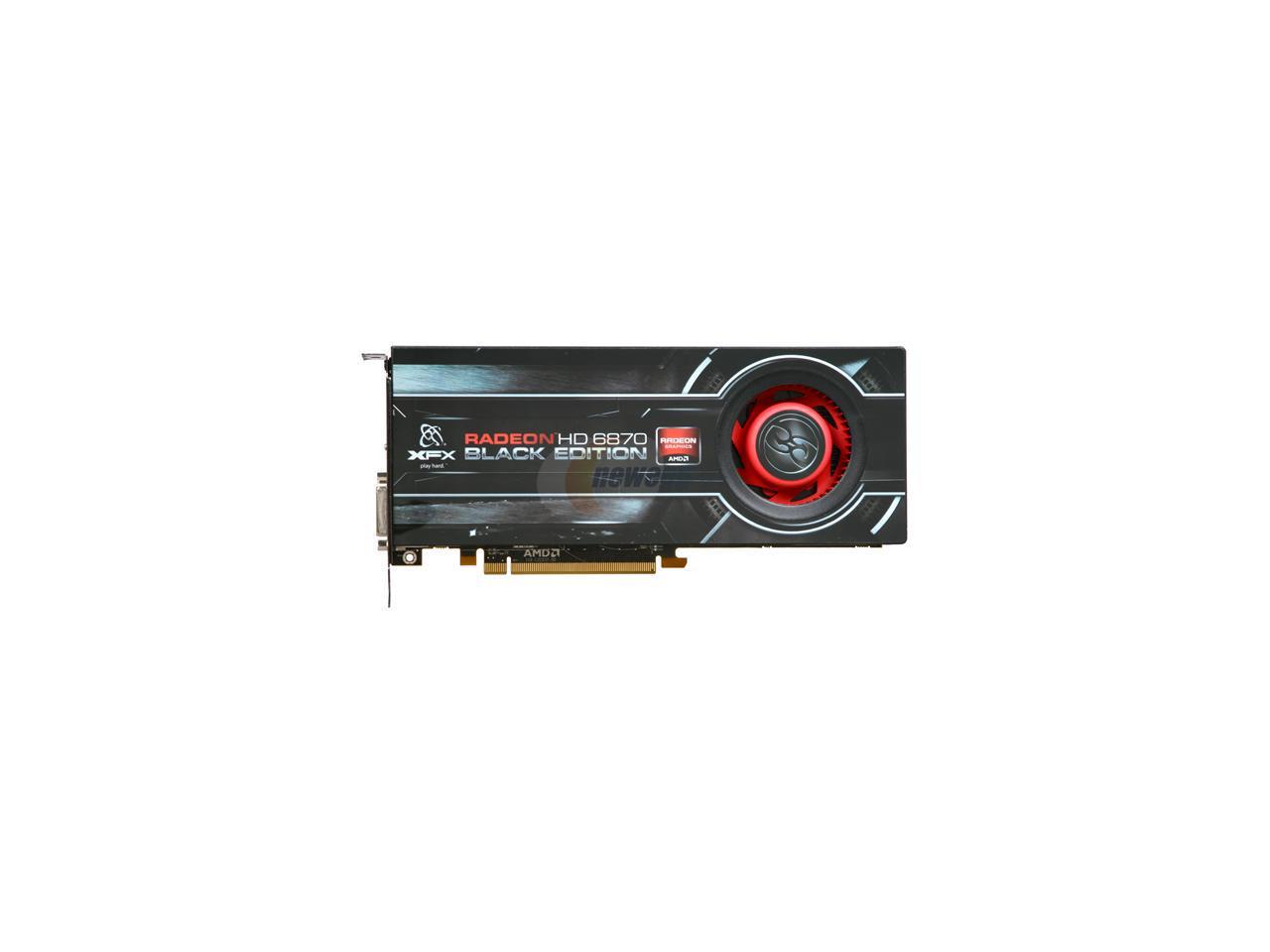 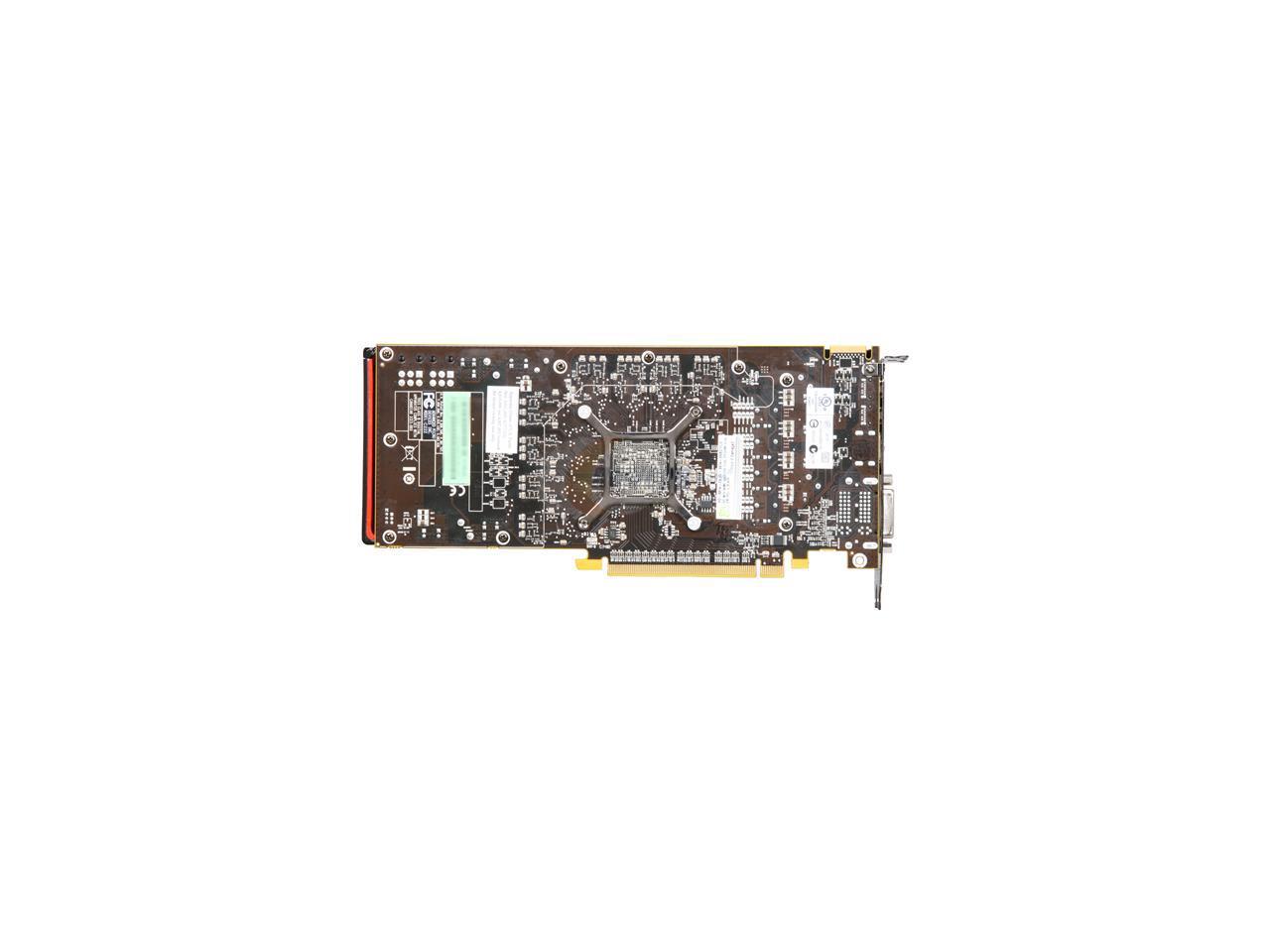 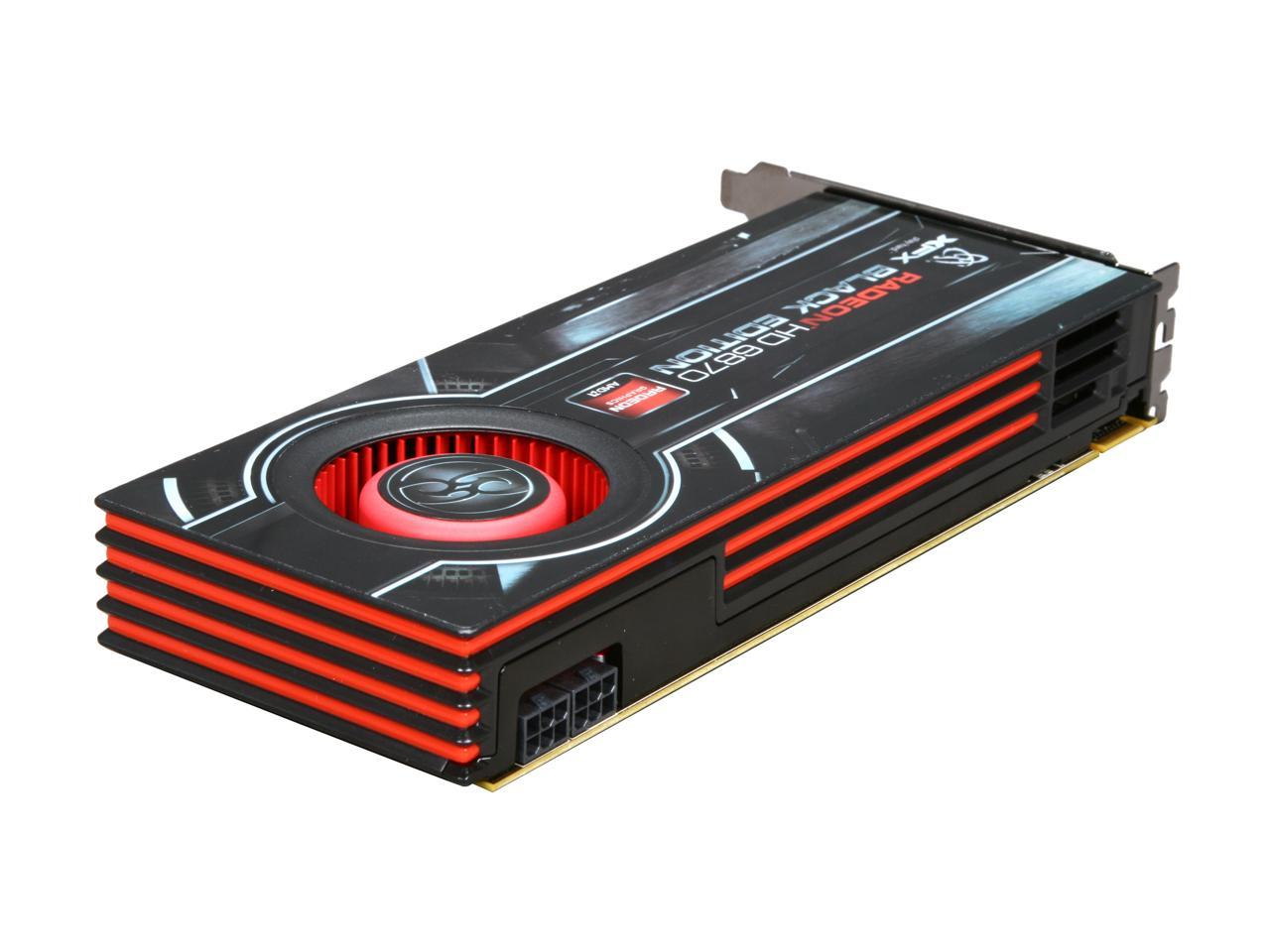 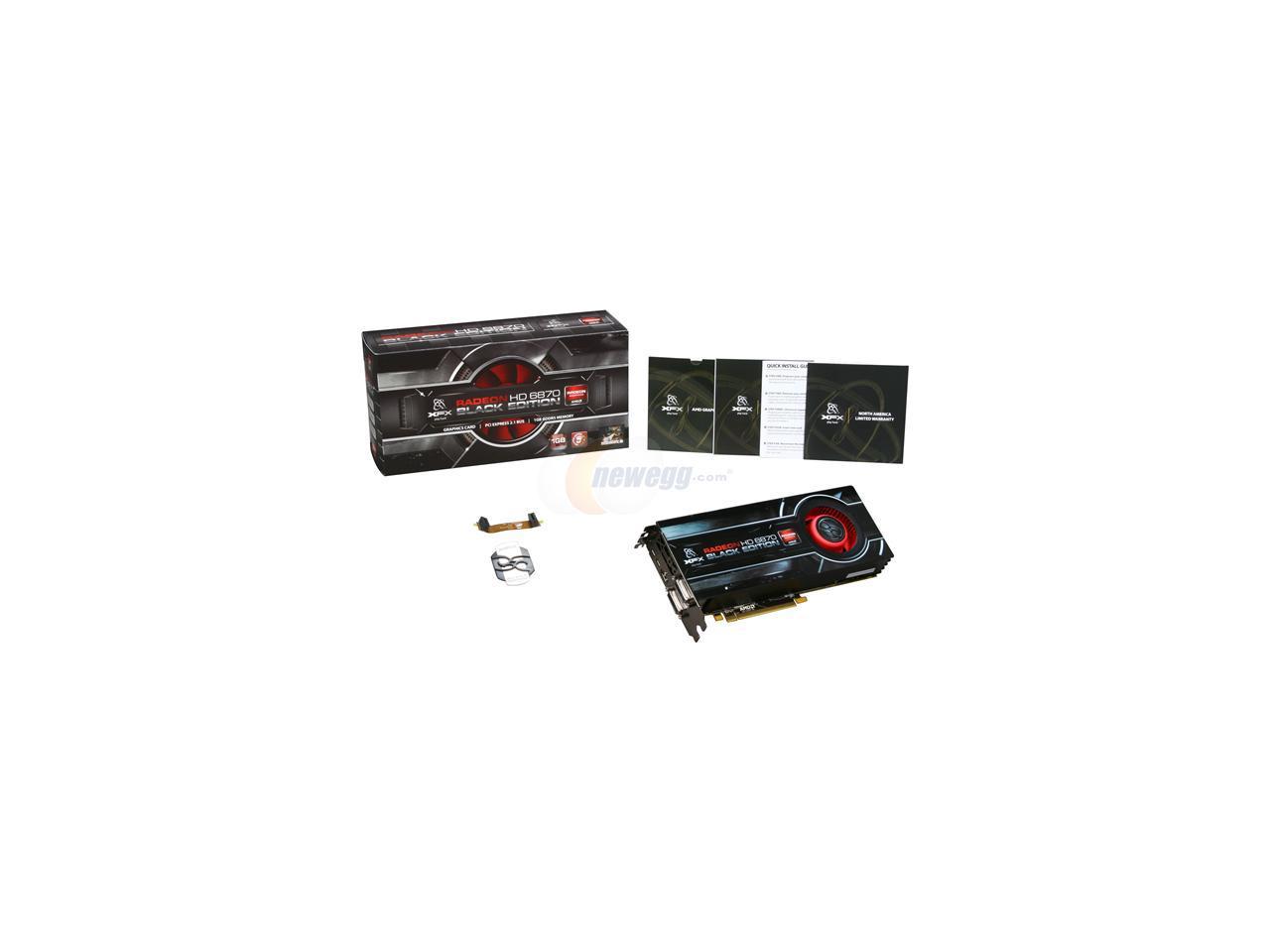 (81) Write a Review
OUT OF STOCK.
Overview
Specs
Reviews
The AMD Radeon HD 6870 is 3-D ready and one of the first HDMI and DisplayPort 1.2 solutions for Stereoscopic 3-D on the market. The AMD Radeon HD 6870 ushers in a new era of gaming that takes users to an entirely new level. The AMD 3-D experience is truly immersive and seamless. AMD has also teamed up with other Open 3-D ecosystem partners to provide consumers with more choice, more innovation and lower cost. Along with the new series XFX debuts the 3E Trilogy, incorporating AMD Eye-Definition (utilizing AMD’s HD3D technology & DirectX 11 for explosive performance and stunning effects), AMD Eyefinity (which supports multi-display gaming) and AMD EyeSpeed (improves video image quality and application performance for amazing visuals) technologies.

Learn more about the XFX HD-687A-ZNBC

Pros: Amazing speeds, it comes at almost 1GHZ (940mhz), and 1150 mhz for the RAM. That pretty much removes the one caveat that made this less powerful than the 5870, XFX's factory overclocks matches the RAM speed. Great stock cooler, when I took a peek in side, we have a few copper heat pipes that make direct contact with the GPU, the heatpipes travel up to a good sized mass of aluminum fins. For those that don't know, copper is good for transferring heat, aluminum is good for releasing it. So the design is really nice. Anyways, temps fall around 50C when idle, and in most games don't go much higher, usually they peak around 61C. Stress test facilities like Furmark may push the card into the 75C area, though even for a game, 75C isn't a bad temperature, let alone a stress testing facility. 85C and up is the area I would start getting worried at, so no issues with the temps. Even more overclocking headroom. I easily pushed it to AMD Overdrive's max, 1GHZ core, 1250mhz VRAM.

Cons: Really really long (lol). If you have a good sized case you should be fine, but if you have tons of PSU cables stuffed into it or something, you may have an issue fitting this in. It may also cover your SATA ports so beware. It's about 9.25 inches long according to my quick measurement. Rather puny stock fan on the heatsink. There aren't any temperature issues, but I'm sure a heatsink with a bigger and more powerful fan would probably be much better at dissipating heat. It needs two 6-pin power connectors. Not really a con for this card, since all 6870's have this requirement, but keep that in mind if you have an older PSU. Performance in some games is questionable, though I am 99.99% sure this is due to the fact that the drivers are still in their first version for the card, 10.12 should fix a lot of issues.

Overall Review: XFX somehow managed to rig the 10.11 drivers to work with the 6800 series, even though AMD's website tells you to download the 10.10e drivers, that there is no support for the 6800 series in the 10.11 drivers. XFX's drivers are only for Windows Vista/7 32-bit though, so I had to pass. DO NOT use a 4-pin to 6-pin/any-pin to 6-pin cable converter, there is different levels of power/amperage with differently pinned cables, you could possibly damage your card using one of those. Make sure your PSU has two 6-pin cables. You'll probably need a PSU with good amperage on the 12-volt rails for a power hungry GPU like the 6870, I would say at least 45-50 Amps on a SINGLE 12-volt rail. Keep in mind that some games will need a CPU with good speeds per core, i.e Oblivion, Oblivion really only uses 1 core, so if that one core is only 2.5GHZ, you may have some trouble, especially when the game is loaded with mods.

Pros: You can't go wrong with XFX or this card. It is an absolutely solid performer. I can run Deus Ex on max settings 1920x1200 smooth as silk on an (overclocked to 3.6ghz) AMD 955 quad core with 4GB DDR1600. XFX backs their products with a TRANSFERABLE lifetime warranty. Awesome selling point when you go to sell your old XFX card later, and how can you go wrong with a lifetime warranted product from a company that will actually honor that? On top of all that, I got a great $30 rebate coming back, effectively making the card $160 AND 3 GOOD GAMES! AMD was handing out Deus Ex Steam codes before release day! How about some Shogun 2 as well? Not enough? How about XFX throws in Dirt 3 to sweeten it up that much more??!?!?!? Not to mention all the Black Edition goodies XFX throws in. LOTS of stickers & swag, & they even throw in a fairly high grade metal stick-on emblem for those that really wanna let the world know what's in that case.

Cons: None I can find even when searching. The card is a rock solid performer, it looks great cosmetically, the fan is quiet it keeps pretty cool during gaming, the warranty is the best in the industry that I know of, it comes with all types of XFX swag & free games, AND was cheap.... I really cannot find anything to be critical of or pick on.

Overall Review: A note to both AMD & XFX: The free games bundled with this card TOTALLY sealed the deal for me. I was ok with my old XFX card but since I was buying Deus Ex anyway, it only made sense to step up my hardware for the additional $110 - AND score Dirt 3 ($40) & Shogun 2 ($20). It was a no brainer really.... I bought another XFX card 2 years ago that had bundled games as well. If you guys keep this up you will ALWAYS have guys like me knocking on your door when it's time to pick up some new hardware. It's refreshing to see companies not being completely greedy and actually putting something out their for their loyal customers. AMD & XFX have most certainly (time & time again actually) earned my business & trust in the quality and value of their products.

Pros: Great quality cards for reasonable price. I have been impressed with what ATI has been coming out with.

Cons: I live in a the desert and these cards already run a bit hot. Something to consider is your environment.

Pros: This card is great. Runs everything i throw at it with little issue, also note i am running this card at pci express 1.0 cause i have an older board i haven't upgraded it yet but i love this card. I run msi afterburner and this car is full modifiable fan settings clock's speeds etc. This cards fan is quiet in idle state an doesn't get loud unless i want it to.

Cons: No Cons, but this is a higher end car expect it to be long heavy and if u set the fan profile to hi it will be loud.

Overall Review: goin to buy another and X-fire these bad boys!

Pros: Great performance for the price! Runs all my games at the highest settings. Doesn't require a huge PSU to run. Improved my WE from a 7.3 to a 7.8

Cons: Doesn't come with any accessories other than a crossfire bridge and a metal case badge, that's not a huge deal to me so didnt see the need to take an egg away.

Overall Review: I've seen reviews of people complaining about noise which is true the fan is on the louder side but that doesn't bother me at all. I turned the fan to run at %50 all the time and my temperature hover between 50* and 60* at full load so no over heating issues at all despite sone peoples claims.

Pros: Can handle anything I throw at it and then some. Haven't found any games that I couldn't run at max settings, though I haven't tried Crysis yet. Has an HDMI slot which is a plus as well as 2 DVI ports.

Pros: This Black Edition card takes anything. Some people say its extremely long but its the size of a standard ATX motherboard. Stays at fairly low temperatures after playing for about 2 hours of battle field bad company 2 on highest video settings. Plays 3-d games and movies. I would recommend this graphics card to any one who is a gamer or does some thing with video editing.

Pros: Runs great on all of my games and runs cool and quiet.

Overall Review: I don't overclock video but if you are looking for a really good mid range card that can be crossfired later for a reasonable price this is your card.