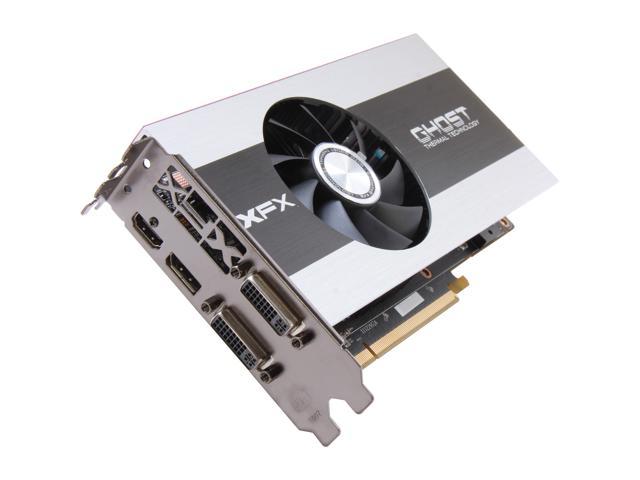 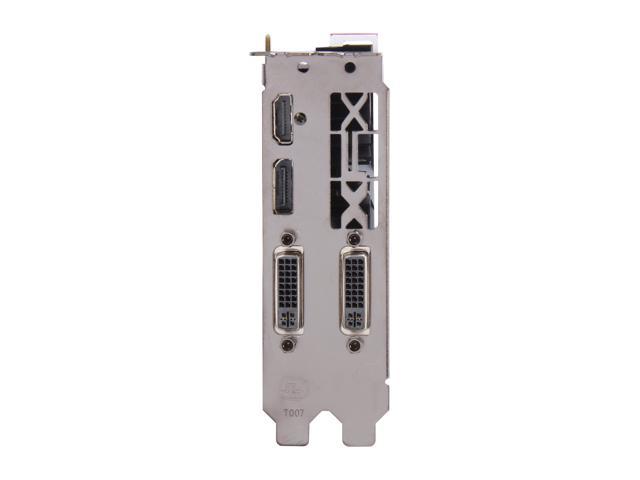 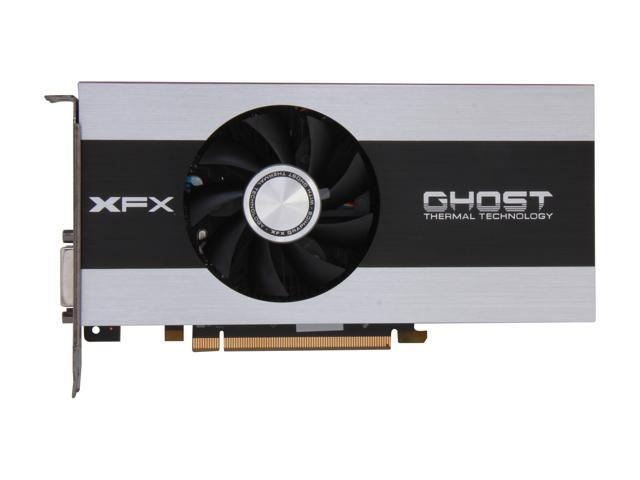 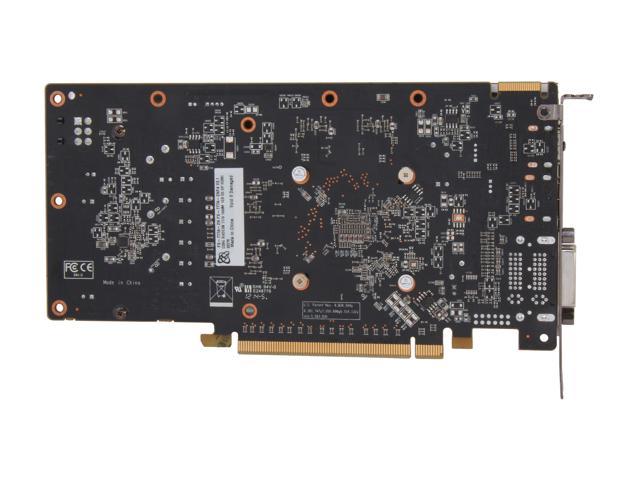 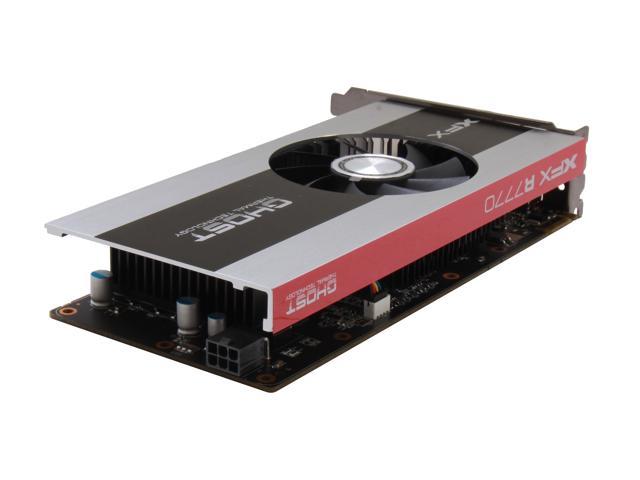 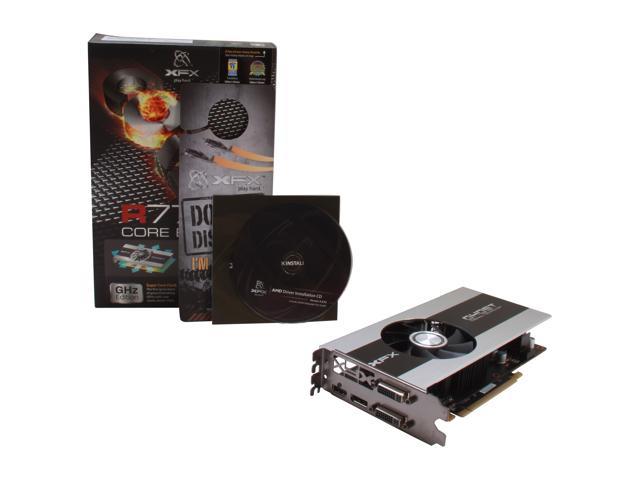 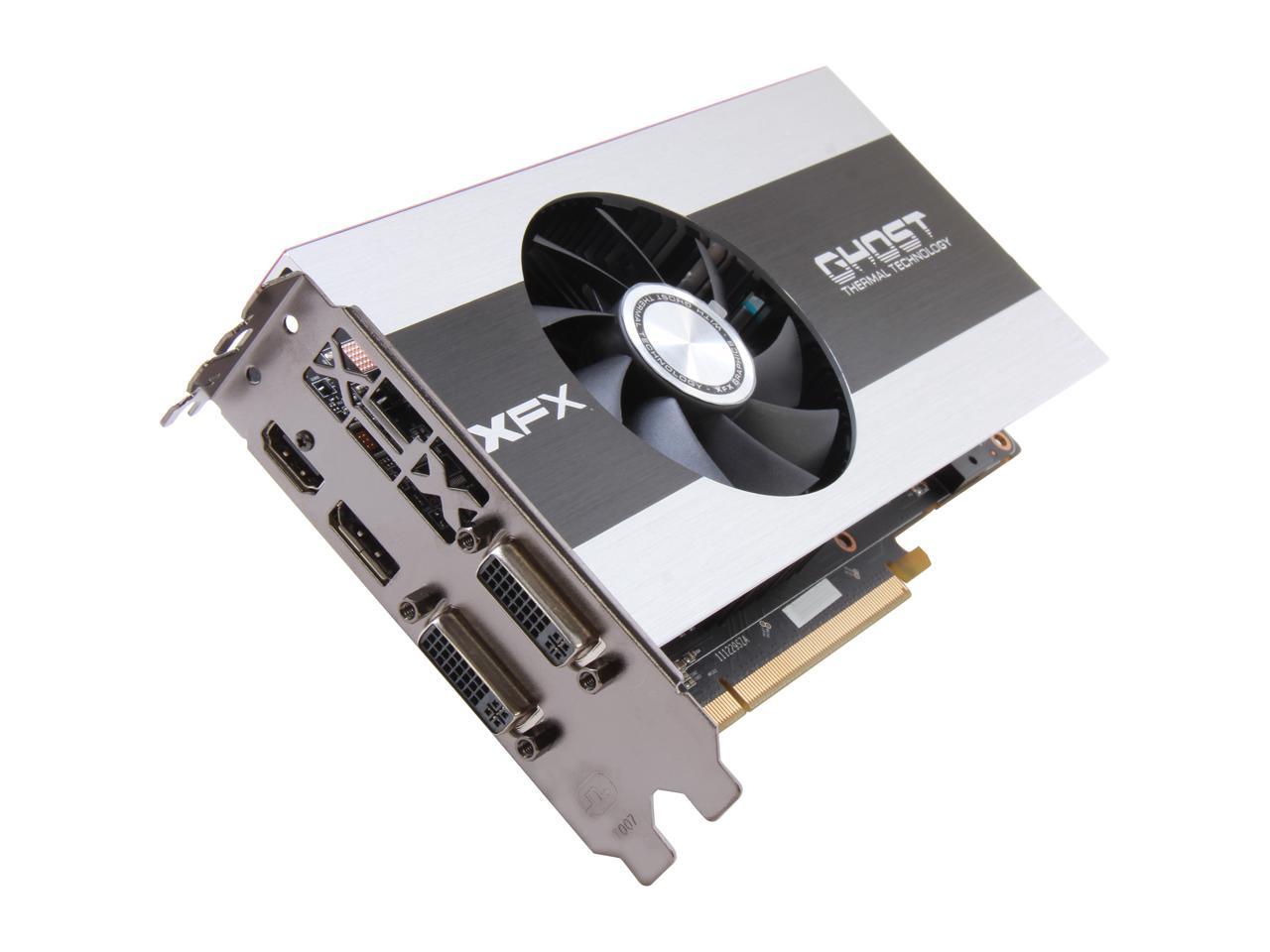 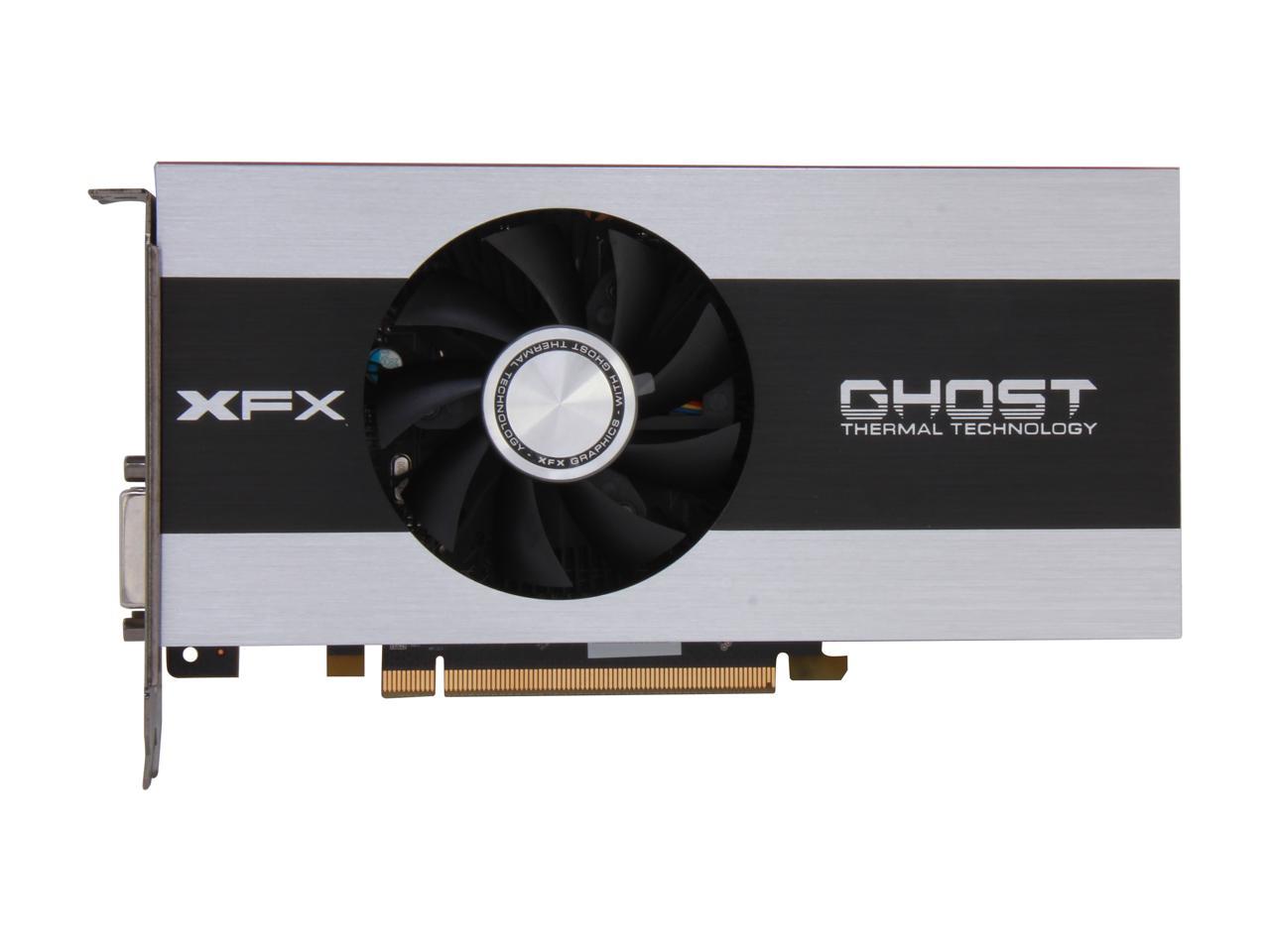 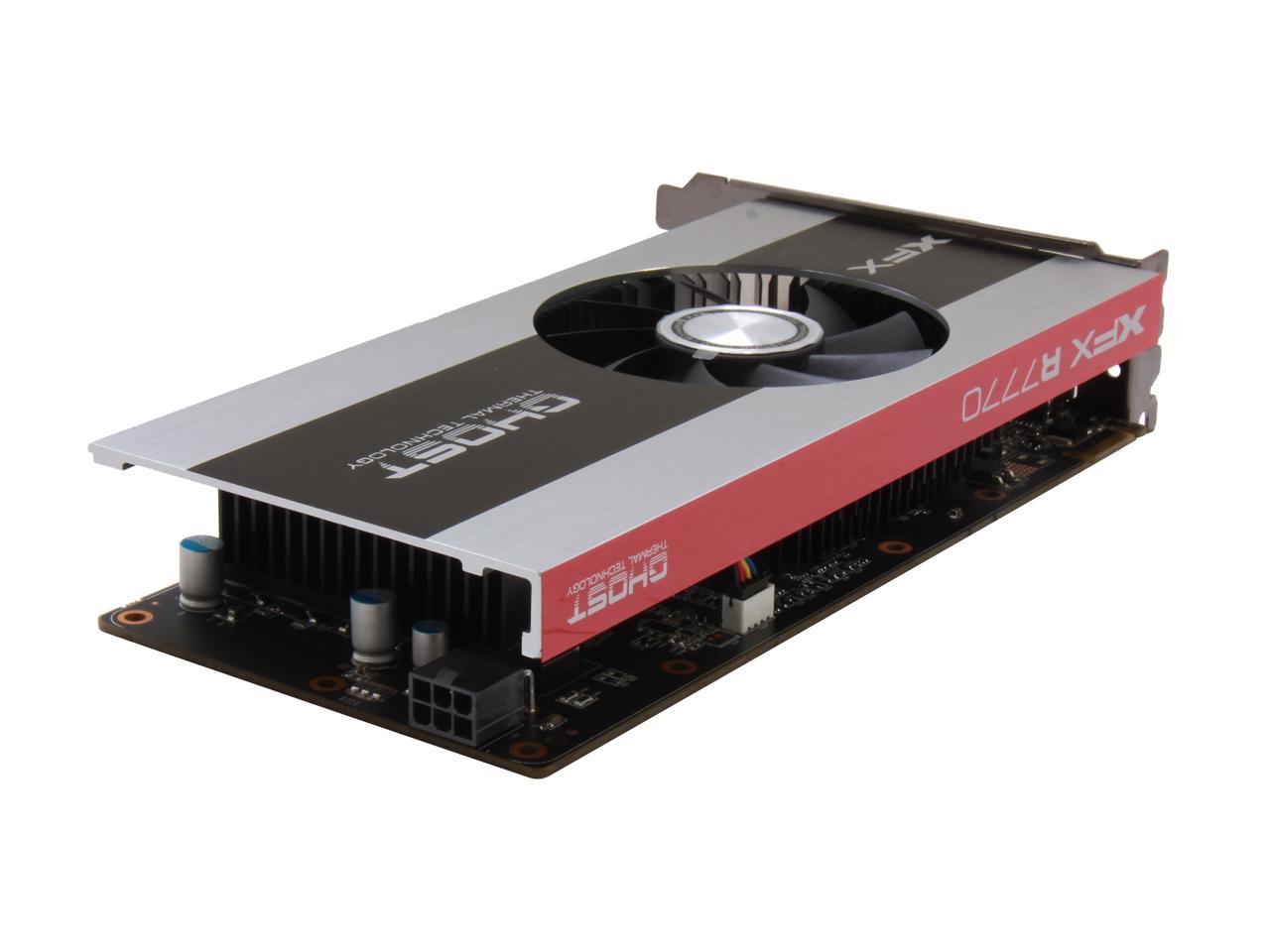 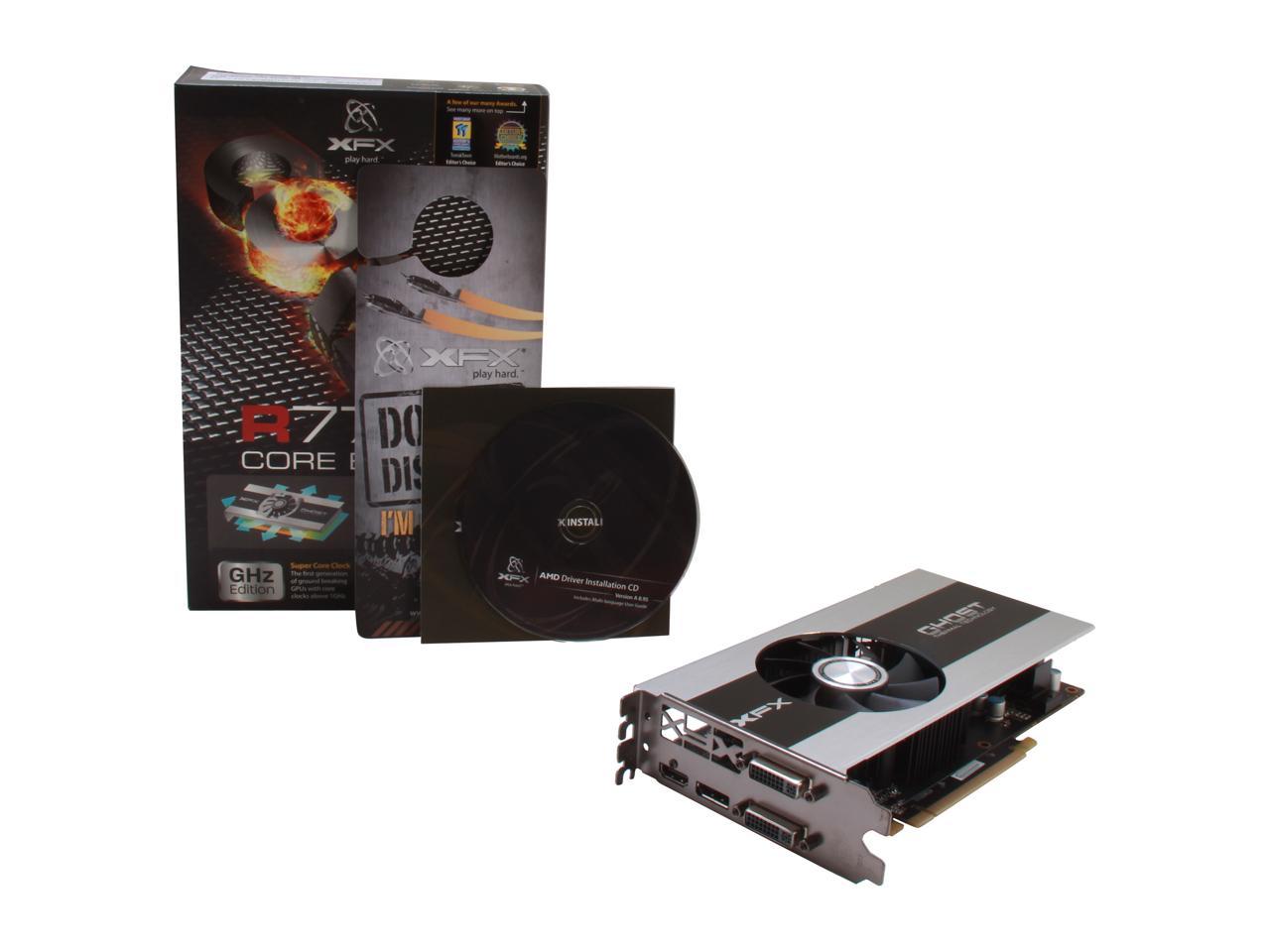 Designed for mainstream gaming, the XFX’s FX-777A-ZNF4 Radeon HD 7770 Core Edition graphics card features XFX’s unique standard GPU core at 1000 MHz which is the benchmark core clock. Ghost thermal technology allows air to pass through the heatsink directly to the PCB and core components for increasing overall graphics card performance. With the HD 7770 graphics card, XFX introduces XFACTOR, a collection of features and technologies that include XFX’s exclusive designs and standards with the highest quality and innovation to ensure that even the most demanding gamers get the best from their graphics cards.

The AMD Radeon HD 7770 GHz Edition is the first graphics card equipped with a reference engine clock that breaks the one gigahertz barrier – making it the world’s first 1GHz GPU. When coupled with AMD’s GCN Architecture and the industry’s very first 28nm GPU design, the AMD Radeon HD 7770 GHz Edition offers incredible, best-in-class entertainment experiences that every gamer deserves. Packed with incredible features, such as PCI Express 3.0, the ultra-efficient AMD ZeroCore Power technology or gaming at resolutions beyond 5760x1080 with AMD Eyefinity technology, these are the world’s most advanced graphics. For everyone.

Learn more about the XFX FX-777A-ZNF4

Pros: Upgraded from a 4850, so the difference was clear. Battlefield 3 - Runs playable at 1080 custom ultra (fxaa on no msaa). At lower resolutions it is smooth as butter, I would go for a little more powerful card if you want 60fps at all times and cant deal with dipping to 30 or 40 in huge battles at 1080p+ (not a deal if you turn settings down, im talking ULTRA with no msaa or 2X) Diablo 3, everything maxed doesnt really push it. Starcraft 2 same deal. Other games that run great on it: Skyrim, FEAR3, Dirt3, Deus Ex, Sonic Generations, Minecraft with shader mods, etc. Power Consumption is actually less than an ancient 4850, so I overclocked it a little with msi afterburner to 1175 gpu, 1200 memory (from 1000, 1125) with no problems. Doesn't really get very hot but I have decent airflow. specs Athlon X4 645 @ 3.875 GHZ 2X4GB Ripjaws 1600 Biostar A870 Antec 450watt psu XFX CORE edition 7770 Antec 300 Illusion case

Cons: Don't notice loads of improvement on some DX9 games from a 4850, which admittedly is probably the same range of card from the 4000's. Not a con with the card, or newegg, but amd drivers kind of lack, especially in the HDMI scaling department, you have to set the overscan to 0% manually for every resolution/timing mode that you use (my monitor is hdmi) Newer games with MSAA on don't perform amazingly, but what would you expect.

Overall Review: First off, my card looks different than the one pictured here. Mainly in the connectors in the back, mine has 2X DVI, 1XHDMI, 1XDisplayport. Also, another reviewer mentioned this card doesn't support crossfire, well that is just plain wrong, both the one I received and the one pictured here do. And from what I hear it scaled incredibly well, so I would grab 2 if on sale. To sum it up, I would go for this card if on sale, if not, I would recommend a gtx550ti or 560se, if only just for the better drivers.

Pros: It's cheap it's cool looking and performs great. Runs BF3 about 40 FPS on ultra with fraps dips in and out but it's awesome.

Pros: After installing this card, my system felt like it was new again. This card replaced my integrated 4250 graphics. Coupled with a FX-8120 and 8GB of ram, this thing flies!

Cons: No crossfire bridge, and no adapters. Only the card came in the box.

Pros: Powerful and cheap card. I play most of my games on maxed out settings, and get 30+fps. Personally I'm fine with 30+, not worried about 60+. Borderlands 2 runs at max (except Physx) and I average 40+fps.

Cons: Occasional screen flickering. Sometimes, for no apparent reason, there will just be a random artifact in the graphics. Doesn't seem to matter what game. It only lasts for about 1 frame, and doesn't happen all that often. But it still happens. I switched over to the beta drivers, and haven't noticed it happening. I could've just gotten used to it though.

Overall Review: Took a little over a month to get my $20 rebate. It runs Crysis 2 with the DX11 pack at 30+fps on high settings. It will sometimes drop below 30fps, but not often. Overall, this isn't really a card to max out everything and get 60+fps. Medium settings might get the 60+fps though. Running all games at 1920x1080.

Pros: + It's not too expensive. + I have it in a PCIe2.0 slot and it plays some games at pretty high graphic levels with suitable fps @ 720p resolution. (WoW, sc2, tomb raider, sim city, LoL, skryim) + Temperature stays low to warm but never hot. + CrossFireX ready if you ever want to upgrade your system that way.

Cons: Really, I can't think of anything worth mentioning as a con. It is exactly what should be expected from its stats.

Overall Review: * My screen is only 720p, so I don't know how well it'll do at higher resolutions, but I wouldn't expect too much past medium graphics above 720p. * I kinda like the faceplate thing. * It's not too long of a card. It's a full inch from the edge of my motherboard. (* 7.5 WEI graphics index)

Manufacturer Response:
Thank you for the great review. We are happy you are pleased. If you have any questions, please contact us at neweggsupport@xfxforce.com. Play Hard!
Evan R.
Ownership: 1 month to 1 year
Verified Owner
XFX is great10/31/2013 6:11:56 AM

Pros: This card is amazing, I can handle FF:XIV, and WoW at ultra settings running at the same time with 30 fps. Great card fro the price and I got Far Cry 3 for free.

Cons: Only con I have for it is it is a loud card. Every now and then you do hear it roar, but it is hard to get it do that.

Pros: Nice, clean look. Stays cool. Plays most my games at max settings without ever dropping below 30 FPS. Games I play at max: WoW, Battlefield 3, Black Ops 2, Sleeping Dogs, Crysis 3 (Not max settings, but high). Just purchased another one for Crossfire!

Overall Review: The card is pretty big, so if you have a stock case by HP, Dell, Gateway, etc.. it might not have enough "breathing room" so to speak. I thought it wouldn't fit into my stock HP tower, but it did. If anyone is going to buy this GPU then buy a good sized case as well...