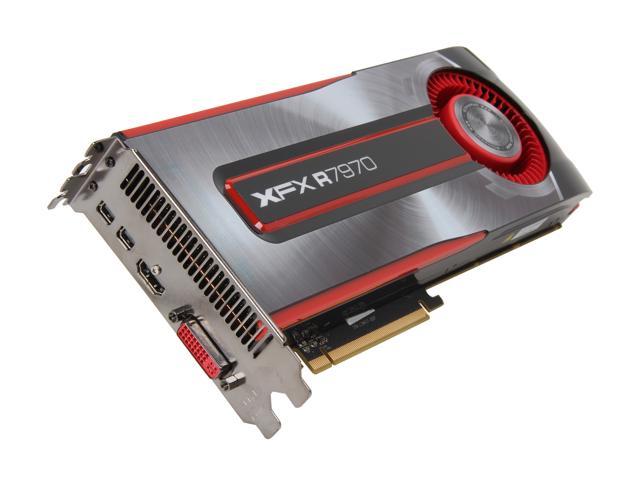 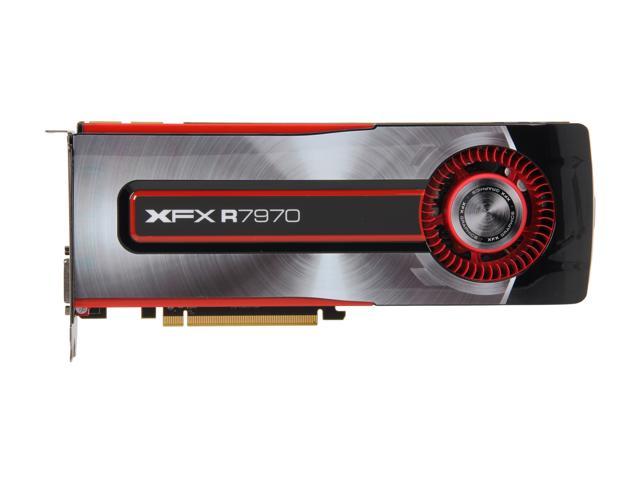 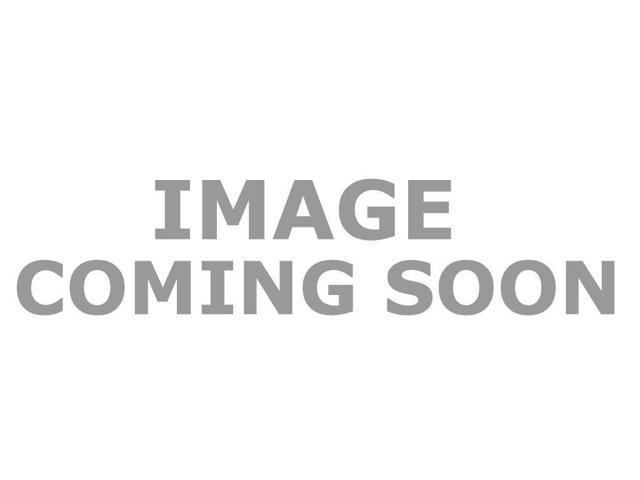 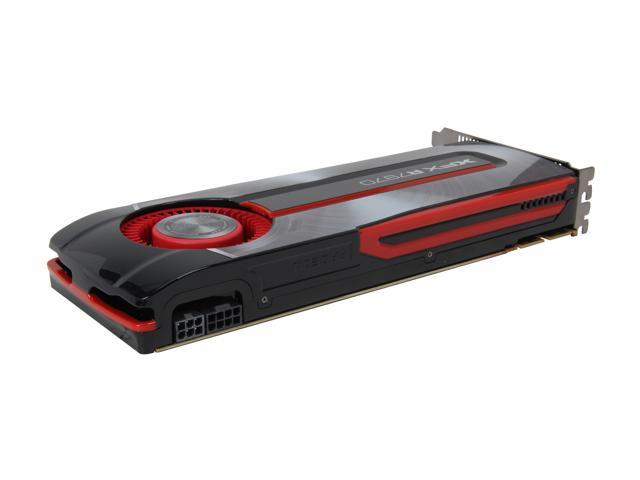 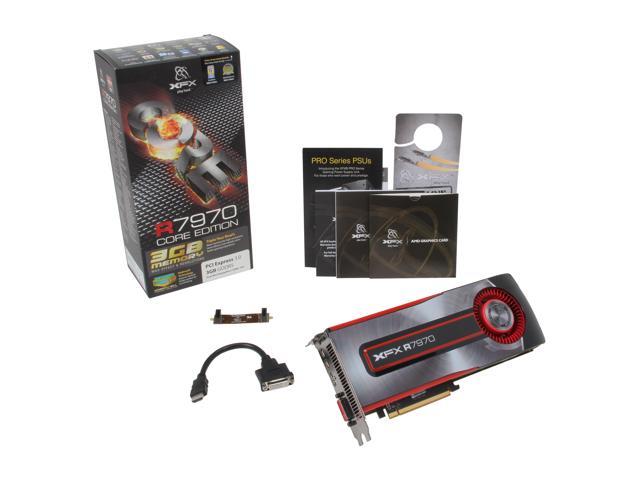 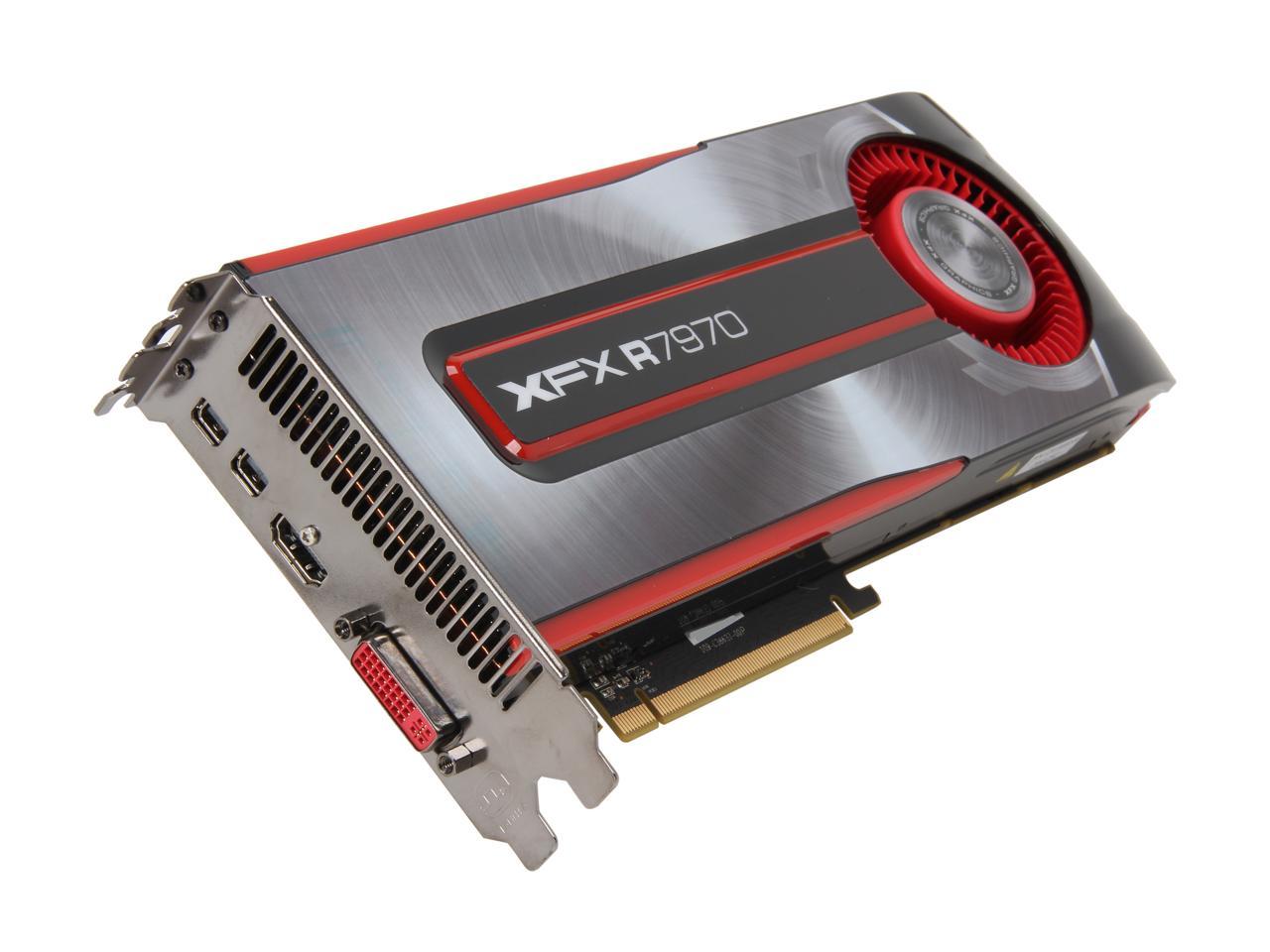 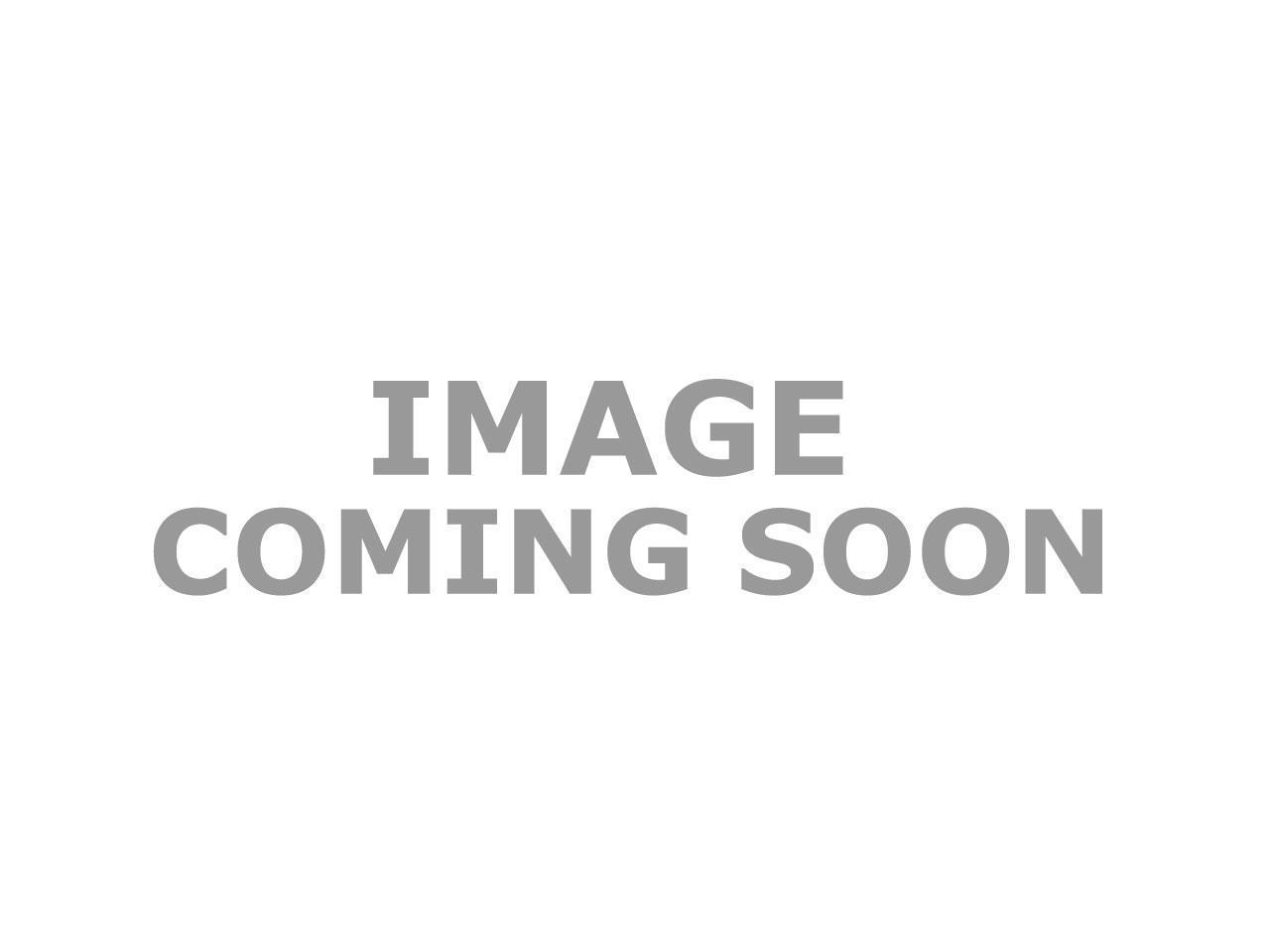 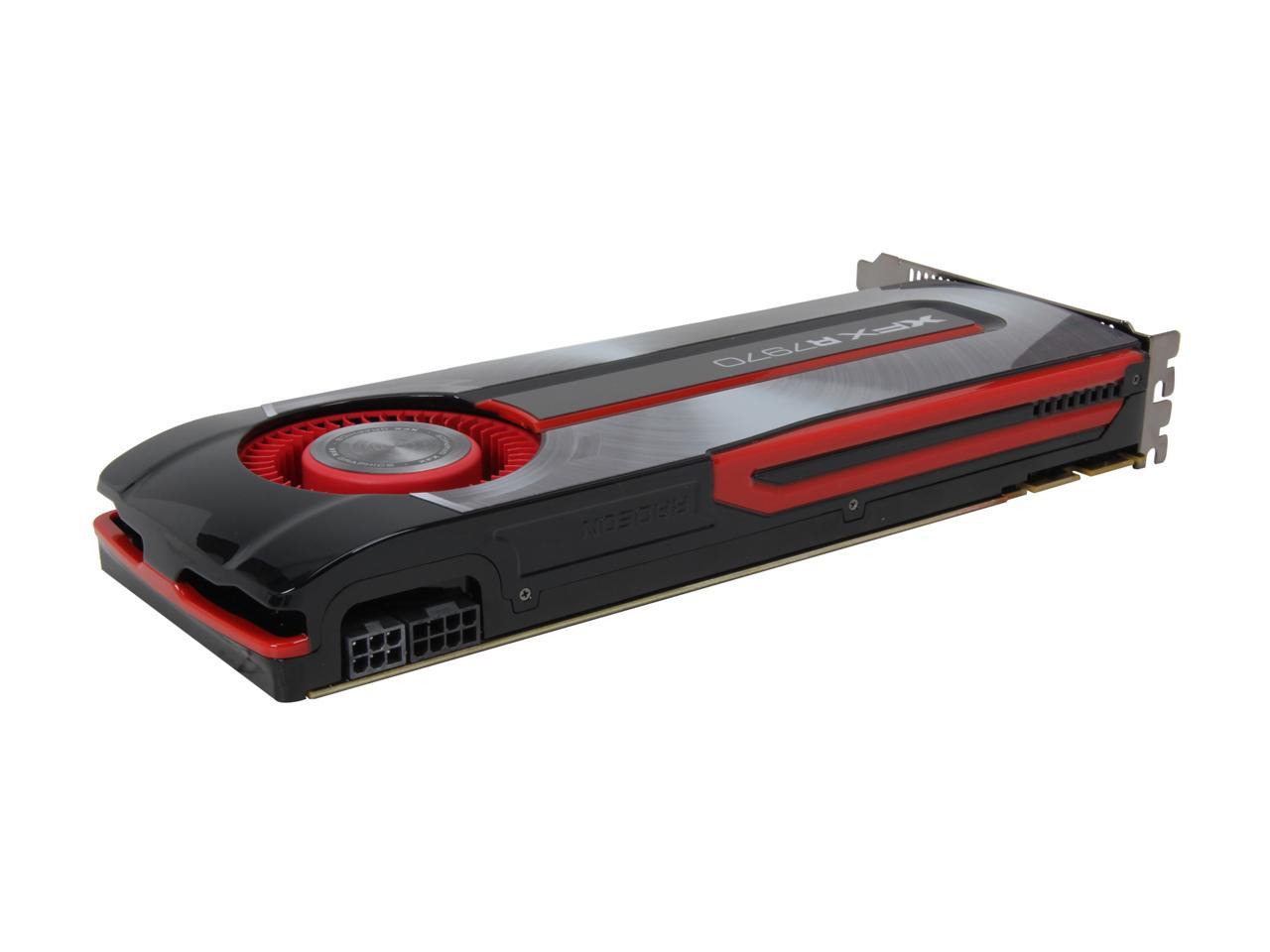 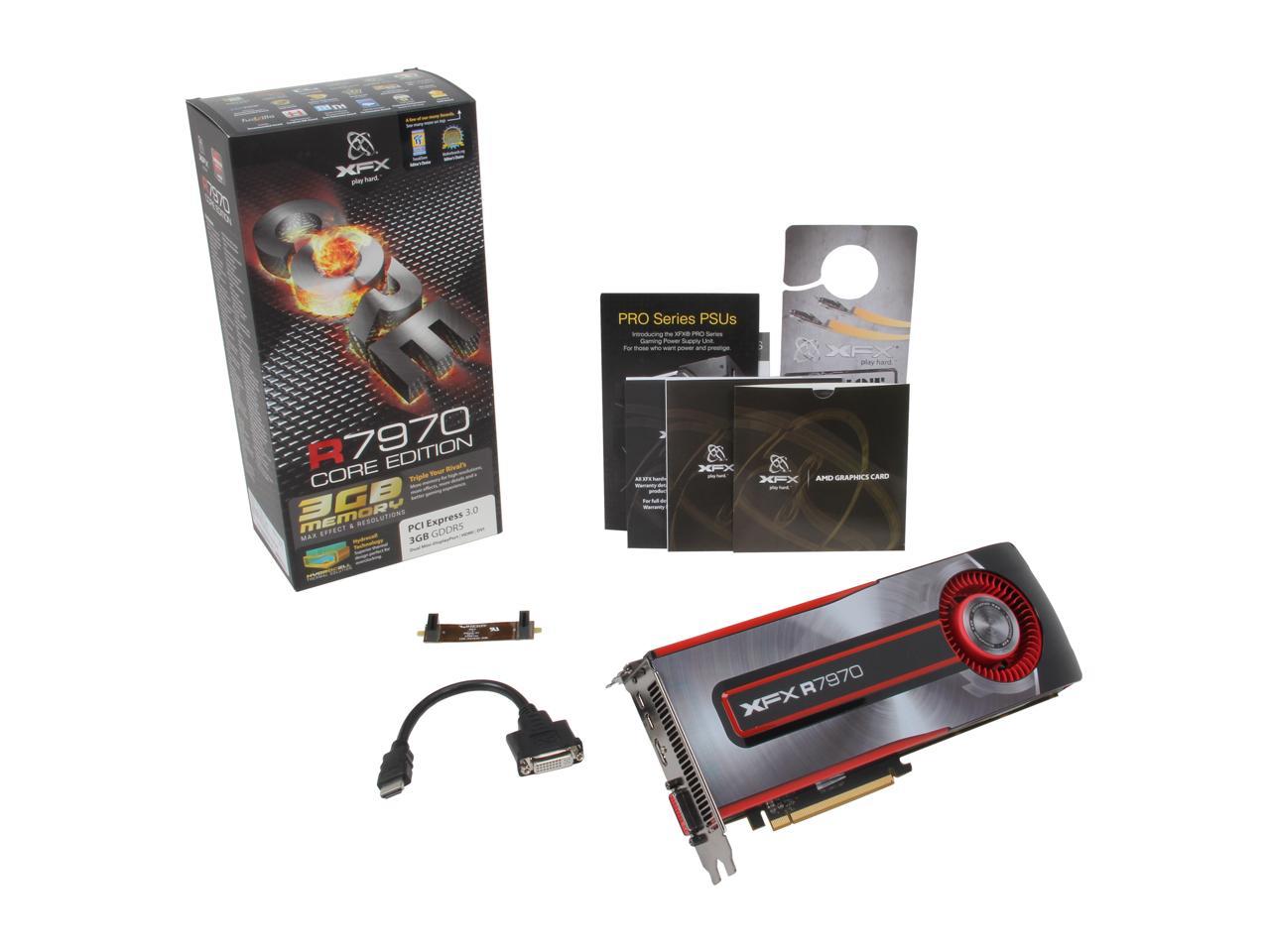 With the HD 7970 925MHZ 3GB GDDR5 with Ghost and Hydrocell graphics card (FX-797A-TNFC), XFX introduces XFACTOR, a collection of features and technologies that include XFX’s exclusive designs and standards with the highest quality and innovation to ensure that even the most demanding gamers get the best from their graphics cards.

Learn more about the XFX FX-797A-TNFC

Pros: Just upgraded from a single 6970 to a single 7970 and the performance increase is insane. Instead of generic "I can max out all games easily" I can now play BF3 on ultra settings at 1900x1200 resolution without dropping below 43fps. Before this purchase I was sitting at 40ish fps on just high settings. One of the most notable difference is playing Metro 2033 which I played on the highest settings and chugged away dropping into the 20's on my 6970 but that no longer happens. Its incredibly smooth/makes me giddy playing beautiful games without a hitch. Overall this card brings a slew of new tech, incredibly fast frame rates, and is sexy to boot.

Cons: Having to deal with some corruption issues. I have not been able to diagnose their source (at first I thought it was a loose cable) but the nature of them denote a more problematic nature. Blue, red, and green pixels all over the screen including lines that flash randomly has happened a few times after booting up. I have fixed these issues since by reinstalling drivers after a clean driver uninstall. So far the issue seems resolved but it could be a heat issue that i will be keeping an eye on. Bare in mind i have not overclocked this card. Some past reviewers raise concerns about high temps up to 80 degrees celsius. These cards are capable of handling those temps without a problem which is why AMD has set the fan control to ramp up fan rpms when it reaches that temp. I have not seen it rise above 81 degrees. Last con is obviously the cost. Yet the best single GPU cards for generations have sat at this price point. If you want the best, expect the high cost.

Overall Review: Due to the graphic corruption i dropped one egg. Yet overall, since the problem seems to have been corrected by reinstalling the newest AMD 7900 drivers after a clean sweep of the old ones. This card is absolutely tearing apart every game i throw at it and i'm running relatively old hardware. Core i7 950 @ stock clocks 12gb Corsair Dominator DDR3 AMD XFX Radeon 7970 300gb Velociraptor 1000w Corsair PSU I recommend you pick one up if you can afford the cost.

Pros: Profound improvement over my aging 5850. At 1920x1080 I am finally back to setting all of my games to the highest settings with AA. Out of the box with stock voltages it overclocked to 1100 core and 1575 memory stable. With my custom fan settings in afterburner I never exceeded 74 degrees C in furmark with 54% fan speed. 8+6 pin slots on the side made for easy access unlike my old 5850. So far I am just happy overall that I bought the card because of its performance, overclocking headroom, and power consumption.

Cons: I haven't run into any so far.

Overall Review: If you have an aging 550-650 watt power supply you might want to be aware that it might need an upgrade. I had to replace my old Enermax 650 that was 4-5 years old because it would shut down my computer during gaming with this card. I replaced it with a new Corsair 700 and have been happily gaming ever since. Just food for thought.

Manufacturer Response:
We are glad to hear that you are liking the new technology. Enjoy.

Cons: I payed full price, 560 dollars - hoped to setup Eyefinity but XFX figured they would rather save 10 dollars towards profit than throw in the proper connectors. This is light on the connectors - Real shame! (that is why only 4 stars) Now i can spend some time researching what kind of adapter i need for eyefinity (so far looks like an active mini dp to dvi or hdmi). How about a free game with it?

Overall Review: I would recommend getting another brand that has more cables, vote with your dollars. My vote was for AMD instead of NVIDIA even though NVIDIA makes great cards

Pros: Awesome graphics and easy overclock with ATI overdrive. GPU clock settings are stable at 1125 MHZ and the memory clock is at 1525 MHZ. If you do overclock with overdrive make sure you kick up the voltage all the way to the right at +20. These speeds are faster than the black edition stock settings. Did I mention I love this card.

Cons: Just a bit louder than my 5870 card when turned up to 90% fan speeds, but with my headset on and gaming I don't even notice.

Overall Review: I am a XFX customer for life. So far I have bought 3 XFX cards and they have all been reliable and stable when overclocking. GET THIS CARD, you won't be disappointed.

Pros: awesome..going from a pair of gtx280s this a huge upgrade prob close to double the power i had before

Cons: at 100 percent the fan is freaking loud its like a delta fan..but really this is not a con because u dont need the fan set more than 50 to 60 percent...the 100% must be for people who just want to benchmark the card.i am very very impressed with the airflow of this card it really pumps alot of air out the back of the case and im very glad i didnt get the version that keeps the air inside the case.

Cons: Mine is the 1112 mv version and for some reason it does not overclock as nicely as some others have said. (unstable at 1125 mhz) I can raise the Vcore if i want but I dont see a need for the extra heat. (currently running at black edition specs 1000mhz 1425 mhz ram)

Overall Review: If you have a core 2 series, even core 2 quad this gpu will be severely bottle necked on bf3, no matter what the reviews say comparing processors on bf3, it is much different online and I only see around 50-60% gpu usage. (Buying i5 2500k very soon) I even tried my q6600 at 3.6ghz which showed no benefit.

Pros: Works as I expected after reading reviews from Guru3D, OC3D, HardOCP and other big name sites. practically nearly doubled up my performance from my reference ASUS 6950 unlocked without doubling the power consumption. AMD aren't known for the best drivers around, but for the games I mostly play; BF3, Skyrim, and etc, I haven't had any troubles so far.

Cons: Waterblocks aren't out yet but should be coming soon, gonna slap an EK on it ASAP.

Pros: The card is an impressive piece of hardware. It edges out my older 5970 which was a dual GPU card, and it does so with less heat and better tesselation performance.

Cons: This was my first XFX purchase, and it will likely be my last. I had for so long heard about the lauded double lifetime warranty XFX provides, and was interested in having that security for the first time. So I gladly paid the extra $10 and put up with the lack of provided connectors comforted by the fact that at least I'd have an unsurpassed warranty to keep my equipment safe. Little did I know that XFX oh so quietly pulled their old warranty policy in favor of a more standard 2 year warranty. So what did I pay extra for? $10 more for the privilege of having the same warranty as all the other cards, and also to have less video adapters included? Absolutely ridiculous. Sapphire never did anything to lose my business, and evidently XFX isn't doing what I thought they were doing to EARN my business. Back to Sapphire I go next time. Buy another brand if you want to send XFX the message that we expect more from them. We want to pay more and get more; not pay more and get less.

Overall Review: I am also 90% sure that when I actually placed my order, newegg had listed the card as a Lifetime Warranty, and then later updated the listing to 2-year warranty the next day (I bought it on 1/8/12). If that's true then newegg deserves some of that blame too. I'd have simply ordered the Sapphire card if I knew the price was higher for less value.