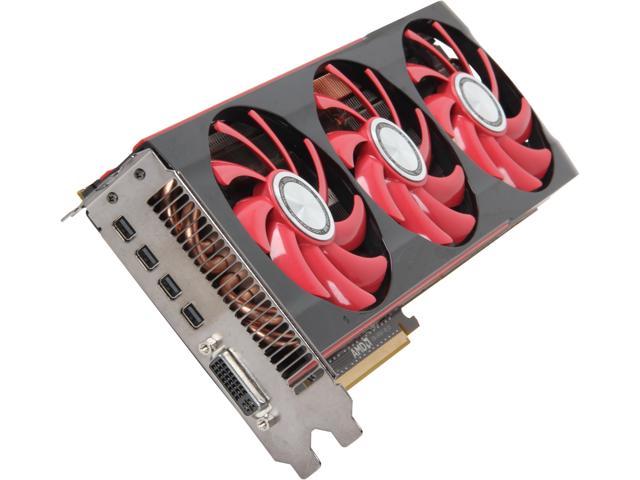 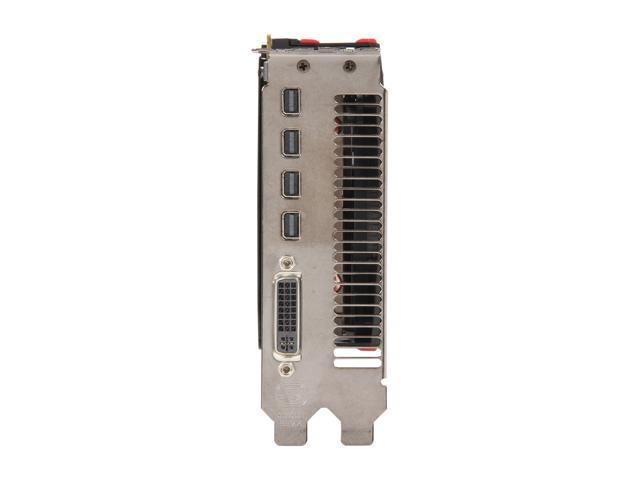 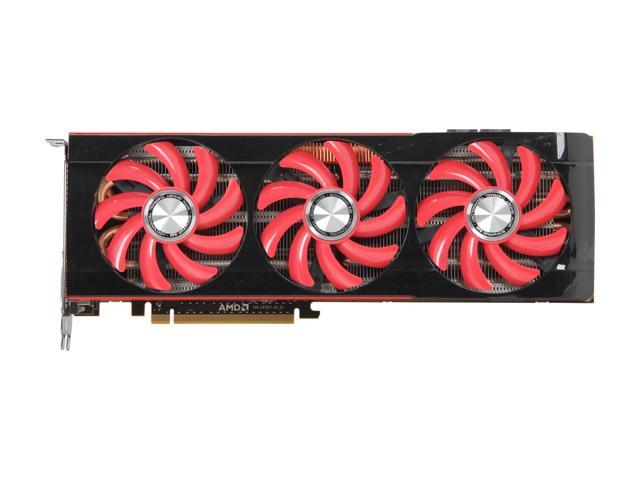 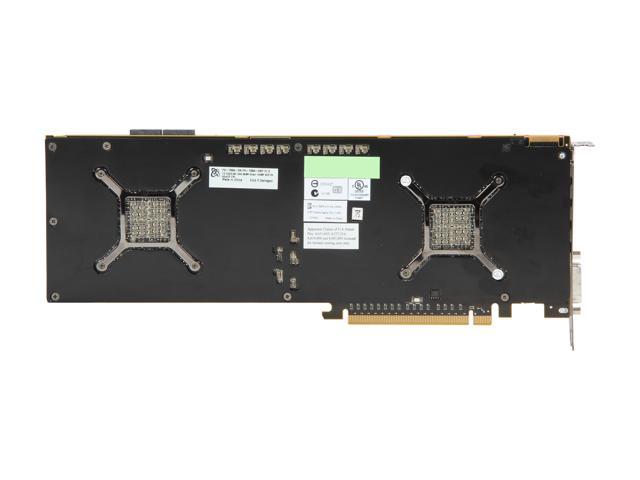 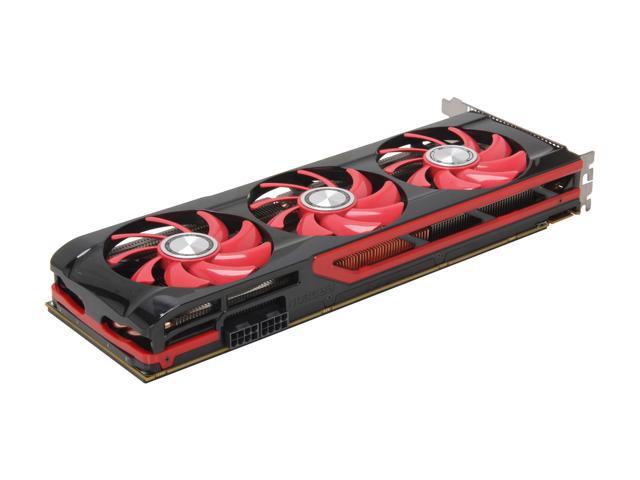 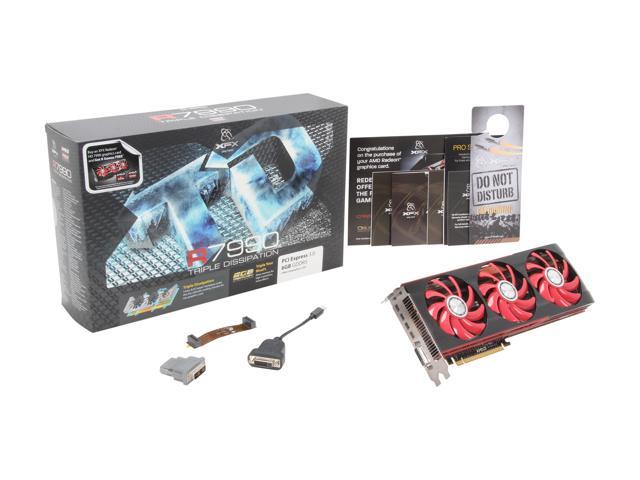 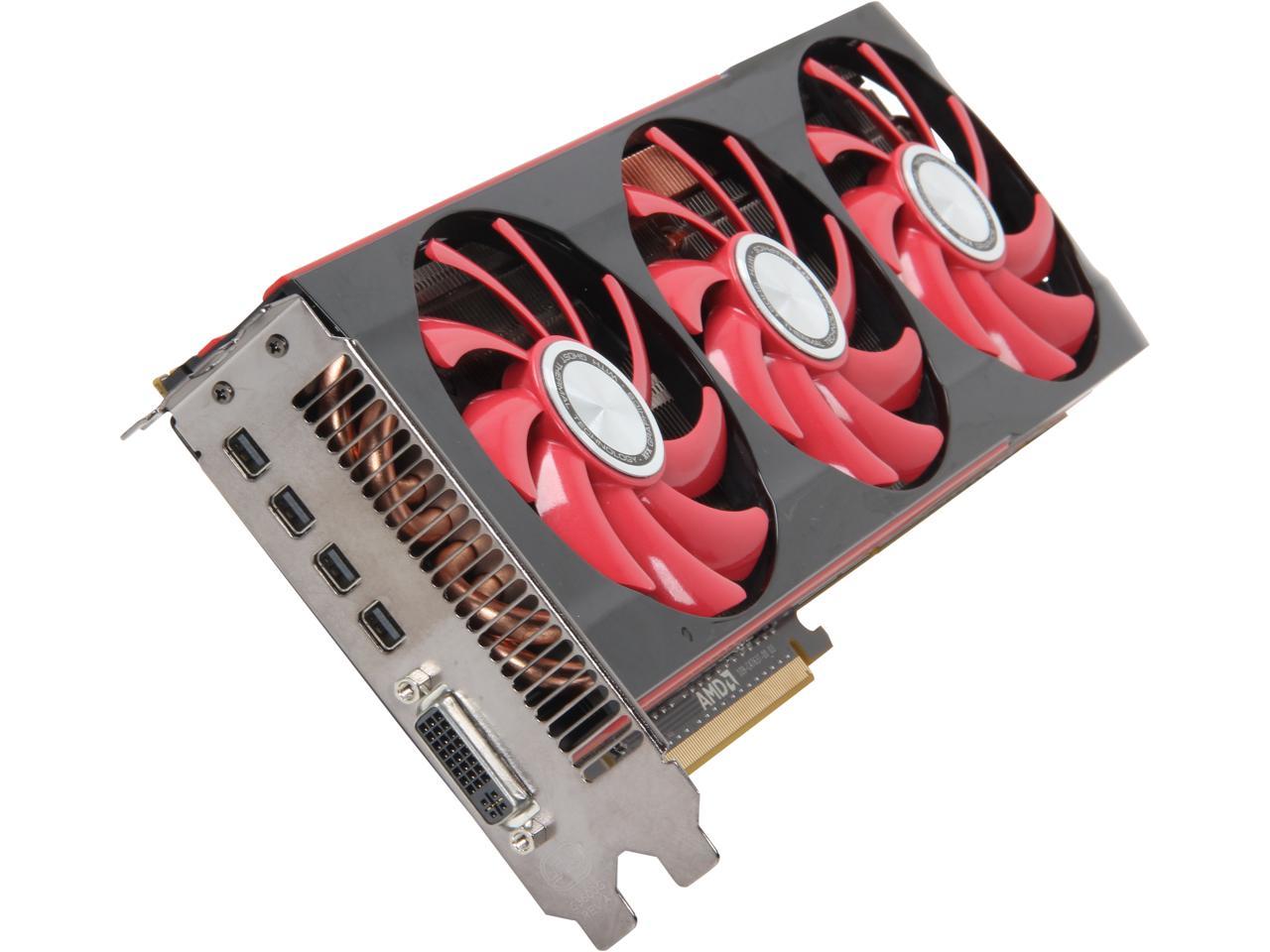 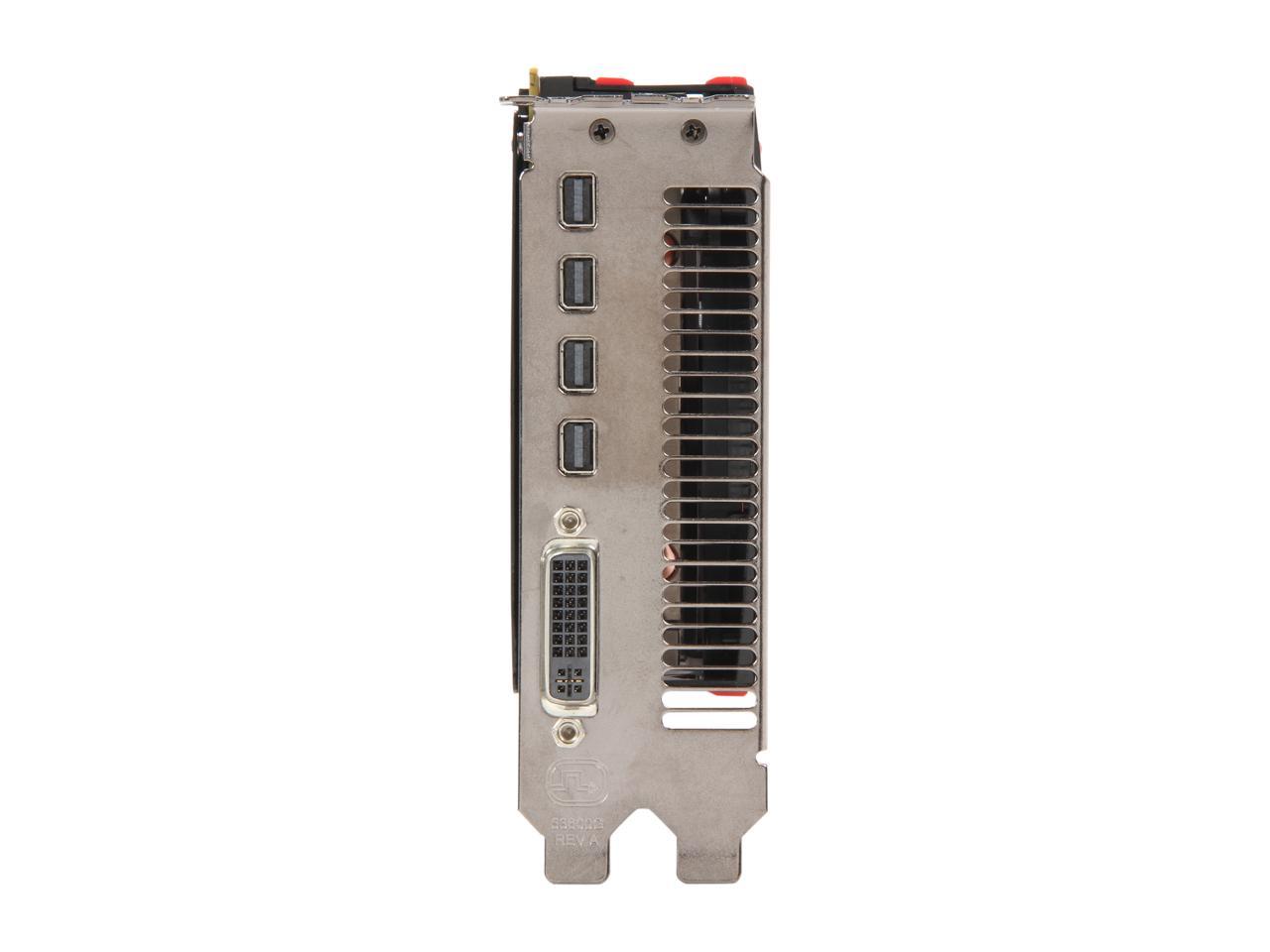 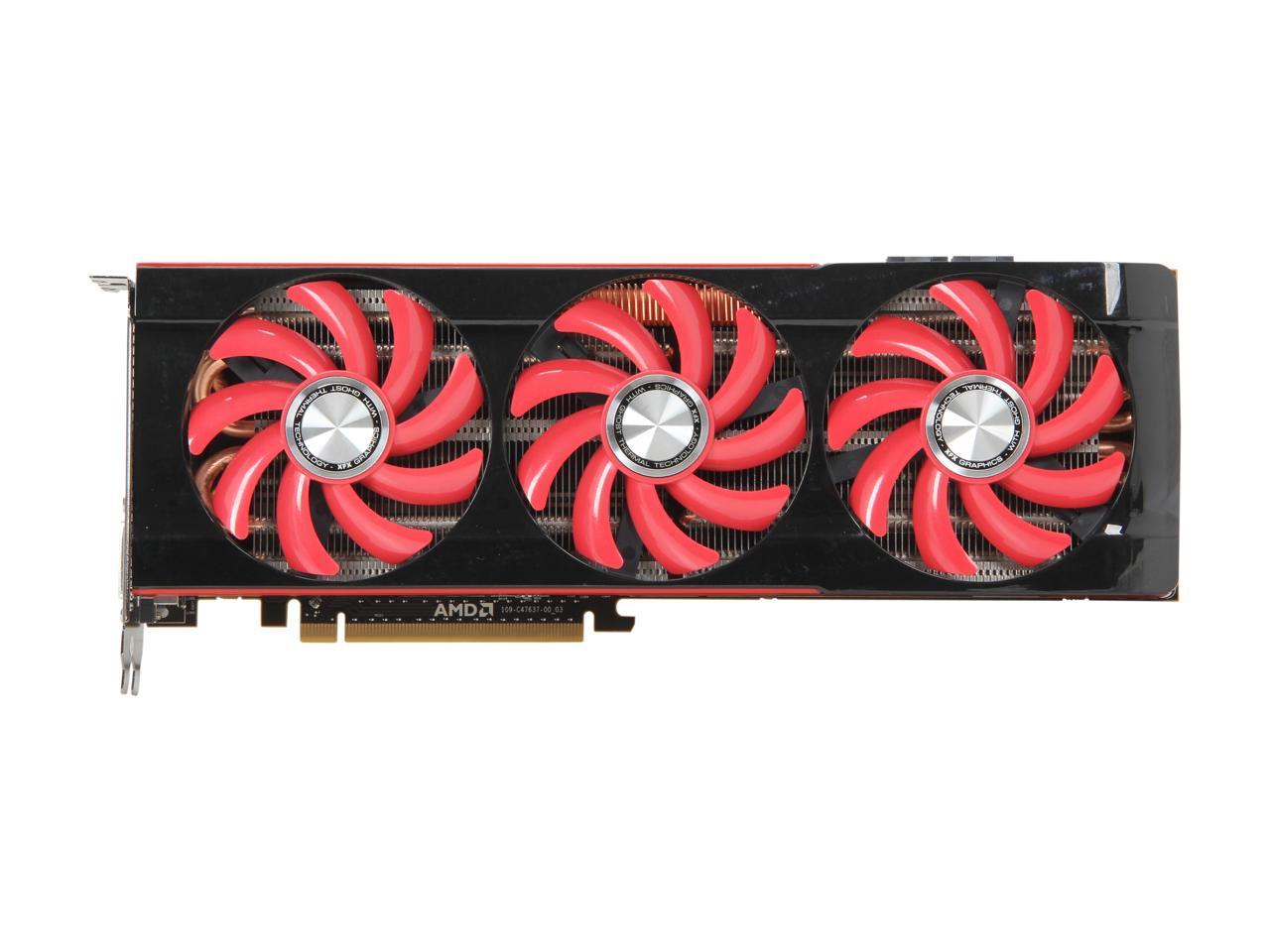 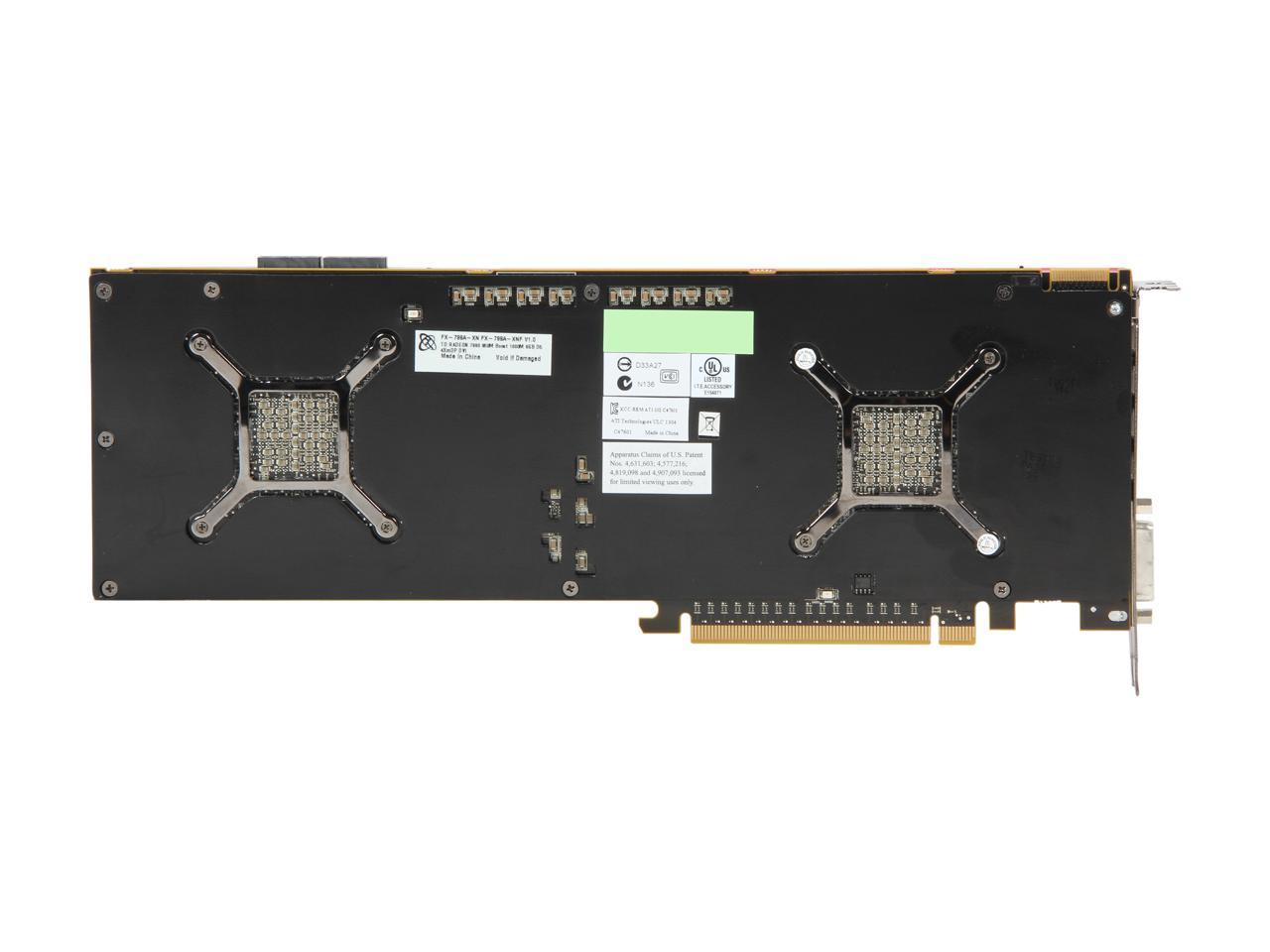 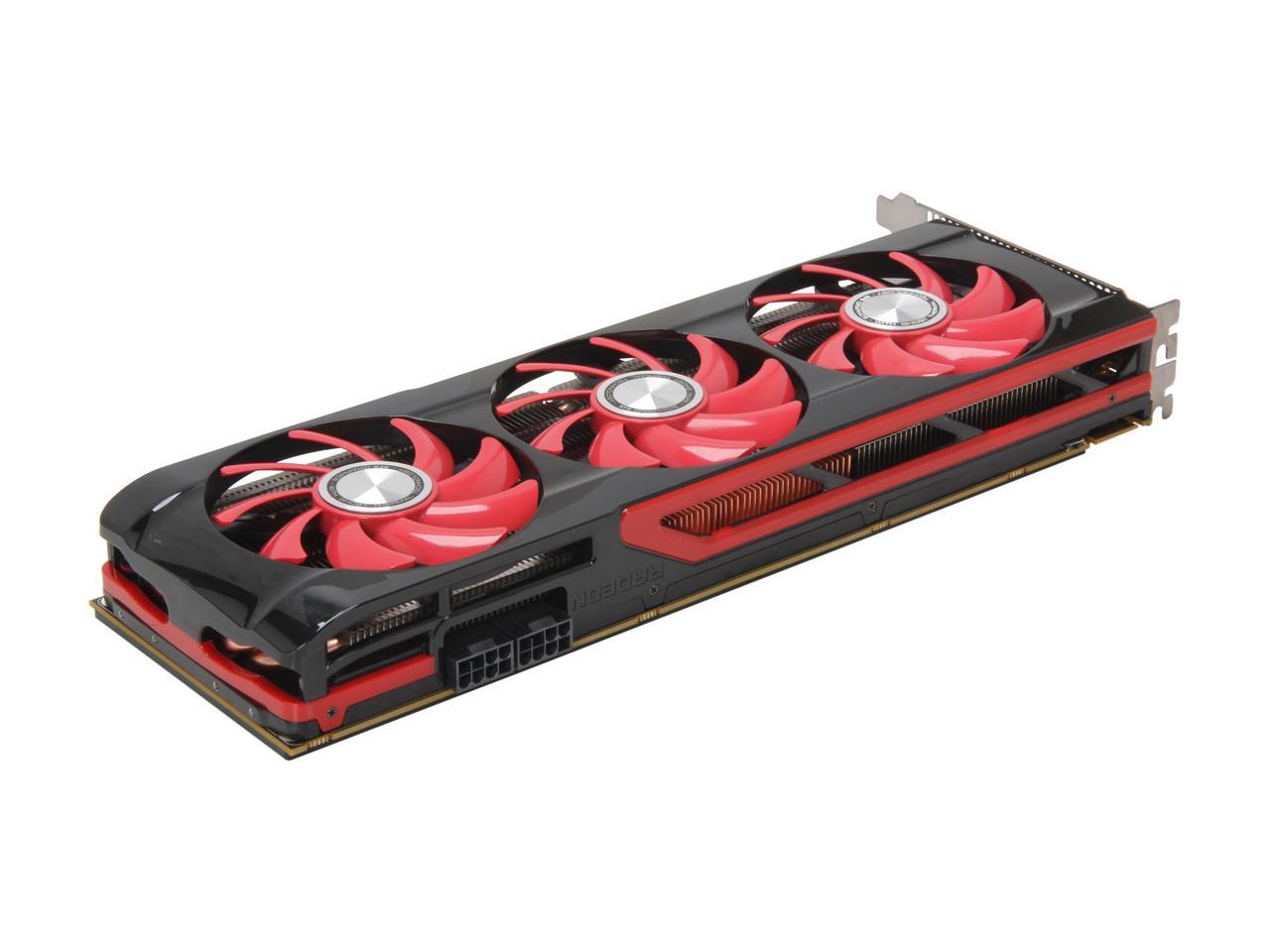 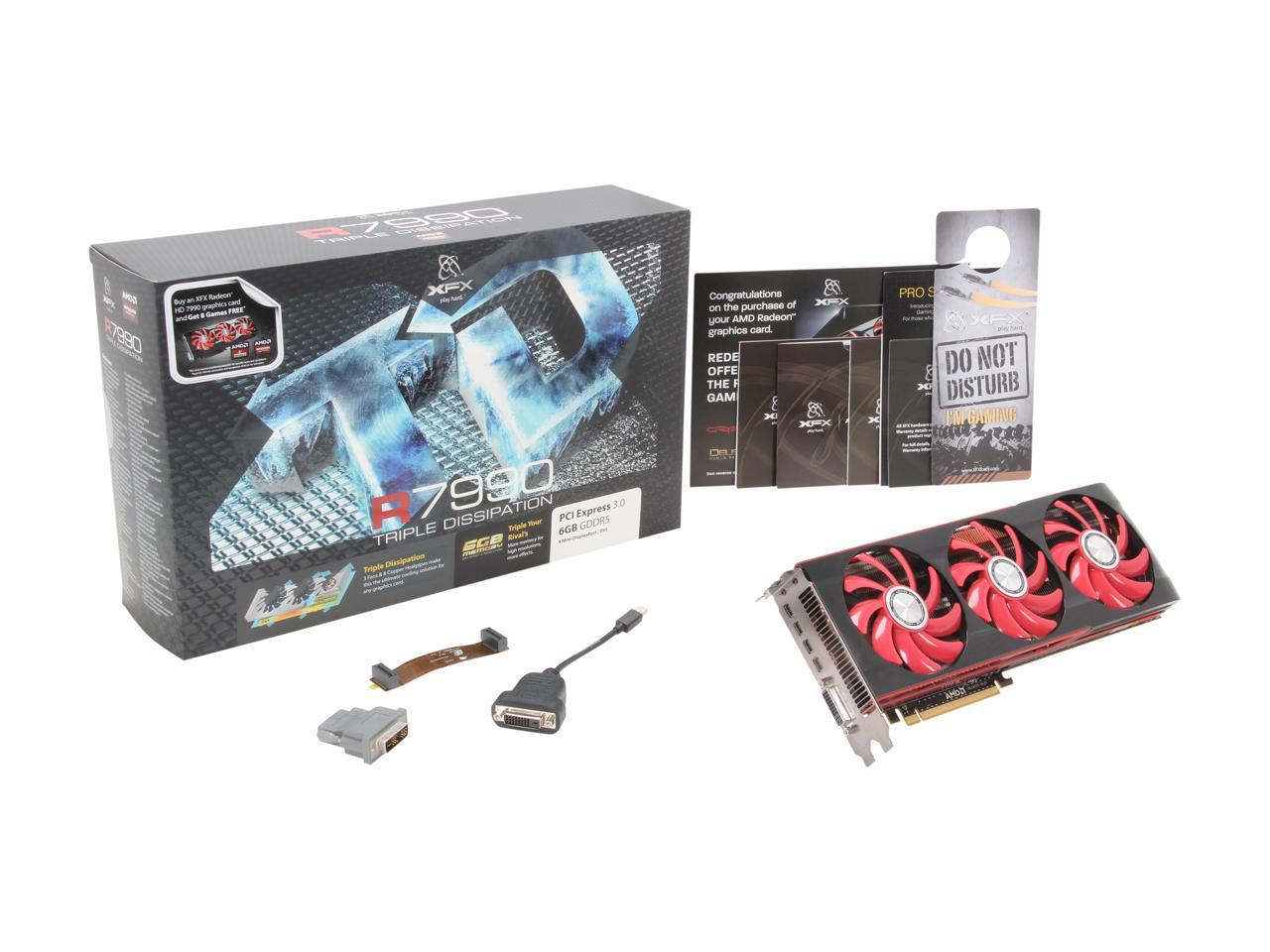 The XFX AMD Radeon HD 7990 graphics card packs two 28nm Tahiti GPUs running at a base clock speed of 950MHz with a boost speed of 1,000MHz. It offers incredible, best-in-class entertainment experiences that every gamer deserves. Ready for DirectX 11 and PCI Express 3.0, the XFX Radeon HD 7990 also comes with 6GB of GDDR5 graphics memory (3GB per GPU), and can support up to five simultaneous monitors with AMD's Eyefinity technology. The enthusiasts gaming board exists to play games, and the XFX Radeon HD 7990 comes bundled with eight free ones!

Learn more about the XFX FX-799A-XNF9

Pros: The new drivers on this really save the card. fixed alot of micro stutter. there really isnt anything this wont run, even maxes crysis 3

Cons: had to take out a harddrive bay to make it fit, not really a big deal.

Overall Review: for the price, this is amazing. always wanted to get a dual card and never could, but i finally got one :)

Cons: None for the card itself

Pros: Recently replaced my Sapphire Radeon HD6990 with this card. Didn't expect to see much difference in performance, boy was I wrong. Running BF3 on 3x 24" LG monitors with the game settings maxed out. My monitors almost can't handle what this card can dish out. The clarity is unreal. Noise isn't and issue either. Only under heavy and extended demands do I hear the fans rev up. I'm very pleased with this card. I would highly recommend it if it's within your financial range.

Cons: My only complaint is that it's dropped $100 since my purchase, that's electronics for ya.

Cons: What happened to support? A couple of weeks after ownership, problems started to develop with this card. First thing I noticed was one color must have went out - everything turned blue. Then frame rates dropped to 10% on first core. Now, the card dies completely under load. It's a shame really. Now the nightmare has begun...I filled out a support form - promising contact within 1-2 days... NOTHING. I tried calling their support number and no matter what time you call, the call goes to a voice mail saying "We'll be back in 1 hours". Yeah right.

Overall Review: Has XFX gone bankrupt? Play hard = pay hard? I'm not sure what is going on with their support, but I may have to avoid XFX in the future.

Manufacturer Response:
Hello, We're sorry you are having trouble with your card. Our website does indicate we will be contacting you within 24-48 hours, but as XFX is an American company, we also take American Holidays. New Years Eve and New Years Day are no exception. If you are still having issues, we are open today, Thursday, Janruary 2nd. Please call again and we would be happy to help you neweggsupport@xfxforce.com
Timothy J.
Ownership: less than 1 day
Verified Owner
Please don't leave one egg reviews as responses :P5/30/2013 7:43:43 AM

Cons: Large and heavy (As you knew buying it), drivers need work, slight stuttering still visible in some games due to crossfire drivers, could use a little prettying up.

Overall Review: If you're going to respond to someone in a review, please don't leave a 1 egg review :P It lowers the overall rating of an item, not cool considering people look at the rating before buying.

Pros: Cant find anything more powerful currently. Great for gaming at high resolutions. Keep in mind this card is BIG so double check to ensure you system has enough room to house it.

Cons: Must mention again is size, as this is far bigger than most video graphics cards, but then again it is literally double the card compared to anything else.

Pros: Nothing good to say about this card.

Cons: Runs hot. Temps on cores under load go over 90. VRM temps 120. I bought two. They both burned out in less than 2 weeks.

Pros: 1) Consumes more power than the other high end Nvidia cards 2) Runs pretty hot, fans stay pretty low so I made some custom settings with MSI Afterburner (no OC, stock setting). Idle without custom is 40-42C, under load I have seen it go up to 80C playing Blood Dragon. 3) Pricey with only a 2 year warranty 4) Have to dock and egg not for the performance, but the packaging. (see below)

Cons: 1) Consumes more power than the other high end Nvidia cards 2) Runs pretty hot, fans stay pretty low so I made some custom settings with MSI Afterburner (no OC, stock setting). Idle without custom is 40-42C, under load I have seen it go up to 80C playing Blood Dragon. 3) Pricey with only a 2 year warranty 4) Have to dock and egg not for the performance, but the packaging. (see below)

Overall Review: 1) Owned 3 XFX cards, have not had any issues thus far. Just like some other reviewers from the other brands my anti-static bag came unsealed. Crossfire bridge was in an unsealed bubble wrap pack. The quality assurance guys don’t need to rush on a $1k card! 2) Also minor cosmetic damage(minor scratches) on the gloss black cooling unit 3) With how hot this thing can get without adjusting the fan yourself, I wonder how long it will last under intense gaming. Quite a few people say that 80-90C is okay, but just because it can go up that high does not mean that you should keep it under that much stress. You never want to run anything under max stress. 4) Last but not least, lucky to get one of these.