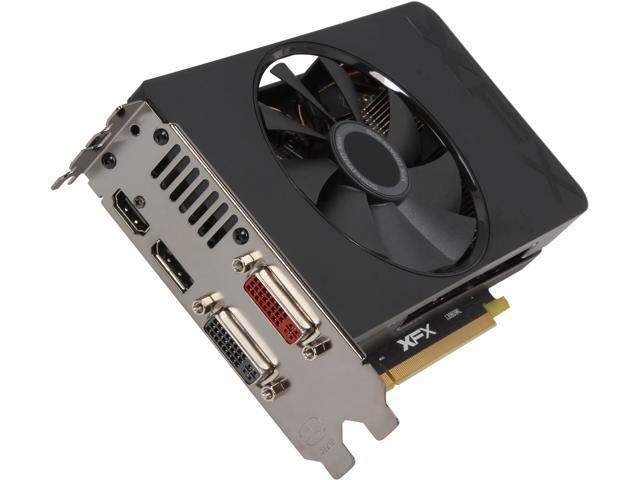 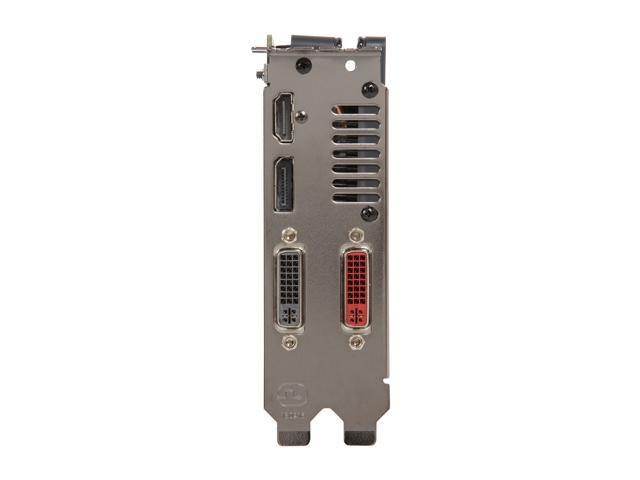 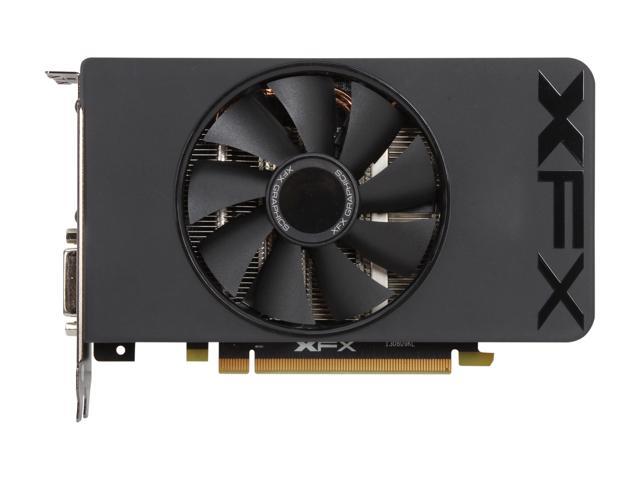 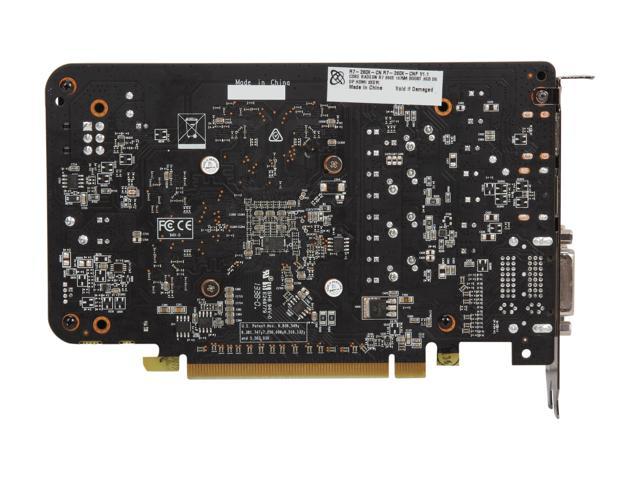 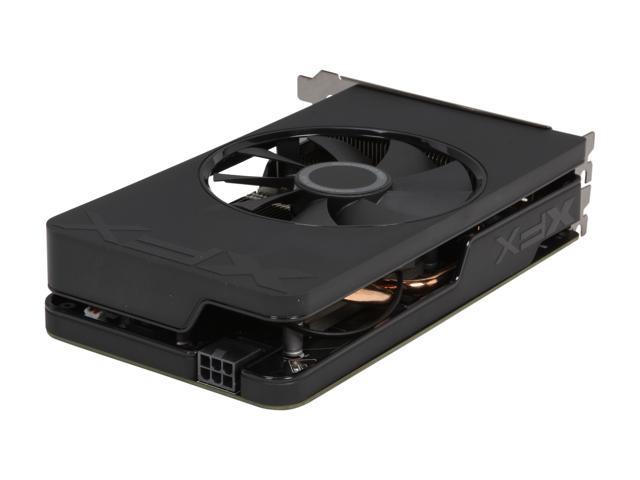 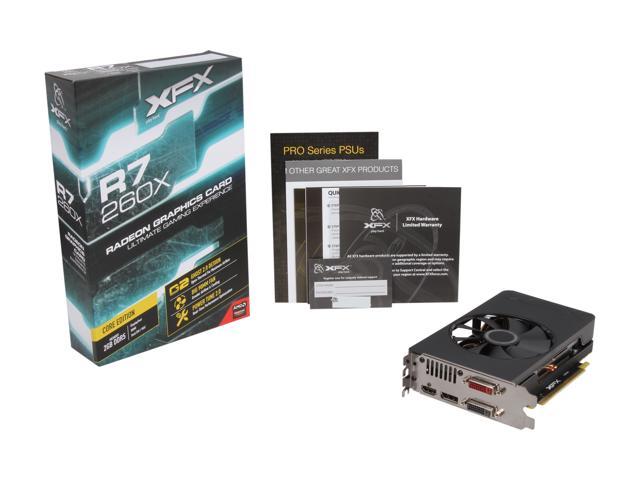 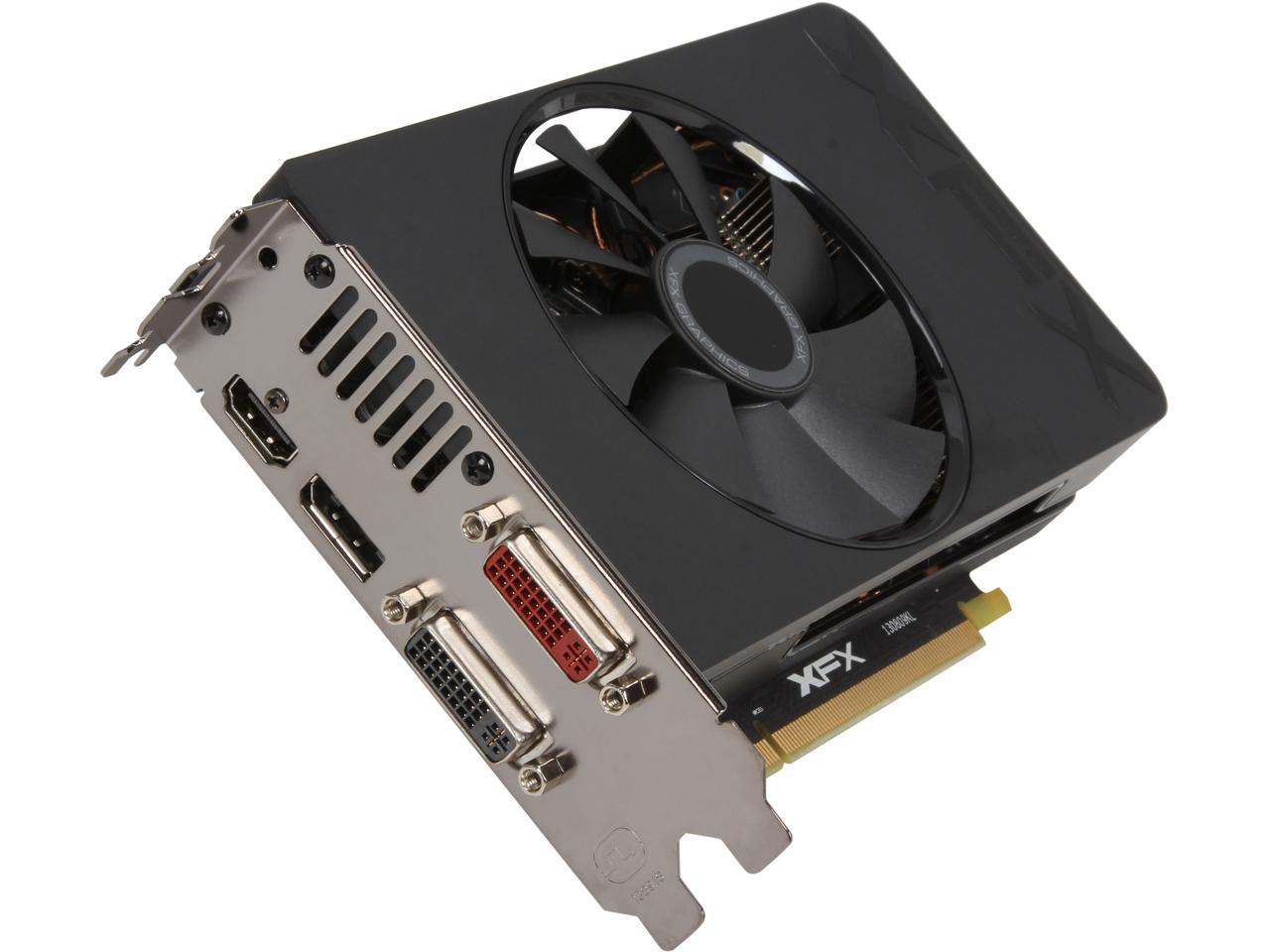 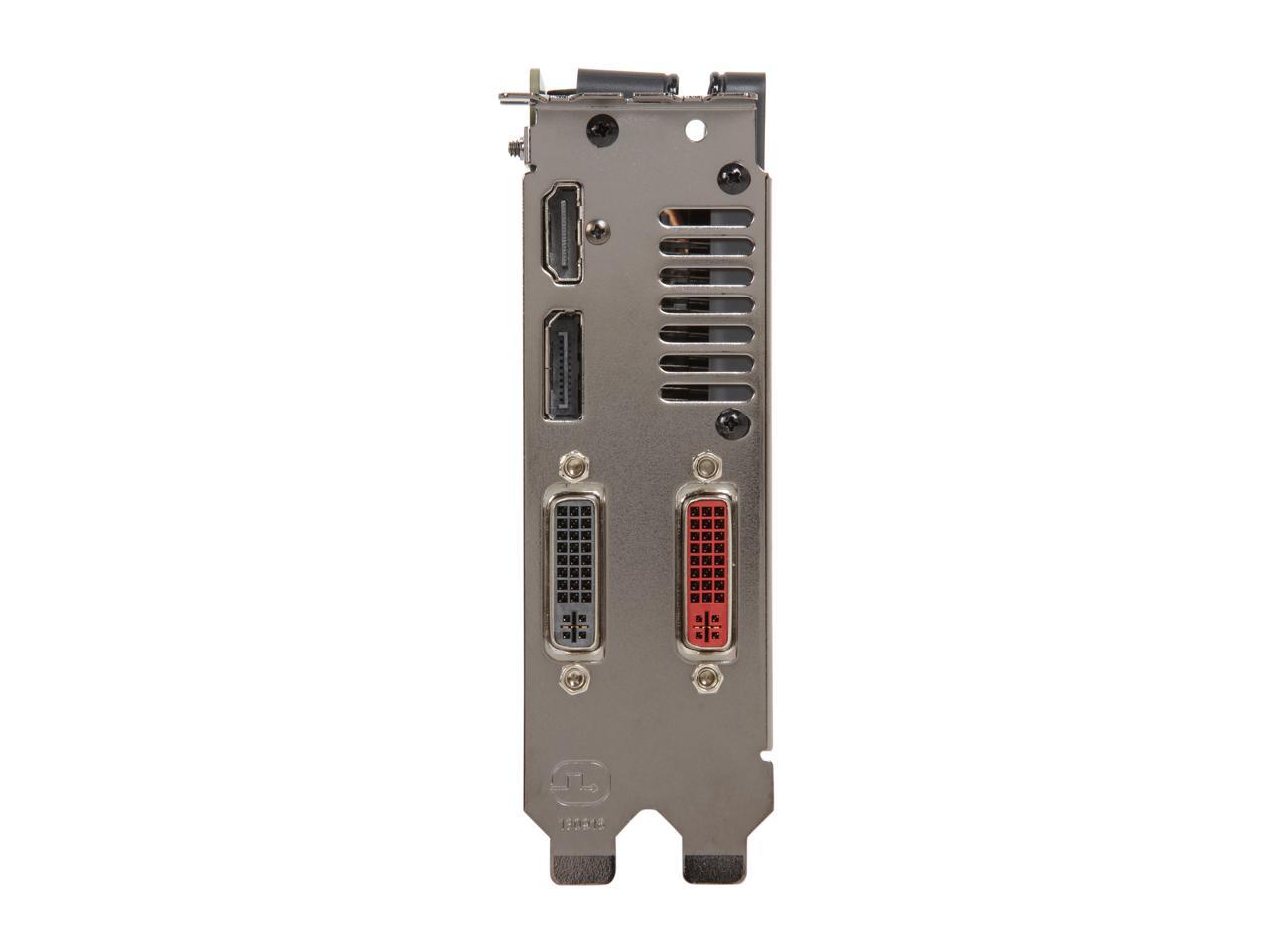 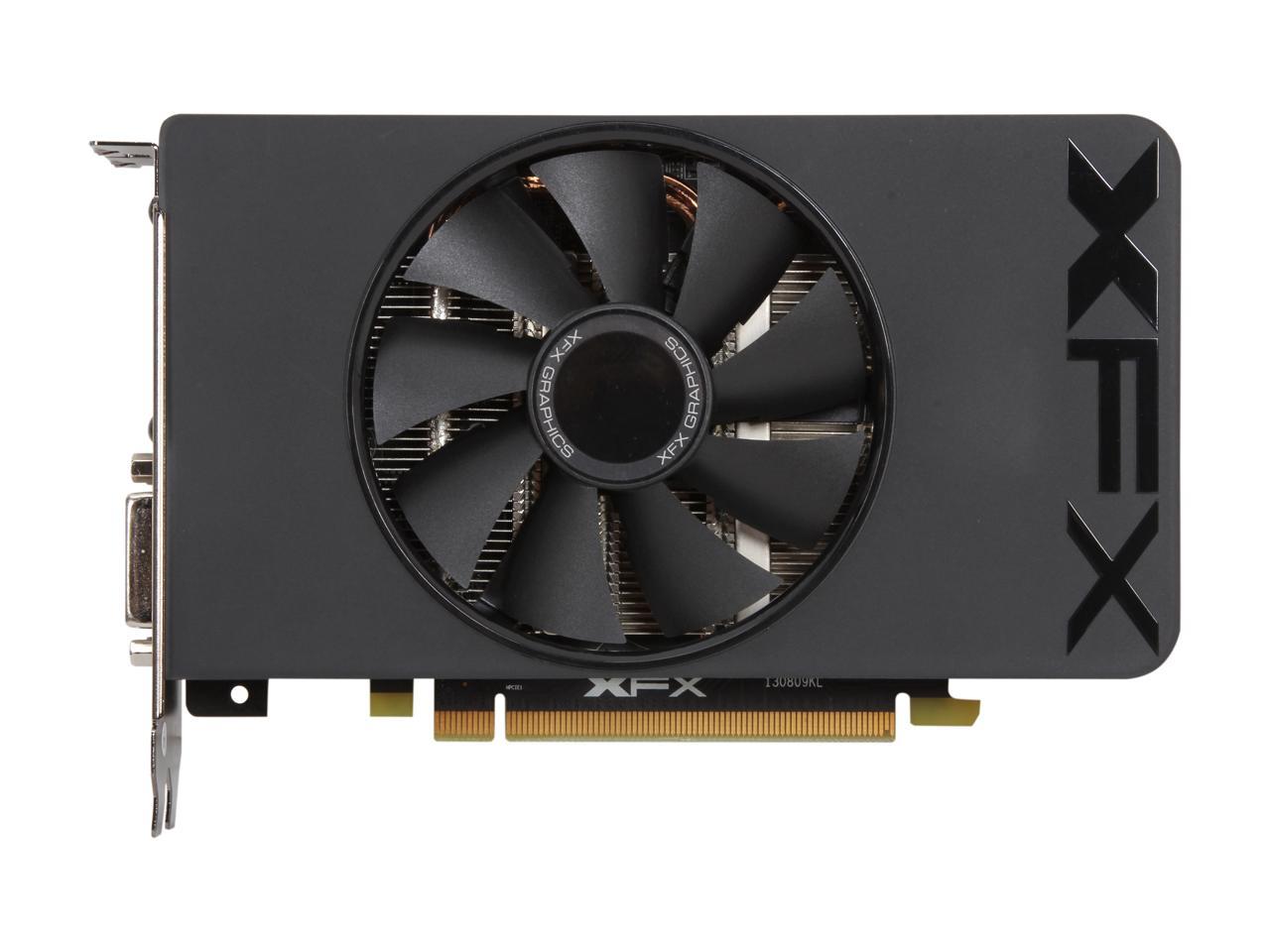 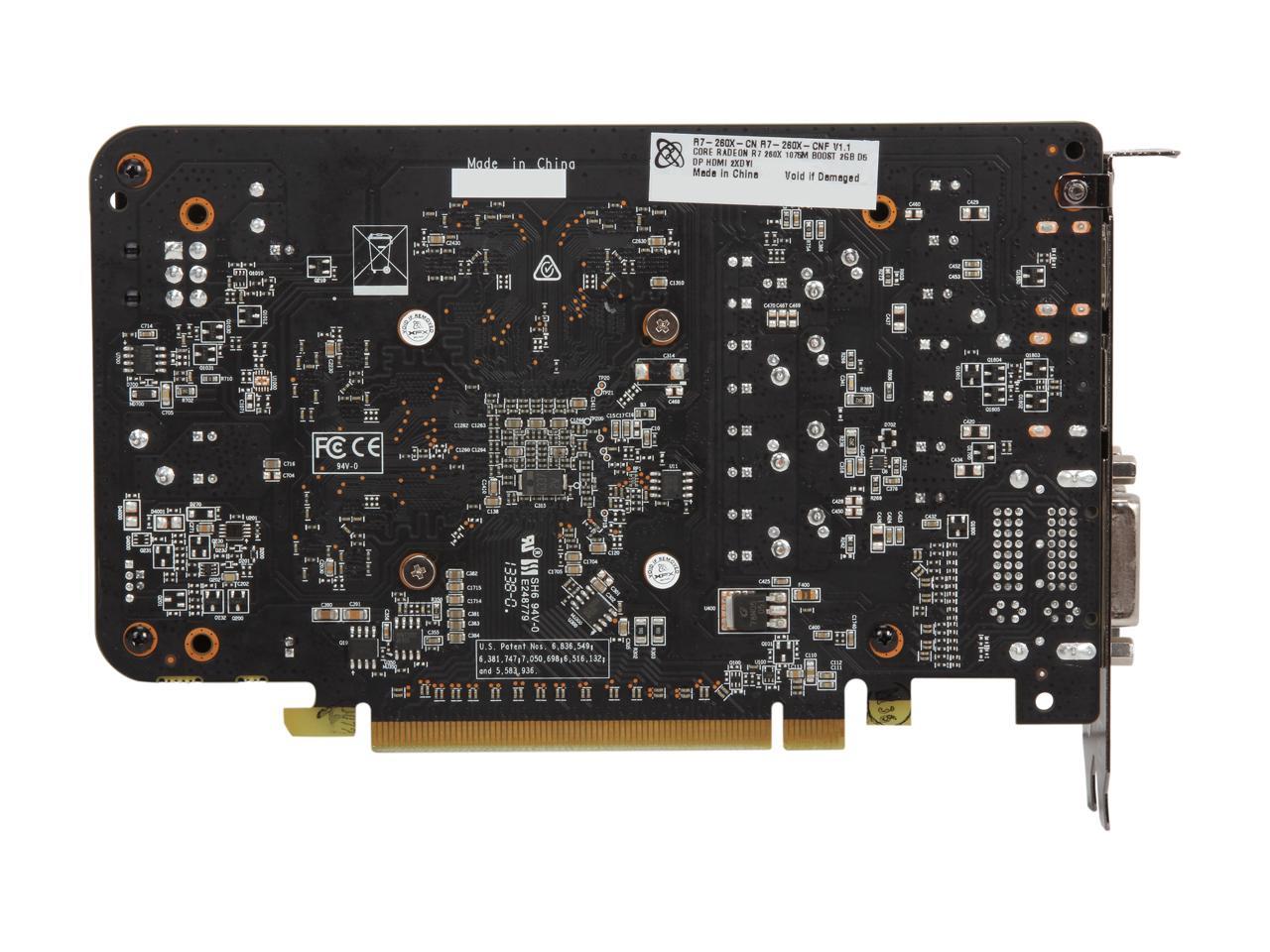 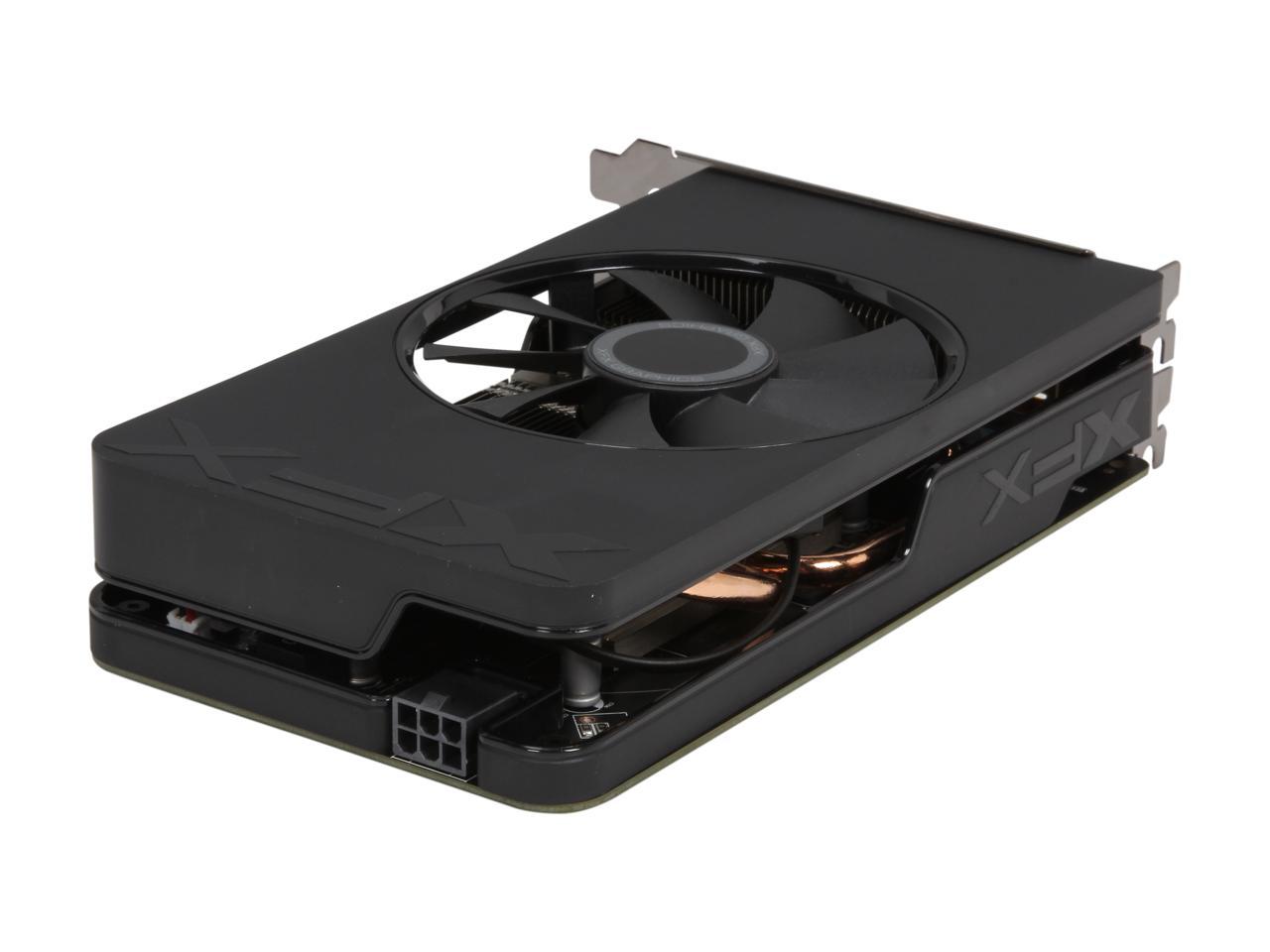 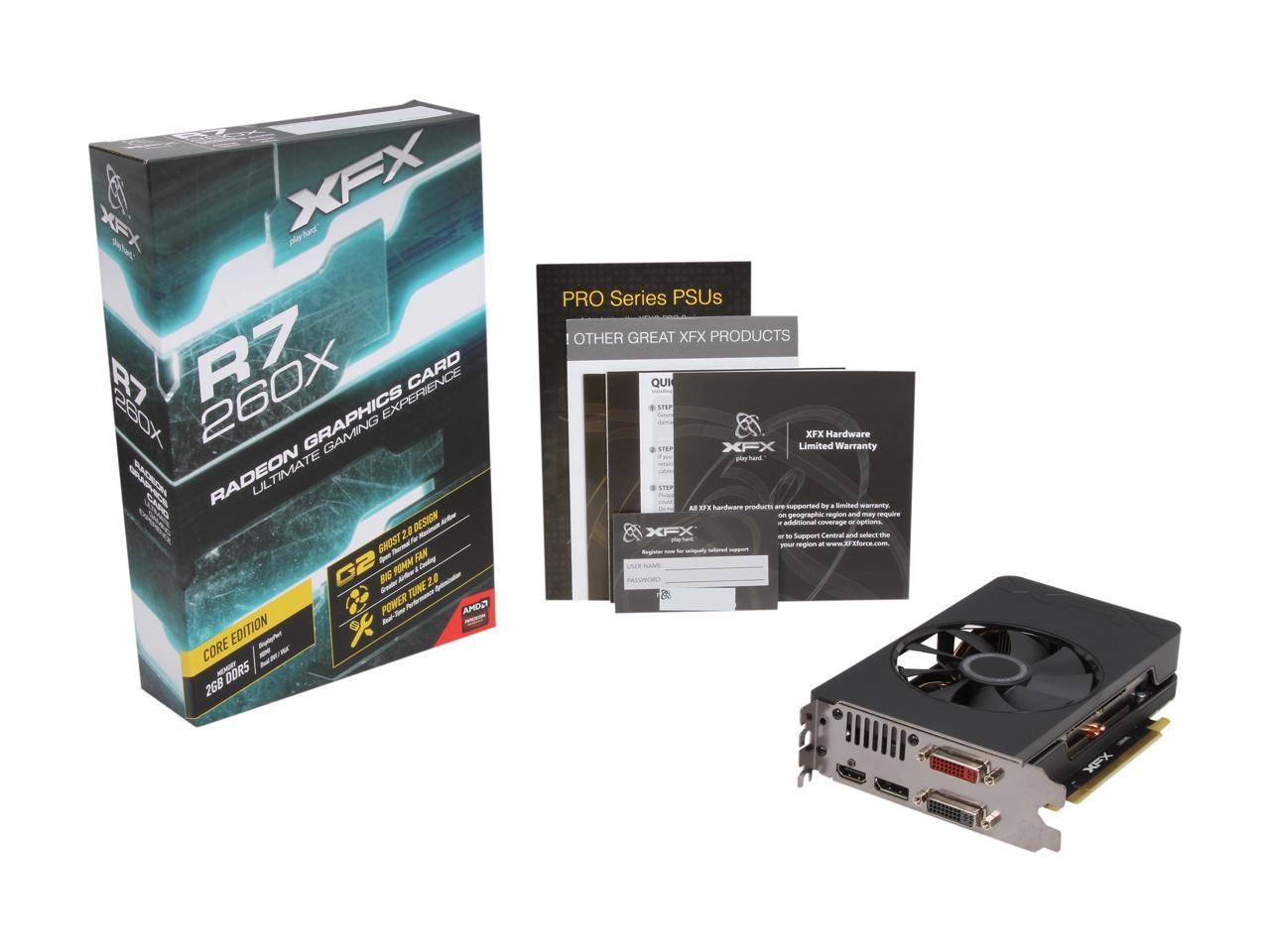 (42) Write a Review
OUT OF STOCK.
Overview
Specs
Reviews

The XFX R7-260X-CNF4 Core Edition is powered by Radeon R7 260X, the latest AMD GPU designed to take your gaming to the next level. Based on highly acclaimed AMD 28nm GCN architecture and boasting support for DirectX 11.2, the Radeon R7 260X brings you spectacular graphics in the hottest titles. You can game beyond the confines of a single monitor and embrace the true potential of PC gaming with the ultra-high resolutions of AMD Eyefinity multi-display technology. AMD TrueAudio Technology adds breathtaking reality to game sound, making your games more impressive. A rich set of AMD innovative technologies is included, such as App Acceleration, AMD PowerTune, AMD ZeroCore, and AMD HD3D technology. With these technology advancements, you'll get more than one way to elevate your gaming experience.

Cons: -I didn't buy it from new egg so i didn't get 2 free games :( -Dayz is still hard to run -and had some small issues installing drivers

Overall Review: overall amazing card and would buy a second if i had some leftover cash!

Manufacturer Response:
Hello Josh and thank you for the great review! We are happy you are pleased. If you have any questions, please contact us at neweggsupport@xfxforce.com. Play Hard!
Anonymous
Ownership: 1 week to 1 month
Verified Owner
A picture is worth "nuttin"5/10/2015 6:07:01 PM

Cons: The picture fooled me into thinking that it has two DVI-I connections, so if it failed to work right in Dual Graphics I could just use it on another computer that has two 2048 x 1536 monitors. The picture is wrong; one DVI-I and one DVI-D connection. Although XFX's website states "AMD Dual Graphics Ready" I couldn't get it to work in dual graphics mode with an A10-7850K.

Manufacturer Response:
Hello, We apologize for the confusion. The 260x doesnt work with the A10 Dual graphics, only the 250A or 250E will perform that special feature. Please contact us for further support or visit AMD Dual Graphics technology to learn more. XFX Support neweggsupport@xfxforce.com
Timothy M.
Ownership: less than 1 day
Verified Owner
Let's use R7 260X in XP32!1/5/2015 9:37:16 PM

Pros: Vastly faster than any video card I've ever used. Not going to set any records. Probably not even as good as a 4870. But heck. It runs the nVidia Chameleon demo at 1200fps @ 1600x1200. At least 80fps on everything else I throw at it including the Toy Store demo @ 1600x1200. I don't have anything too spectacular to test, but it certainly does the job.

Overall Review: I have no particular opinion on this specific brand of card. It's just what looked good at the time. Cooler seems adequate.

Manufacturer Response:
Hello, Thank you for the great review. The AMD drivers should be stable, please contact us if you are having issues. XFX Support. neweggsupport@xfxforce.com Play Hard!
Mark A.
Ownership: 1 day to 1 week
Verified Owner
Works Good2/27/2014 10:03:01 AM

Pros: Installed card, drivers, reboot, works fine with HDMI audio, no fuss in my HTPC. Loaded up Crysis 3, play is smooth and graphics are really nice at 1080p. Getting the 2 free games was a nice plus and there were no problems with redeeming any of the codes on Steam or with AMD.

Cons: Only thing was the bracket holes didn't line up very good with my case and had to force them in there but no biggie.

Manufacturer Response:
Hello and Thank you for the great review. If you have any questions or concerns, please contact us at Neweggsupport@xfxforce.com. Play Hard!
nate d.
Ownership: 1 week to 1 month
Verified Owner
this is a special response to XFX2/24/2014 3:15:53 AM

Pros: this is my first XFX graphics card and after 1 week all i can say is wooow what an upgrade from my 5770.. the quality of the card and heatsink are very nice thank you

Manufacturer Response:
Thank you for the great review. We are happy that you are pleased. If you have any questions, please contact us at neweggsupport@xfxforce.com. Play Hard!
Anonymous
Ownership: 1 week to 1 month
Verified Owner
Great card!2/20/2014 5:47:55 AM

Pros: Playing all my games on high, makes almost no noise, and stays very cool.

Manufacturer Response:
Excellent. We are happy you are pleased. Thank you for the great review. If you have any questions, please contact us at neweggsupport@xfxforce.com.
Dustin B.
Ownership: 1 week to 1 month
Verified Owner
Love it2/17/2014 5:37:41 AM

Pros: I bought this card to replace my gtx 240 and i will say i am fully satisfied with the R7 260x the max temps i've clocked in game is 70C which is what my gtx would idle at and it Handles every game that i play perfectly i give this a 5 star Would Fully recommend it to anyone lookin to switch cards.

Manufacturer Response:
Excellent. We are happy you are pleased. Thank you for the great review. If you have any questions, please contact us at neweggsupport@xfxforce.com.
jason w.
Ownership: 1 week to 1 month
Verified Owner
Black screen issues2/16/2014 1:04:16 AM

Pros: Card is all black, square, and small.. Price is very good when moving up from a much older Nvidia card. Runs Guild Wars 2 on high settings with FXAA auto detected. Frames are mostly 60 FPS with lows in the mid 40s in lively situations. Boss battles are much smoother than before.

Overall Review: I like the space that is saved inside my case from this being superior hardware and shrunk die compared to larger but older parts.

Manufacturer Response:
Hello, This sounds like there is an issue with the card, or system ram. Please contact us at neweggsupport@xfxforce.com for assistance. Thank you