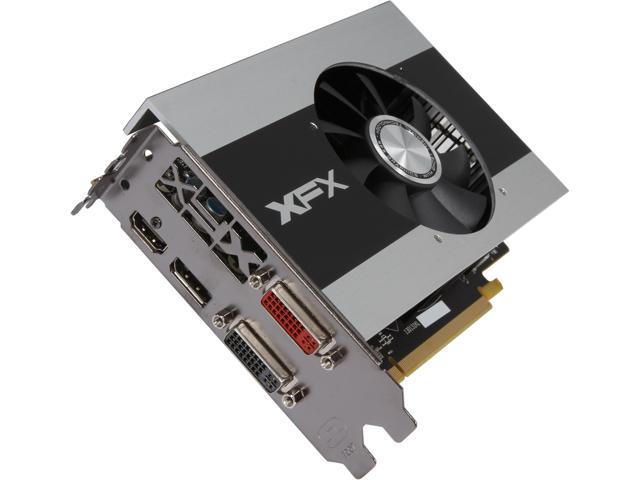 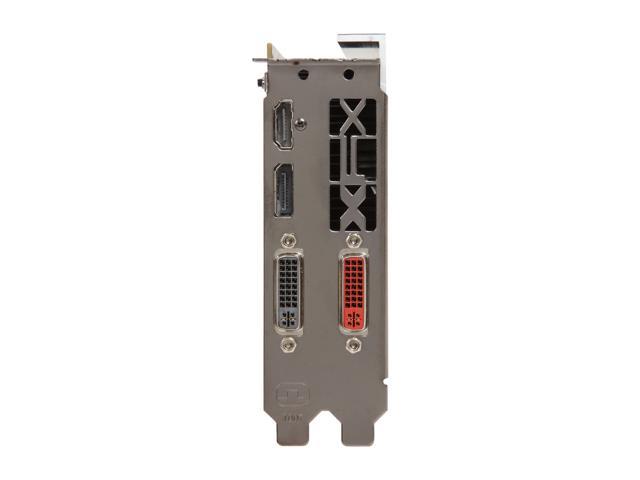 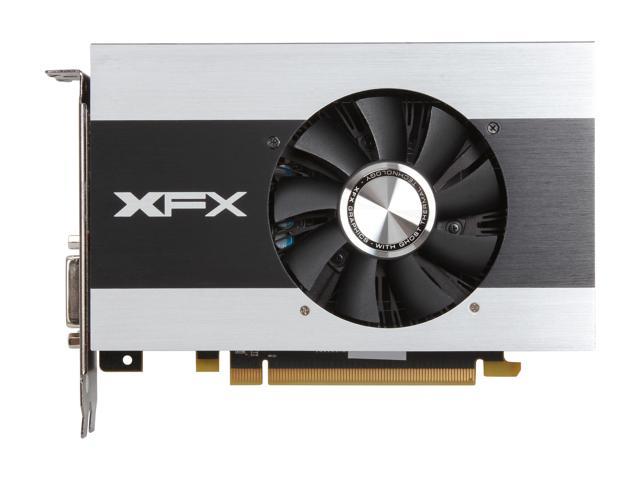 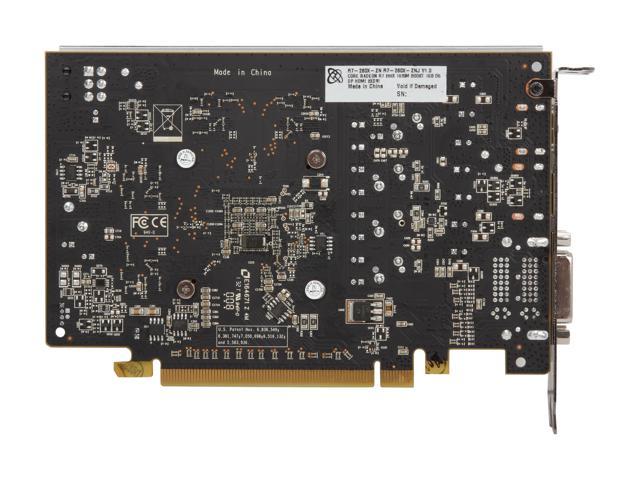 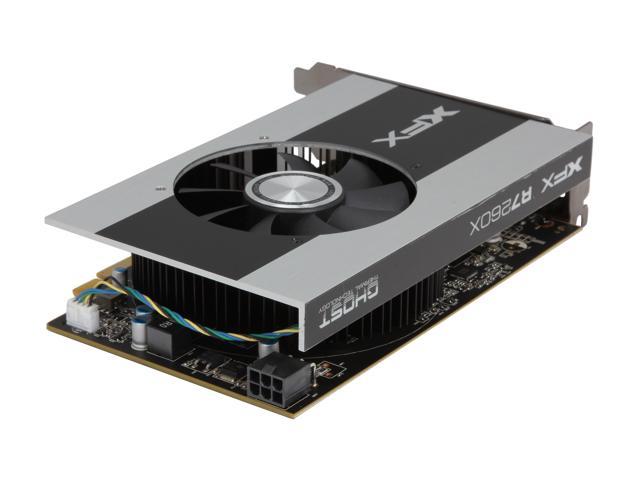 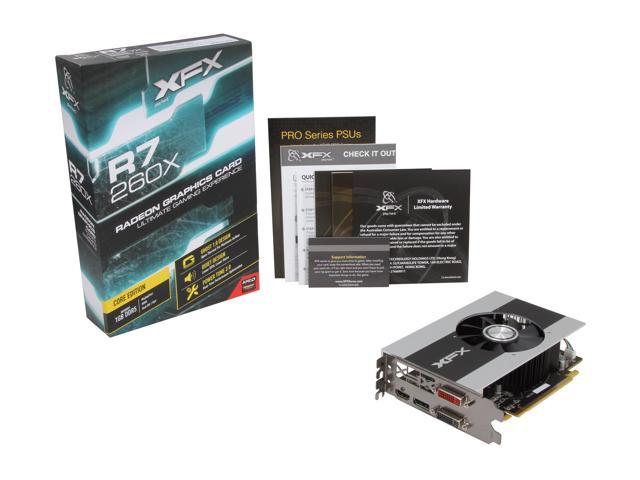 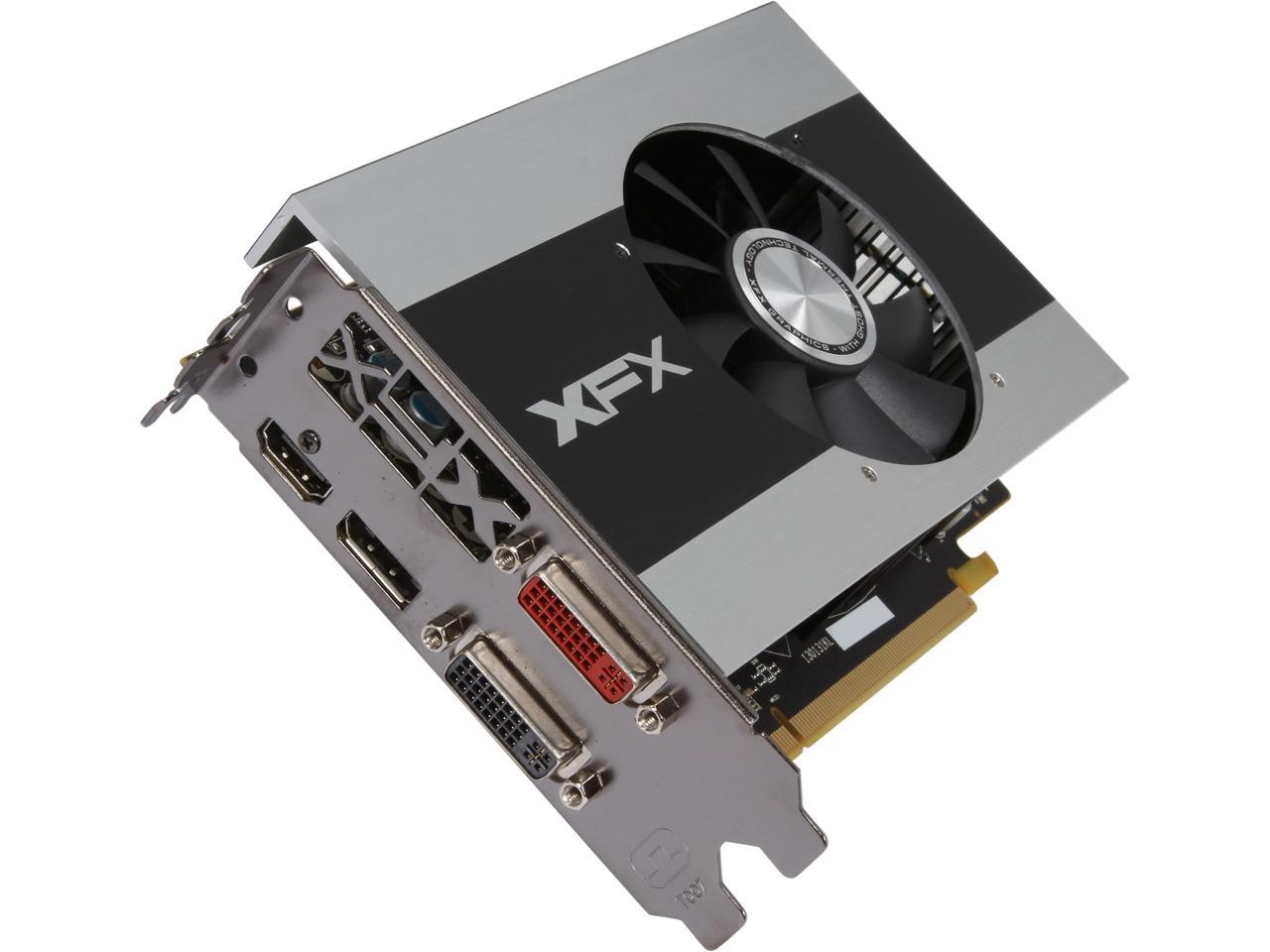 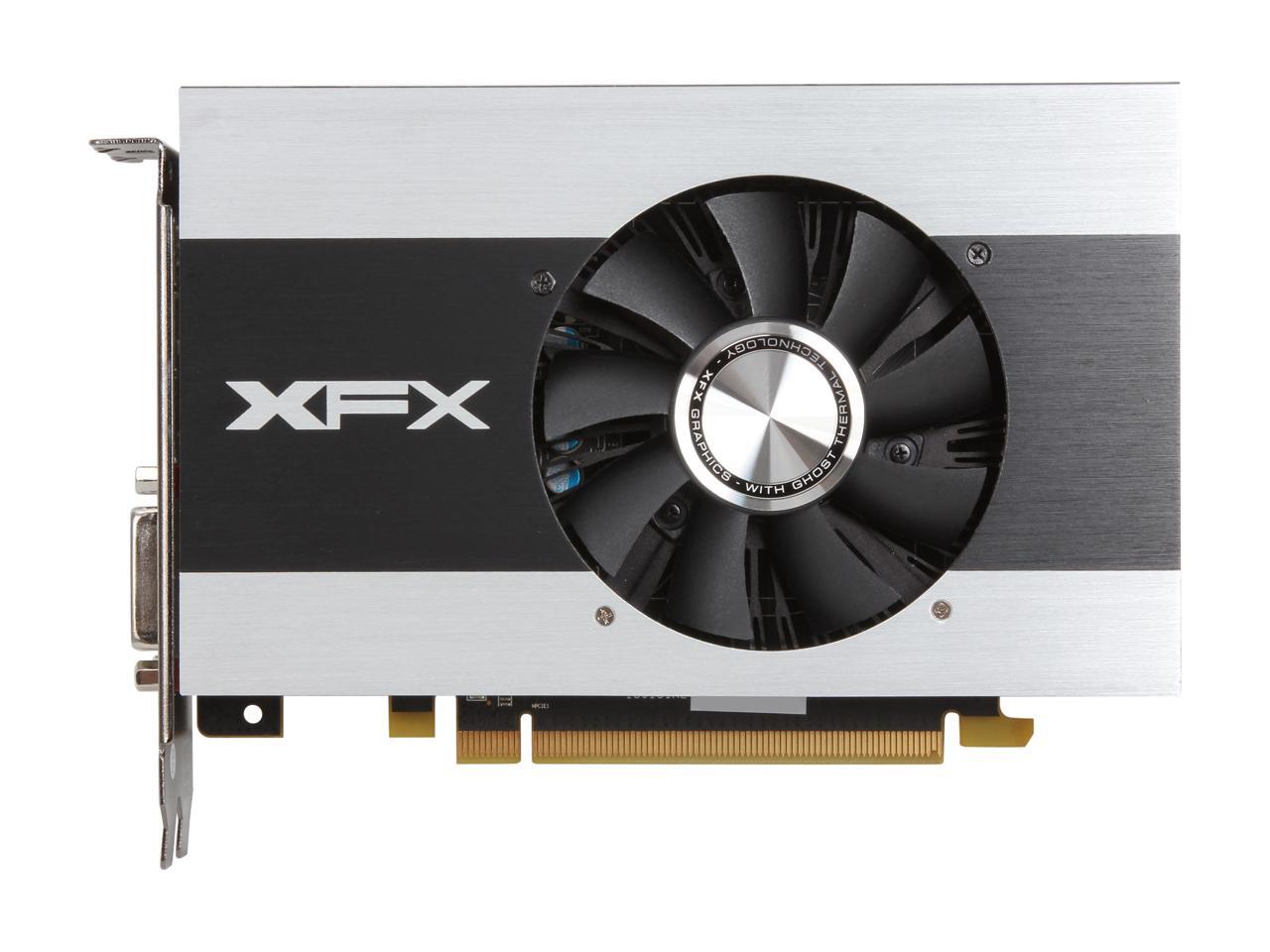 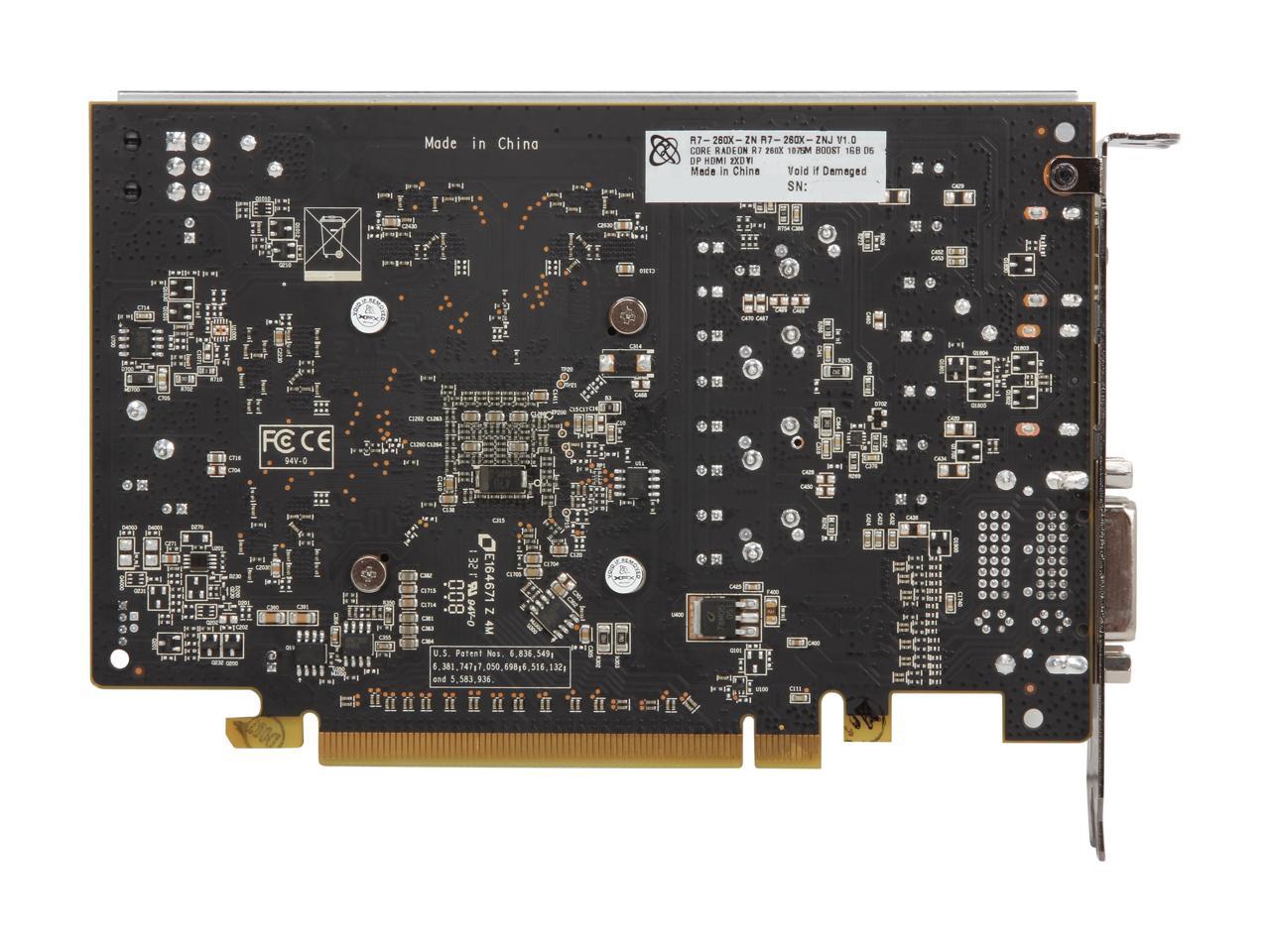 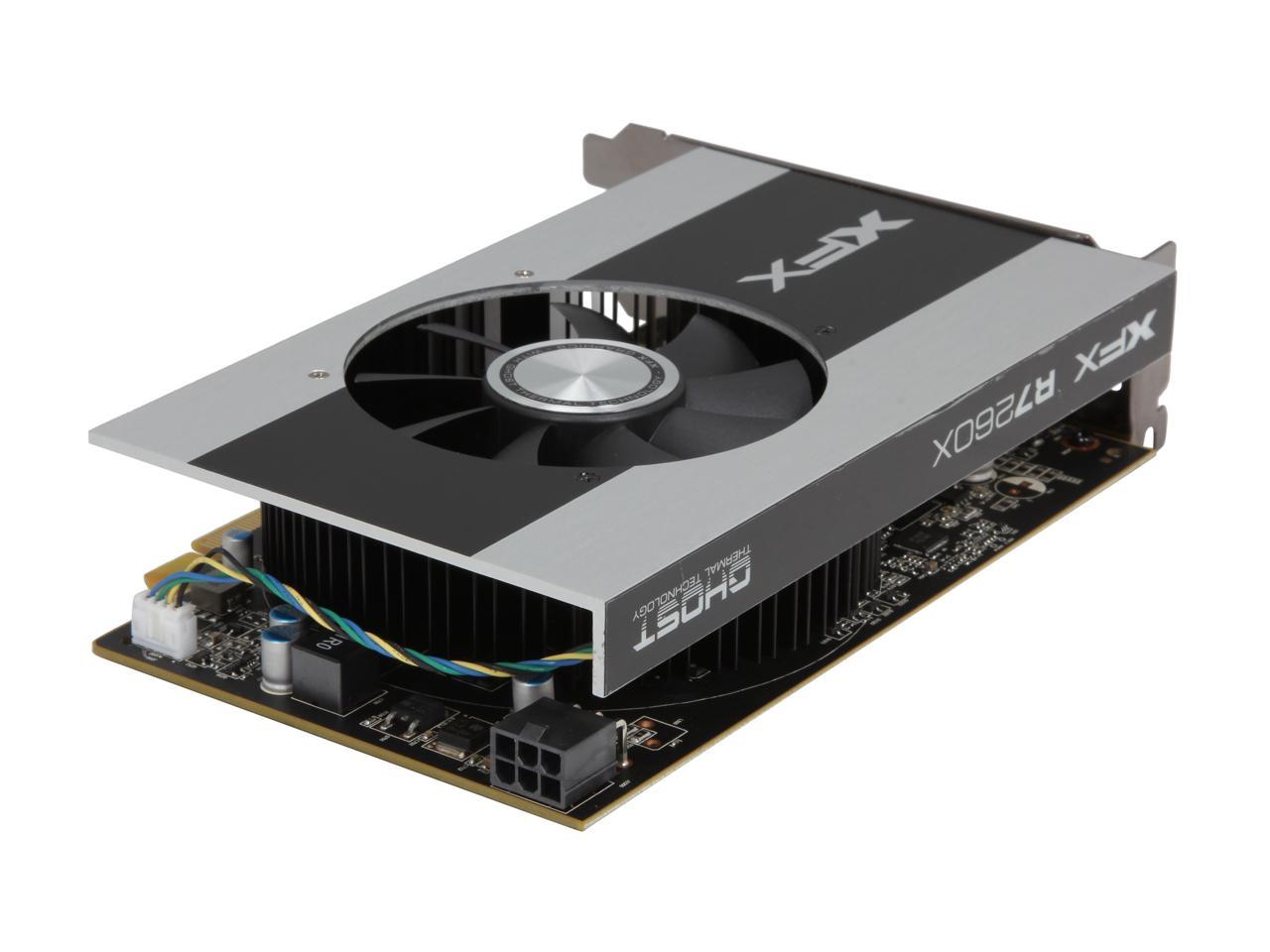 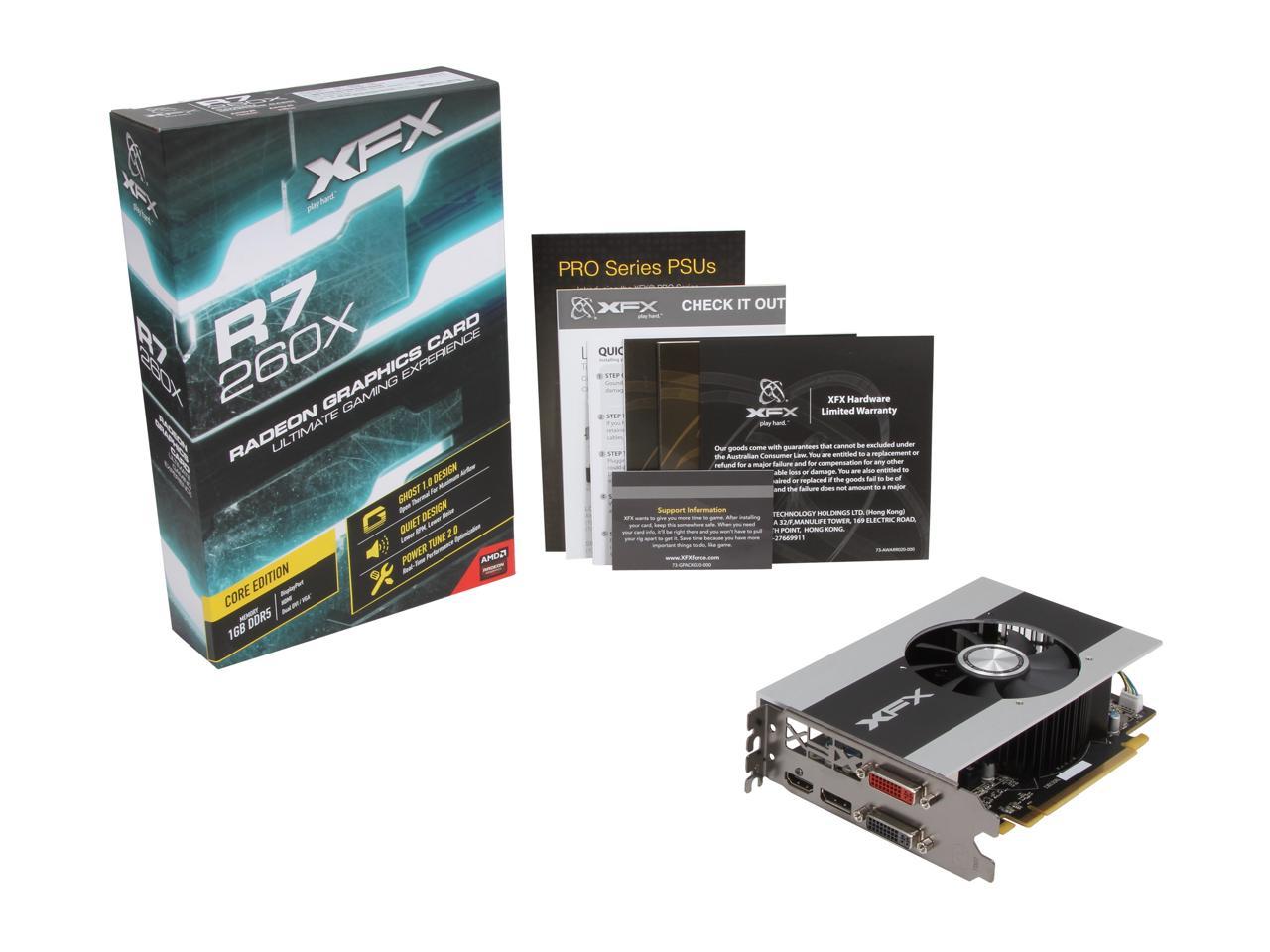 The XFX R7-260X-ZNJ4 Core Edition is powered by Radeon R7 260X, the latest AMD GPU designed to take your gaming to the next level. Based on highly acclaimed AMD 28nm GCN architecture and boasting support for DirectX 11.2, the Radeon R7 260X brings you spectacular graphics in the hottest titles. You can game beyond the confines of a single monitor and embrace the true potential of PC gaming with the ultra-high resolutions of AMD Eyefinity multi-display technology. AMD TrueAudio Technology adds breathtaking reality to game sound, making your games more impressive. A rich set of AMD innovative technologies is included, such as App Acceleration, AMD PowerTune, AMD ZeroCore, and AMD HD3D technology. With these technology advancements, you'll get more than one way to elevate your gaming experience.

Pros: Great for the price point vs performance

Overall Review: @ Christopher H. I'm certainly no OS expert so you'll have to excuse me if I use any wrong vernacular. Of course the cards going to work, whether it be a 32bit or 64 bit system. Unfortunately I don't think you've done enough research into the pro's and con's of 32bit vs. 64bit OS's though from the sound of your problem. It's certainly not related to the card and therefore should not receive a "lowered" rating based on a pre-mature purchase. Yes the OS will register "2.5GB" RAM because it has to account for the VRAM of the GPU which is 1GB, that being said the OS being 32bit can not register more than a certain amount which is why a 64bit OS is a good choice. Regardless of what GPU you buy, if it has 1GB of VRAM or more I am pretty sure you're going to have your "2.5GB" memory issue.

4 out of 4 people found this review helpful. Did you?
Manufacturer Response:
Thank you for the great review. We are happy you are pleased. If you have any questions, please contact us at neweggsupport@xfxforce.com. Play Hard!
Thackery B.
Ownership: 1 day to 1 week
Verified Owner
decent card for the price1/27/2014 11:12:40 AM

Pros: Card is cheap, and the value is increased thanks to the bundled games deal! Performance is significantly greater than my old GeForce 9800gt

Cons: Noisy - this card is virtually silentsilent at idle and in low performance situations. But that little fan ramps up to quite a roar when the temps start to hit 50c

Overall Review: I can run Skyrim, Fallout NV, Dishonored on ultra settings at 1680x1050 with this thing. Skyrim and Fallout hover around 55-61 fps when running around town and the countryside at this setting, but with some occasional drops to 45fps or so if fire effects and chaos gets thick. Dishonored runs at 80-100 fps at these settingssettings with mxaa selected. No joke. Pretty impressive for the price range, although these games are hardly "Crysis"! But it really got unacceptably noisy, especially in Dishonored where performance was essentially unfettered. Temps never broke 60c, mind you, but I decided I need a card with a bigger fan or maybe twin fans to keep things away from really high rpm fan noise. I was disappointed given that this isn't a really turbocharged card by any means. Drivers are still beta... Works better in Windows, but worse in Ubuntu, than my old 9800gt. Still, one can only assume this will continue to improve. In fact, the fan speed and noise was better with the newest amd drivers than those that came with the card.

4 out of 4 people found this review helpful. Did you?
Manufacturer Response:
Thank you for the great review. If you have any issues, please contact us at neweggsupport@xfxforce.com. Play Hard!
Mikhail T.
Ownership: 1 month to 1 year
Verified Owner
Good bang for the buck.3/17/2014 1:00:21 AM

Pros: Works well. Especially considering the price, let's you play most games with decent resolution and mid to ultra settings. Saw a couple of benchmarks online for this particular card, was able to reproduce the scores to within 0.5%. Which is pretty rare in my opinion. Running for 2 months no issues.

Overall Review: When bought, AMD & Steam didn't recognize the card with their auto detect functionality for driver install, which was annoying. However, since 2/24/2014 that issue seems to be resolved.

3 out of 3 people found this review helpful. Did you?
Manufacturer Response:
Thank you for the great review. We are happy you are pleased. If you have any questions, please contact us at neweggsupport@xfxforce.com. Play Hard!
Mark S.
Ownership: 1 day to 1 week
Verified Owner
260x1/11/2014 1:21:00 PM

Pros: What's great about it:High performance at a low cost, low power consumption, Future proof with AMD TrueAudioWhat's not so great:Not the cheapest version of this card, possible compatibility problems with newer versions of windows.I've been using a 5870 for nearly 4 years now. This new card simply demolishes that card at 1/3rd the power consumption. Fans are really quite What's not so great:N/AI have played Crysis 3, Call of Duty Ghost, Dues Ex and the Video output is phenomenal. I Love this card. The fans I can hardly hear them.

3 out of 3 people found this review helpful. Did you?
Manufacturer Response:
Thank you for the great review. If you have any questions or concerns, please contact us at neweggsupport@xfxforce.com. Play Hard!
Anonymous
Ownership: 1 week to 1 month
Verified Owner
Good for the money7/10/2014 2:50:03 PM

Pros: Runs all my games on max settings, and it's fan is really quite. Gets the job done for the price.

Cons: (In Other Thoughts because I believe its a driver issue)

Overall Review: I bought this knowing the drivers were not the best out there, but I took a chance and it was a good one i think. Since i got this though sometimes my display will flicker, with a graphical tear looking thing, and just recently my display turned off and my pc shut down but that could be heating related I dont know if this is just because it got to hot or if its just the drivers but other then that nothing wrong with it. System specs: CPU: AMD Athlon II X4 740 clocked at 3.7 Ghz CPU Cooler: Cooler Master Hyper 212 EVO, with Arctic Silver 5 High-Density Polysynthetic Silver Thermal Compound GPU: (AMD) XFX Radeon R7 260X 1GB GDDR5 Mobo: Asus A55BM-PLUS CSM Ram:Team Elite 4GB (2 x 2GB) 240-Pin DDR3 SDRAM DDR3 1333, and G.SKILL AEGIS 4GB 240-Pin DDR3 SDRAM DDR3 1333 HDD: 320GB WD PSU: 860 Watts

1 out of 1 people found this review helpful. Did you?
Manufacturer Response:
Hello and thank you for the thorough review, we appreciate the postive feedback. Screen tearing and artifacting isnt usual a driver issue, but more like 3rd party software interfering with the drivers. We can fix this with a proper installatoin. If you have any questions, please contact us at neweggsupport@xfxforce.com. Play hard!
Shane S.
Ownership: 1 month to 1 year
Verified Owner
Excellent Mid-tier4/8/2014 2:15:47 AM

Pros: I love this thing. It looks sleek, and all the parts - including the faceplate and fan - look well-made and solid. The card is quiet when not under load and even though it rev's up under stress, it isn't anything noticeable after the card has been given time to adjust. The newest drivers, some hard gaming, and It's nearly quiet until I set everything up to Ultra. It makes some noise then, but I haven't run across any framerate that wasn't buttery-smooth.

Cons: Bit of a pain getting the drivers installed, but I doubt that hasn't been said at some point for every existing video card/gpu in existence.

Overall Review: I didn't get the promo games that were sold with it around two hours after I processed my purchase. It'd be nice to have them ( Tomb Raider looks awesome ) but that isn't the fault of Newegg or XFX. Just my poor timing, and in no way a con.

1 out of 1 people found this review helpful. Did you?
Manufacturer Response:
Thank you for taking the time to write your review. We are very happy you are pleased. If you have any questions, please contact us at xfxsupport.com. Play Hard!
Penny C.
Ownership: 1 week to 1 month
Verified Owner
Wow...Just Wow4/5/2014 7:41:21 PM

Pros: Price to power ratio, Surprisingly fast, Despite what others are saying mine seems to be pretty quiet and cool with load temps reaching a peak of 55 C. It can also be overclocked with very little effort though I haven't done it to time yet. Oh yeah and I loved the 2 free game promo I got when I got this card.

Cons: Cons... It won't make me a sandwich and it didn't come with a XFX case badge. Not a R9 series card.

Overall Review: When I said it wasn't a R9 series, I already knew that when buying it, but this thing is a little beast of a card. Every game I have thrown at it so far has played on high to ultra settings at 1600x900.

1 out of 1 people found this review helpful. Did you?
Manufacturer Response:
Thank you for taking the time to write your review. We are very happy you are pleased. If you have any questions, please contact us at xfxsupport.com. Play Hard!
Brian C.
Ownership: 1 week to 1 month
Verified Owner
A future proof budget card2/21/2014 11:53:54 AM

Pros: Good power for the price, Runs relatively cool under heavy load even in a Micro-ATX Case (50C-60C at most)

Overall Review: It can be a little loud with fan speeds at 100% but I have heard MUCH worse. Don't even notice it when gaming and sound is up.

1 out of 1 people found this review helpful. Did you?
Manufacturer Response:
Thank you for the great review! We are glad you are pleased. If you have any questions or concerns, please contact XFX at neweggsupport@xfxforce.com. Play Hard!