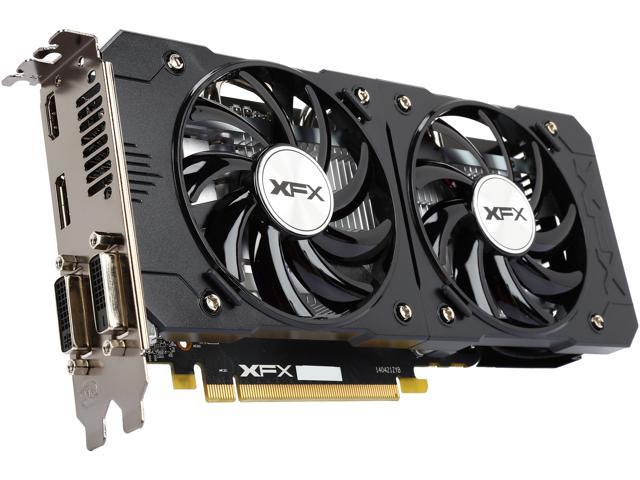 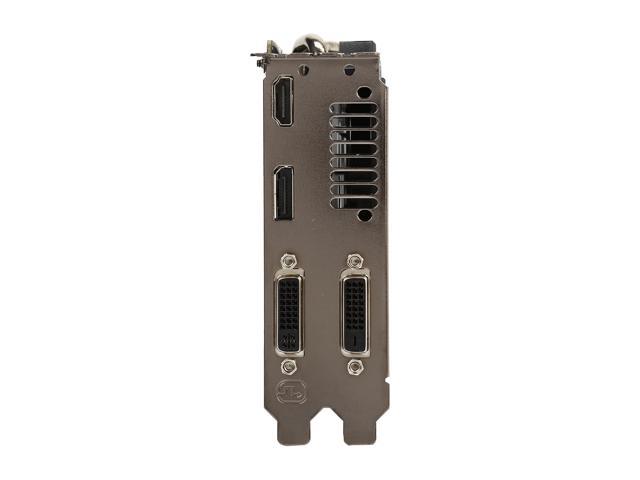 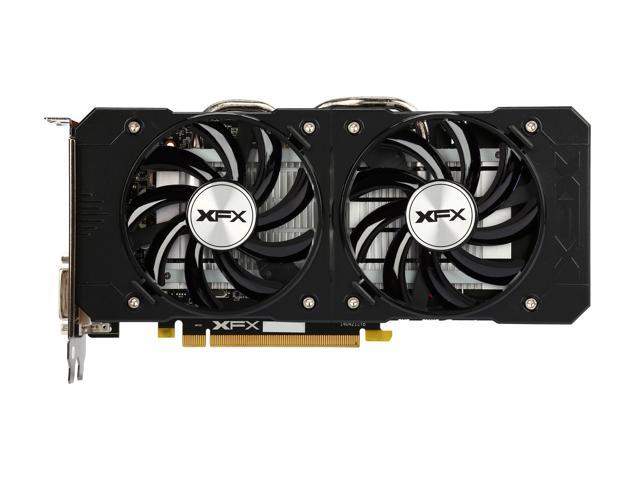 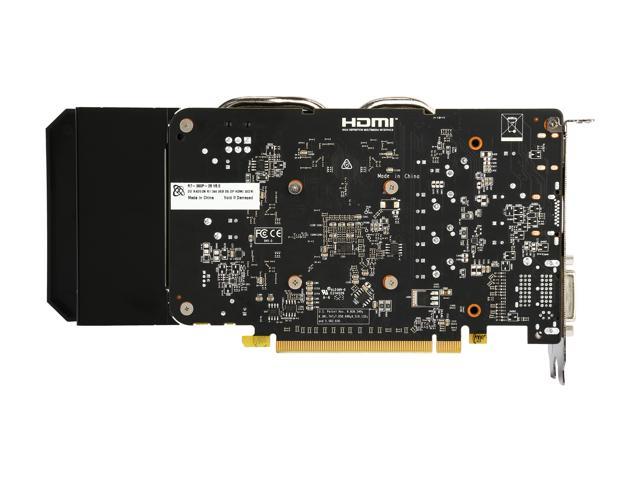 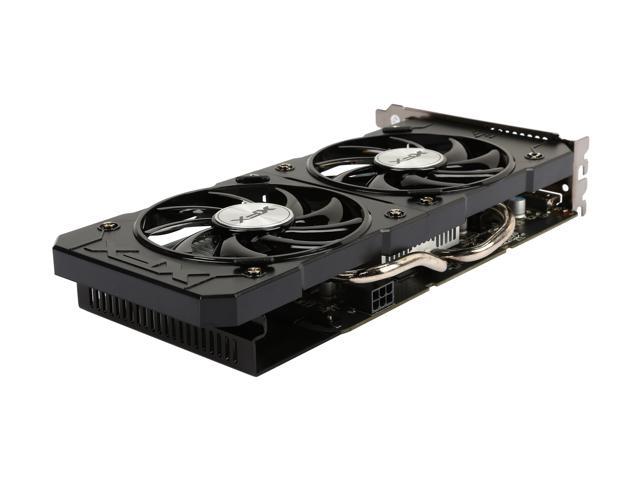 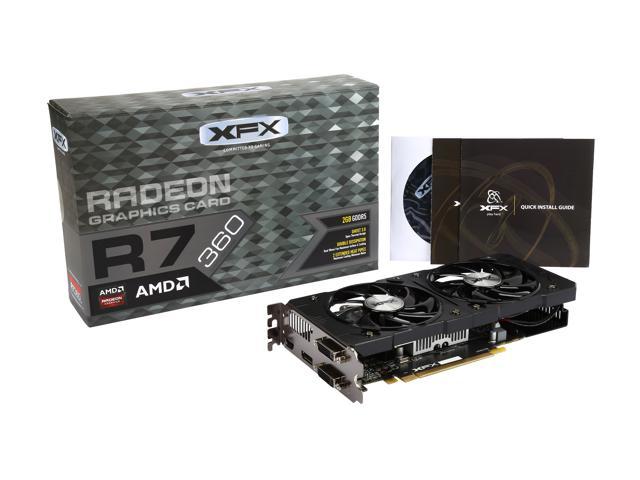 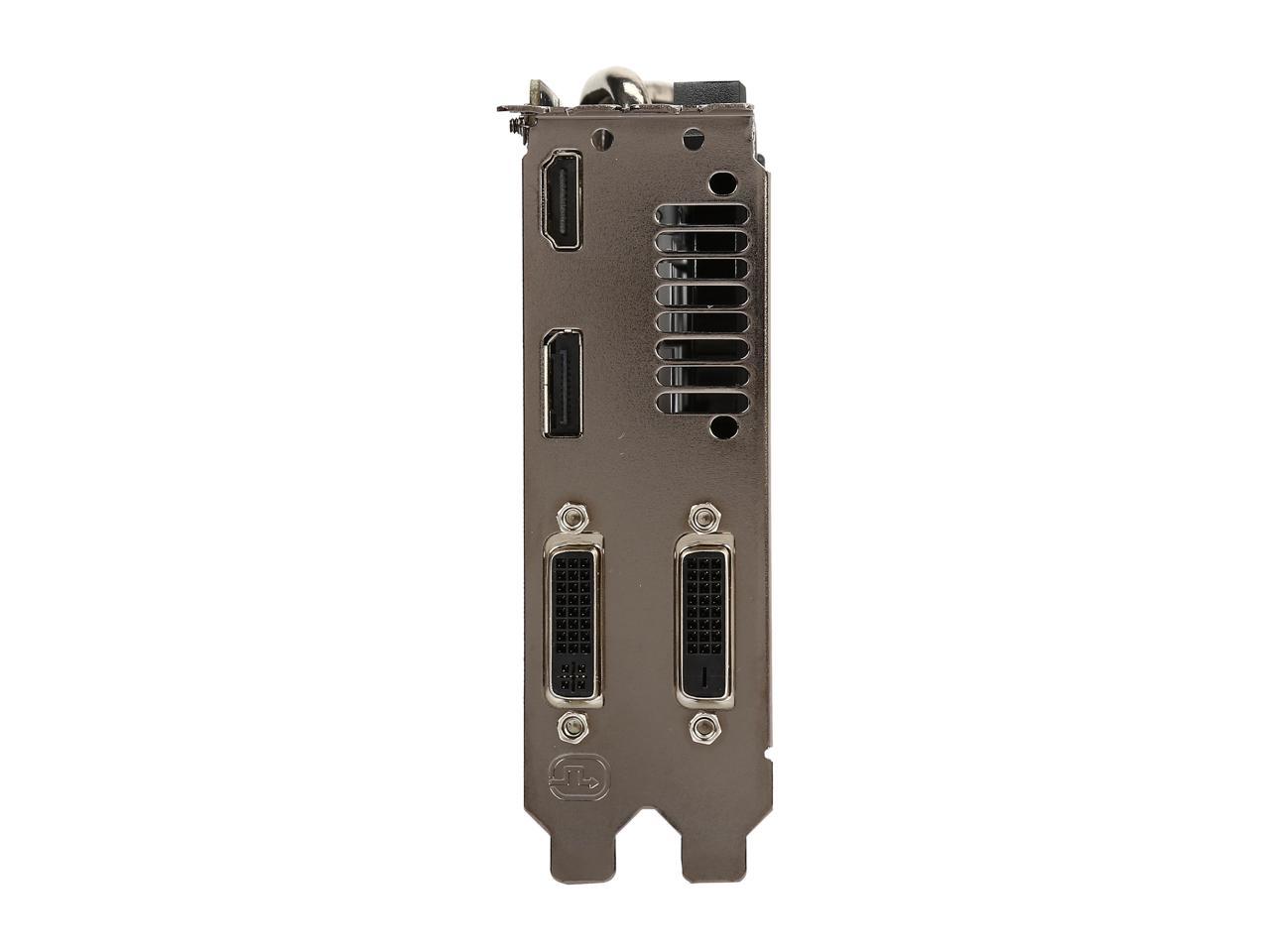 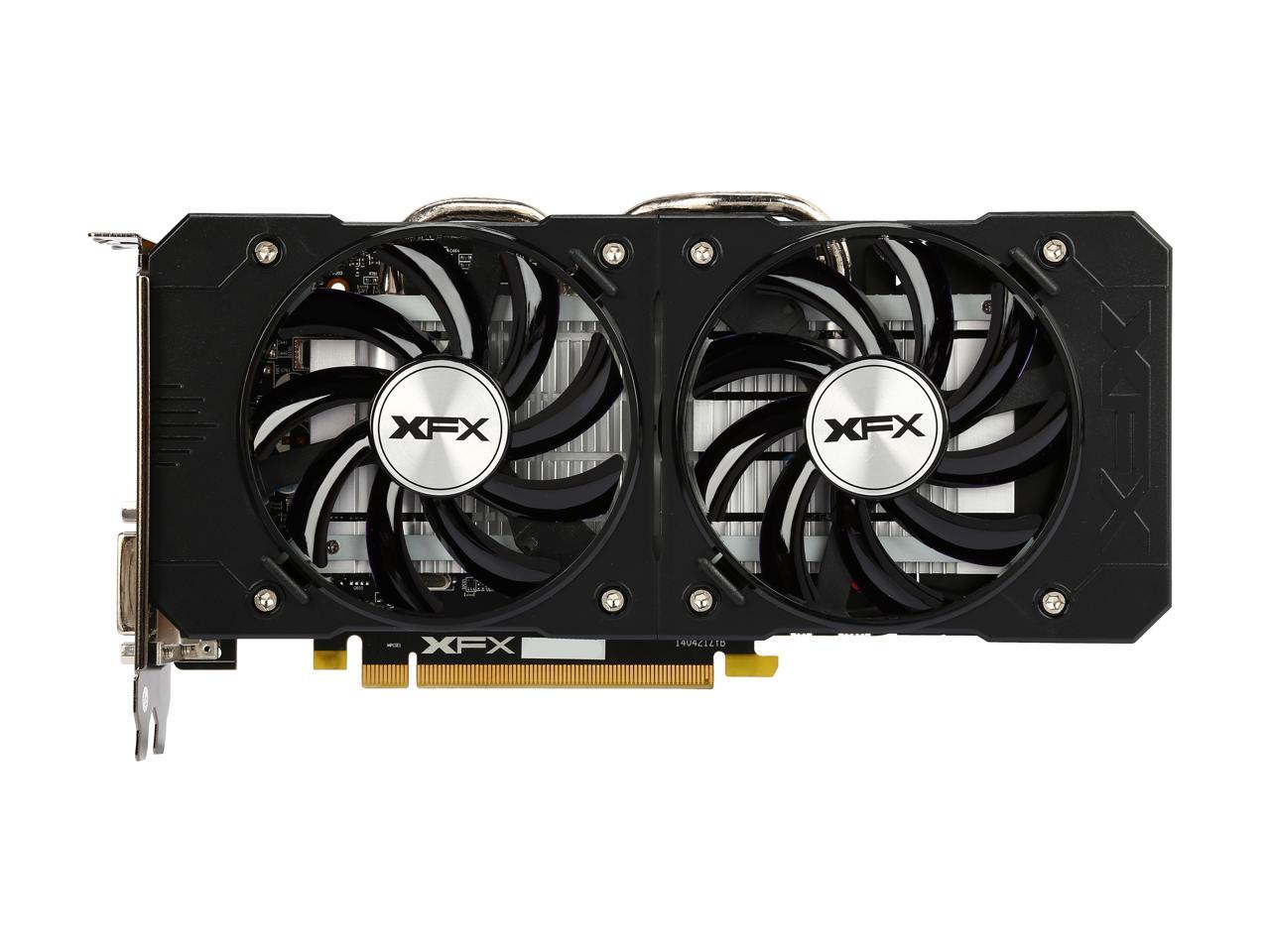 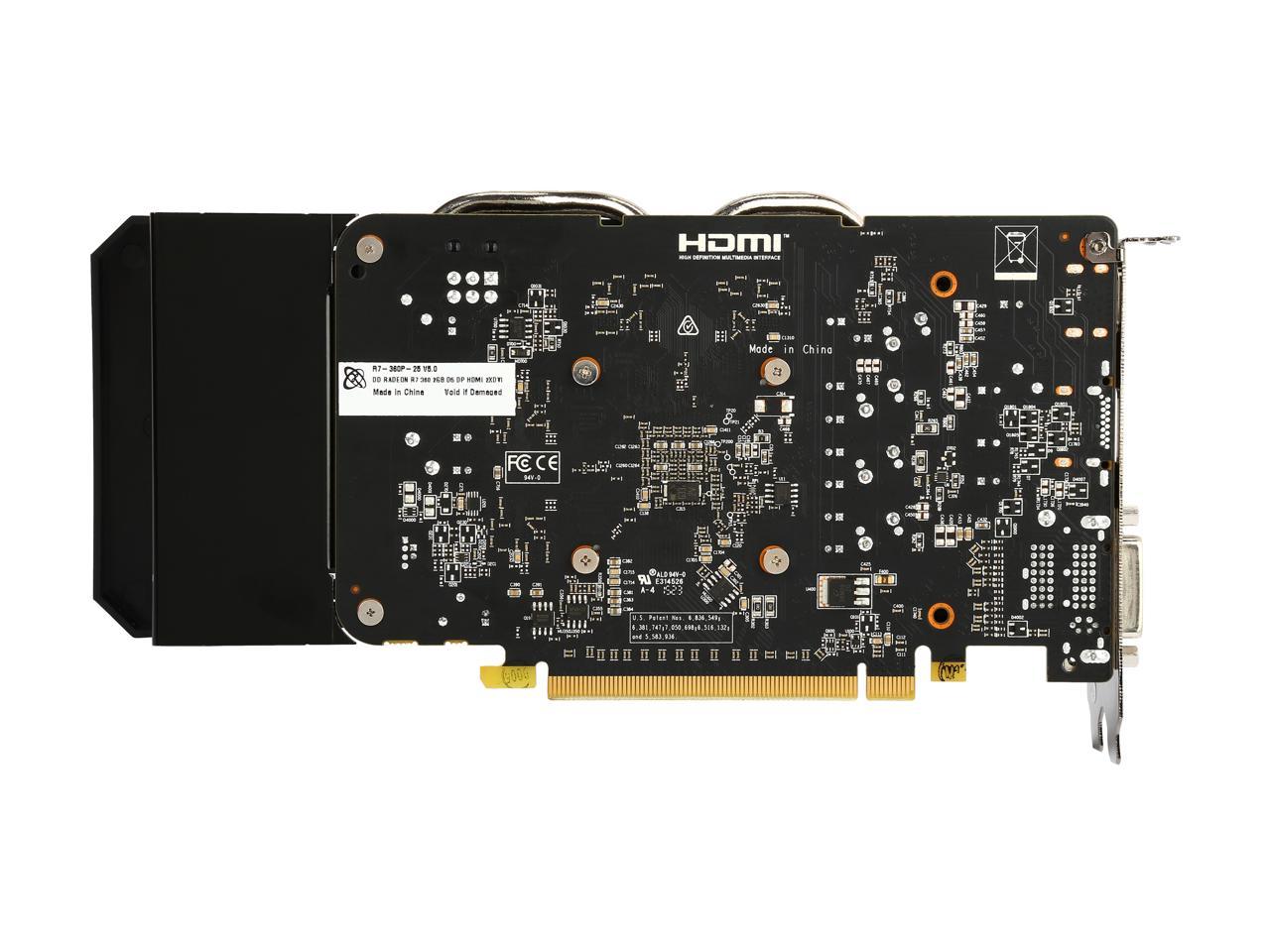 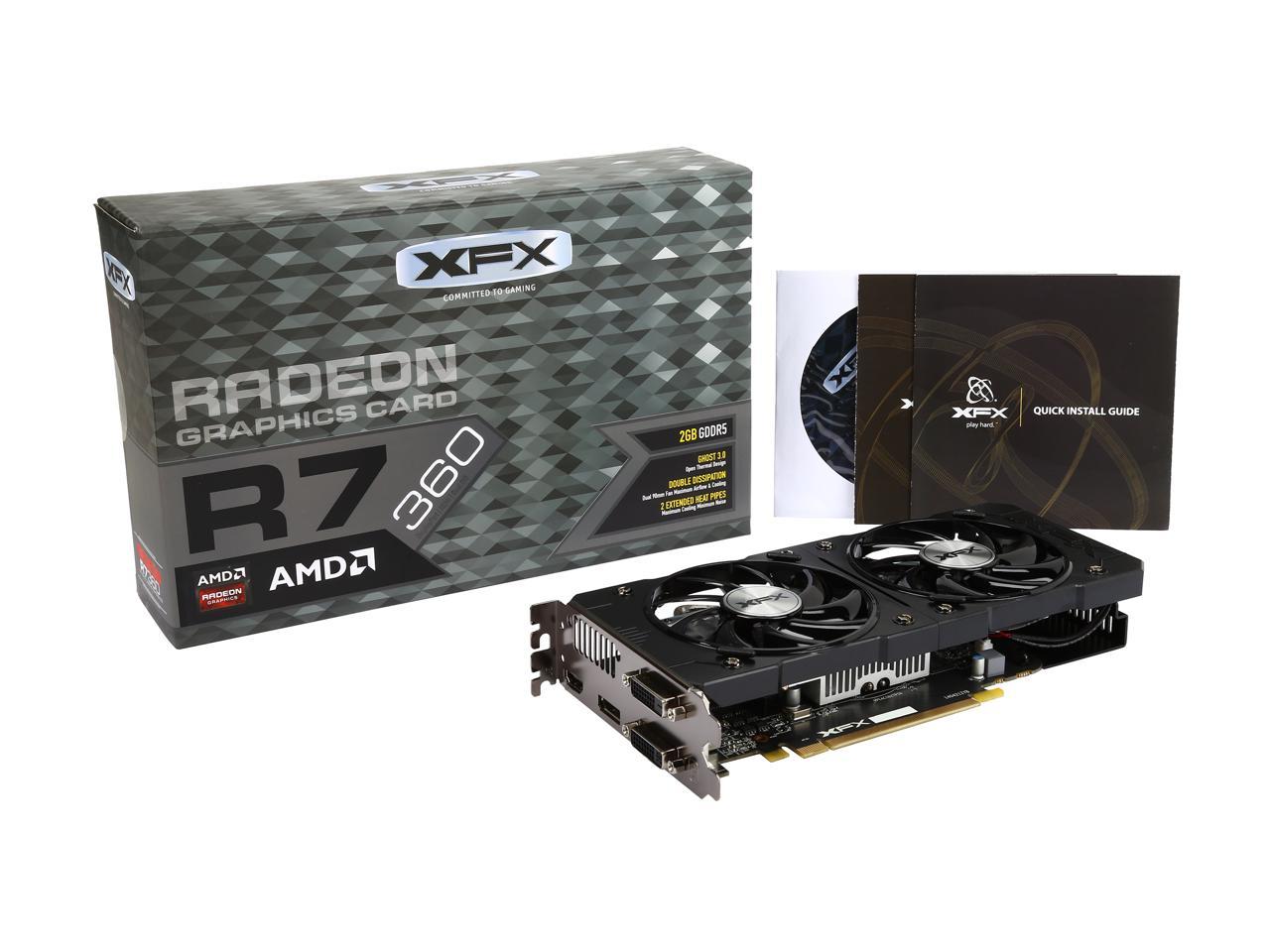 New Improved design, all new optimized fin arrays and lengthened electro plated heatpipes for unprecedented efficiency and performance. Play at your hearts content for hours on end with the comfort of knowing that your card is running cool and efficient. For Gamers that Demand the Best.

The XFX Radeon R7 370 graphics card is made for online competitive gaming helping you crush the competition in todays hottest MOBAs, FPS, and MMORPG games; with high-performance features and visual realism that take your skills to the next level.

A whole new dimension of gaming, for a whole new reality. Your days of gaming in mere HD are behind you. AMD Radeon R7 360 GPU delivers all the power you need to play the hottest online games in stunning detail along with smooth, stutter-free gameplay, thanks to AMD FreeSync technology. Maintain the highest possible frame rates while connected to FreeSync monitors without sacrificing performance. Every gamer deserves perfectly smooth, realistic gameplay and peak performance. Your games have never had it this good. Do great things with Windows 10

New features and functions bring new computing experiences to life with AMD Radeon graphics on the Windows® 10 platform. Take your gaming further with XBOX ONE on Windows. Play and connect with your games and friends. Everywhere. Compatible with the newest DirectX 12 Technology

Meets the standards of the newest games with the latest Direct X driver compatibility. Expand your territory and customize your field of vision. Connect up to three displays on a single GPU for dynamic, panoramic multi-screen gaming. You’ll get an expansive experience that’s truly out of sight. Made for Online Gaming Supremacy.

Take your games to a whole new level with an XFX 360 graphics card. Play with 60 or more at max settings 1080p HD the hottest online games such as StarCraft® II, League of Legends®, Dota2, Counter-Strike®: Global Offensive.

The feature-rich AMD Radeon R7 360 GPU delivers all the power you need to play the hottest online games in stunning detail along with smooth, stutter-free gameplay, thanks to AMD FreeSync technology. Maintain the highest possible frame rates while connected to FreeSync monitors without sacrificing performance. Every gamer deserves perfectly smooth, realistic gameplay and peak performance.

Built for battle, the XFX Radeon R7 360 GPU is your secret weapon for the games of today and tomorrow. Using the next-gen, super-charged graphics and compute APIs - Vulkan, DirectX® 12, OpenGL 4.4, OpenCL, Mantle - achieve consistent, peak performance across virtually all games and applications and raise the bar for a reliable and dependable GPU.

All of this without breaking the bank, making the R7 360 a tremendous value. Pros: -Good FPS on all my games pretty much -Affordable -Lifetime Warranty

Overall Review: I recently bought ark evolved which is a pretty graphic intensive game and I'm still getting around 30 FPS which is extremely good for this game considering it isn't optimized yet and still in development...The games amazing and beautiful for anyone who hasn't tried it yet My System Specs: 8 Gig DDR3 Ram AMD athlon 860k black edition XFX R7 360 GPU 500 Watt PSU

Manufacturer Response:
Thank you for the review, we really appreciate you taking the time to write it. If you have any questions, please let us know. XFX Support Mark at XFX neweggsupport@xfxforce.com
Mike T.
Ownership: 1 week to 1 month
Verified Owner
Great mid tier gaming card9/26/2015 9:52:26 AM

Pros: Card runs WoW on ultra graphics with a very occasional momentary lag. Tried the racing game that came free with it (best buy reward) and ran flawlessly. No complaints for a mid tier gaming card

Manufacturer Response:
Thank you for the review, we really appreciate you taking the time to write it. If you have any questions, please let us know. XFX Support Mark at XFX neweggsupport@xfxforce.com
Brian A.
Ownership: less than 1 day
Verified Owner
Great Card At This Price Point!9/10/2015 3:42:36 AM

Pros: Price to performance! It has better specs then a 750ti and is newer, plus supports Dx12! This is going to be my first AMD graphics card and im excited since my current graphics card is a GT 630 lol , its gonna be a huge jump in performance! The reason i went with this model of R7 360 is cuz of the fans and heatsink, iv heard AMD cards run warmer then Nvidia, i plan on over clocking this to get a lil extra performance out of it and maybe changing the thermal paste also :) btw i only play league of legends but i plan on moving on to some more intense games since il have this new card

Overall Review: Make sure you have a 6pin power connector on your PSU!

Manufacturer Response:
Thank you for the review, we really appreciate you taking the time to write it. If you have any questions, please let us know. XFX Support Mark at XFX Neweggsupport@xfxforce.com
William R.
Ownership: 1 month to 1 year
Verified Owner
what´s a gamer?11/3/2015 10:43:13 AM

Pros: Having owned it for a couple of months, I can say I would recommend it without hesitation. I was looking for a silent affordable mid range ("future proof" directx12 ready) card. I bought it when it was U$D108. Compared to Geforce GTX750Ti, which were around U$D129 (same price as today, 11/03/2015) it sounded like a very good deal. When it comes to performance, it is said to be placed between 750 an 750Ti, about 1 to 8 fps below the latter, depending on the game. Its Bonaire core comes from HD 7790 days, and also present on R7 260 (non X) cards. Nevertheless, this one has dx12 features, besides having matured dx11 drivers. I´ve played console/PC all my life, but I´m not "a gamer"...(as if it we were talking of some kind of sub-culture here). Since I´m not "a gamer": 1) I feel no shame in lowering settings to reach a 60fps performance. And 2) spending more than U$D150,170 on a video card, is close to obscene to me. Moreover, the type of games I really enjoy are generally those in which its main attractive are not graphics (let`s say, Xcom, for instance). But don´t get me wrong, this card delivers. Haven´t had much time to try it so far, but tried Mad Max, which defaulted to high settings at 1080, delivering around 50fps with ocasionals drops up to 40fps. New Starwars Battlefront beta resulted in very similar numbers. Not to mention if you play in native lower resolution monitors. Older titles (2013 and so) like Lost Planet 3, can completely be maxed out, never dropping below 60fps. This card is more powerful that any current console gpu so you`re good to go with any port you`re planning to play. A big deal to me is fan noise. I liked the Idea of dual fan here. The card is in fact quiet, once you install its drivers, otherwise fans will rotate to full speed (which is not loud at all, but undoubtely audible). Dual fan also results in the card being quite "fresh". It idles at about 26 ºC reaching 50ºC when gaming. I´ve seen tooping at 62º in Mad Max all maxed out, never above that. If you have an "ageing" Am3 Phenom II x4 945 like me (won´t switch till Zen), I tell you these two make a good team. CPU usage is never above 80% while gaming. All in all, if you "casually game" then this a card to seriously consider.

Cons: No way to adjust fan speed when running with open source drivers on a gnu/linux distro. You are forced to install the propietary ones if you want a quiet operation (yes, I´ve tried lm-sensors+fancontrol without success). This is more of an O.S lack though.

Manufacturer Response:
Thank you for the review, we really appreciate you taking the time to write it. If you have any questions, please let us know. XFX Support Mark at XFX neweggsupport@xfxforce.com
Alex M.
Ownership: 1 month to 1 year
Verified Owner
Decent Performance for 2016, Fans get noticeable at 60C , (40% load at 1050MHZ)11/15/2016 2:28:35 PM

Pros: Fast and easy install. Decent performance to replace my failed Intel HD 530. Supports using multiple VMs all at once quietly. Runs starcraft on medium-high settings without the fan being too loud. External Metal plating looks sleek, and has a nice bold colour to it.

Cons: This card is the loudest item in my PC. (That said, I have a very silent CPU fan [evo 212], and have the case fans disabled; but this card definitely adds sound to my build.)

Overall Review: I read the RX 460 is more energy efficient, so it probably runs quieter, while having slightly better performance than this card. I would suggest people check out the RX 460 which just came out , before considering to buy this old card.

Pros: It isn't the most powerful card on the planet but for a low to mid range card it kicks ass! I've had this card for quite a while and it hasn't given me any issues whatsoever I currently have the gpu OC'd to 1180 MHz and a memory overclock of 1900 MHz and at max load it sits at around 70c with the fans at 30-35% and with this oc almost all of my games run at 60 fps solid with the exception of GTA V and doom and there still fine at around 45-50 fps all and all I am very pleased with this purchase and if your a pc gamer on a budget I highly suggest this card.

Manufacturer Response:
Thank you for the review, we really appreciate you taking the time to write it. If you have any questions, please let us know. XFX Support Mark at XFX Neweggsupport@xfxforce.com
James E.
Ownership: 1 week to 1 month
Verified Owner
great card for price however9/22/2016 9:59:46 PM

Pros: another really good card from xfx. bought this to replace twin xfx radeon hd 7770's that ran for years (still running, just wanted to upgrade). i'm not a gamer so this has plenty of power for my needs.

Cons: LOUD and hot. runs between 15 and 20 degrees fahrenheit hotter than my 7770's did and this single card is way louder than the two it replaced. as stated, i'm not a gamer, this card is never under a heavy load so it gets way to hot in my opinion.

Overall Review: it is a great card for the price but be prepared for higher temps, like nerve rackingly higher temps.

Pros: It works great for many games, but will obviously heat up if you don't have proper ventilation. I had amazing ventilation. Temperature levels were kept down and managed to stay down. Great performance, but if you have the capacity to upgrade, do it.

Cons: However,after the one month I had this card it just stopped. I mean literally. PC turned off. Tried everything, the fans wouldn't turn and I'd get nothing. Been trying to get a claim on my warranty but nothing so far.