OUT OF STOCK
Sold by: Newegg
Shipped by Newegg
Price Alert
Add To Wish ListFound on 10 wish lists 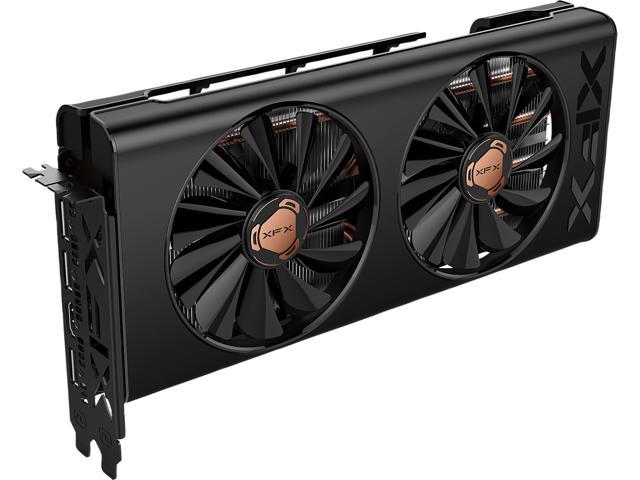 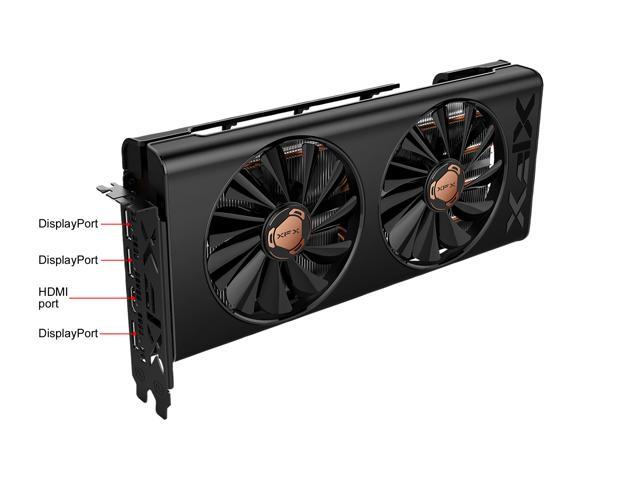 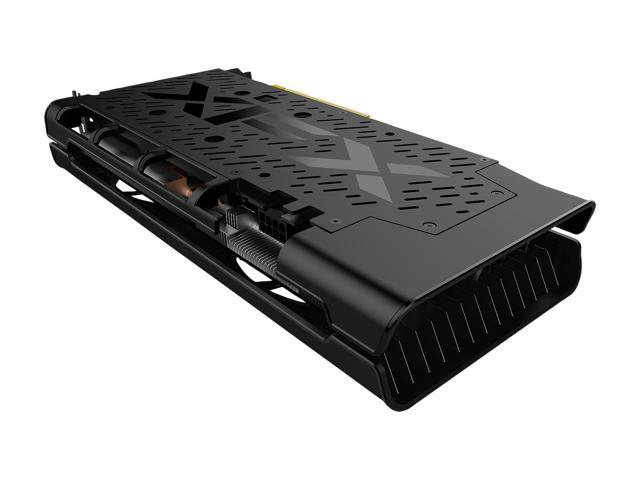 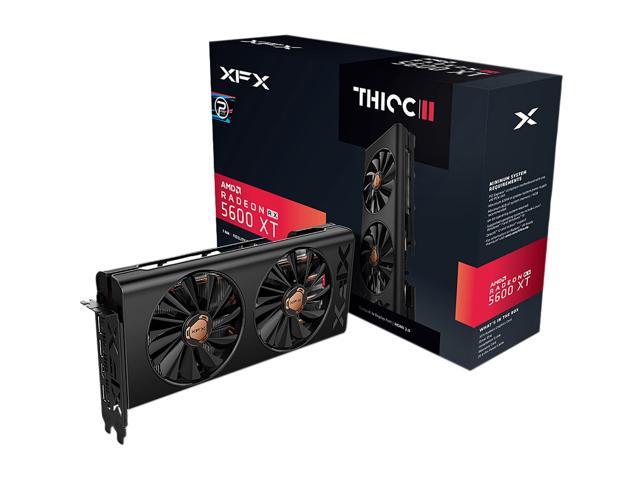 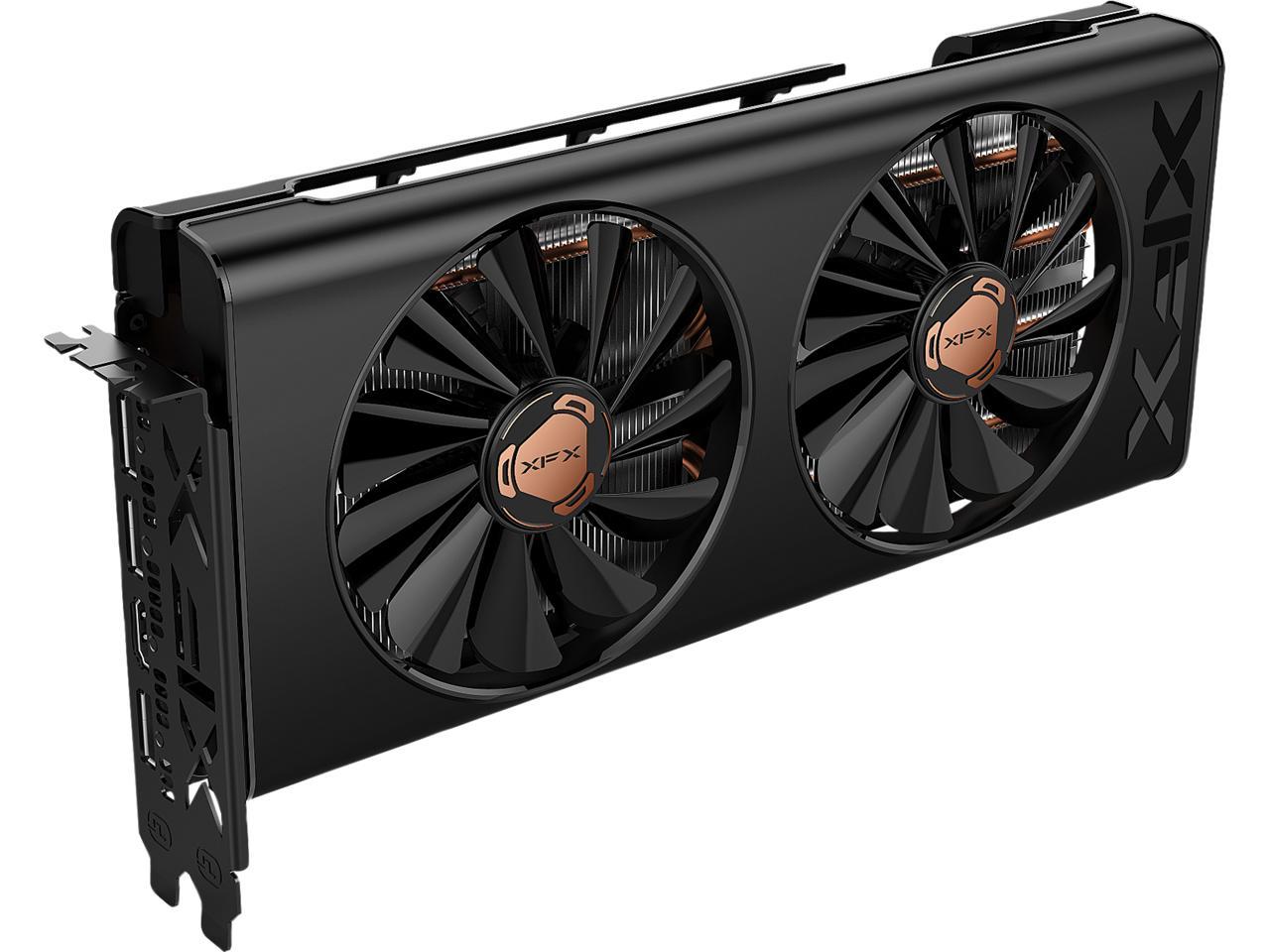 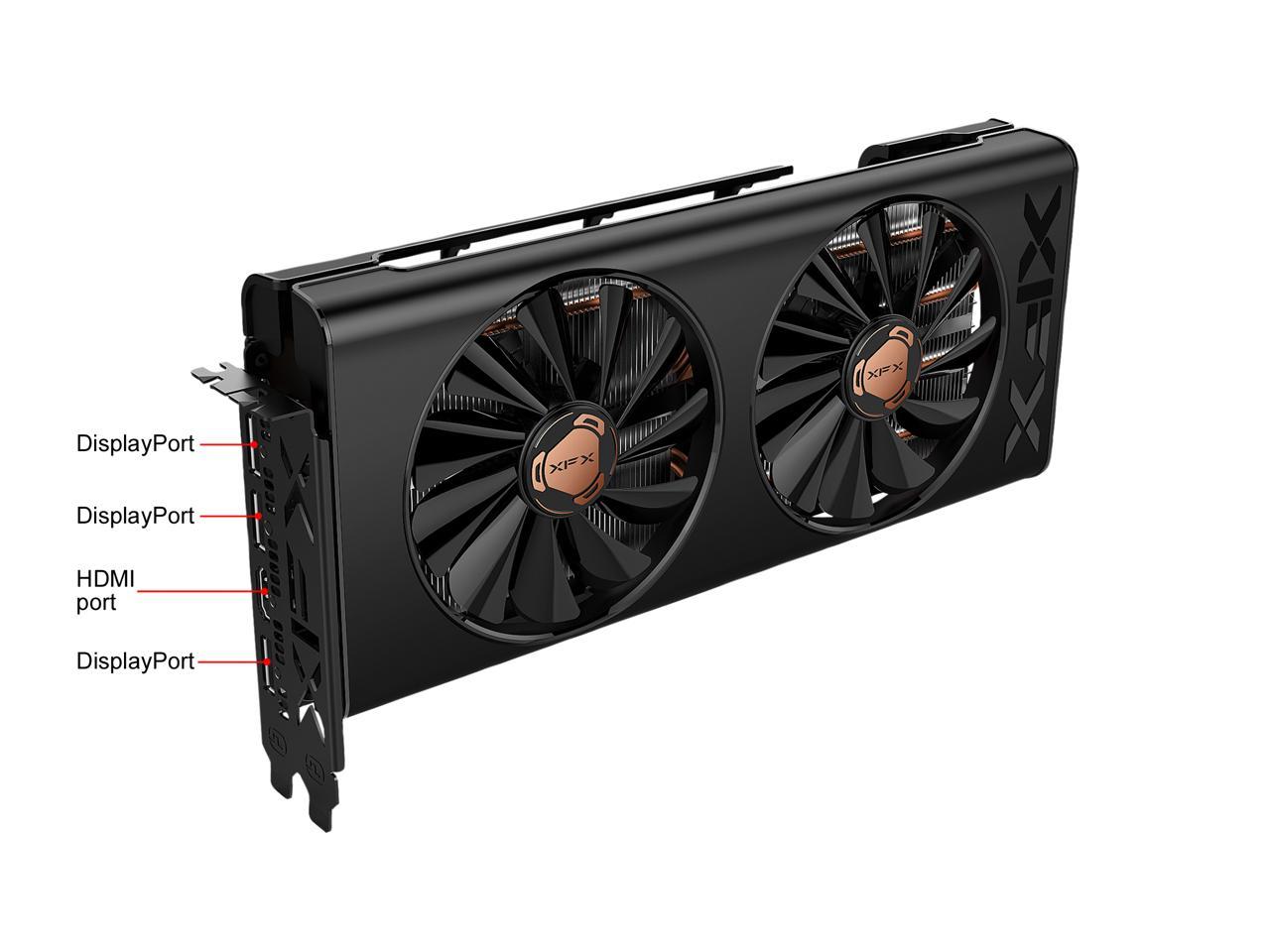 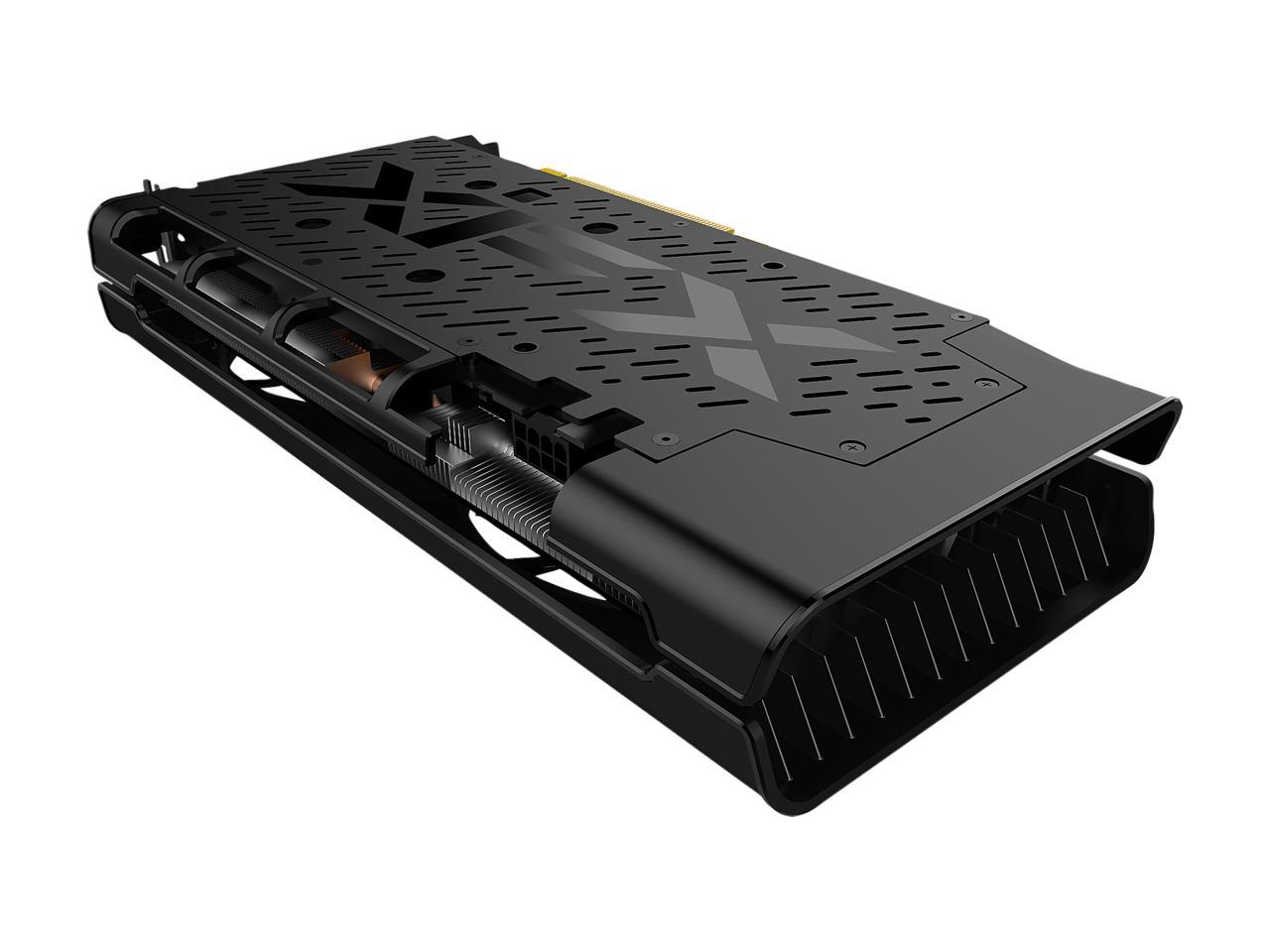 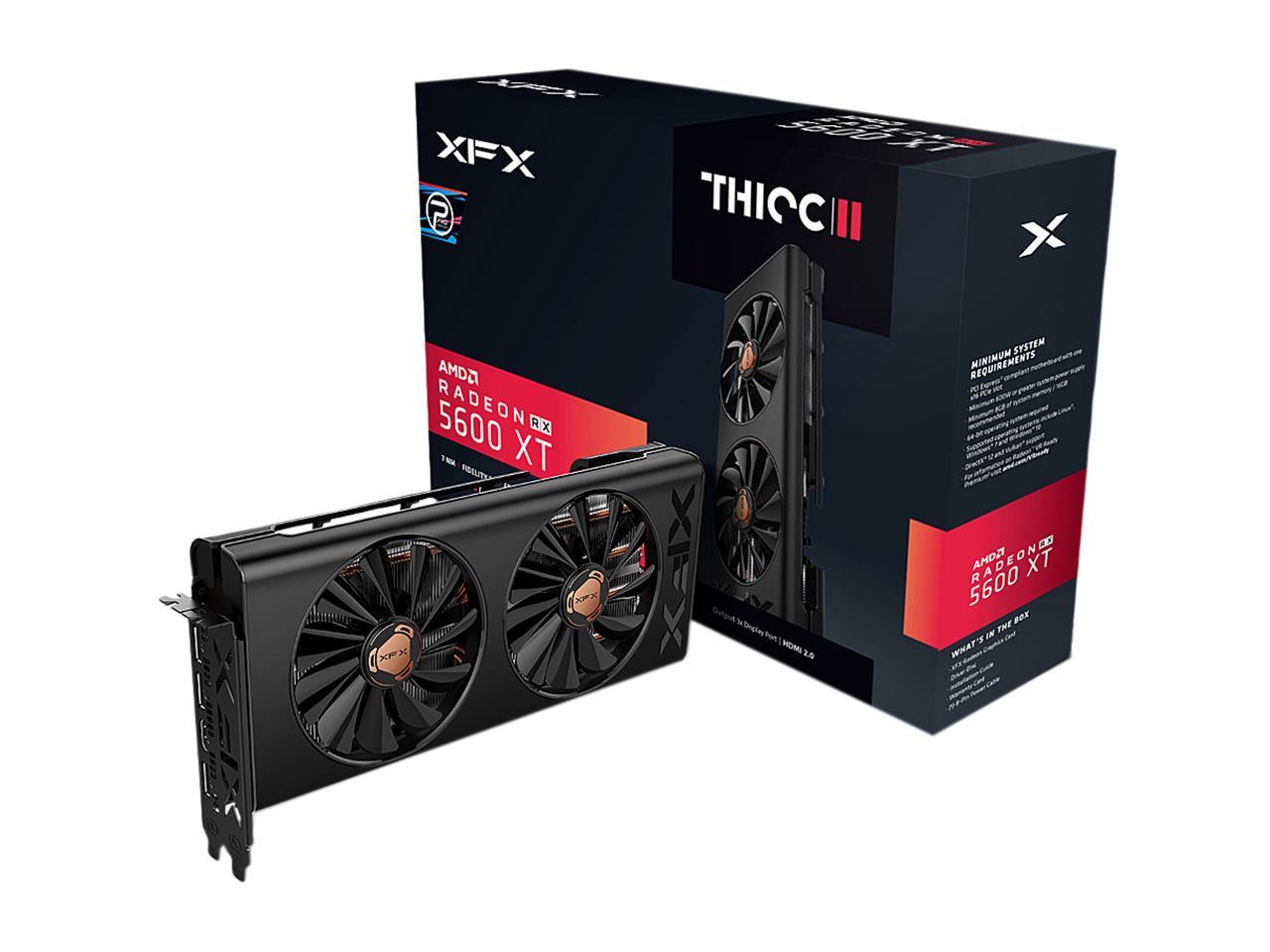 When you don’t want to settle for the baseline and want the most optimal performance achievable for the series, then the XFX Pro Series is the perfect choice. With a combination of engineered thermal dynamics and efficient airflow, the Pro Series gives you higher performance than the standard for the edge you need over the competition.

The XFX RX 5600 XT is built for high-performance and high resolution gameplay. Experience smooth gameplay performance at 1080p. With support for 8k you are ready for Next-Gen displays. See everything in mind blowing detail without sacrificing performance. Radeon Boost delivers added performance and fluidity during fast motion via mouse input is detected, dynamically lowering resolution of the entire frame to allow for higher FPS with little perceived impact to quality.

Play classic games and relive the retro experience by scaling on-screen images from one pixel to four pixels (or more) to deliver a retro-like visual gaming experience. Radeon GPUs with the Radeon architecture support HDMI® 2.0b and DisplayPort 1.4 w/ DSC for compatibility with a new generation of monitors that would make any gamer excited: AMD Radeon Software Adrenalin 2020 Edition gives you more control over your gaming experiences. The software's intuitive interface enables players to stream, share and tweak graphics settings in real-time without missing a second of the action or compromising in-game performance.

Learn more about the XFX RX-56XT6DF46

Pros: I don’t hear it, responsive, software seems robust with features. Playing on 1440p and getting a smooth 200+ FPS

Cons: I don’t play much overwatch but it had a lot of flickering at the start of any match until the latest 4/2020 drivers. With the latest drivers I had one issue with overwatch displaying a black screen and having to close the game.

Overall Review: Happy with the purchase. Only had a few occasions all with overwatch with inconsistencies.

4 out of 4 people found this review helpful. Did you?
Manufacturer Response:
Thank you for the review! We're happy you are pleased with your new product. If you have any questions moving forward, please contact us at xfxforce.com. XFX Support
Pail T.
Ownership: 1 week to 1 month
Verified Owner
Great GPU5/25/2020 12:01:13 PM

Cons: The PCIE blank leaves a gap with this and my case. I don't know if its the card or the case but overall no big deal with positive case pressure

2 out of 2 people found this review helpful. Did you?
Manufacturer Response:
Thank you for the review! We're happy you are pleased with your new product. If you have any questions moving forward, please contact us at xfxforce.com. XFX Support
Ian B
Ownership: 1 month to 1 year
Verified Owner
Easy to use and delivers results.8/6/2020 11:02:28 AM

Pros: Easy set up and install, software works well with card and is easily configurable

Overall Review: I bought this card as a budget GPU for my first build. It had the right price and works well in 1440P offering good cooling stats (most games set at ultra settings at 1440 temps only get to 60-65C which isn’t bad in the case that I have it in. I also like the matte black look as it compliments my overall theme. I would recommend and consider buying again. Overall Review: It had a odd bug where is the computer ever goes into sleep mode or turns of the monitor to save power you can wake it back up. even if you reboot the computer the card turns the monitor off the only way to recover is to go into window safe mode and uninstall the device and driver then reinstall after rebooting to normal windows. at some point this will probably be fixed in driver updates.

1 out of 1 people found this review helpful. Did you?
Manufacturer Response:
Thank you for the review! We're happy you are pleased with your new product. If you have any questions moving forward, please contact us at xfxforce.com. XFX Support
Anonymous
Ownership: 1 month to 1 year
Verified Owner
Amazing Upgrade9/20/2020 5:16:54 PM

Overall Review: This was my first graphics card upgrade, coming from a gtx 1060 3gb this card is such amazing performance. I know people like to bash on amd about drivers but this card worked amazingly out of the box, I dont even have a very good cpu but this card just cradled it and does all the work. its also very quiet . best upgrade ever.

Overall Review: Product as described. No issues whatsoever. Fast card and great value for the price.

Cons: - None that I've discovered yet - On the larger side, but fit fine.

Overall Review: - Great product with no issues; I'd recommend it again. Purchased for my first tower

Pros: - A quiet card that maintains reasonable temperatures even under load -Runs 1080 above 60 FPS in almost any circumstance with settings set to high or above -Though a large card it is a rigid card that does not require any support

Cons: -There is no indication whether the card shipped in quiet or performance mode and nothing indicated in the manual. Without a bit of searching with Google I wouldn't have known that it arrived in quiet bios mode. -Though a problem on AMD GPUs, the orientation of the 8-pin power connector makes cable management a little more sloppy. -Also an AMD GPU issue, the default fan curve doesn't cool as well as it should at heavy load as it's more concerned about how loud the fans are instead of how cool the GPU is. I don't mind if the fans are a little loud if it keeps the GPU under 80'C.

Overall Review: I would, and have, recommend this card to others. It performs well and cools sufficiently as long as it's not pushed much beyond the stock "performance bios" settings. Because of an issue that was eventually discovered to be a APC UPS issue I had to contact the technical support department at XFX. I found them to be quick to respond and willing to help diagnose the issue. The were pleasant, and never condescending, and followed trough until the problem was resolved. This alone is enough for me to purchase another XFX card in the future.