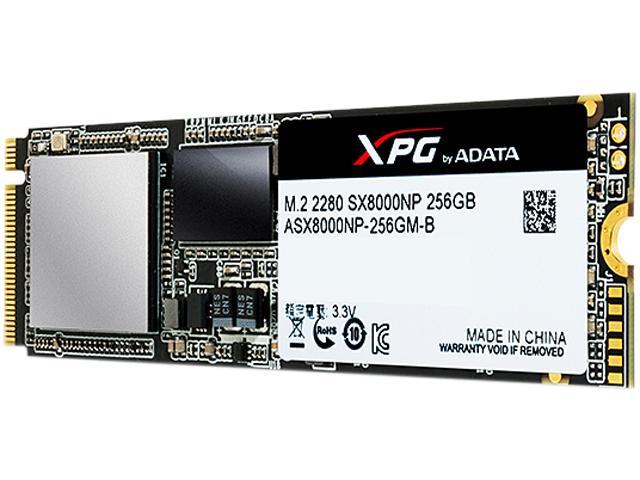 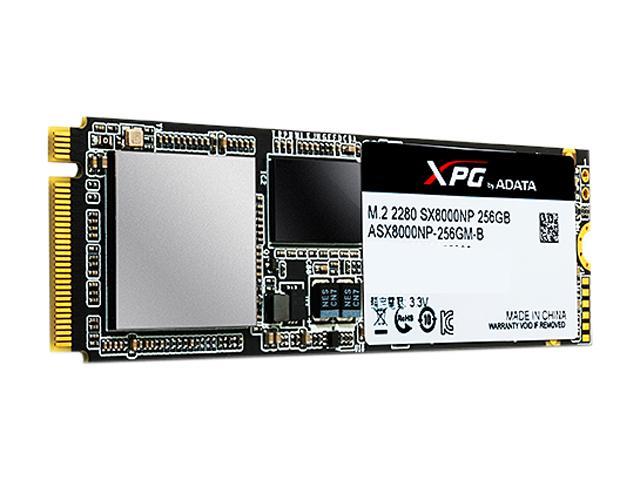 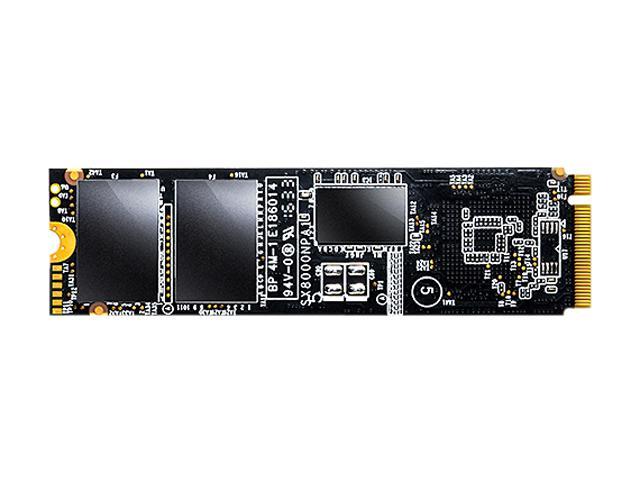 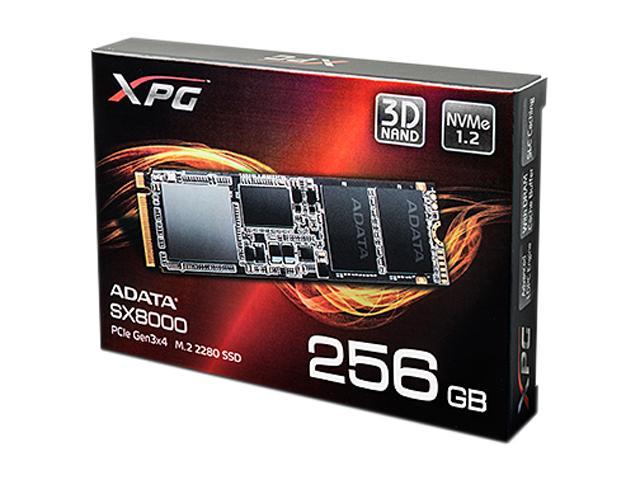 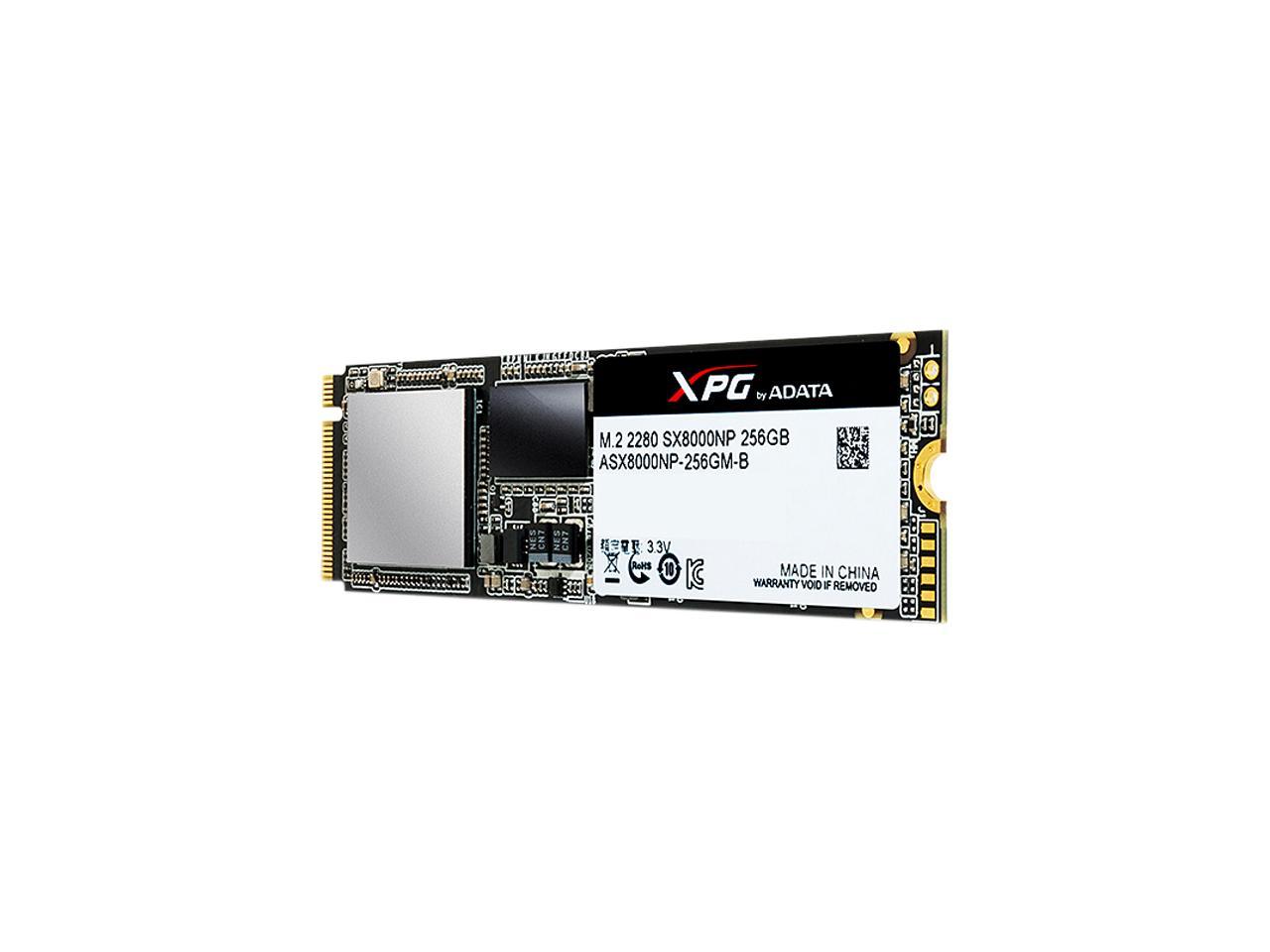 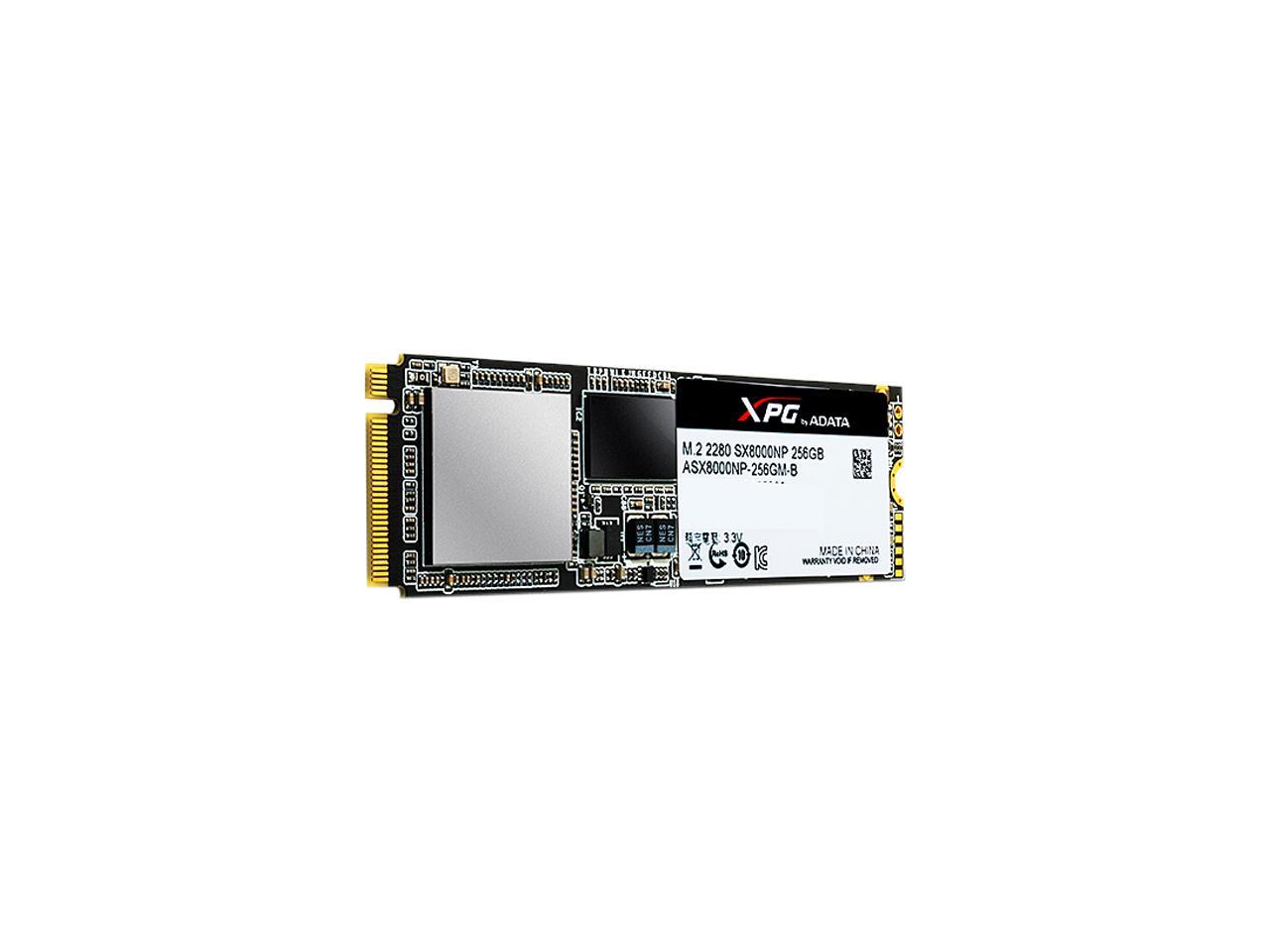 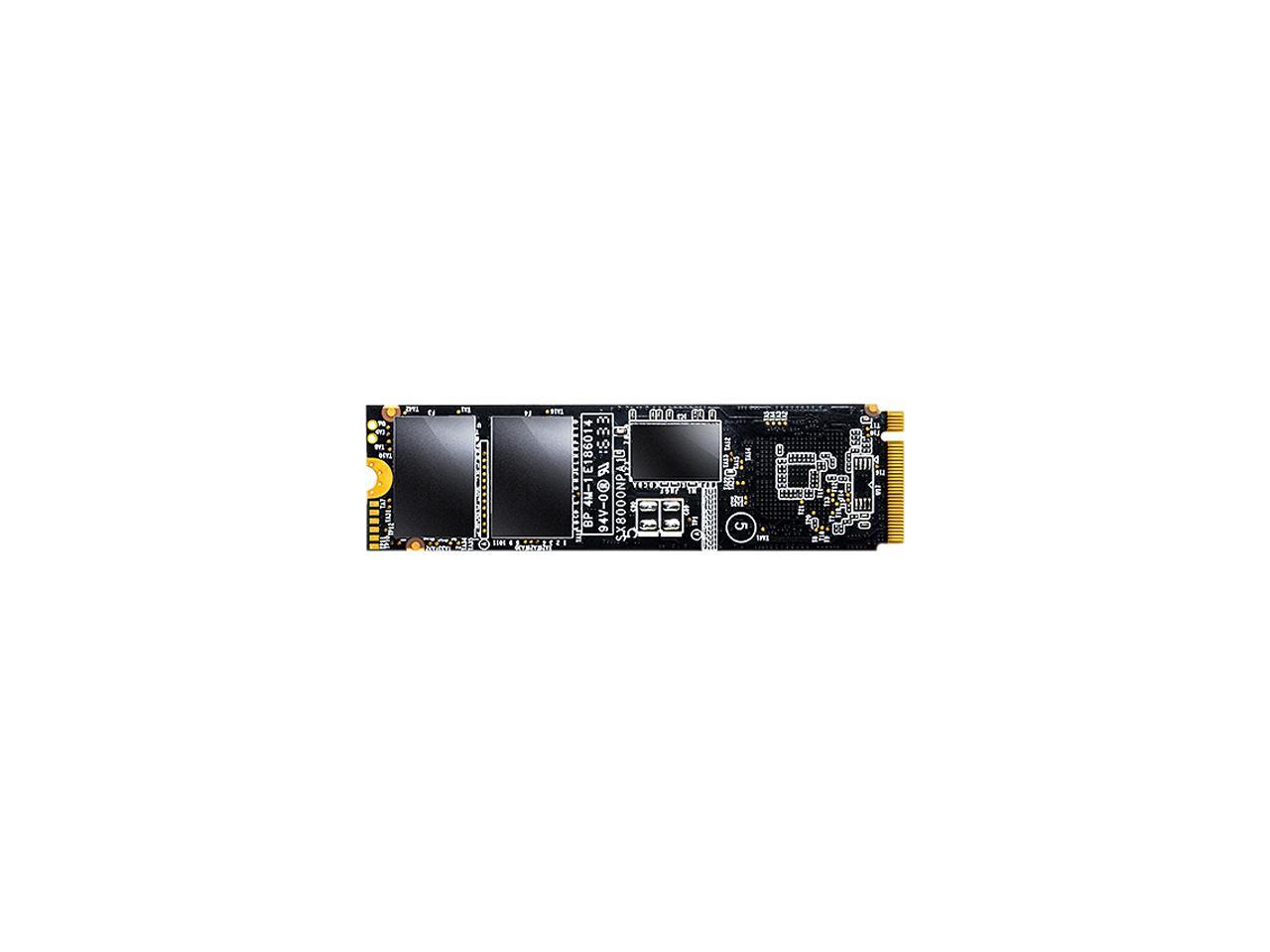 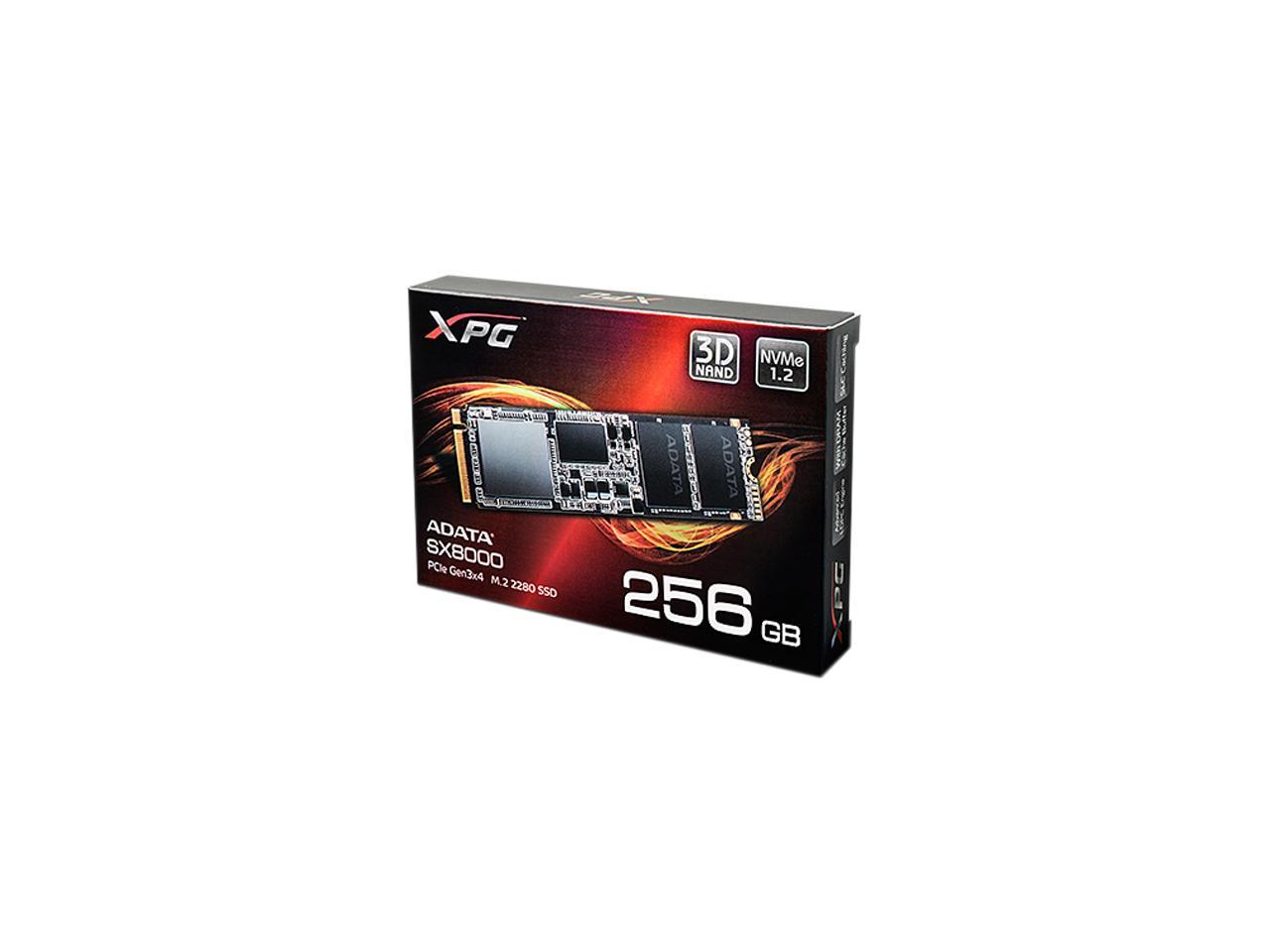 (21) Write a Review
OUT OF STOCK.
Allow 2-3 days to ship.
Overview
Specs
Reviews

Designed for gaming, overclocking, and graphics rendering, the SX8000 is perfect for applications that rely on superior storage performance. It is an ideal solution for high-end systems, leveraging the super-fast PCIe Gen3x4 interface to provide stunning read/write speeds up to 2500/1100MB per second*. This is nearly four times faster than SATA 6Gb/s for read and over twice faster for write. The compact M.2 2280 form factor means users can easily install the SX8000 in gaming notebooks and desktop PCs with no messy cables or dedicated power leads. The SX8000 supports the latest Intel platforms, helping gamers and overclockers get the most out of their systems. Thanks to the flexibility of 3D NAND, the SX8000 M.2 2280 SSD comes in available in diverse capacities, ranging from 128GB to 1TB while keeping its compact form factor. Moreover, 3D NAND outperforms 2D NAND and offers higher efficiency and reliability. All SX8000 models provide high TBW (Total Bytes Written), meaning the number of times an SSD can write its entire capacity in one lifespan. The SX8000 has a TBW rating that outranks comparable models, indicating a longer-lasting SSD. Intelligent SLC Caching allows NAND Flash memory to operate in single-level cell mode and boosts read/write performance. In addition, with support for DRAM Cache Buffer, read/write performance can be as much as double that of solid state drives that lack a DRAM cache, or in other words that can't use system memory as an SSD buffer for high intensity tasks. LDPC (low density parity check) error correcting code has been implemented on the SX8000, leading to a massive reduction in data errors and an equal increase in data integrity. It protects your valuable content against corruption to a much greater extent than non-ECC SSDs or even SSDs that use basic BCH error correction. In addition, the SX8000 has a program/erase cycle three times longer than standard SSDs due to incorporating native hard and soft decode. Together, these ensure improved durability and a longer SSD lifespan. By supporting RAID Engine and Data Shaping, the SX8000 ensures data integrity and delivers extended SSD lifespan for better, longer-lasting stability and return on investment. You get an SSD able to fine-tune workload and stress balancing while easily integrating in storage arrays with a high degree of protection and privacy assurance. The SX8000 SSD is available in two unique flavors. The original release and a just-added version with a custom heatsink bearing the cool XPG logo and distinctive design. Both deliver breathtaking performance via PCIe Gen 3 x4 in M.2 2280, and together allow more creativity for your desktop or notebook builds. Note: *Performance may vary based on SSD capacity, host hardware and software, operating system, and other system variables.

Pros: AS Benchmark shows sequential 1410.70 read and 988.05 write, higher than advertised. Temps aren't too bad for an nvme drive, I have it in an ASRock Deskmini 110 that only has the intel stock cooler fan with ventilation (usually in mid 40's and up to 60 when benchmarking) 5 year warranty if you register

Cons: None really, didn't come with a screw but unsure if that's up to the mb manufacturer or the drive manufacturer.

Overall Review: For the price I paid (not any more than a sata based drive), it was a no brainer

Pros: CHEAP. It is tiny, and it does in fact work. I knew I was getting something that was lacking support/drivers from manufacturer. After about a month of ownership, and benchmarks aside, the performance is acceptable for my needs. I don't write much to this drive, but the write speeds are terrible, and the read speeds, although better than SATA III SSD's, are a slower than advertised (800-900 tops mb/s). CHEAP.

Cons: I don't write much to this drive, but the write speeds are terrible, and the read speeds, although better than SATA III SSD's, are a slower than advertised (800-900 tops mb/s). Runs HOT: Small heatsink goes a long way. (23C lower with small adhesive sink) The lack of support is disturbing. They have their SSD toolbox software, and driver/firmware support for their SSD's, but nothing for these NVMe Drives yet. I was ignored when I inquired, but they sent me a customer satisfaction survey for the support I never received, which also asked me to rate their software that does not support my device. Useless. Don't expect the Acronis 2015 they let you use will recognize an NVMe, 2017, or fresh install recommended.

Overall Review: Meh. I would like some support. And I like to at least have a tool that works to keep an eye on the drive. If they release a new SSD Toolbox with NVMe Support, it would be nice to see how this drive is performing. I bought it because of the price, I am not disappointed, nor offended, but meh, it is certainly nothing special, and the speeds they claim are maybe peak speeds, but certainly not a reflection of sustained/average read and write speeds.

Pros: Very easy install, Windows 10 Pro recognized it immediately. Win 10 loads in about 10 seconds from hitting the power button! So far no problems and a 5 year warranty! Running on EVGA Z170 Classified K.

Overall Review: While not the fastest, for the price point well worth the money! ADATA makes a great product with this one!

Pros: This drive is very fast boot times are very short. The important thing is to make sure you set bios to UEFI . On my board install was very simple, I was doing a new win 10 install so all I had installed was this drive and my bios saw the drive and installed to it no problem. The board is MSI Z170 SLI Plus. Overall fantastic drive.

Cons: To Me no cons at all.

Overall Review: I would recommend to anyone for boot drive.

Pros: I decided to go full mini itx and upgraded to a new Asrock mobo with the m.2 slot on front for this thing. System is very responsive, boots up and shuts down very fast. I got the 256gb version for installs then just used a USB 3.0 128gb drive for my data storage. Works great for a mini system with less wires from the psu and mobo for drives when everything is directly attached to the mobo and provides for a very clean look. I don't have exact numbers to put up for you, but I've been using ssd's for my system and install drive for several years now and a quick few tests verifies the speeds are as rated. The differences between this nvme and standard sata ssd's surely isn't the night and day difference it was from hdd's to ssd's, but your system will feel snappier and programs will load a little faster. Haven't had any overheating issues as I have a 140mm fan blowing air across the mobo, but glad it has the mount on top instead of on the backside.

Overall Review: I would absolutely recommend this ssd, just wish I got the 512mb version as I'm wanting to install lots of stuff and try it out because it loads so stinking fast. Main reason for getting this drive was that I wanted to reduce cable clutter in my system, this allowed me to remove sata cables and sata power from the psu, looks very sleek inside my system now. I could've gotten a regular sata ssd, but this nvme was just a little bit more and figured I'd spend the extra for a little speed boost. Very happy with the performance!

Overall Review: This was a cheap ($62) way to try out the M.2 PCIe form factor. I had Windows 10 installed on a SATA III SSD before, and moving to this was a modest improvement in load time. I've read that larger capacity M.2s are faster than small ones, so maybe a larger M.2 would provide even quicker load times, but that is unknown for me at this point. Overall I'm happy and would gladly buy this again for an OS. I was surprised how small it was, even though the physical size is right in the title (22mm x 80mm). Perhaps I'm not quite accustomed to the metric system yet.

Pros: Works as it should with no problems very speedy . (May 9 2017 update) still going strong.. i have a Coolermaster 932 haf case from 2012 i never used the side 200mm fan until now and it's in a perfect spot for cooling the Nvme m.2 Adata XPG SX8000, my temps dropped 8-12 degrees with the side fan running.... know doubt the new cases look great with the side glass and all but " no side fan" blowing on the m.2 being they run so hot at times...lucky me.

Cons: none so for just wish i could've afforded a larger capacity drive

Overall Review: i look at the drive before i installed it the paper w/the serial # is upside down, i just peeled it off and flipped it the other way so it would look more uniform, i have windows 10 pro x 64 ...i had to Disk Mang. to initialize and label the drive after that it was ready to install Games as i did and it is faster with low thermals.

Pros: Read and Write speeds are faster than advertised. Works excellent with my new AM4 X370 motherboard For an NVME drive it is not too expensive Great for gaming Connected directly to my R7 1700

Cons: Could be cheaper Uses 3 cell NAND chips It is only 256GB No heat sink, temps sit at 60 C

Overall Review: This is hands down one of the best NVME drives on the market. It may not be as fast as the Samsung 960 PRO but keeps up with the EVO. Having said that unless you are consistently running benchmarks you would not notice the difference anyway. The reason I went with AData is I have SSDS from them and they have never let me down. I installed Total War Warhammer to this drive, I used to get 43 FPS with the game installed on my SSD. Now I get an average of 52 FPS and some scenes go as high as 90 FPS. Programs install super fast and load super fast as well.