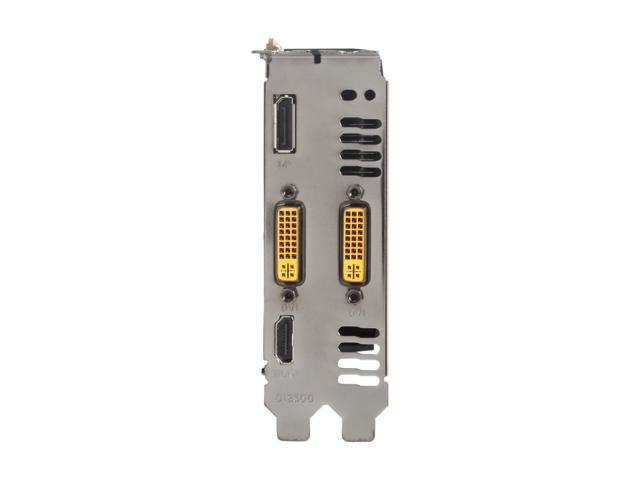 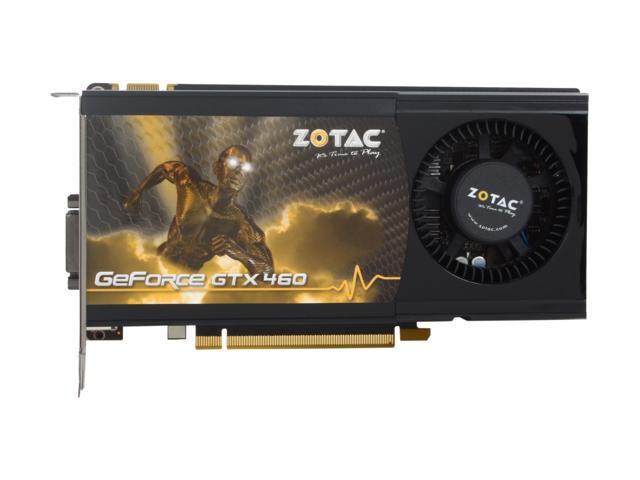 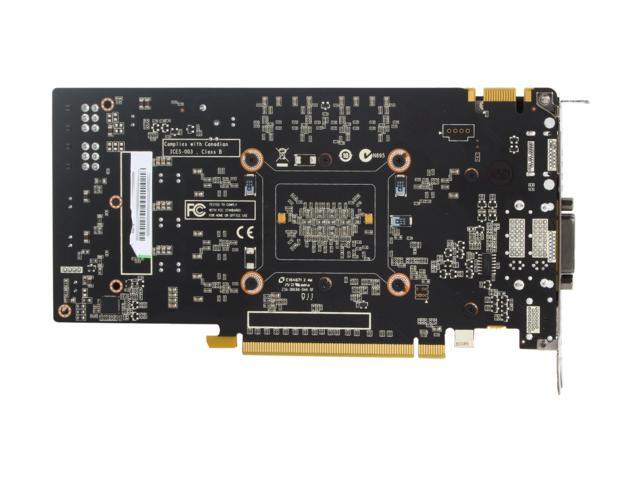 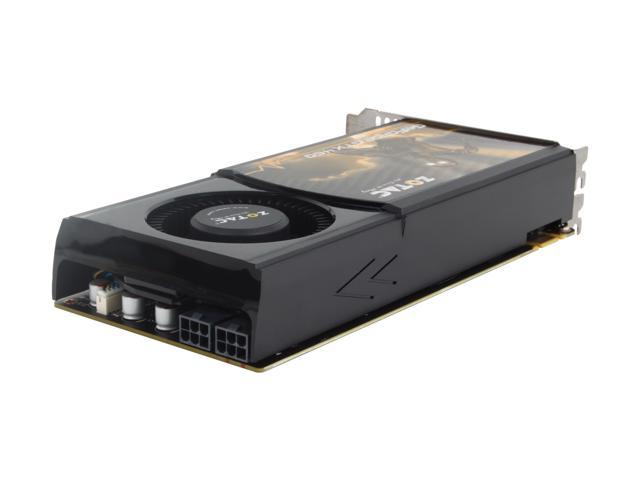 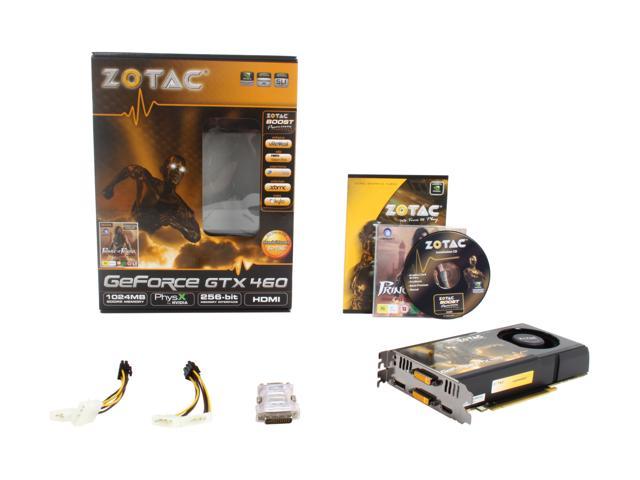 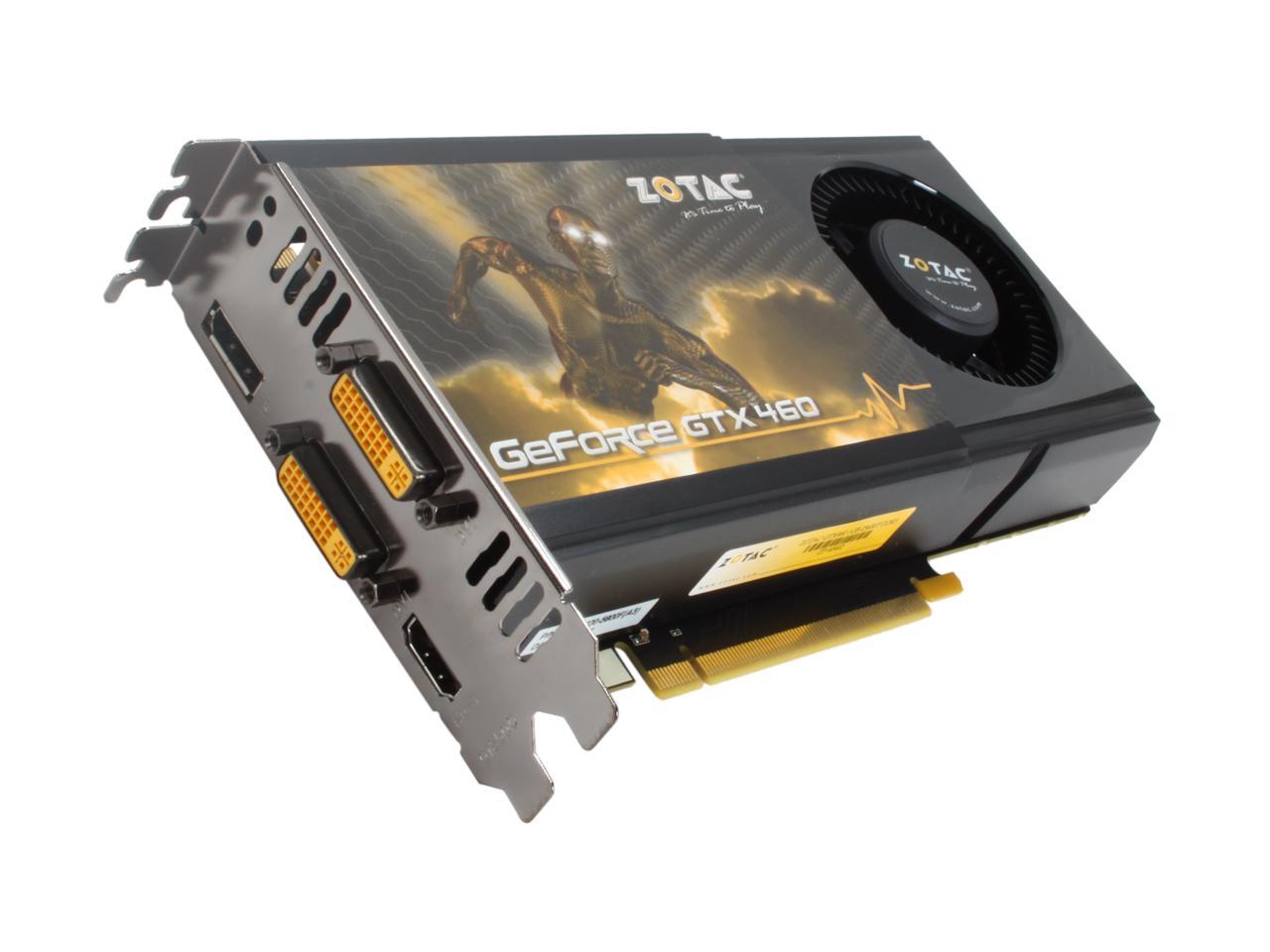 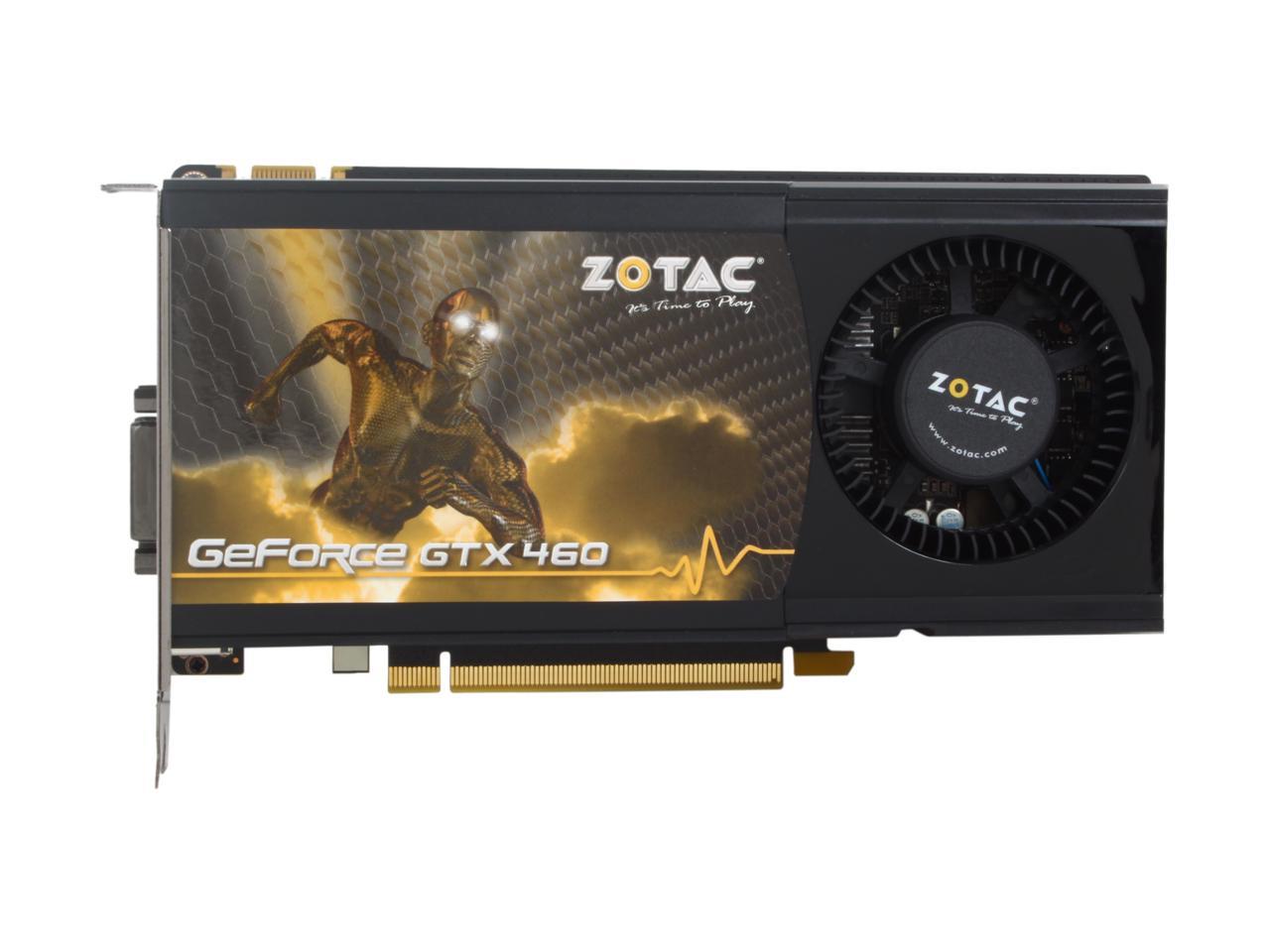 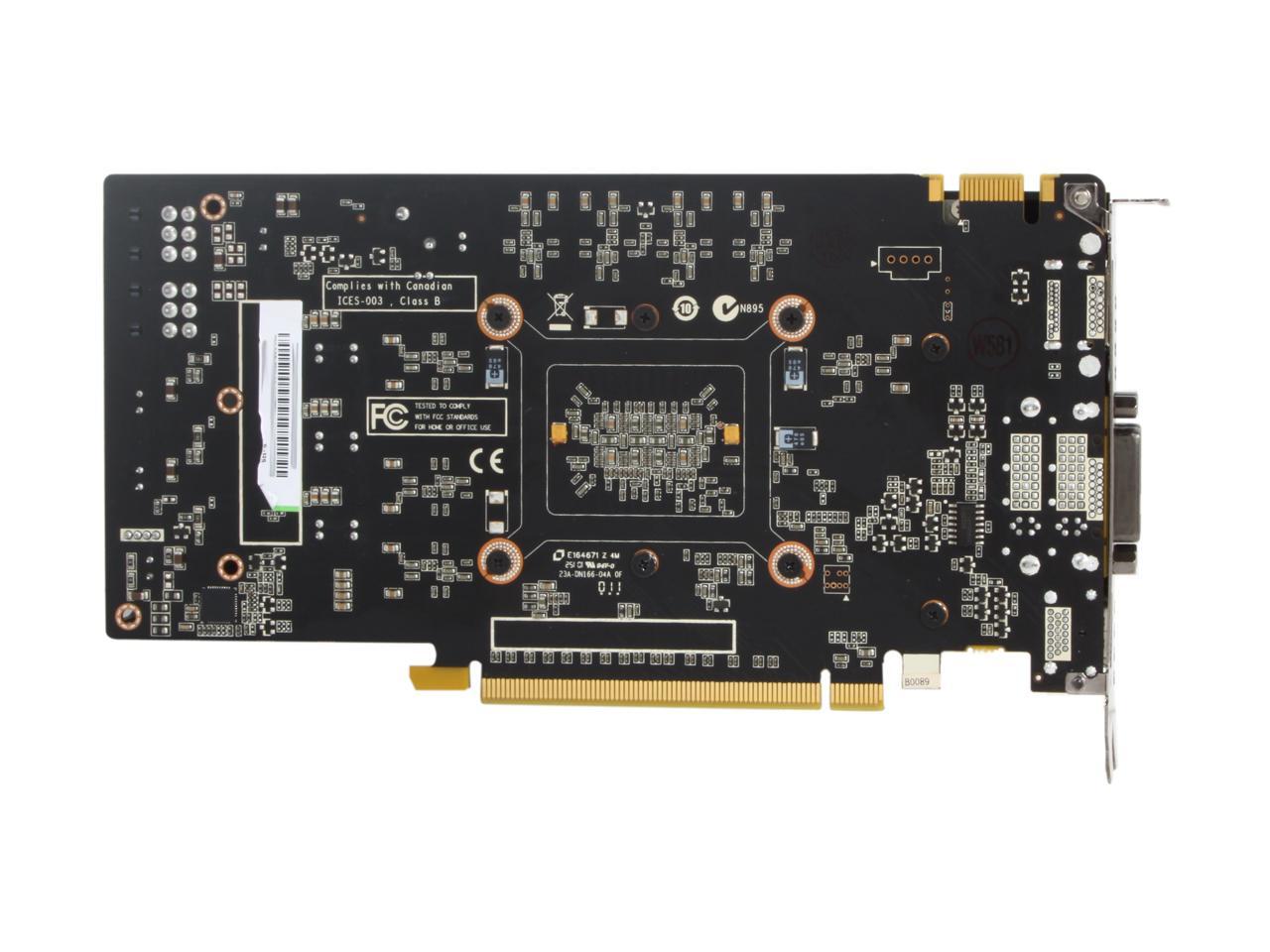 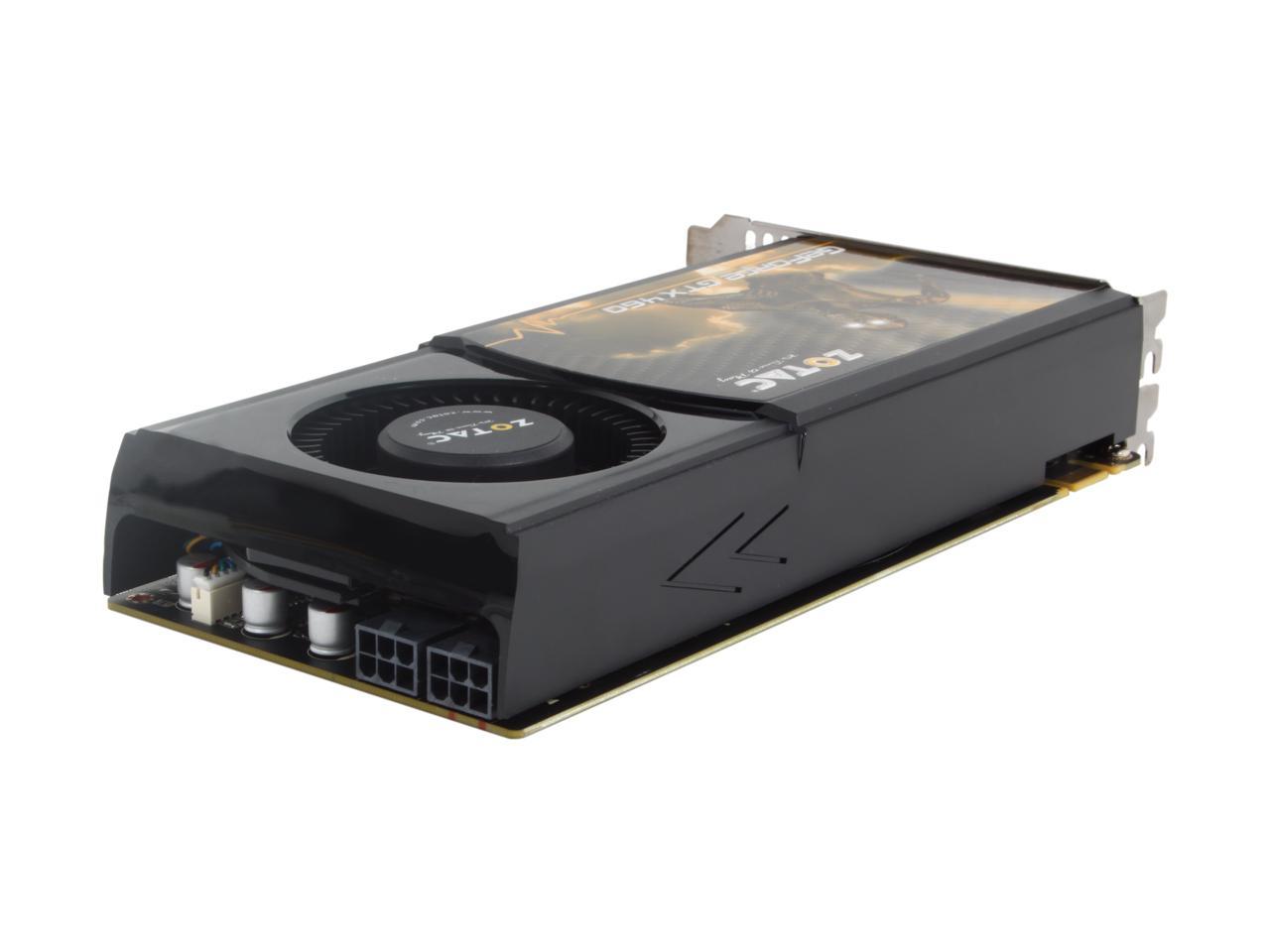 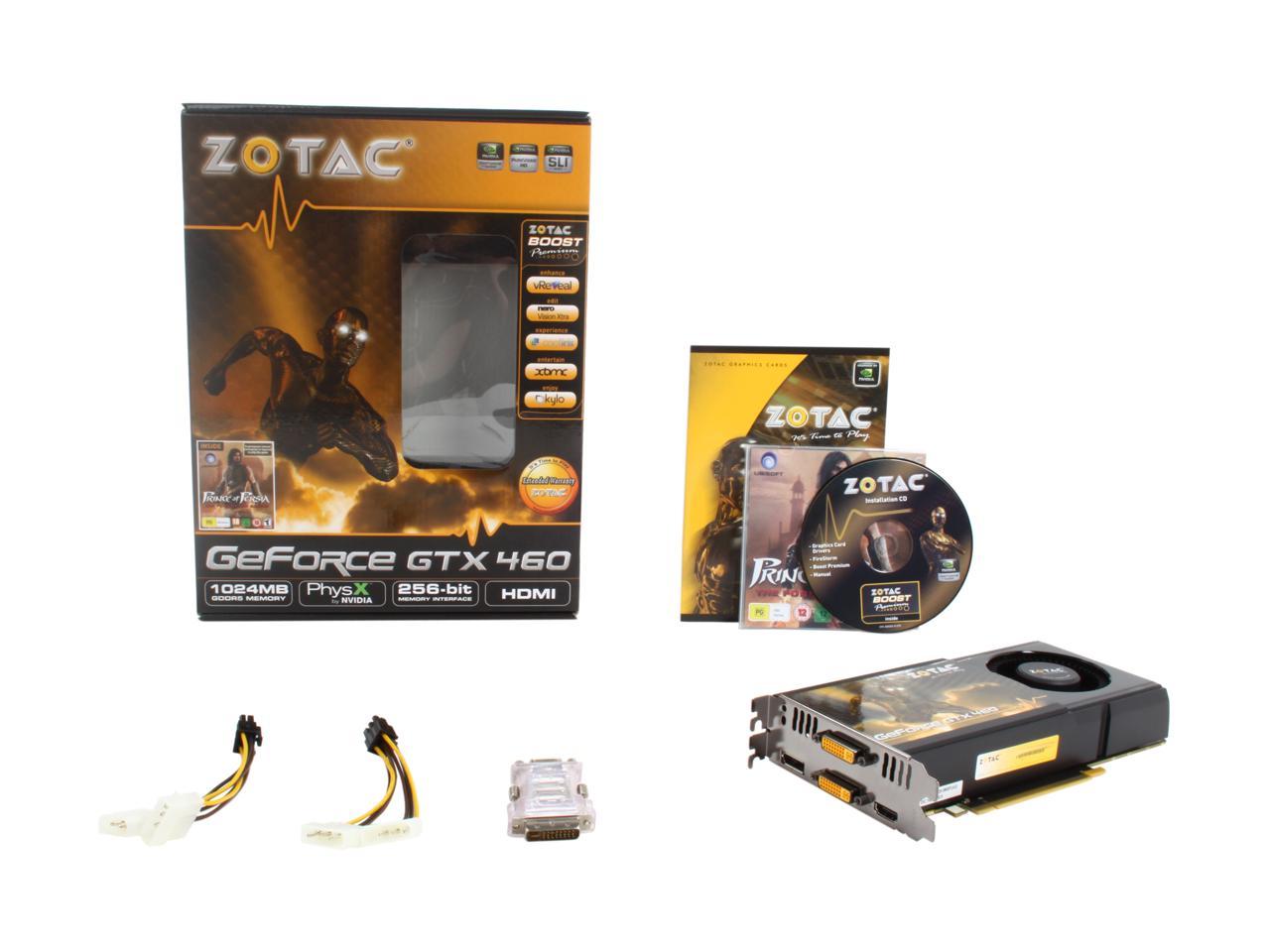 (57) Write a Review
OUT OF STOCK.
Overview
Specs
Reviews
Tailor made to hit the gamers’ sweet spot, NVIDIA GeForce GTX 460 delivers revolutionary levels of price/performance. With up to 4x the DirectX 11 tessellation performance of the competition, GeForce GTX 460 packs highly detailed visuals into your games - without sacrificing high frame rates. And with NVIDIA 3D Vision, PhysX, and CUDA technologies, GeForce GTX 460 powers all the incredibly realistic effects that your games can throw its way.
Unlike generic GeForce GTX 460, this ZOTAC GeForce GTX 460 (ZT-40402-10P) comes with more comprehensive interfaces, including two dual-link DVI, one HDMI and one DisplayPort.

Cons: I don't have another PCI-E slot in my computer to run it in SLI :(

Overall Review: At first I was a little disappointed that it didn't blow away my GTX 275. but then I found out that this particular "Fermi" chip overclocks well. Using the MSI Afterburner the stock clock showed as 675Mhz, I was able to overclock it to 825Mhz. I then played a 3 hour session of StarCraft II, FULL quality settings @ 1680x1050 / 55-60FPS solid. No crashes or graphics artifacting. I did not have AA on, but who needs that at those resolutions?

Pros: Cards performed well, games ran pretty smoothly (Crysis still would not run smoothly on my machine at maximum settings at 1920 x 1200 resolution). Lots of connectors - although I really only needed and use DVI, having the HDMI and DisplayPort would be handy if they ever made nice S-PVA or S-IPS monitors with HDMI ports - mostly just TN panels and I won't use those.

Cons: The design of these cards is flawed, I did not know this before I bought mine but their design deviates from the reference GTX 460 design and this makes these cards run very hot and loud. In tests, these are the loudest and hottest GTX 460 cards made. One of the DVI ports blocks part of the vent and the fan design does not dissipate heat very well. I had two of these in SLI and the top card ran a good 6º C hotter than the bottom card. I had two GTX 260's in SLI and their max temps were 74º C running Furmark. I ran Furmark on these cards and walked away for five minutes, when I came back the top card was at 98º C and the bottom card was at 92º C - and the safety threshold on the GTX 460's is 105º C. The fans were on, but due to some design flaw they only go up to 70% - and that really is not maximum speed, but they will not go past 70%. They fluctuated under load and occasionally the RPMs went higher, it's a software fluke and drivers did not fix it.

Overall Review: I bought these for the price, and Zotac offers a lifetime warranty. Unfortunately I'd strongly recommend avoiding this card in particular. After I made custom fan profiles for my cards I would get regular load temps in games of 84º C on the top card and 80º C on the bottom one. Additional cooling changed nothing (And I have several 120mm fans that were running at max speed to cool these off - just to get the temps I just mentioned), again it is bad heatsink and fan design of the card itself. The GTX 460 cards are supposed to run much cooler and quieter, but these Zotac cards run hot and loud just like a GTX 470 and 480 (I was getting same temps and these things are noisy at even 50% fan speed). I may still buy Zotac, but I RMA'ed these cards - I recommend either a reference design GTX 460 or one of the aftermarket designs with multiple fans, but stay away from this one - it is a mini-GTX 480.

Overall Review: This card requires a bit of tinkering to reach its full potential. I have read several reviews from tomshardware, techreport, anandtech, guru3d and techpowerup before purchasing this card. All have stated that the card is not as efficient at cooling and noticeably louder than other gtx 460's. I purchased it anyways because it was considerably cheaper. Plugged the sucker in and noticed that the reviews were correct. Card idles at 40C and reaches 90C during game loads. I have an Antec 300 with 4 fans and good cable management so airflow is not a problem. MSI Afterburner is a MUST HAVE for this card. The voltage on the card can be lowered and the fan profile can be customized as well. After optimizing the card, it is MUCH quieter and averages around 60C on load even with the fan at a lower RPM. If you want to go even further, you can reapply thermal compound to the heatsink to improve cooling. Overall, an excellent buy. After tweaking, it is just as cool and quiet as other GTX 460'

Overall Review: Benchmarked this card in FurMark with xtreme burning mode and it maxed out at 80c.. so the people who are saying this card runs "HOT" need to fix their air flow or get a better case. At idle, it runs at 40c with the stock vga cooler.

Pros: It works... well the second one does. Fan noise hasn't been a problem for me, though I haven't tried placing a heavy load on it.

Cons: RMA'd my first card as it was a source of random and login freezes (apparently many 460s have this problem as posted on nvidia forum).

Overall Review: Not sure if I even registered my product in time for the lifetime warranty, which played a factor in choosing a graphics card for my system, but RMA'd my first one with no problem aside from having ME to submit a ticket asking for the status of it. Zotac support is hardly that, forums gave no help when I experienced the freezing, just said if it's a NVIDIA problem, then its not their end's problem. I've been trying to register my replacement to no avail, as it says its already registered. I've submitted tickets regarding it, and none have resolved it, and I'm coming close to the deadline to register it for my original warranty. If you want the best support for your product, I'm pretty sure it isn't here. Don't be tempted by their lifetime warranty.

Pros: Based on the reviews from around the web, I bought two of these babies to replace a Crossfire set up with two Radeon 5870s, and they have not disappointed: in all my games they completely keep pace with the performance I was getting from the 5870s, for a fraction of the price. My folding@home performance has risen by over 500% as well (that's not surprising though: Nvidia cards are far better supported for folding@home). And my prower usage is a lot lower as well. Other pros: - Zotac's lifetime warranty - non-reference external exhaust design - price: significantly cheaper than EVGA's similar offerings with lifetime warranty - the only GTX 460 on the market that offers display port - smaller than many other cards on the market of similar performance

Cons: - the second DVI output eats up a good bit of the exhaust area - power connectors to the rear of the card instead of on the side; it's not a problem for me in my case, but some might find it inconvenient in smaller cases - Newegg was not participating in Nvidia's Just Cause 2 giveaway for the 400 series - bundled with Ubisoft's new Prince of Persia game: like many other gamers, I don't like Ubisoft's DRM requiring a continuous internet connection to their servers even for single player games, so I refuse to play their games; thus I lose out on a free game. That's the price I pay for sticking to my ideals.

Overall Review: The GTX 460 is a great offering from Nvidia, and delivered in a superb package from Zotac. To anyone considering a single higher end card like a Radeon 5870 or GTX 480, I say two GTX 460s in SLI will absolutely destroy any single top end card for the same price or less, And for anyone considering EVGA's offerings, I just would like to point out that with XFX and BFG now out of their way for Nvidia based cards, EVGA has begun to significantly increase their prices for their lifetime warranty cards: making the consumer pay $20 to $40 more for the exact same cards. With Zotac, you're going to get the same coverage, and not get gouged just for a bit of extended protection.

Pros: Great performance, Great noise level, barely noticeable in my machine even under load Have had very few issues

Cons: Have experienced a few glitches with LFD2, but it has not crashed completely like with my friends gtx 465. Runs well, had an issue with Samsung monitor, had to enable low HDMI blacks level in the menu of the monitor, the image looked grey at first. After that the image quality is really good. Not going to deduct any eggs as my problems are probably not related to the card itself, have a slow x2 240 processor which has trouble keeping up I think.

Overall Review: Great card, I got it for 150 with rebates, good price for performance. Thinking of adding another one later after changing the mobo and the CPU.

Pros: Cheap, you can't beat the price on this, the prefomance you get in sli is as good as many highend cards. Can run in sli Over clocks to 800 mhz with ease. Runs cool, when i only have one the card always stay under 50 c with fans on 70% In sli the top card stays under 75c with the bottom at 50c

Cons: It can be a pain to get all the settings correct to run these to the fullest, but when you do these cards are amazing