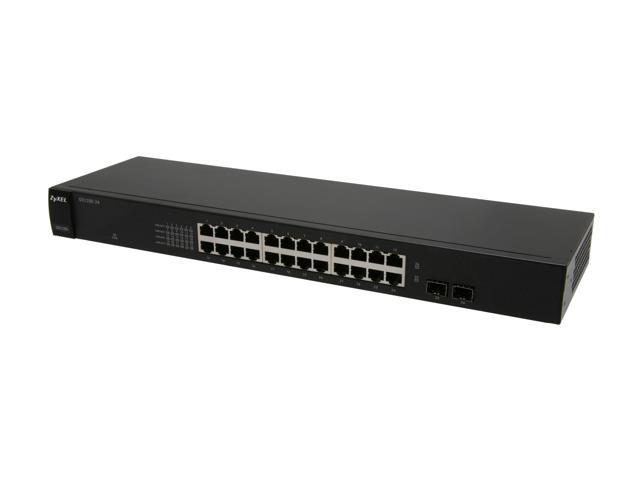 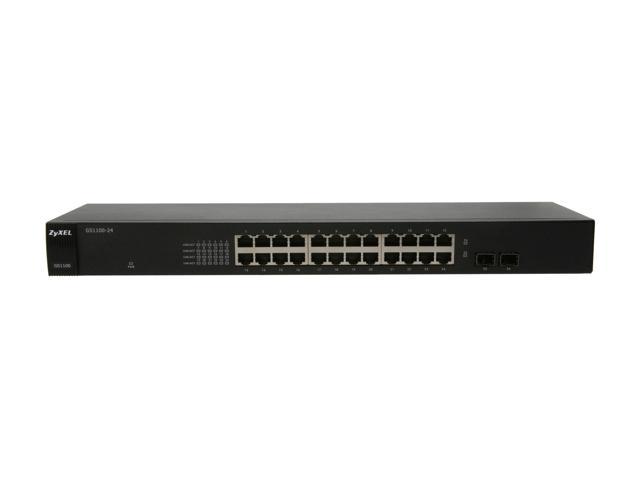 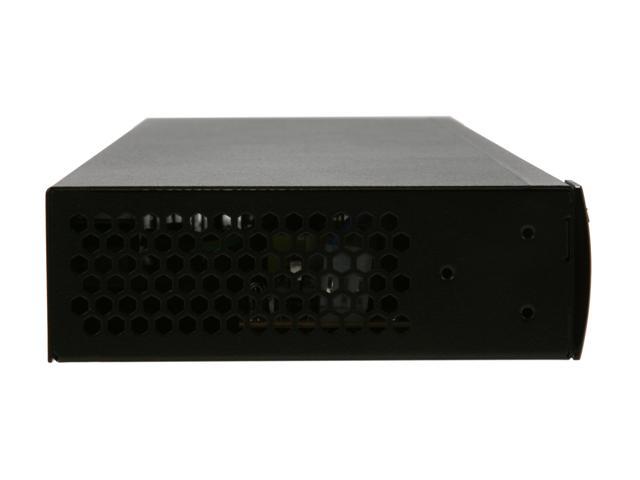 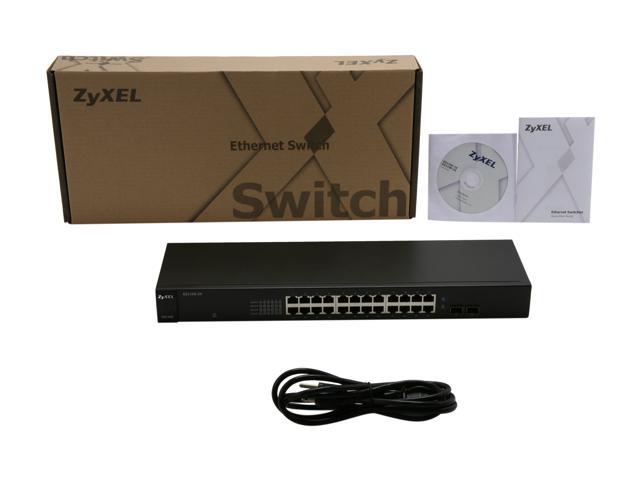 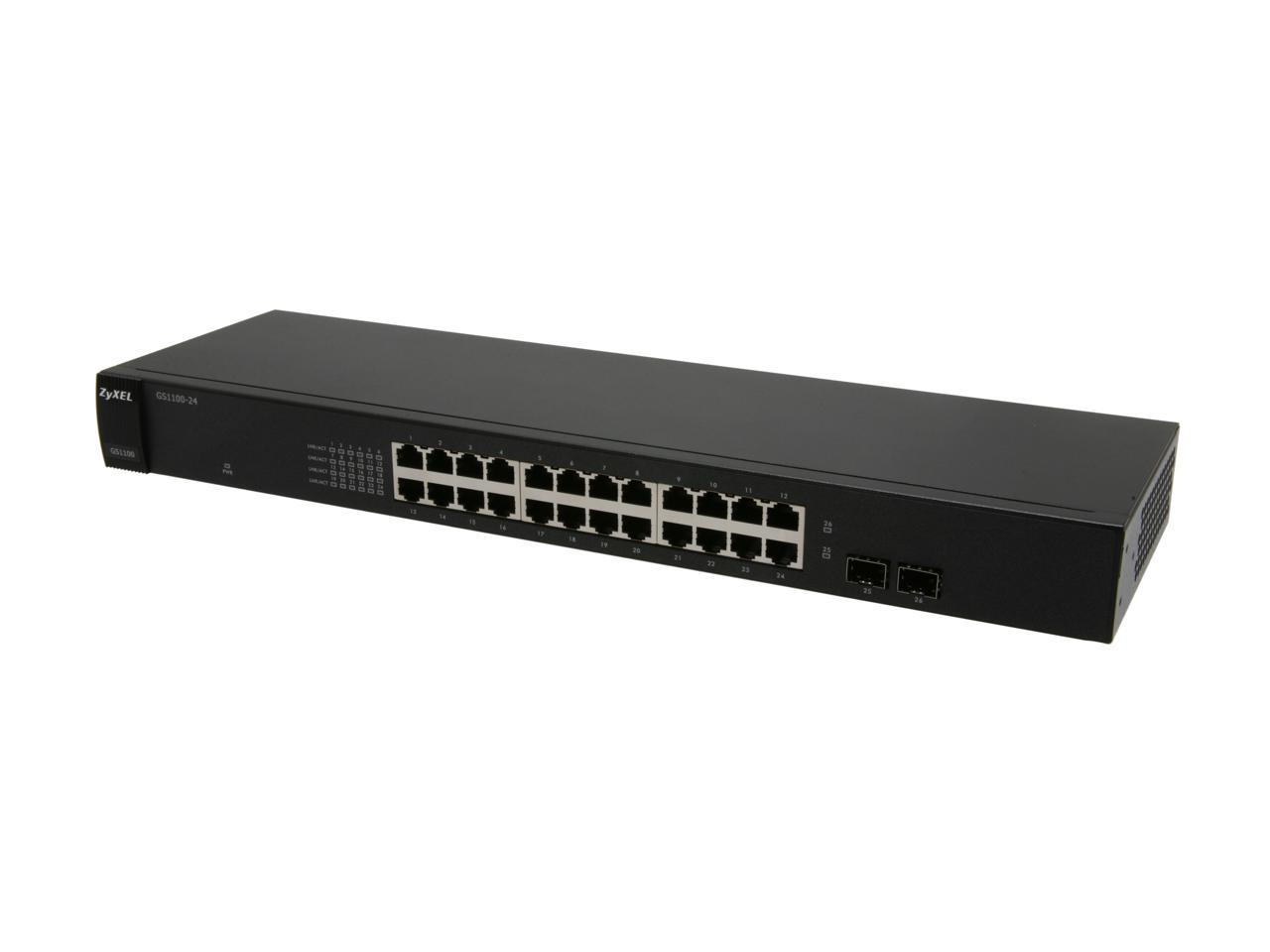 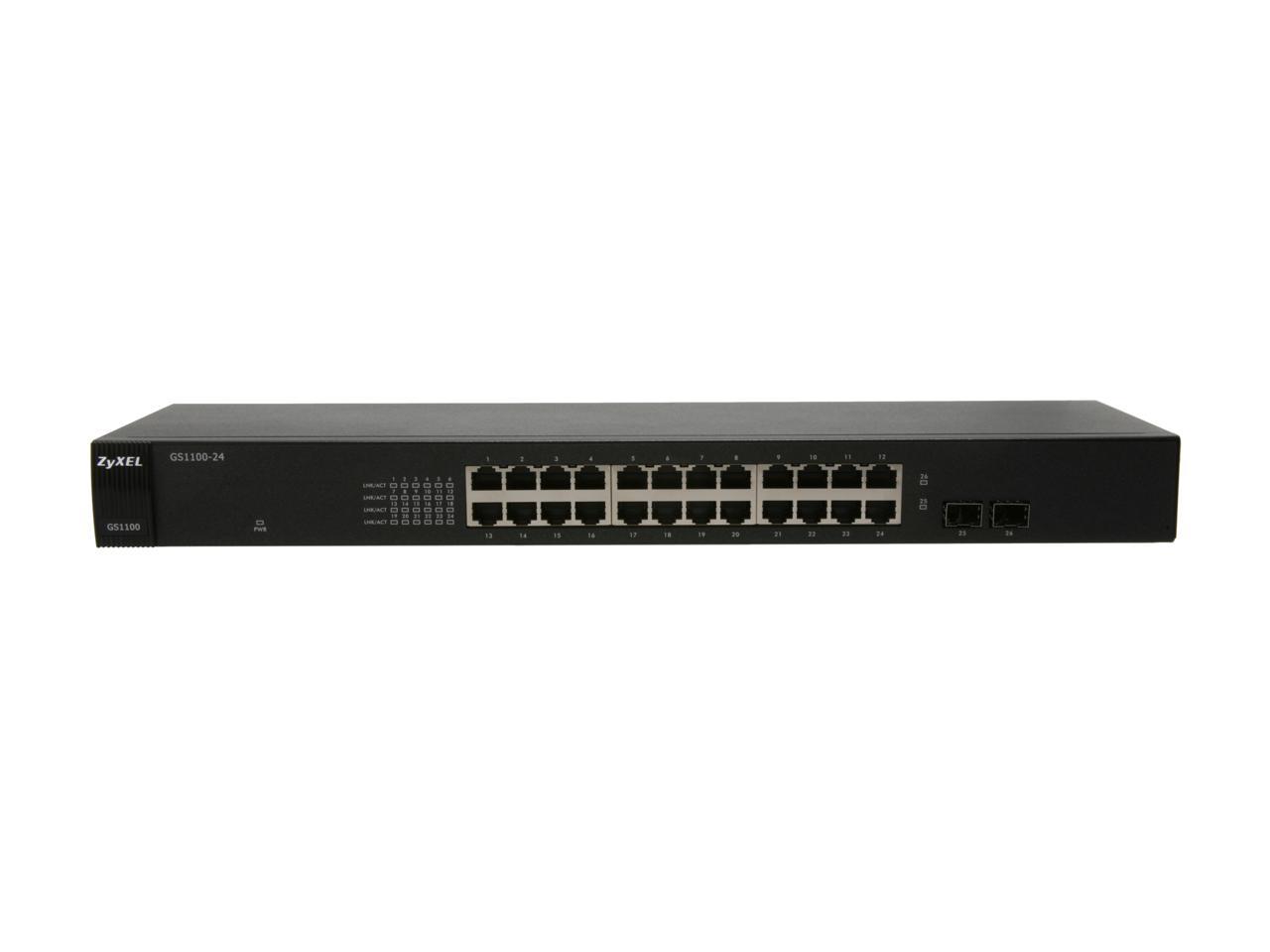 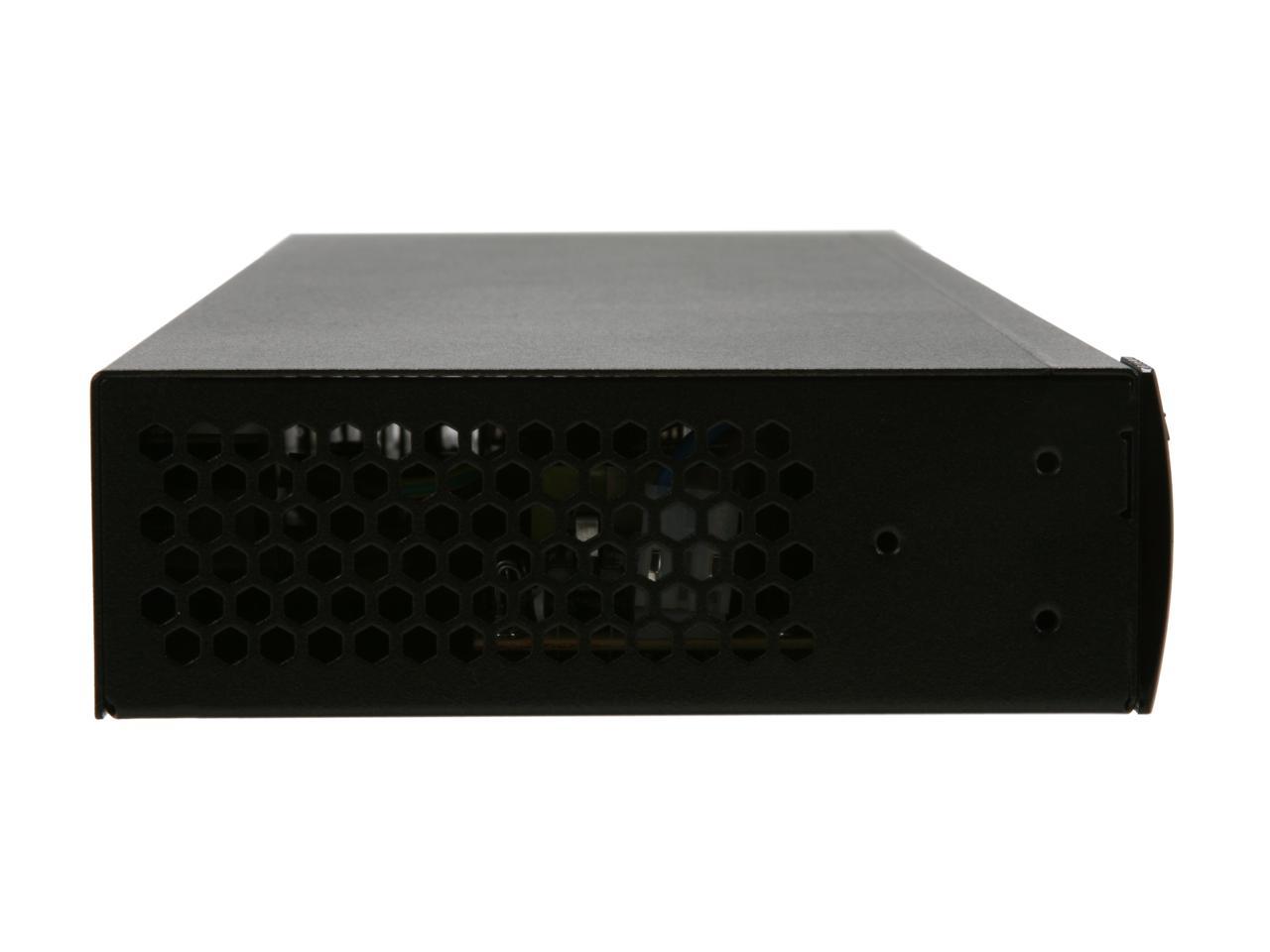 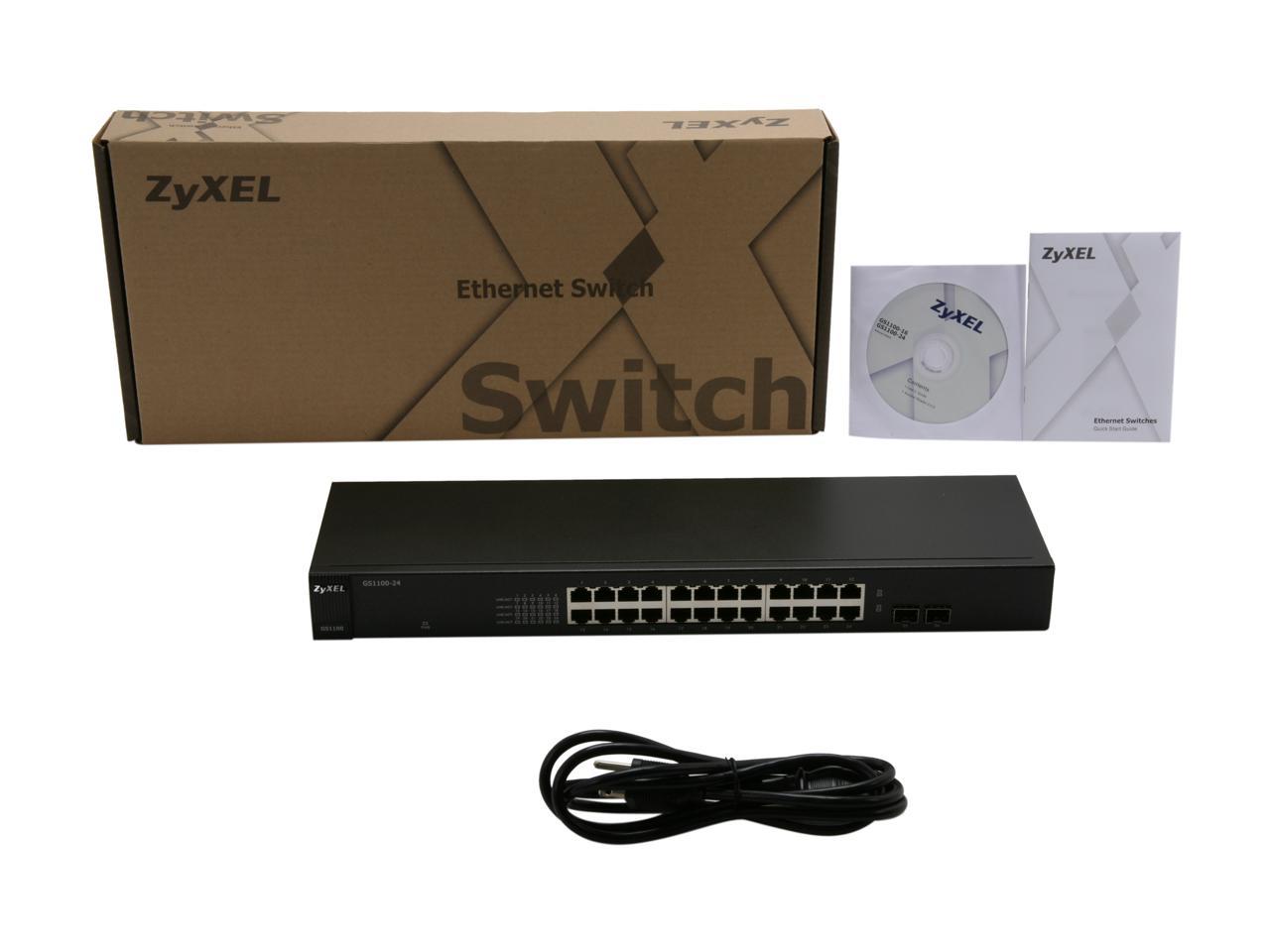 With 24 Gigabit Ethernet ports and 2 additional open SFP slots (GbE), the ZyXEL GS1100-24 unmanaged switch provides instant Gigabit connectivity to your desktop and laptop in office environments. Featuring plug-and-play simplicity, Auto MDI/MDI-X and auto-negotiation, this model make it easy to get the most out of your Gigabit network even when IT resource is limited. It also comes with fanless design and power-saving features, making the GS1100-24 a great choice for situations demanding silent operations and better power efficiency.

Cable Length Detection
This green feature enables the switch to automatically detect the length of connected Ethernet cables and adjust power usage accordingly. The shorter the cable length, the less power it consumes.

The complete GS1100 Series comes in a fanless design that ensures silent operation in small or quiet office environments. The GS1100-8HP and GS1100-10HP PoE models are specifically designed with an external power adapter that eliminates the need for an additional fan to cool down the device, making it perfect for quiet PoE deployments.

Gigabit to the Desktop

The GS1100-8HP/10HP supports the IEEE 802.3at PoE Plus standard to ease the installation of network devices in challenging spaces such as ceilings or walls. The power supply of up to 30 watts per port allows the GS1100-8HP/10HP to power PoE-enabled WLAN APs, VoIP phones and IP surveillance cameras through CAT-5 cables without extra power adapters. This feature helps enterprises reduce installation time and cost when there are many such devices on the network. The GS1100-10HP has been designed with eight full PoE Plus ports with total PoE power budget of up to 130 Watts, which makes it an ideal connectivity solution for high-density powered device deployments. In addition, the extra two SFP links on GS1100-10HP also easily extend networks to remote locations such as branch offices and warehouses for small- and medium-size businesses.

Pros: Item is well constructed and works right out of the box. Installed two into an 8 server rack, connected equipment, and powered up. Everything worked fine. Servers supported /protected by APC SmartUPS 2200.

Cons: One unit failed November 28 during midnight routine backup, which represents a medium load for this time of year. Item failed 46 minutes into job.

Overall Review: Item shipped to manufacturer last Friday, they should receive it this Friday. I will let you know what they determine.

Pros: Very reliable. Comes with rack mounting hardware and rubber feet. I have 14 conenctions to it and all is working well. Connected one Cat-5 from my Veriozn router to this switch and made huge difference in my LAN speed.

Cons: The first switch/hub I've ever had die (and I've owned over 25 for personal use - even have a 22 year old Belkin hub that works to this day). Like most of the recent reviews I bought in sale just over 2 years ago and it just passed out of warranty. If I believed in conspiracies I would say programmed death but most likely just a lot of users who bought at the same time I did and happen to have the switch die at the same time.

Overall Review: The office the switch operates in is climate controlled and had filtered power. The switch had very low usage. I can understand a hard drive under demand failing due to the nature of MTBF but an unstressed switch with no moving parts in a near ideal environment - that doesn't speak well for Zyxel. Unfortunately this will be my last Zyxel purchase.

Cons: Some might be unhappy with the fact that this unit is air cooled (fanless), that is if you put it in a poorly cooled closet.

Pros: Build Quality is good. Thing is much heavier than the old switch it replaced. Unit is shallow (I needed a shallow switch to fit in my rack). Comes with rack ears. Compatible with all my devices. Quality product.

Cons: None for now. Warranty only two years maybe a con? Jury still out on long term reliability.

Overall Review: I only have the switch about half loaded, but I tested every single port, and they are all good. I have quite a mix of devices-My primary PC is an hp elitebook on a docking station, I have a couple blue ray players, a wii with a usb-ethernet adapter, a couple old PCs, and my router is a Linksys WRT54GL. All devices work with the switch no problem. I had never heard of ZyXel. We needed a firewall at work to replace a Watchguard that was on the fritz. I came to newegg and bought a ZyXel USG200 based on the positive reviews (even though there weren't that many). I LOVE that thing! I decided to upgrade my Linksys 10/100 switch at home, and decided to give the ZyXel a try. NO regrets at all. Linksys used to be my "go to" brand of choice for all things networking, but it seems like ever since the Cisco-Linksys merger I swear Cisco is trying to kill off the Linksys brand. Well so far, based on the firewall we purchased at work, and this switch, I have found my NEW "go to" brand!

Pros: It does come with rack ears, someone here had mentioned that it doesn't.

Pros: Item arrived exactly as advertised. What a great deal, two for 172. Expanding our small company and these worked out just fine. Very happy.

Overall Review: Grab yourself a pair.

R F.
Ownership: more than 1 year
Verified Owner
Looks like these come with an internal calendar set to go terminally dead at end of warranty period11/4/2016 11:36:54 AM

Pros: Worked fine when it worked -- which was while in warranty plus a week or so.

Cons: Like several others posted here, mine also died days after two year warranty ended. Makes me wonder if they have an internal calendar set to die just past two years from initial user power up. It starting to look that way.

Overall Review: Not doing another Zytel switch again. It isn't just that it only last for the two year warranty period then dies, but having 24 network connections die in never convenient. No more Zytel for me.