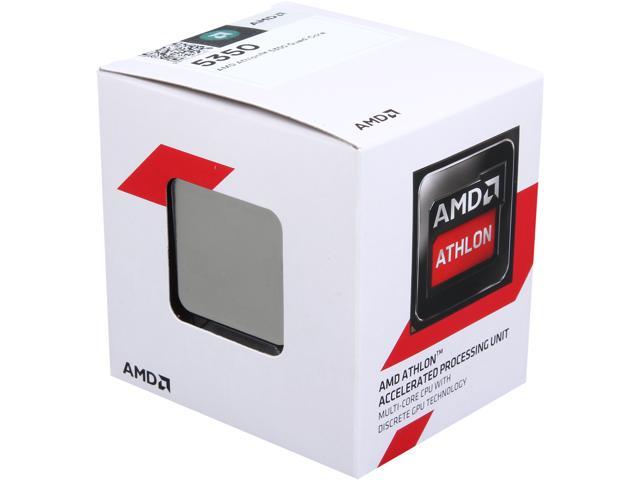 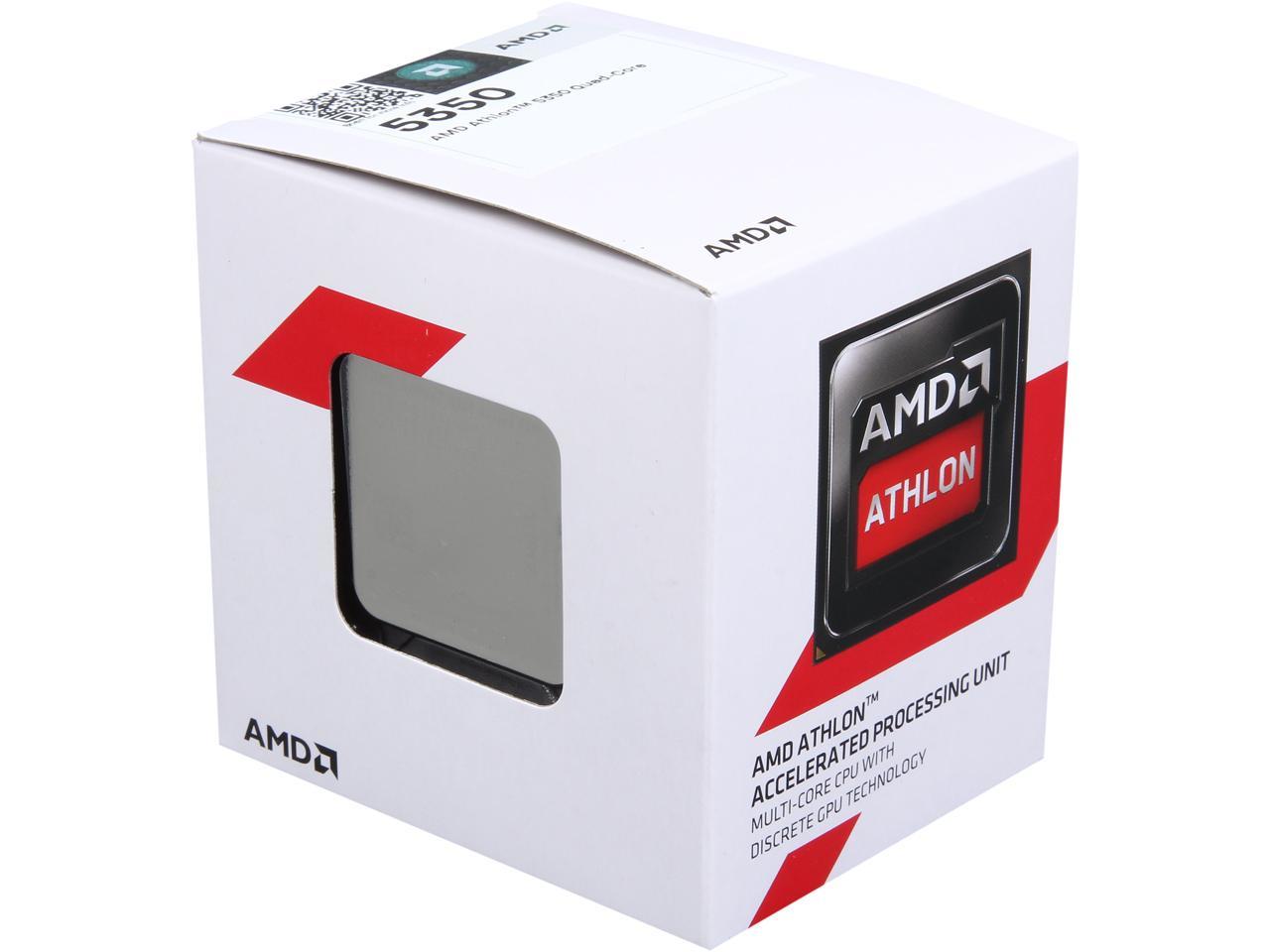 (214) Write a Review
OUT OF STOCK.
Overview
Specs
Reviews The AMD Athlon 5350 Kabini is a budget-friendly, low-power System on Chip (SoC) processor that incorporates CPU, GPU and I/O controller in a single package. This eliminates the need of a dedicate chipset on its counterpart motherboard, which further helps to keep the total cost of the build to a minimum. Based on Jaguar microarchitecture, the Athlon 5350 packs four computing cores and 128 Stream Processing Units, delivering impressive performance at mere 25W TDP. Plus, due to the AM1 socket, instead of soldering to motherboard like other low power processor, you'll have the ability and flexibility to upgrade to a higher end model when available.

Designed to grow as your needs do.

Learn more about the Athlon 5350

Jesse B.
Ownership: more than 1 year

Pros: Very low power.<br>Good performance for what it costs.<br><br>I am very impressed with this processor. I was a bit unsure when purchasing it if it would function for everything I wanted it for. But it handles the facebook games it is faced with just perfectly. This processor is a great choice for someone who does light office-type tasks, general web browsing, facebook, watching videos, and viewing pictures.

Cons: As the price would indicate, this is clearly not for high-end systems (not really a con, just something people should know).

Overall Review: I love it for what it costs. It exceeded my expectations.

Pros: This thing runs very cool. The stock cooler is honestly overkill. I'm pretty sure they could've used less metal or skipped the fan and been fine. It runs anything a chromebook can do seamlessly and instantly, but I wouldn't rely on it for much more than that. This has tested as being capable of some gaming at low quality and barely squeezing 30 frames out, but it could probably play older games fairly well.

Cons: None. It's not an i7. That's all you need to understand.

Overall Review: I'll be honest, I don't know that I would trust any of the lower end kabini processors, but this one does the trick quite nicely.

Pros: Probably the best office CPU on the market, also pretty good for HTPC and low-end computers. Sips power, even at full load. Much better performance than you'd expect: it beats most entry level Celerons and Bulldozer-based A4/6 APUs clocked far higher. Jaguar/Kabini's IPC is visibly superior to anything based on the execrable Bulldozer architecture, only quasi-external limitations (single channel memory and half-speed L2 cache) hold it back. Relatively inexpensive.

Cons: Only single channel memory, but that isn't THAT big of a deal for a basic or HTPC computer. In fact, it can be a clever way to save money if you build a lot of small computers and buy lots of dual-channel memory kits. ;) Not going to threaten most A8s and A10s, nor higher end Intel parts (simply not enough clockspeed nor memory bandwidth.) Onboard GPU is definitely not for high-def games, but at least handles YouTube and flash games at fullscreen without pooping the bed.

Overall Review: AMD, why do you not make a 'big core' version of the 'cat architecture? It's clearly better than anything in the Bulldozer line per clock and per watt! Just give it a dual-channel memory controller, more and faster cache and maybe a micro-ops buffer, and an HSA capable GPU engine and that thing would easily take the fight to Intel's mainstream offerings. (At least it won't burn some silly 125 watts while it's at it!)

Pros: Low Power Great onboard graphics - Plays Netflix at 720p no problem (couldn't test higher, slow internet, boo) -1080p runs fine on this Snappy processor with Intel Sata III SSD. Runs just as snappy as some of the higher end Intel CPUs I've used. Price, being 65 bucks at the time of purchase, was amazing. Considering Mini ITX boards start at 35 bucks for this platform, great value. Benchmarked the CPU with Passmark: This CPU - approx 2700 To compare, a Phenom II 3.2ghz is around 3900 in score. Graphics wise, this scored a 400 on Passmark. To compare, a 9500 GT is around 300 points, and a 640GT is about 1200. (Numbers not expected to 100% accurate, I didn't write them down. Feel free to research on your own) So, take it for what you will. I love this thing.

Cons: Wish it could overclock just a tad more. Graphics are very weak for gaming, but this isn't a gaming processor. Throwing a graphics card takes care of this. Seriously, what can you expect from a 65 dollar APU? So few cons, just use it for the correct application. Oh, I suppose I could nit pick and say the CPU fan is a bit weird. Totally different design from before, so took me a minute or two to figure out. Had to put a bit of pressure to get it to snap in correctly, but nothing a caveman can't do.

Overall Review: Makes for an amazing HTPC, office, home, school, Point of Sale, etc computer. Has that 'new' and snappy feel to it. Do not use this for a gaming computer (unless you play games from before 2009). This thing is seriously awesome... Can have a very snappy little quad core setup running under 50 watts total, so go ahead and use a PICO-PSU with this and have some fun. Lots of potential for lots of applications, since this thing is so low power, inexpensive, and versatile. Good job AMD, I had low expectations and was very pleasantly surprised for the money.

Cons: None really, I knew what I was getting when I bought it, won't play current gen games without great difficulty, but I knew this before buying

Overall Review: I've had this running since Feb 2015 and had no problems with installation or running Windows 7 or 10. It boots quickly with an SSD and it practically silent even while under load. Paired it with a Zotac 750ti 2gb it runs most older games at 720 and 1080 at medium to high settings. I definitely would want to pick a cpu with more power to play games made in 2014 on to get better visuals, even with this card. Most of my Steam library and Origin are playable at medium to high levels running 50 60 fps Tomb Raider to 30 40's with SWTOR and Fallout 3 and NV. Absolutely will not run Dark Souls Prepare to Die Edition at minimal graphics and lowest resolution with this pair. This should give you an idea of what it can and cannot handle game wise. I leave my computer on for days at a time and paired with the 750ti and Antec Earthwatts 380, I can hardly tell if it is on or not. I built it to be quiet and in that respect, it delivers. Once I build a new rig, this will probably go into the living room as a general purpose workstation. This isn't the CPU you're looking for to do any rendering or high workload tasks. If kept to gaming on older titles pre-2014 and general use, it's a perfect lower cost solution.

Pros: As you read from most other reviews, the pros are obvious. Low TDP, 25w, integrated graphics that can deliver 1080P playback without problem. Quad core, multi-functionality and very competitive pricing. I have used this CPU for a number of different builds now. Some of the things I have used it for are, Server, HTPC, multi-monitor and manager for news feeds on large TV’s, DJ equipment manager, internet computer, thin clients and basic use office computer. Everything thrown at this CPU has been handled efficiently.

Cons: Only things I notice I did not like about this CPU is the mounting and cooling system for AM1. The AM1 cooling system can be a pain to install in tight areas and if you are new to it, it will take a bit of reading the product to figure it out. The fan included also only provide a 3pin, but all boards I have used provide a 4pin CPU fan header.

Overall Review: With everything I have tested this CPU with, I decided to get one for myself to replace my aging home server running on a core 2 quad. Picked it up paired with a board for $69.99. I primarily chose this because of low TDP, low wattage sipping power being on 24/7 and can do so many jobs. I understood the limitations of the CPU and paired motherboards and know it can only handle 2 SATA drives with no RAID. In my build I used a small RAID card in the PCIE x4 slot to hook up 4, 4TB HDD’s in 2 separate RAID 1 groups. Each RAID has its own job. Now, I used a port replicator for 2 SSD’s that are hooked to one SATA port on the board. This was for the OS and important programs. The Port replicator mirrors data, (RAID 1) and feeds it through one SATA port providing the redundancy. The OS I loaded was Fedora 21 but changed to 8.1 pro, now upgraded to Windows 10 pro. The role this computer plays is, Plex media server, Minecraft server, Video Capture server, Ventrilo server, File (cloud) server, monitor and reporting system. All of these programs are running at once! Now, not all are being taxed at the same time but I can report that it was capable of playing 2 movies on different TV’s, have 10 people in Vent server, 8 people playing Minecraft and streamed reporting information all at the same time, never skipping a beat at all. I am very happy with this CPU and am looking forward to the next version AMD will release. I originally was going to use an i3 for this build but it could not be as efficient as I wanted nor be at the price point desired, Pentiums/Celerons did not have cores needed and the J1900 bogged down on steaming more than one video. I really wanted to use the J1900 too. The J2900 was out of the price range for what I wanted to build with. Needed the money for RAID and Power redundancy. In all, this computer has been doing its job with 1 reboot to apply an update for the last 4 months.

Pros: I got this CPU to build a computer for my wife to do school work on and other of her many internet browsing habits. It works absolutely perfect for this. More than enough to handle the 10 different word docs, and power points that are always open along with about a dozen browser tabs and videos. It wouldnt do well for gaming or video editing, but thats never what it was intended for. If you need a simple computer for easy tasks, this is it.

Cons: None, simply a great CPU for what its intended.

Pros: This processor works very well in the living room. I use it for DVD, Blu-ray, online video streaming from several services, and music. The TV it is hooked to is a 720p television (32" in Sony). I may have seen the system stutter once or twice in a couple of weeks worth of use, but only at the beginning of whatever I am watching. The system pretty consistently runs at about 20-30 celsius. and it's really quiet. I expect that my power bill will be lower, but that remains to be seen.

Overall Review: The system is this processor, the Gigabyte GA-Am1m-s2h micro atx motherboard, and 4 GB of Crucial Ballistix Sport RAM. I am powering it with an old Antec True power 430 watt PSU, which is totally overkill but also what I had laying around