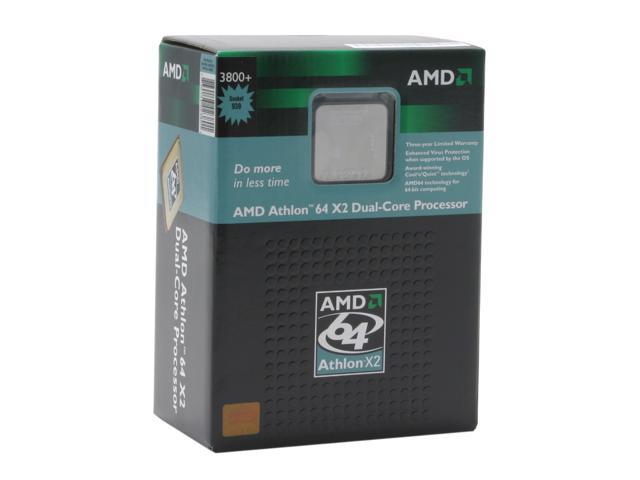 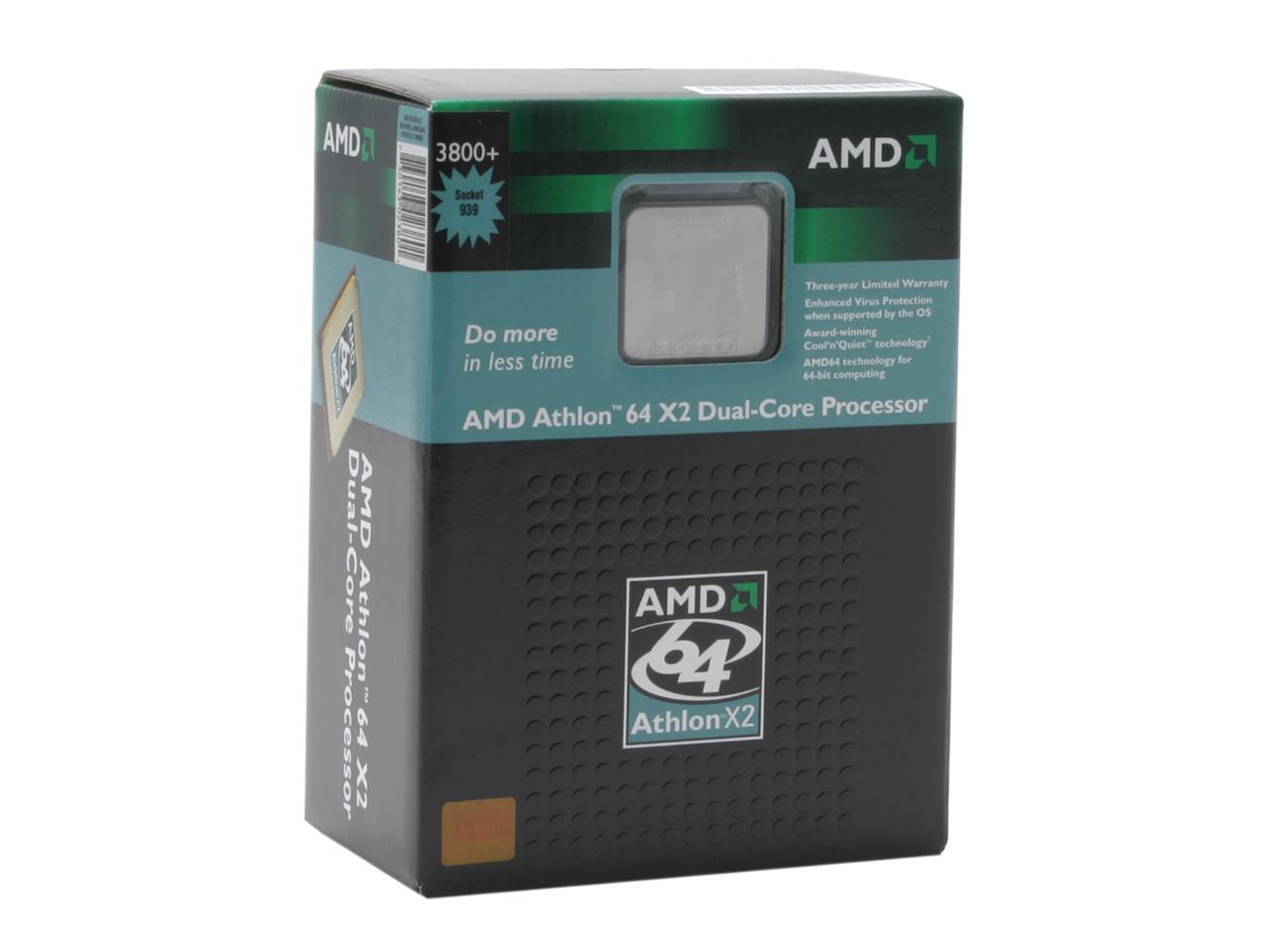 (915) Write a Review
OUT OF STOCK.
Overview
Specs
Reviews
Multitasking leaps to a new high with the AMD Athlon 64 3800+! With dual processor cores each running at 2GHz, this Socket 939 processor can manage two streams of data simultaneously while running multiple programs and the new generation of multi-threaded software. This advanced development, once seen only in "supercomputers" allows you to switch between programs without annoying delays, resulting in a potential productivity increase of 22%! It's integrated with a high-bandwidth, low-latency memory controller enabling support for up to DDR400 memory.
Other features including support for 3DNow! Professional technology and SSE3 accelerate multimedia applications and enable stellar performance when working with audio, video and photography software. This is a fine value for a 64-bit dual core processor that will beef up your processing power without emptying your wallet.

Pros: If you are looking for a great processor for a great price, this is the one to get. I easily overclocked mine to 2.4 and it still runs cooler and just as fast as my roommate's FX-53 and I paid about $xxx less than he did! Mine runs about 32 degrees C idle and about 39 degrees C under full load! If you get this processor and a gig of ram, you will have absolutely no trouble running anything. I can run any game out with max graphics settings and never slow down! This is a must have a for a hardcore gamer (on a budget like me)!

Pros: This Processor has been running great since 2006 when I first got it in my HP, now with the recent upgrade to 4GB of DDR 400 MHZ ram and my 9800gtx+ with a 500w power supply this computer can still run all the new end games and almost capped. Upgraded to windows 7 never overclocked it but if i did I would probably be able to push a lot more out of it. 10 stars for AMD. This computer and processor will probably last me a few more years in gaming and then just be a work/research/video computer :).

Overall Review: I still got this computer running good but why keep an old hp running and able to run new end games because It was my first computer, ill have this still running way past its obsolete age :), but my new computer is an eight core with 16gb ram and 6950 so don't worry staying with the new age but got to keep the old ones around, haha I even have computer still with windows 98 and 2000 but that purpose is for the different architectures and I always loved windows 98.

Pros: Unbelievable...DOES EXACTLY WHAT everyones been raving about..i SUGGEST THAT EVERYONE THAT WILL PURCHASE THIS OR HAS THE CHIP SHOULD DOWNLOAD AMD Dual Core-Optimizer ultility form the AMD site..heres the LINK...http://www.amd.com/us-en/Processors/TechnicalResources/0,,30_182_871_9706,00.html

Pros: Low heat (with 2 cores it idles at 29c to 33c and barely hits 40c under full load for extended periods (using zalman 7000 cooler and artic silver 5). Excellent capability to multitask - fast architecture. Much faster and cooler running than my Dad's dual core presler that has 2x 3Ghz cores.

Cons: Price could be lower (Intel has just come out with a dual core at about half the cost of this - it would be nice if AMD had a dual core in that range too).

Overall Review: Many people don't understand dual core. It is often said that performance won't increase until people start designing more multi-threaded apps, and that dual-core cpus will only make sense then. That is not true. Your system is always running dozens of processes (programs) in the background, and with multiple cores, it can run them each on individual cores. Dual core systems are more responsive because if one core is loaded to 100%, the other is available to handle other processes.

Pros: Tested multi-tasking in Passmark... turned on all options, both cores maxed out, but bounced off the top... and still gave me breathing room (I opened outlook during the test, just a tad slowly) unlike my XP3200, which (if I could move my mouse) I'd have to cancel out of, or do a hard reboot... Plus AMD utilities to assign programs to the cores - very cool compared to the old "dual CPU systems, where the software had to be written for it (Photoshop, already optimized, friggen FLIES on this thing, and we're talking a mATX mobo, ATI 300... and it's the in the low rent district of the AMD X2's.

Cons: C&Q feature is kinda flaky, especially combined with my mobo's own cooling solution. But it had some neat results on occasion - like setting the cool and quiet on, and the board's mode to 40c, all fans shut off - with no adverse effects on programs I was running - talk about cool and quiet! (I think there were no adverse effects anyhow). Well, it still works, anyhow. I just use one or the other now, not both. A totally silent PC with that much horsepower is kinda... scary. Gaming will be slower, going from a 2.2 to a 2.0 chip, but the new GPU's should cover that loss if I need it. I'm going console more anyhow - tired of the "upgrade for gaming" routine on PC's - consoles are what they are for several years.

Overall Review: This M2 thing is a dangerous move for AMD, going to DDR2 and new socket at the same time... and endlining 939, which could have been made DDR2 - gonna standardize the memory market, but probably alienate some users. (like me - I ain't got the cash to burn every other day - the CPU folks could use some console philosophy... optimize what you got to work with - every new hardware release means 200 MS patches, etc., (please don't start, linux/mac, er InMac Dual Cores* -this is about all of us. Anyhow, These 3800s are hard to come by at times, but offer the best price/performance mix of the lot. I suppose with another "tweakable" motherboard, and good ram/cooling, I could get some pretty high speeds out of it. I'm just disappointed that mobo mfg's are already discontinuing 939 boards they just released, probably in anticipation of the M2, or realizing that the competition is becoming the better product - but what's left of the 939 mobos are getting much cheaper

Cons: Noisy heathsink, be sure to budget in a silent heathsink ... or a pair of earcuffs !

Cons: Fairly expensive as compared to single core options. Amount of benefit from second core varies depending on the application (as with any multiprocessor)

Comments: Former system: 3500 (Clawhammer 2.54 stable) Abit Av8 4x512 Corsair valueram 2 x 250g Diamondmax10 (Raid 0) Dual 32/64 boot 6800GT New system: Only upgraded to this processor. My 3800x2 didn't get the high overclocks everyone was raving about. I get 2300 stable @ stock with my Xp-90 and a Panaflow (high) fan. It requires up to 1.55v after that is not prime stable after 2370. However is for the most part game stable up to about 2440. But it will run hot (57c under those conditions). At 2200 it will run 40c/53c temps. Performance. It's hard for me to judge this processor on speed alone, maybe because I'm used to my raid array pulling stuff up fast. I can tell you that High def files play nicely even underclocked to 1200mhz, and it will play open video windows about 2-4x faster than my 3500 did. Games run almost exactly the same, with about half of them running slightly better fps rates. My graphics benchmarks (futuremark 2003/2005) went up about 10% on cpu and almost 10% on graphics scores. My everest memory write bandwidth went up significantly (~12%), while read went up just slightly. Pointing and click is more responsive. Application locks have been decreased, but not elimated. The memory controller is more stable than my Clawhamer, this is good. Given I have not reformatted my windows partition, I might better performance once I do so. It's nice not to have WinMx lose ques after high cpu usage. I've only had this processor 2 weeks and and sure I have not seen the full potential of it yet. But for me it just isn't going to suddenly make your system look like a extreme machine. That's why I give it 4/5.