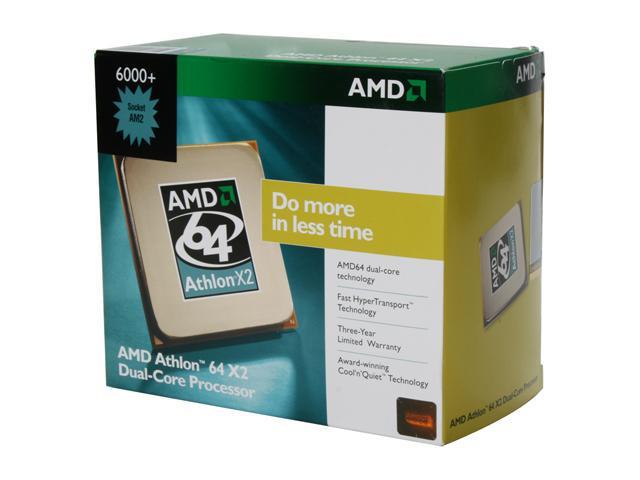 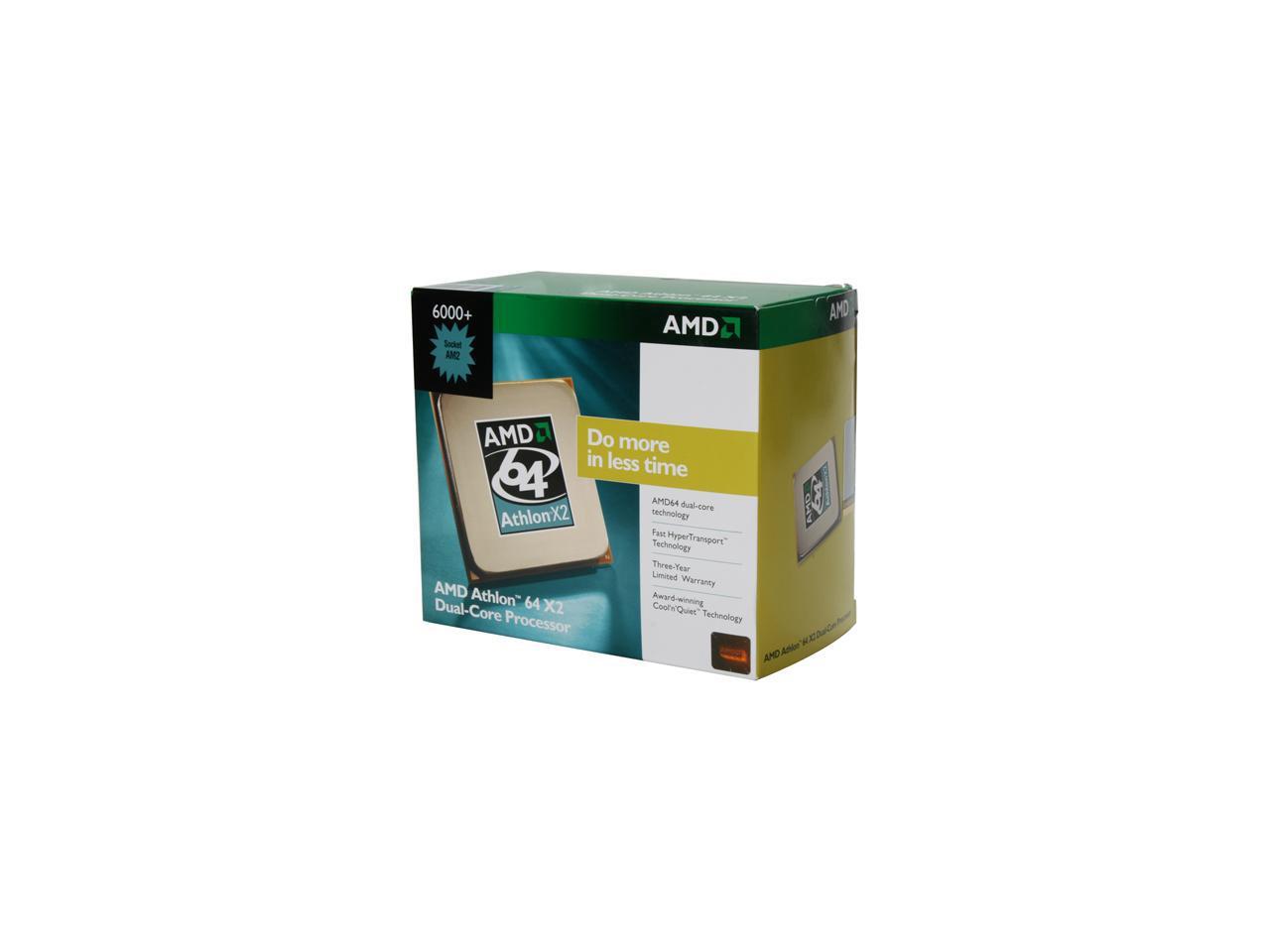 (1,514) Write a Review
OUT OF STOCK.
Overview
Specs
Reviews
Just like the Windsors rule England, AMD’s Windsor processors may rule the computer world. The Athlon 64 X2 6000+ runs at 3.0GHz per core, and each core’s power is bolstered by 1MB of L2 cache. The dual core architecture means multi-tasking and multi-threading without sharing clock cycles, so you get faster performance. Individual L1 and L2 caches for each core along with HyperTransport technology increase performance by giving each core a dedicated cache of memory and reducing I/O bottlenecks by increasing bandwidth and reducing latency.
The 64-bit design keeps you going now and into the future. The AMD64 technology is compatible with existing software and enables a seamless transition to the 64-bit applications of the future. This technology allows end users to take advantage of new innovations such as real-time encryption, more life-like games, accurate speech interfaces, cinema-quality graphic effects, and easy-to-use video and audio editing.
This processor is an integral part of AMD LIVE! This new feature from AMD will turn your PC into an entertainment platform second to none. Watch videos or TV in one room while streaming music into another. Your system will become a true media center with music, movies, and photos all organized and able to be shared amongst all of your connected equipment.

Pros: I built a system using this processor and a Gigabyte M59SLI-S5 board with Raid (10K drives) and Good DDR 800 Memory. I was able to overclock it to 3.22GHZ and it ran very stable. Sandra reports it Faster than a E6600 by a few Percent and less than 3% slower than a E6700 (which I own as well)and less than 12% slower than the E6800. There is no need to wait for then next processor as this one is very fast and shoudl mee thte needs of almost anyone with the exception of Hard Core Gamers. The price is excellent same as the E6600 its direct competitor and benches within a percent or two and the Memory performance of this processor is a good 30% better than the Intel Processor The Motherboards are cheaper and have more features than their Intel counterparts. AMD can now compete with Intel in the Mid-range processors.

Cons: I wish it was a 65nm processor and had 2MB per Processor instead of 1MB as this would probably put it on Par with the Intels

Overall Review: When I look at it now AMD has the X2 5400+ to go against the E6300. The X2 5600+ to go against the E6400 and the 6000+ to go against the E6600. The performance difference is very small around 5% which I think could be overcome by speending the 50-100 buck or so you save on the motherboard on a better Video card, Memory or both making the AMD system a better deal. I know Intel fans will balk at this but a 5% or less difference between the processors at the same price points make the performance argument nonexistant. The average and even many experienced users would not be able to tell the difference. Th eonly place Intel really wins is with the E6700 and UP and this is where the cost of the processor get out of wack.

Pros: Silly-fast, Super-cheap, stomps my old X2 4800. Halflife2 levels load in about one-fifth the time they used to, and my 4800 system had raid, this one doesn't. Every game i've played totally flies, and multithreaded apps are obnoxiously fast.

Overall Review: Windows XP needs a couple of modifications to correctly use a multi-core processor, if you're having issues (especially in games), do some research on these, they make a big difference.

Pros: There is nothing more to say about this proc but WOW. This is the quickest dual core proc that I have seen. I work for an IT consulting company and when I recieved my proc from NEWEGG (Who ROCKS!!!!) I put my system together and benched it against some of our servers at work which all have Intel Zeons or High end Core 2's and my system blew them away. I have even convinced my Director of Technology to start buying AMD for servers. We are pretty Intel heavy when it comes to proc's.

Overall Review: I have had a total of 23 applications running at one time from streaming video and audio from the web to downloading P2P running World of Worcraft and other various programs including running an antivirus scan using the dreaded yellow box and didn't see a noticable degrade in performance. I love this proc.

Pros: This is your cpu if you are looking for fast, cheap, and stable. The copper-piped heatriser AMD OEM heatsink will do the job in a WELL ventilated case. I am using a Zalman 9700 because I had one laying around and I am seeing idle temps of 86 degrees farenheit, upper 90's at load (which is almost impossible to do!). I am running Vista Ultimate on an Asus M2NPV-VM mobo with 3GB of ram. Mobo bios rev. 0801. I had to reset mobo (ground out with jumper) to get her up and running but no other problems. This CPU SCREAMS!!!

Overall Review: Newegg does it again. Great price, superfast free delivery, and I know if I have a problem they'll back up this product. LOVE YA NEWEGG!!!!!!! Hats off to AMD too for making this cpu - she's a smoker. Moved up from an AMD 4200+ --- almost a 45% speed increase but with the 2 MB total L2 cache it's more like a 60% speed bump - super fast - Love it!

Pros: Great CPU! Betterer price!!! As for performance, I'm mainly a CS player and this CPU has allowed me to jump to CS:S. There are no slowdowns in the game whatsoever and during online play, your CPU is one of the most important aspects in proper shot registry. If your CPU can't keep up, you get owned. This CPU will be your best friend. Even Source mods that really put the system to the test, like Insurgency, can't stop this monster.

Cons: Out of the box, without getting too technical, you can't run DDR2-800 RAM at 800MHz. It's has to run at 750 because of the clock speed. 3000MHz/8=375MHz x 2(DDR2)= 750MHz. Don't worry, with even a decent MB, you can overclock this CPU to have a 216MHz core clock which will bump your RAM to 405MHz x 2 = DDR2-810. So with a very safe overclock that puts very little additional strain on your CPU, you can forget about this little issue that some people are making out to be a mountain.

Overall Review: Paired with an ABIT Fatal1ty AN9 32X , a Geforce 8800GTX and 2GB DDR2-800 RAM, my system smokes everything I've thrown at it. There is more to my system, but I'm not about to go bragging...just read my reviews. I say for the price...Intel who??? Seriously, I don't know what people are talking about saying that AMD is in trouble. Sure, this thing runs hotter than the rest of the line, but it's 3GHz! And it's cheappppp. Buy it.

Pros: Great CPU. This dual core has blown me away! Great support and optimizers available. It runs fast and 2x for that matter.

Cons: As stated in one of the reviews before, this isn't really a con...but it can be if you don't know what you are doing. Make absolutely sure you download the processor driver off AMD's website along with their optimizer or else you'll be banging your head on the monitor wondering why your games are in fast forward or slowmo. At least they are small downloads!

Overall Review: I rate this a 5 bar none. Great CPU, great support and great performance. When I get my Fatal1ty's uGuru working I will OC it and see what this bad boy can do. Remember, AMD's generally run warmer, so don't skimp on the thermal paste and heatsink, not to mention the case!

Pros: I own two Core 2 Duo machines but I decided to give AMD a try this time since the equavalent of intel's is about 100 bucks more. I was highly impressed! The stock heatsink is pretty beefy with all the copper heat pipes, it keeps it around 31C idle and 40C load. So far all my games are running flawlessly with no slowdowns. Love it!

Cons: Well the AMD sticker on the fan was off center but thats only cosmetic so it doesn't bother me.

Pros: Man, Price is the first thing I noticed. Fastes AMD AM2 Dual Core. I am using an older Thermalright XP-90 with Arctic Silver 5 and after a month(ish) worth of time, idle temps are around 34*C and loaded at 42*C. Pretty happy with that. I am running stable at 3180MHz, been playing though.

Cons: Well, only thing that's a con for me is that it's about outdated if not all ready. Such is life.

Overall Review: I replaced an AMD 3800+ single core CPU in a Biostar TForce 550 motherboard with 2 gig Corsair Dominator Ram (C4). I really was a huge increase in performance adding the second core. I only use Linux and find it works quite well.