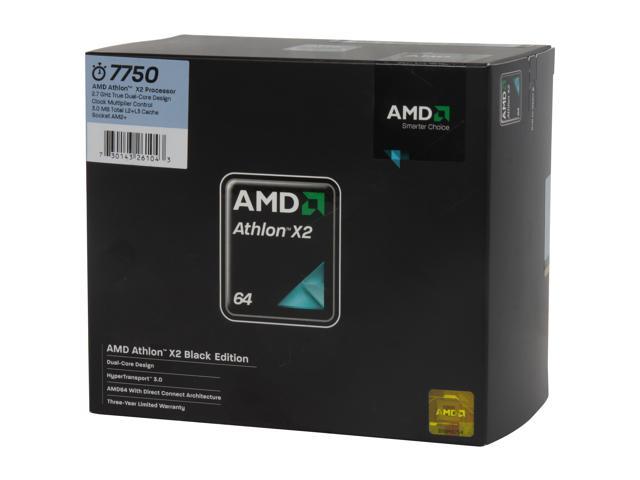 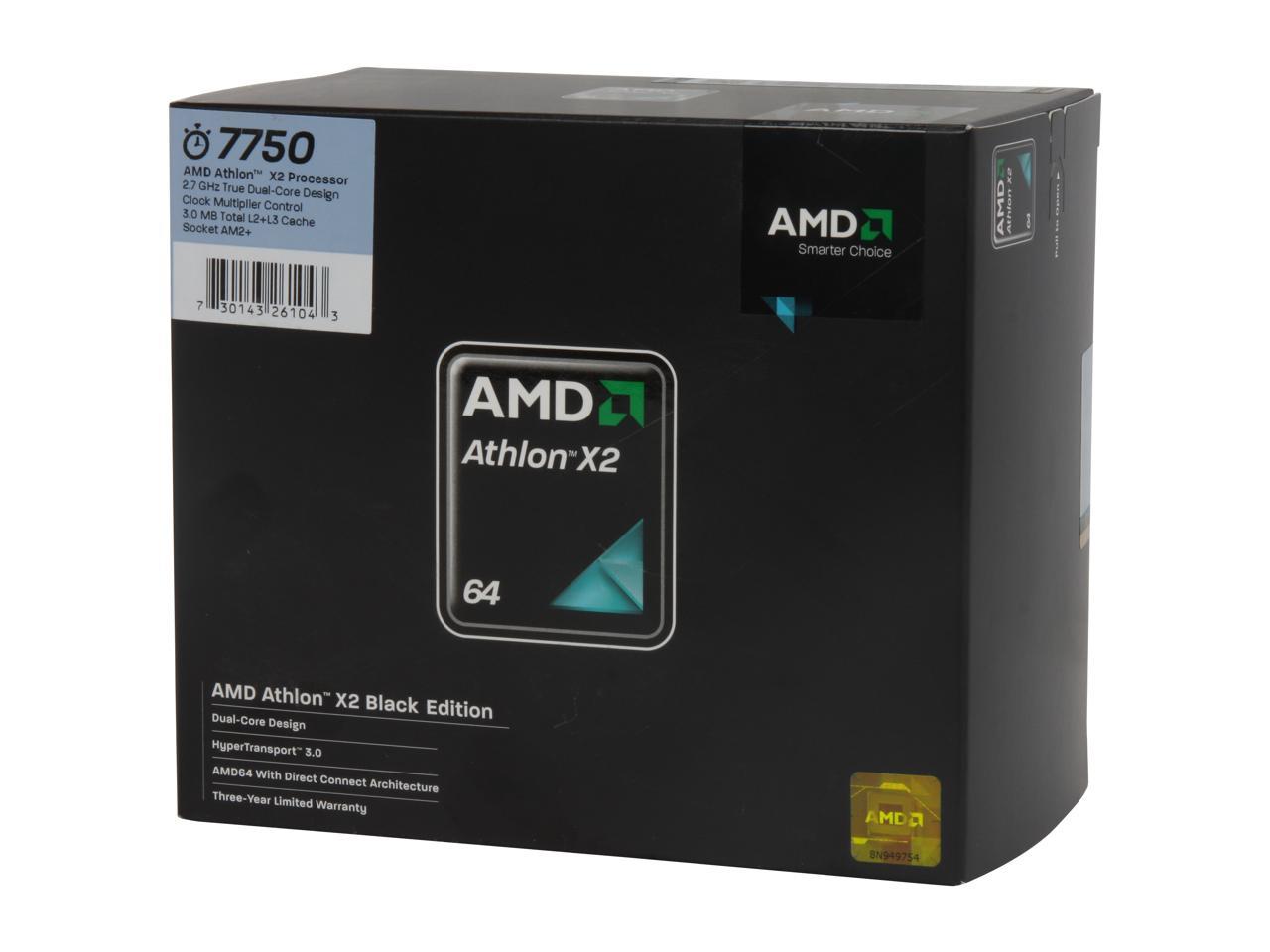 (861) Write a Review
OUT OF STOCK.
Overview
Specs
Reviews
Throw another day’s work on the "done" pile. The Athlon 64 X2 7750 Kuma makes it easy. With 2 2.7GHz cores that have their own 512KB cache, you have the power to do anything you like. HyperTransport technology boosts system performance by giving each core a dedicated cache of memory and reducing I/O bottlenecks by increasing bandwidth and reducing latency.
The 64-bit design will keep you going well into the future. The AMD64 technology is compatible with existing software and enables a seamless transition to the 64-bit applications of the future. This technology allows end users to take advantage of real-time encryption, more life-like games, accurate speech interfaces, cinema-quality graphic effects, and easy-to-use video and audio editing.
If you're going to use this processor at home, it can be the basis of a media center with AMD Live! technology. This new feature from AMD will turn your PC into an entertainment platform second to none. Watch videos or TV in one room while streaming music into another. Your system will become a true media center with music, movies, and photos all organized and able to be shared amongst all of your connected equipment.

Pros: To the other reviewer... So your E8500 "smokes" this CPU? Well I would expect it to perform better as it costs over $100 more! And I would not use the term "smoke" one persons "smoke" is another persons 3fps :) Who do people like to compare Apples to Oranges? How about this... lets compare this CPU to an Intel CPU that costs $75 Intel makes great CPU's (well now they do LOL) but when I shop for CPU's I shop based on price and I compare CPU's of "like price" as I like to get the best bang for my buck. In games the fps has less to do with the CPU as it does the Video Card so the only reason to go with the much more expensive Intel CPU's are for bragging rights.... "My CPU is faster than your CPU" I'm not knocking Intel... as I said they make great CPU's but they sure charge for them. If you want, and can afford, an Intel they go for it but I'm sick of people comparing AMD CPU's to Intel CPUs that cost far far more.

Overall Review: Those "top of the line" Intel CPU's that you see at the top of all the benchmarks... take a look at what they cost here at Newegg. The "benchmark kings" are about $1300! How does a $1300 CPU getting me 90fps in games differ from a $75 AMD cpu that "only" gets me 50fps? The "smart" people will laugh all the way to the bank :)

Pros: First off lets get this out of the way.... 1. This is nothing but a 4x Phenom with 2 cores disabled (prob due to defects), just like the 3x Phenoms have 1 core disabled. 2. You need an AM2+ motherboard but the power requirements are far less than the other "high mhz" Phenoms. It still takes quite a bit of power but 95w is doable for almost any MB. 3. This sucker is from 5-20% faster than a equally clocked AMD Brisbane, they are unlocked so you can safely OC to at least 3000mhz and most likely 3200mhz or higher if you are lucky. They have 2meg of L3 cache that the Brisbane lacks which does not do as much for games but it can help in other apps. 4. The same chip in a 3x core is about $40 more but the power requirements are higher and the fact is that few games or apps use more than 2 cores. 2 cores is currently the "sweet spot" 5. In benchmarks this baby is about the same speed as an Intel costing almost $100 more!

Cons: 1. Needs a AM2+ chipset and maybe a bios flash for your Motherboard. 2. The Phenom 2's will be out soon but they will be a bit costly for a long while. At $79 (or less) these pack quite the power and if you care about games, the CPU means far less than the Video Card for most games so save every dollar you can and place it on a better video card.... IE you are far better off with a cost effective AMD chip like this one and a faster video card rather than an over priced Intel (yes they are fast) and a slower video card.

Overall Review: This does come with a stock heatsink and fan (unlike the other Black Editions) but I still prefer a better heatsink and fan. The included HS&Fan will work find for modest overclocks - maybe 3000mhz and keep in mind that it's normal to have to bump up the CPU voltage to OC. While you can prob get to 2900mhz or maybe 3000mhz at stock voltage... as long as you keep the voltage under 1.4, you will be fine.

Cons: Didn't get it sooner. Also it didn't come with the high end Heatpipe heatsink.

Overall Review: Ran, Orthos Priority 10, for 10Hrs. Stable at 1.4v and still stayed under 50 Degrees Celsius. Going to try for 3.2GHz later. I didn't use the stock heatsink.

Pros: Quickly OCs to 3ghz stable changing just the multiplier. Using an ACC motherboard (found on SB750 or higher southbridge) increases the stability of overclocks on phenoms, and the 7750, despite its athlon moniker is a phenom x4 with 2 cores disabled, and it easily outperforms other athlon x2s with the same advertised clocks. YMMV, but on my build, it runs cool and feels like a dream. Incredible performance upgrade from my old 3600x2. On the price/performance curve, this is AMD's sweet spot.

Cons: Only an average overclocker. The first 300mhz are easy. With some patience, you can get another 1 or 200mhz with voltage increases, though perhaps only on an ACC mobo. Not a lot of cons though--it's a great chip even at stock speeds.

Overall Review: Got the combo together with the biostar 790gx3 motherboard. 2 GB corsair xms2 ddr2 800 ram. Used stock cooler, though I've read some people didn't get a heatsink, I did. Nothing fancy like the ones that come with phenoms, but it gets the job done. Keep in mind that no two chips are created equal. Your mileage will vary, but this chip is a lot of bang for your buck. I upgraded from a skt939 3600 x2 and the difference, even at stock speeds is incredible. My video compression (mpeg2 to xvid) is Almost twice as fast, and I do a lot of HTPC tasks, so it's a huge time savings for me. Although my last processor was a dual core as well, my ability to multitask is dramatically improved, perhaps because of the huge cache increase, I don't really know. Even performing a Prime95 torture test maxing out both cores I was able to smoothly browse and watch a tv show. No hiccups or stutters. Also, Newegg rocks. Not just the store, but the customer reviewers are top notch. Keep i

Pros: This thing is just super fast. I love it.

Cons: Had to choose between mother's day present or this. So, I got this. Thanks for all the times you yelled at me mom and ignored me when I was a kid.

Overall Review: This processor should be plenty fast for most people.

Pros: This is actually a Phenom unlocked with 2 cores disabled, very fast, stays cool in the right case. Overclocks very well. Plays games without a hitch.

Overall Review: I commented once before when I just got this chip. Right out the box you can overclock on the stock cooler. Yes it is true. In fact, after I "burned-in" the cpu.... I in fact got lower temperatures and had a lower vcore than stock on my board. at 2.7 ghz vcore 1.435 30C idle, 46C on load after burn-in 3.0 ghz vcore 1.360~1.375 20C idle, 39C on load all on the stock cooler. In addition I have 2 3.5 sata HDDs and DVD+RW drive. The case has one 120mm case fan and 600W PSU all running very stable. Got a few errors only because I just pulled my HDD out of my old dell and right into this without reinstalling windows no problemo. If you are an AMD fan and need the right CPU for the job look no further.

Overall Review: I bought this cpu for a gaming computer I built "on the cheap". It is as fast as the equivalent Core 2 Duo. I have it oc'd to 3.0 using the stock cooler and have no problems. I have upgraded several components since the initial build, but this cpu handles all the newest games I have played, including CoD 5, GTA IV, Mirror's Edge, Prince of Persia, Far Cry 2, and several others. 7750 @ 3.0 4GB DDR 1066 ASUS 4850 TOP (tomorrow will have Sapphire 4870 1GB ^^) BIOSTAR TFORCE TA790GX 500GB WD Caviar Black