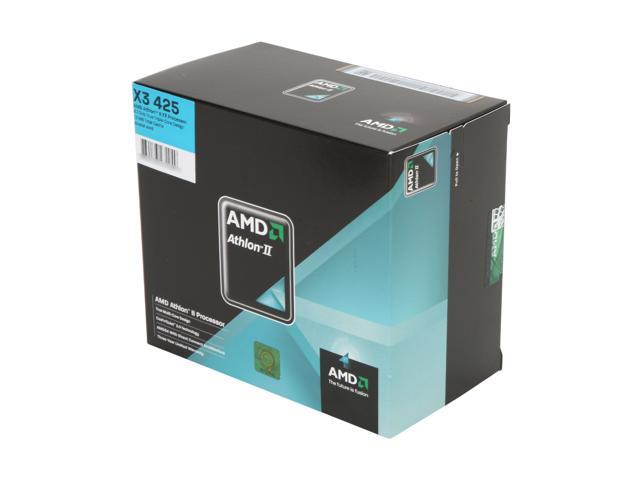 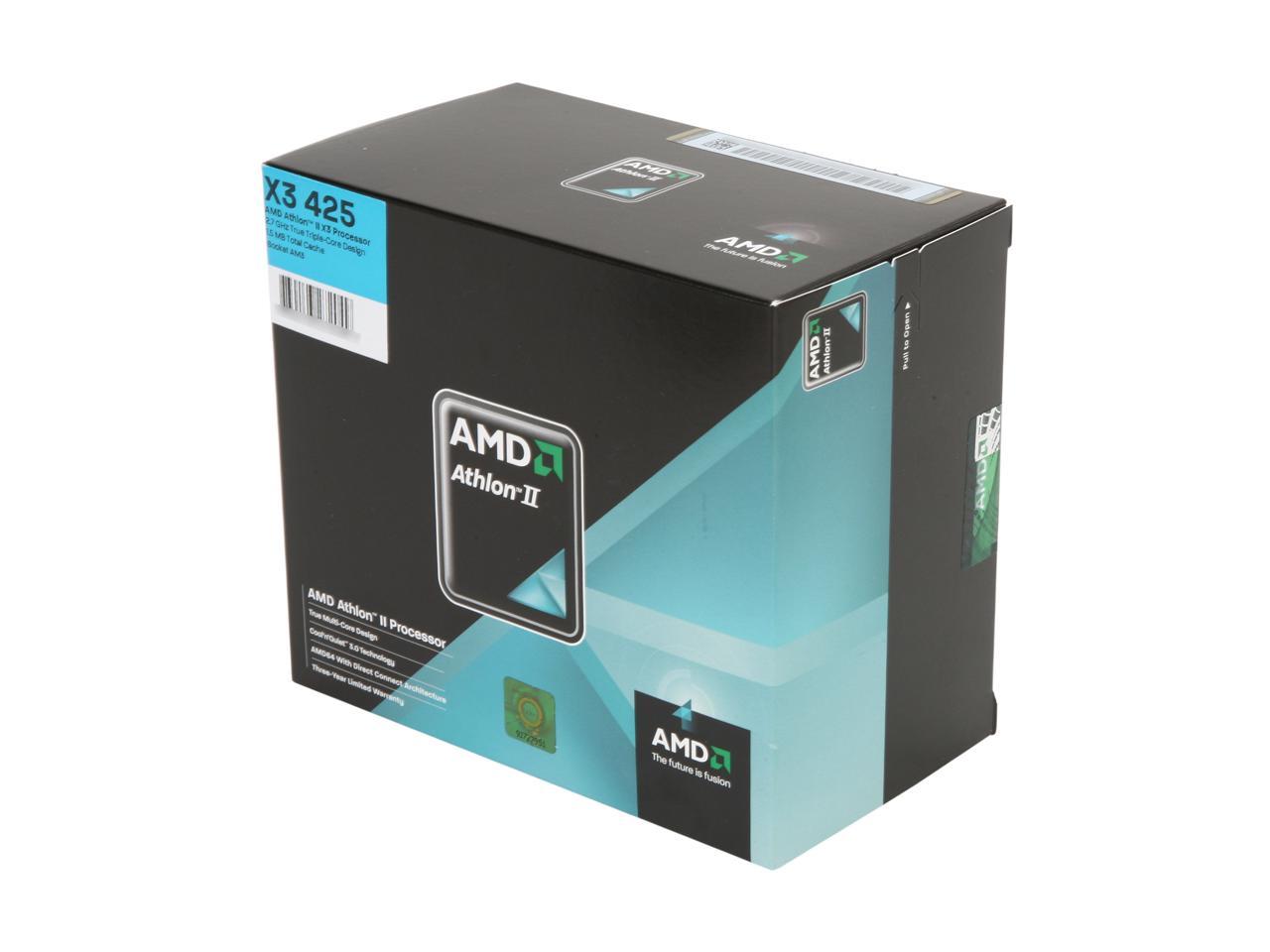 (77) Write a Review
OUT OF STOCK.
Overview
Specs
Reviews
Throw another day’s work on the "done" pile. The Athlon II X3 425 makes it easy. With triple 2.7GHz cores that have their own 512KB cache, you have the power to do anything you like. HyperTransport technology boosts system performance by giving each core a dedicated cache of memory and reducing I/O bottlenecks by increasing bandwidth and reducing latency.
The 64-bit design will keep you going well into the future. The AMD64 technology is compatible with existing software and enables a seamless transition to the 64-bit applications of the future. This technology allows end users to take advantage of real-time encryption, more life-like games, accurate speech interfaces, cinema-quality graphic effects, and easy-to-use video and audio editing.
If you're going to use this processor at home, it can be the basis of a media center with AMD Live! technology. This new feature from AMD will turn your PC into an entertainment platform second to none. Watch videos or TV in one room while streaming music into another. Your system will become a true media center with music, movies, and photos all organized and able to be shared amongst all of your connected equipment.

Pros: Was able to unlock the 4th core by enabling ACC in the bios on my Asus M4A785-M motherboard. CPU has been stable under 100% load for 2 weeks now using Folding@Home. Not one bad WU. Great bang for the buck processor. Would not hesitate to buy again. For $75 you get a nice quad core processor (provided you unlock the 4th core).

Pros: Boots a 64-bit Mepis 8.0.10 Linux operating system noticeably faster than the AMD Phenom ™ X4 9500 Agena 2.2 Quad. Ordered the processor two days ago received the package late yesterday, and it went into a Gigabyte GA-MA785GM-US2H this morning replacing the Sempron 140 that I could not unlock and use as a X2 440. So far this CPU appears to be a reasonable priced upgrade, for my Agena 2.2 Quad...

Overall Review: So far quite pleased with this snappy processor, and time in front of the Monitor will tell the Real Story... I have used a 64-bit Mepis Linux with the quad for 2.5 years and I run a good number of different function continually... This is my first X3, it is faster than the quad, and it has one less core... I looked at the X4 630, but thought i would give this CPU a decent trial and see if there is a performance improvement or hit that matters...

Pros: Fast, cool operating temperature when paired with coolermaster tower cooler ( sub 30*) "windows rating" went up half a point after a switch from a phenom X3 at 2.4 to this Athlon II X3 processor clocked at 2.79

Cons: None so far. Retail CPU's that work and clock right around what you expect tend to not have cons ;)

Overall Review: Great price. Maybe I'm out of the loop or something, but this seems pretty inexpensive for what you get.

Pros: Super fast! Installed windows 7 64bit in 10 mins. I had no intentions of overclocking, but decided to play around with it anyways. I had it up to 3.6 ghz with stock heatsink and fan. Then unlocked into a full Phenom II with the whole 6mb L3 cache and all running at 3.2 ghz. And after all this, the highest temp I had was just 36C using the stock heatsink and fan. Incredible! I am now running it at stock speeds, just because I have no need for the extra power.

Cons: Fan is slightly noisy. Not a big deal if you enable cool 'n quite or some other fan regulator on your mobo

Overall Review: Software that normally takes a while to load loads within a few seconds on this processor at default stock speeds. Playing a full HD movie only uses about 16% of the processor. I had reservations about getting an athlon II 2.7ghz because it seems low-end compared to everything esle on newegg, but trust me, it runs rediculously well!

Pros: Ability to unlock the 4th core and L3 cache. Great CPU for the money!

Overall Review: Everyone please put WEI ratings on your reviews. New Egg Please put a section for WEI Rating in the reviews and a search by WEI. This would benefit everyone buying products from you.

Pros: I put it in and it works! Great processor for those quick cheap builds!

Overall Review: Anyone who complains about the stock heat sink is being unreasonable... get your own heatsink if you are going to overclock... otherwise the stock is fine!