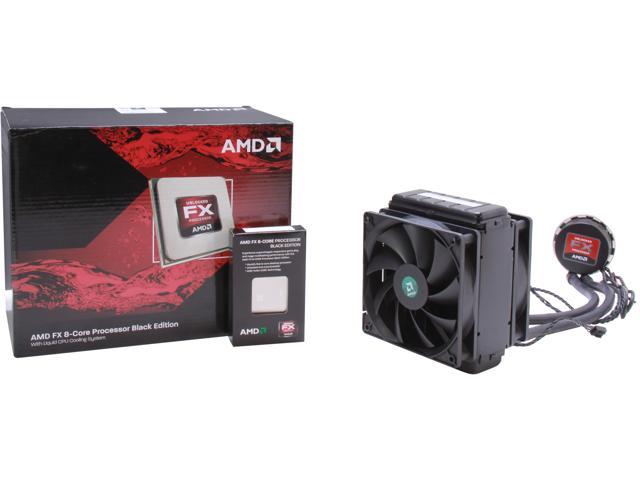 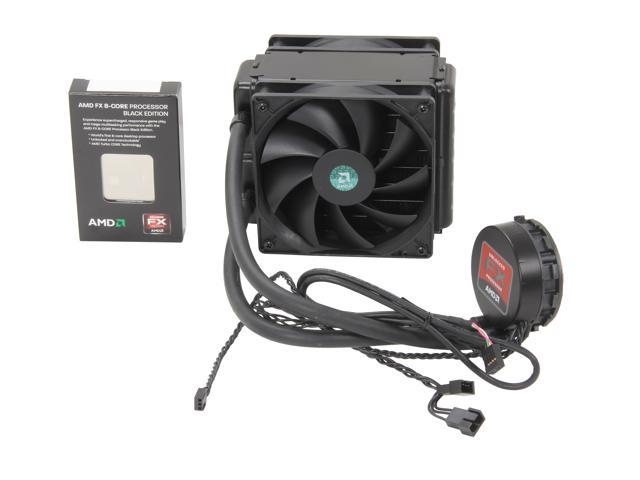 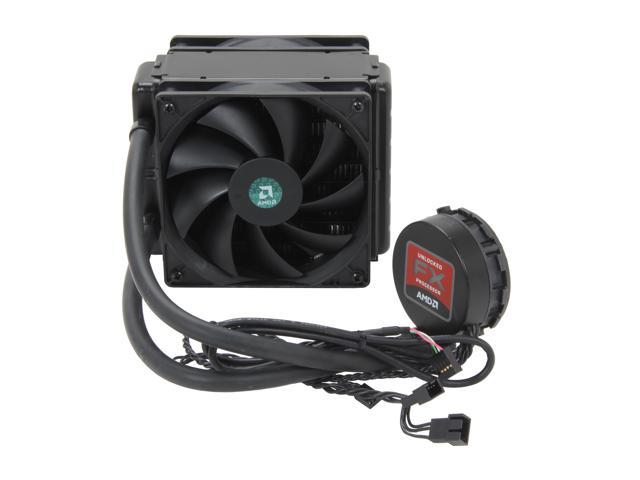 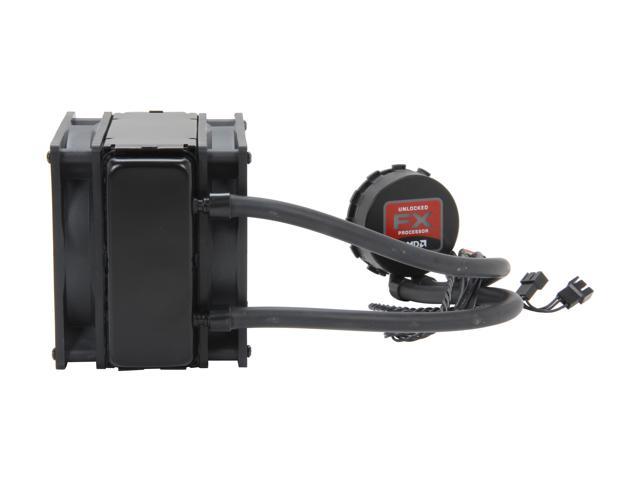 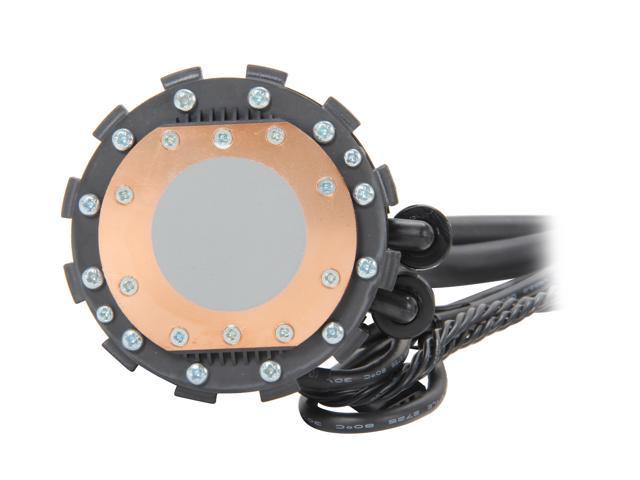 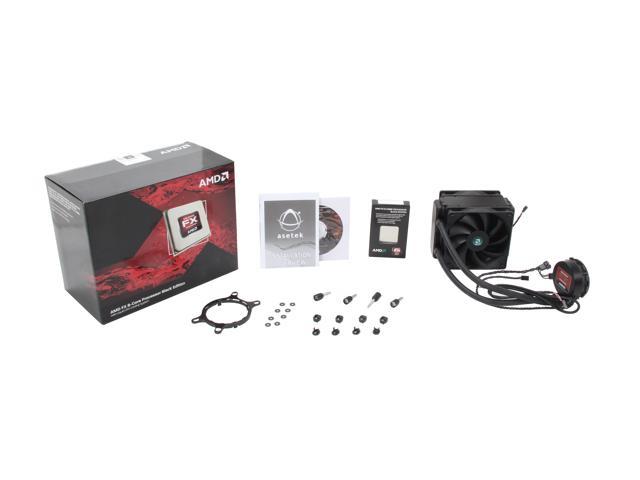 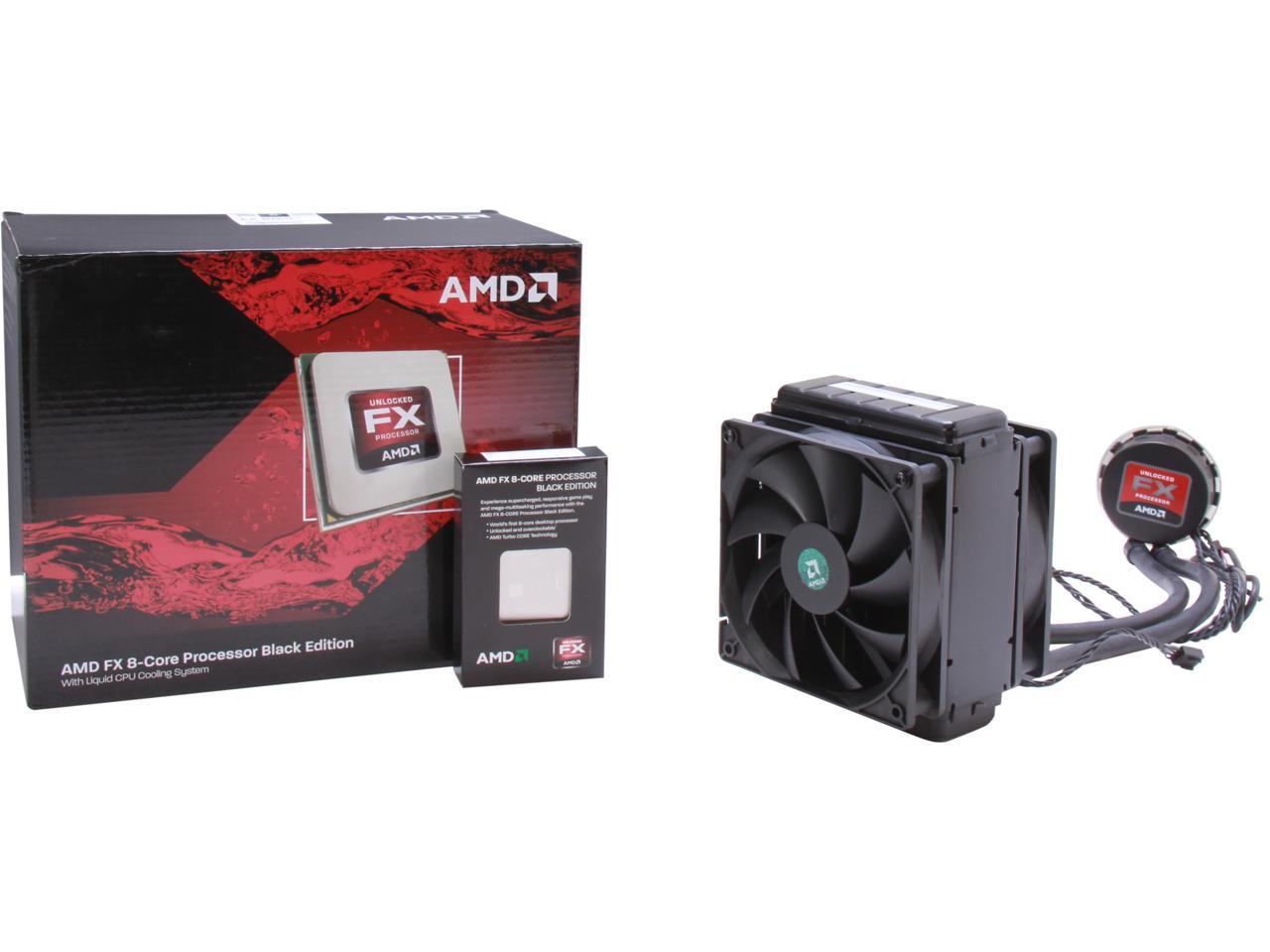 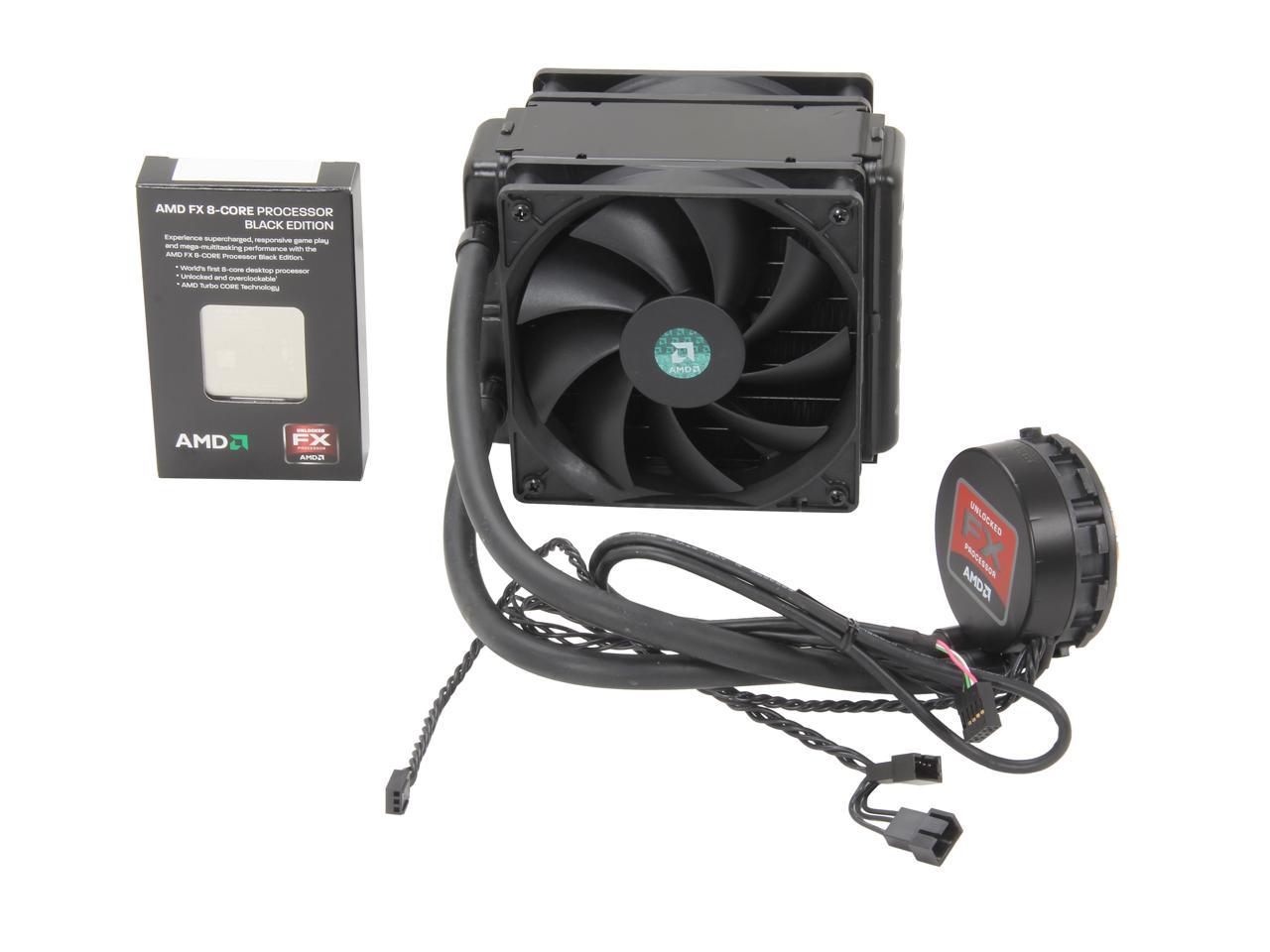 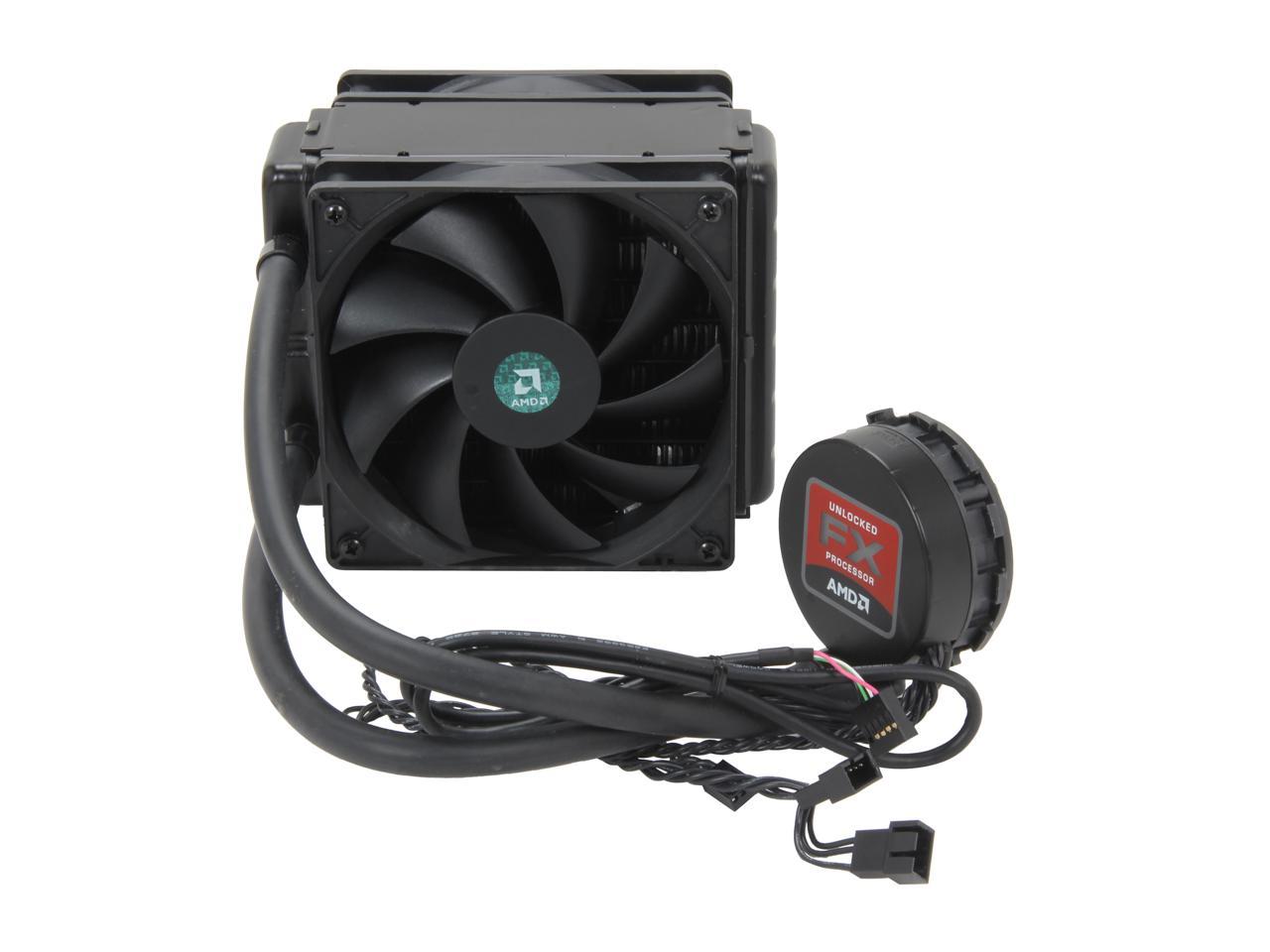 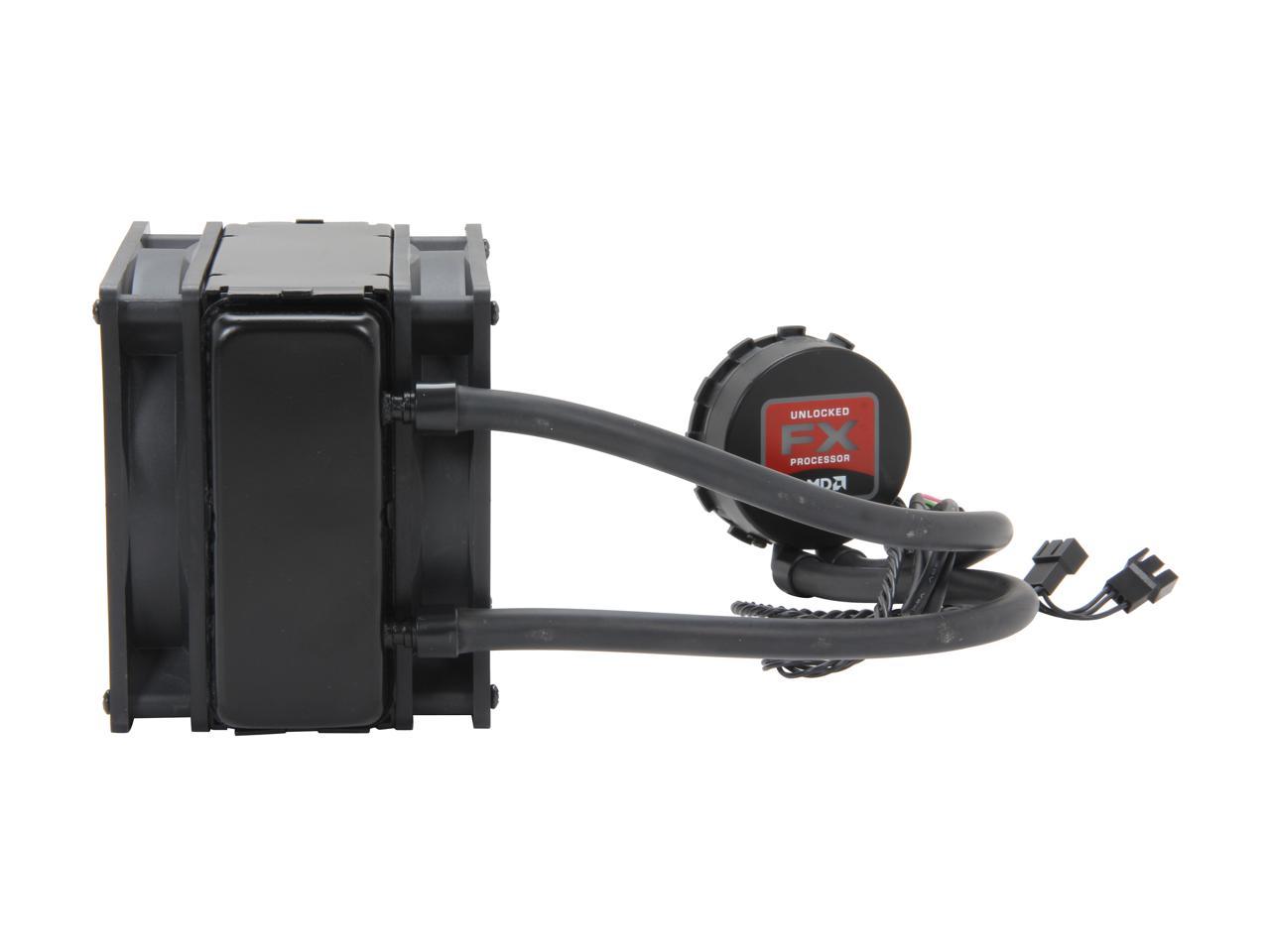 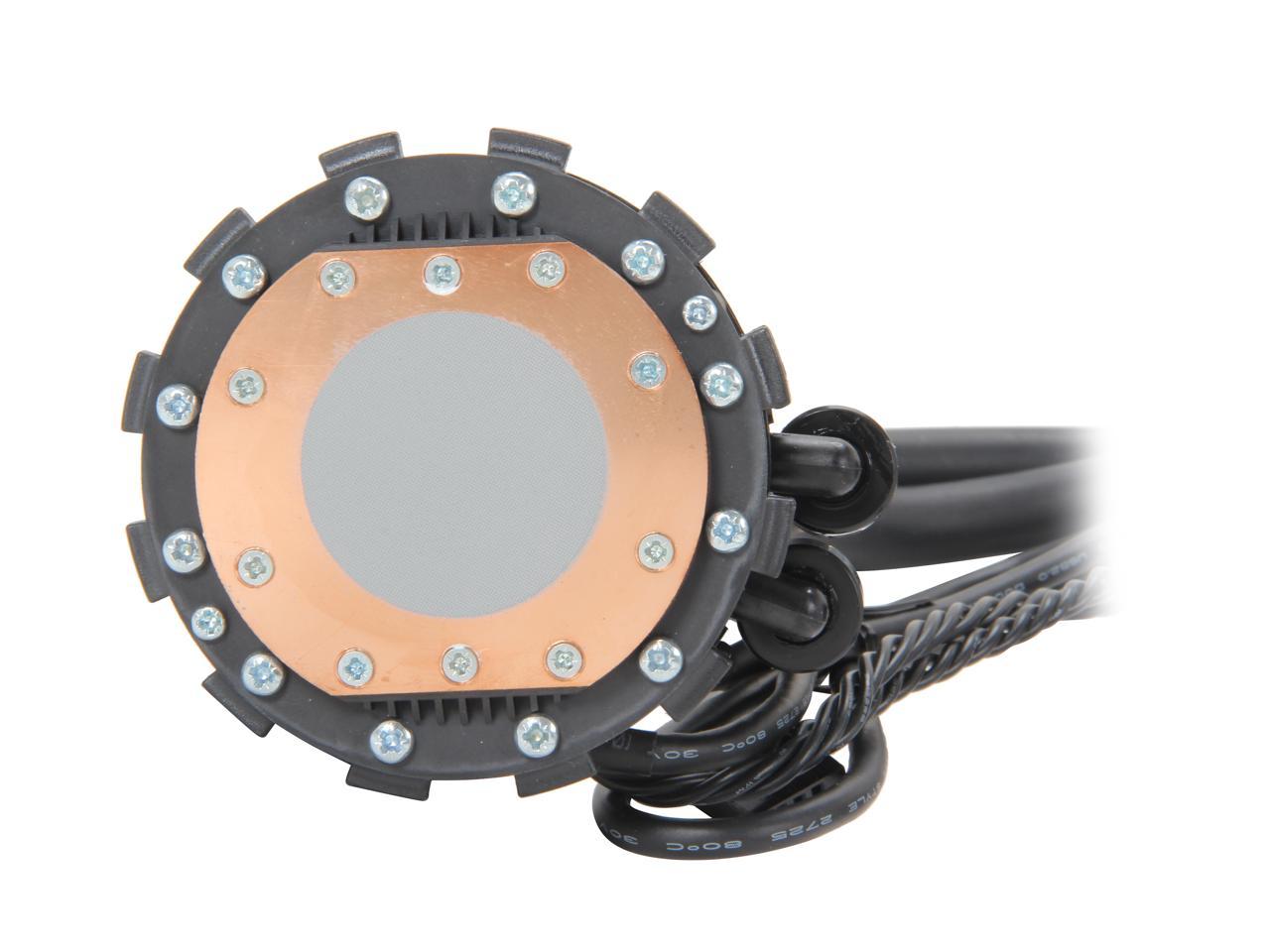 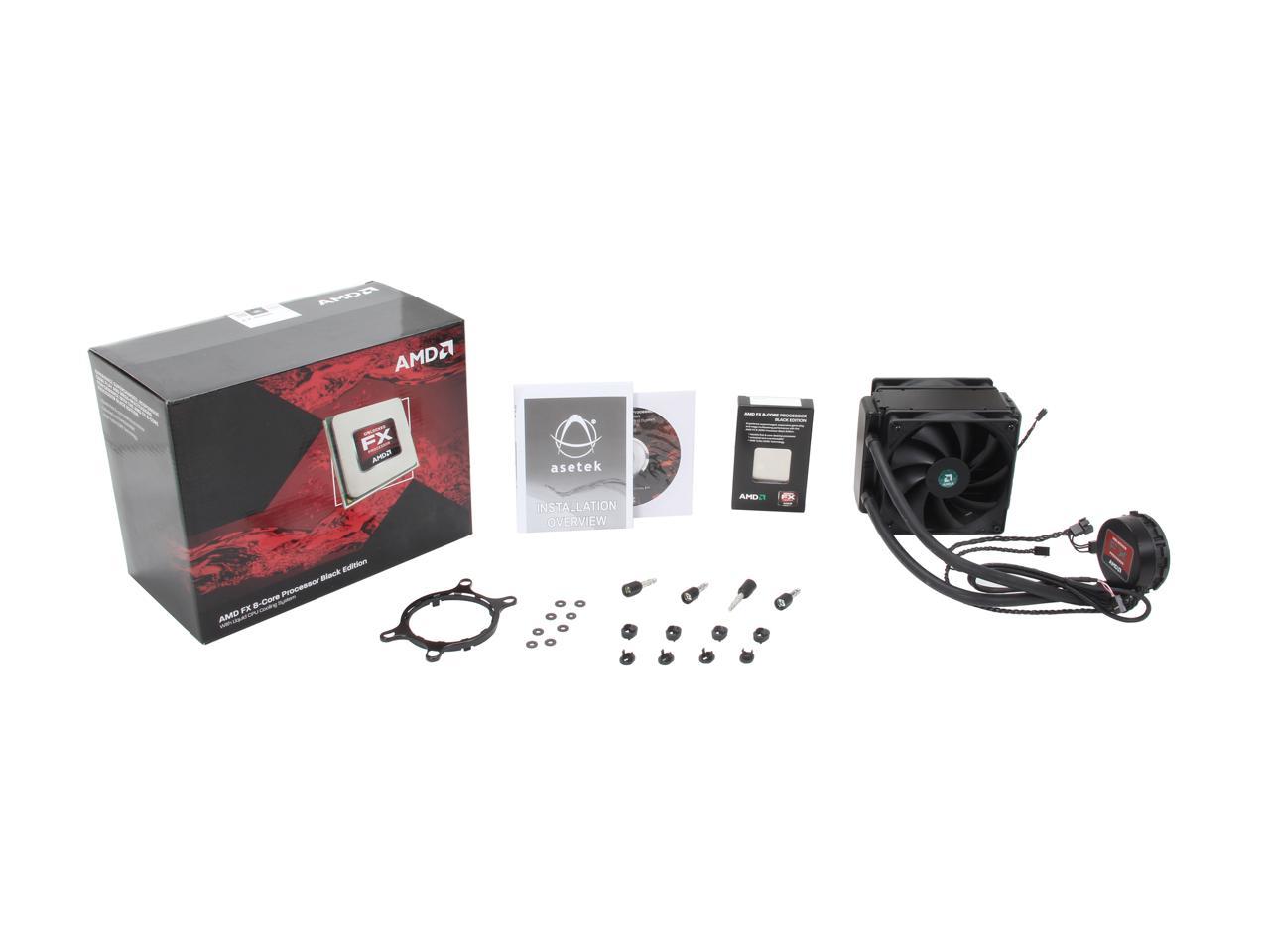 (105) Write a Review
OUT OF STOCK.
Specs
Reviews

Cons: one fan has low speed grumble if your sensitive to fans and I am. Directions on cpu cooler should not have even been included as reading and looking at them took more time than just figuring it out.

Overall Review: I have not build an AMD system in 2 years and saw the price of 189.00 including cooler and decided why not. I usually keep a system built in case I get a call for one and built this one. It runs pretty cool at 35c idle in a mid case with poor airflow ( business type case) and after replacing the grumbling fan it meets all requirements. I did not test it on games as it is not it's purpose. Not the best review for what all it can handle but I can say it installed simply with windows 8 w/o a hitch and is smooth

Pros: You will like it!! Very good performance even before overclocking. Cooling kit has solid mounting and quality radiator. This processor will carry the freight for the next two years! CPU mounting to the liquid cooler is good quality. Cooler electrical cord connector quality, wire lengths and wire gauges are good. Coolant tubes seem substantial and tube clamps are good. Radiator tapping for mounting screws are nicely done. Washers to spread load on plastic radiator fans are thoughtful touch. LED on cooler is kinda cool and cooler is quiet.

Cons: An inexperienced builder may have questions about installing the CPU/cooler. The instructions should tell you to first remove the plastic CPU cooler mounting flange on the motherboard and make sure the metal CPU retaining ring has its curved edges up. Be sure to tighten evenly mounting screws in 12 o'clock, 6 o'clock, 9 o'clock and 3 o'clock order. Don't be rough. Work carefully and try to minimize tube bending during install.

Overall Review: This CPU/Cooler combination is not for a small case. I recommend pulling heat out of case. The radiator is pretty efficient as rendering only requires relatively low radiator fan speeds. I was pleased at performance compared to I-5 and I-7 processors at higher price points. I use both Intel and AMD, and have not been disappointed with price/performance of this AMD product. Viva competition!

Pros: -Water cooler is of really nice quality. -As people have said, you can change the LED color

Overall Review: I got an overclock up to 4.8 GHz on just voltage and multiplier which is very nice, and thanks to the awesome water cooler, I'm hitting 47 degrees max after several hours of Prime 95, which I thought was a very nice surprise. I did drop it down to a quad core as games don't really benefit from the 8-core, couldn't get it to boot with the same overclock settings on the 8-core, so for those of you that want some more overclock for games, try droppin the number of cores. Before this I had a Phenom X2 unlocked to an X4 with a 4.0Ghz overclock and it's difficult for me to see much of a difference in games, however I do have a HUGE bottleneck in the graphics card department so I won't be deducting eggs for that as I'm sure that's the limiting factor right now.

Pros: Fast enough processor for the average user. I haven't tried it on Windows 8 yet, but word was that starting with Windows 8, Microsoft was going to make changes that would improve the performance of the AMD processors on Windows 8 PC's. Also, higher clock speeds then the Phenom II.

Cons: For the money, the Phenom II X4 is a better buy. In my opinion, for the average user; you will get better overall performance by using the money you saved with the Phenom and putting it towards an SSD drive.

Overall Review: I find it funny that 2 of the reviews I read that gave it only 1 egg because it didn't have 8 full cores. One labeled themselves as PCTech. Really PCTech? Didn't know it didn't have 8 full cores? In simplistic terms it has the equivalent of 4 full cores and 4 partial cores. So depending what apps you run will determine weather or not the partial cores are useful. That is why I say for average user money better spent on Phenom II X4. It does give you higher clock speeds then Phenom so it should out perform the X4 to some degree. But is it enough for the average user to notice? Probably not.

Pros: Cool and Quit 30-32 Idle with the fans as exhaust in a case with a 250mm Side Fan. Never hit above 40 C while playing Far Cry 3 at 1080p Ultra. You can change the color of the FX Push/Pull Fans are quiet

Cons: Size! the 2 fans and radiator stack up to 4-5 inches. The Hoses are not easily adjustable unless you want to take them off and cut them.

Overall Review: You have to have the motherboard out of the case to mount the cooling pad so plan ahead on your hose direction and how the clamp sits. I mounted the radiator where my 120mm rear fan was. To save space I mounted one fan outside the case and ran the wiring inside through a small gap where my power supply goes. I then mounted the radiator to the case itself inside and the second fan to it. To mount the fan outside the case you will need longer screws and washers to keep it from scarping. If you have to install a fan externally I suggest placing the screws in the fan, then using a piece of plastic and your hand, or tape to keep them in place. This will allow you to put on washers and keep them from sliding off when installing, while also keeping the screws from sliding out of the fan.

Pros: I was a little concerned with using liquid cooling and the aspects of having a potential of liquid leaking into my box, but after I received the CPU and cooling system I have to say it is top notch. It was very easy to install and to this date has not run above 40 degrees Celsius. I am an avid mmorpg gamer and 3d animator and it is essential that I keep my system cooled as much as I am able. This meets all my expectations.

Cons: To this date none that I can determine

Overall Review: For my first time installing I had to really read the instructions on how the tabs inserted into the frame, but other than that it was a great install and runs nice and cold now!!!

Pros: Price: When i purchased this the price was around $180 which is GREAT considering an AMD FX-8150 with a stock air cooler was the same price as this. Also, a comparable closed liquid cooling kit like the Corsair H80 runs around $105 and that is just the cooler and fans, no CPU included. Performance: So far everything is running as well as i expected. CPU is plenty fast for everything i do and the cooling performance is good as well. One thing to note though... i have noticed that a lot of other peoples reviews say that this is keeping their CPU around 40 degrees Celsius, which i have found is a bit misleading. When i was testing my rig i found that the included software (Chill Control?) did show around 40 degree Celsius when my processor was running prime95 for about 20 minutes, but if you look the 40 degrees that Chill Control is showing is referring to the temperature of the liquid in the cooling loop, not your processor. my motherboard is the ASUS Sabertooth 990FX AM3+. this board came with some software tools, one of which allows me to monitor my core temps. while Chill Control showed 40c, the Asus monitoring suite showed my core temps around 55c. The cooling is still superb in my opinion considering the core temp was only 55c after all 8 cores had been running at 100% for over 20 minutes. it was a stable 40c and 55c respectively for those wondering, it had not raised another degree on either monitoring software for about 5 minutes.

Cons: As many others have said, it is a little tricky to install, but don't let that scare you. so long as you don't try and force anything you should be fine. just use the instructions, and if you have trouble im sure there are DOZENS of help videos of people installing this on youtube.

Overall Review: I would strongly recommend this for anyone who is looking at upgrading their CPU and also wants to try out a closed loop water cooling system. Simply put there is no beating this price for what you get. If you are wanting to upgrade to the newest FX-8320 or FX-8350 Vishera processors, and plan on purchasing a separate closed loop water cooling system, then be my guest. That is exactly what i was going to do before i happened across this deal.... Just know that you will be spending around $100-$150 extra for only slight gains. Check out the benchmarking comparisons between the FX-8150 and the FX-8350 and you will see what i mean.

Pros: -You get an 8 Core FX processor at 3.9GHz with a water cooler. Much better than a typical cooler. -Little bonus, on the cooler is that the FX emblem on the water block lights up. -Might also be worth mentioning that this CPU is insanely fast. -Instructions for water block mounting are surprisingly good.

Cons: -You need a backplate access panel on your case to attach the water block to the motherboard, otherwise, you will have to pull the entire motherboard from the case. You have to exert a lot of pressure on the mounting hardware to get the threads to catch on the back plate. -Radiator and doublefans take up a lot of space.

Overall Review: Harder to install than a traditional cooler, but worth it.