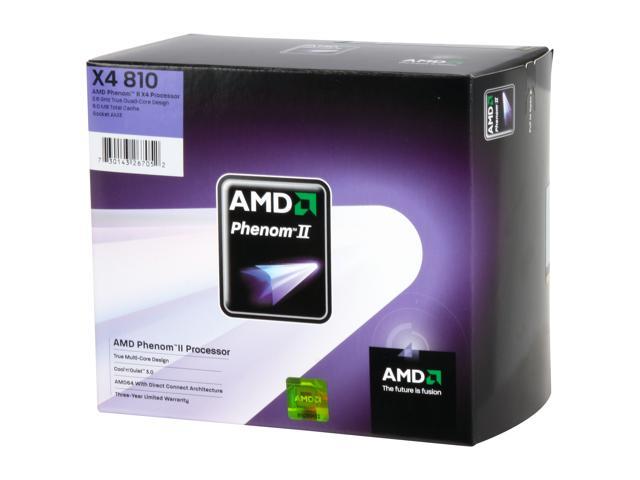 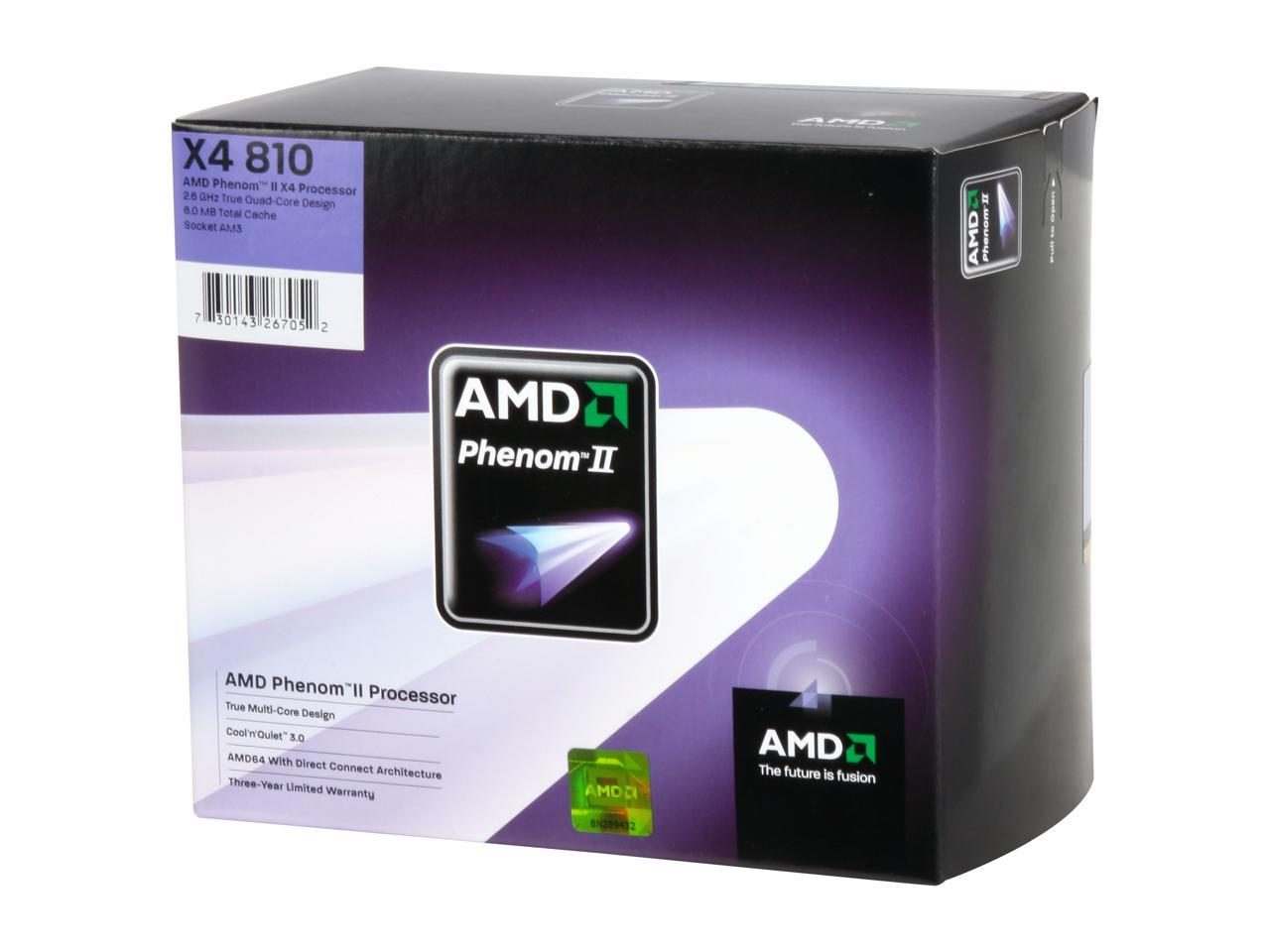 (147) Write a Review
OUT OF STOCK.
Overview
Specs
Reviews
Like the superheroes of old, the AMD Phenom II streaks out of the night to lay waste to your enemies with has 2.6GHz quad cores, L1 and L2 caches for each core, and 4MB of L3 cache to be shared to handle really heavy loads or large data sets.
Memory transfers get faster than ever. HyperTransport Generation 3.0 mode allows up to 16.0GB/s of bandwidth. Up to 17.1GB/s memory bandwidth for DDR2 and up to 21GB/s memory bandwidth for DDR3 memory controller delivers an amazing 37GB/s of processor-to-system bandwidth. This unprecedented bandwidth is needed to feed the data hungry AMD64 with Direct Connect Architecture cores.
You'd think that all of this power would be too hot to handle. Think again. AMD's Cool'n'Quiet 3.0 technology works with CoolCore Technology to minimize heat while keeping power and efficiency up. Now the cores can shut down unused parts of the processor when not in use. This saves power and helps to reduce the amount of heat generated. This function is built in so there's no need for drivers or BIOS updates.

Cons: My board give me incorrect reading (Vcore, CPU Temp). I have to use third apps to get more reading.

Overall Review: 6MB L3 cache version X4 910 have not arrive yet, if you don't care less caches, take it.

Pros: Excellent proccessor for the price, blazing fast. Was able to OC to 3ghz and get it stable on the first attempt. The temperature is moderate considering the overclock, air cooled stays around 57 with the overclock. Overall I'm very happy with this processor, I'm glad to see AMD has finally put something out that can compete with intel's monopoly. Sure the I7 cores might be a bit better, but they're also significantly more expensive. For the price, this cpu can't be beat.

Overall Review: Bottom line. If you're looking to build a mid ranged high performance machine (gaming or otherwise) this is the chip for you.

Pros: With everything that I run on my system, I have yet to have any problems with this CPU. Mostly I use my machine for school and office work, and occasionally I will play a few games (2004 era) on it. It supports DDR2 and DDR3 RAM so that leaves some room for upgrading the rest of the system.

Cons: For the most part, the processor runs cool enough with the stock cooler. However, I prefer to use a aftermarket cooler that does a better job. The aftermarket processor cooler keeps my processor under 35c with a full load for prolonged periods of time during hot summer days with little or no AC. The normal average temp is usually around 18c or less.

Pros: Price compared to Intel i7 left me no choice but to switch to AMD.

Overall Review: I could've wait for a better am3 socket processor, but after frying my p4 3.0's mobo, this is a huge upgrade.

Pros: I included the AMD 810 in a new build last summer with a Asus M4A79T Deluxe board, 4GB Corsair RAM, ASUS 4850 videocard and Vista Ultimate. After setting up the BIOS correctly, this build's HD just crackles it is so quick!!! Very, very quick. I expect a good computer upgrade here would be a SSD instead of a CPU some day. Incredibly fast with zero problems. But, no matter how fast they are, we will always want quicker. The need for speed never ends. Very impressive and stable even 10 months later.

Overall Review: Although this is not a high end, high $$ CPU, it sure performs like one. I expect it to be very reliable also as I have had zero AMD CPU problems in 9 years. I do use very expensive CPU coolers like Noctura and such because heat is the biggest problem. Some builders scrimp on good CPU coolers or not using a good sine wave UPS for power. These small moneysaving mistakes cause computer damage and then blame AMD or Intel for lack of quality control.

Pros: Still going after six months and going strong. One month ago I noticed my CPU was above 45 degrees and I at once checked into my system and found that there was some dust on the cpu heat sink, so I removed the heatsink and fan and blew the dust off of both re-applied heatsink compound and remounted the heatsink and the temp fell by almost 15 degrees at once to low 30 degree range. My computers runs 24/7 so is best to do a little preventive maintenance once in a while or you could be sorry.

Pros: Value for the money is outstanding! It overclocks reasonably well, too. Mine is running in an MSI 790FX-GD70 with a Noctua heatsink at 3.12ghz and is Prime95 stable after 15+ hours after a few voltage tweaks on the mobo. Cool n Quiet works great with OCing, as well. Mine downclocks to 960mhz when not under load and temps drop from 42 celcius under load to 20 celcius at idle. Awesome!

Cons: Not an unlocked multiplier, but I knew that going in and am completely OK with it given the price.

Cons: Stock cooler is OK, but if you plan on OCing, get a serious HSF.

Overall Review: Don't pass this proc up because if the 4MB L3 cache "limitation." On the Asrock A780GHX/128M (and on other mobos, I suspect) you can enable the additional 2MB of cache in BIOS and have all 6MB!