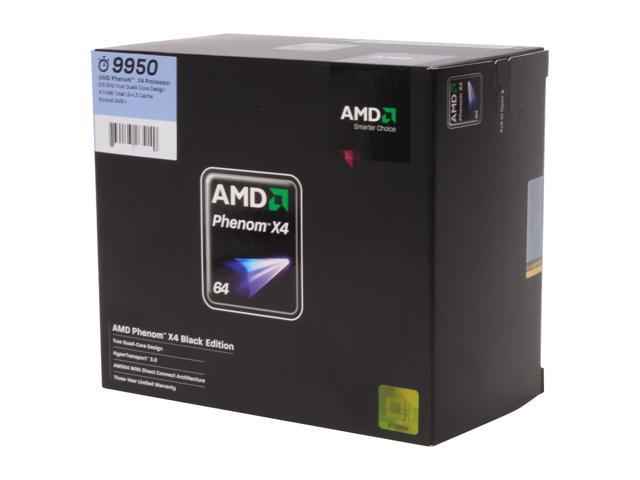 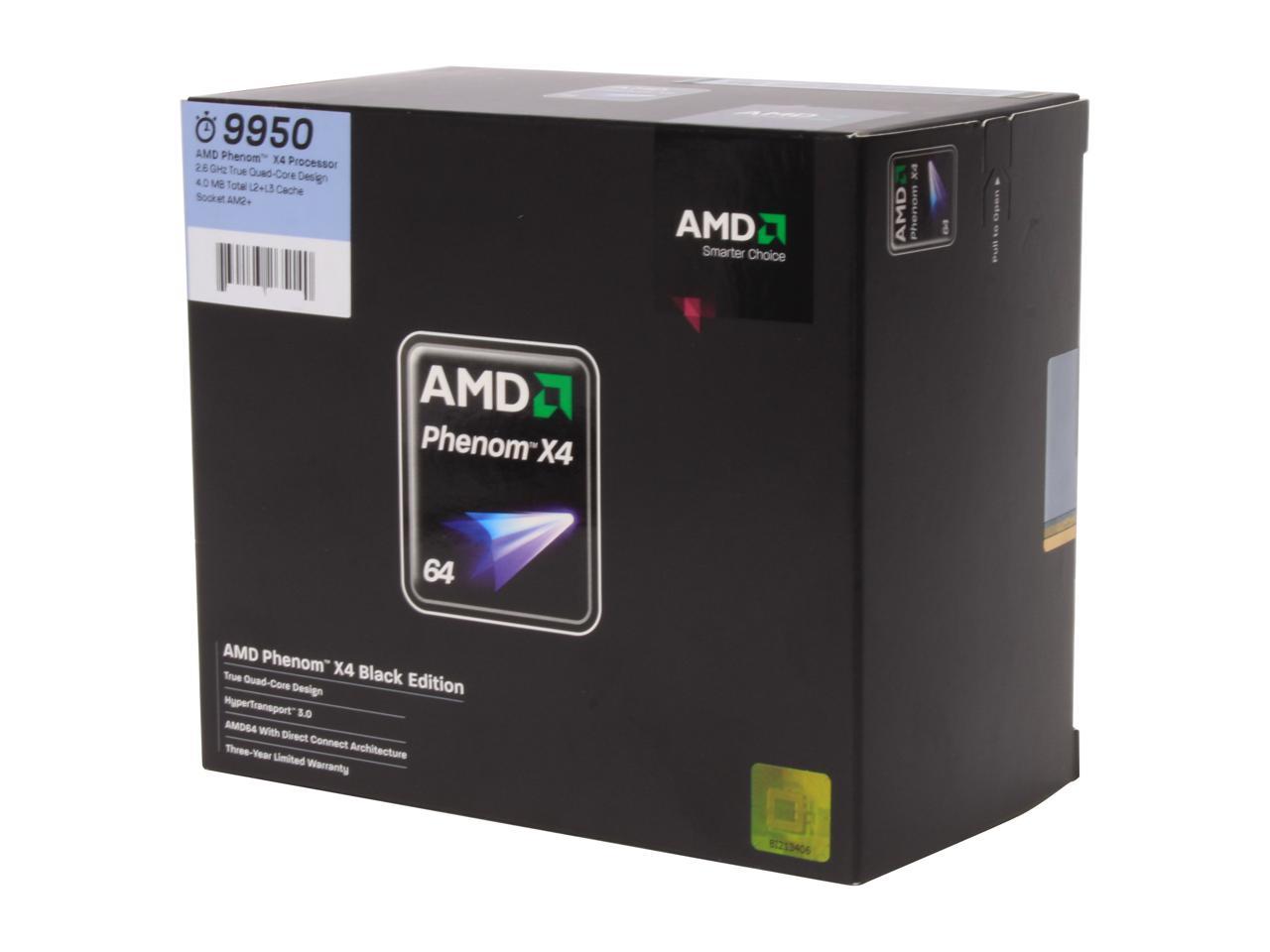 (594) Write a Review
OUT OF STOCK.
Overview
Specs
Reviews
Like the superheroes of old, the AMD Phenom streaks out of the night to lay waste to your enemies. The 9950 Agena has 4 cores that run at 2.6GHz. The quad-core Phenom processor has 128KB L1 and 512KB L2 caches for each core and a total of 2MB L3 cache to buffer really heavy data flows.
Memory transfers get faster than ever. HyperTransport Generation 3.0 mode allows up to 16.0GB/s of bandwidth. Add that to the 17.1GB/s from the integrated memory controller for an amazing 33.1GB/s of memory bandwidth. This unprecedented bandwidth is needed to feed the data hungry AMD64 with Direct Connect Architecture cores.
You'd think that all of this power could get too hot to handle. Think again. AMD's Cool'n'Quiet 2.0 technology works with CoolCore Technology to minimize heat while keeping power and efficiency up. Now the cores can shut down unused parts of the processor when not in use. This saves power and helps to reduce the amount of heat generated. This function is built in so there's no need for drivers or BIOS updates.

Learn more about the Phenom 9950

Pros: do not let poor reviews ruin an awesome product like this. I overclocked my 9850be to 3.5 until heat became an issue, that was also on air. i recently switched to a h2o rig which produced 20c less full workload. World record with a 9950be 145w was 3.9. now 20w less....u do the math

Pros: I took this cpu to 3.0mhz off bat by raising the multiplier to 15x200 at stock voltage (1.30). Was able to achieve 3.1mhz with nothing more than a slight power bump of 0.125 (3.125) and raising the multiplier to 15.5x200 . It gets better. . .This thing idles for me at 20c in my basement with the use of some thermal compound and a zalman 9700 cooler. Biggest load so far has been 39c. I feel like I can get this cpu to 3.4 pretty easy, but im satisfied with my results thus far. Everything runs at break neck speeds yet stays cool. I am a very happy customer :). Thank you newegg for the on time delivery and keep supplying the deals!

Cons: Deneb right around the corner. . .but let the first wave of that get out before jumping in :).

Pros: 4 cores with unlocked multiplier... i used the stock heatsink t6o OC this thing to 3.1ghz per core right out of the box. way to go AMD. nice to see copper heatpipes in an oem heatsink. low power draw is a definate plus. i cant seem tio get my system to hang with this cpu. great upgrade from my athlom 64X2 4200+ wish it had 3.5Mb l3 cache like the phenom X3's o well its FAST.

Cons: it didnt come with a larger heat sink.. o well thats what aftermarket heatsinks are for.

Overall Review: next purchase is for a liquid cooler .. lets see if i can get this to 4ghz

Pros: Mine hit 3.0ghz without activating ACC. Didn't try for higher since 3.0ghz was my goal and I didn't want to push it to its limits. Coming from a B2 stepping 9600BE there was a very noticeable difference in performance at stock speed. Now that I'm running at 3.0ghz, getting this CPU feels more like a major upgrade than an incremental one.

Cons: None. It runs all my games and applications without a hitch. I could not ask for more out of this CPU.

Overall Review: Being an AMD fan has its ups and downs, but I have never reached a point where I couldn't get enough performance to satisfy my gaming needs. My system: CPU: AMD 9950 125w, RAM: 4GB Muskin Ascent 1066 MB: DFI 790FX M2RSH GPU: Powercolor 4870 1GB

Pros: Nice default clock speed. Unlocked multiplier and also came with a very nice copper core cooler which was a great plus, normally black edition cpu's from AMD dont come with one. :-) In my opinion the cooler is great. Upon boot, 28c 10-15mins after load 32c idle and have yet to see anything over 40c with a heavy load @ 3.0ghz

Overall Review: Small Tip to those running this chip w/ ddr2 800 @ default speed...After a few tests I found that downclocking my ram (gskill ddr2 800) to 400mhz gives a great performance gain due to giving the system a even 1/1 cpu/ram ratio also allows you to tighten up the timings. Im currently running 3-3-3-8-1T in dual channel as opposed to default 5-5-5-15-2T. I cant say for certain that you will see the same performance increase with 1066 ram since I dont own any but i would assume the increase would be even greater possibly allowing you to run it in CAS 2, Hope this helps you power junkies tweak your system for an extra boost =)

Pros: Top notch performance, and the fan that comes with it is more than adequate for some decent OC cooling.

Cons: "Hey baby check out my processor" has yet to get me a girlfriend.

Overall Review: What do girls know about computers anyway?

Cons: Will need to upgrade from stock heat sink in order to reach 3.0+ GHz.

Pros: Awesome cpu for the price It is AMD. Easy to overclock.

Cons: People who do not know what there doing, do not know how to install stuff, do not read instruction manuals, or use PSU's that do not properly power there system write reviews

Overall Review: The guy who reviewed this before me complaining the machine turned off and he thinks it is a defective cpu.. Well I can tell you now that his problem is his underpowered PSU. a 9950 quad core in a m3n-ht deluxe, all them fans, 2 8800 gt's, and all that on 550 watts!?? My system is almost exactly the same, but I had to upgrade my 550watt PSU to a more powerful one. The instruction booklet for the motherboard says if you want a high end ghx card you need 600watts minimum, and if you want 2 HIGH end video cards you need 1000 watts!