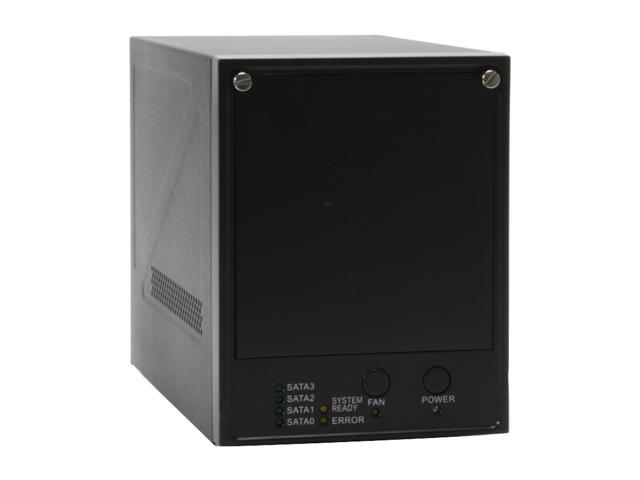 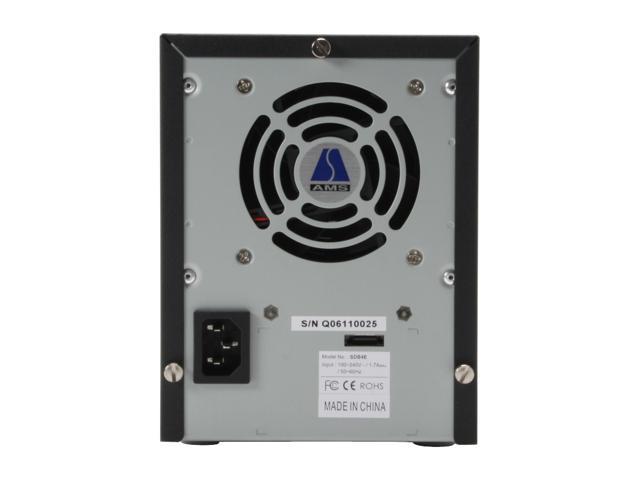 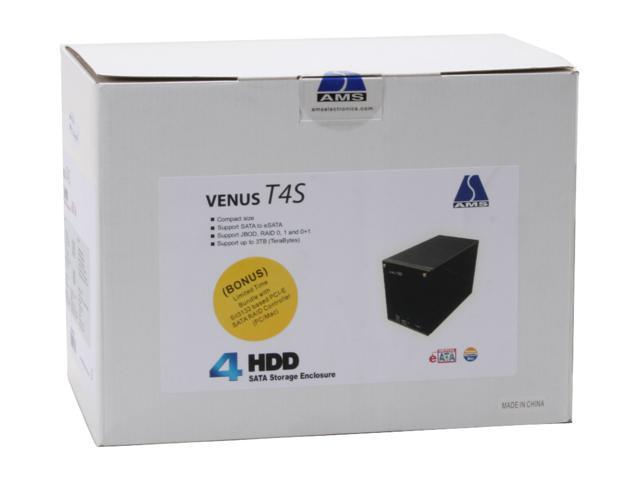 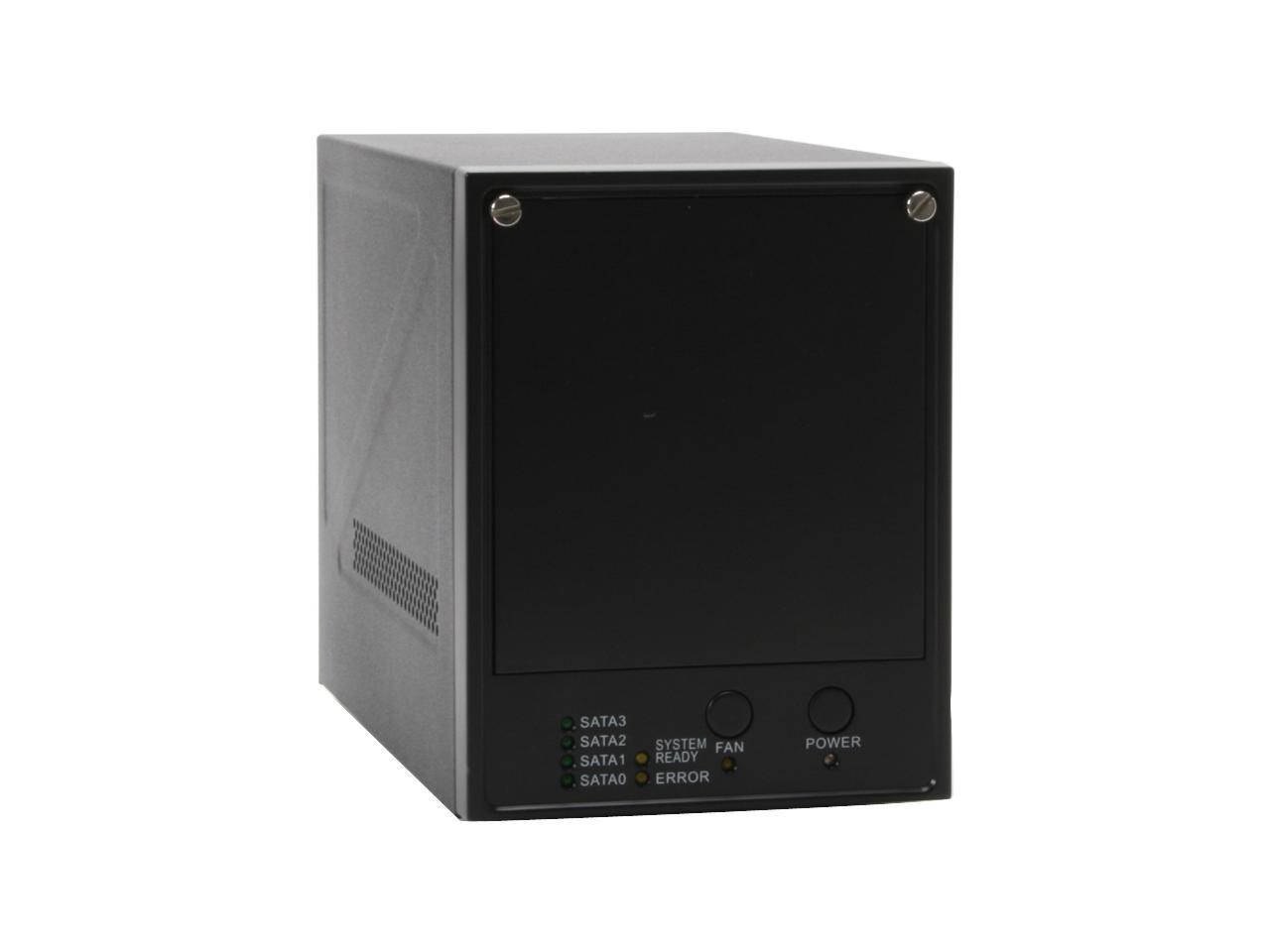 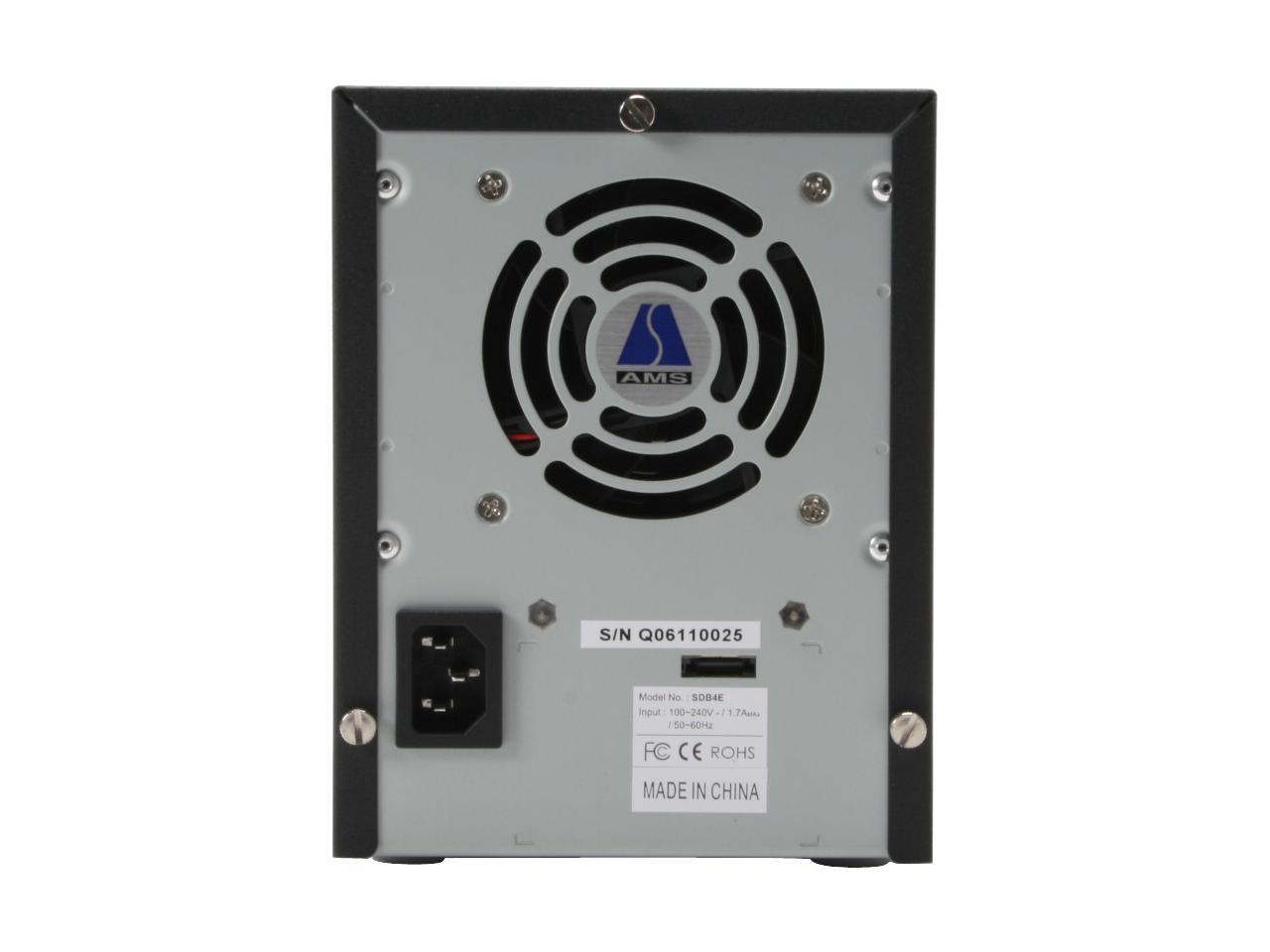 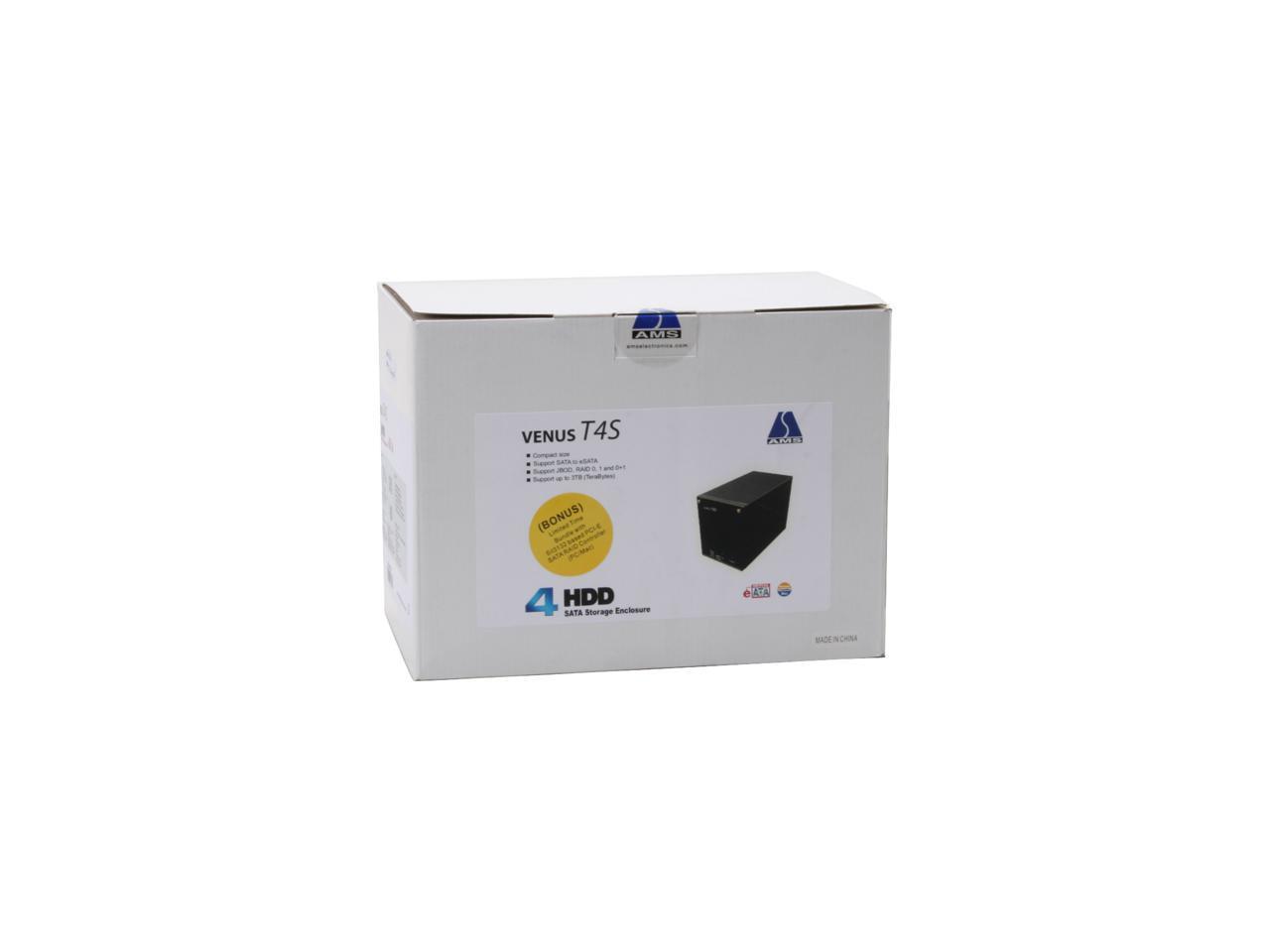 (38) Write a Review
OUT OF STOCK.
Specs
Reviews

Pros: Nicely made box. Comes with card and cables. SATA drives plug in with a satisfying click.The enclosure is tiny and heavy when loaded with four drives. I now have 2TB of SATA-II drives attached to my Fedora Core 6 system, woohoo!

Cons: Linux support currently (06/25/07) requires patches and kernel rebuilding. Latest kernel support is for 2.6.18. Once done though it works fine. The patches are to support the SiL4726 port multiplier. Without the patches only one drive (SATA0) is recognized. Blue LED is blindingly bright.

Overall Review: Don't understand the fan switch. What would happen if I turned the fan off?

Pros: It works as advertised. The configuration utility seems a little too DOS for me but it suits the purpose.

Cons: I'm a little disapointed at the fact that you can not update the firmware to allow the use of a 1.0TB Drive.

Overall Review: I did not notice any thermal issues with the three drives I am using.

Pros: I've had 3 of these for nearly a year now. This is a PM system. I use them with a Mac. They are hot swappable and support sleep mode. I use 3 1 TB seagate drives as a raid in one and 4 1 tb seagate drives JOBD in others and it works fine. I received very good tech support for my questions and one bad card, from AMS. I can't believe people have not picked up on how great this system is. No expensive trays needed, You only need a little frame for each drive which costs about $2.50 from AMS, the manufacturer, so I don’t have to spend $20 or more for a tray for each drive I want to use with the system. The fan can be turned off separately from drive power, for times when you are not using the drives intensively and want extra quiet. The fans are pretty quiet anyway. The PM SATA card they include works perfectly. Sometimes for extra cooling when using it intensively in RAID, I leave the front off if I feel I may be over taxing it.) I use Seagate drives to get 4 TB.

Cons: no usb connection, which I might need just in case i want to move the unit to a computer which does not have a PM SATA card installed, but I can live with this. Nothing else bad about this unless you think that being forced to buy Seagate drives if you want 4 TB is a bad thing. I only use Seagate as they have the longest warrantee.

Overall Review: On the Mac, this has presented me with no problems at all. You just have to install the latest silicon driv chipset, which usually comes with the unit. I also connect this box to my macbook pro via pci-express sata card and it works great - 8 external drives if i want that many.

Cons: weak fan, max hard drive size is 750 (unless its a segate?, then 1tb), poor directions and bad technical support

Overall Review: I wanted to put in two 1tb so they would stay cool, rather than cramming in four 500 or 750 GB drives, but the device does not support 1TB for most drives. I had to call AMS to find this out and they could not supply any documentation about the 1TB hard drives supported.

Pros: Compact, reasonable sound level, and easy to use. The plastic rails that you attach to your HDs are simple but work. The system reminds be of using scsi backplanes on a server, but is easier with just the rail, no tray. Fan switch is separate. Allowing you to turn it off if you have the case open and just a couple of disks inserted.

Pros: Excellent quality. Very easy to install drives. Using 2 WD, 1 400GB, 1 500GB, and 2 Samsungs, both 500GB. Not using as raid. All I had to do was install the drivers for the card. Other software was not needed for JBOD.

Cons: Instructions leave a bit to be desired for the Silimage drivers. Finally let Windows find them on the net. When trying to use those on theCD, it did not recognize them as a driver. Even though pointed to.

Pros: Easy to install. Ran great for about a year.

Cons: The unit suddenly disappeared off my system. After testing each drive with seatools and confirmed all four are in good working condition, I called AMS tech support. Tech support has very limited knowledge of the software they package with the system. AMS tech support could not recommend steps on how to recover the configuration information for the units raid config file. They kept reading the manual to me over the phone. No in depth knowledge of the product. Be aware, if something goes wrong you are on your own!

Overall Review: I would have given the unit a 4 or 5 rating if the company had competent tech support.

Pros: does what it promises (kinda, see the cons), if you know how to navigate the driver jungle. yes, HD trays are dumb - look at what icyBox did with their screwless/trayless external enclosure. on this one there's no trays, but plastic guide rails that you do have to attach with a screwdriver - & not lose before you need them.

Cons: you have to know what you're doing to get it configured right. yes, it does raid0 & raid5 with 3 HDs, contrary to what some reviewer said below; but you can only configure it like that if you have the raid firmware on your interface card & use the SataRaid5 java app, not the plain vanilla steelvine one. documentation is lacking - would've been better to just send the user to the SiI site to figure it all out - one has to go there anyway for the latest drivers/firmware. either there's no temperature sensors inside, or the software doesn't read them correctly - i get the same 0C/32F reading as someone else here had. it doesn't run hot with my 3 HD setup, though.

Overall Review: this is a steelvine 4726 implementation - raid on the cheap. i spent hours trying to find a test that would give me real life performance data beforehand. didn't. now i know, and would be happy to share the HDtune graphs if newEgg let me upload pics. but here's a summary (3 1Tb Seagates in the box, 2.5GHz core 2 duo laptop, SiI3132 esata card): raid0 - with 3 drives the peak speed is less than a single drive would achieve, but expectedly, the performance holds up across the space & gives better sustained throughput. 75Mbs avrg / 9.7ms access raid5 - abysmal 15Mbs avrg / 9.8ms access - e.g. you get the redundancy, but the volume is so slow that it can't be used. i doubt this would get any better if i threw in a 4th HD. i'd buy a REAL raid card with IO-processor & buffer memory if i could fit one inside my laptop, but that'd throw me back at least twice the price of this whole box - & it doesn't exist. for now, this will have to do - i don't want a big box.