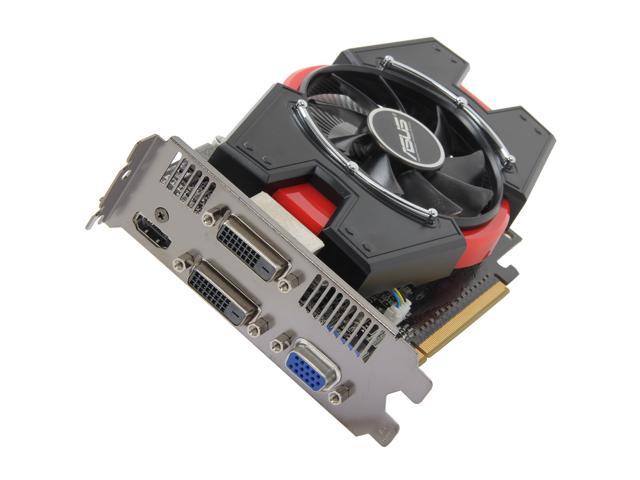 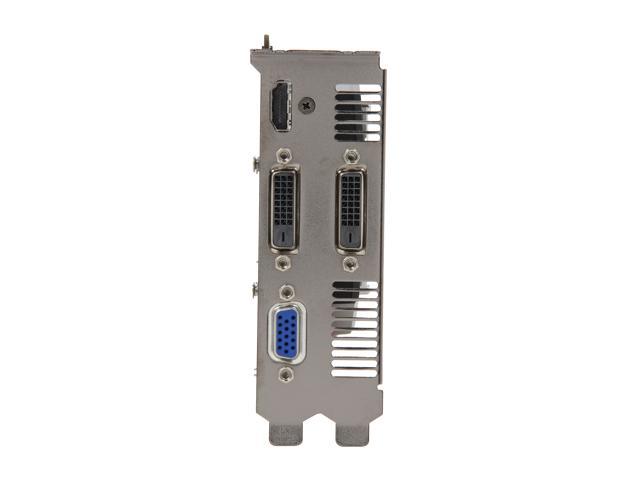 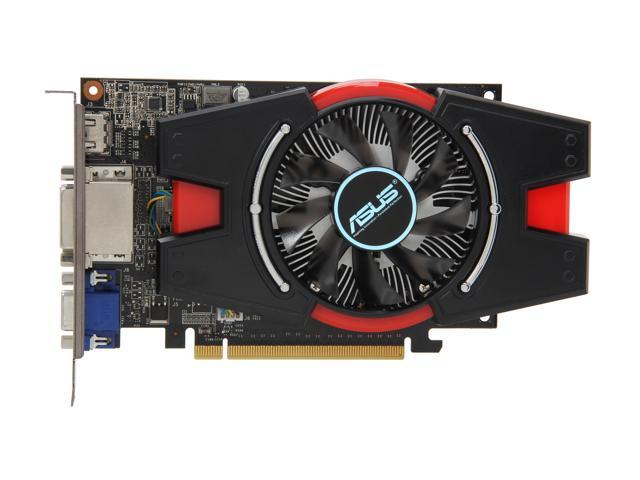 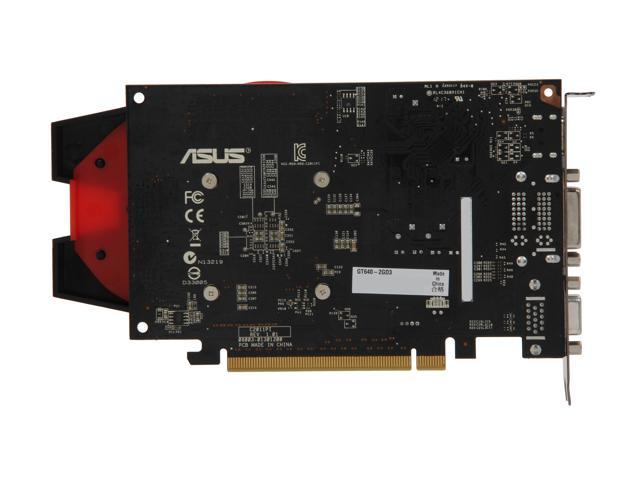 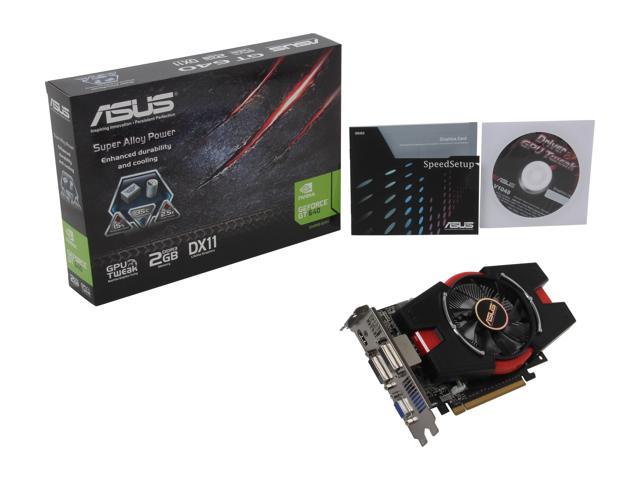 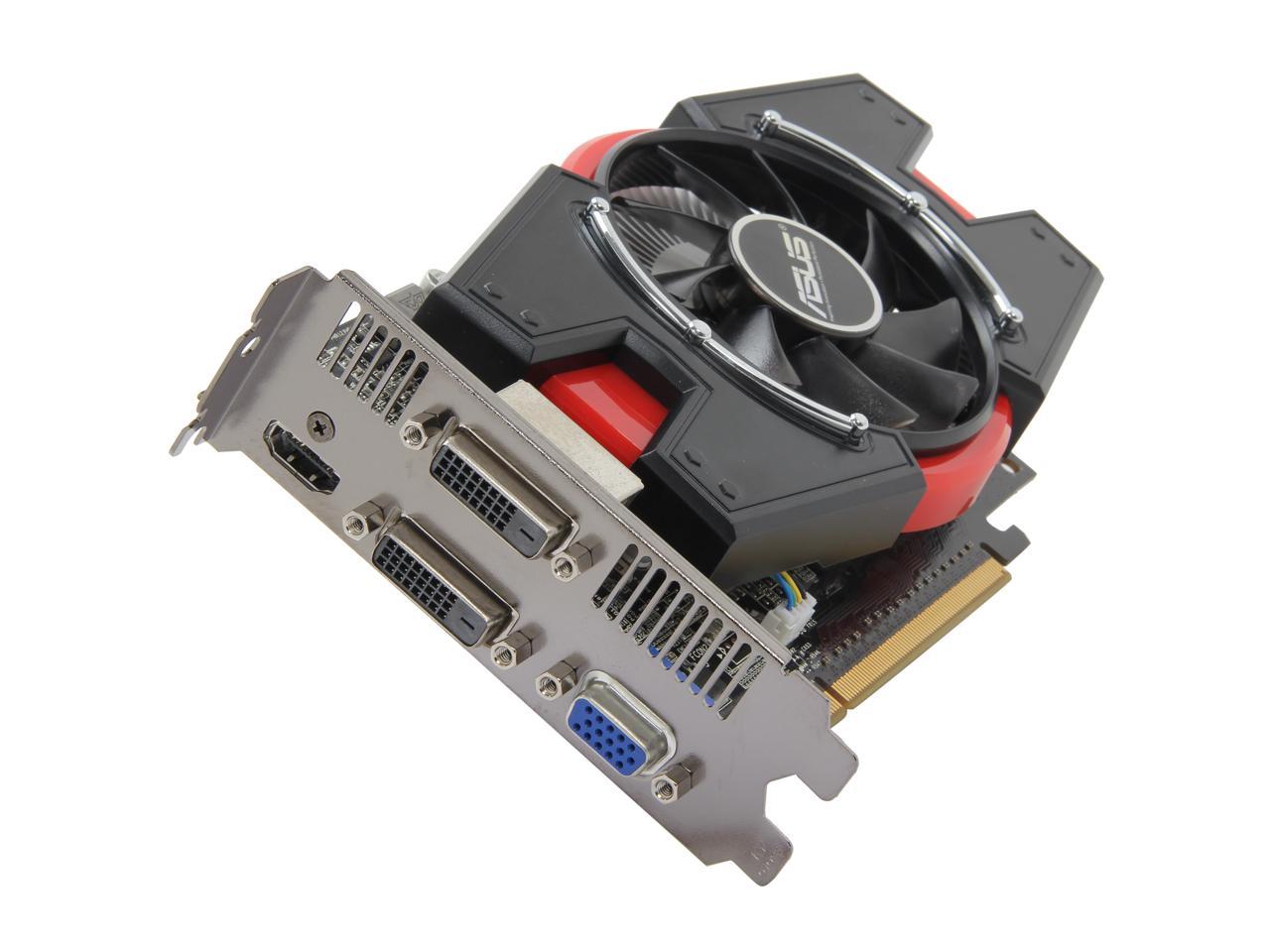 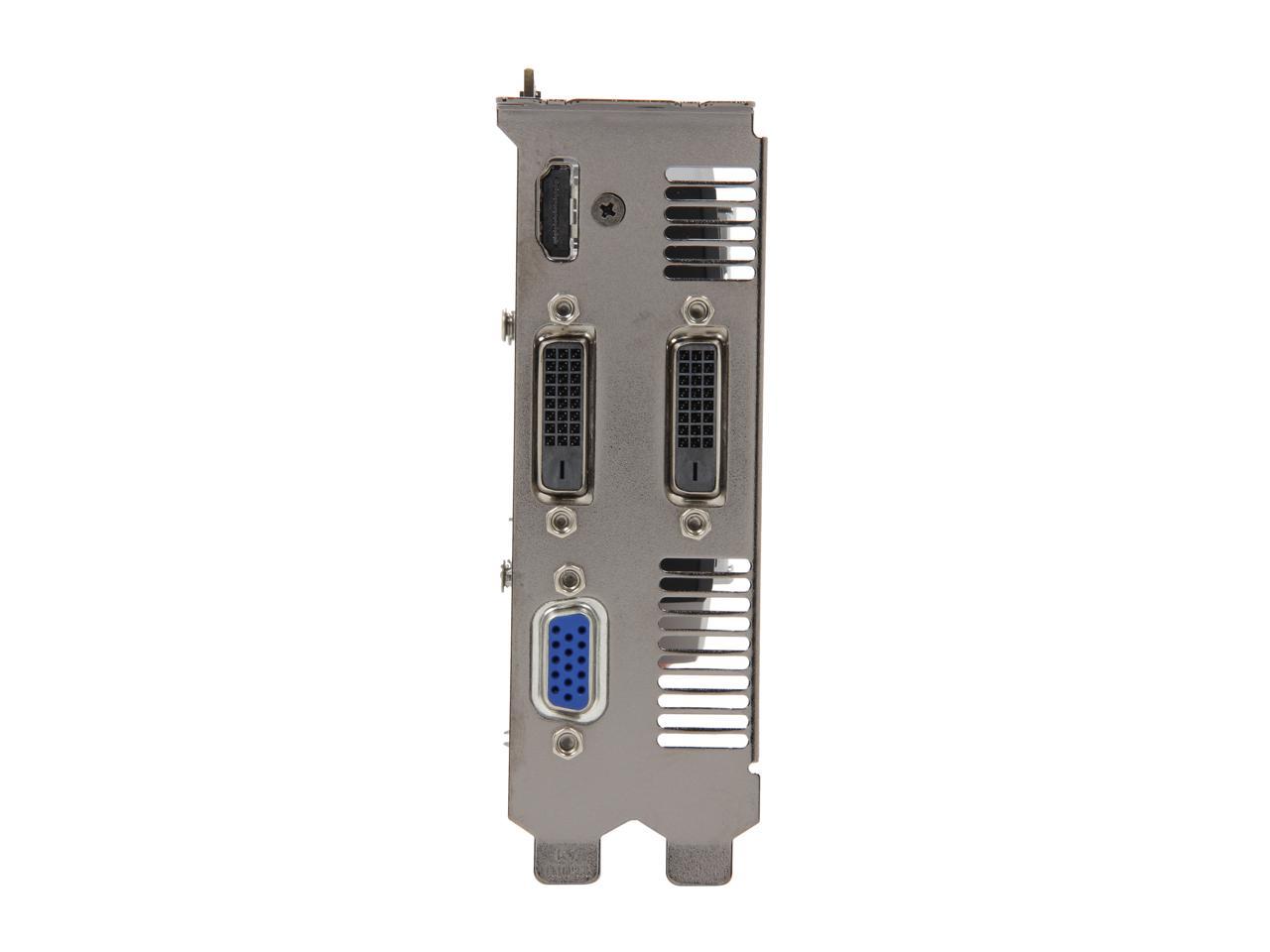 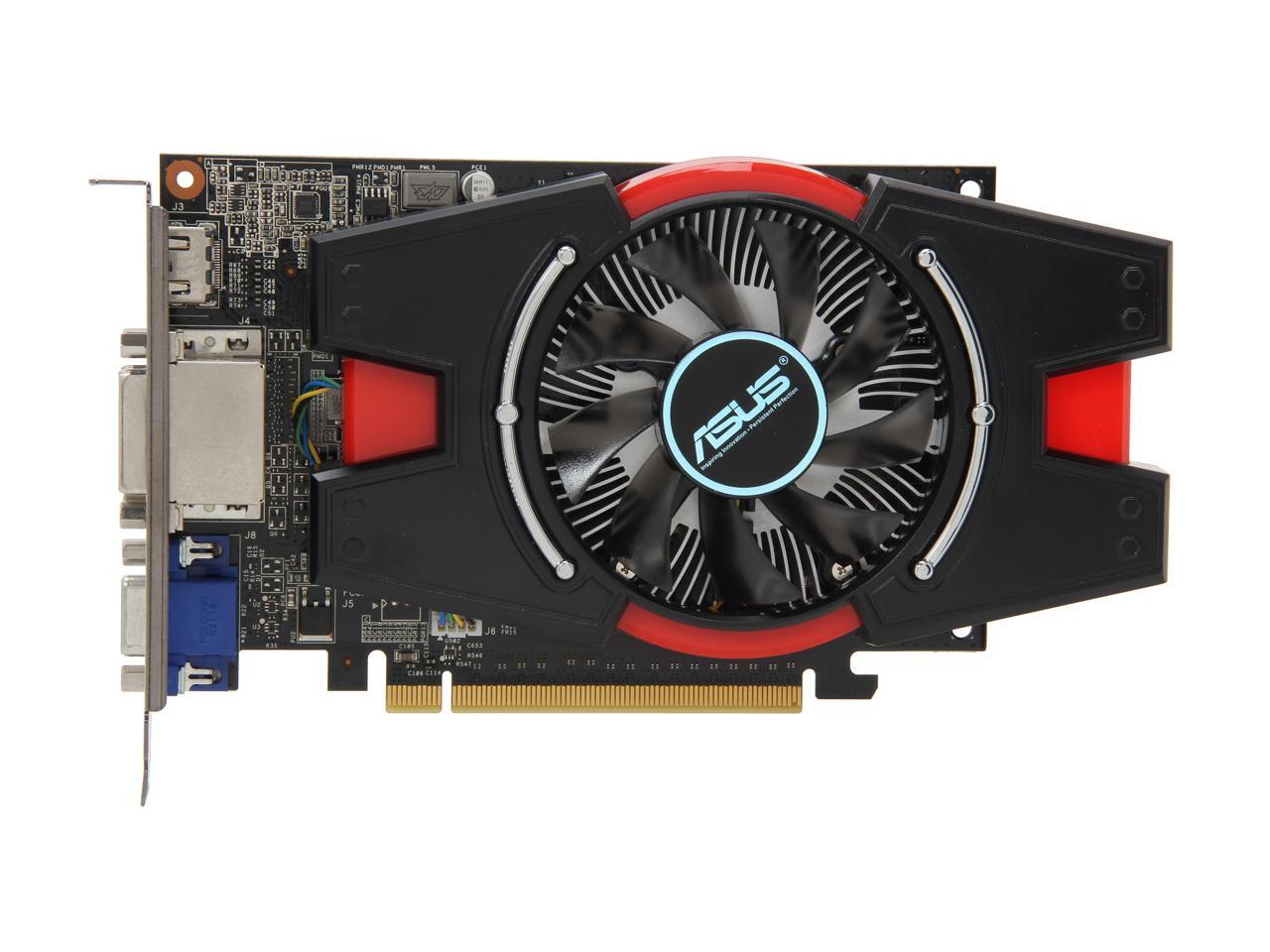 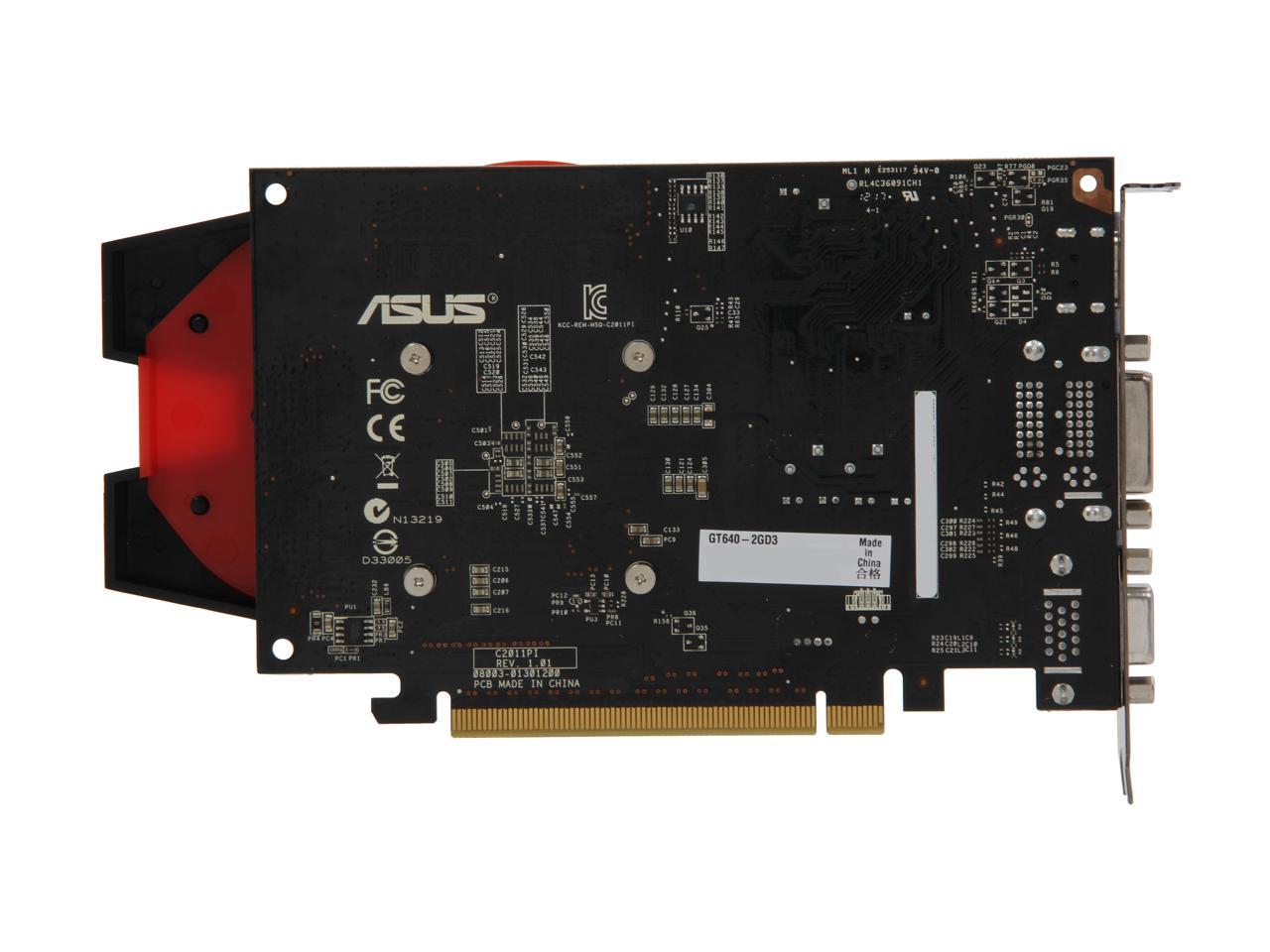 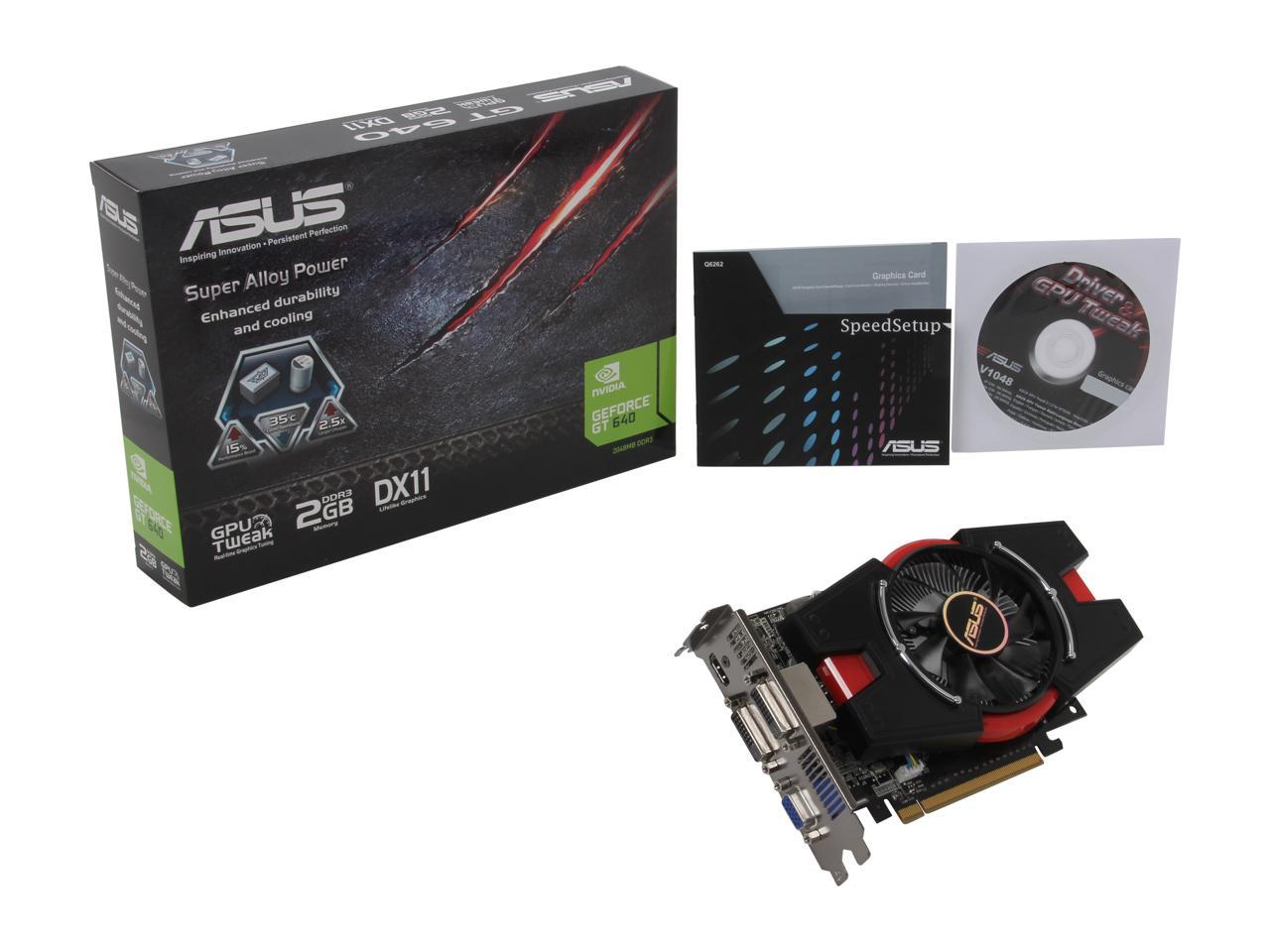 Enjoy the power of NVIDIA 28nm Kepler architecture for a new level of gaming enjoyment in the latest DirectX 11 title, with the ASUS GT640-2GD3 graphics card. This GeForce GT 640 VGA card renders mind-blowing lifelike graphics and immersive 3D game like you have never experienced it before. An assortment of NVIDIA technology such as NVIDIA Adaptive Sync, NVIDIA Surround and FXAA Anti-aliasing Mode offers you more than one way to elevate your gaming experience. The sophisticated ASUS design including super alloy components and dust-proof fan ensures best in class durability and reliability for trouble-free gaming even during the most demanding environments.

Cons: Not sli capable but knew this going into

Pros: Four different output jacks (2-DVI, 1-HDMI, and 1-D-Sub, which can all be used at once to run up to 4 monitors. The card performs all HDCP functions perfectly. Videos, movies, and even photos, look richer, and have better color than with my old GTX430 card. As far as gaming with this card goes, I use only MS-FlightSim-X, and MS-FlightSim-2004, and it works great for both, producing frame rates in the high 60's and up, with all program settings on high to ultra-high. This card so improved the FS programs, that I am now recommending it for FlightSims as the best, dollar for dollar upgrade one could make. This card also does not require a large power supply. Works fine with a 400w unit. It also doesn't require additional power than what it derives from the PCI slot (no 4/8 pin power plugs needed!).

Cons: The fan, when running over 3200-RPM sounds almost as loud as one of the jets in the FlightSim programs I run. Fortunately, the fan almost never runs over 2200-RPM (and usually hovers around 1200-RPM), and is super quiet with everything but the most intensive gaming. The included "ASUS Tweak" software is a joke. There is no way to benchmark the card with the software so one can determine the best settings. Fortunately, Nvidia's Performance software (easily downloaded from Nvidia's site) does the job, and, in a far more professional manner than the "Tweak" software. One would think ASUS could produce better software for their video cards... One star off for the software.

Overall Review: This is one of the coolest cards I've ever owned. Temps doing everything but games, stay in the 32C to 37C range. Intensive gaming brings the temps up to the mid to high 40's. My old GTX430, routinely ran between 52c and 68c during gaming! Fortunately, because the card runs so cool, the large fan does not need to, and rarely ever does, run at high speeds, so overall, it's very quiet. I purposely ran the fan up to 4000-RPM, and it sounded like a jet engine, but, when not purposely induced, the fan never went past around 2500-RPM, and only during intensive use. A stock (not overclocked) WEI of 7.1 is not the greatest, but the 550TI cards only get 7.2, and cost more. Card can be easily overclocked. It also has 2GB of RAM. Even though it's only DDR3, it works great for this card's designed use and market position.

Pros: Can run 4 displays at one time* Good price for # of displays. Runs good on only 350 watt psu. good for older pc's good for general use

Cons: Seems to need windows 7 or above to run more then 2 displays at one time. Takes up 2 card slots. dvi are digital only outputs.

Overall Review: owned for about 5 months i have a dual core E5300 2.60 ghz cpu. 350 watt psu I have pci 1.0a This card is probably Bottle necked by my pc , YMMV In windows xp you will be limited to any 2 displays at one time. In windows 7 , you can attach and use up to 4 at one time (i have tested only with 3 )my 4th display is on order. I can run many games , but not everything. unreal , minecraft , killing floor , ut3 , call of duty etc all run ok. I can play minecraft and unreal across 3 screens with decent fps. I bought this card to give me more displays and to replace a 8 year old s300se radoen that was showing its age. in a attempt to keep this older pc alive a bit longer. I am happy with my purchase for what i paid.

Cons: Not the fastest card in the world.

Cons: does not support HDMI audio

Cons: Terrible card. I've had it for about 2 1/2 months now. I contacted ASUS and I sent in my card and they send it back "Fixed" but it continues to overheat it started about a week after I got it back just like it did at the beginning when I first bought it. Waiting for tomorrow to talk to someone from ASUS about the card again and send it back. Wouldn't recommend buying this card.

Pros: League of legends with amd a10 does 107 to 115 fps at max settings i like it for the price amazing

Cons: cant think of any

Pros: Overclocking and monitoring software is very nice and the fan runs quiet.

Overall Review: I got this card to upgrade my performance for EVE Online. With this card, I'm running 3 clients on full settings and they are all running smooth with no lag or artifacts. I'm looking forward to finding out what else it can do! :3