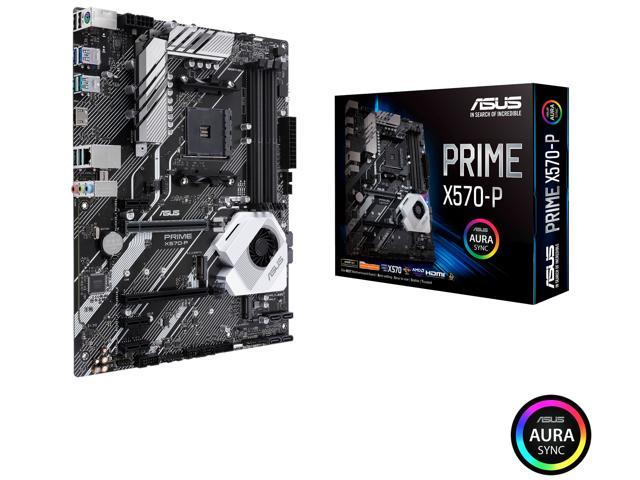 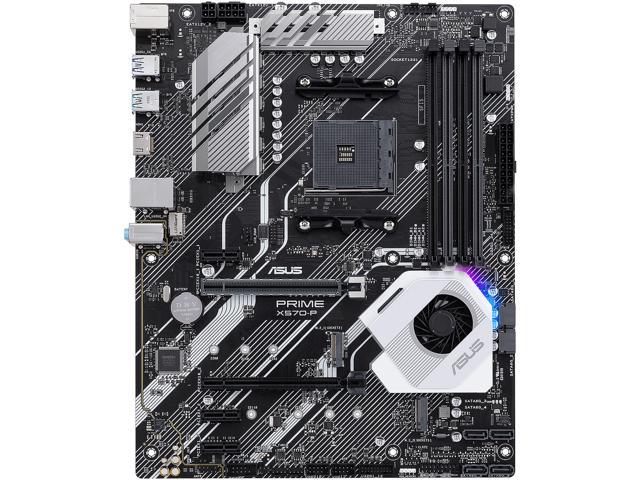 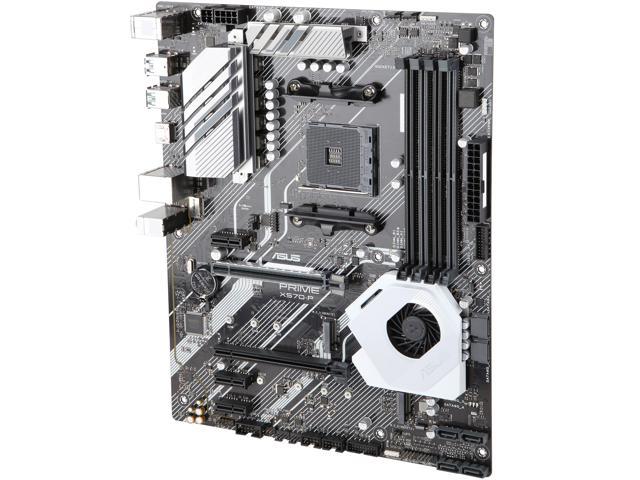 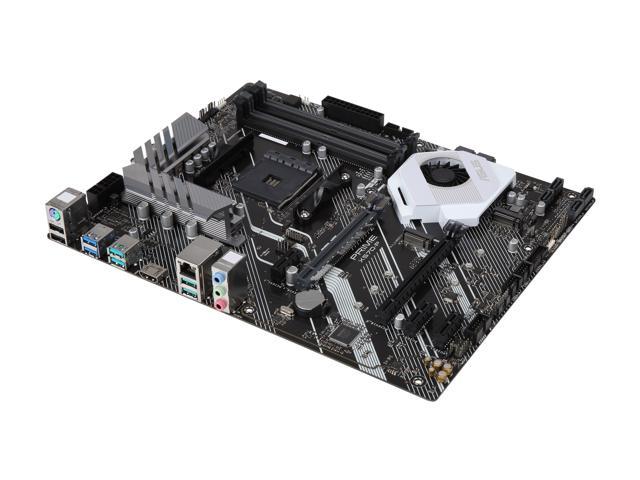 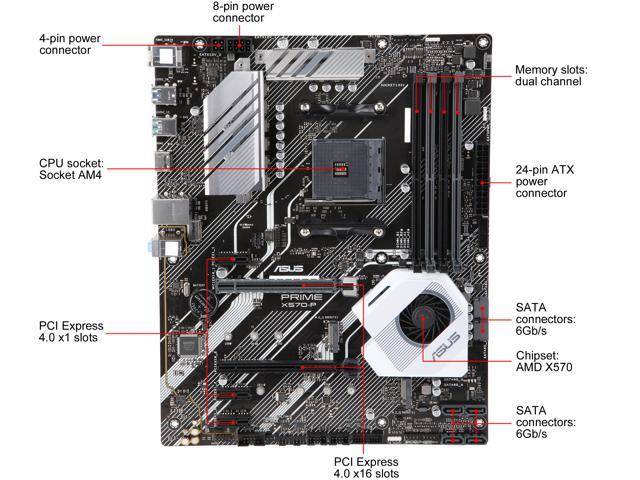 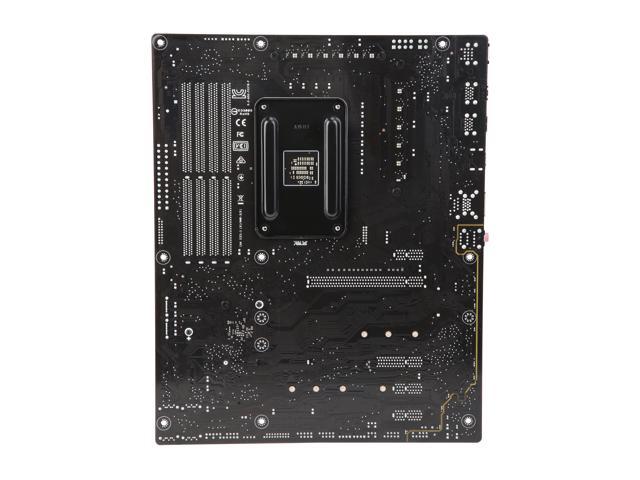 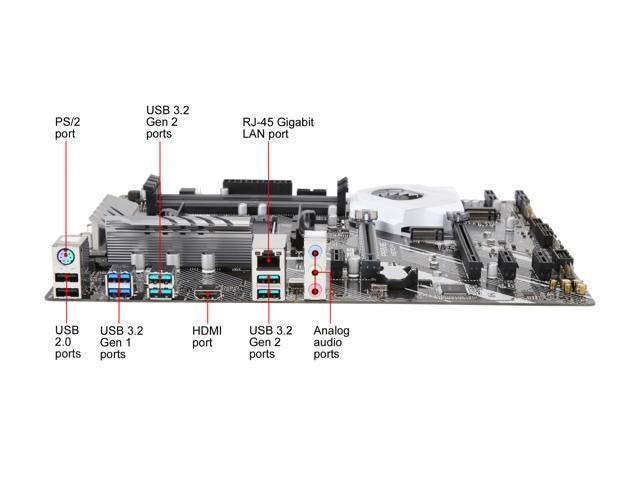 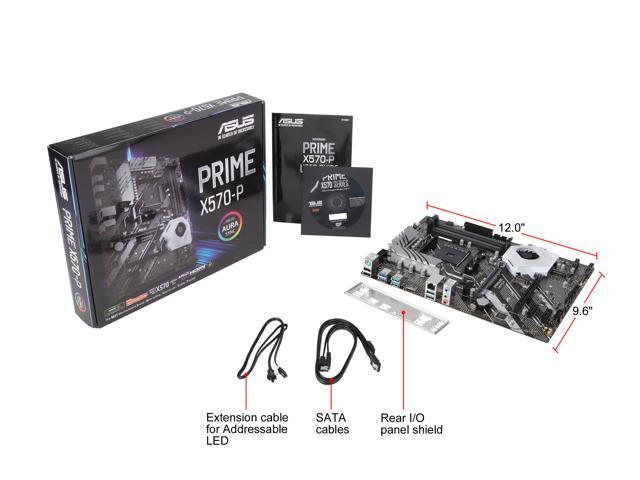 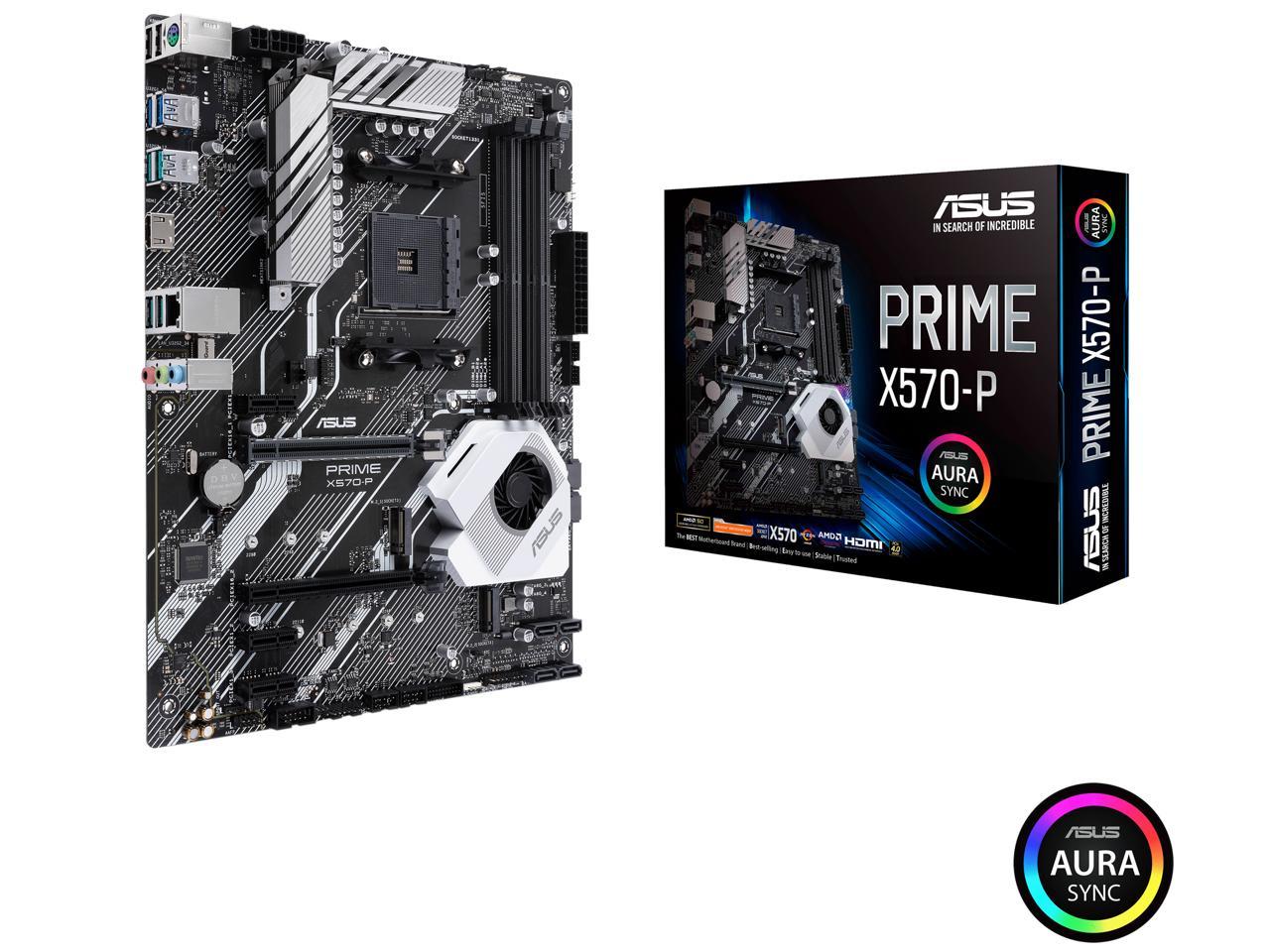 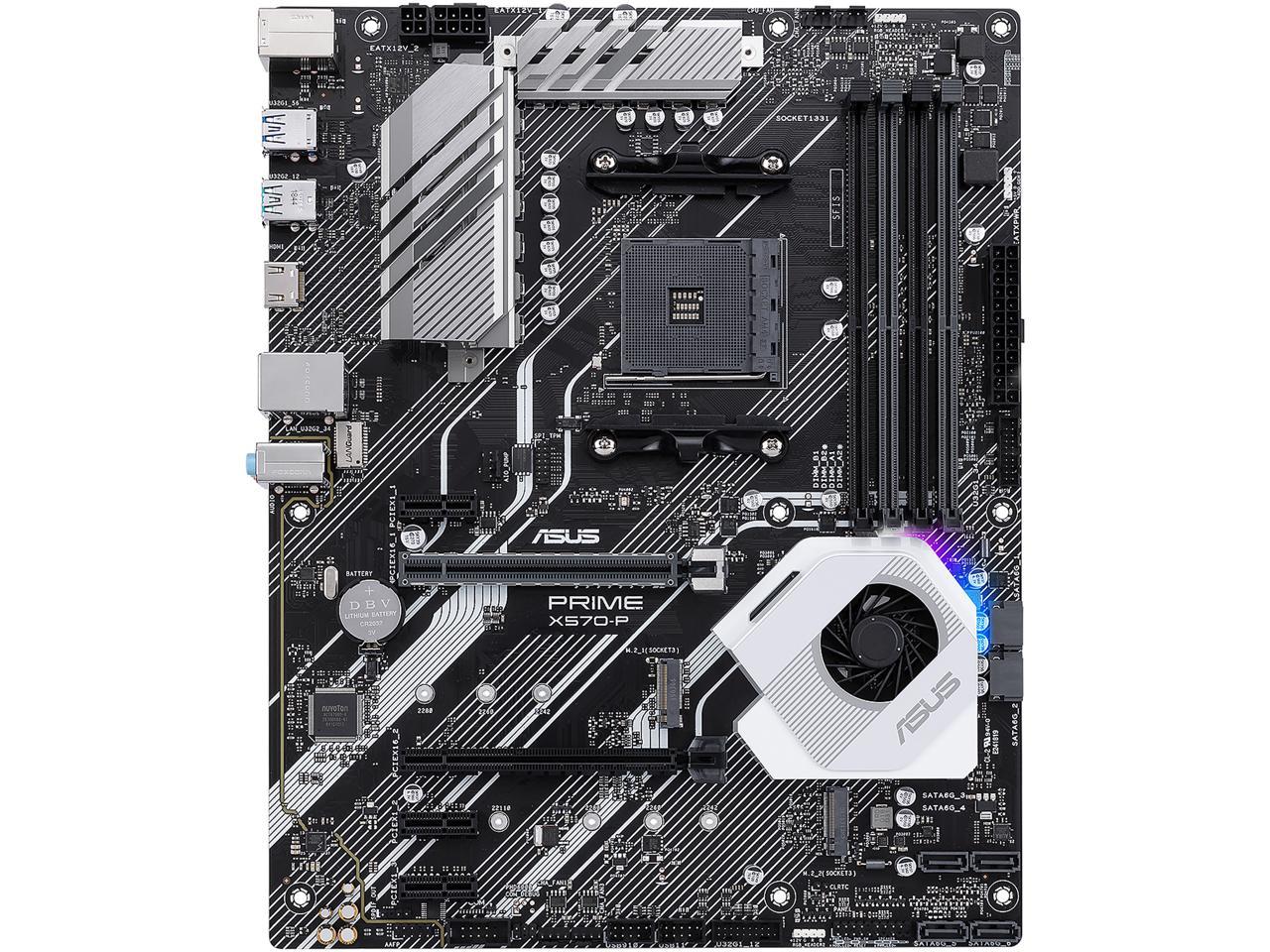 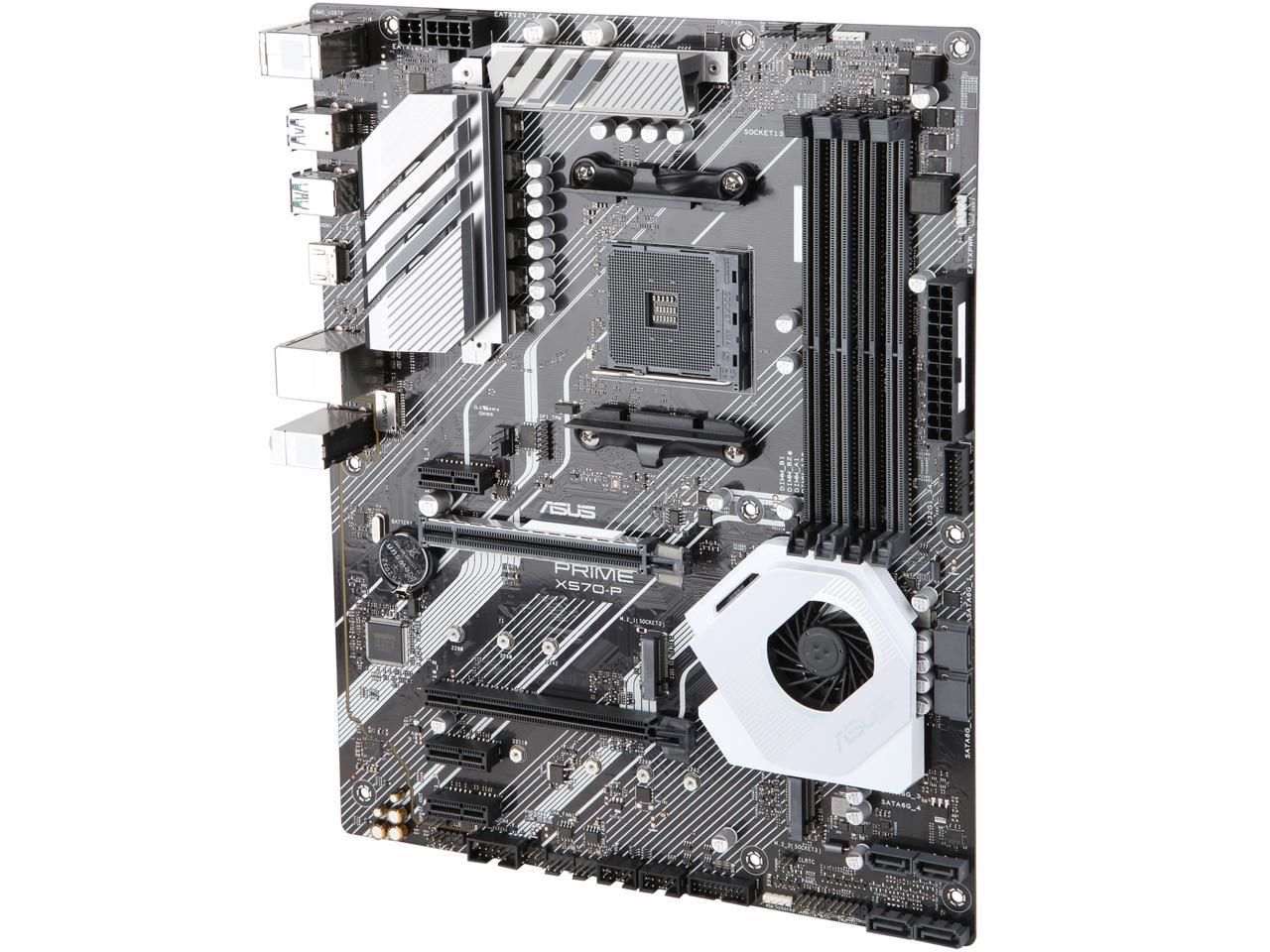 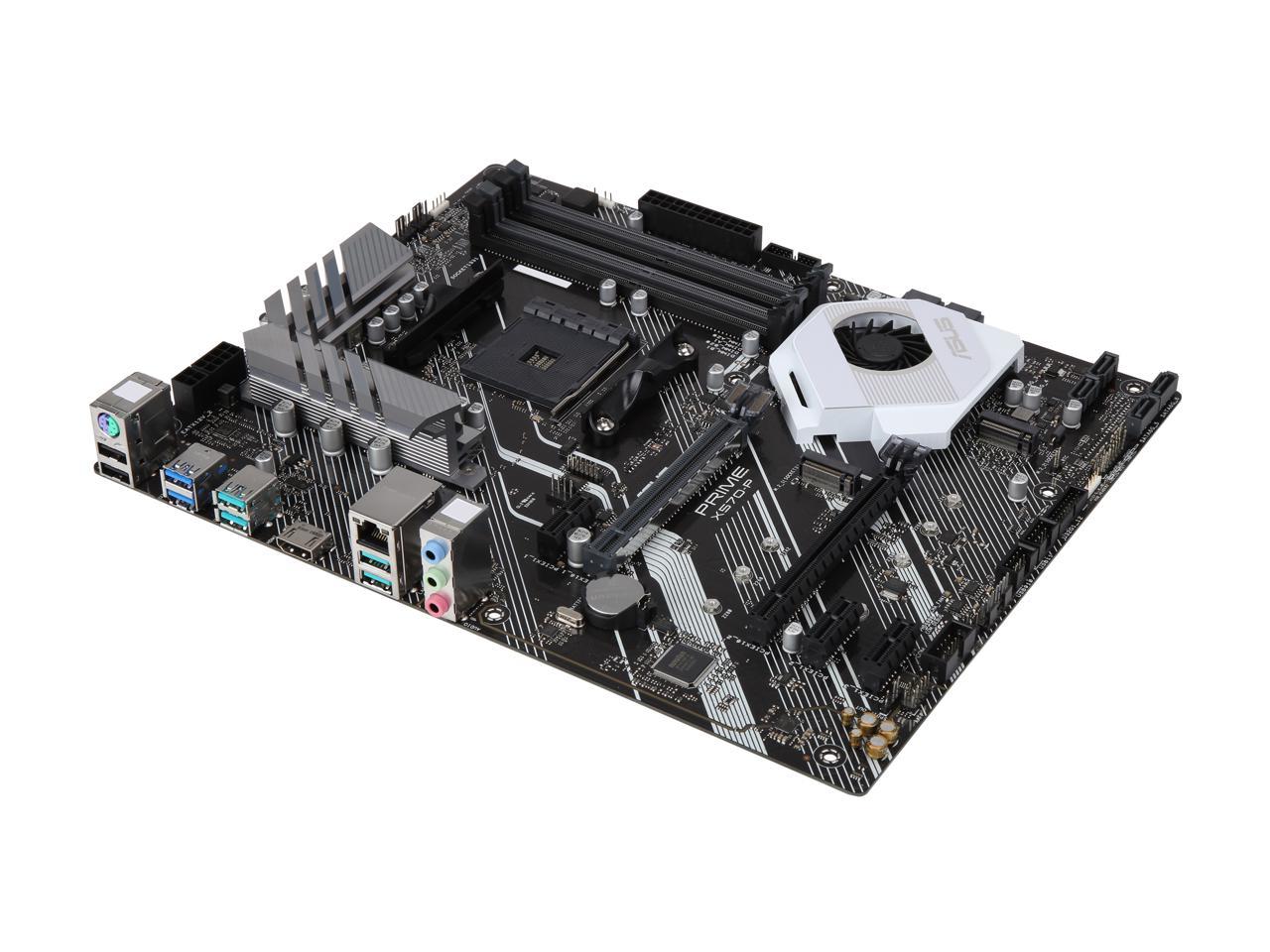 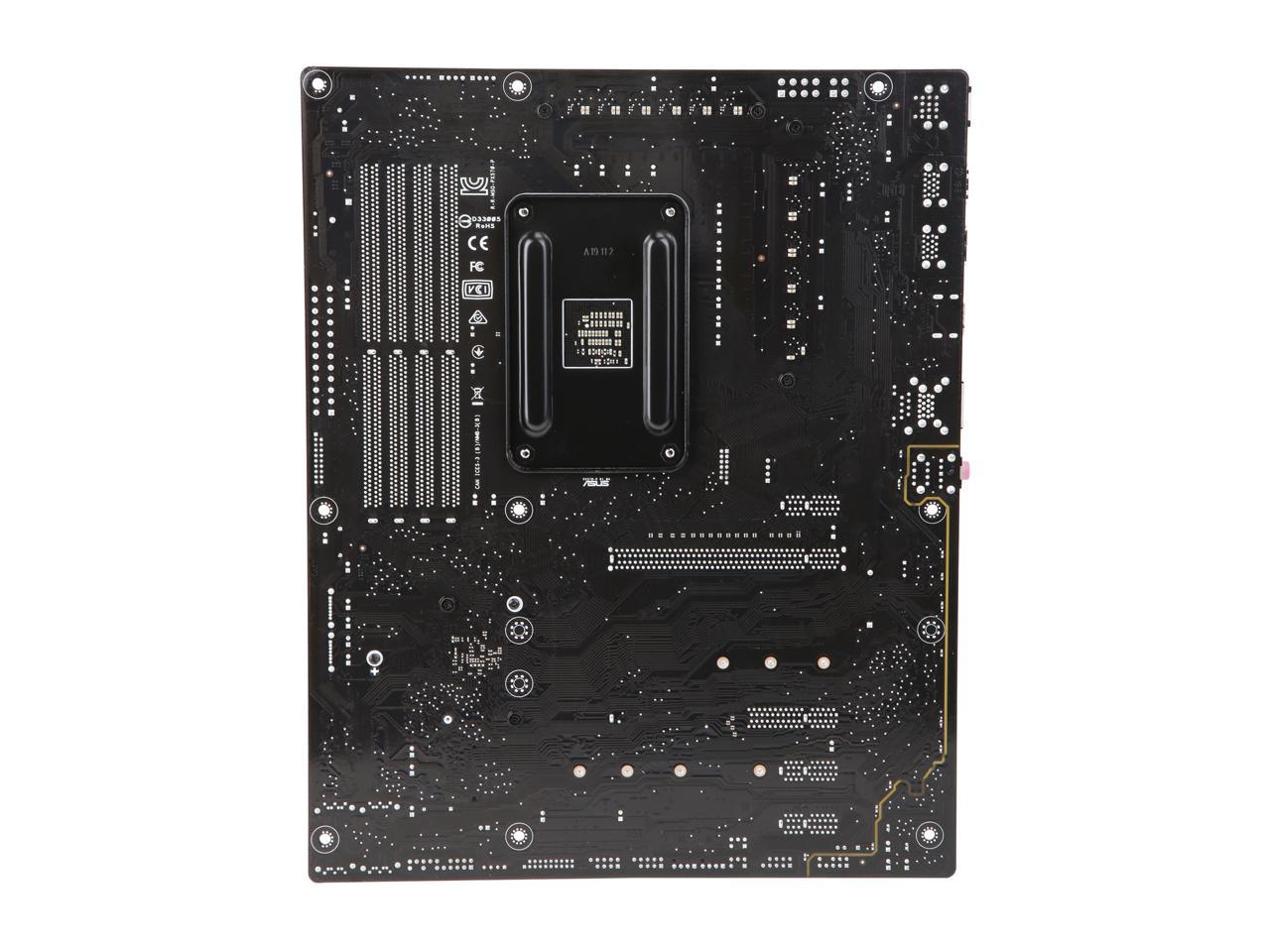 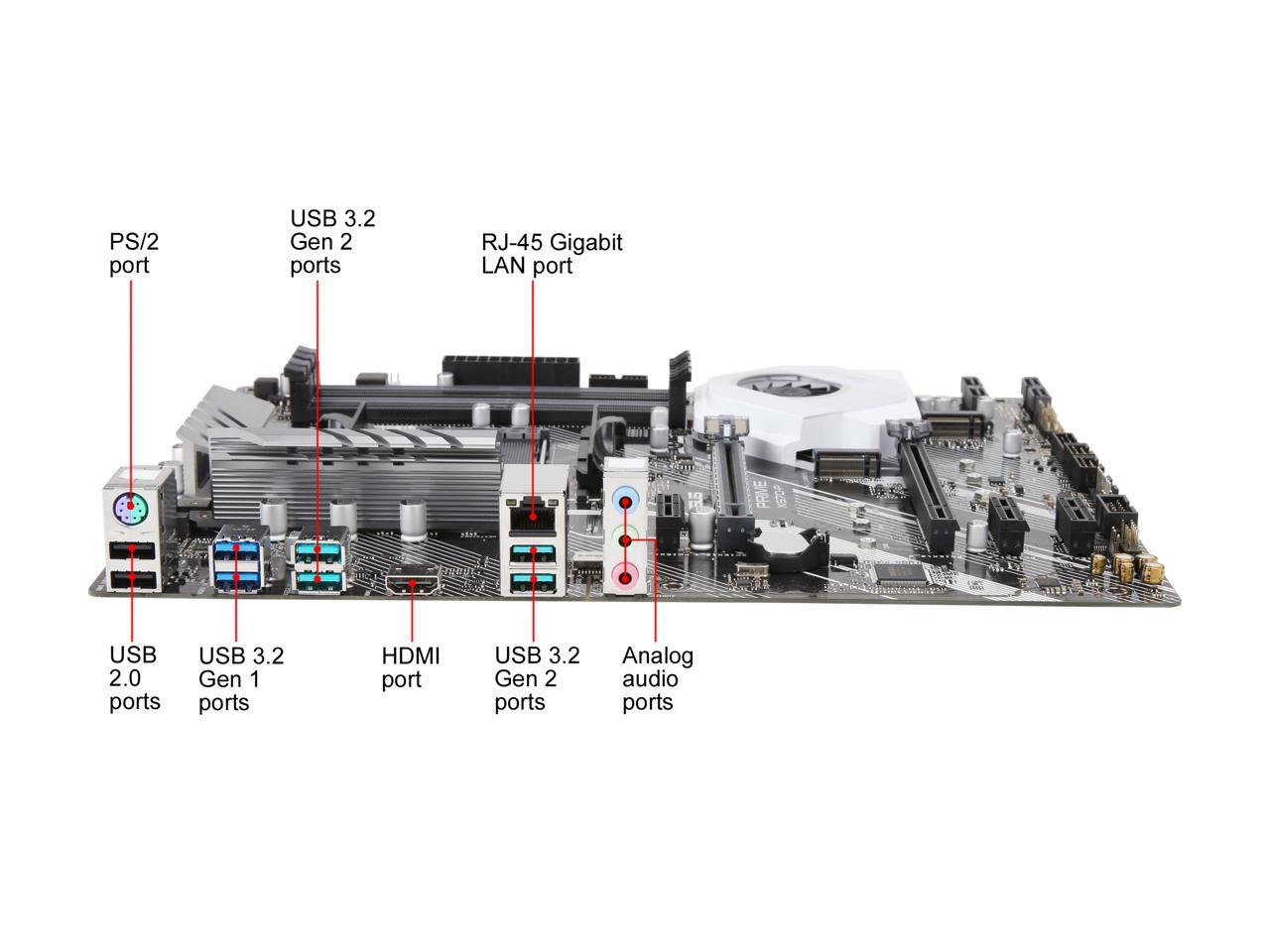 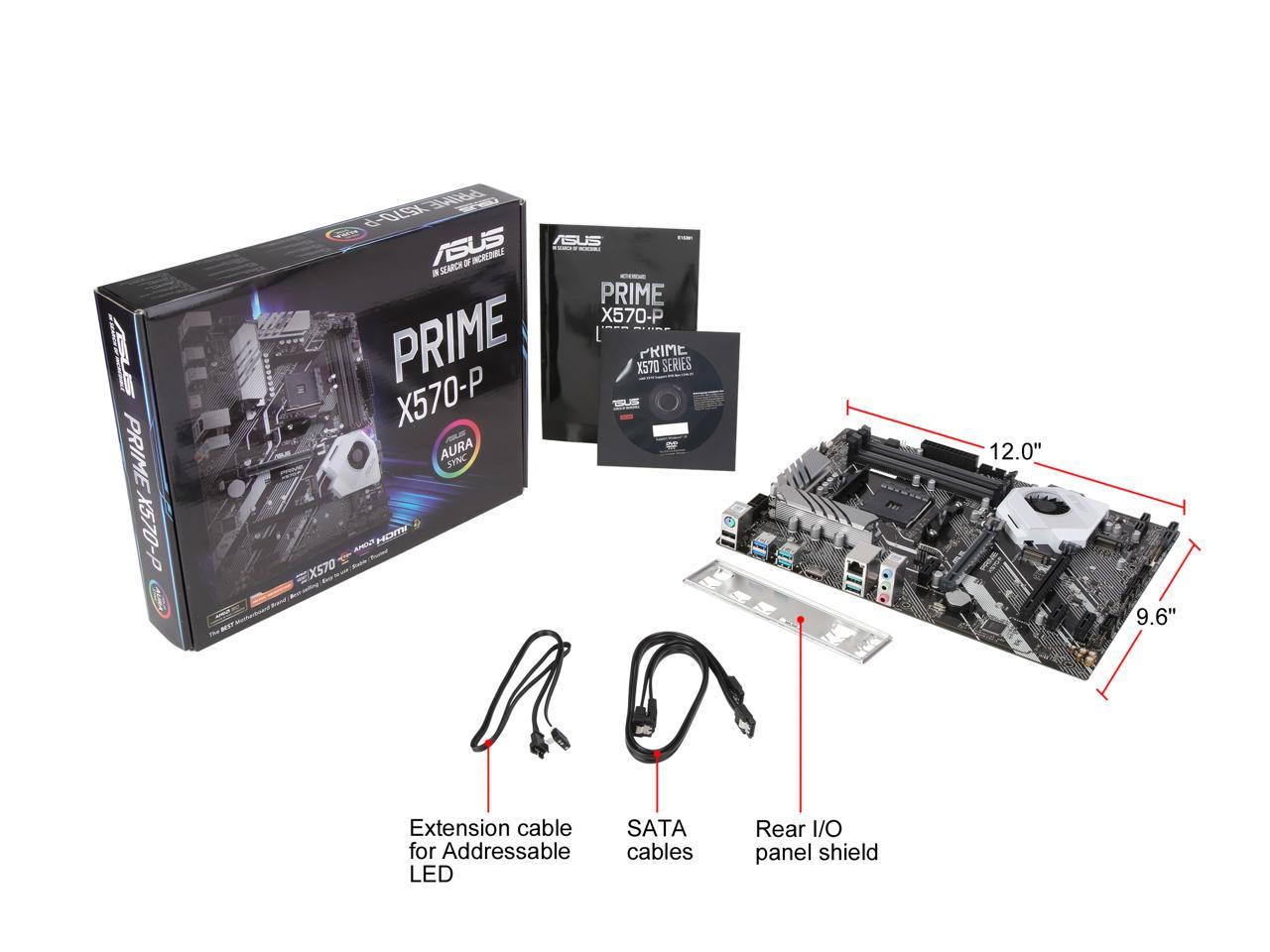 Pros: -Quiet south bridge fan, which has a plug under the heat spreader, so if someone wants to, they could probably disconnect, though I haven't bothered. -ECC RAM support, running in ECC mode via BIOS option -Looks better than in pictures (but still plain compared to other X570 boards) -Plenty of USB ports and expansion slots -4 USB 3.2, Gen 2 ports and 2 USB 3.2, Gen 1 ports, which is a lot of high-speed ports -No problems with setting up, manual is fairly clear too -Rock-stable (but, I expect that)

Cons: -Installed BIOS version was pre-July 7 (was stable, but flashing to newer BIOS took like 15 minutes!) -Audio panel on the back only offers three 3.5mm ports (enough for my 5.1ch audio, but not ideal and may not be enough for some people) -Rear panel is not cut properly and mis-matches motherboard ports by almost a millimeter. All ports work, but it feels dirt-cheap, looks awful and may cause problems in future with USB device plugging in. As it stands, it does work ok, though.

Overall Review: I recommend this board due to a plethora of ports - three PCI-E x16, though not all at full speed and lots of high-speed USB ports. It seems to use plenty of power phases according to some online reviews - more power phases than some other X570 MBs - and works perfect and stable with my AMD Ryzen 9 3900X. It supports a ton of BIOS settings in UEFI. Most importantly for me, it supports an ECC setting for my ECC DDR4, which needs to be enabled manually. For now, I haven't tried overclocking, as system is fast-enough, so can't comment yet on settings for O/C. BIOS took about 15min to update from USB 3.0 (USB 3.2 Gen 1) flash drive and I was concerned if power loss occured. It was ok though. Note that the rear panel (metal sheet) was very plain and when mounted, was sitting about one millimeter higher than my motherboard ports, so it looked like it would cause problems inserting USB devices, but for now all USB ports function when device is inserted. It does not feel professional and it is quite tight to insert USB devices - the metal panel scrapes lightly against USB metal port. I was concerned with the south bridge fan running loudly, as some motherboards have issues with that, but it was surprisingly quiet! I cannot hear it above my system fans, which are all Noctua NF-P12 at medium speed (regulated via my case). The Noctuas I have are not loud fans in the first place, so I feel like the ASUS fan is doing a fine job of staying quiet. Also it is way quieter than my Gigabyte nVidia GTX 1070, when that card is under Lightroom load (light load when applying effects). I should note that my case is under the desk, but basically there is no significant noise from the south bridge fan, which I am happy with. I run my 3900X cpu with Deepcool Maelstrom via AM4 bracket upgrade kit and 2 fans in push configuration. The CPU under gaming in Shadow Warrior 2 reached about 77 degrees, which is fine by me. Keep in mind again that my fans are all on medium speed, not their fastest speeds. Some people have concerns over arrangement of PCI-E nvme ssd under x16 port, but for me it seems to be a non-issue. My nVidia GTX 1070's 2-slot cooler of GPU doesn't extend over the nvme drive when installed and while more clearance could be better, it is going to be fine as is, in my opinion. Sound ports are enough to plug in 5.1ch speakers without using front panel plugs. I installed audio drivers from ASUS site and switched windows settings to use 5.1ch configuration - all worked fine. Overall, all my fears (over chipset fan noise levels, clearance of NVME SSD drive under GPU, BIOS issues, 3.5mm plugs for my 5.1ch surround speakers) have been put to rest with this motherboard. Even though BIOS was old, it did install fine, all the options were there and all worked perfectly for past 2 weeks. I would recommend this board.

Pros: It's a good bored I got a bad unit.

Cons: (for me) the rear audio io didn't work. I updated everything from windows to drivers. I even reinstalled windows just to be sure (and yes I set it up to play through my headphones and I even tried a second pair). All I hear is static no actual audio. It's a good board I'm giving it 3 eggs because of my experience.

Overall Review: Overall it's not a bad board. Some things seem cheap but it's not a high end Mobo so I wouldn't expect too much. Im on the fence if I should recommend this mobo because I don't know how common this issue is. I put in for a replacement and will update this when I get a new one. But it only gets one more chance.

7 out of 7 people found this review helpful. Did you?
Manufacturer Response:
Dear Alex S., I'm sorry to hear that your board was having audio issues. All ASUS products undergo intensive quality control, testing and inspections. What you've experienced was not intentional or representative of our brand. I will forward this case to the Product team for review. I understand that you are waiting for a replacement, but if you have any general or technical questions when you receive the next board, please email me at cl-lane@asus.com and include case #N200483694 for reference. Thank you for choosing ASUS! Best regards, Lane ASUS Customer Loyalty – US Support
Anonymous
Ownership: 1 week to 1 month
Verified Owner
Excellent motherboard, worked with 3200MHz G.Skills Ripjaws8/15/2020 7:44:00 AM

Pros: So far so good! Very easy setup, everything was laid out logically and worked great. I don't build often, so I do actually use the owner's manual, which was also fairly good for a welcome change: easy to read and decipher. Configuring my RAM took a tiny bit of work in the BIOS, but even that was simple, just enable DOCP in the AI Tweaks section, and it adjusts everything else for you. You can override settings if you want, but the settings it picked looked right on to me. I really appreciate how much thought and effort went into the design of this board.

Cons: Nothing, really. It's been solid so far. Ah, one thing that isn't a con so much as a "learned a thing," if you have issues with Windows (I blue screened Win 10 by kicking a loose power strip, duh) make sure to turn OFF DOCP before trying to reinstall, or it will give you constant errors and issues.

Overall Review: I would definitely recommend this motherboard to others. It's the center of my mid-range build (Ryzen 5 3600, 16GB DDR4 3200 G.Skills Ripjaws, 1TB NVMe M.2) So far it's a freaking beast. One

Cons: The only thing I dislike : not enough fan headers, had to buy a splitter, otherwise its perfect!

Overall Review: Board is really good, looks good, runs very at a low temp, easy to setup in bios.

Pros: Great motherboard for the money. Lots of good features. Would buy again.

Cons: This was the first Asus board I every gotten that didn't have the front panel header. The writing on the motherboard is really small, I had to use a magnifying glass to read it. Having the header I could have made all my connections and just plugged it in. Took me 15 minutes of looking at the motherboard and the manual. With a header would have taken less than a minute. Only reason I didn't give it 5 stars.

Overall Review: Would purchase again or go for the pro model

Cons: Multiple BSOD errors when attempting just to install OS, swapped with a B450 board I had laying around using all same parts and fired right up and installed OS no issues Like others have said, placement of on-board fan is a covered directly by any larger GPU

Overall Review: Ive been building PCs for friends, family, and to sell locally for many years and this is one of the few defective boards I have received fortunately. I was bummed because this client was on a budget but wanted X570, this was only available board within his price range. Reading other reviews I see that quality control seems to be an issue with this unit, hopefully that changes as I have always had good luck with Asus in the past. Giving it 3/5 eggs for now because the board, if it worked, would have been 5/5 based on value, 1/5 if the replacement board is also defective.

1 out of 1 people found this review helpful. Did you?
Manufacturer Response:
Dear Mackey V, We certainly understand your disappointment with the quality of the product that was received and the inconvenience this may have caused you. What were the error codes given to you when the crash occurred? For improved stability please make sure you’ve updated your drivers to their latest version, If possible, please give me a detailed description of any specifics in regards to your current situation. You can reach me at cl-adrian@asus.com. Your case for reference is N200735259. Thank you for choosing ASUS! Best Regards, Adrian ASUS Customer Loyalty – US Support
Kyle S.
Ownership: 1 week to 1 month
Verified Owner
Has everything you need, but there's a loud fan that you can't adjust4/30/2020 4:49:58 PM

Pros: Solid Nvme capabilities, board is well spaced out for what it has, giving you the room to fit what you need to fit

Cons: THe PCH fan is loud, and you can't adjust it in BIOS (It's the only fan that Asus decides to lock you out of - they must have known something was wrong with it) There is no USB 3.1 plug on the board for USB C, so don't get this if your case has those...

Overall Review: Probably wouldn't buy again. The fan resonates with my case... but that's a personal issue, plus I need the 3.1 and I missed that issue. However, this is a good board otherwise, it's solid, doesn't have any issues, the BIOS is legible and the Armory software is very good.

1 out of 1 people found this review helpful. Did you?
Manufacturer Response:
Dear Kyle S., I'm sorry to hear that you are unsatisfied with the chipset fan design. That is certainly not the type of experience we want any of our customers to have. If you haven't already, I recommend updating both your BIOS and chipset driver from the link below. That may alleviate some of the fan noise. As you noted, that fan is not adjustable. I will forward your feedback to the Product team for review. If you have any general or technical questions, please email me at cl-lane@asus.com and include case #N200489888 for reference. Thank you for choosing ASUS! Best regards, Lane ASUS Customer Loyalty – US Support

Overall Review: will purchase this again