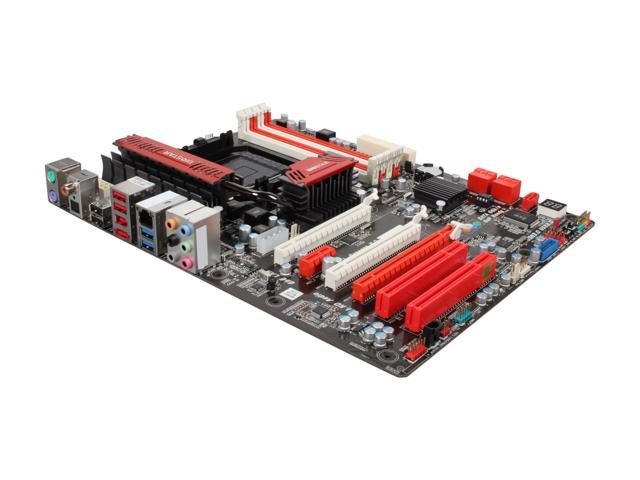 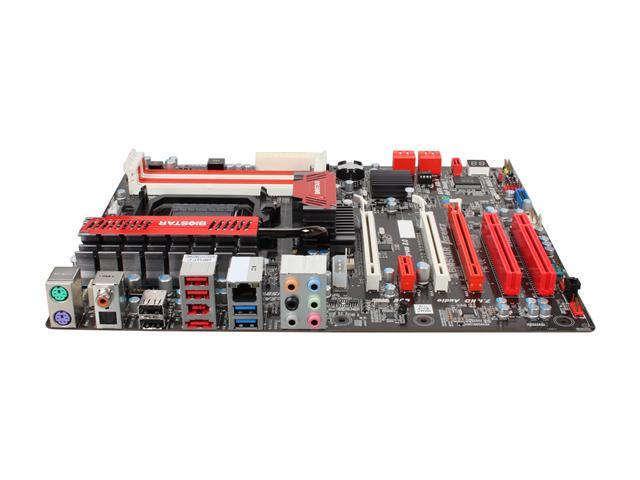 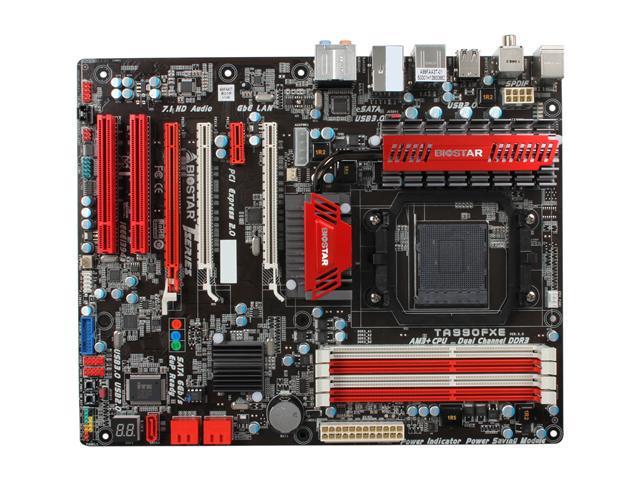 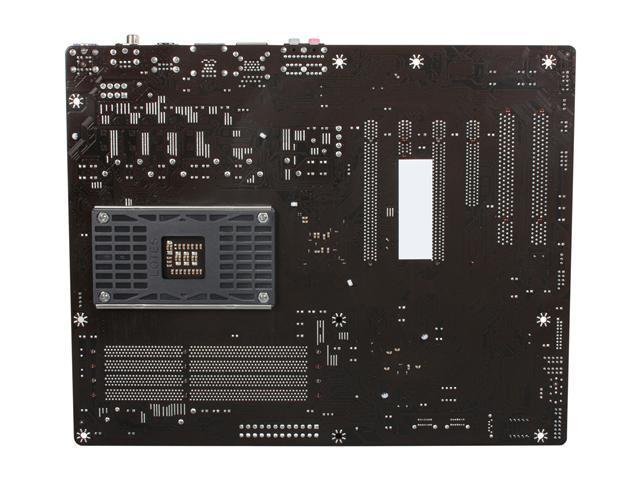 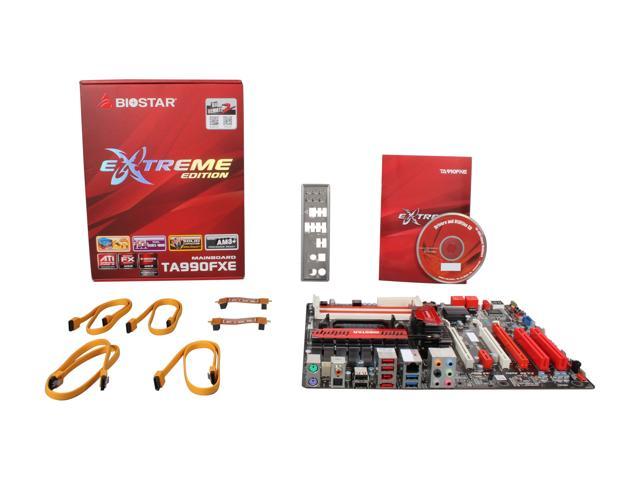 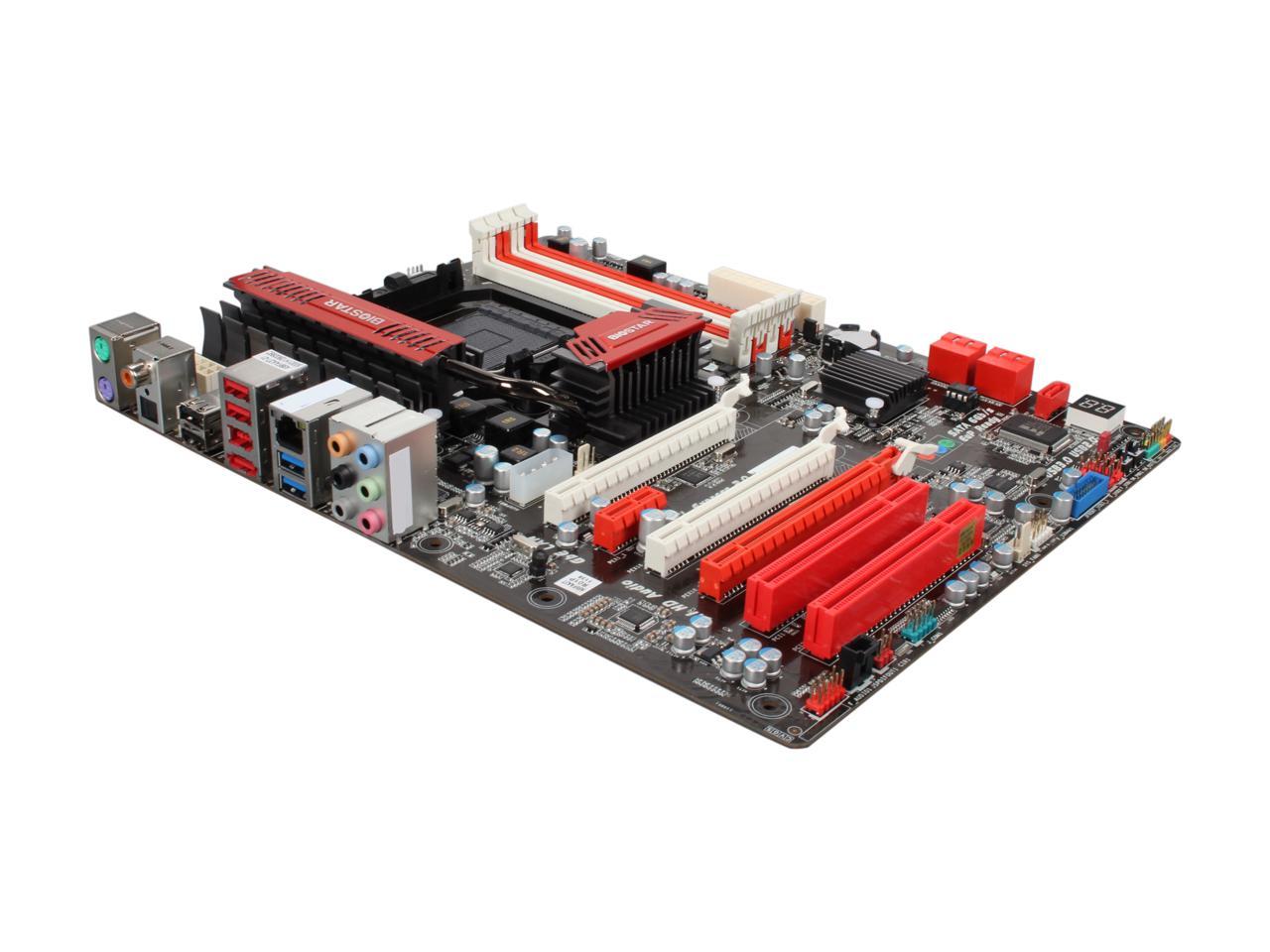 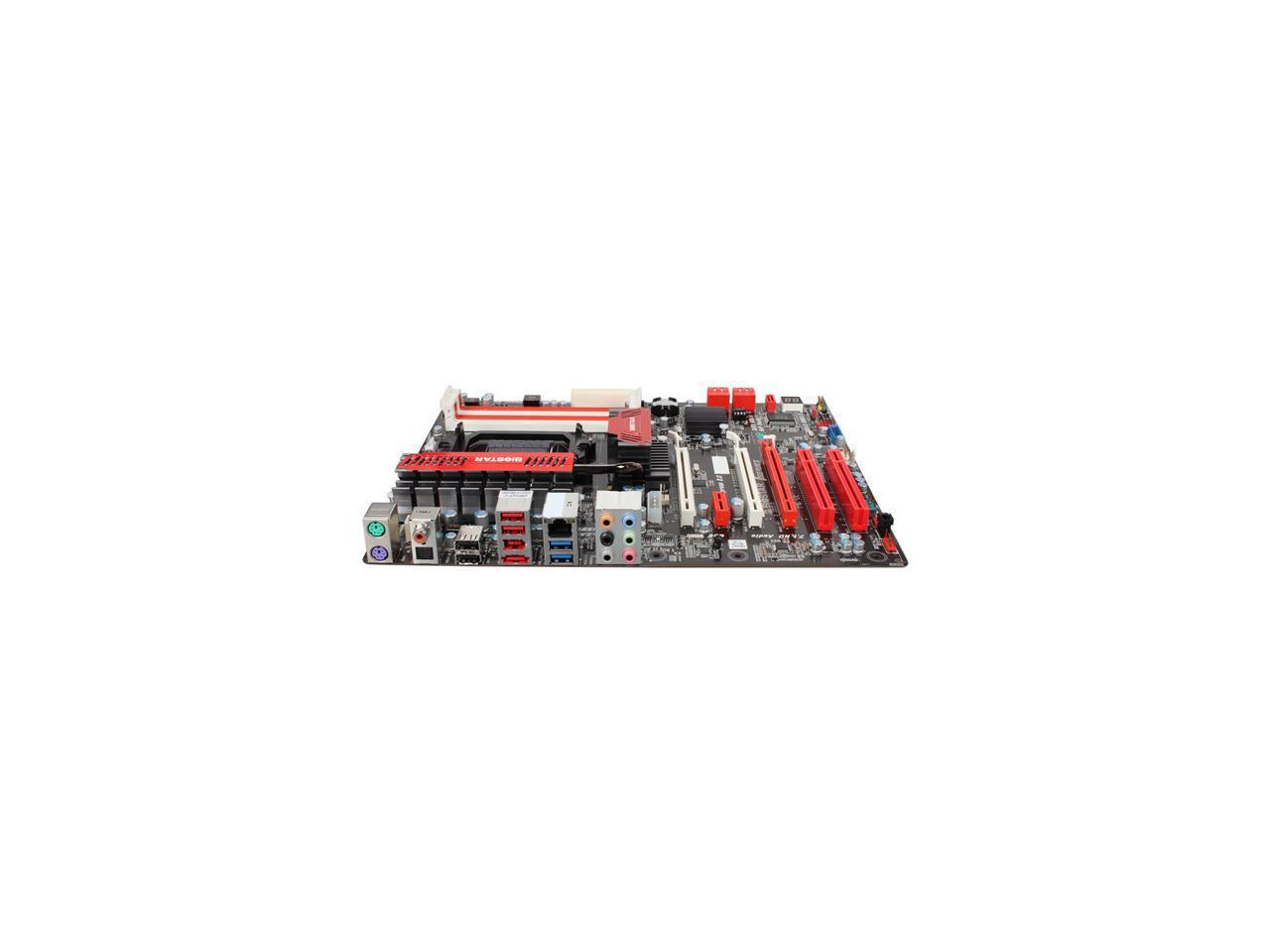 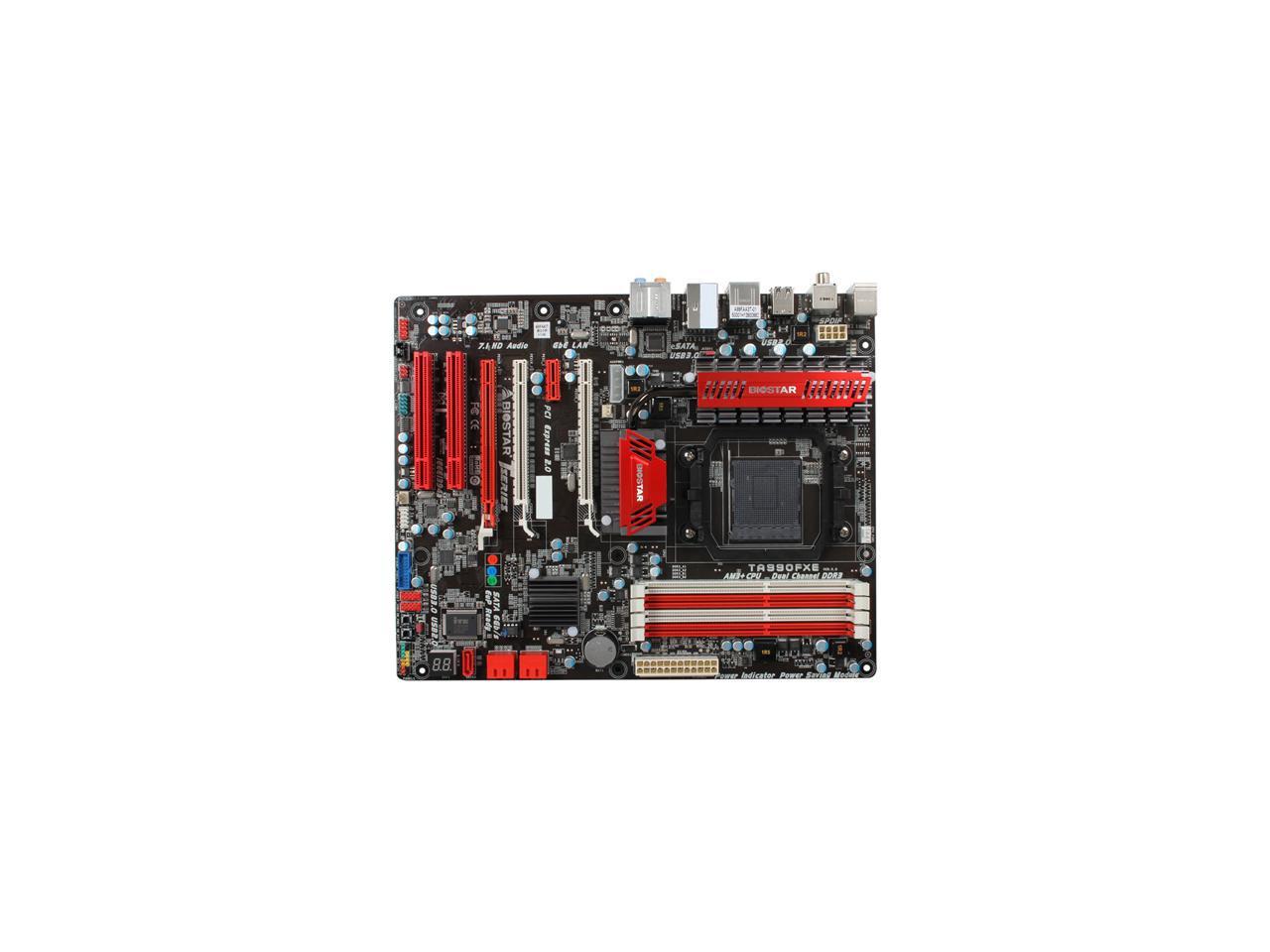 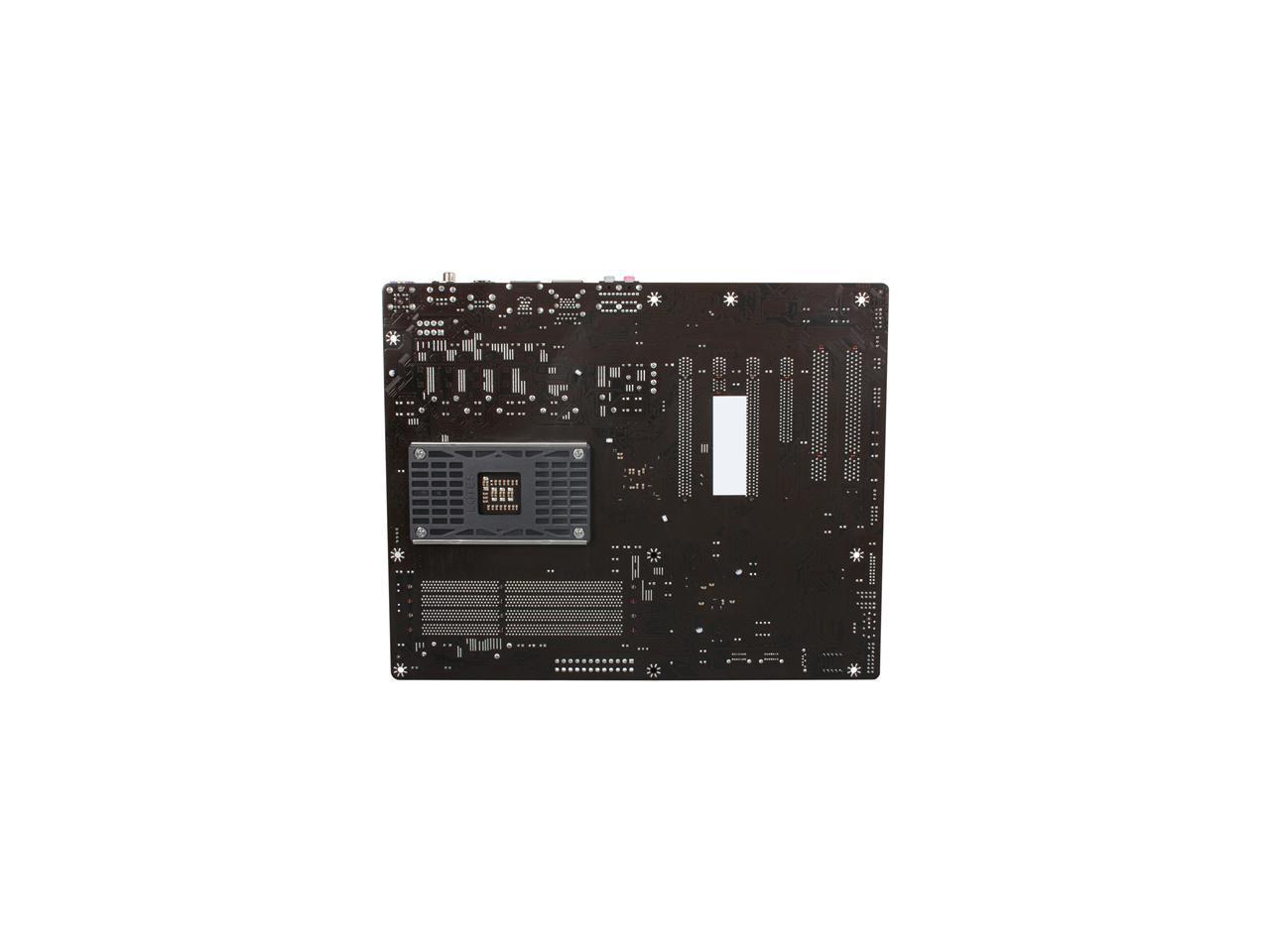 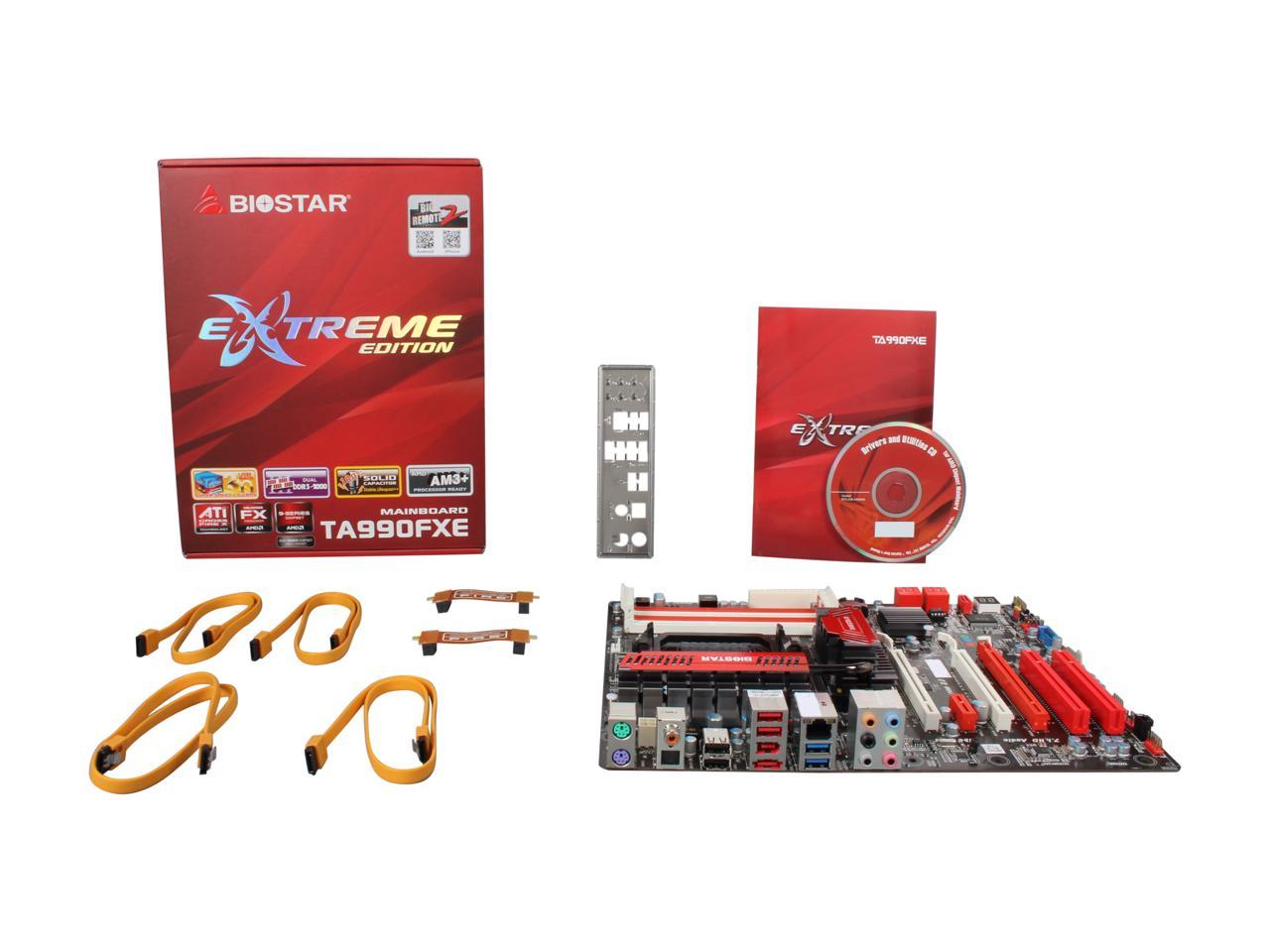 (210) Write a Review
OUT OF STOCK.
Overview
Specs
Reviews

Powered by the AMD 990FX chipset, the BIOSTAR TA990FXE motherboard is a great foundation for your next PC build supporting the state-of-the-art Socket AM3+ processor AMD FX (Bulldozer). All solid capacitors ensures excellent durability and reliability in tough environments while the G.P.U (Green Power Utility) dynamically disable/enable power phase based on actual CPU load to optimize power delivery and power savings. BIO-Remote 2 technology turns your Android or Apple products into a remote control, making your smartphone even smarter. The latest connectivity, including USB 3.0, SATA III, eSATA, IEEE 1394, greatly improve the data transfer speed thus getting libraries of photo, music and HD movie transferred in less time. The NVIDIA SLI and ATI CrossFireX technology boost your graphics performance to a new level by enabling multiple graphics card to co-work in a single system.

Learn more about the Biostar TA990FXE

Pros: I bought this for a friend and he is very happy with it he does mostly gaming WOW and other games on it and a little bit of webbing he has no problems to report to me at all, I am resposible for about 7 computers and they try to keep me busy and will be buildoing more and with budget allowed this is the mobo that will be used again

Cons: it is not an ASUS but then it also not $185 I would have prefered a few more USB ports on the back than supplied using the 2 headers on it for case ports and card readerthat ledaves keyboard mouse printer camera and out of USB2 ports all left is USB 3 but not worth taking away an egg for it since knew this before ordering

Overall Review: The cons are not cons, really. I prefer my SATA to face up, and the 16GB limit is only listed because other similar boards support up to 32GB. But really, who needs 32GB for a home based machine. The new EFI is easy to use, even if some of the setting are a little obtuse. This is a good, solid board and look forward to years of service from it.

Manufacturer Response:
Actually the motherboard can support 32GB, since majority of the memory controlling is by processor. Since market does not have many 4x8GB or 2x16GB available. To be safe we put 16GB support. When we feel the market has more of these kinds of memory and also more variety we can verify without issues, we will change to 32GB official spec. At this moment we are almost complete testing and will change memory support to 32GB.
Susana L.
Ownership: 1 day to 1 week
Verified Owner
flag ship board board that wont explode10/28/2011 2:42:07 PM

Cons: Bios doesn't give you the option to lock cores You cannot adjust turbo boost but luckily it turns it off when you overclock Cannot undervolt components in bios but the cpu Frequencies are not displayed in properly in bios is base clock is adjusted Using up the two 16 x pciexpress slots with dual slot cards will block all other pciexpress slots

Pros: Its Biostar! I've bought over 50 of these boards for client builds, all have worked flawlessly other than some minor annoyances with the new UEFI BIOS.

Cons: Locked BIOS. This BIOS does indeed have, yet is missing most configuration options that the TA890FXE had. It only has about 1/3rd of its actual options available to configure, and while the missing options actually do exist in the BIOS file itself (feel free to check if you know how), they are locked out/missing. Common timing elements, power configuration elements, PCI-E control elements, RAM configuration elements, etc - all are hidden, with defaults being the most restrictive for performance. You can't even set the RAM to ganged, as the option is missing. The manual says its there, including other settings, but they do not exist for the user. If you loved the configuration options of the TA890FXE, you will undeniably be disappointed with this BIOS.

Overall Review: This proprietary APTIO UEFI BIOS is an effin joke. Biostar is really limiting the potential of this board by having over half of the settings unavailable to the user. Basically all advanced settings and even some very common basic settings - all locked out. 5 sata ports are disappointing, including the lack of IDE port. Considering DVD drives dont even remotely use the bandwidth of IDE, having to waste one on a SATA port is even more sad. Otherwise, solid board from a company that still cares about quality. Bad reviews below are clearly by people who do not know how to build, much less should even be allowed to touch a computer. The overclockers are just as bad with their complaints... seriously, what do you expect when you are trying to fry a board or other components?

Pros: The board is well constructed, easy to install, well laid-out and booted up immediately. It has the higher-end 990FX chip for a bit less than the competition. (I used the FX-8150). It is highly customizable. It has many options in BIOS settings and the drivers provided on the DVD-rom worked immediately. All drives were recognized and memory set to the correct speed. It has been speedy and stable so far (after close to a month of heavy use). Support was fast (I called, and had a person to talk to within a minute) and was friendly enough, although it could be improved upon a bit in terms of helpfulness and service attitude.

Cons: As an electrical engineering professor, I find the documentation to be lacking. Compared to my other builds based on ASUS and MSI motherboards, the manual that came with this Biostar board does not include the level of detail and specific information that many would need, especially for beginner builders. A good example would be the harddrive controller settings. The description for AHCI/RAID/Legacy IDE does not exist, and with people using SSDs and HDs in mixed builds, the difference would be good to discuss. In my case, I was unaware that TRIM would not be enabled in RAID mode (I use an SSD for system/software, and a set of RAID-0 stripped harddrives as the "work" drive), since the AHCI instruction (by strict specifications) should be passed in RAID mode. It's a small detail, but a necessary detail on a system limitation. Many other BIOS settings are also not mentioned at all in the manual. I would suggest that BIOSTAR improves on the documentation.

Overall Review: I called Support twice to inquire about the TRIM issue. After I described the specific issue, the support person told me that RAID did not support TRIM, which is fine (since the Kingston HyperX has good garbage collection built-in). However, he did not suggest any workaround, which exists, until I suggested it (to set the motherboard in AHCI mode instead of RAID, then use Windows 7 to do software RAID, not optimal, but it would work just fine).

Pros: easy to set up, had really no issues. seems solidly built and the red accents are a nice touch. Support is very responsive and quick.

Cons: the SATA ports are positioned in a weird way, you have to twist the SATA cables at a 90 degree angle to get the HDDs plugged in or use cables with the 90degree angle builtin. out of the box, the latest BIOS on the US website is out of date but there's no way to know since they haven't made the new version available. i found out because i had a recurring issue with audio, if i woke my PC from sleep, audio was disabled and i had to re-start to get it to work. support immediately sent a link (from their Taiwan website) so I could download the latest BIOS. everything fine now.

Pros: Cheap board. Onboard power/reset buttons. Has been stable for me. VRM/NB heatsinks seem adequate

Cons: Not very fun to overclock on this. Worst UEFI layout I have ever seen. Extremely inefficient placement of locations. Not the best overclock options. The voltage offset + setting voltages is probably the biggest complaint I have against this. (Biostar, please just make voltages absolute instead of relative to an offset)

Overall Review: I have an FX-6100. 1.4 VDD set, after vDroop, it is 1.3V. No LLC equivalent option that I have found in UEFI. If overclocking is a hobby for you, I would not recommend this board. However it is cheap and decent for stock and light overclocks I cannot comment on the auto overclock options in the UEFI, I only used manual. Please be careful with vCore. If you offset vCore and then raise vCore it will be what you set at it + offset. For example, offset for vCore set at +0.1V, with vCore set to 1.4V will yield 1.5V vCore

Cons: Poorly laid out. It drives me bonkers when they pack two PCI-e slots so close together that your top video card overheats since its fan cannot breathe. If you run your dual GPUs in 16x slots, then you cannot use either of the other two PCI-E slots (1x or 4x) since they will be blocked. This forces you to run 16x/4x which is fine for me since im only running 5830s. Overclocking in the bios, could be worded or documented better, i still have not been able to find the CPU multiplier.

Overall Review: Part of me wants to give this board 3 stars and the other part 5. 3 because i hate the layout of the PCI-E slots, 5 because it does everything i need very well for the lowest price 990 chipset i can find. After having a failure with MSI 970 and power issues with an asrock 970 -- im just glad the biostar works without flaw.