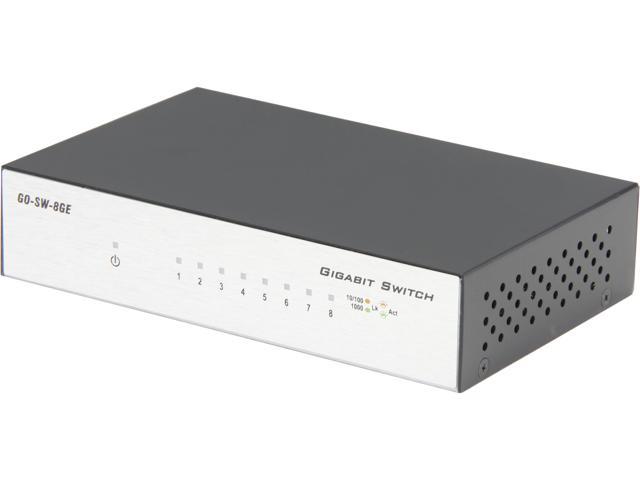 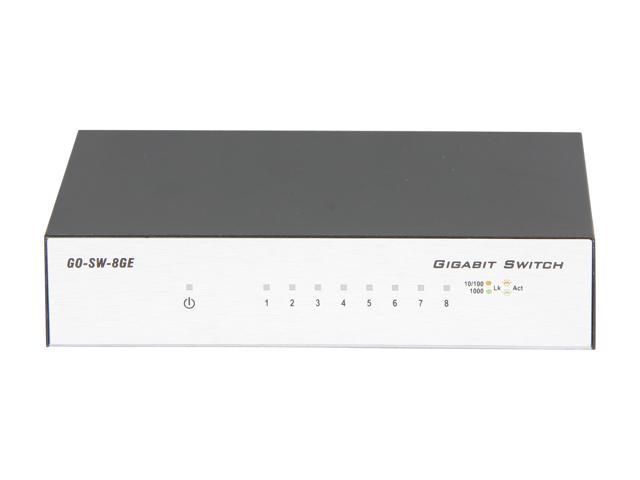 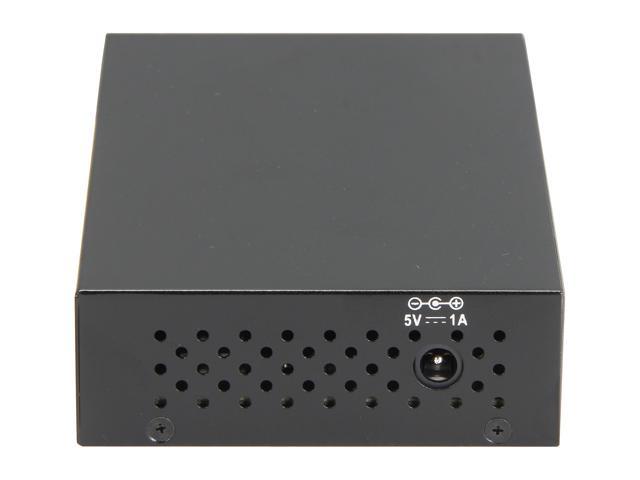 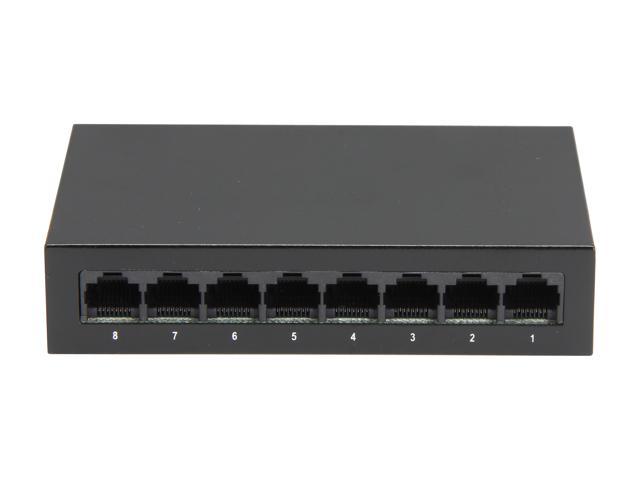 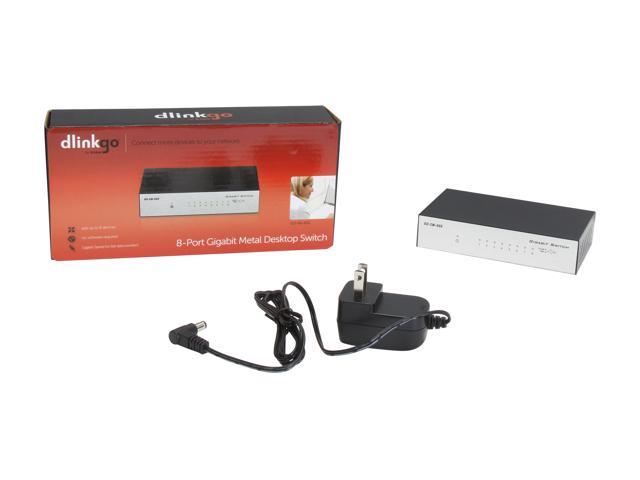 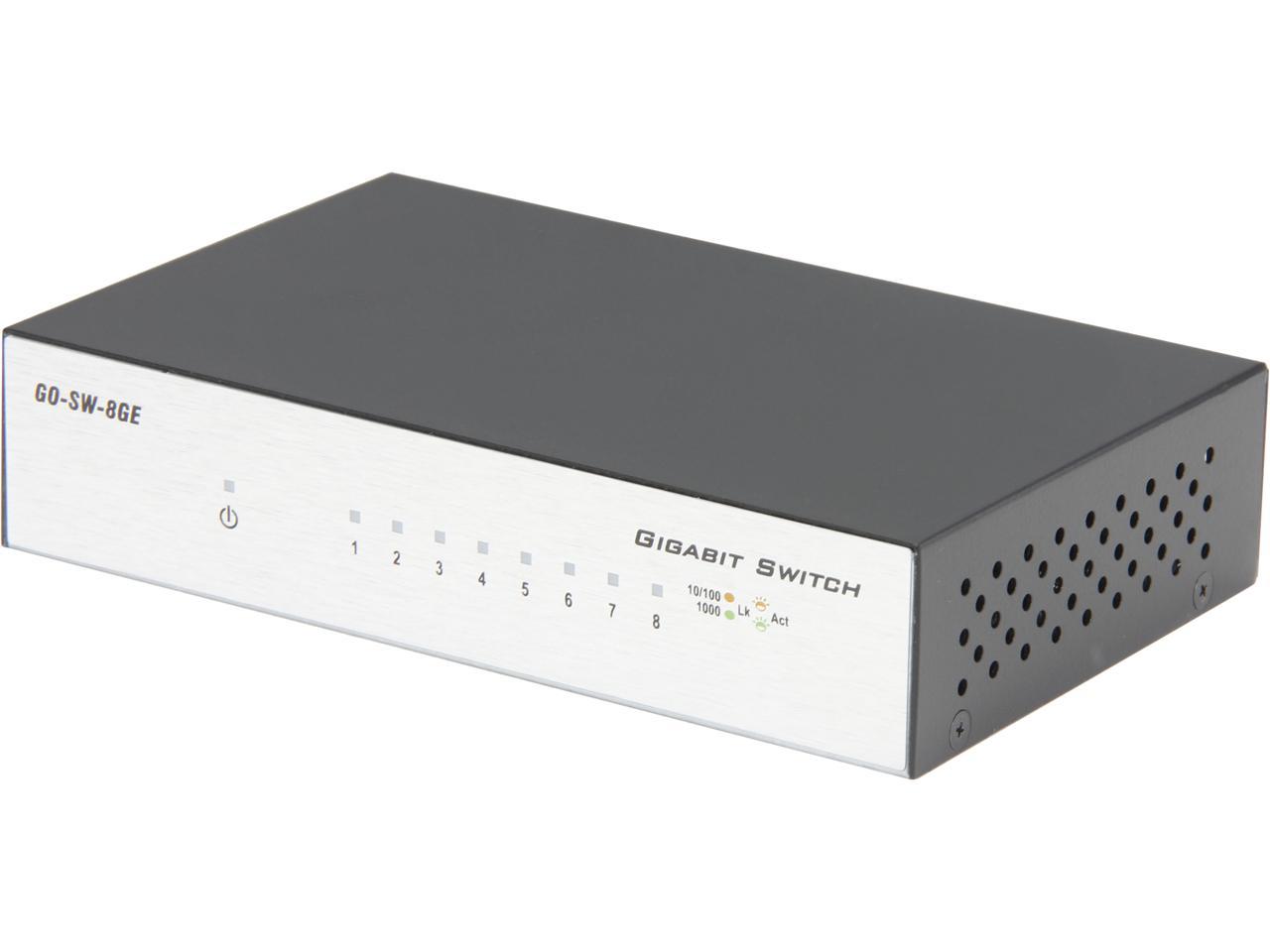 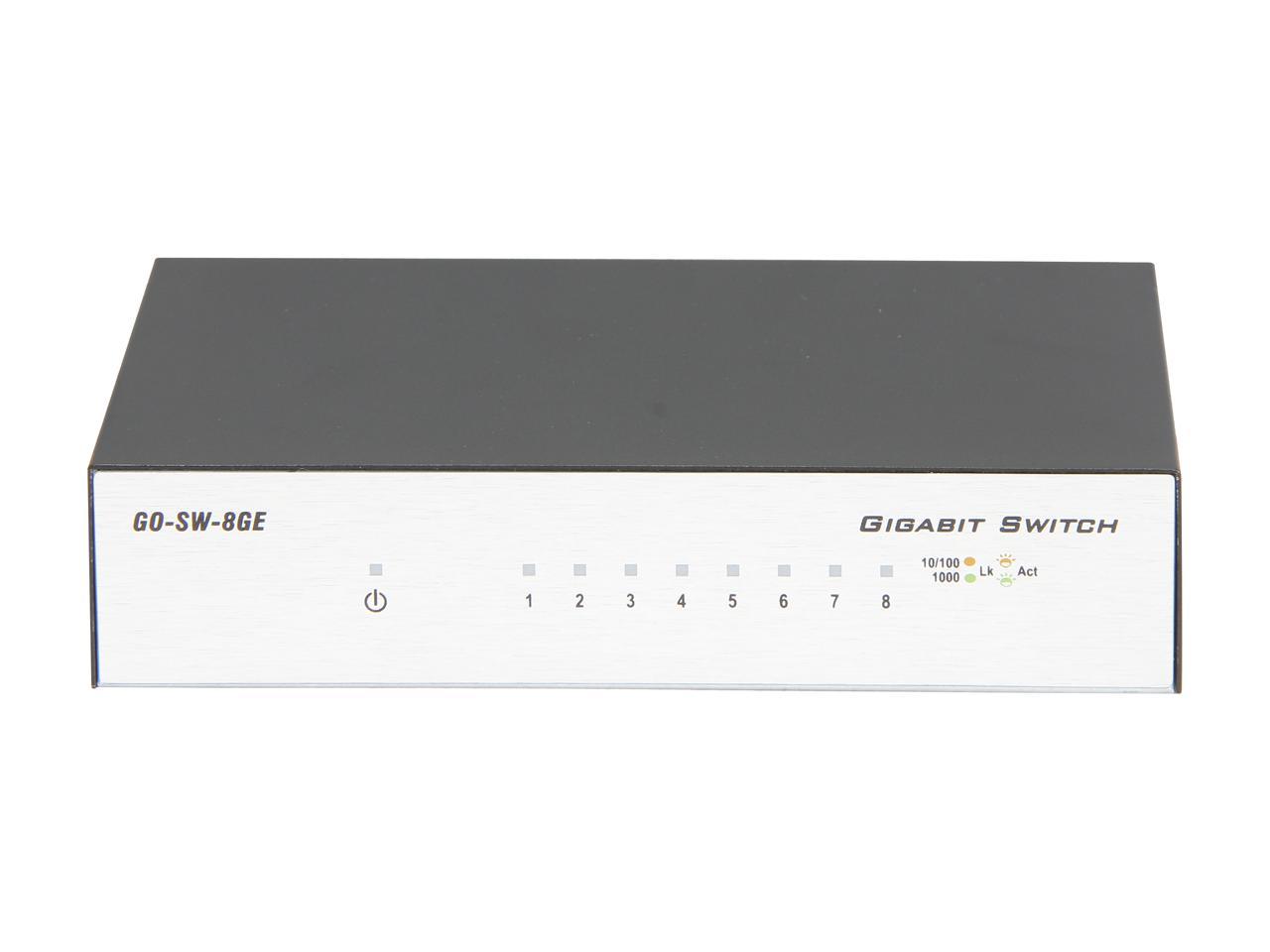 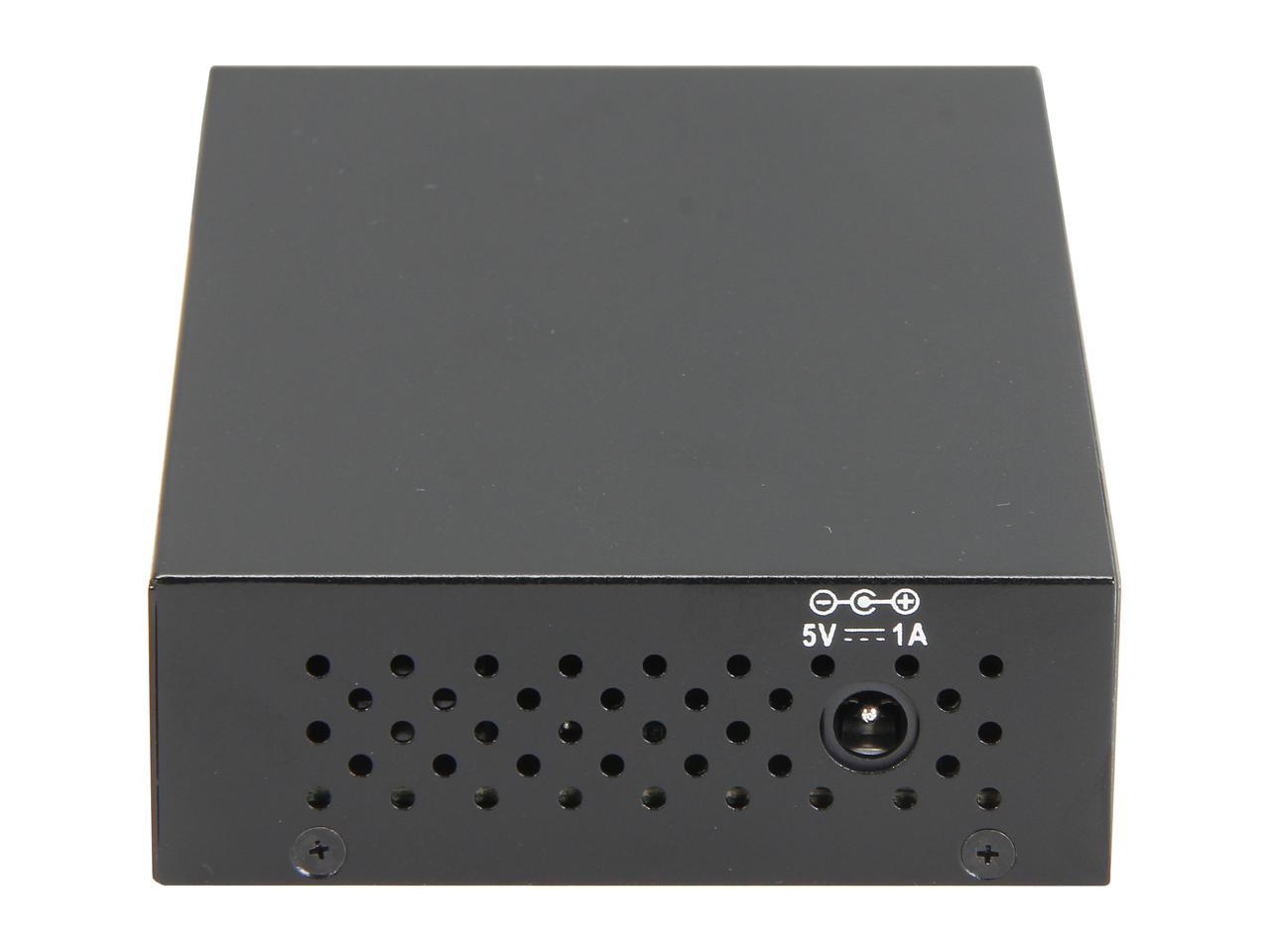 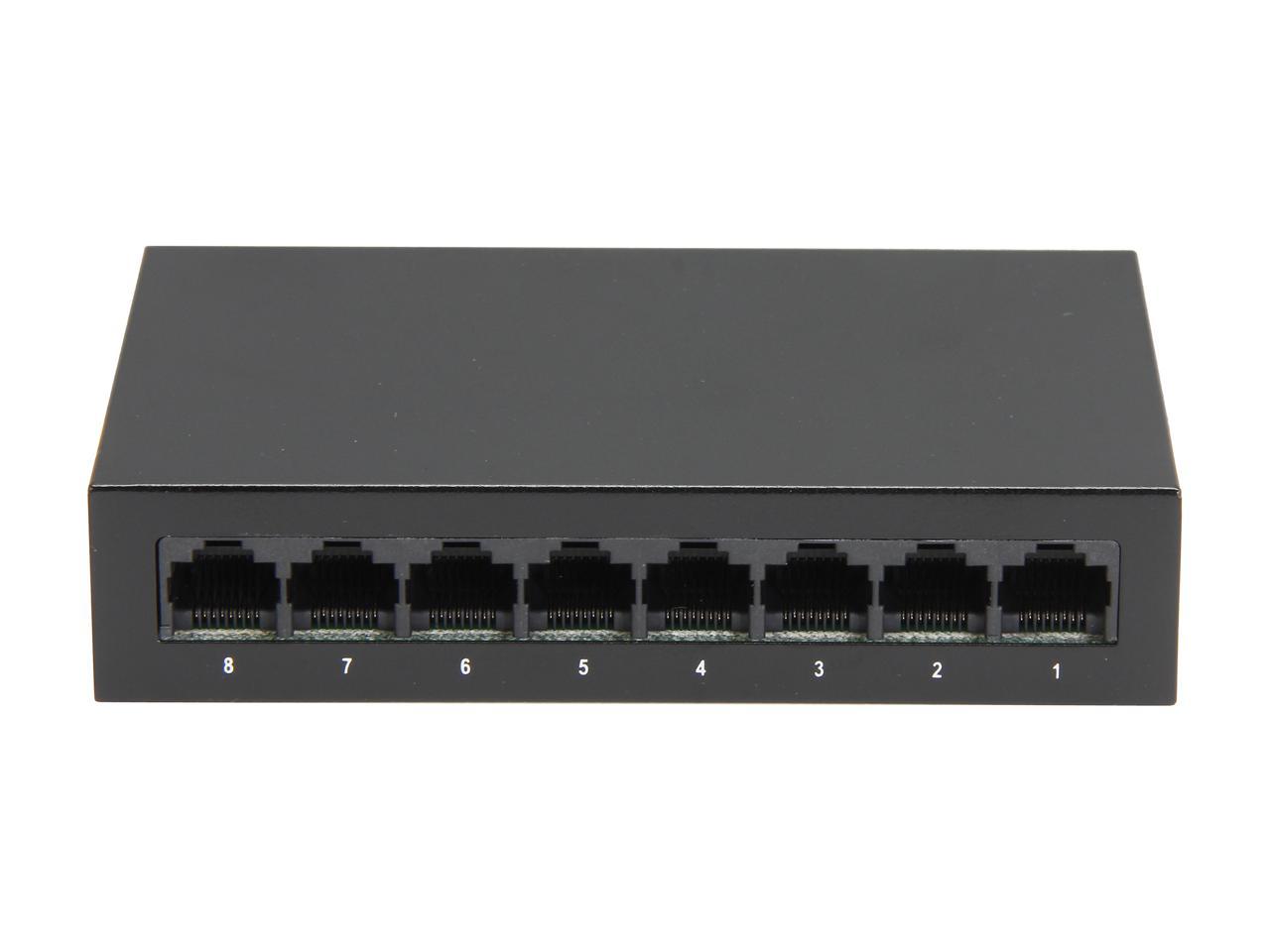 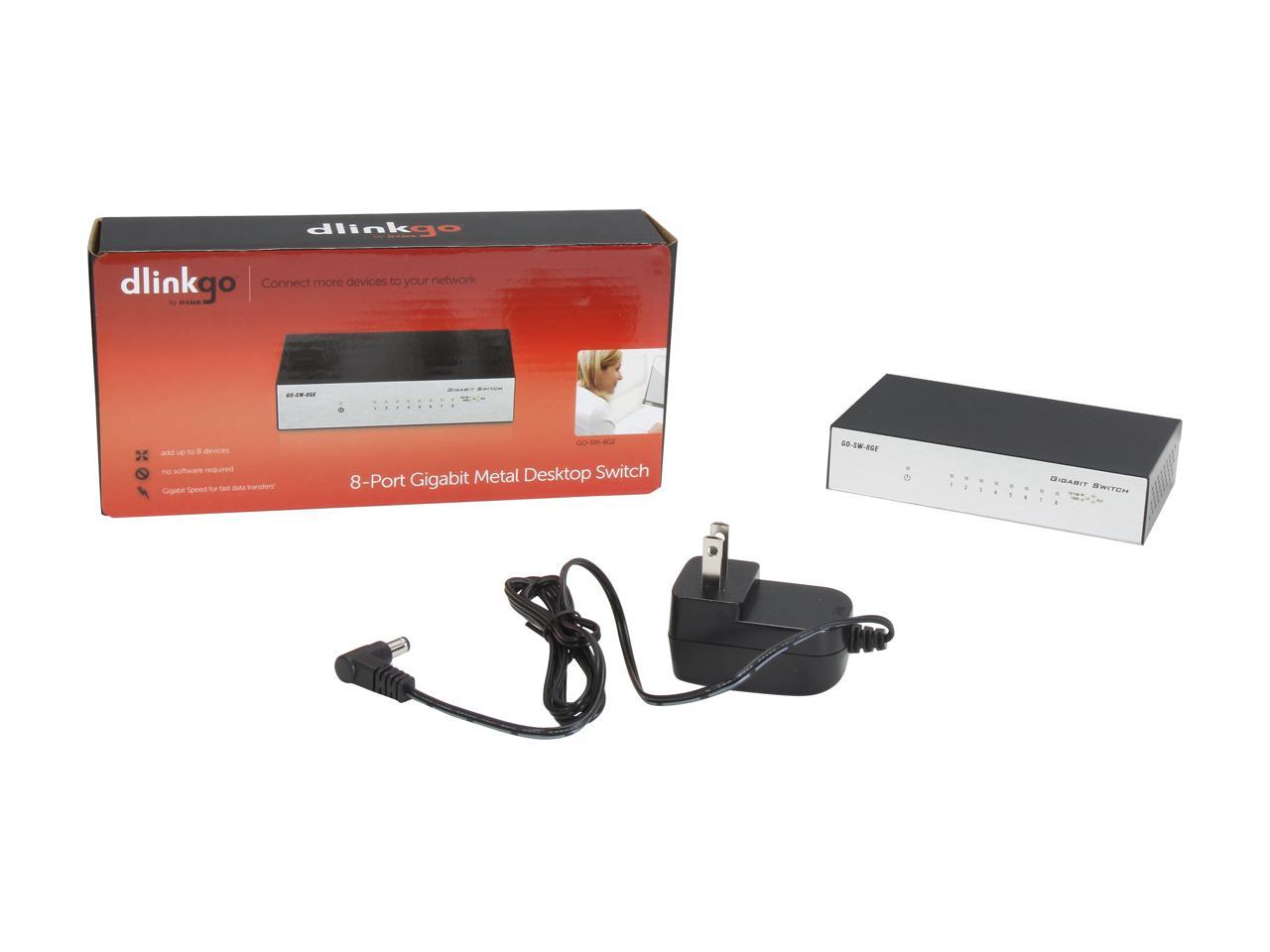 Learn more about the D-Link GO-SW-8GE

Pros: Easy to set up Fast transfer speeds (if your set up for it everywhere else) Lights are not too bright (and different colors for different speed connections, yellow for 10/100, green for gigabit, they flash when activity on them) Seems very sturdy Plug and play, very simple to add 7 more wired connections to a network

Cons: Side power plug, thats about it. Seems many switches have the power on the side or even front (opposite the ports). Just make the box 1/2 inch wider to put it in with the ports

Overall Review: I used this to replace a 5 port netgear gigabit switch. Works just as well as a switch that costs $15 more (with 3 fewer ports) This thing reminds me of stuff you would buy at Radio Shack back in the 80's (not a bad thing, just a real metal box with some heft to it). Also, remember, this is an 8 port switch, but you need a router hooked up to one of those ports to assign IP addresses and such, so you will have 7 ports to use for other systems.

3 out of 3 people found this review helpful. Did you?
GREGORY E.
Ownership: 1 week to 1 month

Pros: + Compact Metal Case: Measures a mere 5" x 3 1/8" x 1 1/8" + Connections on the Back: IMHO for home/personal use this is the way a small form factor switch should be designed. (personal preference) + LED's on the Front: With the wiring on the back the LED's are easily seen on the front and not overpowering or annoying in their intensity. + Auto Sensing: No need to supply a crossover cable + Green Smart Design: Senses if the connection is made and the length and adjusts power to that port accordingly. + 3 year warranty - 1 year on the power supply

Cons: I really have none. Oh I could mention the power jack plugged into the side, but I understand the engineering aspect and why it was done this way. It is not a problem where I have the switch located.

Overall Review: The last two switches I have used in my home network made me wonder why they were not constructed along this design. With the metal case supplying enough weight, the rubber feet, the rear connections, the simple LED's on the front, and the smart green technology I really have no complaints about this switch. If you are a small business and want a rack mounted switch, then it makes sense to have the connections on the front. For the home user, I think this design is superior. As one reviewer said, this switch is much like plugging in an extension cord on your network. It gives you extra outlets for additional devices with very easy setup. I have not had any problems with file transfers/speeds using it, but confess that I have not worried about benchmarking the speeds. With three people gaming and another watching Netflix, we have not encountered any stutter whatsoever. That is good enough for me. I recommend giving this switch ample consideration if you are shopping for a switch.

3 out of 3 people found this review helpful. Did you?
christopher c.
Ownership: 1 week to 1 month

Pros: Sturdy metal construction 8 ports all with auto sensing No software fuss Easy to see port lights (not annoyingly bright) Mounts on wall or comes with optional rubber feet. -I like to mount all of my electronics so they are hidden and out of the way but easily accessible. This device is no exception. I've replace a router that I was bridging with absolutely no issues and no setup fuss. I now have TV, BluRay (netflix, and youtube), Wii U, and Dish Network hooked up with no problems. Many open ports for what comes next (new receiver).

Overall Review: Other have mentioned having the power plug on the side to be a con but I like it on the side because of the way I mounted the device, I don't have to worry about it getting pulled out accidentally.

1 out of 1 people found this review helpful. Did you?
Alex C.
Ownership: 1 week to 1 month

Cons: Power on the side of unit

Overall Review: Dlink Go-SW-8GE Power connection is on the side of the unit, though it saves space I would have preferred to see power out of the rear of the unit like the LAN cables. The power cord looks alright being a typical power brick, best plugged in at the bottom of the surge protector. The plug for the router is a 90* and again plugs in on the side of the unit. The switch its self is all metal and has a nice front, resembling brushed metal. On the front you have indicator lights for power and ports 1-8. Ports 1-8 being duel color orange 10/100 and green 1000. The ports in the back are color matched, black, to the housing and solidly lock all LAN cables in place. The ports also turn off when not in use saving power.

Pros: This product has been sliced and diced over thirty ways witnessed by over thirty accompanying reviews ranging from esthetics, specification to warranty. It’s unnecessary to rehash what has been previously said; other than, it does what it’s designed to do. For those who don’t have a so-called smart who is thinking about getting one, to cut through all the mumbo jumbo; this is the business end of an Ethernet connection. Think of as the plug end of an extension cord – and – it’s about that easy to use. For smart switch terminology, for all intents and purposes its plug & play, you don’t need the expertise of an IT professional to expand your network. For the average Joe, installing this isn’t much more difficult than using an extension cord. Don’t anticipate adding eight Gigabit Ethernet expansion ports; one of them is lost connecting the switch to its source (host) – and – parallel, the same on the host end. A router with four Gigabit Ethernet connections – and – a switch with eight, yields a total of 8 + 4 - 2 = ten useful connections. I wouldn’t hesitate to recommend this; the impression I’ve gotten is; it’s trustworthy and suitable for home/small business- applications, which fall within the perimeters of its limitations. For most folks needing to expand their network, this should work fine; when in doubt (be attentive to details), call D-Link customer support: 1-800-326-1688. Judging from experience with D-Link products; I’d classify their customer support as respectable. As far as dependability, I haven’t had any problems with D-Link products; obsolescence preceded any internal issues, which may have arisen.

Cons: Cable not included. The LED indicators bleed into the adjacent display windows.

Overall Review: This is falls within better than acceptable limits, although it doesn’t fully meet my esthetic expectations. I wouldn’t dissuade you from buying this product based upon core quality or its capabilities. The thing which turned me off was the meager front panel display and consumer grade case. My perception was; it looked and felt cheap, although it serves its purpose. On-line or in a catalogue, it looks fine. Hands/eyes on, it appears more toy like than a piece of high-tech equipment. It’s referred to as a desktop switch; frankly, I’d hide it rather than display it on my desk; the LED indicators are pathetic. As far as switches go, I’d say (similar specifications) they’re more or less generic. I’d imagine the primary decision factor between buying this over its competition would be s brand loyalty - or - perhaps desiring to keep some semblance of continuity, i.e., coupling a D-Link router with a D-Link switch; unifying customer support if needed... Testing profile: The switch was evaluated as an intermediary between devices - and - TP-LINK Archer C7 AC1750 Wireless Dual Band Gigabit Router IEEE 802.11ac broadband download speed through the switch: 65.29 Mbps (not suggestive of switch capabilities), mentioned for reference purposes only. The version assessed was 3.00(NA) May 15, 2013.

1 out of 1 people found this review helpful. Did you?
Jeremy S.
Ownership: 1 week to 1 month

Pros: - Small - This 8 port switch is only slightly bigger than the 4 port switch it replaced. And by slightly I mean about half an inch in one dimension. Thickness and width are the same. - Speed indicative lights - Green for 1GB and amber for 10/100 - All metal construction - looks and feels solid. - Plenty of room for expansion. I just added a PS4 to my living room, which is where this switch goes. I was not happy with it running on wireless, so now I have the extra ports to run it wired.

Cons: Nothing. I mean, it's a switch. I could make things up, but that's all I'd be doing. Gee, I really wish this came in metallic flake orange.

Overall Review: -Tested with [Giant online retailer which cannot be named here] Video and online games on a PS4 and You Tube/STEAM/pretty much everything on a PC. - No speed loss going to this switch from my previous switch. Much more stable than using the wireless on a console.

Did you find this review helpful?
Rob H.
Ownership: 1 week to 1 month

Overall Review: I have been using D-Link switches & routers for the better part of 10 years and this one has exceeded my expectations! Being about 1/3 the size of my first 5-Port gigabit switch and only slightly bigger than the smallest 5-Port switch I currently own, I am surprised that they could pack so much capability into such a small unit. I have 2 fully functional D-Link switches and an 8-year-old DGL-4300 acting as a switch, so I have little doubt this one will go the distance also. To test it, I redirected 7 of my busiest devices through it (including my web server) and could not be more pleased, several weeks later, without any issue. I ran Speed Test (My favorite speed utility) from most of the PCs that are directed through this switch and there seemed to be no diminished speeds. As mentioned in the pros, the build quality is there with a metal housing, mounting holes and optional rubber feet. The LEDs are subdued, which is big for me, mainly because I get really annoyed with overly-bright LEDs. 5 eggs for an all-around quality device that my history with D-Link indicates it will last for years to come.

Did you find this review helpful?
Anonymous
Ownership: 1 day to 1 week

Pros: - Very Compact in size, not much larger than the 8 ports it holds. - Metal housing. Nice touch - Plug and play. It just works - No reliability issues - Wall mountable

Cons: - Wish it had come with a pair of screws and a patch cord

Overall Review: Used it to extend the stock 4 ports from a Ubee wireless router/cable modem providing an additional 7 open ports. plugged in an ATM machine into 1 port and a MP3 Jukebox in another without issues. Link light color is different for 100 and 1000mbit connections. Nice. Used the rubber feet and mounted it lights pointed up on a wall board. The feet help keep it firm in place so it does not slide when inserting cables from the bottom.