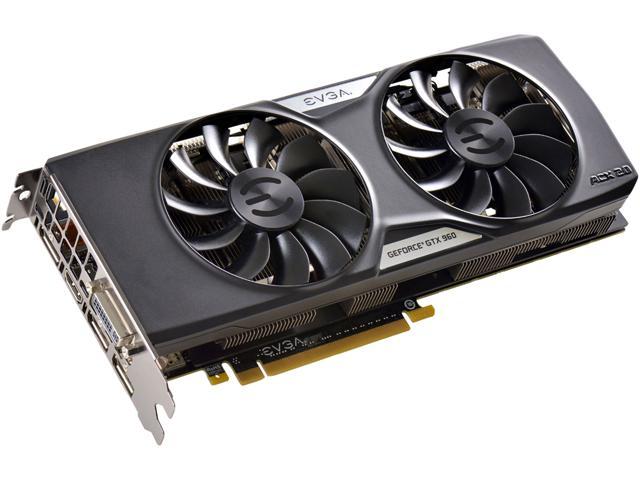 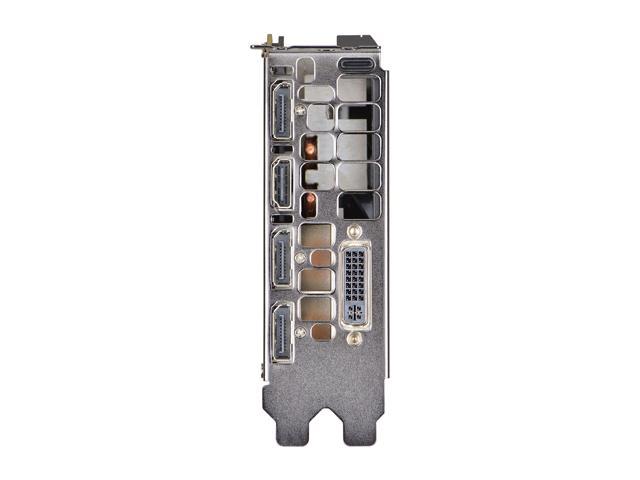 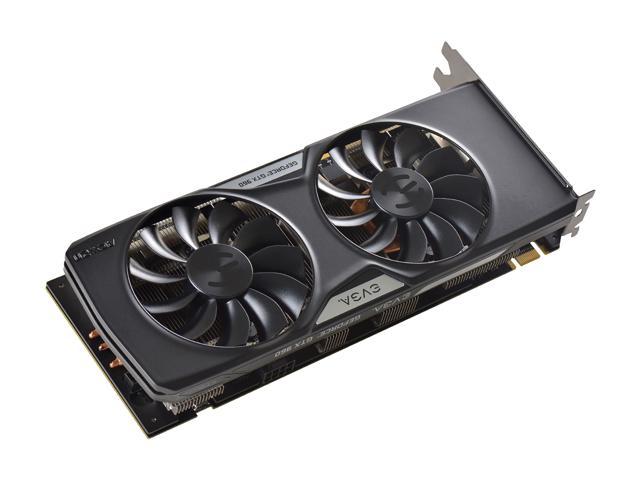 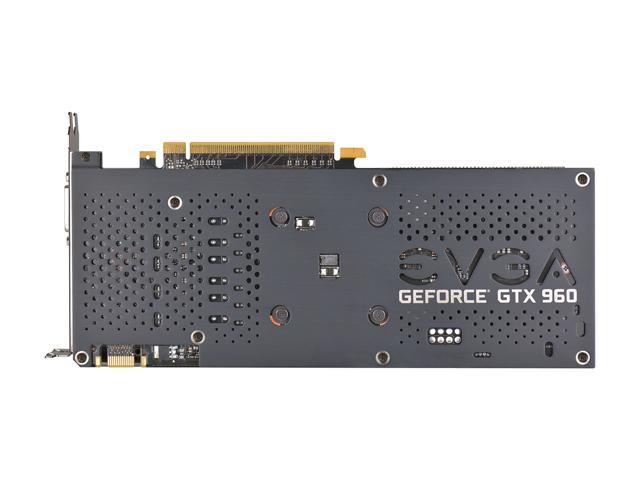 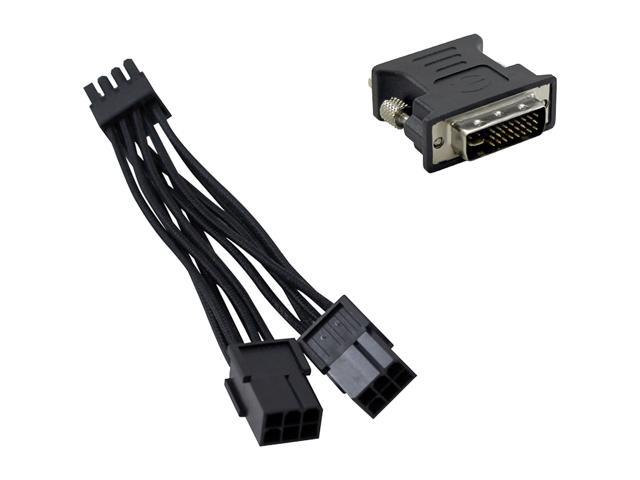 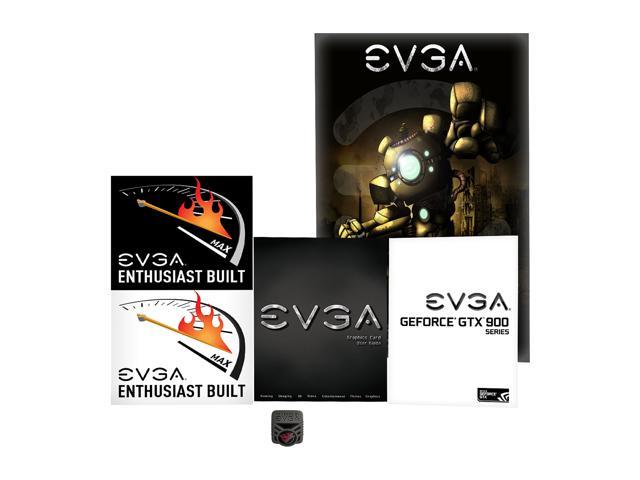 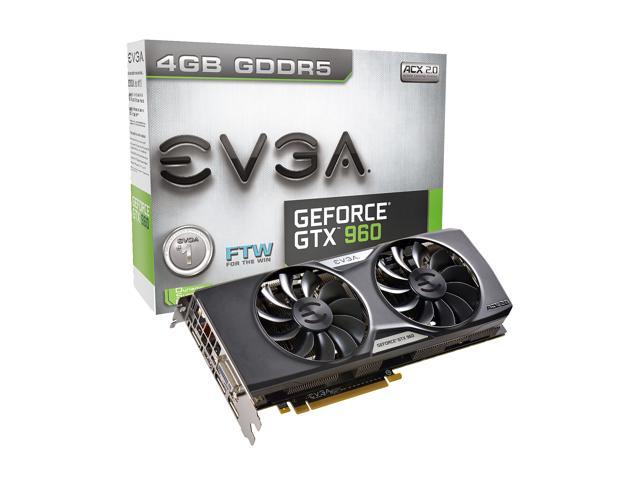 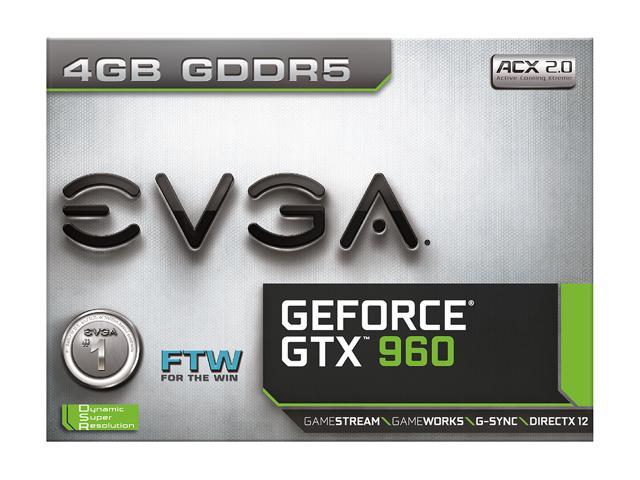 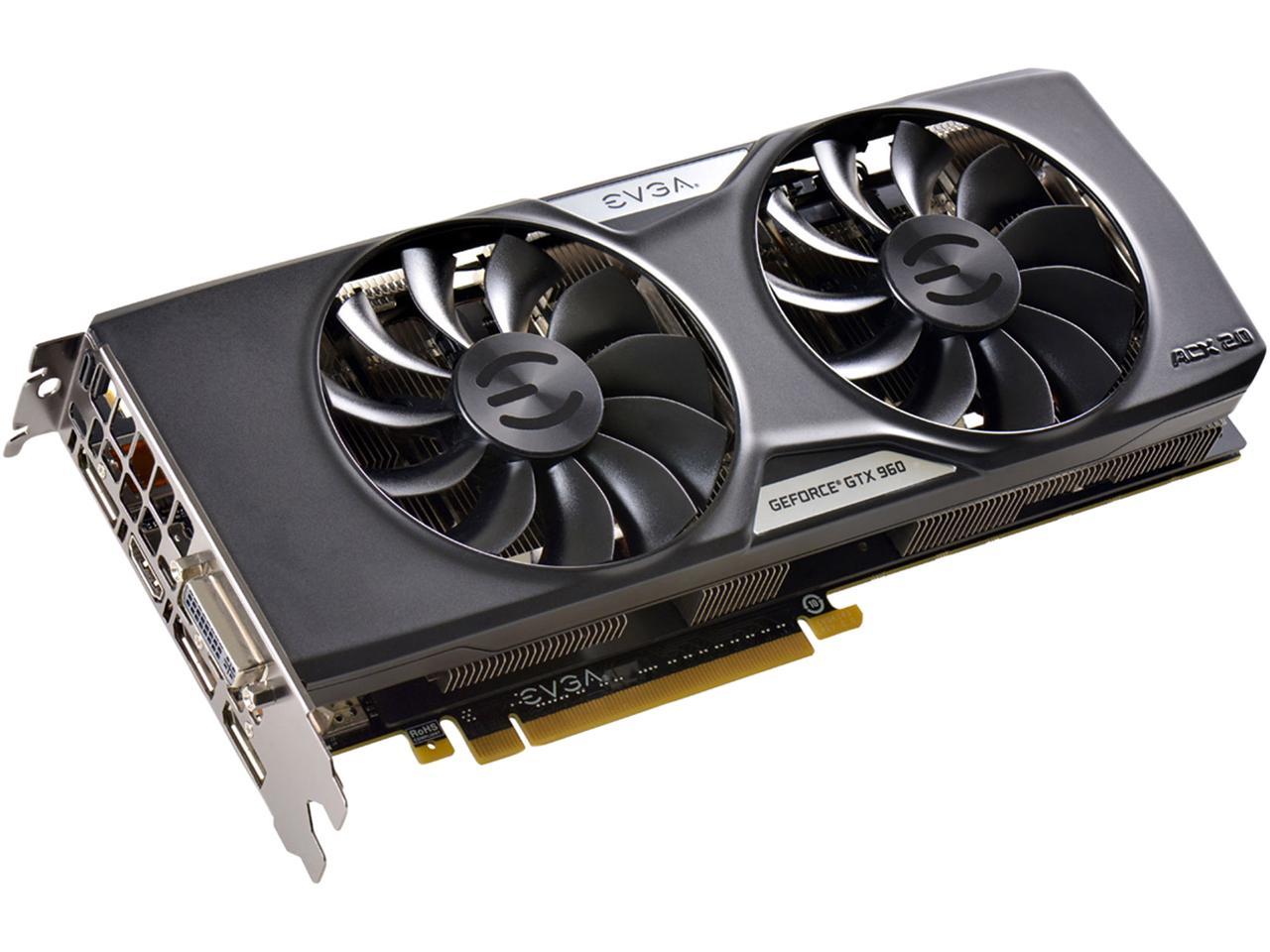 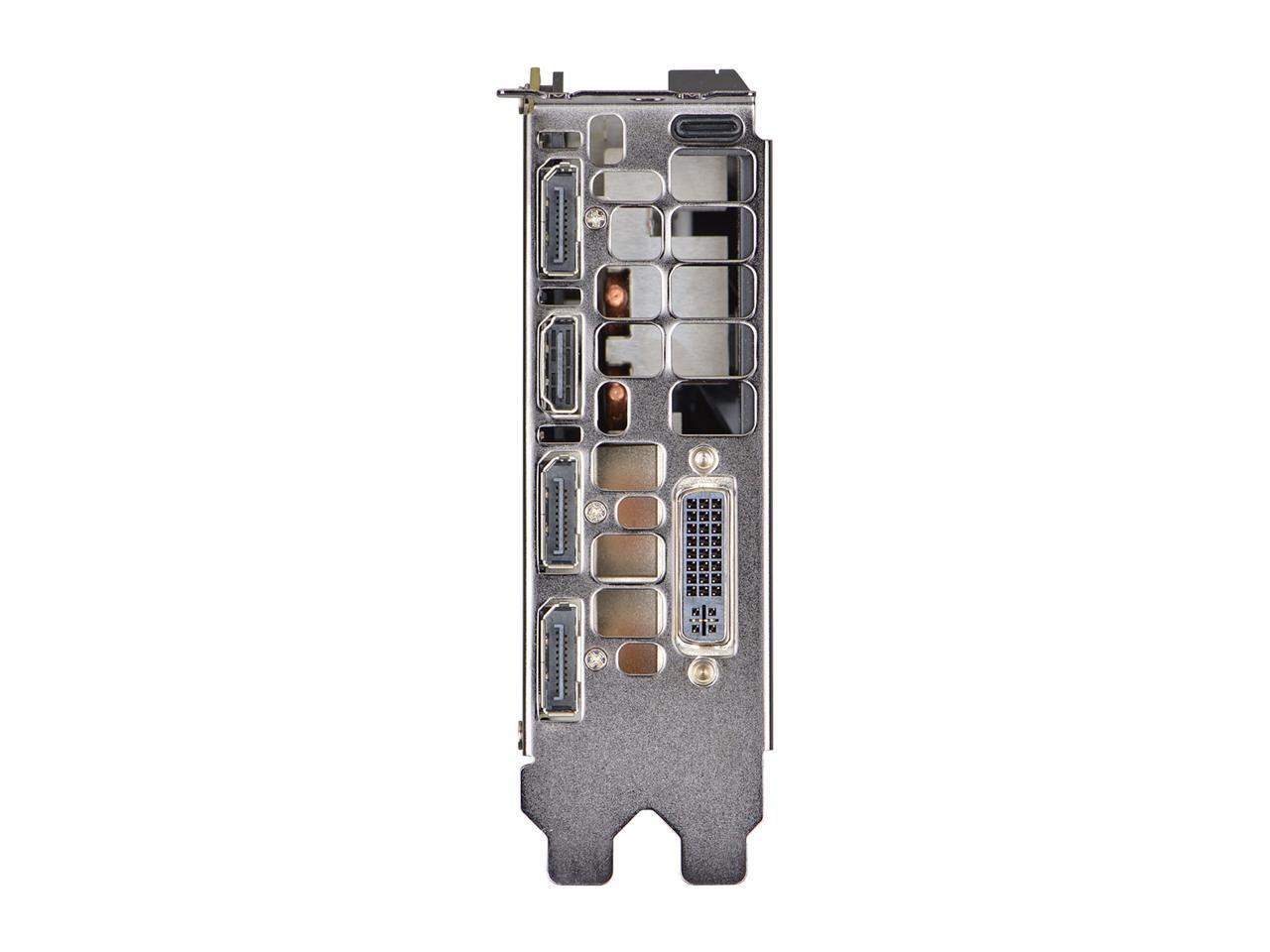 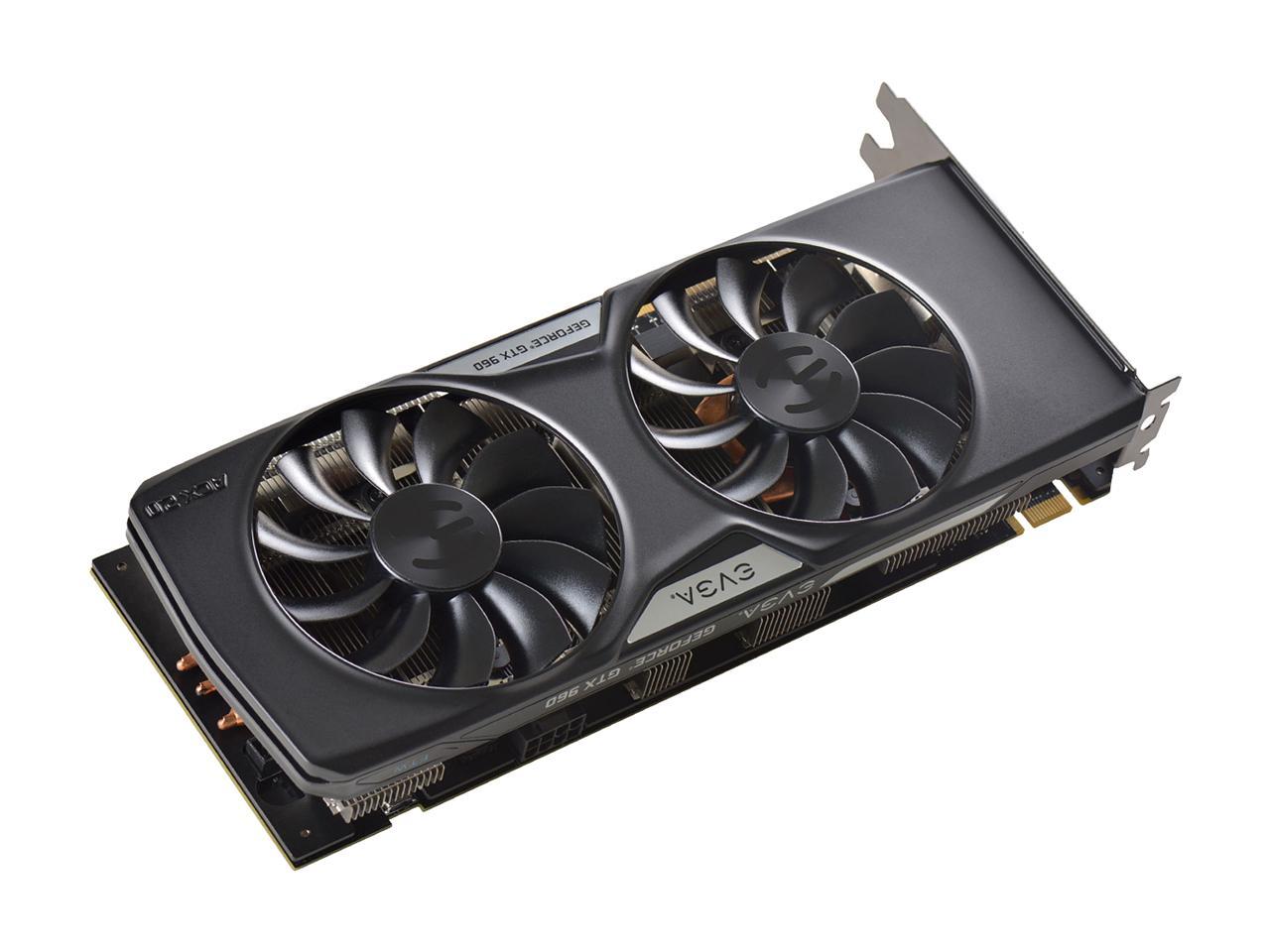 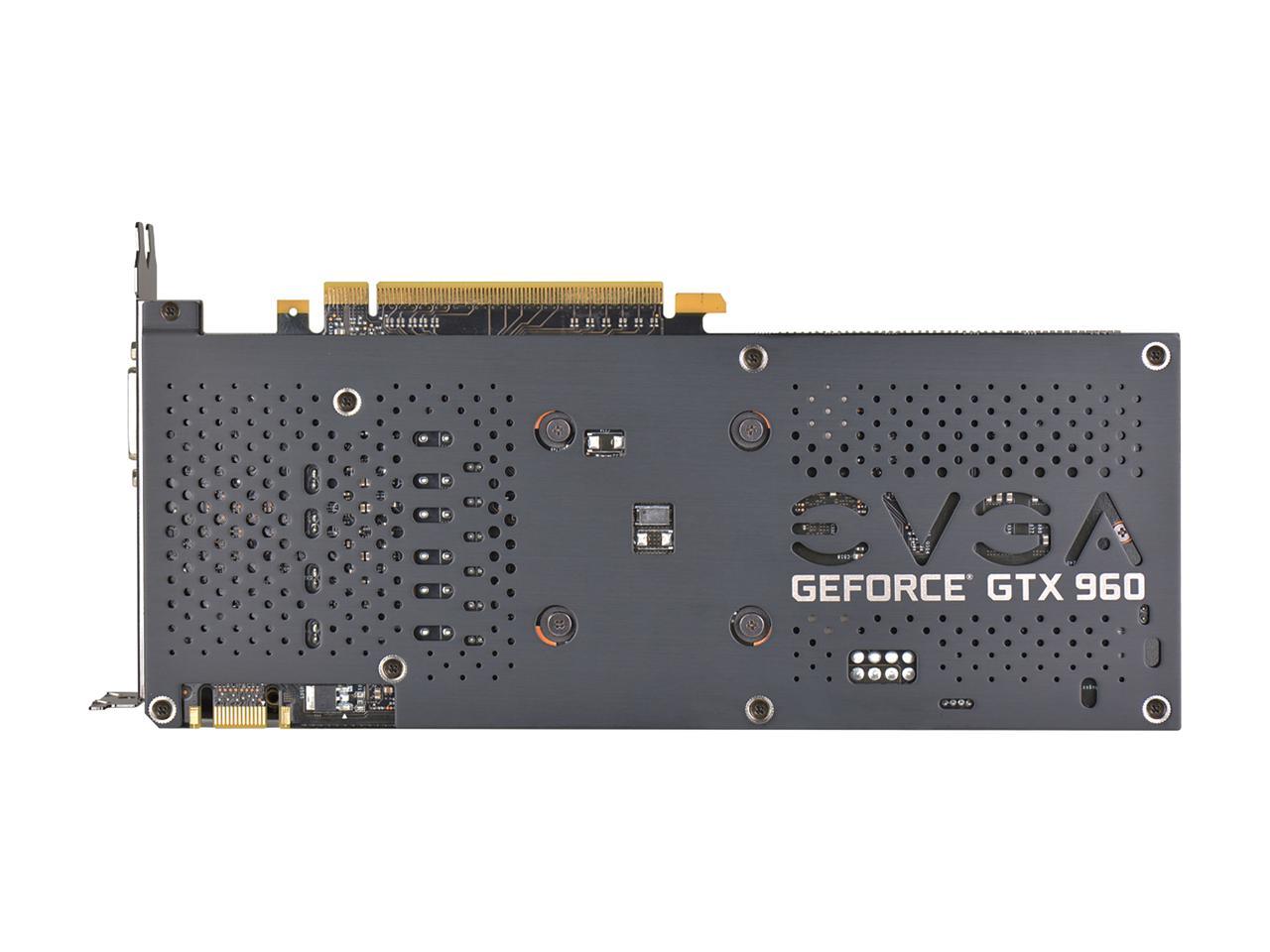 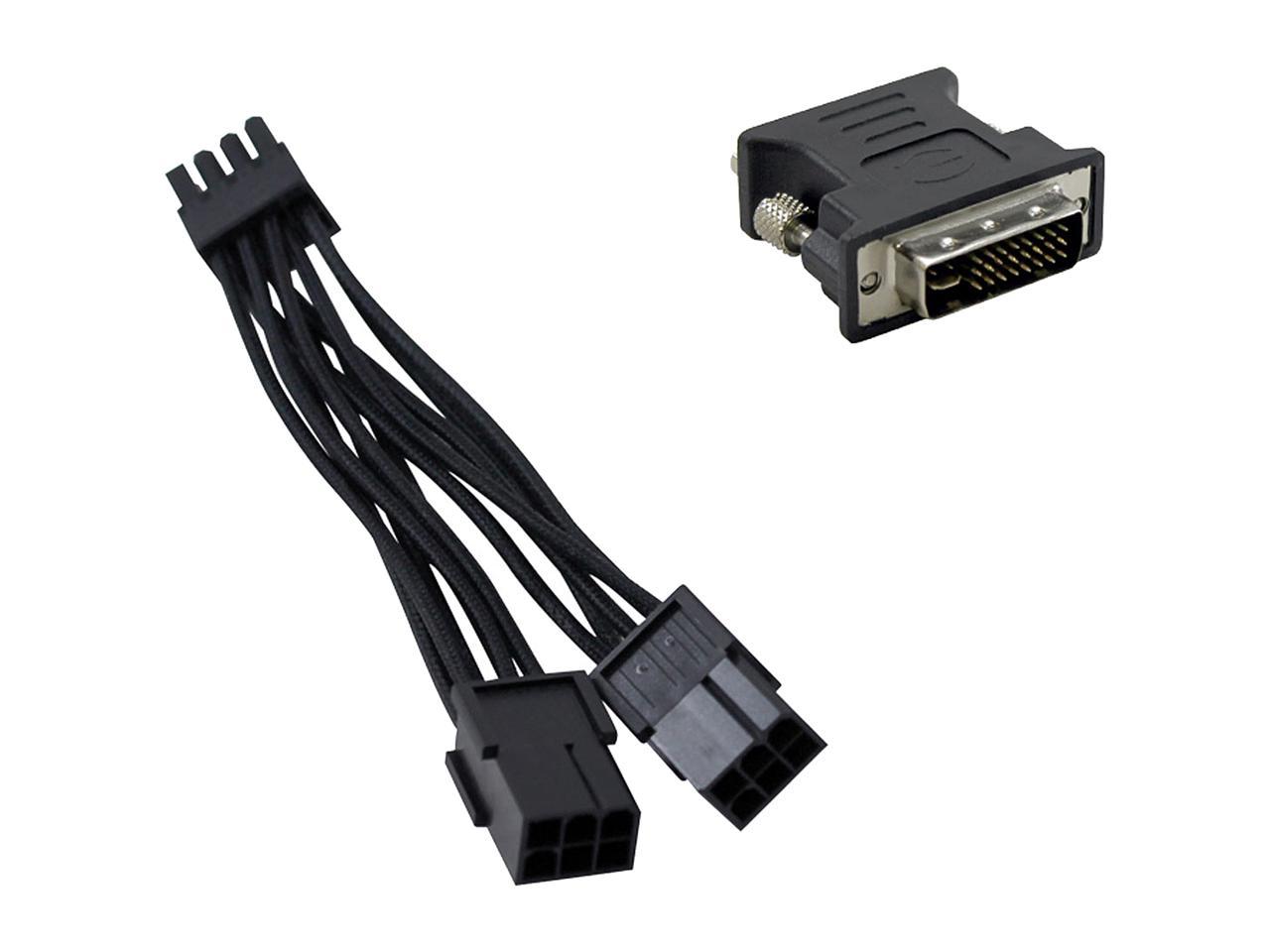 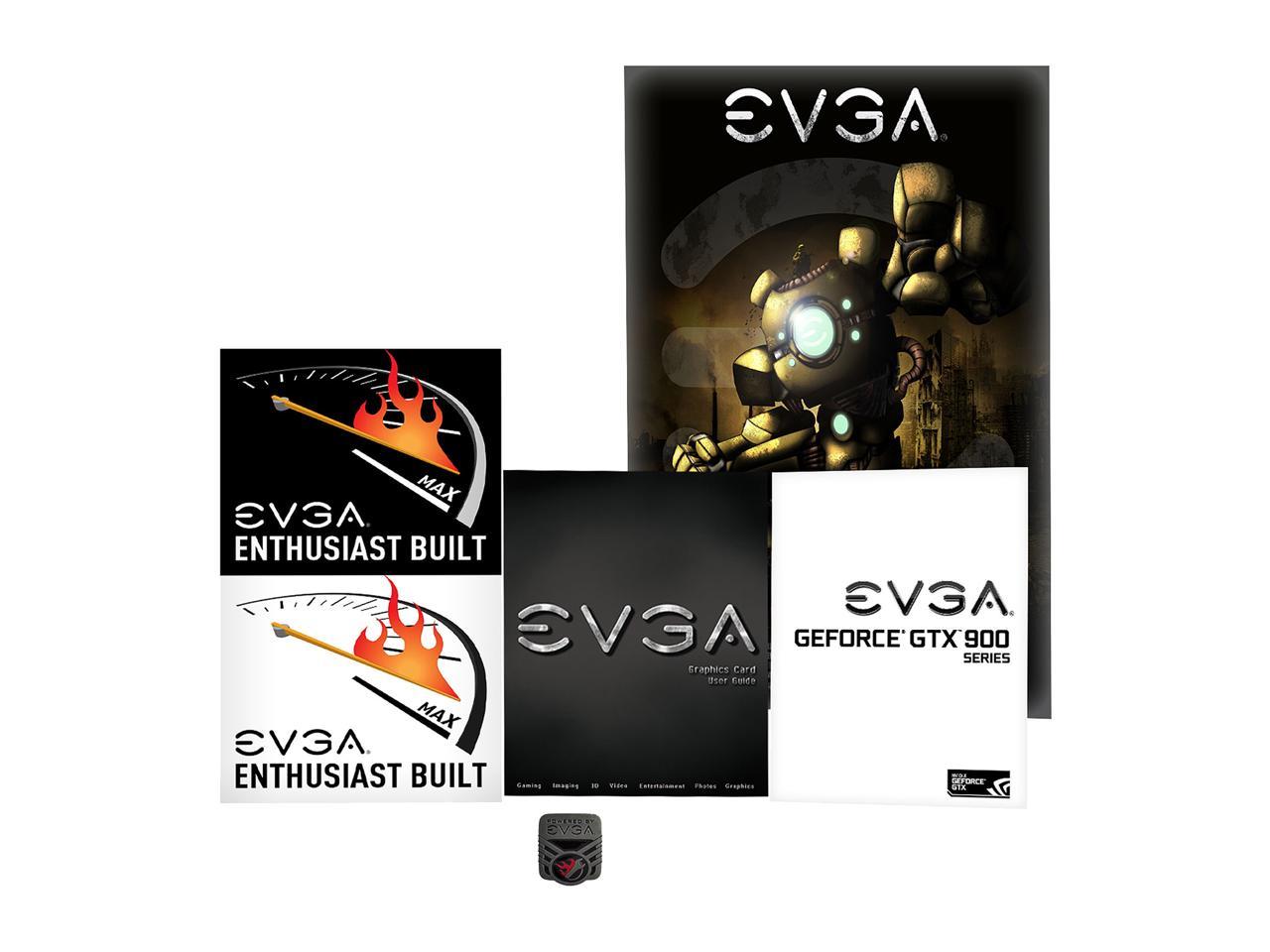 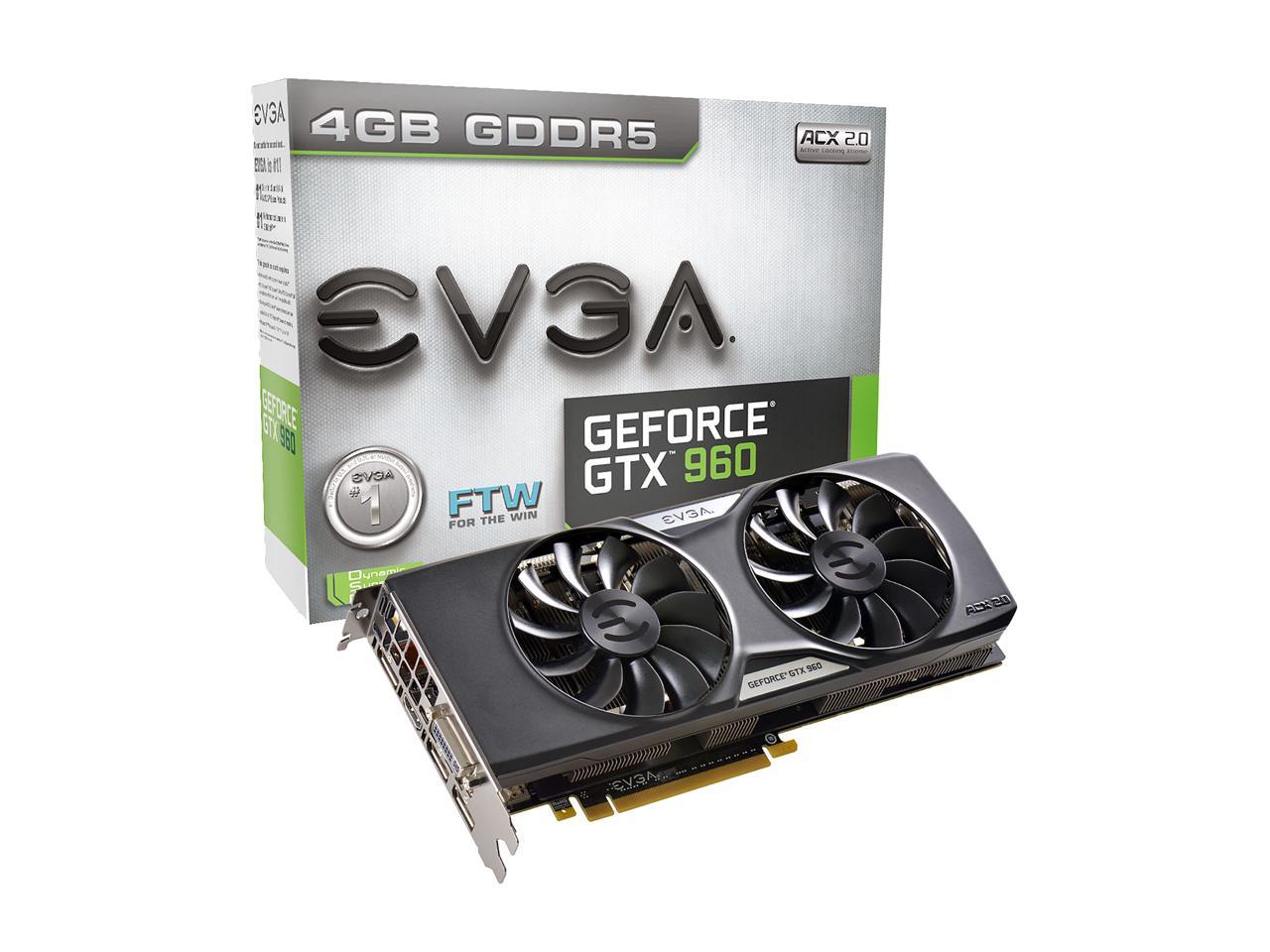 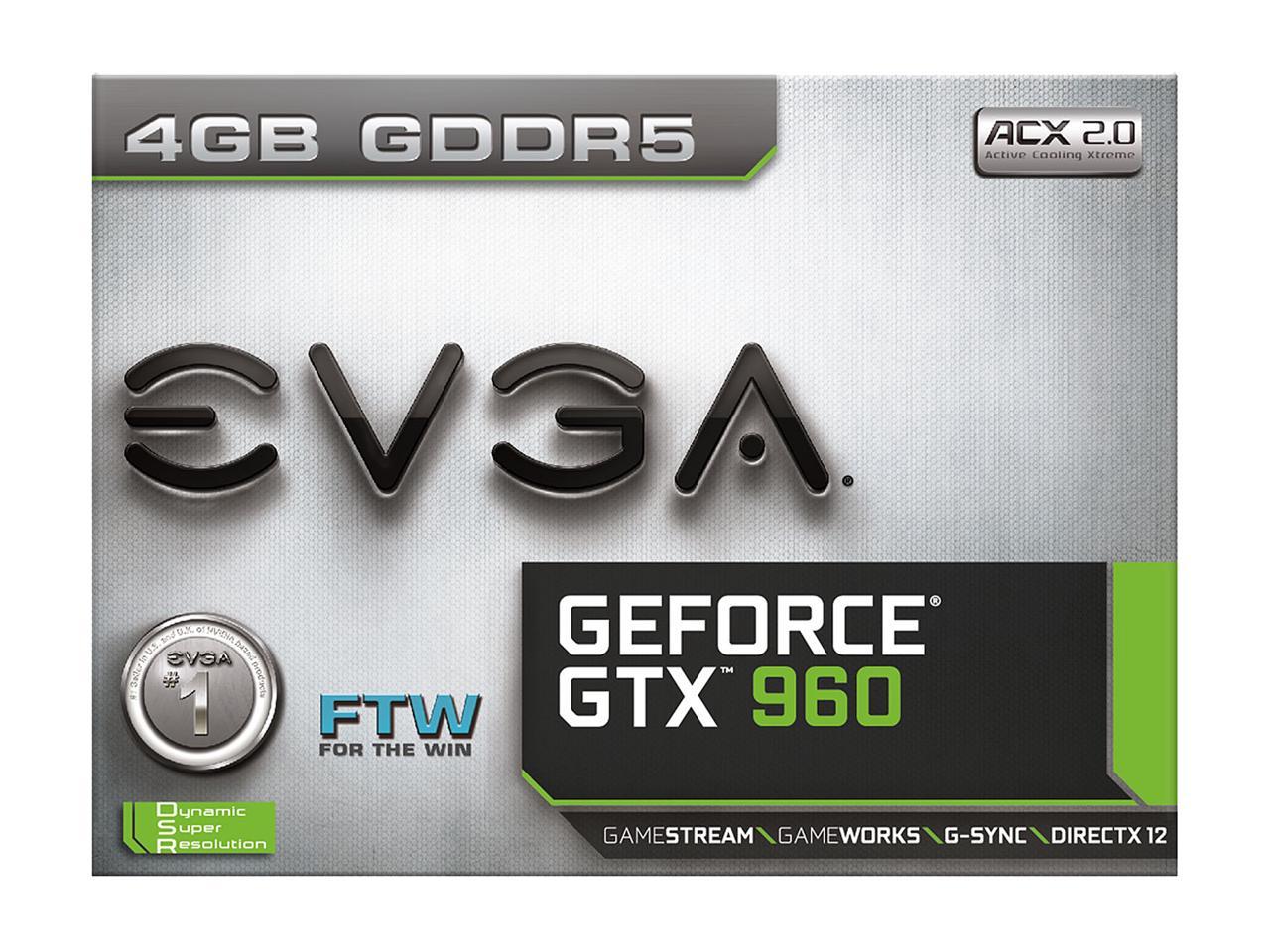 EVGA ACX 2.0+ coolers are 26% cooler than reference, giving you the coolest and highest performance possible.

EVGA's ACX 2.0+ fan turns off below 60°C, generating absolutely no noise during medium load, and whisper silent operating during gaming.

EVGA's power target (max power headroom) is precisely tuned for the perfect balance of thermal, power and performance, offering up to an increase of 33%.

EVGA's full size cooling plate makes direct contact with the memory and VRM (Voltage regulators) reducing memory temperature by up to 14% and VRM's by up to 47%.

Multiple integrated BIOSes allow for an enthusiast to save, set or backup easily.

Pros: -The FTW logo looks rather neat inside the case and it provides a nice little boost over the standard 4gb SSC. (This also applies to the 2gb Variant.) -Its design looks really professional! -I connect it to a 1080p TV every now and then and the image quality looks great. -This card also allows for people to use Nvidia Surround even when mix matching types of visual cords as well no problem! -ACX 2.0+ does its job well of cooling down. Even more when the fans spin. - Factory overclocked out of the box. (Which is good for beginners who don't want to mess with overclocking) -EVGA's sweet warranty. (Just in case if something happened and i need to replace the card.) -Dual BIOS /w an on card switch. (Just in case you may have made a mistake when overclocking or something.)

Cons: ~ If SLI just isn't your thing then i guess you could just ignore this last part. ^^; -The fans are too quiet. (That's just me though. -The size on the card is average but if you plan on running SLI i would say get a motherboard with some space between the cards and maybe a bigger case. (Its hard to believe that there are some cards bigger then this one. Like way bigger.) -The fans aren't on by default and don't start spinning till around 60c, which might not please some people but this con is easily adverted by using certain software like EVGA Precision X16.

Overall Review: - I wish the FTW sign on the card was illuminated but that might be asking to much. -It also came with another cord for an 8-Pin power. (Not sure what its for. Chaining maybe?) -Final Thoughts: After doing a lot of research (AND i do mean a lot!) i finally decided to get an EVGA 960 for my first build. I was originally going to get the 2GB ACX2.0+ SSC one and call it a day. Then once i found out there was a 4gb Variant with a really awesome name, 4GB ACX2.0+ FTW (which totally fits the card you.) and with an even greater power to price ratio... i just couldn't resist that. When i opened the box i felt a feeling unlike never before and it was then i knew- I can legitimately say this has been one of those purchases that a man can make that they can never regret for the rest of his life.

Pros: This card is a great graphics card in general, with a fairly mid-range cost (Bought mine for $234) for a product of good features. -4GB of VRAM -High Base Clock (1304 MHz) -Stays VERY cool, around 26 Celsius idle and NEVER goes above 50 degrees Celsius on ANY game I've got (Crysis 2, Skyrim, Far Cry 4, Witcher 3...just naming a few) -EXTREMELY Overclockable: Overclocked mine to 1505 MHz, and that isn't even my max overclock, cuz it still doesn't push past 70 celsius on load. -Performance: Smashing. Mostly 50-60 FPS and sometimes more on Triple A titles on Ultra settings on 1920x1080.

Cons: -128 Bit Bus: Not much of a con, on paper this is a low end feature, HOWEVER NVIDIA's Delta Color Correction minimizes the amount of data having to enter the card's bus thus a 128 bit bus is bearable even with 4GBs of VRAM (I have 0 problems running Skyrim and Fallout 4 with very High resolution textures from mods (4096x4096 for Skyrim; 2048x2048 for Fallout 4) and use close to 4Gs of VRAM, usually 3.8GB in Skyrim with my 250 or so mods.

Overall Review: Did do a $15 Mail-in rebate on this card, striking this card from $249 to $234, however I believe EVGA has changed this card's rebate to a $20 or $25 one recently, not sure, check for yourself if interested, it is worth it. Also, SLI'ing this card is definitely worth it as the price is less than a GTX 980 while performing slighly better. If DirectX12 does come through and stack VRAM in SLI you've got an insane 1440P60FPS performer for less than $500. This is just a thought about reviews: If you get a defective product don't bother writing the review until you receive a fully functional product. The majority of products sent out are functional and having a "Blah blah Doa junk" review is just useless and bad etiquette.

Cons: Haven't found one yet!

Overall Review: I bought this as an upgrade from my XFX Radeon 7950 3gb since, after 2 years of owning it, it finally started to have problems and needed to be retired. I switched to this card purely for the price, which was $189 for a 4GB gard, unheard of for EVGA most of the time. As soon as I loaded up Fallout 4, it set itself to Ultra, whereas I could barely run Medium settings with my XFX. Everything else graphically demanding like Tomb Raider and Star Wars Battlefront have had no problems at all and ran buttery smooth, which makes me wonder if the recommended specs for those games were really accurate. I decided not to go with the 970 or 980 since they were way out of my price range (I don't like spending more than $200 at most for a new card), but I scored big with this one, runs everything perfectly and I've yet to find a bad thing about it.

Pros: I purchased this card as part of an upgrade to a six year old computer system. Added SSD drive, 16GB ram, EVGA video card and Windows 10 upgrade. System boots in less than 8 seconds and can run all games at high frame rates. No install or driver issues.

Cons: None that I can think of other than Newegg's constant price changes. Bought this card a week ago at 189.00 with free shipping. Went back to buy another one this week and price had jumped to 240.00 plus shipping. I'll keep shopping for a lower price.

Pros: I can handle all current gen games at 1080p max settings on everything, even next gen games on max settings like star wars battlefront. On BF4 I can go up to 150% rendering resolution and the game looks absolutely beautiful with ultra settings on 1080p. I have absolutely no problems with screen tearing or any graphical problems with the drivers. Overall very solid card and I would recommend to anyone. Cant wait till my next one comes in and the even better performance of SLI. Fans are silent even when the cards working on full performance Overclocked. (While gaming on high-end games like bf4 it never goes over 40 degrees Celsius. My system build is ddr4 ram 3200 i5 6600k skylake 4.9 ghz and with a 1080p monitor.

Overall Review: Other than the graphics card being really big, which for some people is an issue. make sure you measure the dimensions with your case before you buy!

Pros: - Quiet even under load, barely noticable - Runs very cool - Awesome to play on ultra settings - Will get a second for SLI when I get my 4K Monitor!!!!

Overall Review: - Will recommend this to everyone!!!! - Will be buying a second!!!!!

Pros: The card installed easily, the 6-pin to 8-pin power conversion cord included was necessary for my computer, and I appreciated it. Covers and slips and films were all a nice touch to keep the card and it's ports clean both during transport and use. The fans are quiet on lower power, and my gaming so far hasn't even turned them on, except during my manual test to make sure everything functioned properly. 4gb on this card has me feeling very future proofed for at least a year or two. It pulls more than it's weight in my AMD 3800+ single core system, and has increased framerates moderately, as well as reducing CPU load (away from my onboard CPU chipset video that I was using). I am very pleased with this purchase, and look forward to testing the real power of the card when I next upgrade my CPU and motherboard to match its power.

Cons: The only negative I have about this card is a VERY minor quip; The port covers are very firmly inserted and difficult to pull out after the card is installed.

Pros: This card is amazing! I'm running ESO on Ultra & it looks beautiful at a constant 60+ fps, roughly 45fps in over populated areas. Haven't tried overclocking it yet, but not sure if i really need to.

Cons: Fans don't kick on until the card hits 60 degrees Celsius. Definitely recommend using EVGA's Precision X to set the fans to kick on sooner. That's just my personal preference, don't like the card getting so hot.

Overall Review: Went off sale the day I was able to purchase, so unfortunately had to pay the full price. Still worth it!