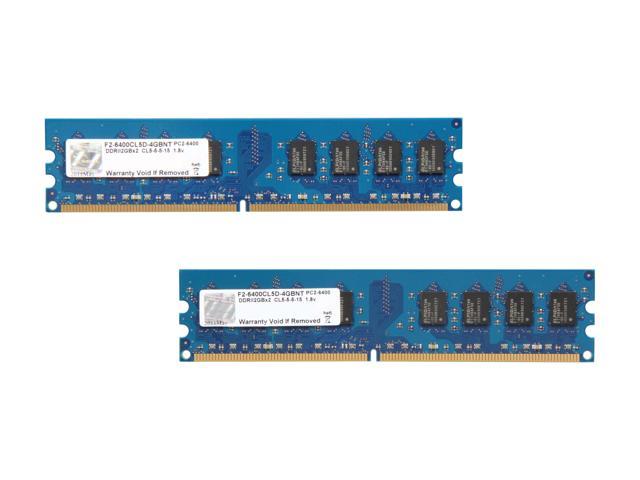 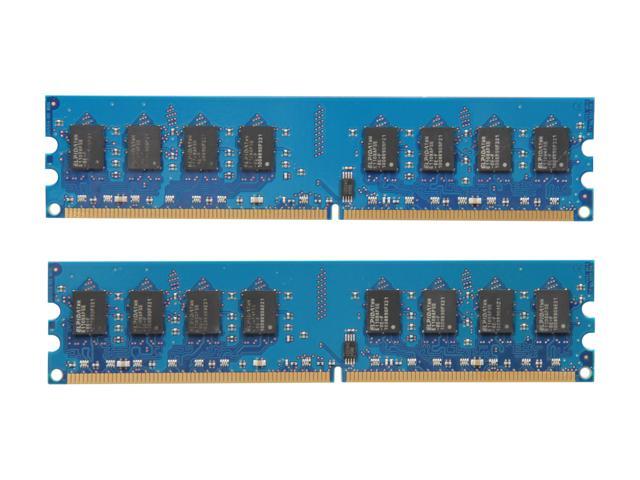 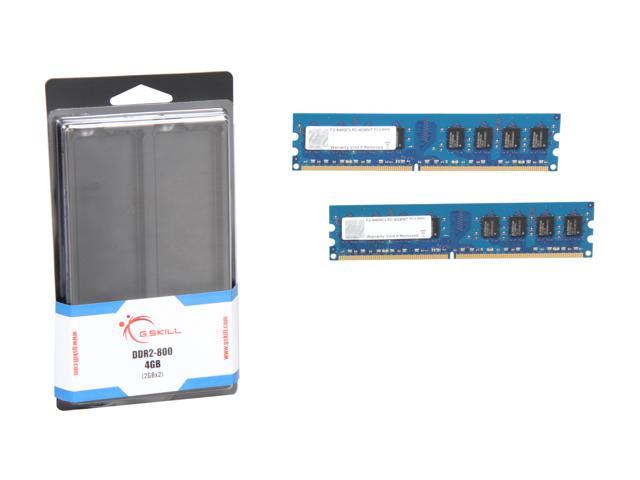 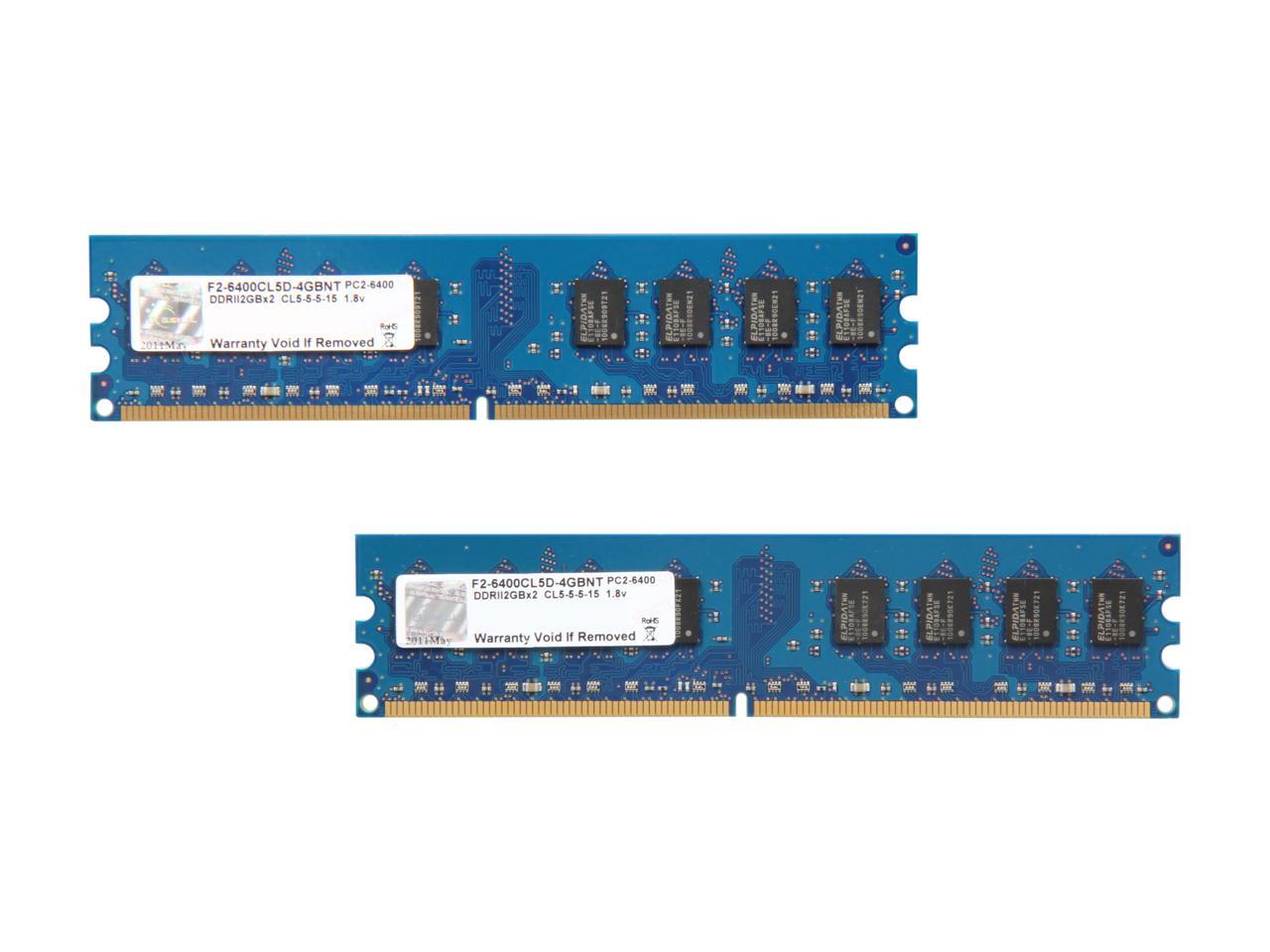 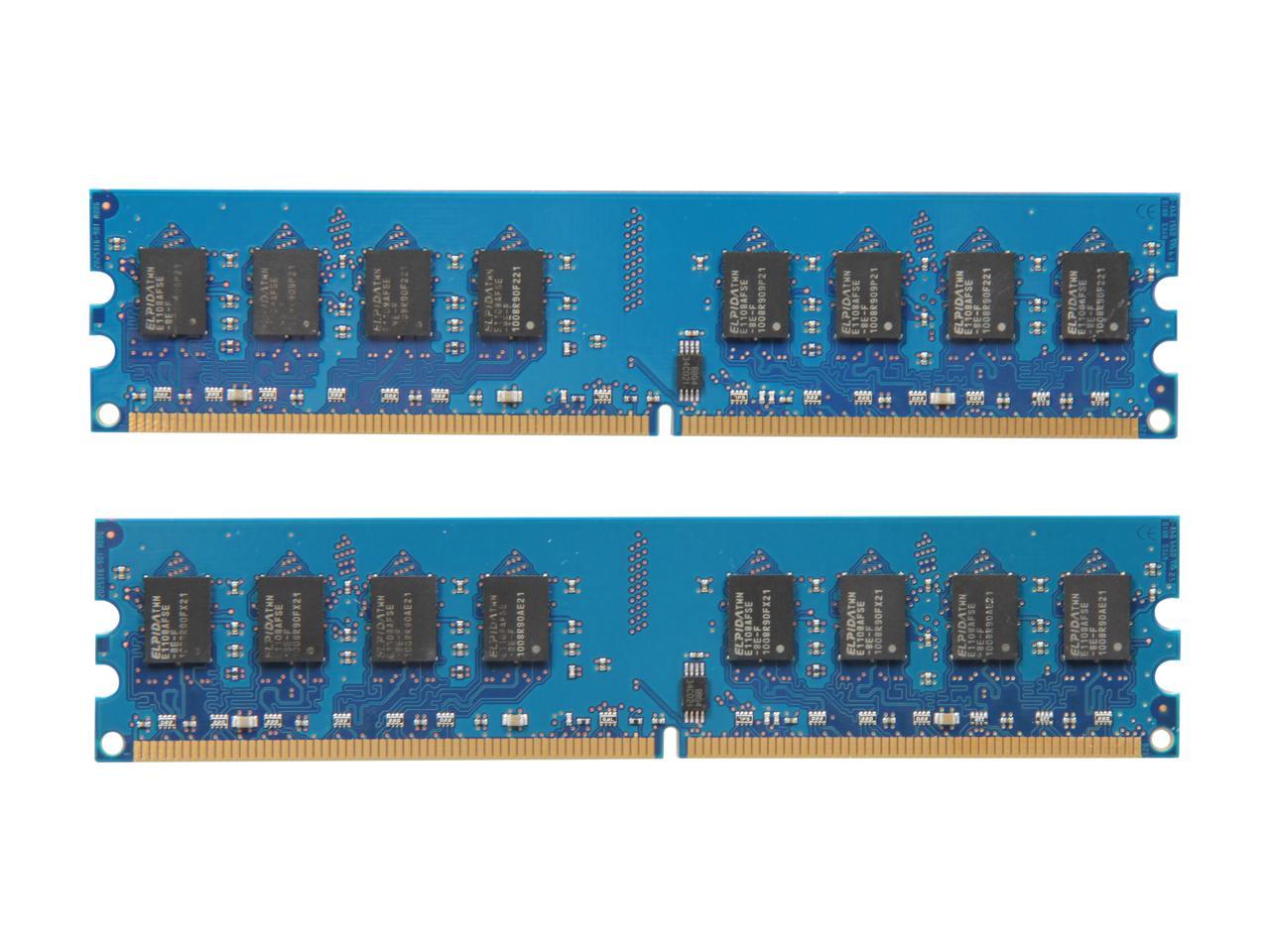 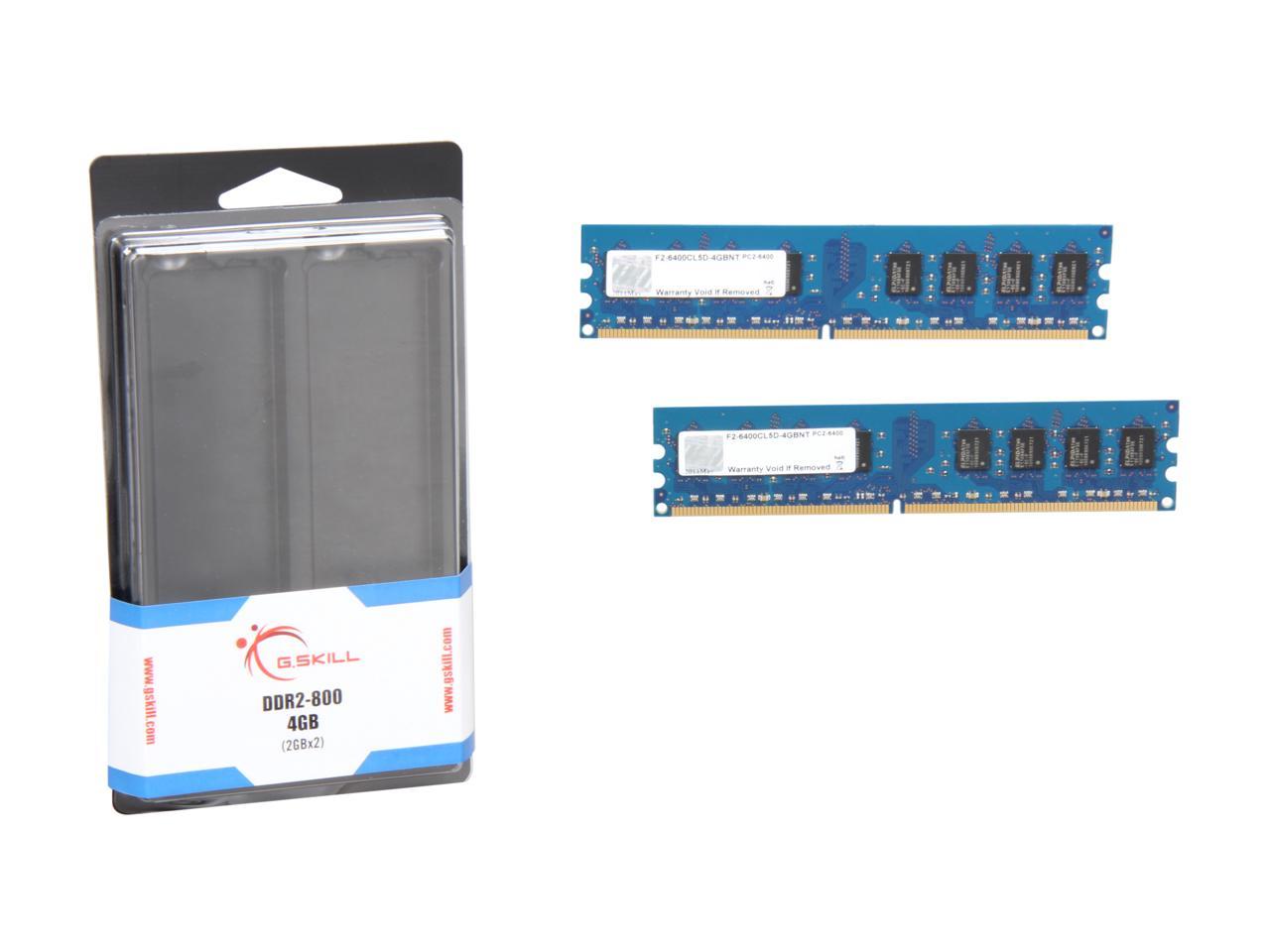 Pros: Good cheap upgrade from the Dell Dimension 9200 it was installed in. Upgraded from 1GB to 4GB and installed Windows 7 64 bit brought the PC back to life. The cost was great compared to other kits. I've never had issues with G. Skill memory ever!

Cons: No cons. Maybe a RAM cooler, but that is all, but for the price it was right.

Pros: Was having a problem with a workstation (a problem that no one can figure out). I was hoping the memory was the issue, but this memory did not fix my problem. Granted this memory does work as you would expect. Passed all testing.

Cons: Did not solve my problem, but did tell me the problem was not the memory.

Overall Review: Decided to keep it since it is a good brand, and DDR2 costs will continue to rise.

Pros: I updated a client's machine as they were running Windows 7 64-bit on 1 GB of RAM and were pinning the RAM down to 99%. This breathed new life into her 5 to 6 year old machine.

Cons: Somewhat pricey for the amount of RAM, but hey, it's older DDR2

Manufacturer Response:
. Dear Customer Thank you for your G.Skill purchase and review. Glad to hear this memory was able to revive an older machine. Improved performance should be night and day. This is one of our most popular kits as it is easy plug and play installation. It is also compatible with most DDR2 computers. Unfortunately, it is limited DDR2, so the pricing will reflect that, but it is surely much cheaper than purchasing a new computer. Should you have any questions or concerns, please feel free to contact us directly. Thank you GSKILL SUPPORT Quality and customer service are our top priorities. Tech Support Email: ustech@gskillusa.com RMA Dept Email: rma@gskillusa.com G.Skill Forum: http://www.gskill.us/forum/
Dominic J.
Ownership: more than 1 year

Pros: Great sticks! Plugged it into a system with just 2x512 sticks. With 4GB there's nothing holding it back now!

Pros: Worked good... The fact of the matter is that most people don't realize any differences in RAM speeds unless they are really dinking around or gaming. I realize scientists and engineers may need faster RAM, but 98% of the population needs cheap DDR2-800 without heatsinks. This stuff doesn't get hot even if i run Prime95 all night...even though memTest is all anyone should ever need to do with RAM. I don't overclock...for those who do, just regard said message and move on to a different review.

Pros: Runs at advertised clocks (5-5-5-15) at standard voltage, without having to do manual or "performance" setup. This is important, because many other makes and models of memory require special setup or don't actually run at advertised specs.

Overall Review: No gimmicky heat spreaders. Heat spreaders are not the primary means of cooling memory, and they cost more and take up space. They don't make a difference unless you are going for a maximum overclock and have to run your memory overvoltage. If that is your game, this memory is not for you anyway.

Pros: -Boosted performance and extended the life of my old 2009 desktop. -Easily installed (No fancy heat spreaders. This was an important consideration since my case has very little room). -I've put G.Skills brand memory in three computers now with very satisfactory results. It's a brand you can trust.

Cons: This is a really stupid con, but the DIMMs are actually green, not blue as they appear in the picture. My mobo is blue and so were the original DIMMs, so I was hoping to keep everything matching. But this has absolutely no affect on performance obviously, and it's entirely preference. It's a little surprising that DDR2 memory still costs this much. You can catch some DDR3 for about the same price on sale sometimes.

Overall Review: Obviously this isn't the fastest RAM out there, but, if you have an older computer that can only accept DDR2 memory, this is a rather cheap way to boost performance a bit. I put this in an E-machines EL1310-02 that I bought in 2009 that I dual boot with 32-bit Win7 and 64-bit Linux Mint. It originally had 2 x 1GB of OEM RAM. After this upgrade, it's maxed out at 2 x 2GB (Mobo and 32-bit Windows will only support up to 4GB). I've noticed significantly less hanging, especially when I have multiple browser tabs open in Windows 7(opening more than 2 youtube tabs would usually hang the browser for up to 30 seconds). However, for whatever reason, the same does not appear to be true in Linux Mint. Unfortunately, the extra RAM doesn't help graphics in my case, but this is a limitation of my Mobo. My PC has graphics integrated into the Mobo (not the CPU), and the BIOS is defaulted to dedicate only 256MB to graphics. This can be manually increased to 512MB but no further, and doubling it really doesn't seem to help much anyway. However, this would not necessarily be true for other PCs, depending on your mobo and CPU; it's just something to keep in mind. The speed of the memory would probably be more important for this application anyway.