Feel 100% satisfied with your purchase -- with no restocking fees & no return shipping costs* within 30 days of delivery. Learn More
Newegg’s gift-wrap service is the ideal solution for making your gift special! Select your item as a gift, then add your message. Your gift will also be discreet with no prices being included on the packing slip.
Price Alert
Add To ListFound on 27 wish lists 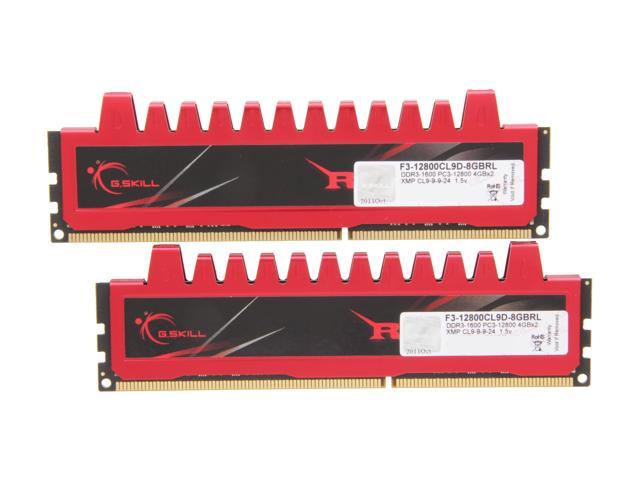 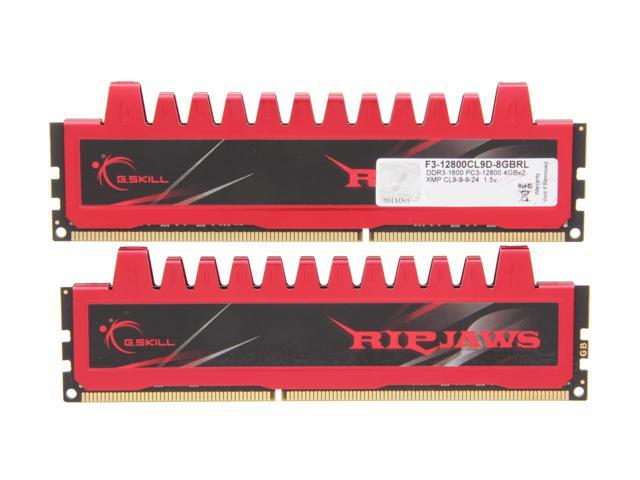 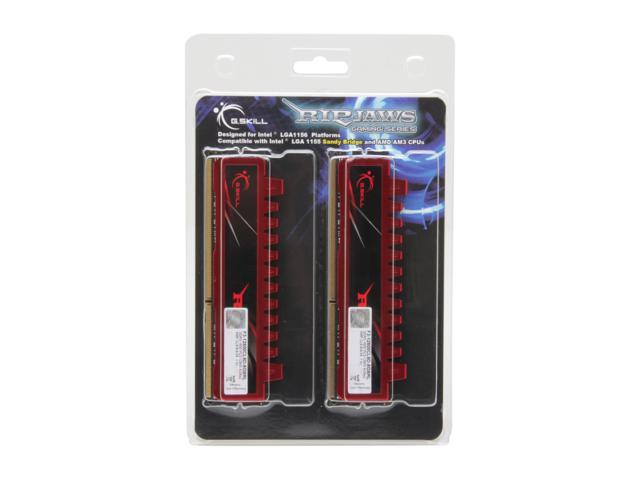 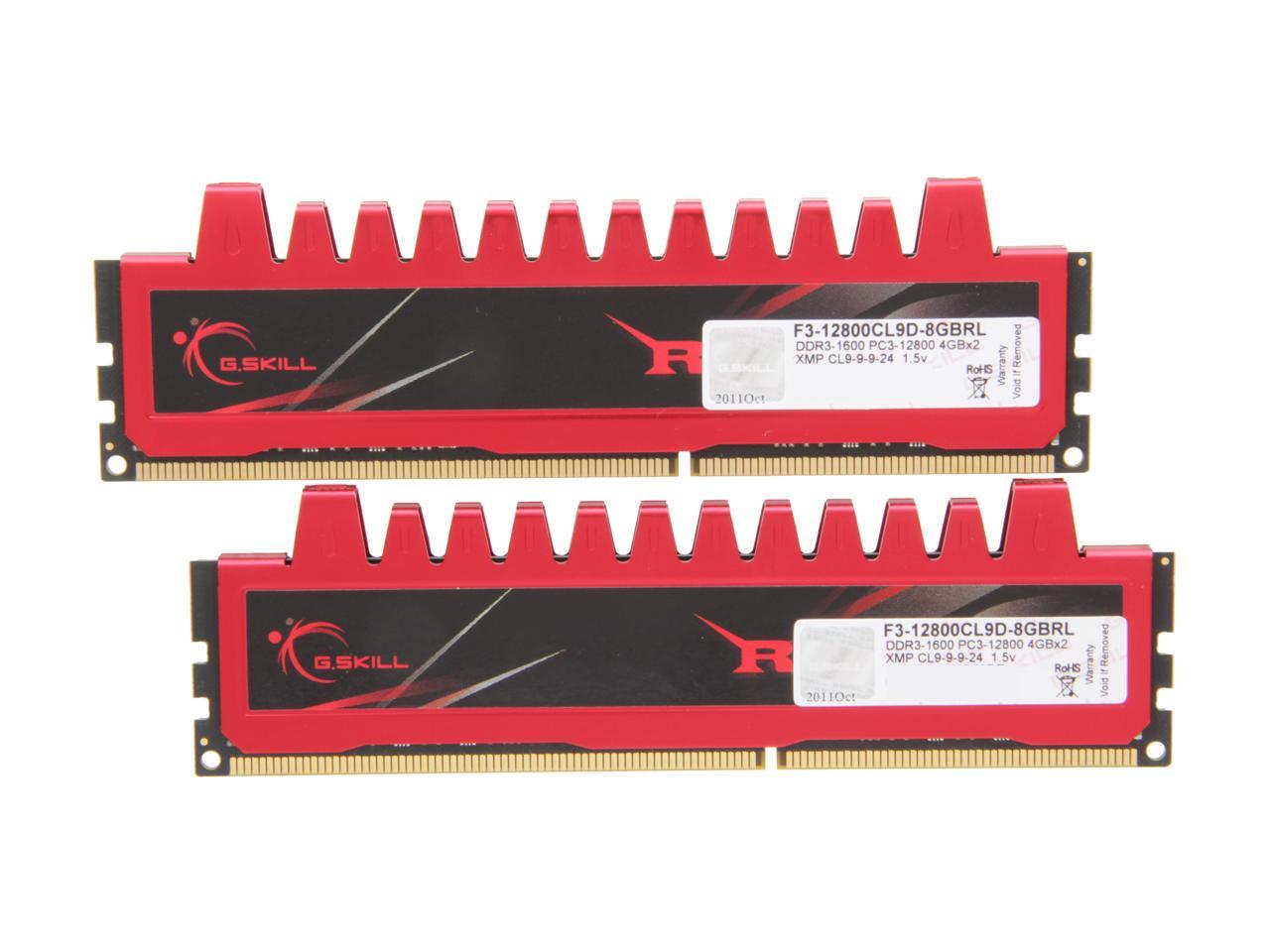 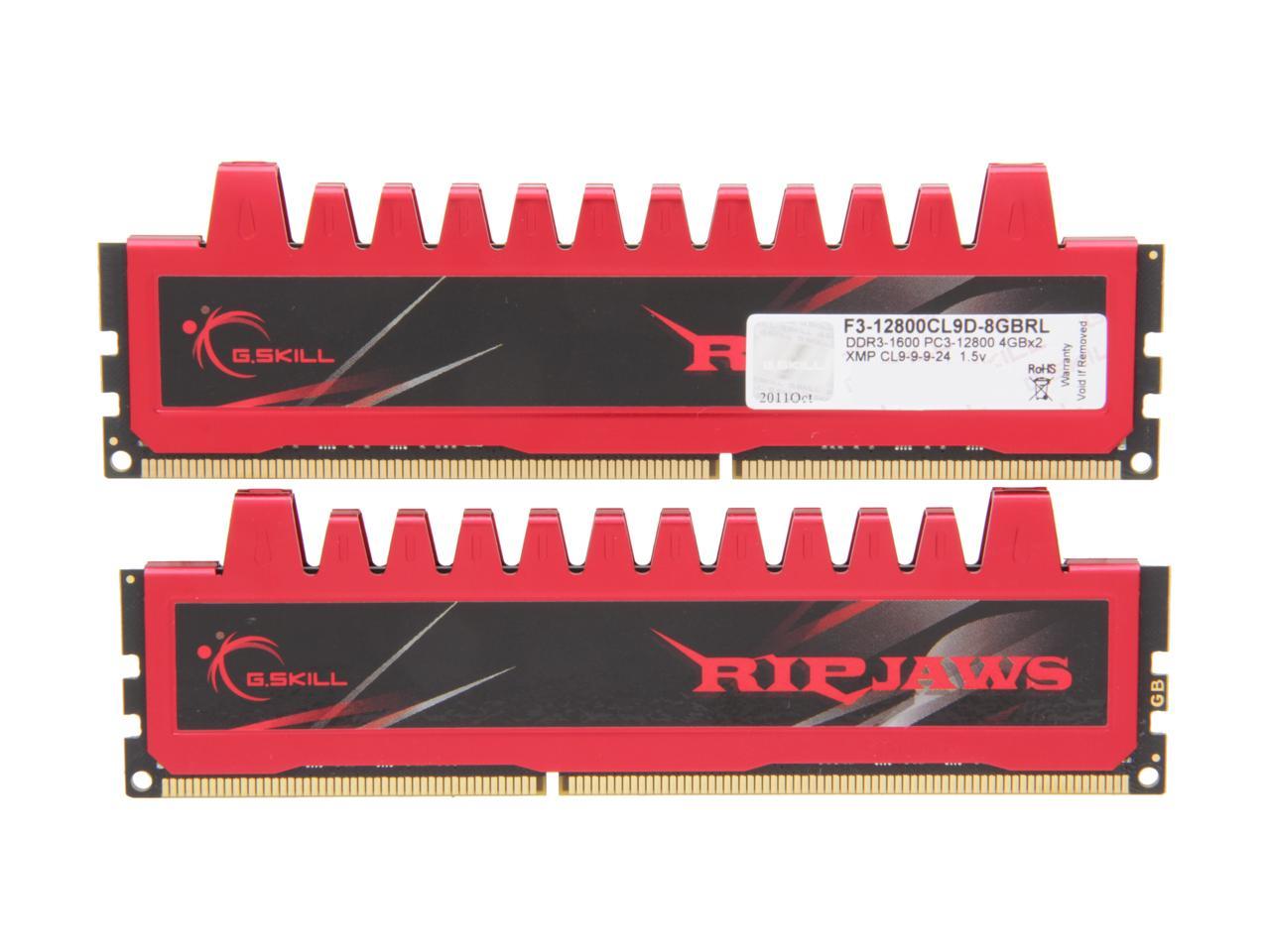 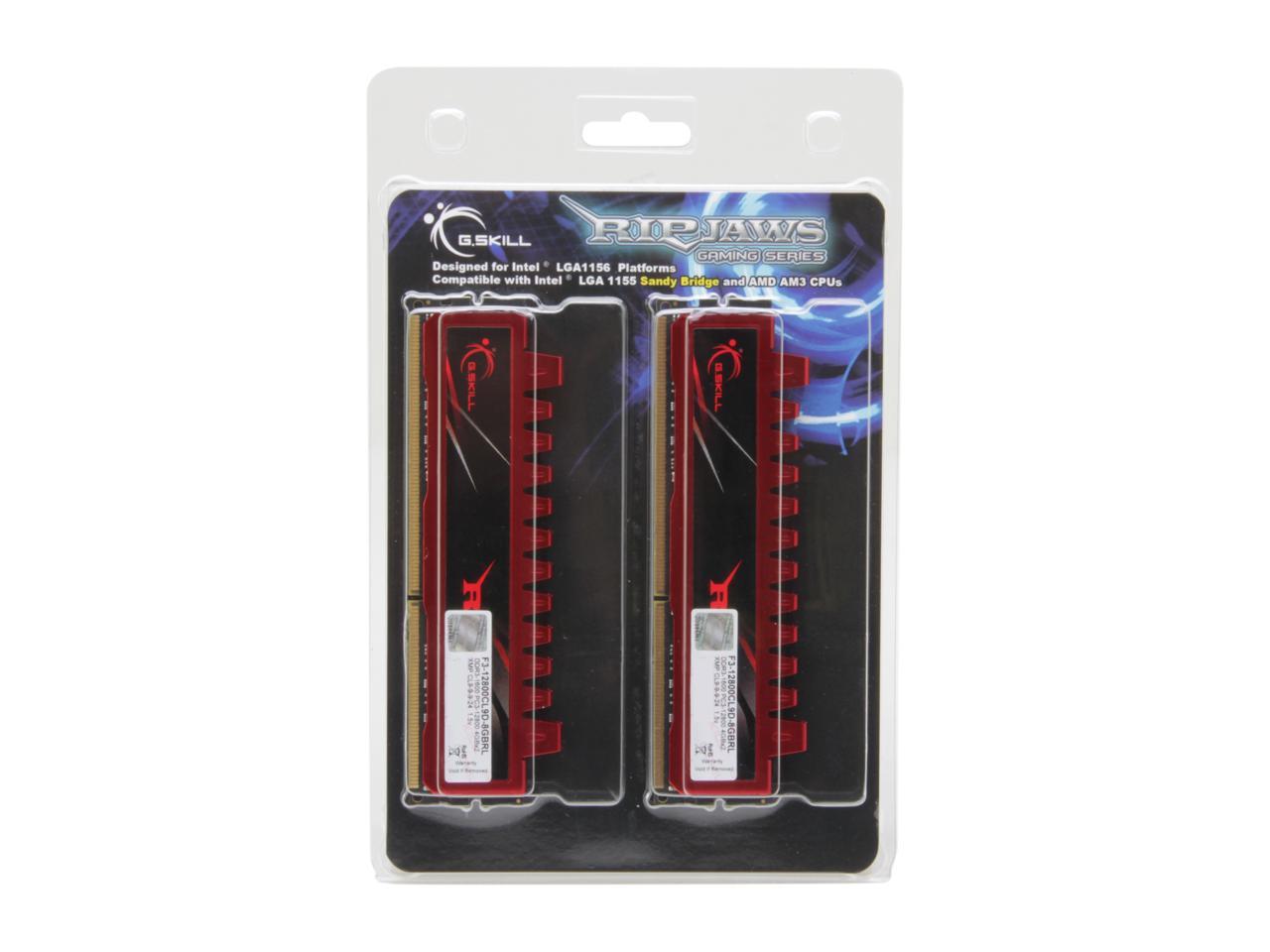 (2,243) Write a Review
Lowest price
in 30 days
See more "ddr3 ram"
In stock. Limit 5 per customer.
Ships from United States.
Overview
Specs
Reviews
This Ripjaws Series memory kit is designed specifically to complement the dual channel based chipsets, and eliminates data bottleneck by doubling your memory bandwidth. Optimized for speed, low latency and high stability, Ripjaws Series memory is the perfect solution to overall more responsive system.
Heat management is always important for any PC builder and enthusiast. G.SKILL understands this concern, which is why each Ripjaws Series DIMM comes with a stylish comb-like design heat-spreader, which dissipates heat by exposing it to cool air over a greater surface area and will look great in any case. These DIMMs also operate at a cool 1.5V for better internal temperature and compatibility.

Pros: When it works, it works. Nothing overly spectacular, but it does the job. Have it slightly overclocked and it handles it alright.

Overall Review: Newegg RMAd with no questions asked. Took less than a week.

Manufacturer Response:
. Dear Customer Thank you for your G.Skill purchase and review. Glad to hear you were able to get the memory working properly in your system. This is one of our most popular kits as it provides good performance, stability, and the ability to overclock if desired. When installing modules, make sure to firmly press down on each end of the memory. Many memory slots will only have locks on one side, so commonly one side can be half-inserted causing spark and smoke. If inserted properly, it will not cause such problem, so it doesn't hurt to re-install and make sure you hear a good "click". For any further questions or issues, please feel free to contact us directly. Thank you GSKILL SUPPORT Quality and customer service are our top priorities. Tech Support Email: ustech@gskillusa.com RMA Dept Email: rma@gskillusa.com G.Skill Forum: http://www.gskill.us/forum/
Tracy T.
Ownership: 1 month to 1 year

Pros: I always buy GSKILL when given the chance. I had yet to run into any compatibility problems when using GSKILL.

Cons: This RAM does not make my bed in the morning. Seriously, no problems ever with GSKILL.

Pros: Quality design and manufacturing. I've owned other memory sticks with heat spreaders that felt as though they were simply going to break or fall off the DIMM using the necessary pressure inserting them in the motherboard. Not so with this product. Mainly, because the heat spreader design makes it completely unnecessary to apply pressure to anything but the DIMM itself. This would seem to be common sense when designing a product like this, but apparently it isn't always the case. Initial installation in my MSI x79a-GD45 plus motherboard was problematic. Memtest reported multiple failures beginning with Test 3, and if I hadn't researched MSI's website for both that specific motherboard as well as MSI's forums, I would not have known it wasn't at all the fault of the G.SKILL ram, but that of the motherboard itself. A bios update eliminated this memory problem completely, and I've never had Memtest fail using the aforementioned motherboard or this ram in any of the three boards I currently have it installed in. While I cannot say this ram is actually faster than other brands (G.SKILL is all I use for DDR3 now), I can safely say I'm completely satisfied with it's performance in the gaming systems I've installed it in. Games such as the entire Battlefield series save Hardline (I don't particularly care for that addition to the BF franchise), Shadow of Mordor, Metro 2033, Metro Last Light, The Witcher series, Crysis series... pretty much any and all AAA titles out there in the RPG, FPS, RTS, and 4X Strategy genres. I read all the time, as I'm sure many of you do, how this game or that game will not work on someone's system. These claims made by people who swear it's 'not their system', because game X, Y, and Z run, just not game W. Well, if I can play ANY game I've ever installed including these games (pretty much any and every game on Steam or Origin) that people claim are broken, then it MUST be their system. I have over 1,000 games on Steam, over 50 on Origin, a few dozen on GoG, some on Desura, well, you get the picture. Quality products, used correctly and not abused (extreme overclocking can easily cause system instability, which is sometimes difficult to accept for some). This ram lightly overclocked has yet to give me any problems, but for the record, I run it stock speed 90% of the time, and currently it's stock speed, along with my Intel i7-3820 processor. So basically, in the three gaming systems I have at home right now, my two sons and mine, we have zero issues and all have this ram installed. Of course when I upgrade around Christmas I'll still use G.SKILL, but it will be their DDR4 memory, of which I have little doubt it will be of the same high quality found here.

Cons: I have a Cooler Master Hyper 212 plus installed on all home gaming systems (or variants of... the EVO on one system) and I know on my system the heatsink just barely clears the rather high heat spreader on the ram in the first DIMM slot. Just something to keep in mind, though I doubt it will be an issue for most boards out there, unless those ram slots are even closer than those on my MSI board as mentioned above.

Overall Review: Always check the manufacturer's website of your motherboard for updated bios and/or drivers if and when having any issues with your system. Generally, I'd recommend NOT updating firmware UNLESS you're having an issue, and that issue is specifically addressed, and even then only as a last resort. It's far too easy to brick a system (even with the 'dual bios switch'). Personally, I've never fried a board updating the bios, but have seen people who THOUGHT they did, as well as people who actually have. Neither is an exciting, fun experience!

Pros: Flawless in every aspect, using it 9 months now!!

Overall Review: Could have went cheep, but I never do

Pros: Great RAM from a trusted name. I have used G.Skill in many builds, and it has always performed to expectations. I have never had any compatibility issues, and I have used the Ripjaws on many different motherboards with varying chipsets. This kit was purchased for a customers new AMD based gaming build, and again, it delivered. Running at it's rated speed and timing on the system listed in "Other thoughts". No overclocking beyond specifications this time around.

Cons: None. Note that the heat spreaders on this kit do extend above the sticks and may interfere with some larger CPU coolers that overhang the DIMM slots on the motherboard. So make sure you do your research if this is a concern with your motherboard and CPU cooler. In this case, it was not.

Overall Review: Again, a shorter review than I normally do, but with RAM it really only comes down to one thing, is it working as intended and how you expected. This G.Skill Ripjaws 1600 DDR3 is doing just that. Basic System Specs: AMD FX-8350 Vishera GIGABYTE GA-990FXA-UD3 AM3+ AMD 990FX (This) G.Skill 8GB 1600 DDR3 Sapphire Radeon 7870 GHz Edition Win 7 Ultimate 64 I would easily recommend this RAM to anyone looking for a quality 8GB 1600 kit for any build.

Pros: Got this RAM to upgrade a friends computer and it was great windows 7 experience index rates it at 7.7 so it quite satisfactory, did not have to set it up in BIOS, it was properly recognized. I have always had great luck with Gskill RAM and highly recommend it to anyone upgrading or new build

Cons: none except that the price keeps going up

Cons: In the last six months I've had 2 of these sticks die. One in my home 1090T based machine, and the other in my work A6-3500 based PC. Total of 8 sticks owned / used, two have kicked the bucket. Haven't RMA'd yet, as ram is so cheap I just purchased two more to replace.

Overall Review: Dispite this, GSkill is still one of my favorite memory manufacturers. I understand that ram dies from time to time, it happens.

Manufacturer Response:
. Dear Customer Thank you for your G.Skill purchase and review. We are sorry to hear two modules are not working properly. Please send them in for RMA and a replacement should work better. This memory kit is above standard, so make sure to configure settings in BIOS. Without the proper settings, the memory can corrupt over time. This is one of our most popular kits as it is fast and reliable. The G.Skill RMA process is quick and hassle free, so you should receive new modules shortly. Visit the Official G.Skill website for complete RMA procedure. For any further questions or concerns, feel free to contact us directly. Thank you GSKILL SUPPORT Quality and customer service are our top priorities. Tech Support Email: ustech@gskillusa.com RMA Dept Email: rma@gskillusa.com G.Skill Forum: http://www.gskill.us/forum/

Pros: Worked perfect on first boot with no problems. been running nonstop with no errors. good price