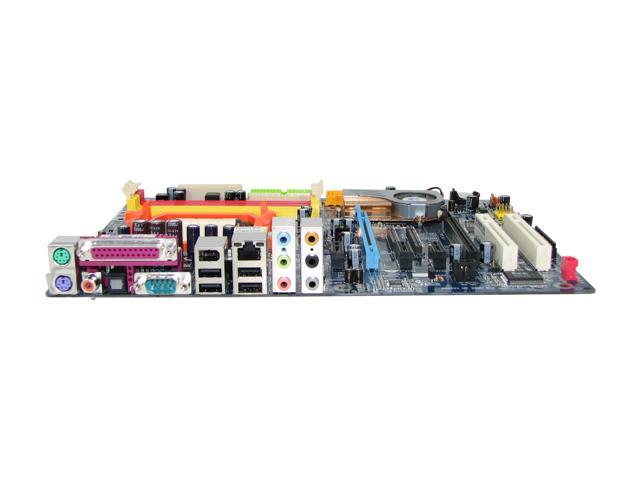 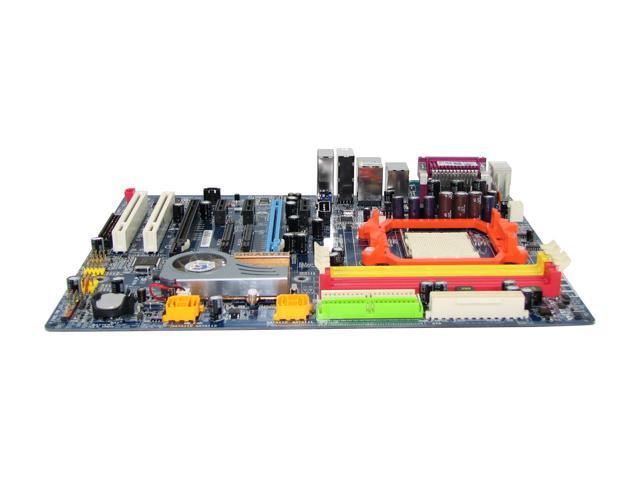 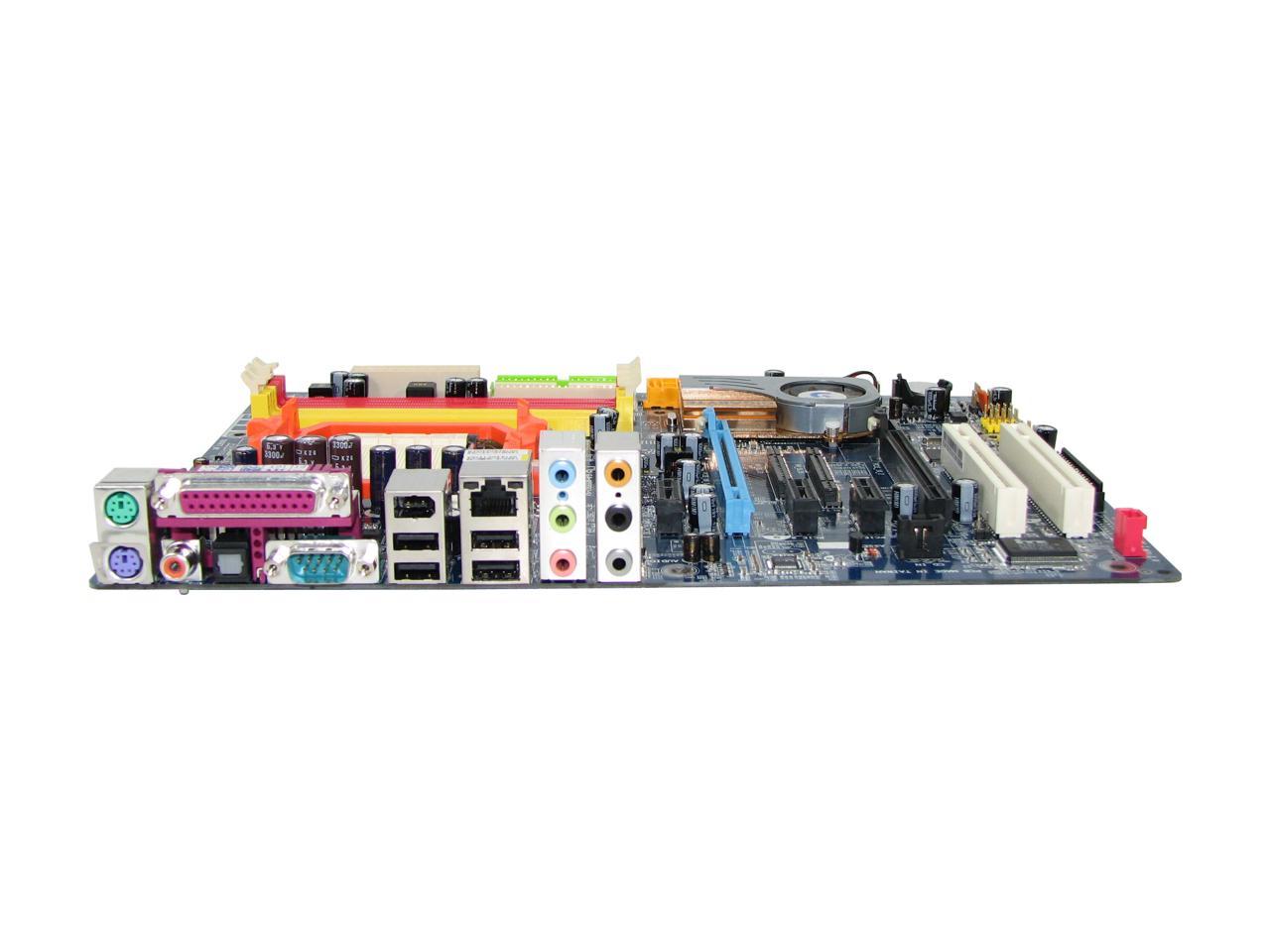 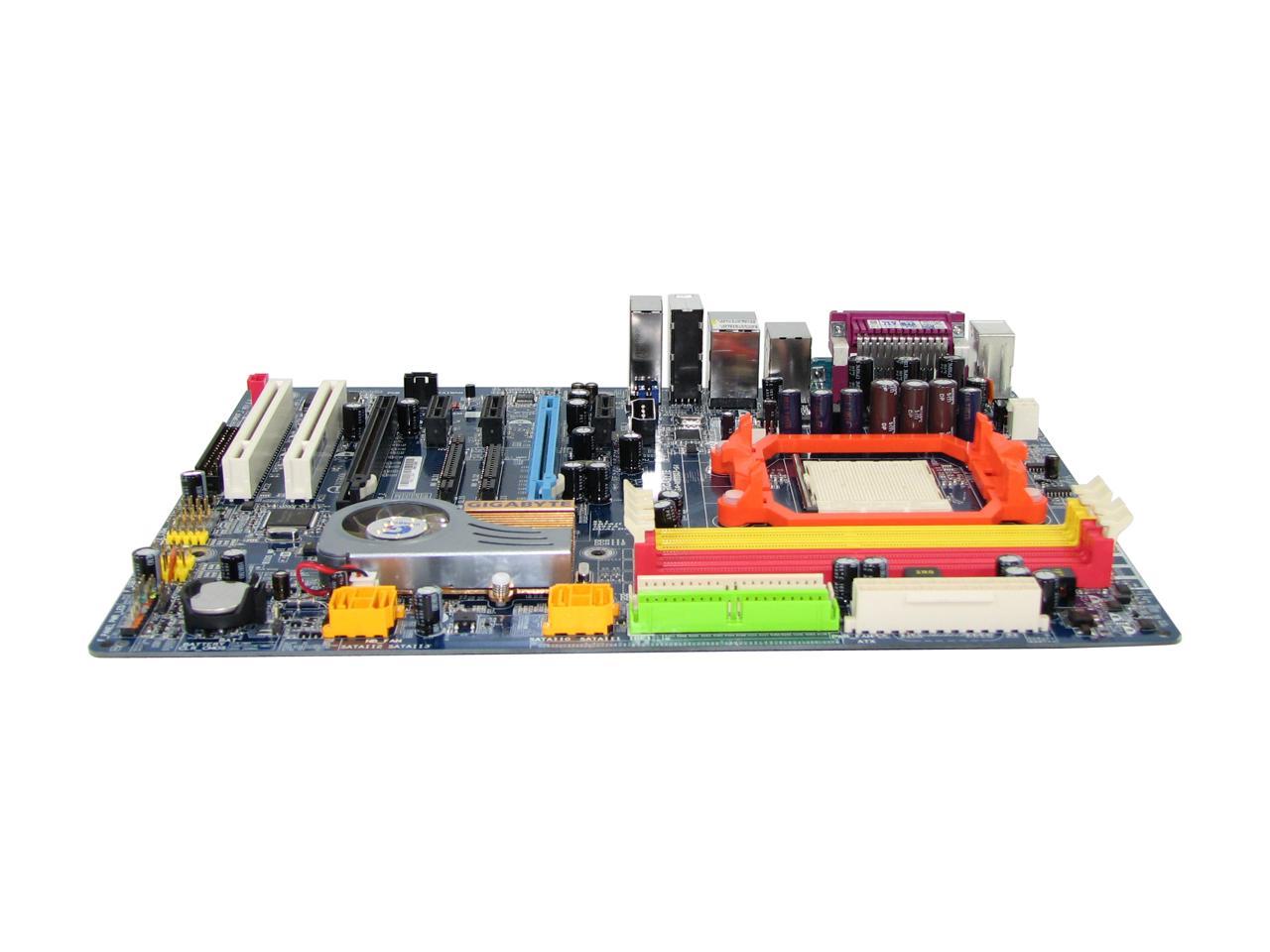 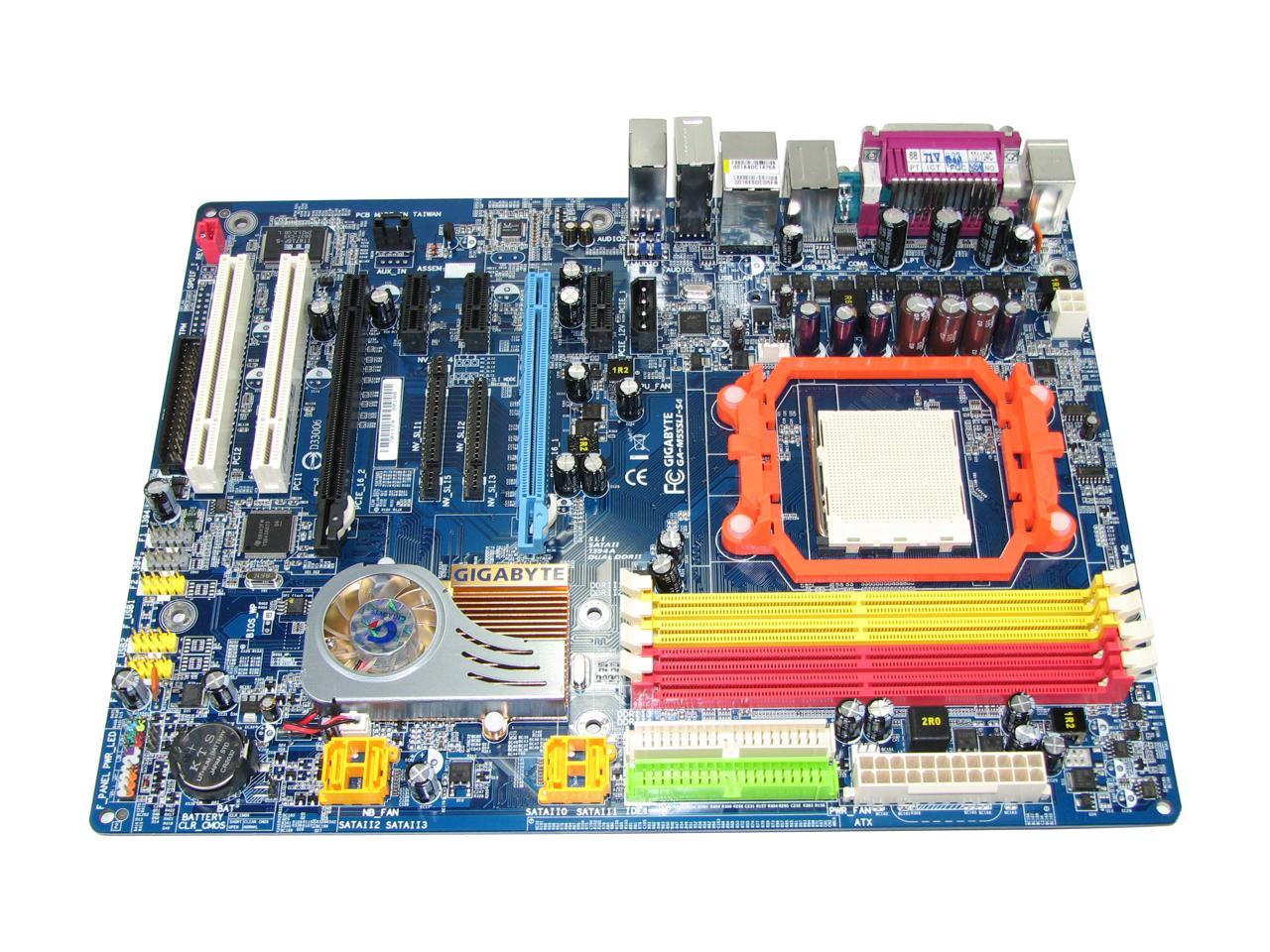 (316) Write a Review
OUT OF STOCK.
Overview
Specs
Reviews
The Gigabyte GA-M55SLI-S4 is a full featured SLI motherboard at an affordable price. You get support for processors using AMD’s Socket AM2: Athlon 64 X2, Athlon 64 FX, and Athlon 64. Four DIMM slots support up to 16GB of memory in 64 operating systems. You get plenty of expandability with 2 PCI-E x16, 3 PCI-E x1 and 2 PCI slots. Also included on board are up to 10 USB 2.0 ports, 3 FireWire ports, 8 channel audio and gigabit LAN.
This is a great, full-featured, value-driven motherboard for anyone looking for a basic build.

Learn more about the GIGABYTE GA-M55SLI-S4

Pros: This motherboard is simply amazing especially for those people who are trying to buy a budget PC - what? come on 97 USD is pretty good for a motherboard especially when it has all of these crazy features as stated in the manual and on the manufacturer's website. Pair this with a AM2 Athlon 64 3200+ and an Nvidia 7800 GT or one of the newer versions and you just might find yourself with a medium gamer PC - you'll have a match made in heaven. Both the CPU and the Bridges on the motherboard run extremely cooled that I could not believe my eyes. To get an idea it was idleling at 25C and maxing at 35C? What's up with that?

Cons: The CD-In Jack on the motherboard is located in a weird position on the motherboard. Unless you have a long enought cable to get to it you may find yourself in a tight squeeze. But if you ask me it didn't bother me at all.

Overall Review: Wished they had put ATA round cables and not the old kind. Round cables increase airflow in the system.

Pros: Beautifuly Laid Out Board, Nothing Is Cramped, Everything Is Reachable, Packed with Awesome features, Easy to Read VERY Informative Users Manual, Everything Was Good to go right Out of the Box (Only Things Adjusted Were the Date/Time, Boot Order, CPU Warning Temp) This Board is Being Installed In a Budget, Novice PC User Family W/ An AM264 3500, X2 DDR2800 512 Corsair Strips, 7300GT Gigabyte VGA, Inside A SLK3000 Antec Case W/ 500W PSU.

Cons: 24 PIN PSU'S WILL NOT WORK WITH THIS BOARD. YOU MUST USE A 20 PIN PSU AND THE 4 PIN AUX POWER CONNECTOR (TOP LEFT ON THE BOARD). IF YOU CONNECT BOTH A 24 PIN & THE AUX PWR, THE BOARD WILL NOT POWER ON. LEAVE THE AUX PLUGGED IN AND (IF YOU HAPPEN TO HAVE AN ANTEC PSU) SWING THE LAST 4 PINS OUT OF THE WAY AND RE-INSERT. No Round ATA Cables, No Accessory Brackets Are Included, There Is No Jumper Present to Use to Reset the BIOS, But That's It... As Of Right Now (XP Installation) I Have No Other Cons to Report.

Overall Review: http://www.gigabyte.com.tw/Support/Motherboard/Driver_Model.aspx?ProductID=2310 If you Copy this Link Into your Browser, It Will Take You Right to the Support Page For this Board. You Will Need The XP SATA RAID Driver & A Blank Floppy Disk For a Clean Install. After you Download from this Site, Double click the File And Point The RAR Extractor To your Blank Floppy. This Is an Awesome Board for the Price, So Far I Am REALLY Glad that I Picked This One For this Build. As I Said @ the Top, This Will Be 1 Of 3 Reviews As I Get Things Built, Installed And Tested...

Pros: The board itself is a pro. The price is just right and it accepted all of my hardware first boot.

Pros: High memory capacity to use 64-bit OS and more than 4GB, cool colors to see thru transparent side panels.

Cons: A bit of a challenge getting Windows Vista installed. (I didn't try XP.) It went like this: I first flashed the BIOS with the latest, and started to load Vista. I kept getting stop errors and BSOD (Blue Screen of Death) over & over again. I had 4GB RAM installed (4x1GB Crucial DDR2 PC5300) and thru process of elimination ended up removing all but 1GB. Only then did Vista install. After loading all the drivers, (NOT the ones on the CD; they're not for Vista) and installing all the Microsoft updates, I was able to put MOST of my memory back (3GB). All my RAM tested good in a different PC, so don't know what the problem with memory management is!

Overall Review: Might be fine for Windows XP, but you better have patientce and a good deal of computer know-how to get Vista going.

Pros: I did a review on this board a few days ago, and here is an update. (If anyone cares that is...:o) I went and googled the heck out of this board trying to fix my problems with the ati 9250 video card I was trying to stick in it. Turns out this board is not very friendly to ATI cards--probably shouldn't be surprised since it has an NVIDIA chipset. I found a lot of pseudo-voodoo solutions and tried them all, despite my better judgement. Nothing helped. Bottom line, I went to the store and dropped $300 on an EVGA 8800GTS. HOLLY COW! I'm amazed at the performance I'm getting, not just speed wise but with temperature, multitasking--playing a game while d/l-ing at 600KBPS with Azureus--and system stability is great. There are no random crashes, artifacting, blank windows of death, etc... I guess this puppy just needs good parts to work with. I know not everyone can afford a card like this, but a decent Nvidia card should fix many of the problems people are reporting here.

Cons: How am I going to pay my bills?!? ....worth it though :o) Also, as people have stated, a fan blows hot air right on to the video card in PCIE x16, slot 1. Now that's just silly design!!! Thankfully, my specific build is still nice and cool.

Pros: Great features and ability to upgrade on this board for the money spent for it. Less issues of finding room for all my toys on this board compared to others in the past.

Cons: I run dual Raid PCI boards and the only 2 PCI slots being right next to each other kinda is rough on the IDE cabes. I could think that there might be other cards with clearance issues too. But with all the PCI-e ports there is not much room for them to cram anything else in there, tho would have been nice if they alternated PCI/PCI-e/PCI instead of PCI/PCI/PCI-e. Slight hang on post just before IDE detection once in my initial install but no issues since. Also the USB addons for front panel or additional slots mounted USB are not included, tho the ports are on the MB for them. But plenty of integrated USB on back plane(not a real big deal but figured there might be someone that may want to know this.)

Overall Review: Perfect board for someone looking for upgradability low cost and room to expand. This is my first MB with PCI-e and think it was a great upgrade, makes my old P4 HT look like a i386.

Pros: Stable, good layout, features, fast, but not as fast as Biostar. Hopefully durable that's one of the reasons I buy Gigabyte - long lasting performer. Online BIOS updates are a plus, but only Taiwan server has latest versions, watch out. My older Gigabyte machine is still alive after 10+ years, Asus, others burned in 3 years. I am not a gamer, a math designer, I handle huge data files with lots of visuals and real time updates and AMD/Gigabyte combination seems do best for what I need. This stuff flyes in comparison with Intel. I dumped Intel a year ago.

Cons: Bios tweaks are very limited. I wasn't able to fully configure RAM to manufacturer's specs 4-4-4-12-22. Bios allows to configure it from 5-5-5-18-23 to 4-5-5-18-23 and that's it. I have to use RightMark Memory Analyser software to tweak memory to manufacturer specs. If you can't get this with the existing BIOS, forget overclocking with this board, at least at pro level.

Overall Review: BIOS is bad for manual tweaking - options are very few. Easy Tune 5 - a windows tweaker is nearly useless as well, besides tempretures and voltages - useless. It even doesn't save settings, you have to set it every windows session and does only as much as BIOS. I care less about overclocking, I just want to set components to manufacturer specs. May be slightly overvoltage memory +0.5-1V. The word is it performs much better at slight overvoltage without any danger of burn or reducing a lifespan. I am definetely not into extreme overclocking, just need few basic tweaks and this board's BIOS doesn't do even that, althogh board itself supports it.

Pros: Excellent budget board for those looking to be able to keep up with PCI-E x16 video card technology. 4 Sata connectors!

Cons: Default drivers on Vista, so no 'Cool n' Quiet' driver for the CPU or EasyTune 5 to monitor system temp/perform minor tweaks.

Overall Review: I dislike the trend in getting fewer and fewer PCI slots on motherboards these days. Be sure to visit the manufacturer for a Bios update.