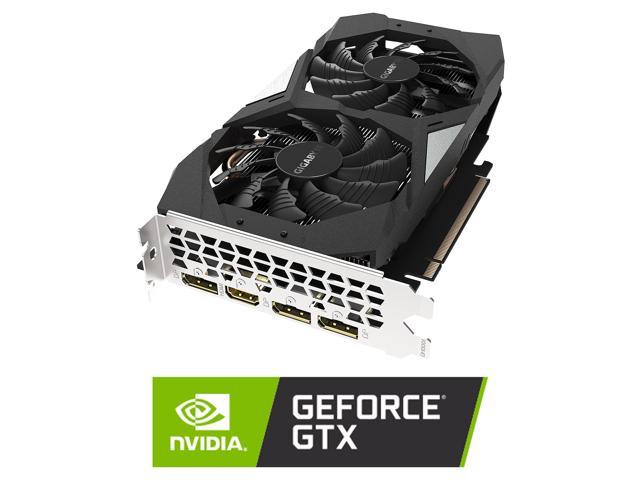 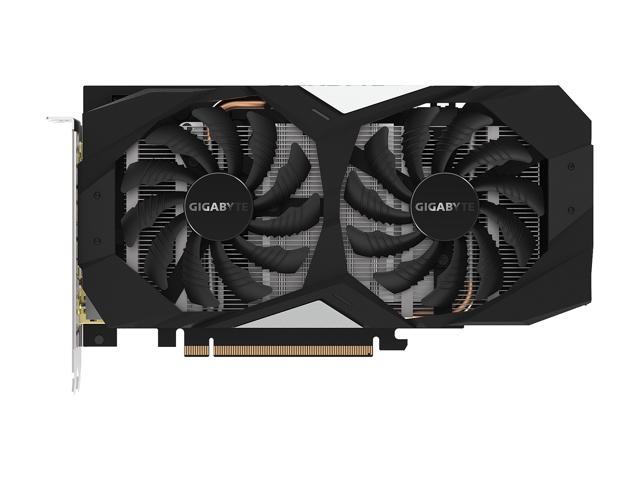 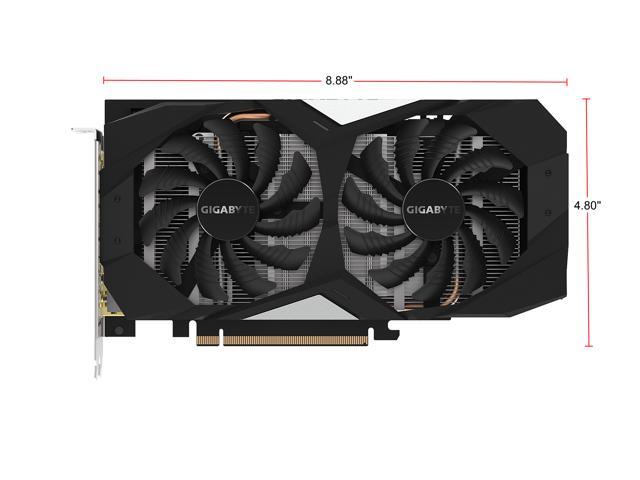 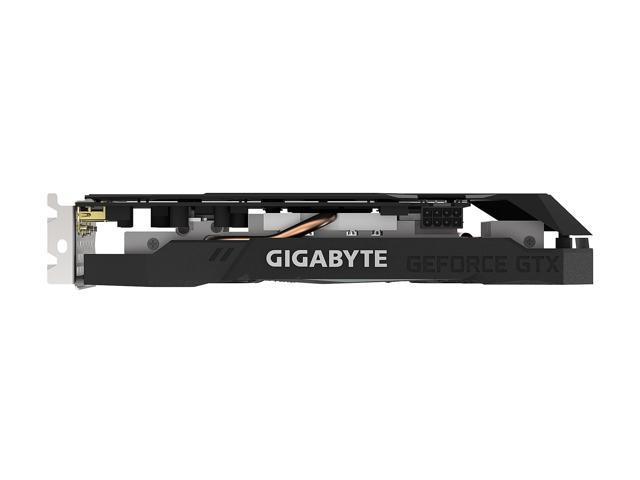 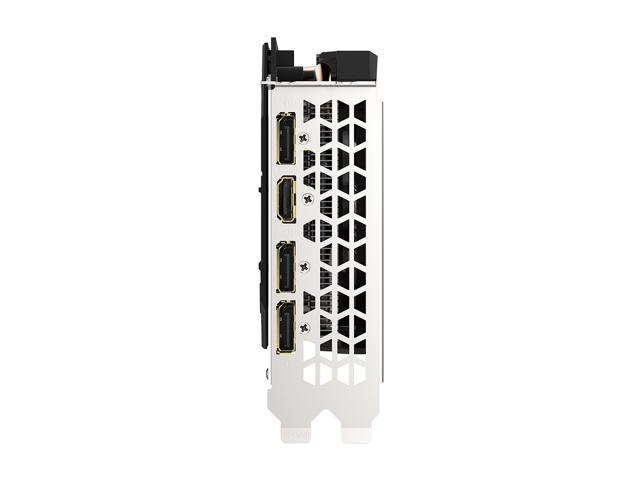 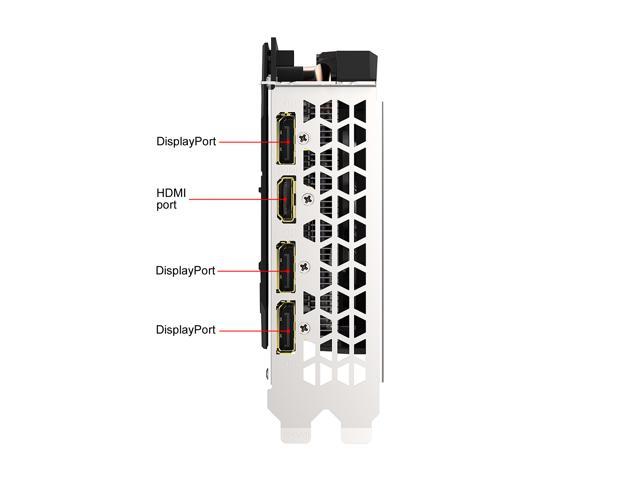 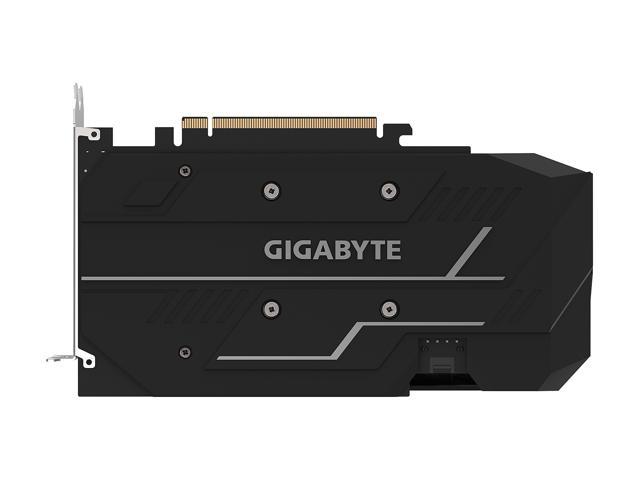 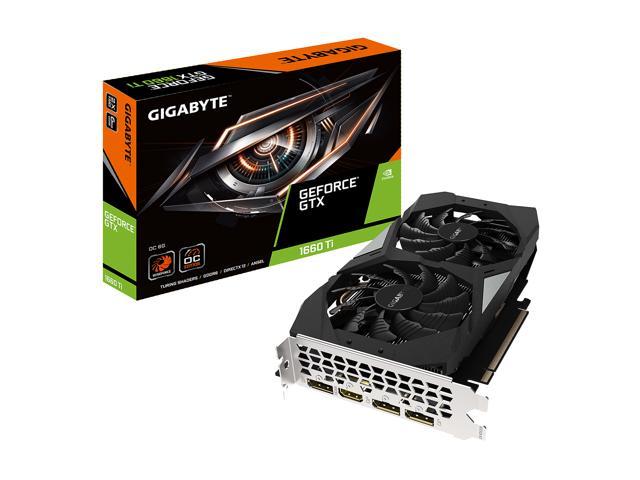 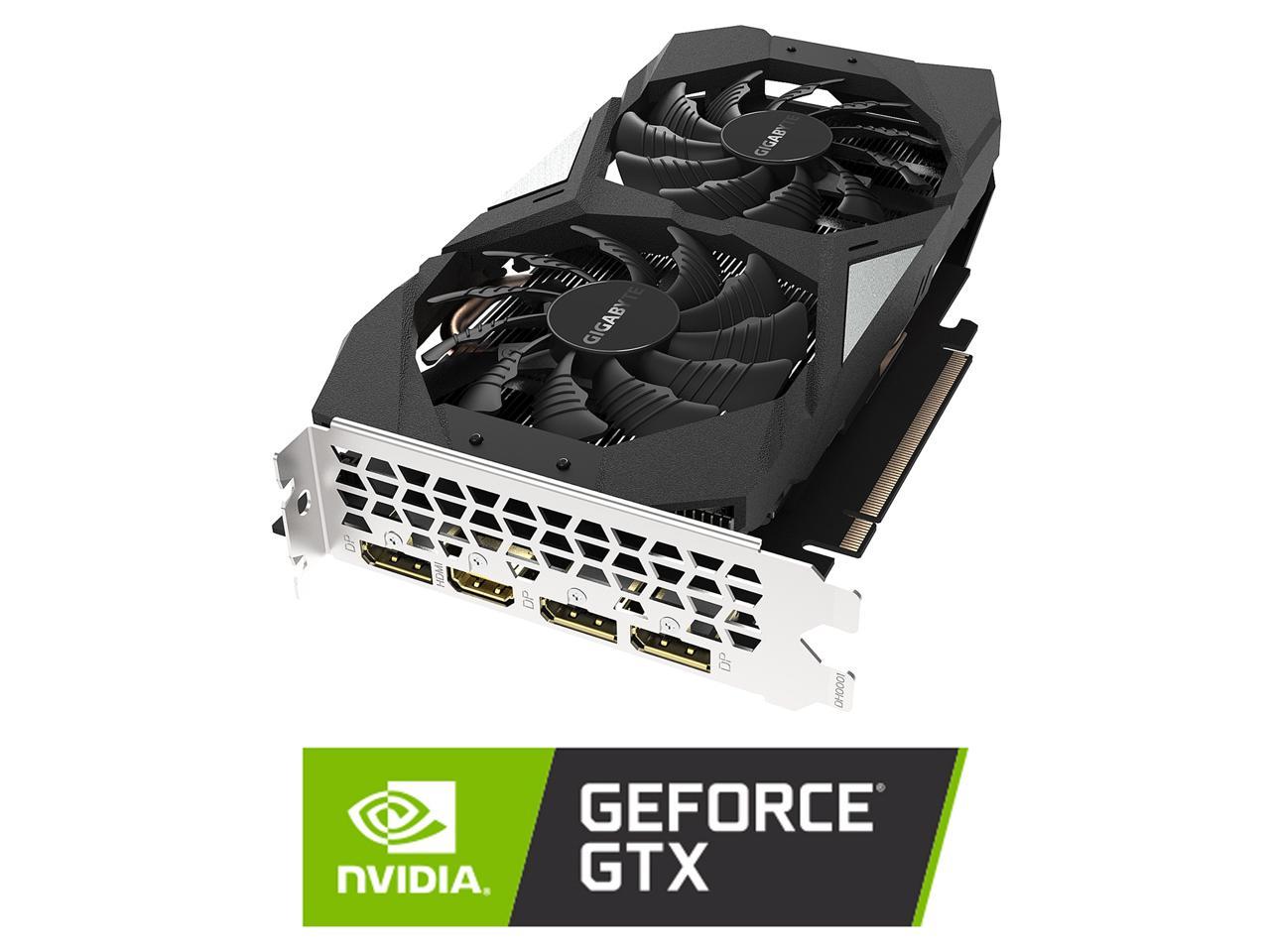 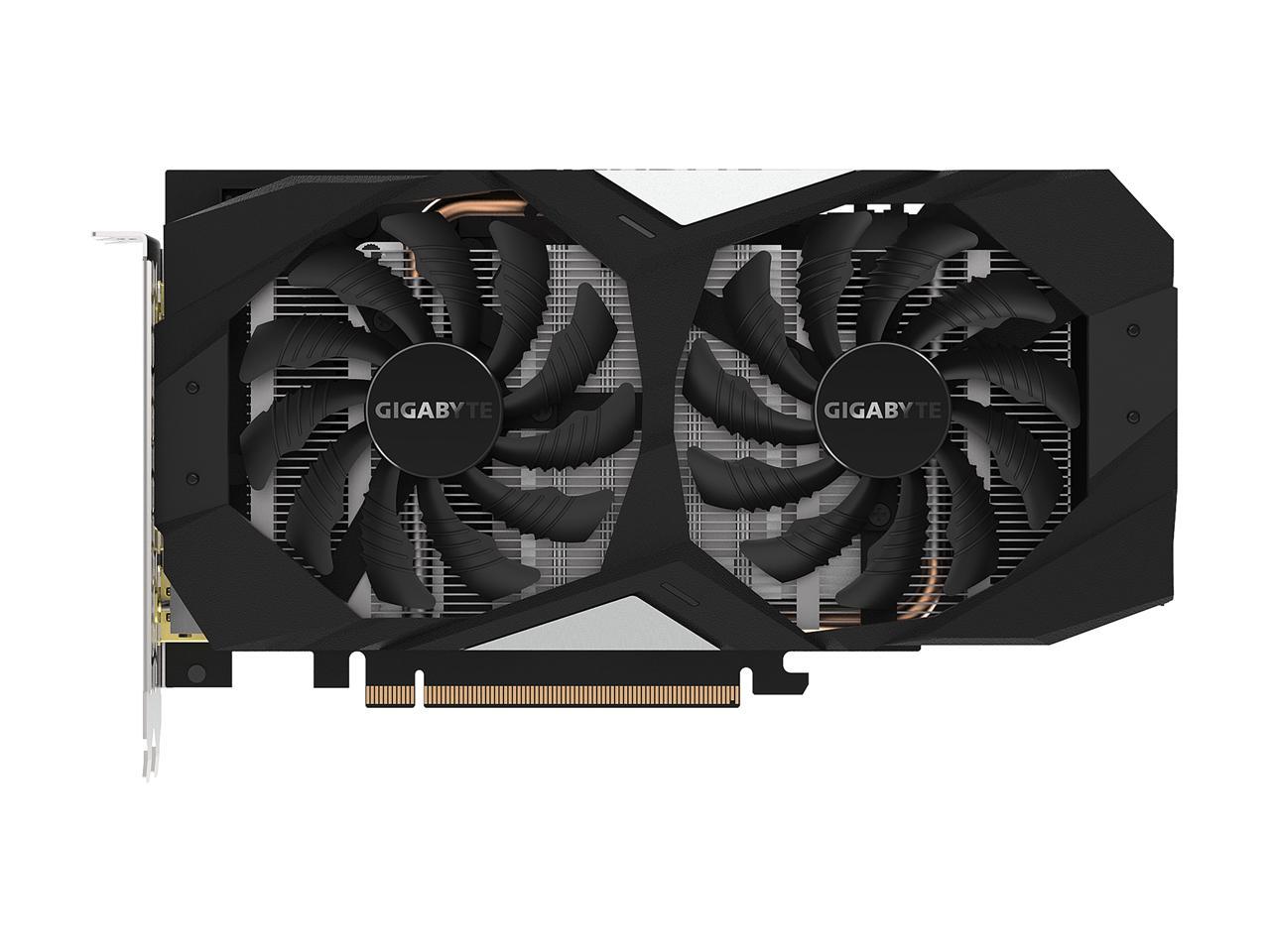 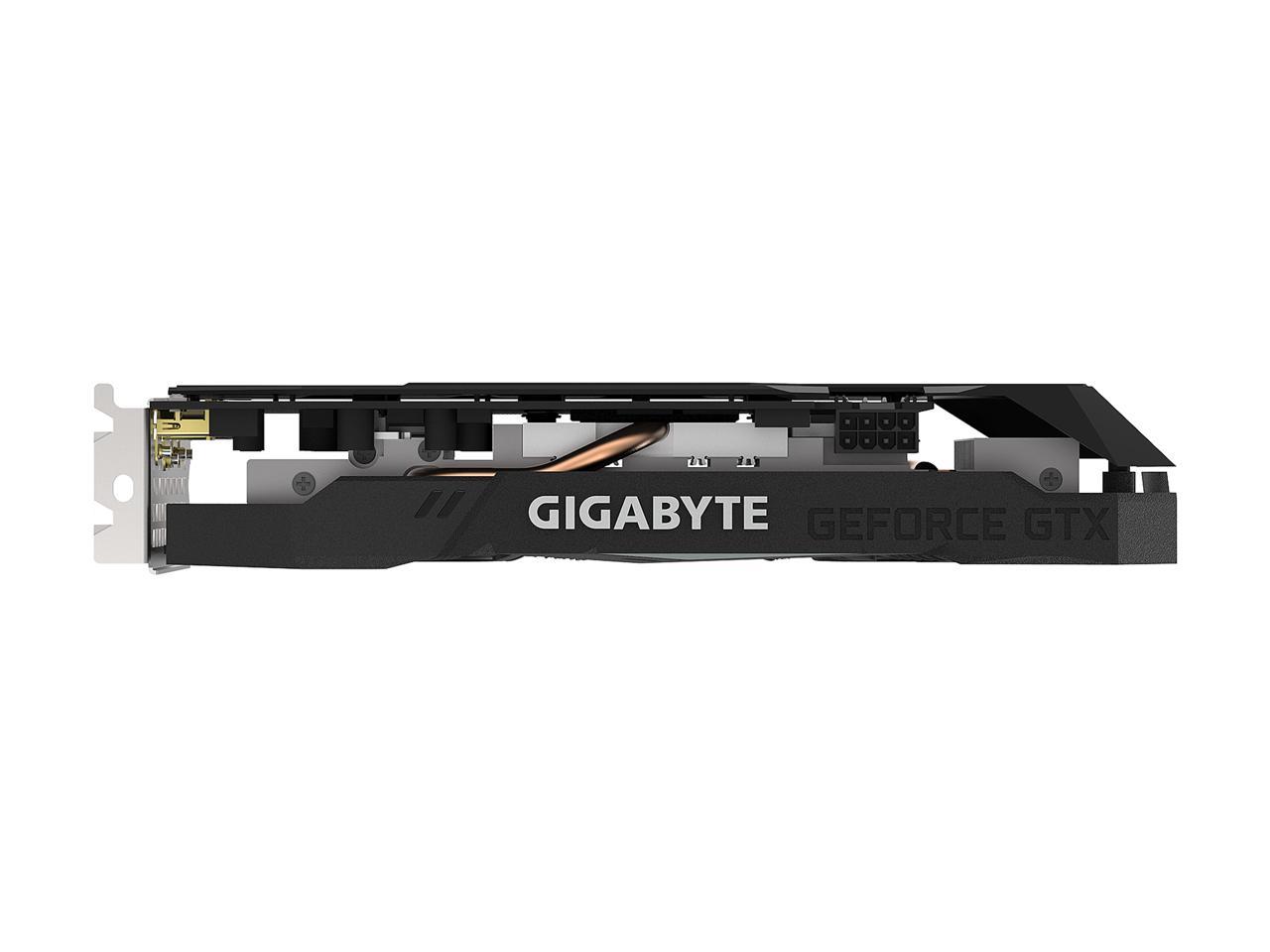 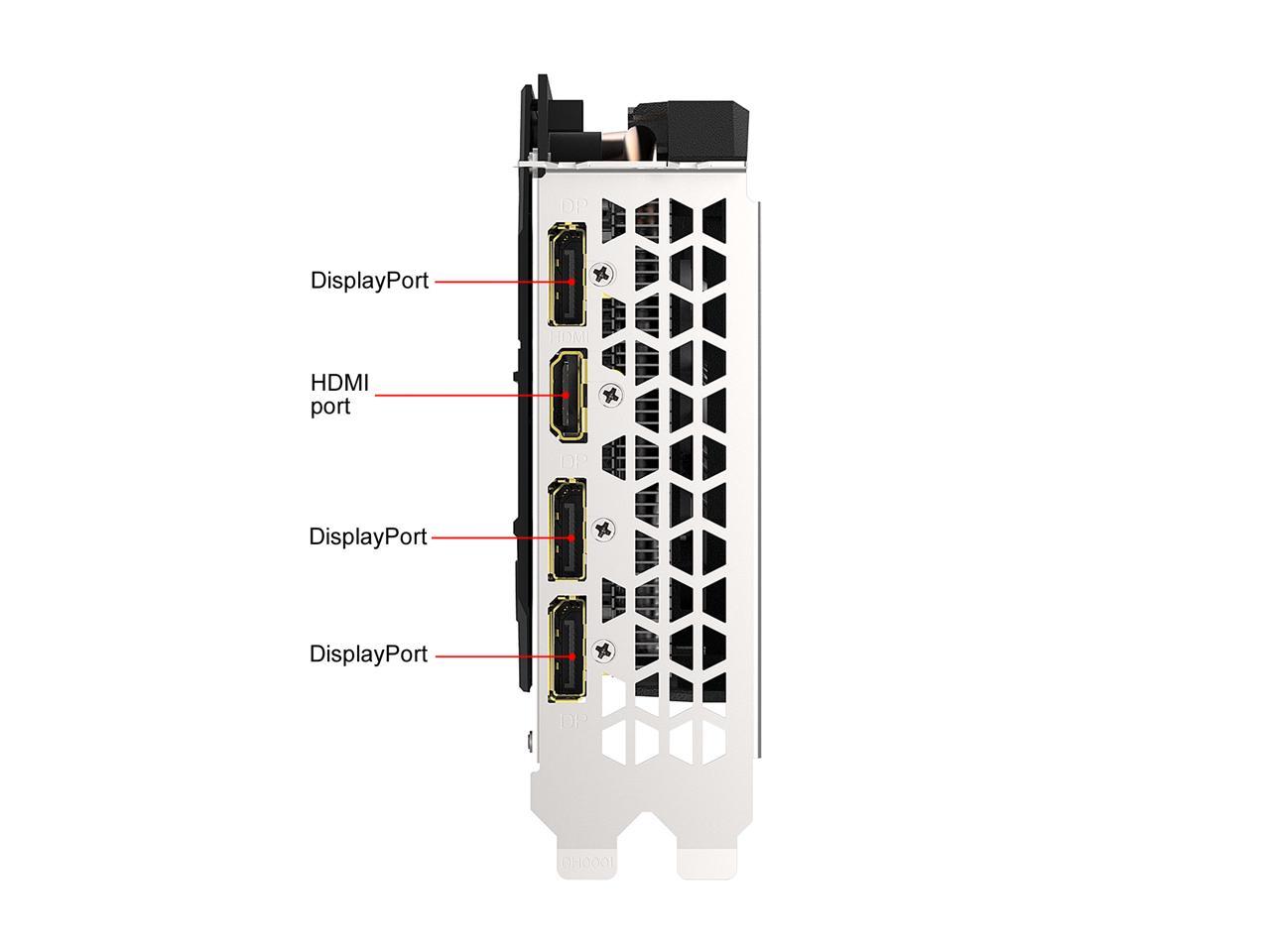 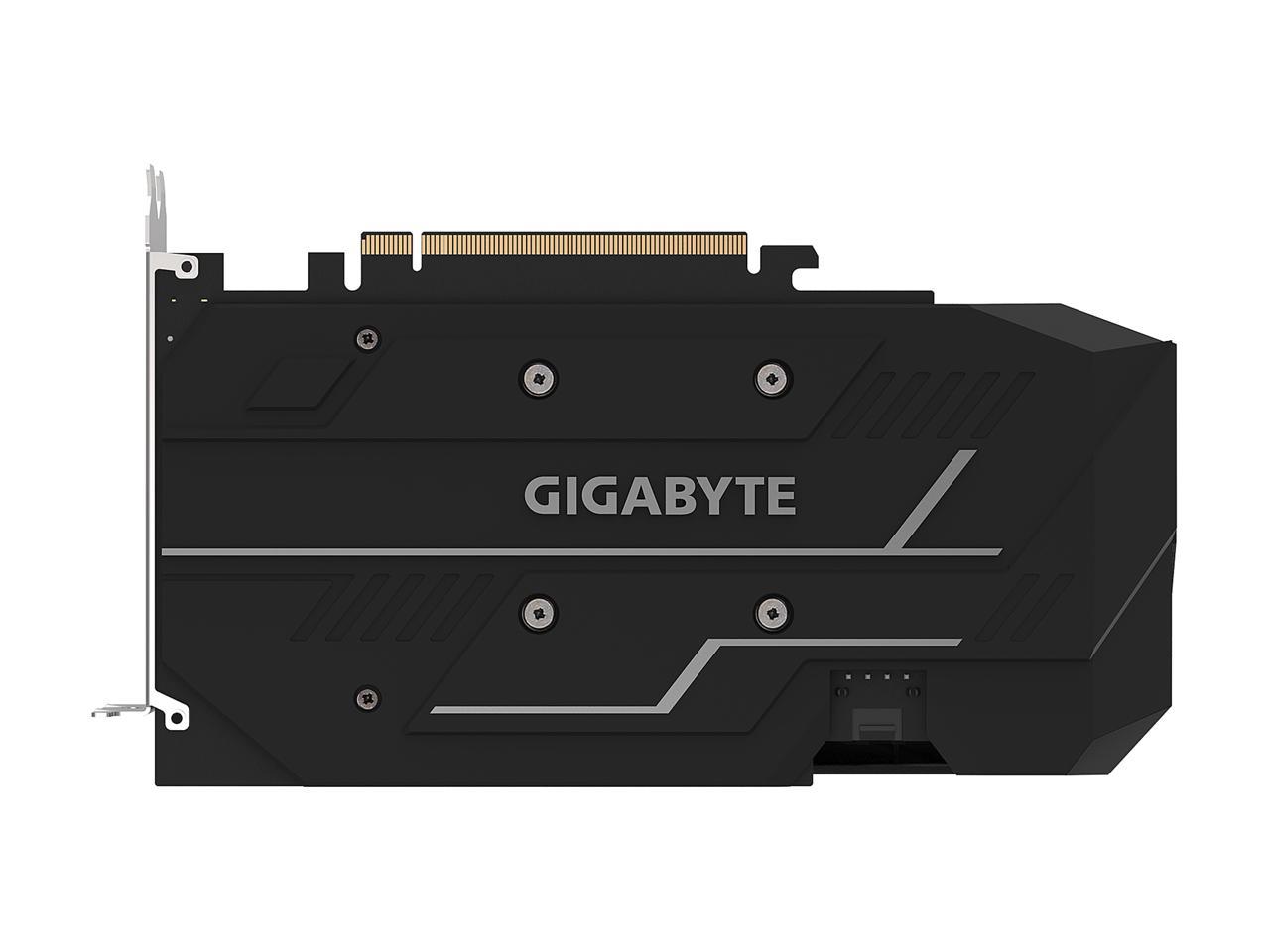 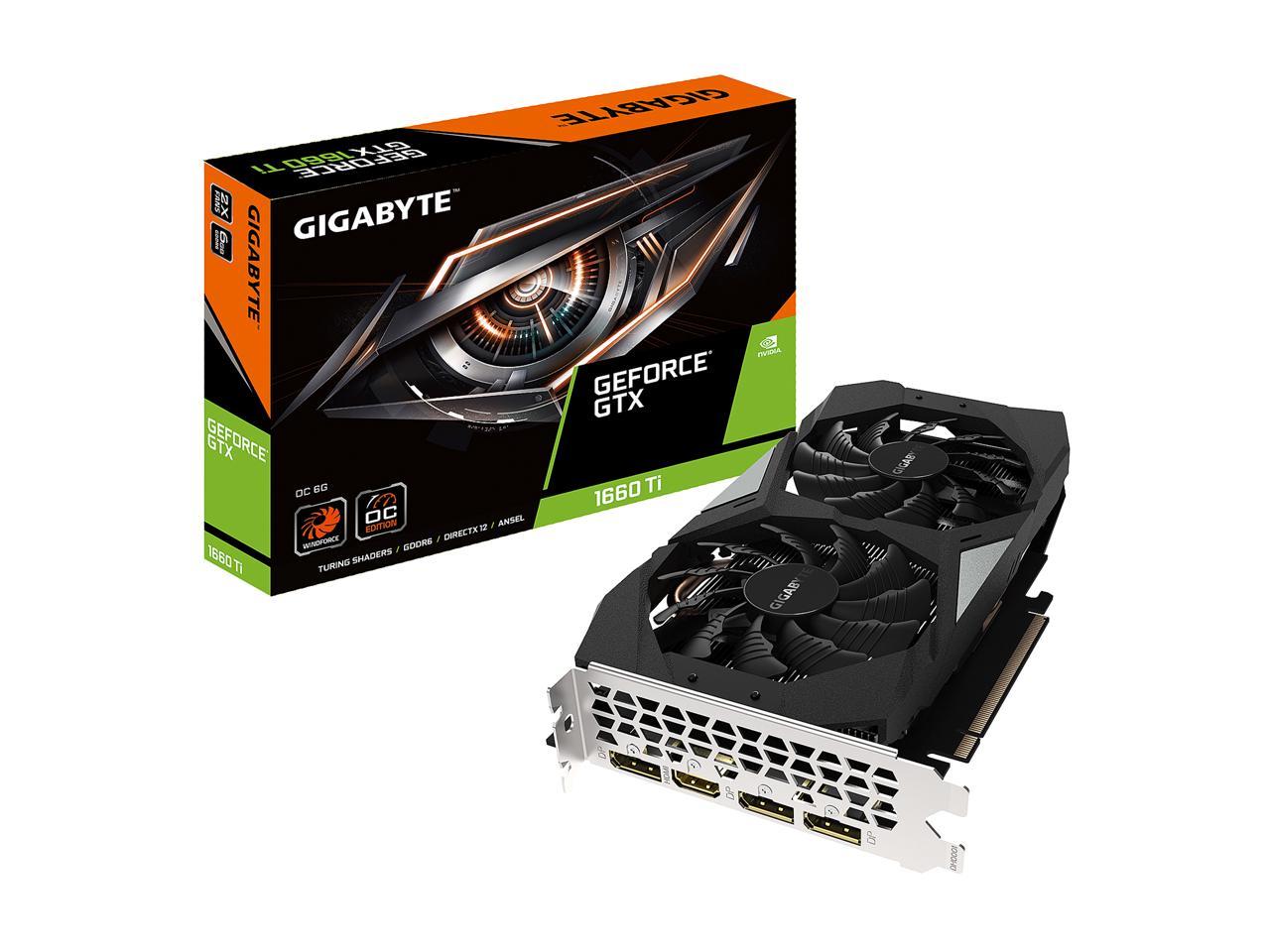 The shape of the pure-copper heat pipes maximizes the direct contact area with the GPU, enhancing heat transfer. The heat pipes also cover the VRAM through a large metal-plate contact to ensure proper cooling. Learn more about the GIGABYTE GV-N166TOC-6GD

Overall Review: I was an idiot and spilled coke on my new pc, killing the mobo and GPU (RX 590), when ordering replacements I got the same mobo but decided to try the 1660 after reading naught but positive reviews. I am blown away by the difference. The performance is only a little better and not really noticeable in-game aside from the performance stats. After all, the 590 is fairly beefy. What is different is the heat, volume, and power consumption. Where the 590 sounded like a jet engine spinning up, (even after customizing the fan curve) the 1660 is whisper quiet. I can't even hear it under load when I have headphones on. My 590 was hitting and maintaining temps of 84C under load while Nvidia's offering peaked at 72C but more often than not hovered around 65C in game. I failed to record power draw, but all of the specs and reviews indicate the GTX 1660 is significantly more efficient in this regard. To be clear I was perfectly happy with my 590. Every game ran beautifully and it crushed Blender as well as Adobe Premier. But now I can do the same thing without having to crank up my music or my AC to offset the noise and heat. I am aware my design stuff will likely suffer in speed with 2GB less VRAM, but that is a tradeoff I am willing to make. 10/10 would buy again.

Cons: In my opinion the 8pin power pci-e is in a weird spot, but it looks fine with my cable linking up from the bottom and it kinda helps with GPU sag. The closer to the bracket the better I guess.

Overall Review: If your upgrading from a 970/1050ti/rx570 or equivalent I would definitely recommend paying the money for this card. If you already have a 1060 6gb/rx 580 and you are on a budget maybe wait a bit. Or buy this and sell your old card to make up the cost.

Cons: -During game play when fans spin up I get a buzzing/rattling. (I know it is fan related because I can touch the fan shroud and it stops). This is very annoying given the silent nature of the rest of my rig.

Overall Review: If it weren't for the fan buzz this would be a 5 Egg card. I will toy around with it a little to see if I can get it to stop with some adjustments, but disappointing that I have to do that with a brand new card.

Pros: So far, so good. The cooling design seems quite decent. Price for performance is great.

Cons: I don't see the point of a driver CD that absolutely has to download the driver from the internet. Why even spend the time to make that?

Pros: On a 1080 monitor with gsync, it runs everything well, even with an i3-8100 CPU. Built this system for cheap for my grandson, he also uses an Oculus Rift S. He has no complaints and says that it outperforms all of his friends systems. Price/performance ratio is spot on, I highly recommend this card. I think you'd have to step up to a 2070 to notice much improvement over this card. Performs well. Reasonably quiet. Not flashy, blinky LED on it. (some might think this a con, not me)

Cons: No ray tracing? Really, I can't think of any cons for this card. Some might consider the fact it has no RGB lighting a con.

Overall Review: I would recommend this card to anyone asking. I would buy this again (in fact I'm strongly considering it right now). No problems with drivers, power consumption, fan noise or thermals. It just works, and works well.

Pros: - Great gaming performance even at my 3440 x 1440 resolution (ultra wide 2k) - Doesn't run too hot and wattage draw is low for performance - Very quiet even under load - Ray-tracing with a driver update down the road (in DirectX 12) - Equivalent performance to a GTX 1070 - Was only $270.00 - CAN run games at 4k albeit with graphic settings turned down to medium-ish - Driver stability

Cons: - No native real time ray-tracing but that was expected and researched ahead of time - No older monitor ports

Overall Review: I upgraded to this from a broken Radeon RX 480 4GB and the jump is noticeable (most benchmarking websites show a 10 - 20FPS increase in nearly every game). I didn't want to spend a boatload of money to game at good FPS on my ultra wide 1440p monitor so I went with this as a good middle ground/mid-high range GPU.

Cons: If I had to choose something... it has very basic packaging. It's a box with a video card in it, nothing else.

Overall Review: I questioned whether or not this would work in an old Q6600-based system with PCIe 2.0. I thought there was an issue at first when there was no video output, however I found that in the older system, video output only came from the DP at the top of the card (furthest from the card slot). After drivers were installed, all ports worked in windows, but during boot still only one port. Because of this I decided to use a DP-to-DVI adapter on that port for my display (instead of HDMI). Overall, I'm quite happy with it's performance even in the older system - what a substantial improvement over an old ATI HD 4870 X2.

Pros: - Great value for FPS, I was surprised how this goes up against a GTX 1070. - Keeps really cool, never goes above 60C under load. - Overclocks with ease.

Overall Review: Upgraded from an AMD R9 380 so this was a great upgrade for the price - especially considering that card was more expensive at the time. Pairs well with my Ryzen 7 1700 3.6 OC