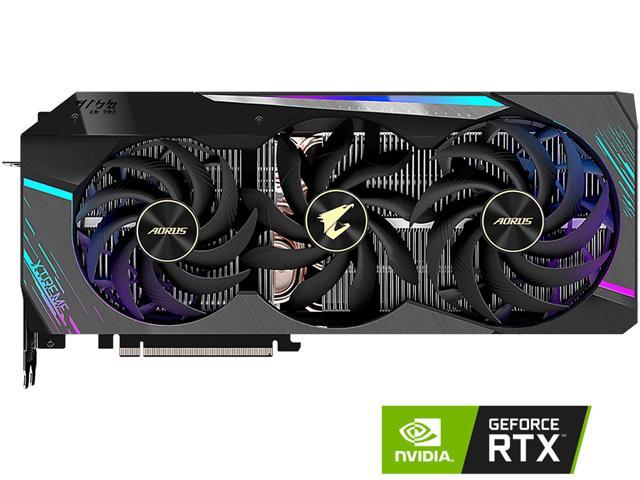 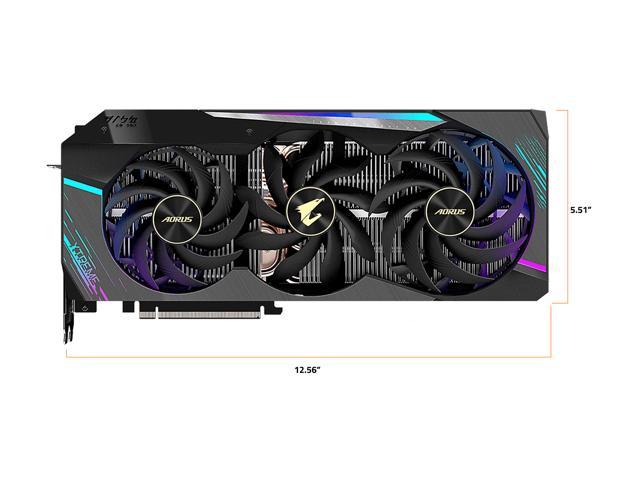 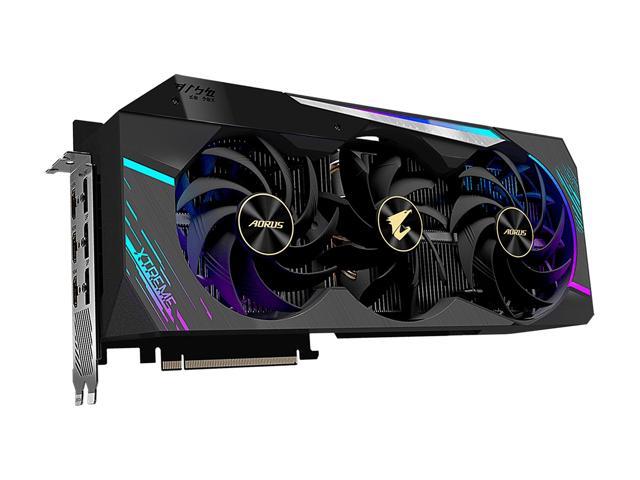 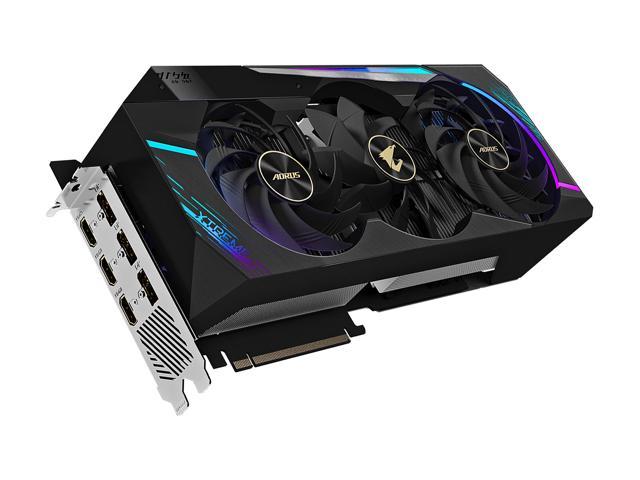 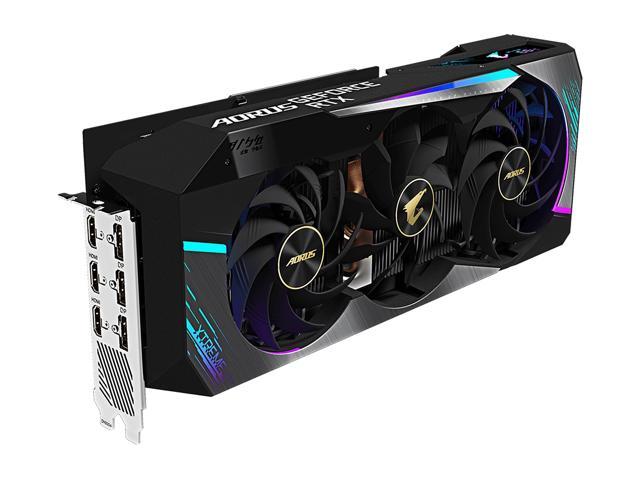 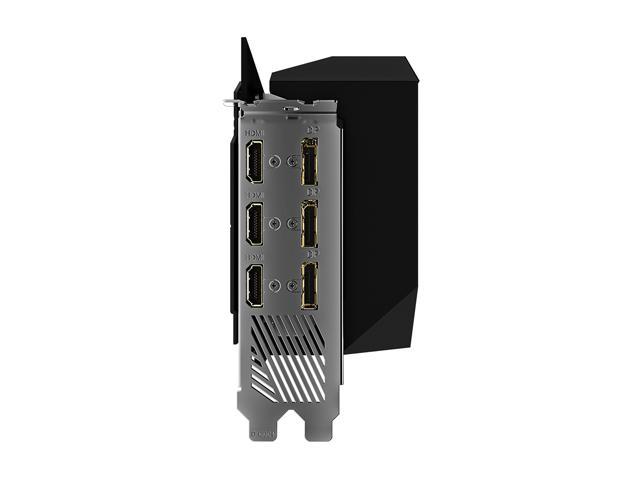 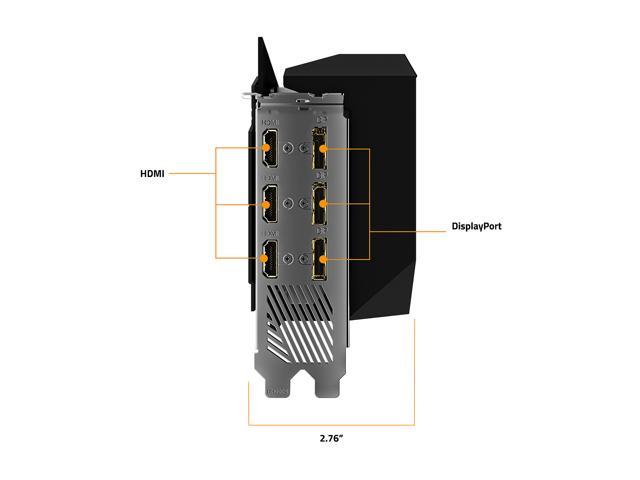 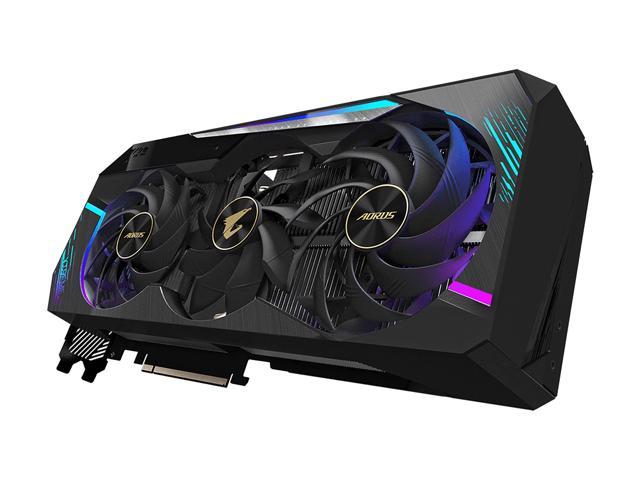 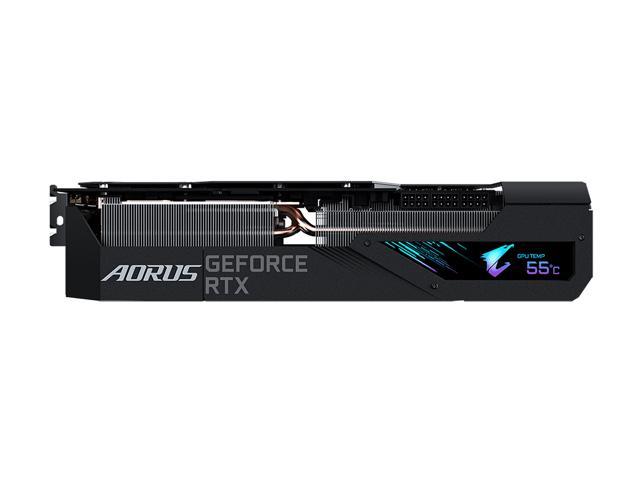 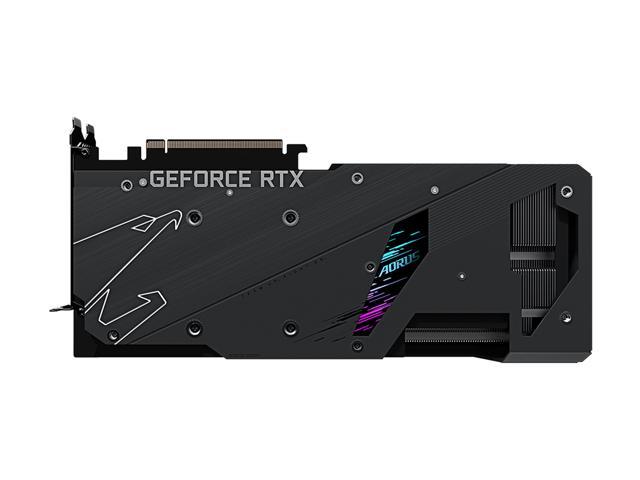 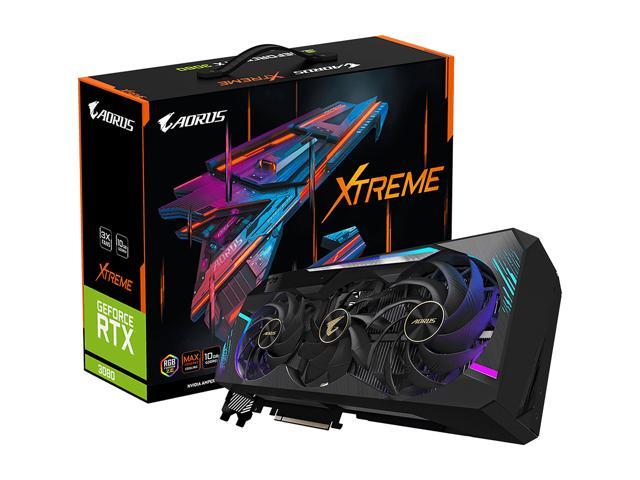 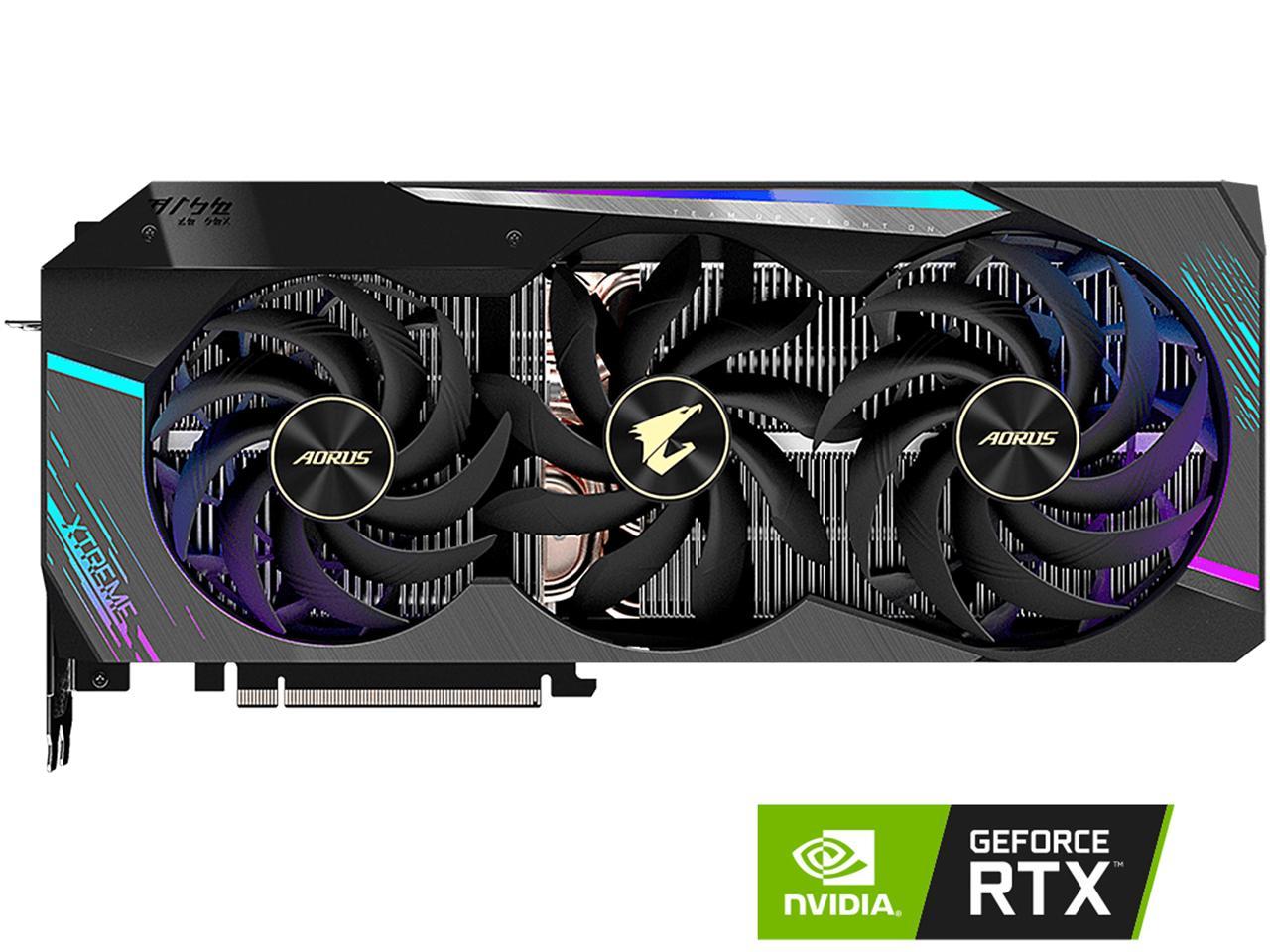 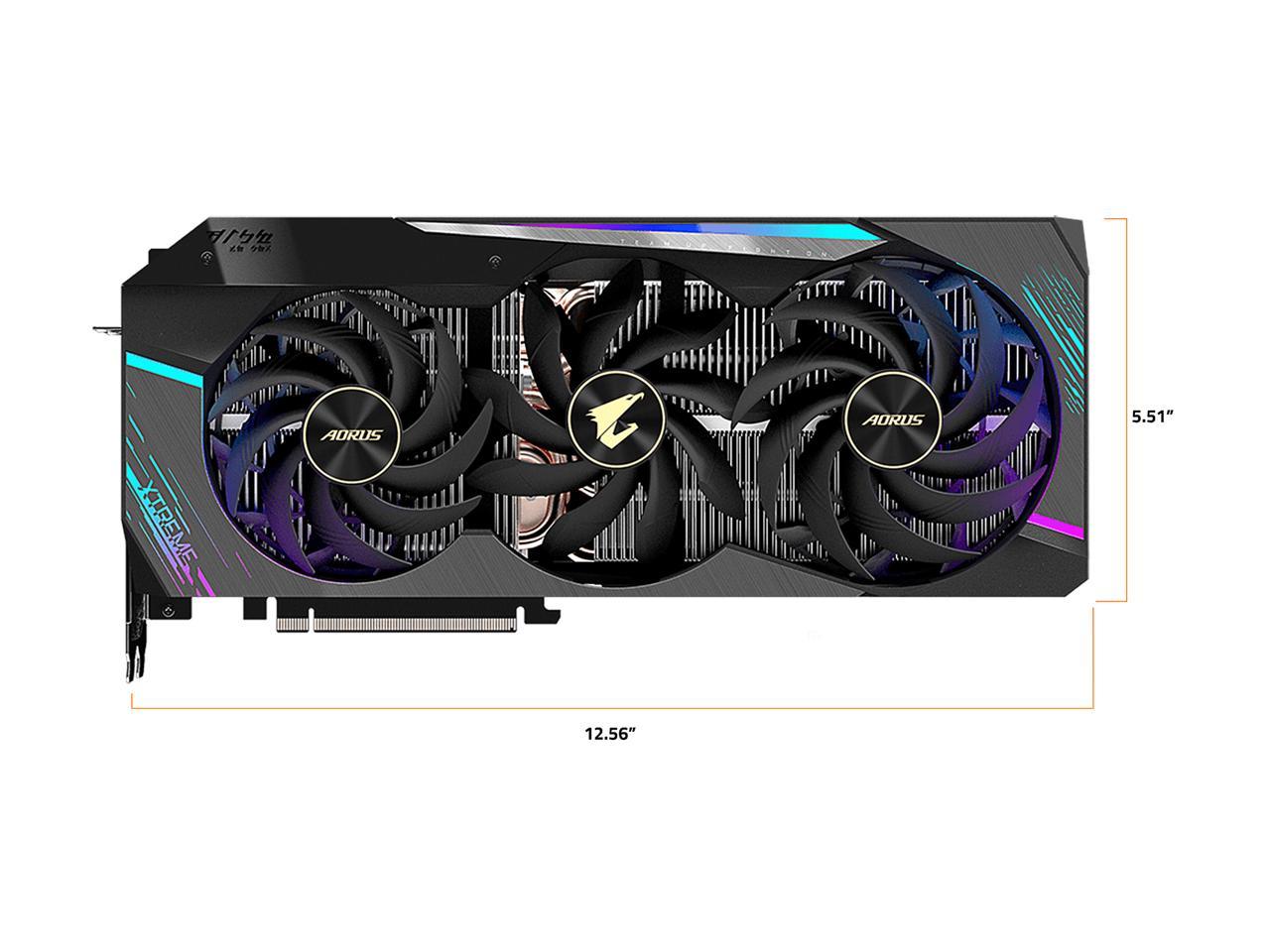 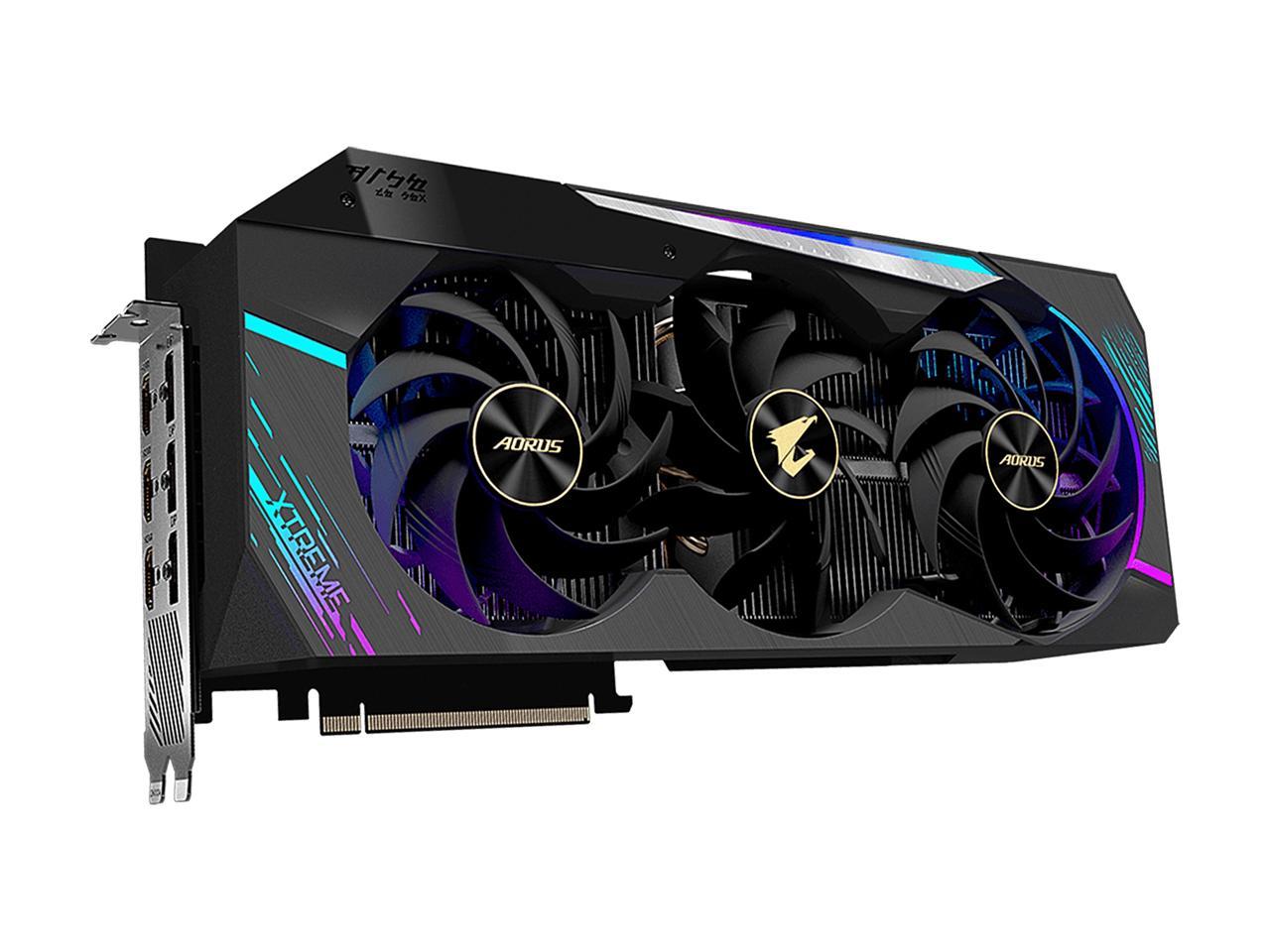 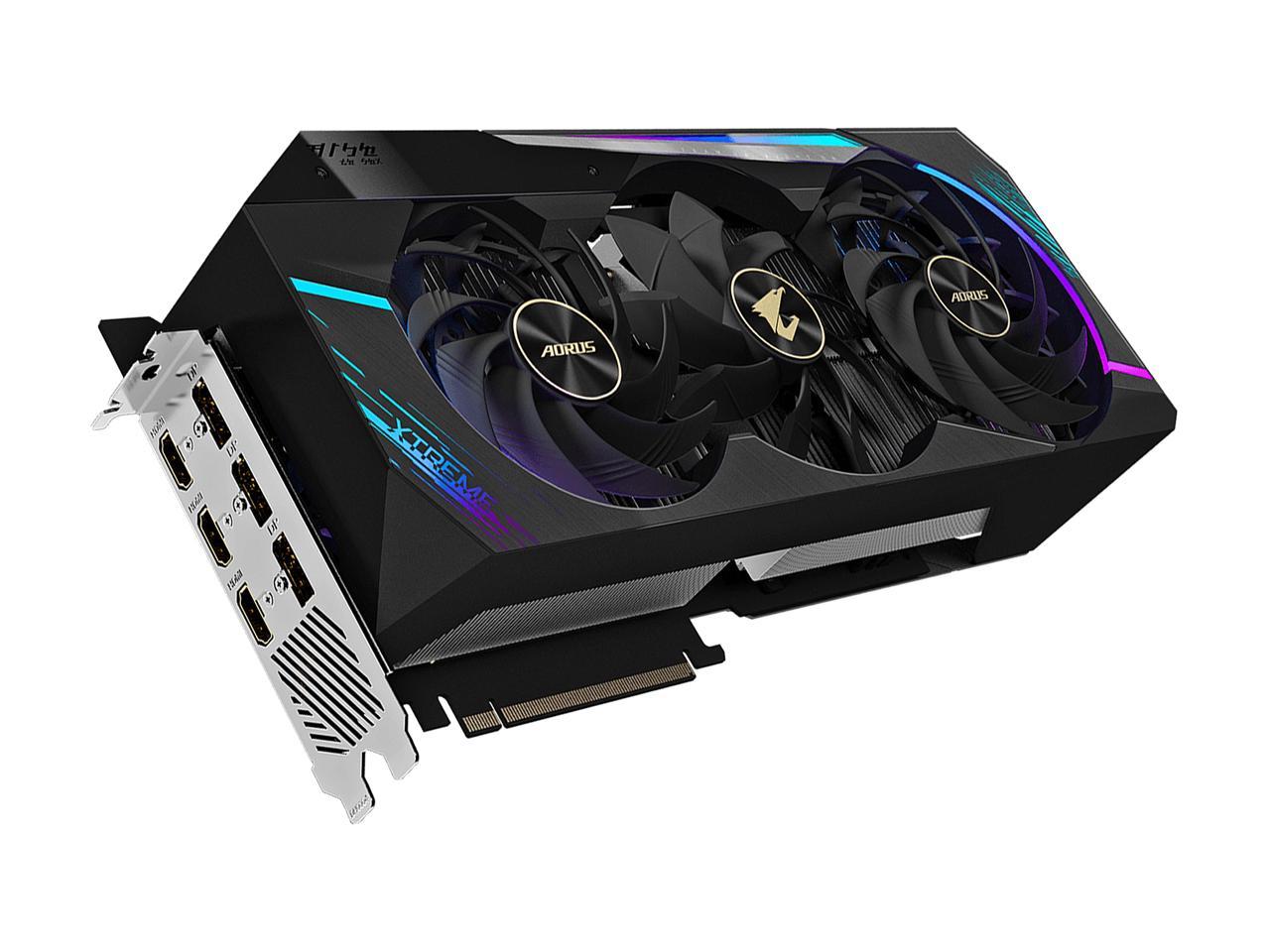 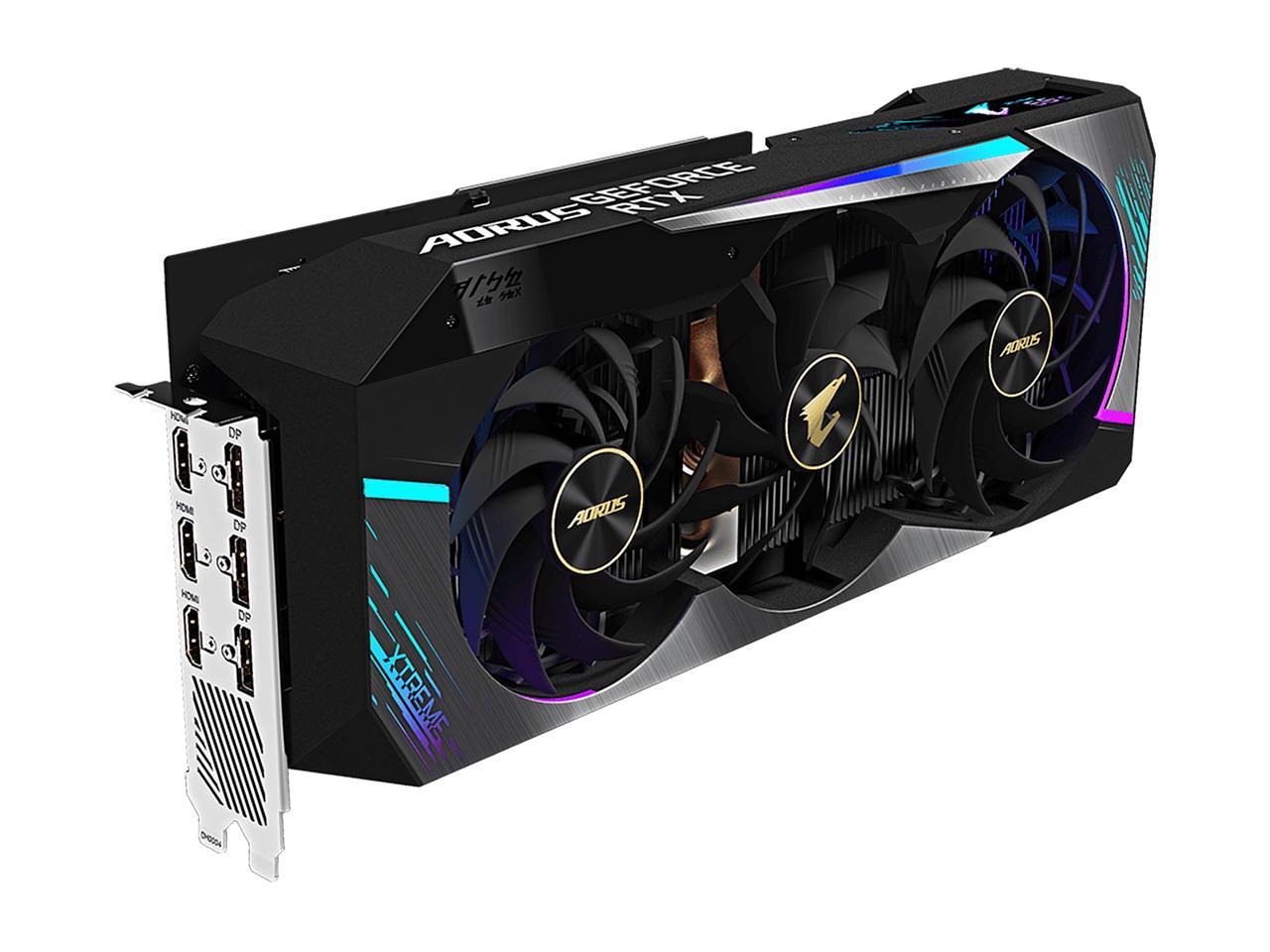 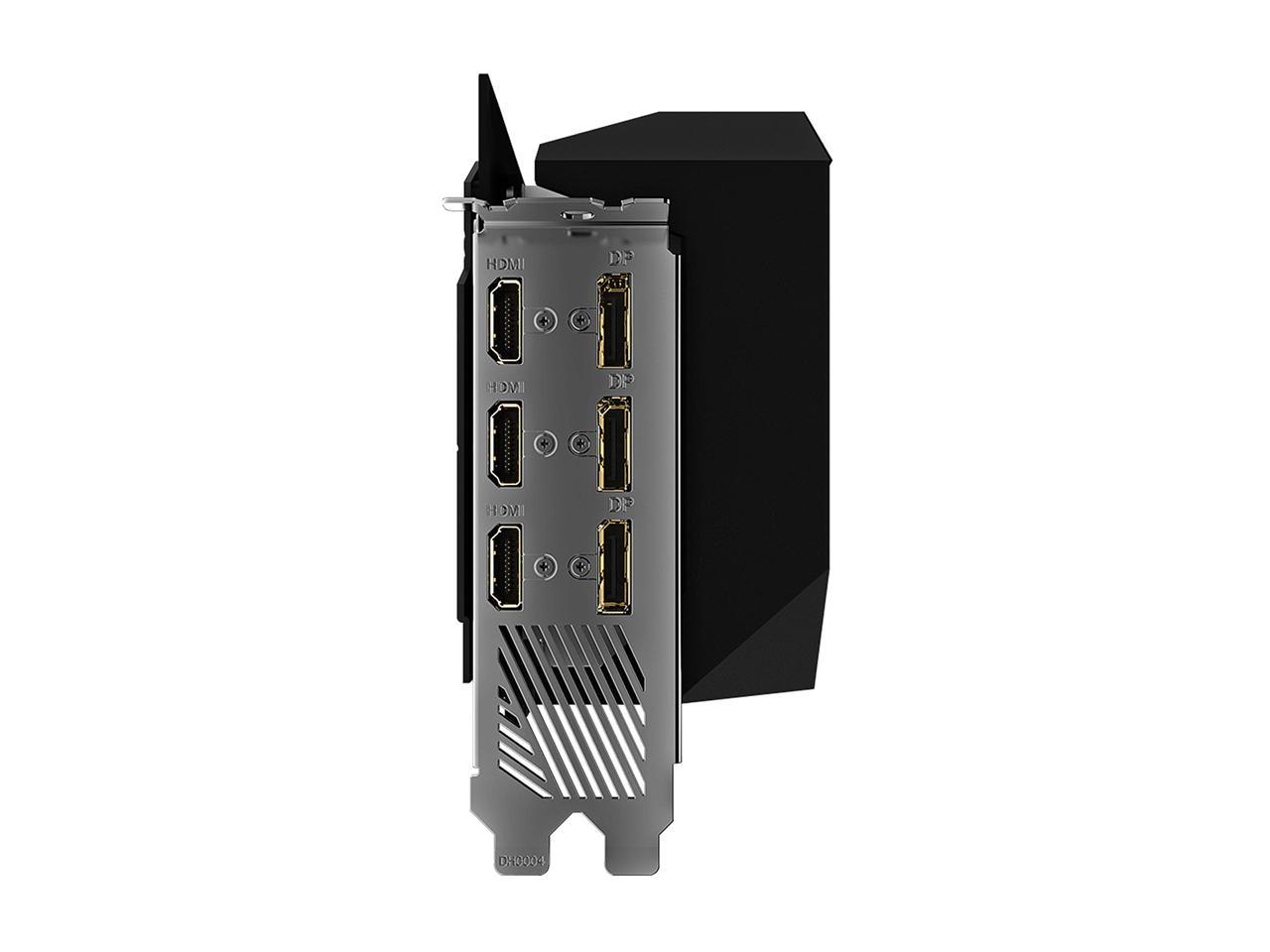 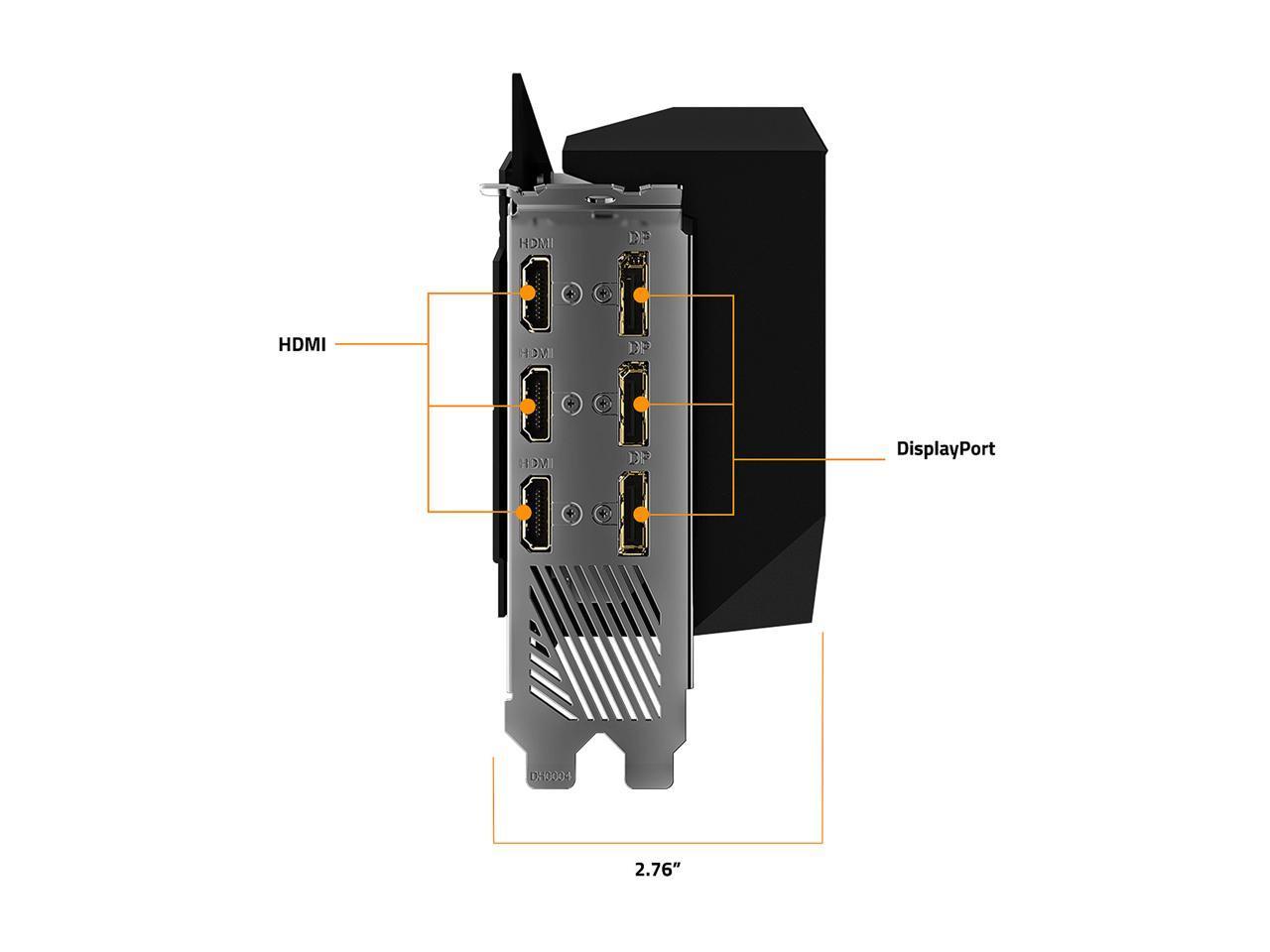 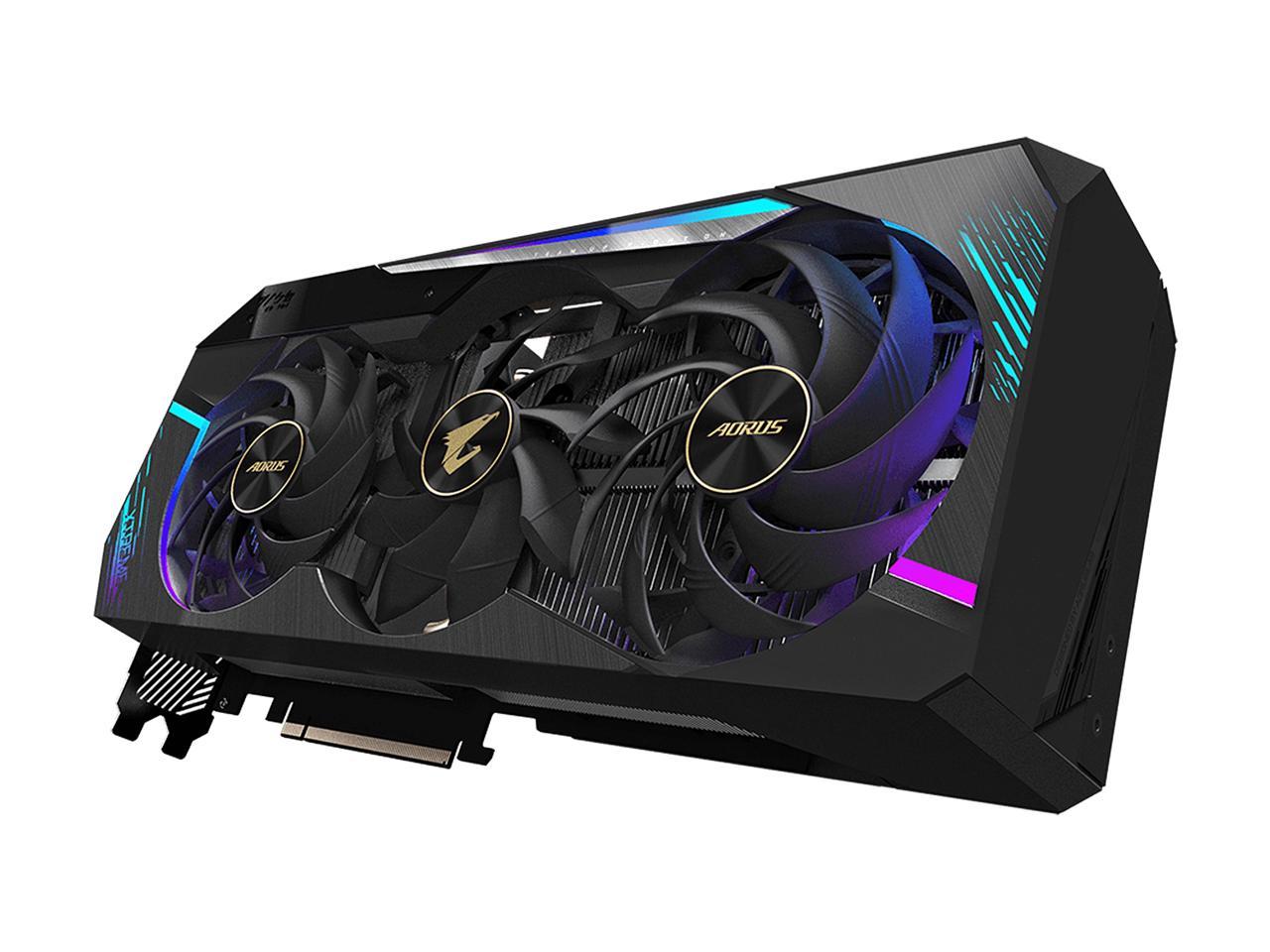 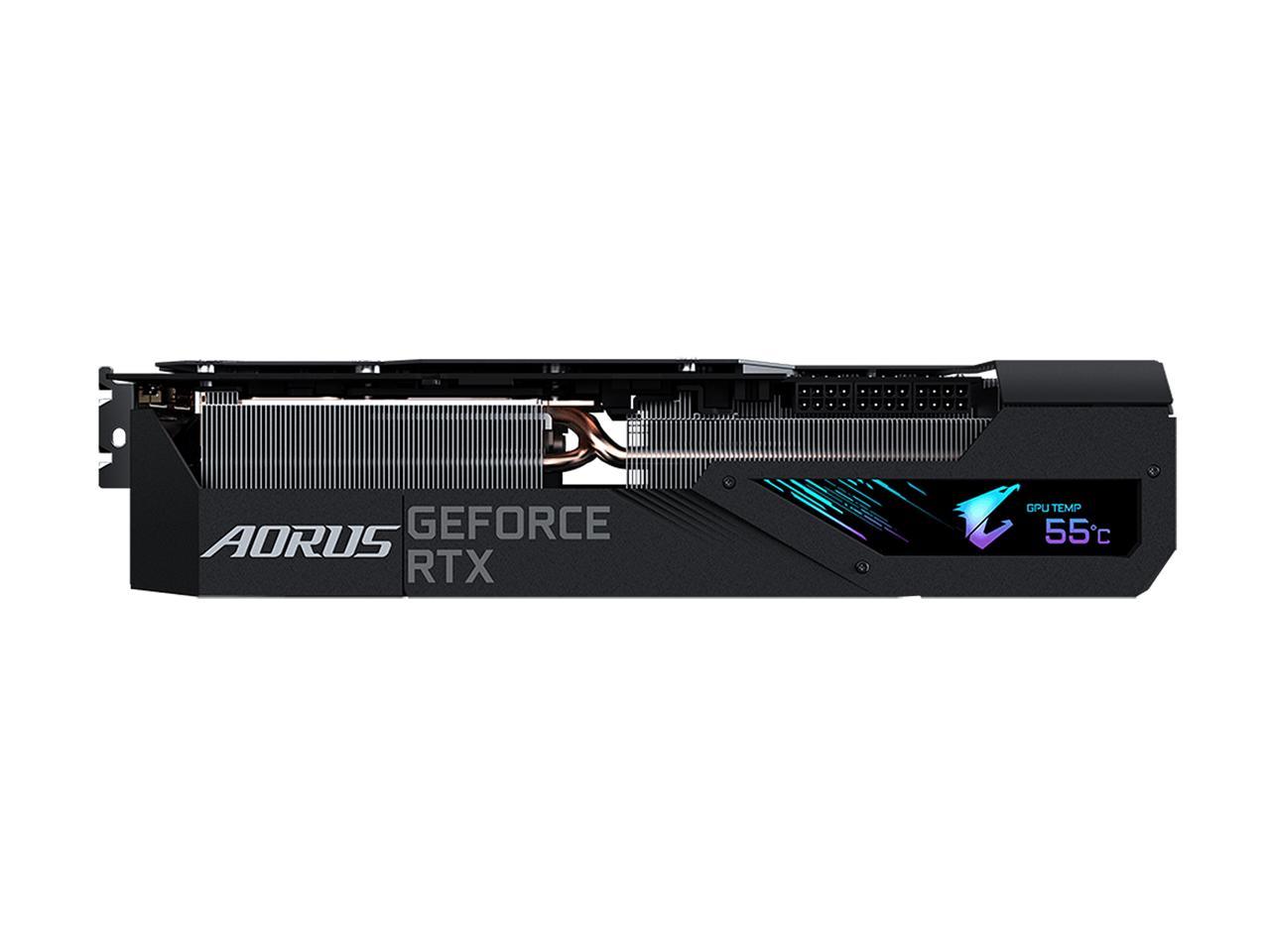 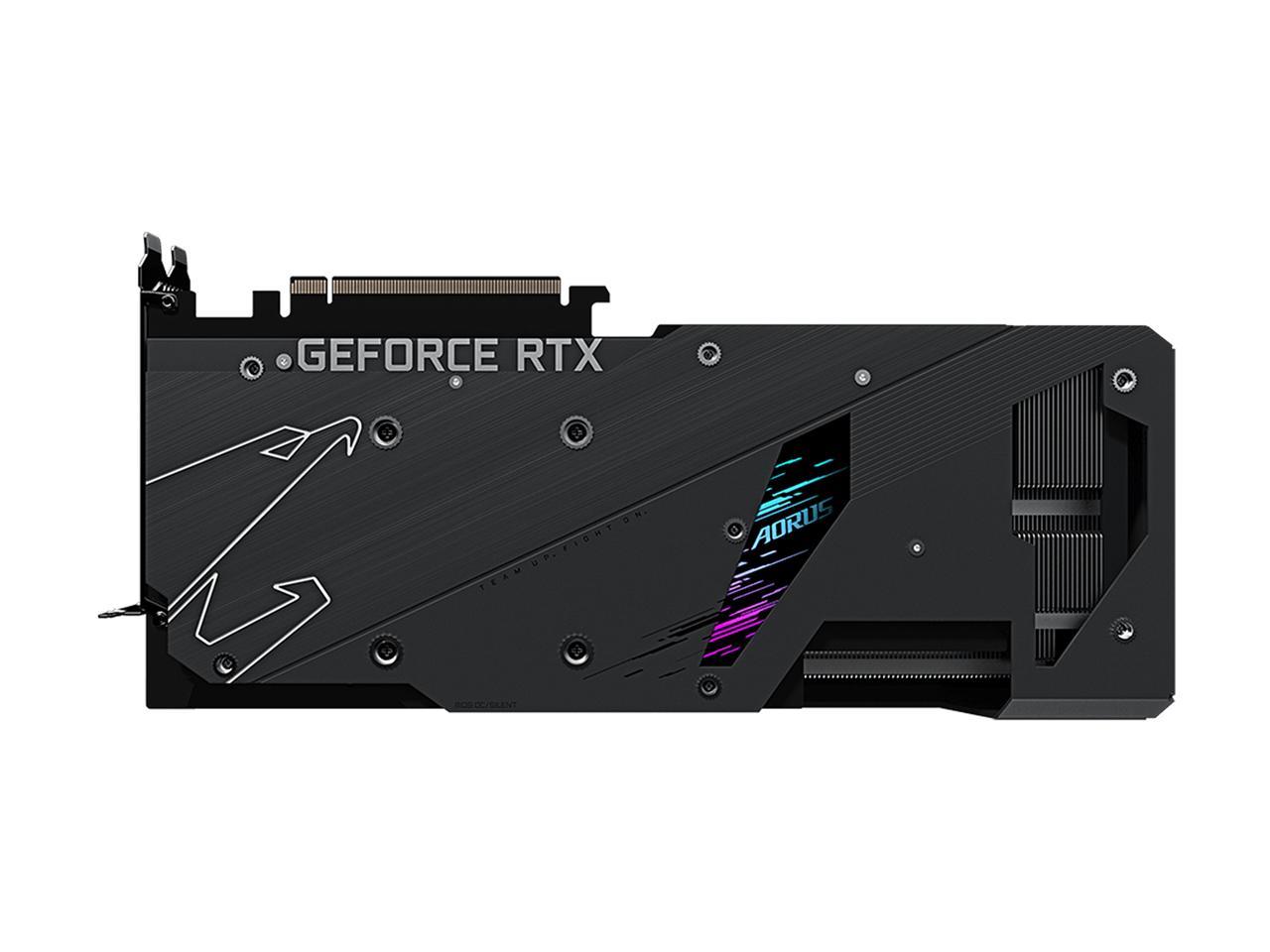 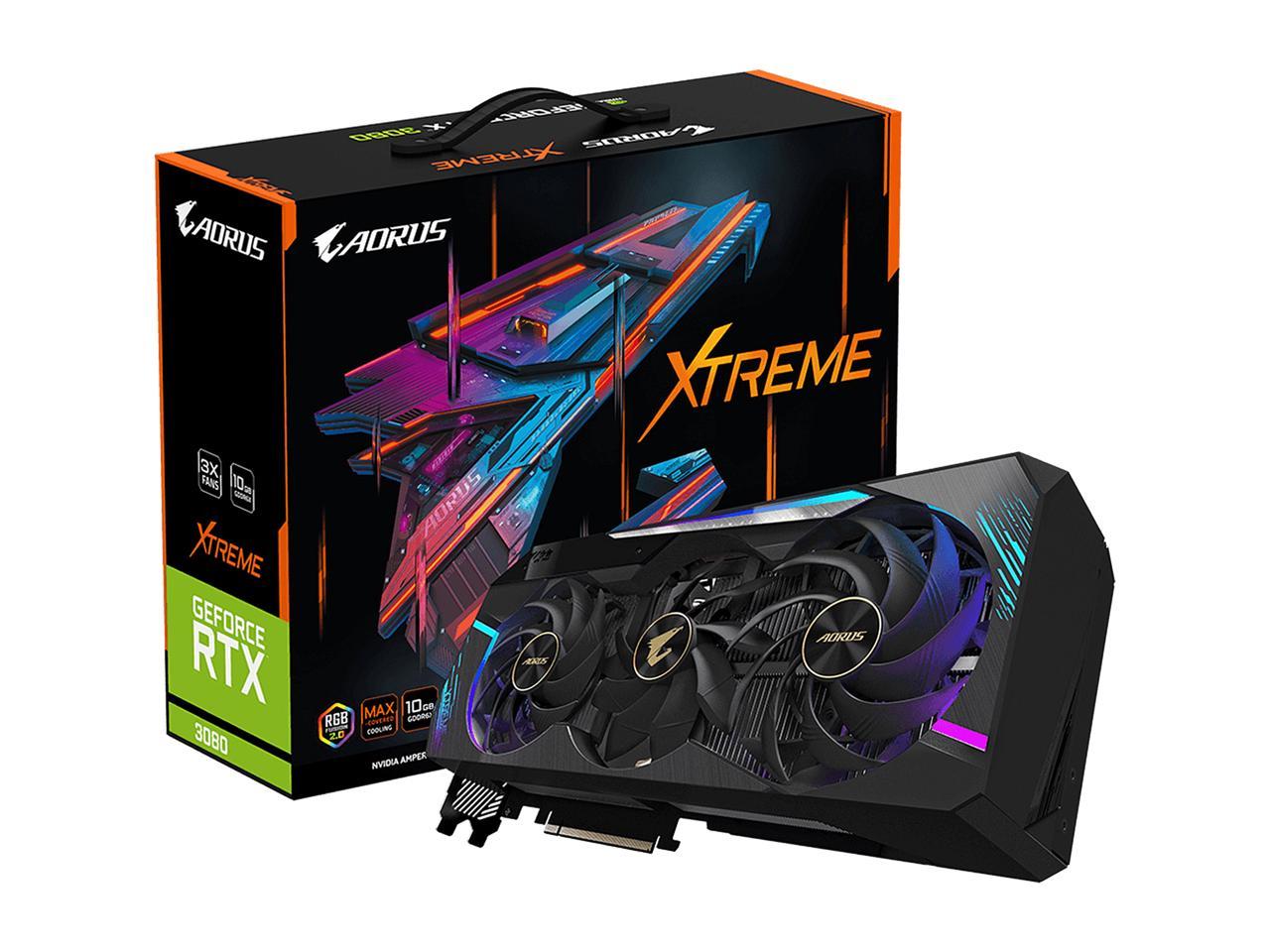 In the AORUS dimension, everything is constructed digitally. The lighting and patterns are mapped onto the products with an efficient, free flowing style.
Welcome to the Digital Code Era.

Reduce the turbulence of adjacent fans and increase air pressure.

Various GPU and VRAM status such as temperature, clock, usage and fan speed can be selected for real-time monitoring.

Support jpg, bmp and png file types. You can crop the image to fit.

TEAM UP. FIGHT ON.

GeForce RTX 3080 with 10G memory and 760 GB/s memory bandwidth has 8704 CUDA® Cores, 2nd gen ray tracing cores and 3rd gen tensor cores operating in parallel. It is the most suitable solution for those who are gaming, rendering, and developing A.I. technology.

You can choose 3xHDMI or 3xDP for your monitors without any adaptors. (Option 4 views)

When experiencing any power supply abnormality, the indicator will alert gamers by flashing light.

Excellent circuit design with the top-grade materials, not only maximizes the excellence of the GPU, but also maintains stable and long-life operation.

EXTREME
OVERCLOCKING
The graphics card uses the better power phase design to allow the MOSFET to operate at lower temperature, and over-temperature protection design and load balancing for each MOSFET.

FRIENDLY
PCB DESIGN
Fully automated production process ensures top quality of the circuit boards and eliminates sharp protrusions of the solder connectors seen on the conventional PCB surface. This friendly design prevents your hands from getting cut or inadvertently damaging components when making your build.

INTUITIVE
AORUS ENGINE
Clock speeds, voltage, fan excellence, power target can be monitored and tuned in real-time according to your own preference through this intuitive interface.

Pros: Temps have not exceeded 71C on both dual monitors and VR running games at 1080 or 1440, frame rates 15-20% higher than the EVGA 3070 FTW3 that was previously installed, leaving on non-OC bios switch as performance is that good!

Cons: Size on a card of this class is always an issue, Im installing a proper anti-sag bracket shortly

Overall Review: Temps have not exceeded 71C on both dual monitors and VR running games at 1080 or 1440, frame rates 15-20% higher than the EVGA 3070 FTW3 that was previously installed, leaving on non-OC bios switch as performance is that good! Ill be swapping out the R5-3600x for a higher-performance CPU soon. Mobo has PCIE gen 4 slot so we are getting full speed from the GPU

Overall Review: Shipping was WAY faster than I could ever have expected. Hong Kong to the US in 3 DAYS!

1 out of 1 people found this review helpful. Did you?
Anonymous
Ownership: 1 month to 1 year
Verified Owner
Black Screen followed by fans revving up and system crash!10/10/2021 3:28:03 PM

Overall Review: Worst experience I've ever had. It started with a couple of crashes which I though the driver update fixed it. But now, I can't spend more than an hour with it before it crashes again. It's either LCD crashing or just black screen with fans revving up 100%.

Cons: Original review bashed the software, that still holds true. Didn't work and also prevents pc from sleeping or monitor turning off. New gripe was stability. Lots of crashes within 20-30 minutes of starting a game. I removed everything that could touch it or its sensors, used DDU multiple times, and tried a reimage. After one crash I just put my previous card in and it worked without issue. PSU is a Corsair AX1000 and about 2.5 years old, never taxed to the max.

Overall Review: Clearly some are getting stable 30 series chips, I fear the shortage and pandemic may have compromised QA. That does not excuse the software though, that is just awful. Had to return it to Newegg today as defective. Kinda sad, it will probably be the only 3080 I see for a long time at best. Major excitement ended in complete disappointment.

1 out of 1 people found this review helpful. Did you?
Manufacturer Response:
Dear Customer, Thank you for your comments. We apologize for your difficulty with your GIGABYTE product. Please contact GIGABYTE RMA department for further assistance about graphic card warranty service by phone at 1-626-854-9338 opt. 4 Monday through Friday from 08:30 ~ 17:30 PST. GIGABYTE VIP Support Team
Anonymous
Ownership: 1 week to 1 month
Verified Owner
3080 Xtreme8/26/2021 8:48:37 AM

Cons: Its a very big card make sure ya have the room.

Overall Review: Came from a 1080 Pascal. Big noticeable upgrade. Happy with product. Even though the card is big i still give it 5 eggs.

Pros: - Runs extremley cool thanks to gigantic cooler - Built in LCD screen is cool, if it will work for you - Plenty of RGB

Cons: - Really thicc, hurting exapndability - Gigabyte Aorus Engine and RGB software sucks - BIOS OC mode is not worth it at all

Overall Review: I got the card a few months in August. I am writing in October. The card is huge, 4 slots. This means that it removes most PCIe expansions. My full ATX board keeps 2 slots, but that means I had to choose between my 3 PCIe cards. Goodbye extra USB ports. I also dont know of any case that will support a four slot card vertically mounted. Having room for airflow is a whole nother story. It only uses two PCIe brackets though, so the main obstacle is case width. OC mode pulls a lot more power and heat, doesnt really do much compared to the silent mode, which is already faster than any founders edition and even some of the AIB 3080s. BIOS OC mode is good for about 16,000 in Time Spy, while Silent mode will do 14,500. BIOS OC mode will run the card over its rated TDP by about 20 W, while silent mode runs it about 20 W under. The main draw of Nvidia is the DLSS, and the better drivers. As soon as they were installed, all of my weird graphics driver issues disappeared. Games I couldnt play due to crashing became playable. I like AMD CPUs, but the GPU drivers leave something to be desired. It always could have been localized to my system though. The card requires a minimum of 850W PSU. Anything less, and you are asking for trouble. This card is not refundable on Newegg, just replaceable, so be aware of that. Has a 4 year warranty included. I cant get RGB fusion 2.0 to work with the card, so I just have to live with the rainbow puke RGB and the default animation on the LCD screen, which for some reason is not the cards temperature. Hopefully this will be fixed in an update for the software. It also isnt like you can mount it vertically to avoid seeing the screen. If you are one of the many 1080p or 1440p gamers out there, good chance you will never see this thing hit full utilization. Most games run into a built in FPS cap or engine limits first. Especially with V-sync on and DLSS in even quality mode. In COD Warzone I have hit above 300 FPS, just barely. Thats at 1080P, DLSS ultra performance, and everything on lowest settings or disabled. Thats the kind of FPS one might expect in an e-sports title. All that and I didnt crack 70 C. If using this for media creation, good news. Its a beast. Using Windows photos to trim down video, which is mostly what I do, I was impressed. Able to trim a 43 min video down to 2:30 in under 20 seconds. Much better than my old card, which would take 10minutes or so to do the same thing. 10 GB of VRAM seems to be plenty. Ive seen it hit 7 GB in RDR2 everything on ultra, 1440p DLSS quality setting. Using the CudaHashcat tool in Kali Linux I never cracked 75c. Hashing is basically the hardest you can hit a GPU, so those temps are pretty good. Hashcat isnt used for crypto, its for password cracking. Running the Port Royal stress test in 3D Mark I saw max temps of 75c GPU, 82 hotspot, and about 83 memory temp. It would appear this card does not suffer from the overheating RAM issue. Power draw under max load during this stress test rose to 380+ Watts. It was run in BIOS OC mode. You need to use three separate power cables for this card. If you intend to run it in Silent mode, and you do not have any other PCIe cards, you might be fine with two. As for the PCIe debate, dont worry if youve only got 3.0. Running RDR2 benchmark at 1440p completely maxed no DLSS, the highest I ever saw was 16% interface load. Using GPU-Z from techpowerup to monitor. PCIe 3.0 is about half the speed of 4.0 so assuming we double that its still only 32%. Even running in PCIe 3.0X8 mode you probably would not see a decrease is performance in gaming. Some people seem to have been having issues with the card being DOA, so good luck with that. My card was fine right out of the box. I just decided to embrace the rainbow puke, and went full bore getting new RGB strips and whatnot.

Pros: Is a 3080 the card speaks for it self, performance wise the card is fantastic

Cons: The rgb like with most programs is a nightmare and doesnt want to work

Overall Review: If you wanted the looks maybe choose another brand

Cons: RGB Fusion 2 is a pain to get working with GPU and Z390 chipset I had to set a custom fan curve or it ran to hot. Cooler should work better considering it's size and fans. I'm thinking water cooling would do wonders for this card but should not be necessary. I don't think the fans will keep it cool enough at 100% load.

Overall Review: I was shocked at how hot it ran out of the box @ 70% load. This was correctable in using the Orus Engine. This is not a silent card but not very loud either even with fans at max. I think with water cooling it could be further OC'd. LED screen is a cool addition but difficult to use with RGB fusion. Better than average 3080 GPU but runs to hot considering how it is marketed. You will need fans of max to use anywhere near 100%.