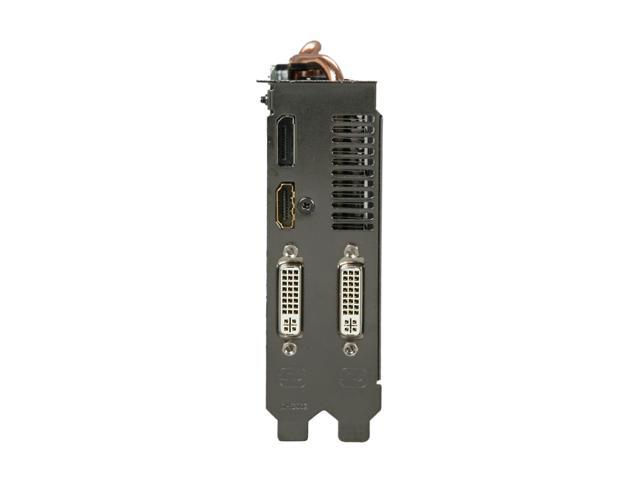 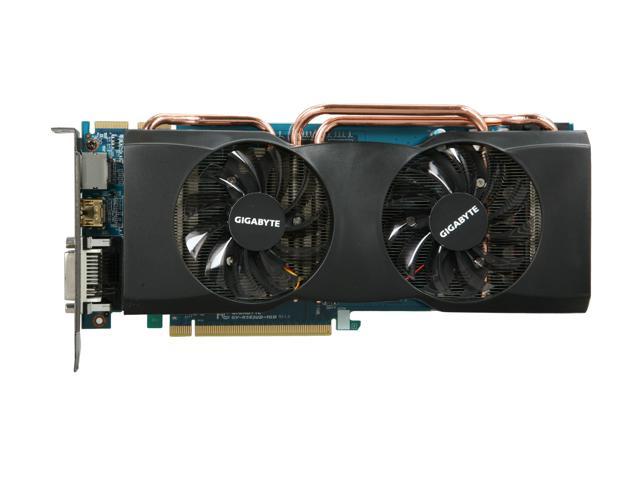 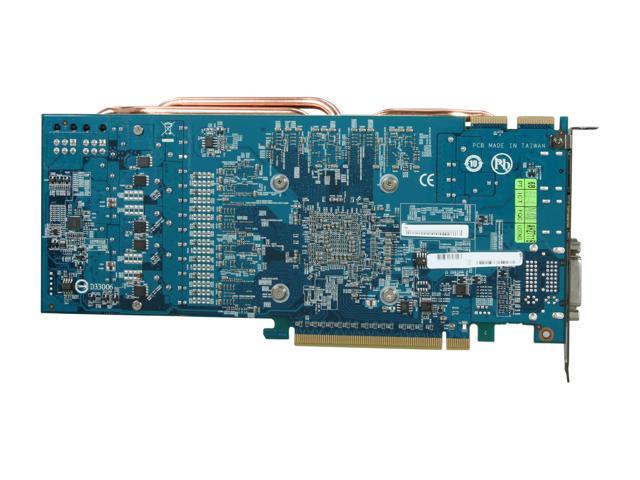 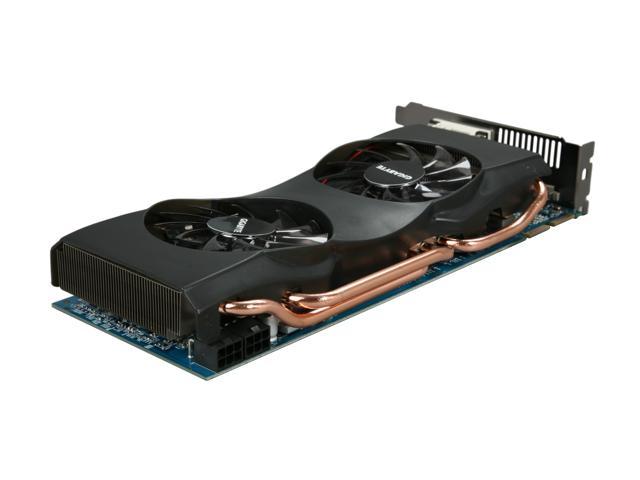 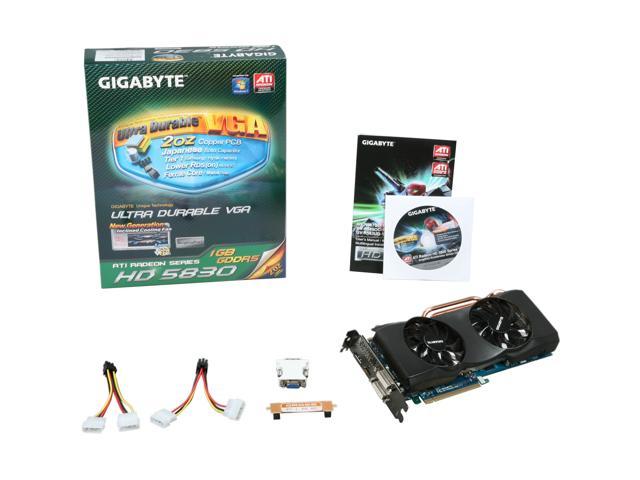 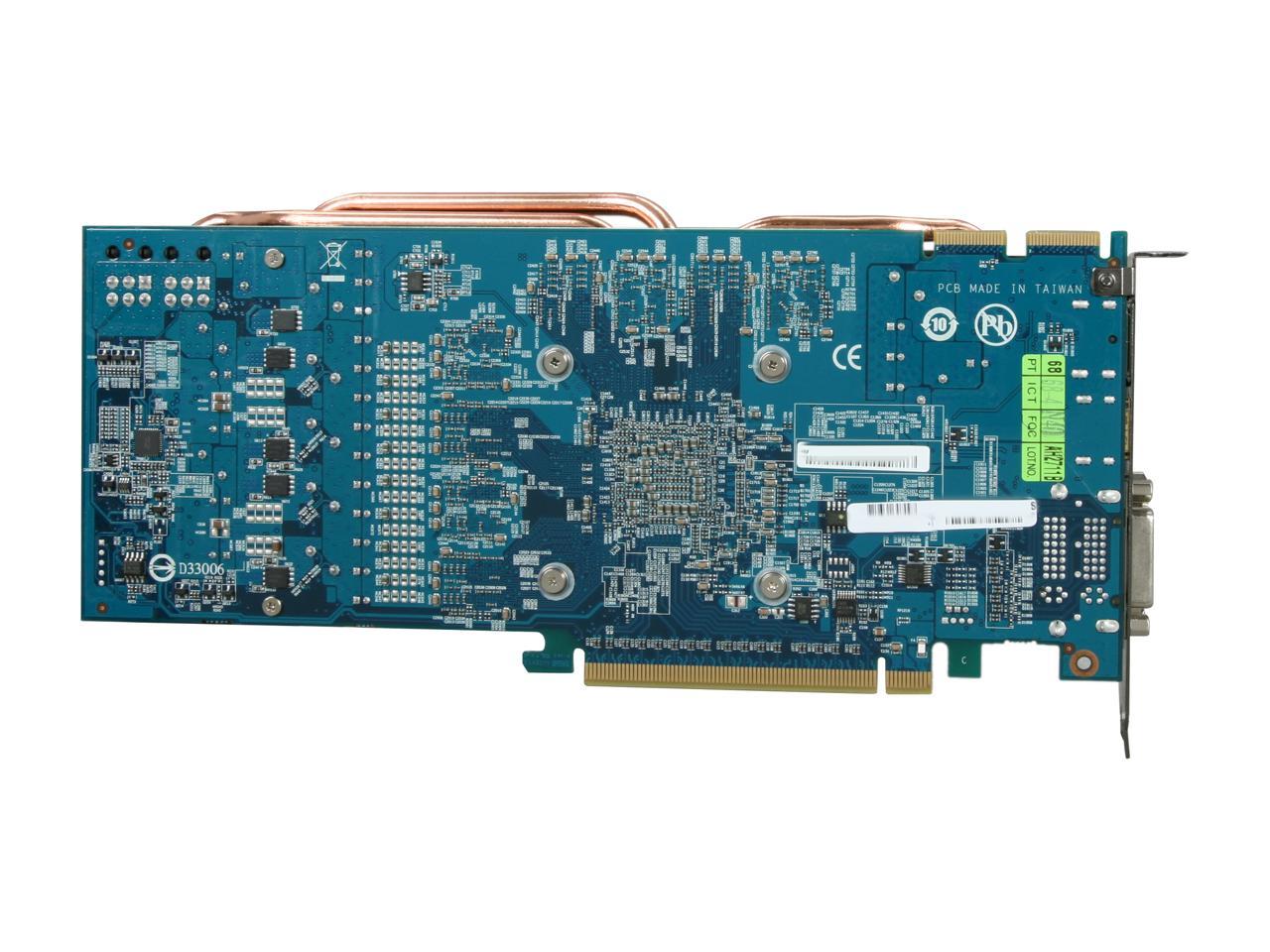 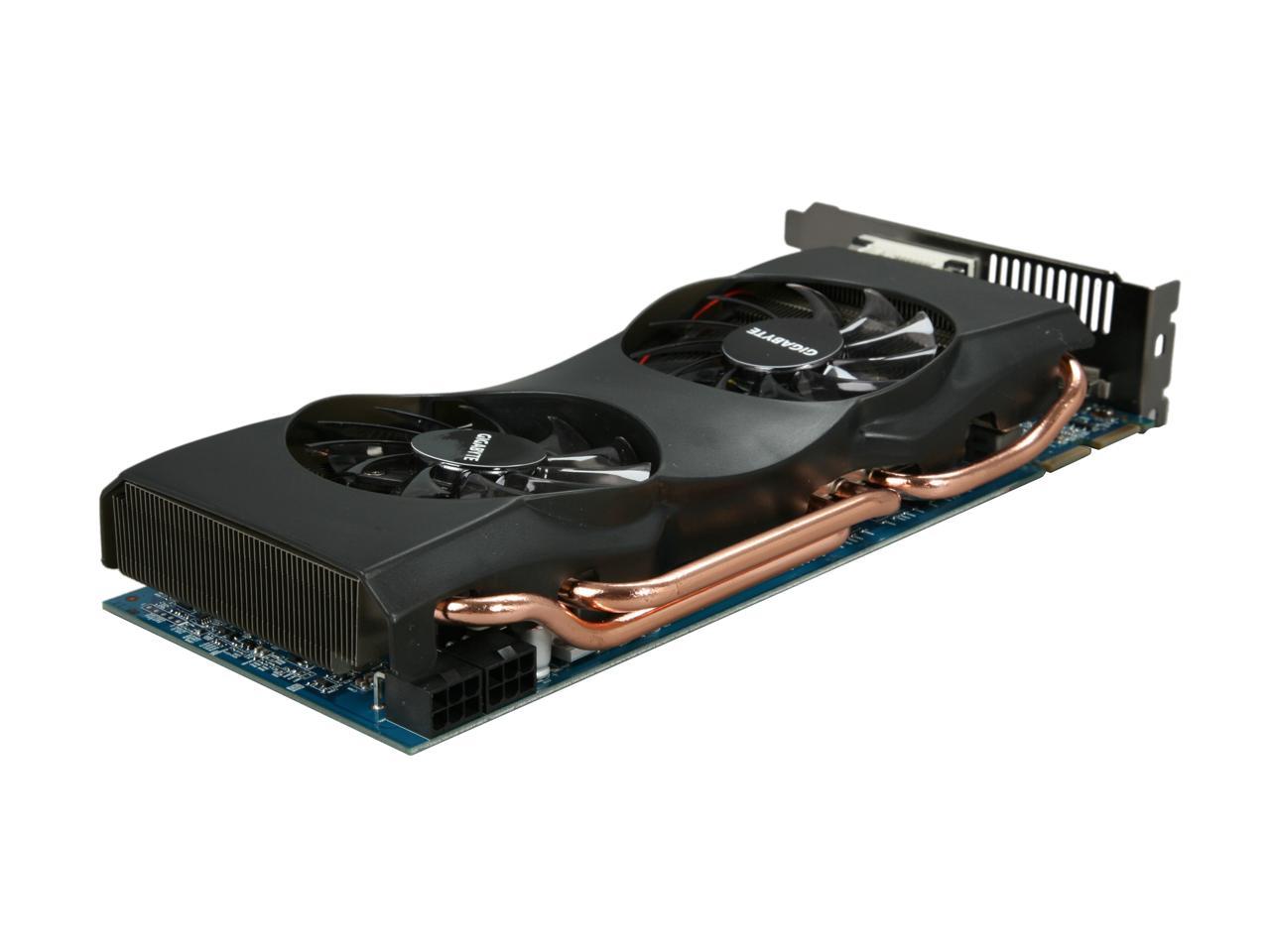 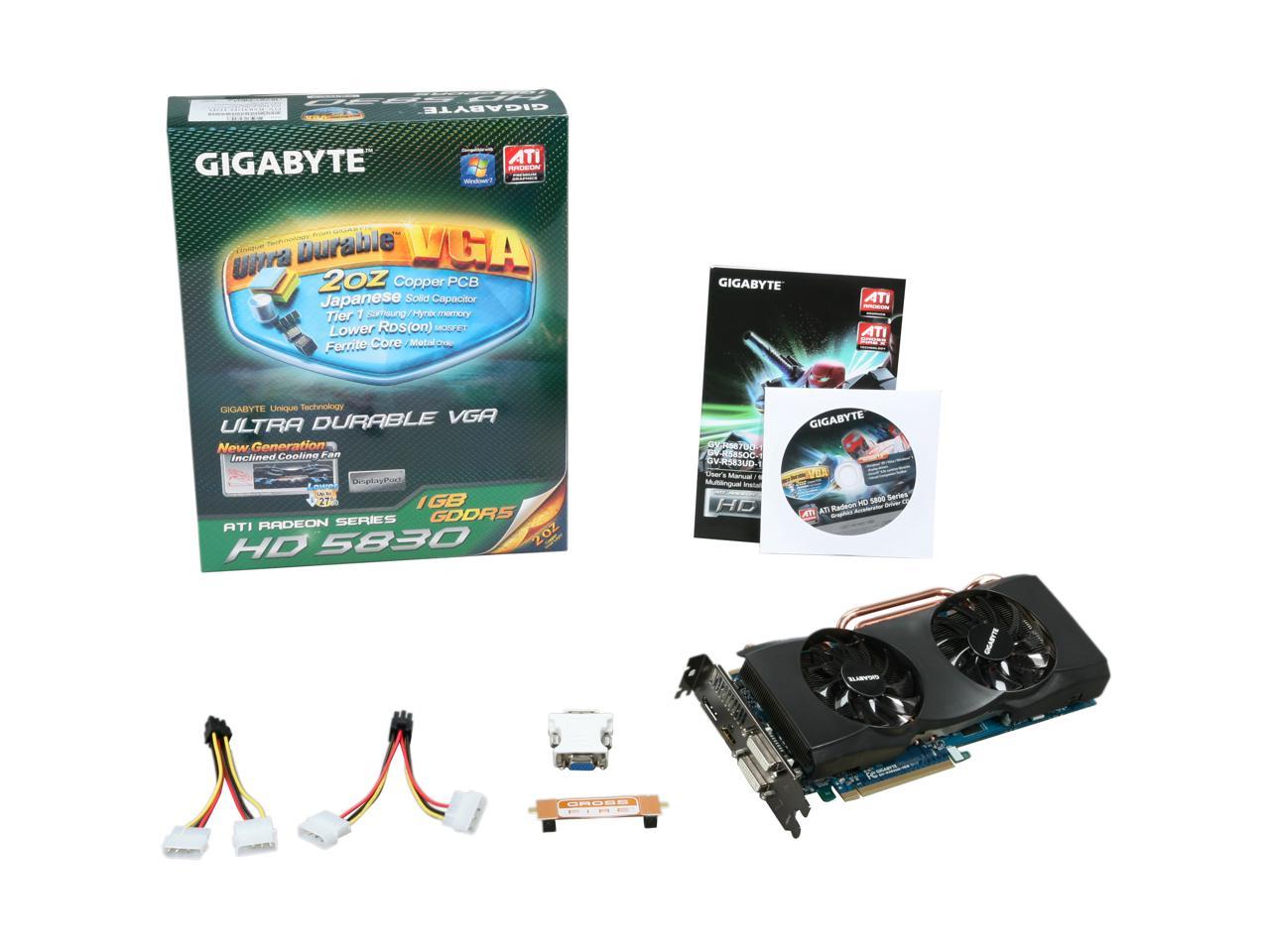 (118) Write a Review
OUT OF STOCK.
Overview
Specs
Reviews
Gigabyte brings the power of graphics ‘supercomputing’ to enthusiasts with their GV-R583UD-1GD featuring Ultra Durable VGA and multiple interfaces (dual-link DVI, HDMI and DP). Expand your visual real estate across up to multiple displays and get lost in the action with revolutionary ATI Eyefinity Technology. Using ATI Stream technology, accelerate even the most demanding applications and do more than ever with your PC. With full support for Microsoft DirectX 11, these Radeon HD 5830 GPUs enable rich, realistic visuals and explosive HD gaming performance so you can dominate the competition.

Learn more about the GIGABYTE GV-R583UD-1GD

Pros: I just wanted to mention something that I just discovered. This thing is super quiet at 100% fan speed! I was messing with fan speeds for the first time just a few minutes ago. I was kinda freaking out because I could not hear much difference between its default setting at 38% and 100%. Thought one of the fans was broken or something so I took off the side of my case to check it out. Couldnt believe my eyes, working perfectly normal. This is soooo much quieter than my HD4890. Both fans work fine and blow plenty of heat around. This is just another huge perk for me. I highly recommend this card.

Pros: Quality. Gigabyte makes some excellent PCBs and their video cards are another example. VERY quiet fan system. Much quieter than my aging 8800GTX card I was replacing. I skipped the shipped drivers and downloaded the latest and greatest from ATI. Bam! Worked like a charm...and sooo many features. Insane. Hooked up my 50" plasma via HDMI and my LCD monitor via DVI...simple and to the point.

Overall Review: I should have upgraded sooner, but I was waiting to see what Nvidia had up its sleeve with their new DX11 compliant boards. Yeah...they might be faster, but they suck power and spew out atrocious heat. Not this time guys...will ride with ATI for a while. Hurray for competition!

Pros: this card is built with a very high quality from gigabyte, dual fan and copper cooling system is great and you can tell there has been an actual plan and design to cool in the best way possible. with ATI catalyst overdrive it's easy to overclock memory and gpu to the 5870 specs and more. but you are spending half price. yes you do have 1120 stream processor vs 1600, which is a perfect 30% less, but 50% less money!your PC will not always feel the difference.THEREFORE $200 IS A STEAL, buy it if you want more for your money, 2 of this in crossfire..same price of the 5870 will perform much better..as for the "Nvidia people", the spec of the new Fermi does not go close to this one, u can argue about the driver, but those people that gives negative review does not even know to uninstall previous drivers!!update bios, defrag hard drive etc..when it comes to PC, you need to do your homework and know what U are doing, otherwise pay someone else to do it instead! far cry2,CoD5,Crysis Amazing!

Cons: this card does not have cons.. when your case it too small to fit the card, which is long and big, it's not the card fault, but yours and of the case. Psu connectors are on the Side instead at the end so you will be able to use those cable in a mid tower, u may have to relocate the hard drives in a different hard drives bay = normal, it's not a reason to give a bad review, you're opening and making your rig nice and powerful, so that is what you do, open your case and install your stuffs= normal (u want to modify your car engine: u need to open the hood and move parts around, right?!?!) you will need a powerful power supply of course, not lower the 650 watts, preferably with 2 dedicated cables for the graphic card. update your motherboard bios first, cancel every previous graphic cards driver, ideally a fresh installation of the OS, go to AMD/Ati web site Download the new 10.7 drivers, if Nvidia chipset, which is a competitor of amd, is not compatible somehow, what r u expecting??!

Overall Review: the card itself is great, if u don't know what u r doing, u may have some troubles, but that will happen with anything u do inside a PC, and it is not the hardware fault, is mostly the OS, u always need to tune up your software and find a way to make everything work ok. Now I've install this in both Win XP and Win 7 ultimate 64, without problems, I've a MSI 790 GX,Amd x4 620,4gb hyperX DDR3 1600,2WD 500Gb,it took a few attempts of turning the PC on, after disabling the on board graphic from the bios, but I had a new PSU + old hard drive eide failed, so that was not the card faults, bench marked it and overclocked without no problem, the graphic looks amazing, I had blu ray playing on my LED TV, and my viewsonic monitor at the same time, awesome! if you have a few years old card, this will be blowing your mind with directx11, but better have windows 7 to really enjoy it. Anyway if you have a 3+ years old computer, better upgrade everything, or just stick with the5770 till u can upgrade

Pros: Price! This card runs much cooler than other 5830's I have tested. The dual fan cooler and inclined positioning, massive heat sink with pipes do an amazing job allowing many people to achieve 900 MHZ or more overclock. Rumor has it Zalman had a hand in this design... This card performs better than the 4870 4890 and runs much cooler, takes less power and has direct X 11 AND eyefinity. All for $200. I dropped this card into my Gigabyte 790 fx with CC 10.6 and had NO issues. Gigabyte products are built extremely robust. I mean 2 oz dual copper P.C.P. board on a Graphics Card! And Solid Capacitors and low ferrite cores? This is quality stuff here. You need to have a quality and power enough psu for these cards. I think people should have these cards installed by service techs...not many people seem to know what they are doing...

Cons: The card is big, but that is because it is essentially a 5870 that is locked. Unfortunately there is no way to unlock the card. But for the money...it is understandable.

Overall Review: All this talk about driver issues.... To the reviewer below...I very much question the "high understanding" of many reviewers... You can't get the driver to work so you will go back to Nividea? How much of a "high understanding" can you have? I am not trying to be mean...but don't knock the card if you can't get it to work. Uninstall your old drivers first. Especially if you had an Nividea drivers. Also if you had an 8800 series card...your psu may not be powerful enough to power the card. I have found that many people have so much "junk" on their hard drive that even they don't know why stuff doesn't work right. They end up ranting about how bad a series card is and saying they RMA it and still have the same issue even with the new drivers. I have fixed numerous issues like this for customers...install better psu...reformat, back up data, clean install with card pluged in, install only necessary programs...and it works. Its typically not the card..its your set up/junk in h

Pros: Update from earlier review. This is a great card for the money. Works well with Windows 7 and Ubuntu 10.4 Lucid Lynx, new drivers released on 05-26-10 helped to resolve some performance issues in 2 D mode. Update your drivers people. I can now run games with a good performance to quality ratio that is pleasing to me. And that is what matters.

Overall Review: ATI has released new drivers that work great for both Linux and Windows. I now have Windows 7 installed and this card is fast. No it isnt the fastest but it gives great speed for a lot less money (as opposed to a 5870 or a 5970). Recent reviews have placed the performance of this card in parity to the 4970 which was ATI's former flagship GPU. Thank you Gigabyte for making a great product.

Pros: Plays all the popular games at highest possible settings... Starcraft II, Crysis, Bioshock 2, Oblivion, etc. crisp with at least 60 frames/sec at 1920x1080. Paired with 8GB of OCZ and an AMDx6 1055T

Cons: Took off one egg because out of the box, the card caused a trustworthy monitor to flicker occasionally in dual display mode. It seemed to happen when I minimized/maximized windows, or when I was trying to play a game in the opposite monitor. Anyway, this issue was fixed by updating the BIOS with a new version from Gigabyte, downloaded from their product page. Small hassle, but worth it.

Overall Review: The thing is freaking HUGE! My internal case temperature went up around 2 or 3 degrees when I installed it. Had to move my hard drives around in order to make room.

Cons: Some are whining about it's size but how could you not know that BEFORE you bought it? Failure to plan before building is not a card issue.

Pros: The card is fast and pretty much the best card you can get for 200.00 I did a considerable amount of research into the video card and found this one to be a best buy so to speak. But I did not do enough research into my motherboard.

Cons: A lot of people have said that this card is big but i really did not understand before i bought it. Please understand that this card is longer then a standard Motherboard. This card interferes with my sata ports and I had to remove my north bridge fan. If i put the card in slot #2 i had to remove my pc speaker connector. For my board the GA-K8N Pro SLI this card is horrible. After removing the SLI memory card and putting in just this card I got no display, trouble shot everything from memory bios updates and power supply with no fix.

Overall Review: Review your motherboard to make sure nothing is in the way of this card because A Lot of motherboards can't seat this card properly. If you have a ddr1 or ddr2 memory board with a nforce chipset any ati card may not work at all for you. In my research i found that some motherboards have a bios update which fix's the issue but most do not. I rated the card a 4 because the ati <-> nforce chipset issue is not the card manufacturers fault. In retrospect I should have realized that this card is too big for any motherboard with connectors near the pcie slots. I still plan to use this video card just not in the computer it was purchased for.