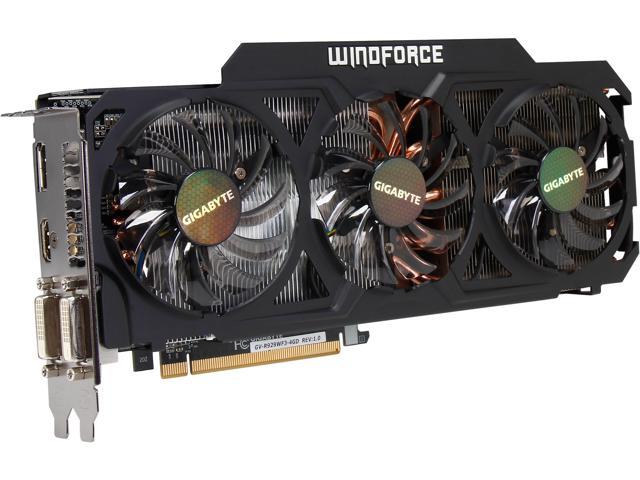 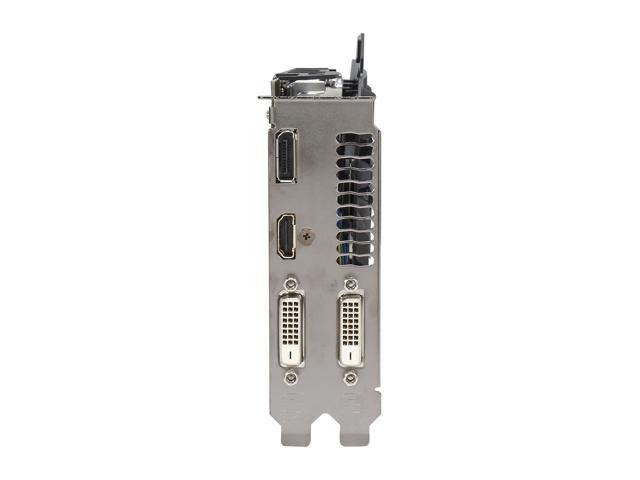 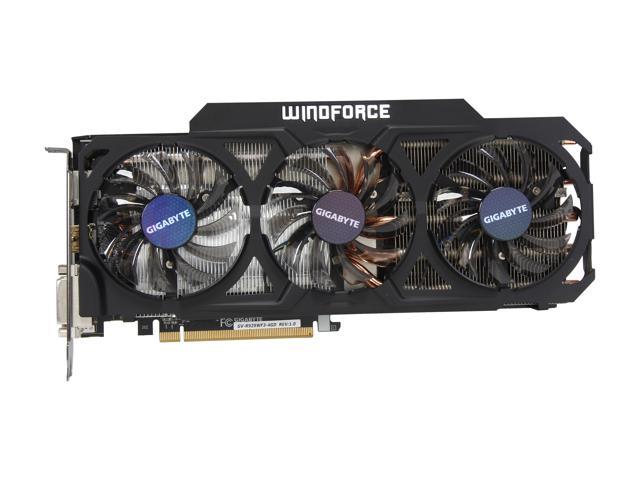 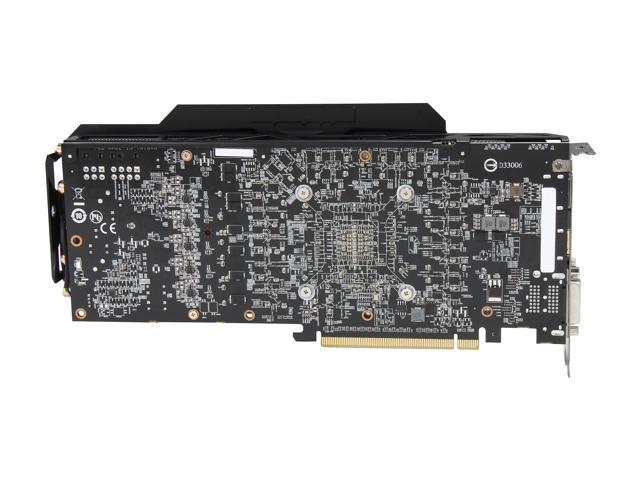 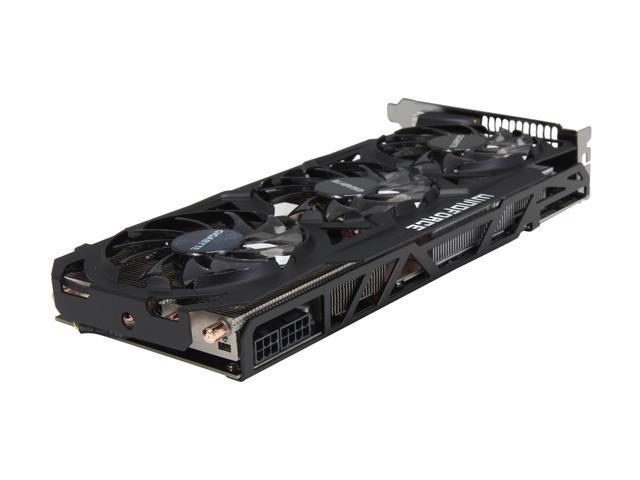 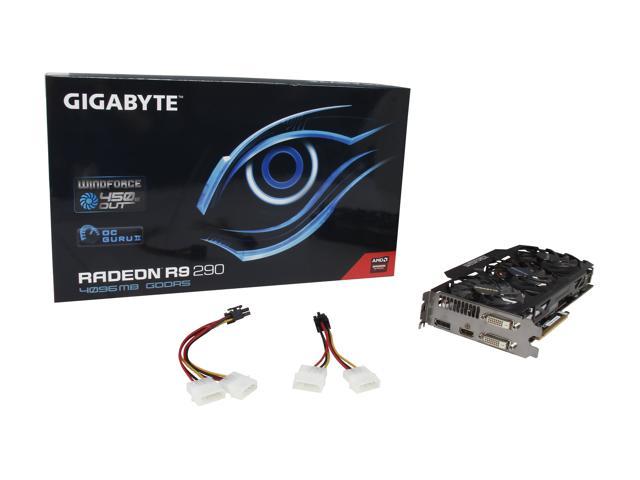 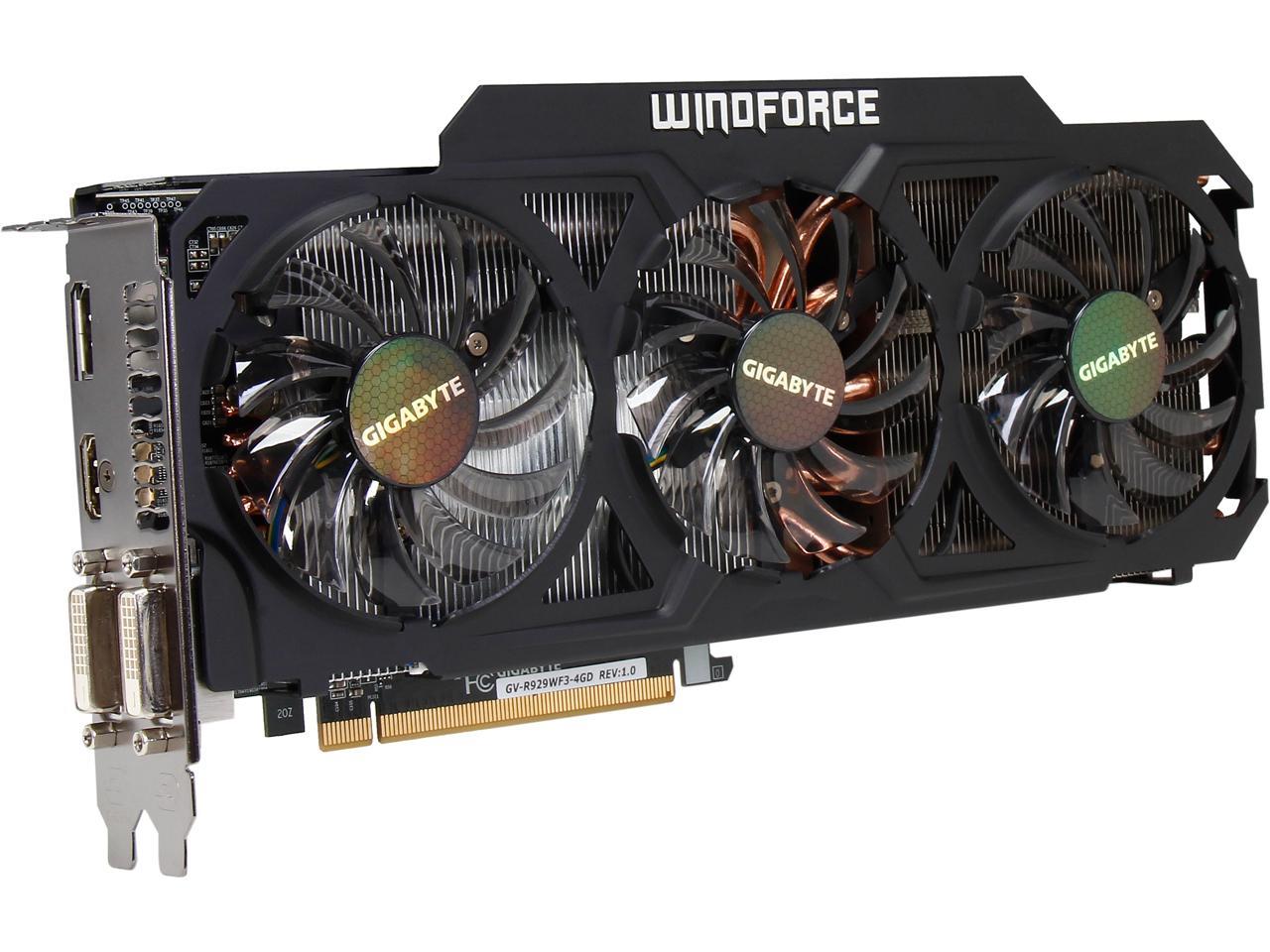 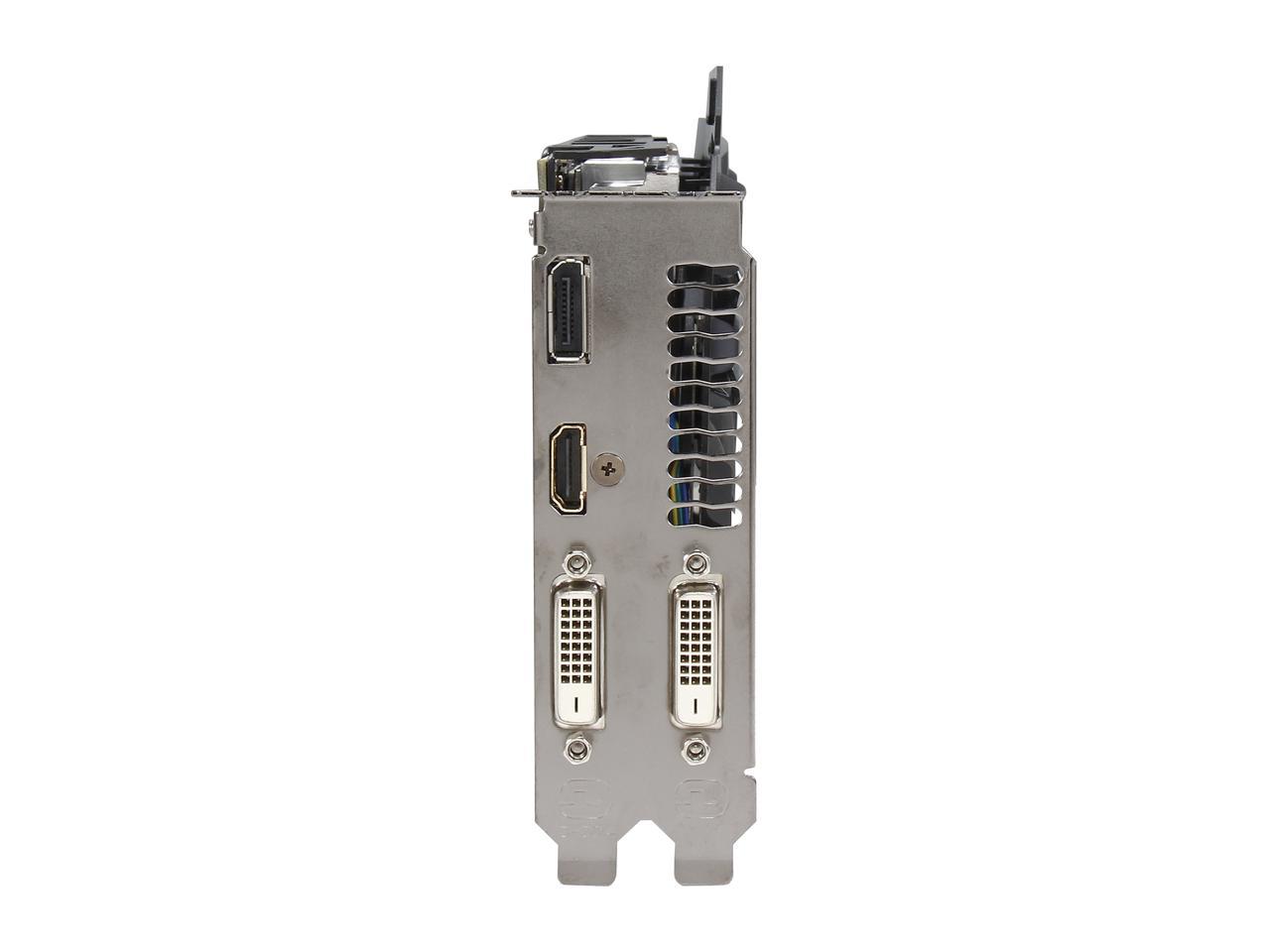 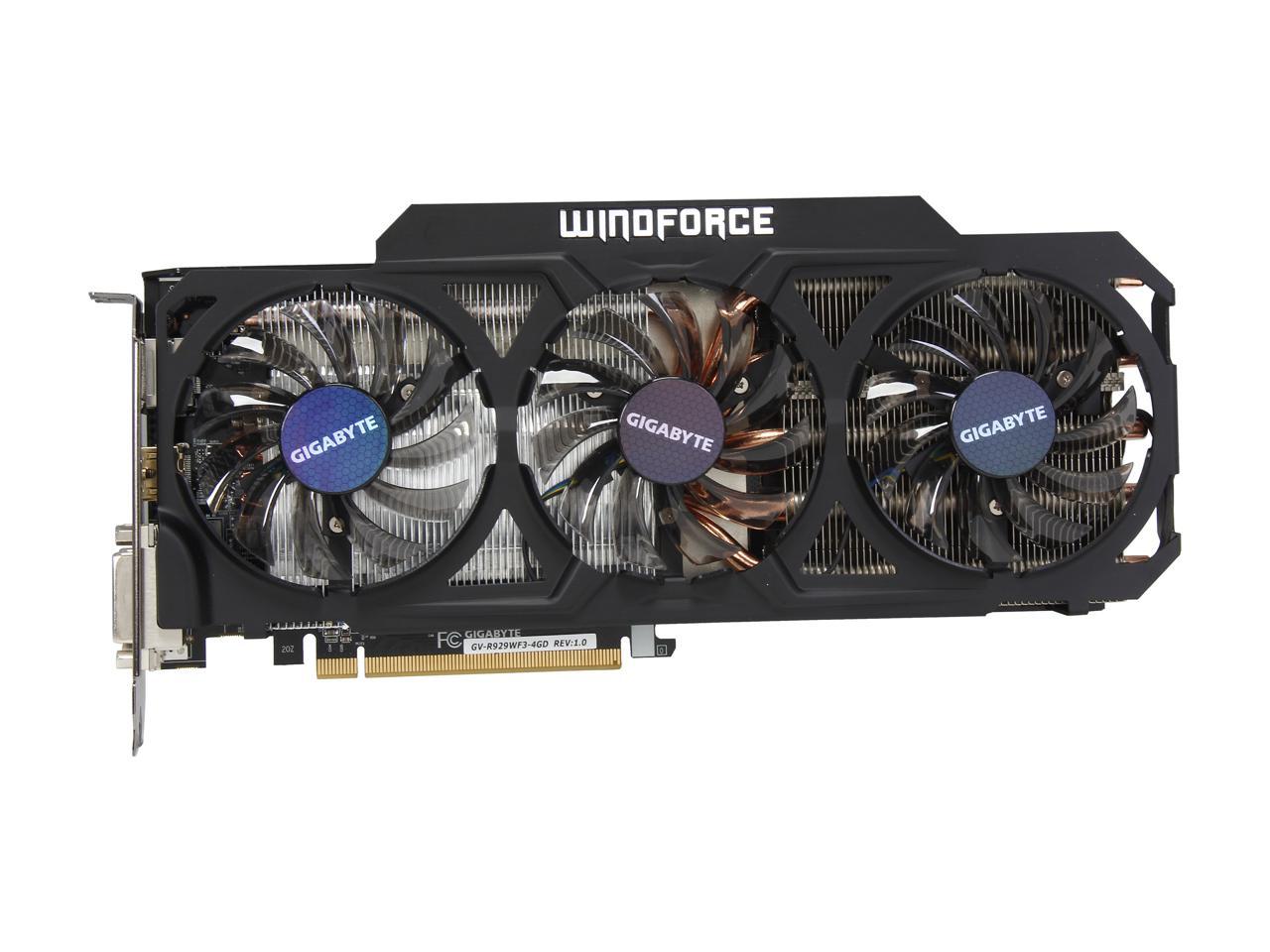 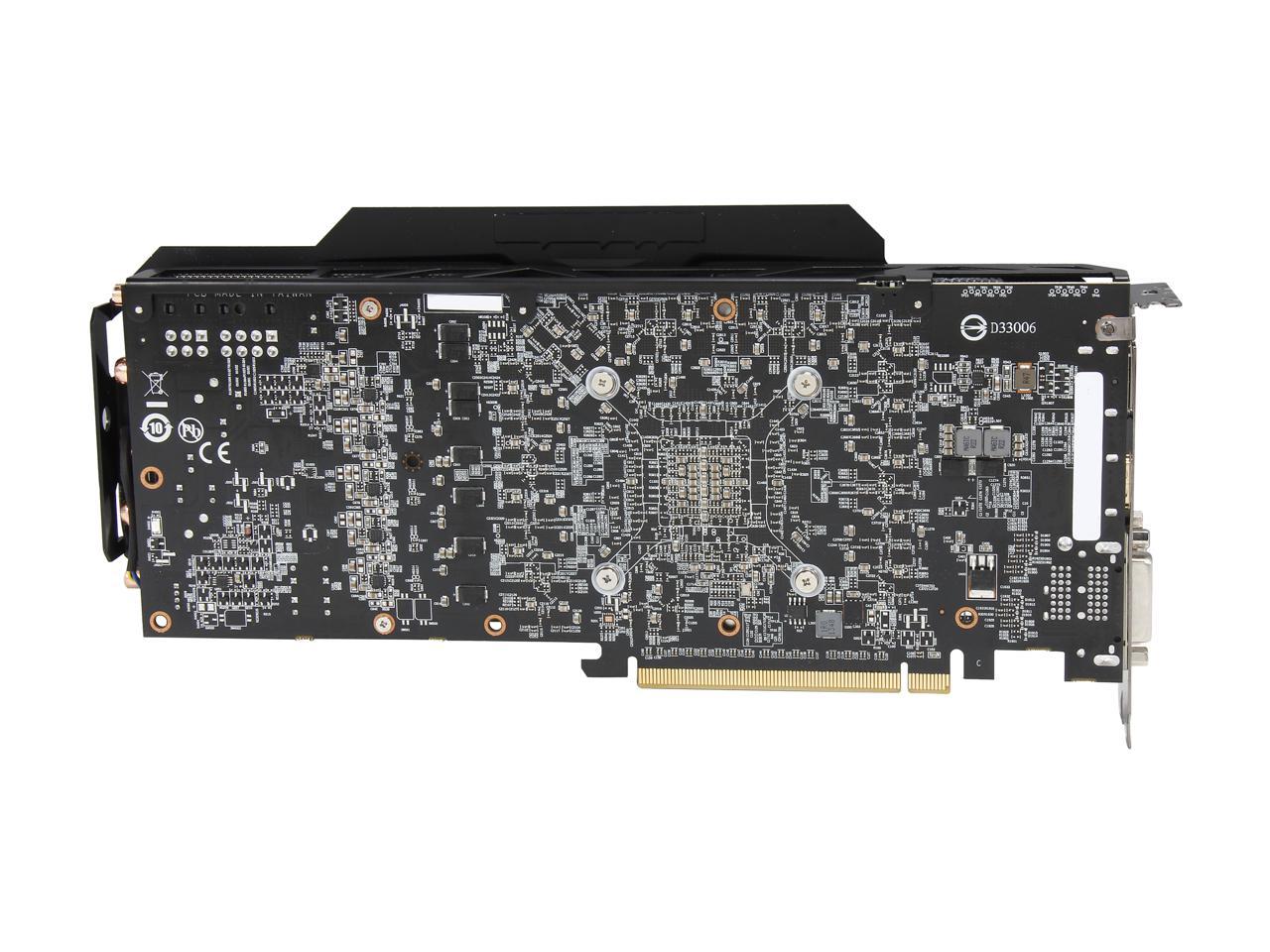 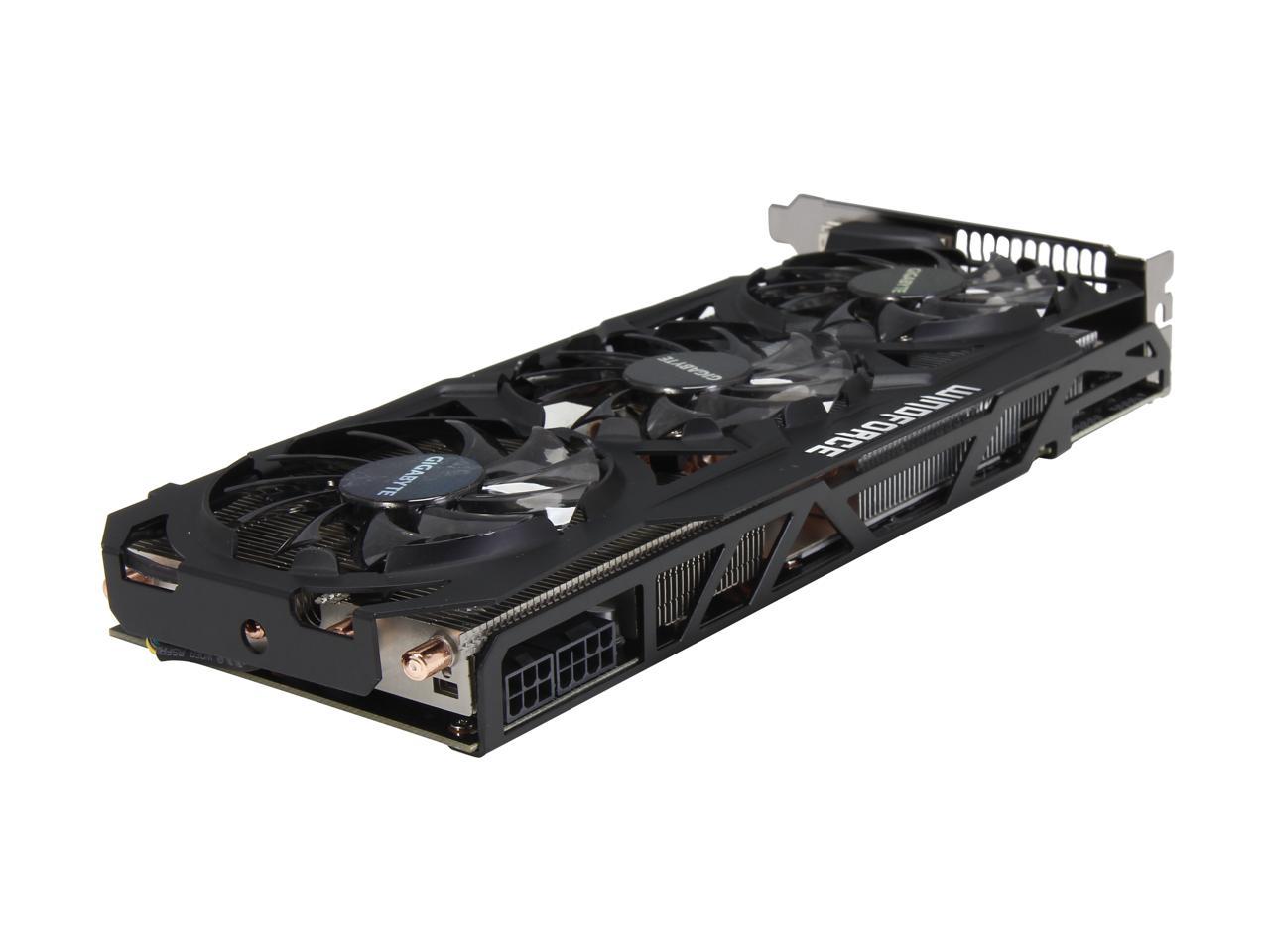 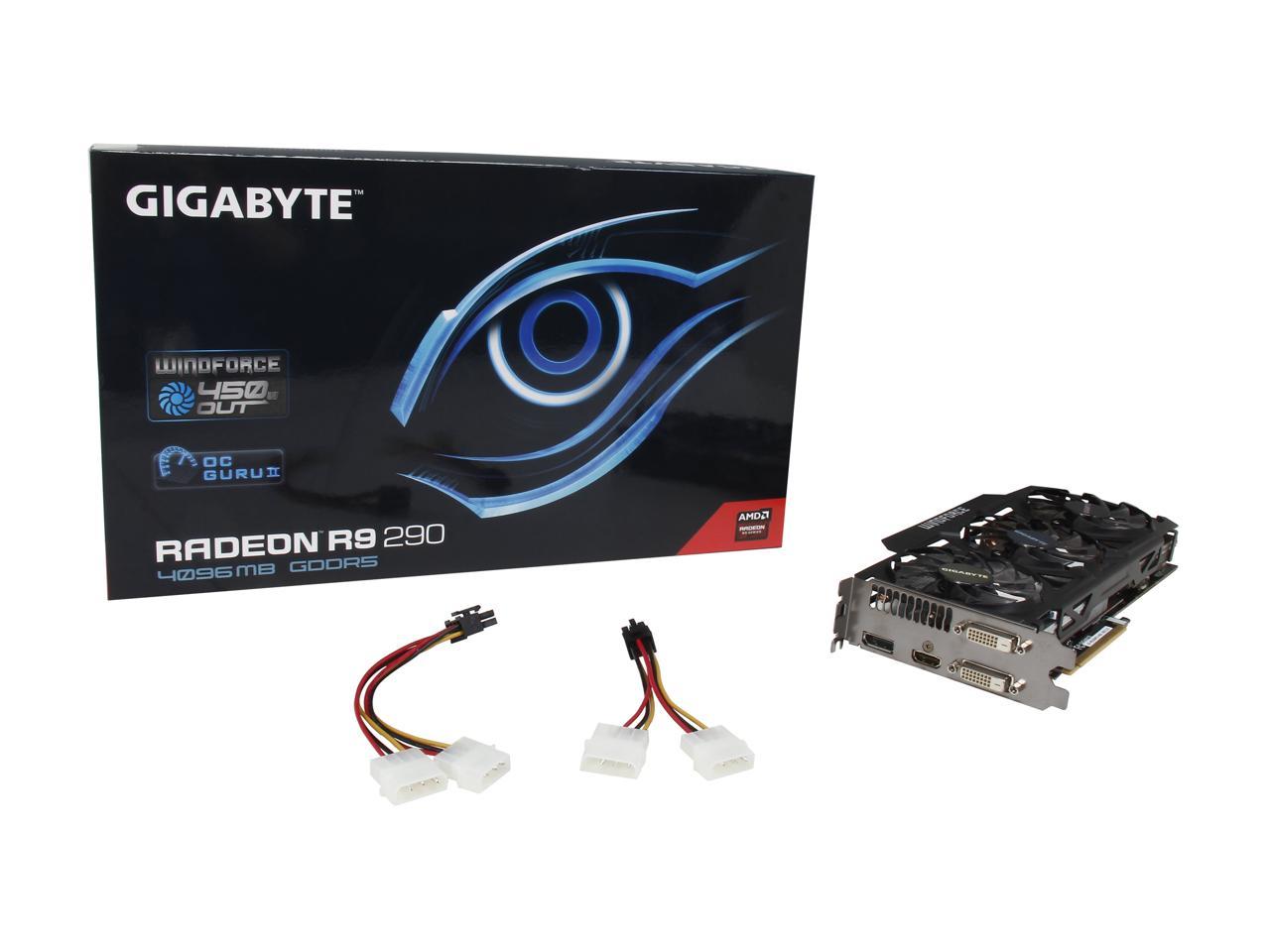 The Radeon R9 290, the AMD's new flagship GPU, offers the weapon of choice for gamers who demand the best. It's based on the new 28nm Hawaii GPU architecture and introduces the support for DirectX 11.2, capable of rendering reality-redefining imagery in the hottest titles. With massive number of atream processors and a gigantic 4GB GDDR5 memory, this GPU delivers the performance you need for smooth gameplay at extreme settings. The new CrossFire technology allows you to build a multiple graphics card configuration without the use of interconnect bridges. With Ultra Resolution Gaming you will leave HD in the dust by gaming on displays much, much larger. A rich set of AMD innovative technologies is included, such as App Acceleration, AMD PowerTune, AMD ZeroCore, and AMD HD3D technology. With these technology advancements, you'll get more than one way to elevate your gaming experience.

Learn more about the GIGABYTE GV-R929WF3-4GD

Pros: Good performance but some video tears etc... Didn't overclock much. You guys get this review tagged so it shows up. Flashing the Bios to GV-R929WF3-4GD FA2 changed all that. Over clock quite well Rock Solid stable. Note the FA2 in the BIOS title. Run GIGABYTE VGA @BIOS and you should see your BIOS ver, FA1 was my original BIOS Tag this review for the guys out there so this get's read. Game on.

Cons: non at the moment

Pros: Works great for a day. Makes a nice paper weight due to its weight

Cons: Died after 2 days of use, just black screens on desktop, currently RMA through manufacturer, tech support is a joke. Ugly to look at on top of all my papers.

Overall Review: I never will buy a Gigabyte again, thanks for taking all my money...

2 out of 2 people found this review helpful. Did you?
Manufacturer Response:
Dear Customer, Thank you for your comments. We apologize for your difficulty with your GIGABYTE product. Please contact us at newegg-support@gigabyteusa.com with the case number 119286 in the e-mail subject line. We will provide personalized service and analysis to help solve your issue ASAP. If the matter is urgent, please send us your contact number, and we will contact you. GIGABYTE VIP Support Team
Zach L.
Ownership: 1 month to 1 year
Verified Owner
Great card, poor software1/2/2015 2:49:34 AM

Pros: Amazingly fast, can run everything I through at it at the highest settings at 1080p. I bought this card on a black friday sale and was a little worried after reading reviews. However doing some research, I found out that the problems making the card crash and blue screen computers was due to the included software from Gigabyte. As long as you install the newest drivers from AMD and use their Overdrive software for overclocking instead of Gigabytes, you should be golden! Also I just want to say I was surprised when I found the shroud over this card was metal. Every card I've used to this date had a plastic shroud, so this made the card feel premium.

Overall Review: As long as you install the newest drivers and don't use the included overclocking software, this will be a great card for you! I have never had a problem with it in the month that I have had it, and I have pushed it hard playing games for 8+ hours over winter break. People buying it should know that while it runs hot, It never goes over 82 degrees for me at a 10% overclock. Usually resting around 70 in games like Battlefield and War Thunder, and Star Craft and Civ have it running even lower. Just a funny not is that my previous 7870 would max out around 55 degrees, and this card idles at that temp

Pros: Pretty much what everyone else says. Good when it works and there's no black screen.

Cons: I have used the Gigabyte @BIOS Flash in hopes of flashing a GPU ROM image of this card supplied by Gigabyte website, results were that it couldn't find my BIOS version! I'm running a rather older AMI BIOS too so my options are limited. The unit runs on 40 degrees and rather cool due to my 6 fan apparatus, using a 850W psu, and drivers are all up to date with Catalyst 14.12 Omega. Windows 7 and 64 bits, just about your standard gaming rig. Black screens are sporadic and inconsistent, usually ranging between 1-2 hours with just idle to average use. I am currently in the middle of an RMA with them and hoping that I was just really unlucky with a hardware issue.

Overall Review: Gigabyte, if you could personally give me a support ticket, I can send you an email and try to help you get more details about my issue... I work in IT myself and would be glad to work with you to get this issue squared away so I can focus less on debugging and more on playing some actual games!

Pros: After my $20 Mfg. rebate I got this card for $319.99 and I could not be any happier. The card is VERY powerful when paired with my 4770k @4.2ghz and plays BF4 on Ultra like butter. Thank you Newegg for a such great offer for a such great fine product.

Overall Review: Runs very cool at idle @ 38c but while playing BF4 on Ultra it can reach up to 80c which is still OKAY according to the Mfg. so all is well. No crashes and no artifacts. I like to set my fan speed to 100% while playing 3d games and OC to 1040 without any issues.

Pros: PRICE. Bought this at nearly 30% less cost than the lowest priced Nvidia GTX 780. Thanks to bitcoin crashing, and bringing price competition in the GPU market. The same performance if not better than a GTX 780. 4 Gigs of Ram rather than 3 Gigs compared to the GTX 780. ASIC score is at 83% Elpida. Easily OC'd to 1040.

Cons: @ the 1040 overclock Temperature. roughly 5-10c hotter than a GTX 780 (aftermarket cooler) Playing Crysis intro level: GPU temps hit up to 78c. vrm temp hit 88c Fans are louder than a 780, but it is tolerable with speakers. Should be no issue if you use headphones. With this OC, glad to know I did not hit the 95c. I can't imagine how people dealt with the reference cooler fan noise.

Overall Review: Went from GTX 780 to R9 290. Was worried to make the step from all the bad reviews, but the price was too tempting. Have no issues so far. Will update if I run into black screen issue like I've read from many other 290 reviews. Overall, glad I switched from the 780 to this.

Cons: When i got it i threw some games at it and and noticed very low frame rates, i opened some software and found out that the card would not ramp up past MHz. I attempted to contact gigabyte but no response. I waited over a week an still nothing.

Overall Review: I am very disappointed with gigabyte, i expect more from them.

1 out of 1 people found this review helpful. Did you?
Manufacturer Response:
Dear Customer, Thank you for your comments. We apologize for your difficulty with your GIGABYTE product. Please contact us at newegg-support@gigabyteusa.com with the case number 120056 in the e-mail subject line. We will provide personalized service and analysis to help solve your issue ASAP. If the matter is urgent, please send us your contact number, and we will contact you. GIGABYTE VIP Support Team
James C.
Ownership: 1 week to 1 month
Verified Owner
Dual Digital Output not working2/9/2015 9:10:43 AM

Pros: The card plays most of my games on max settings with minimal tearing. Unlike some reviews, my card stays fairly cool under load.

Cons: I have been trying for about a week the get digital output to work without success. My Primary monitor uses the HDMI port on the card. My secondary monitor uses DVI-D. Post-boot, both monitors seem to work (although the display is cloned.) However, after windows boots, my computer cannot detect the secondary monitor. I have changed my bios to make the card my primary GPU and disabled the onboard graphics in hopes of resolving the issue that way. No avail. Catalyst doesnt detect another display either. It seems like this card is only capible of pushing 1 digital display line at a time and if that is the case, this is a no-go for any multi-monitor enthusiast.

Overall Review: For a 300 dollar card, I would have expected better functionality.

1 out of 1 people found this review helpful. Did you?
Manufacturer Response:
Dear Customer, Thank you for your comments. We apologize for your difficulty with your GIGABYTE product. Please contact us at newegg-support@gigabyteusa.com with the case number 119117 in the e-mail subject line. We will provide personalized service and analysis to help solve your issue ASAP. If the matter is urgent, please send us your contact number, and we will contact you. GIGABYTE VIP Support Team