Sold and shipped by:

Top Rated
1,554 Ratings (95% Positive)
This badge confirms that this seller has high ratings based on customer satisfaction and on-time delivery. See More
Sold and shipped by: 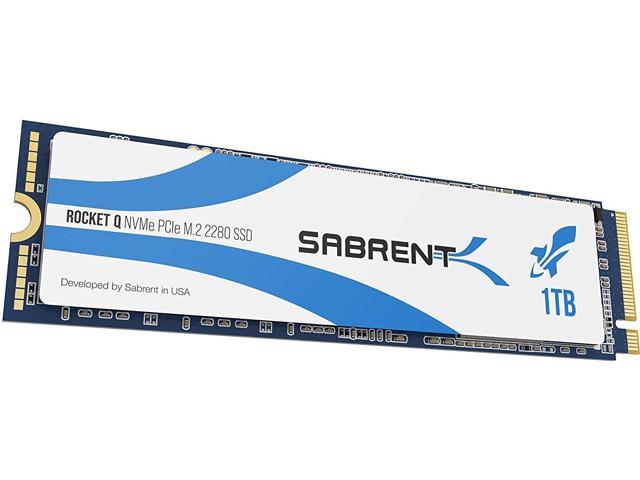 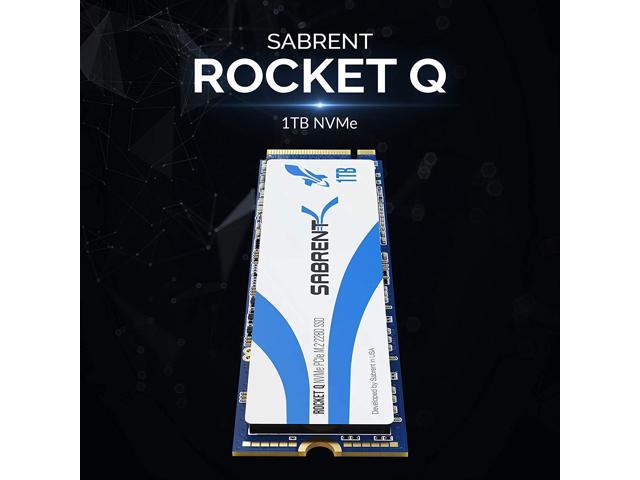 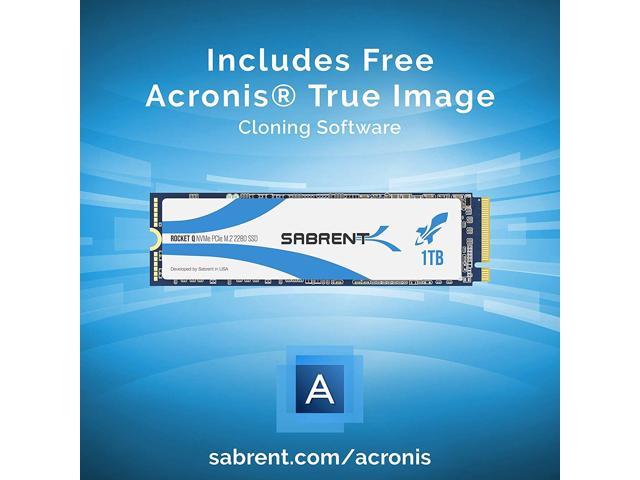 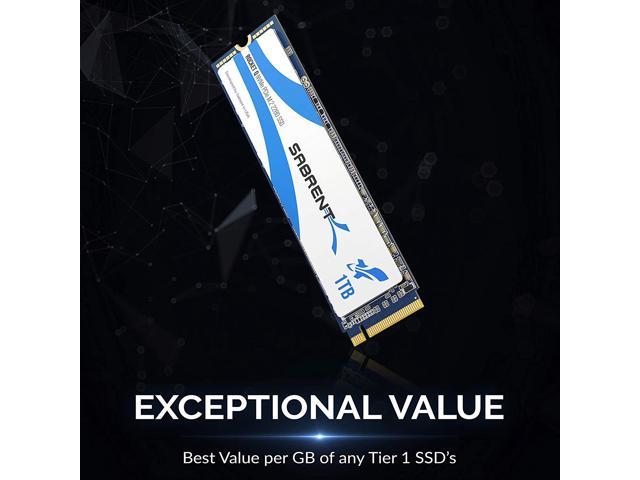 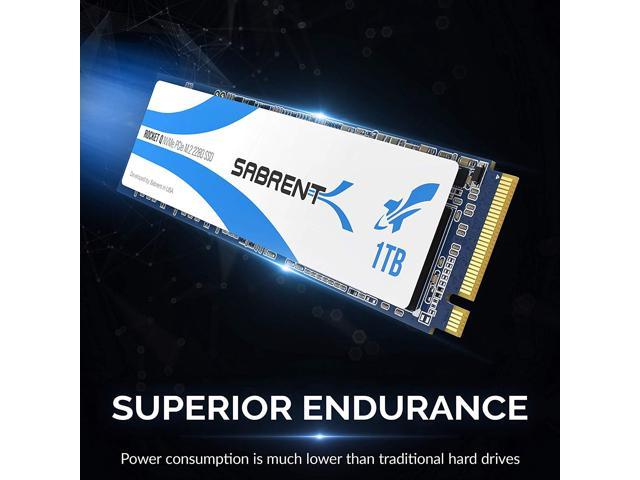 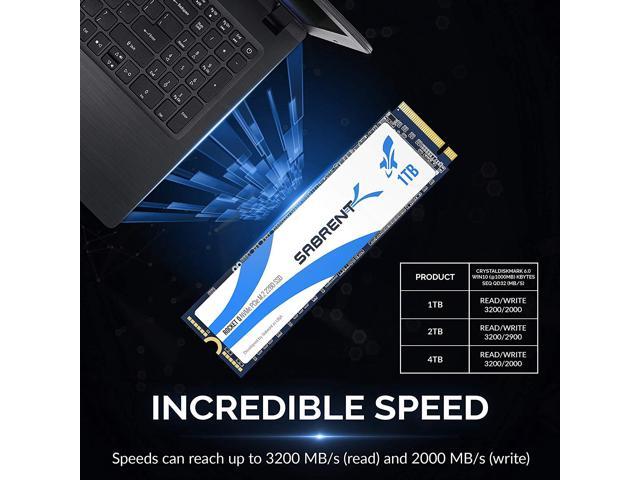 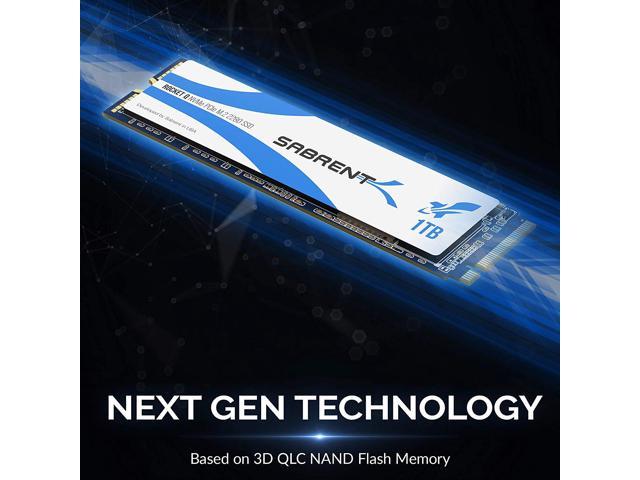 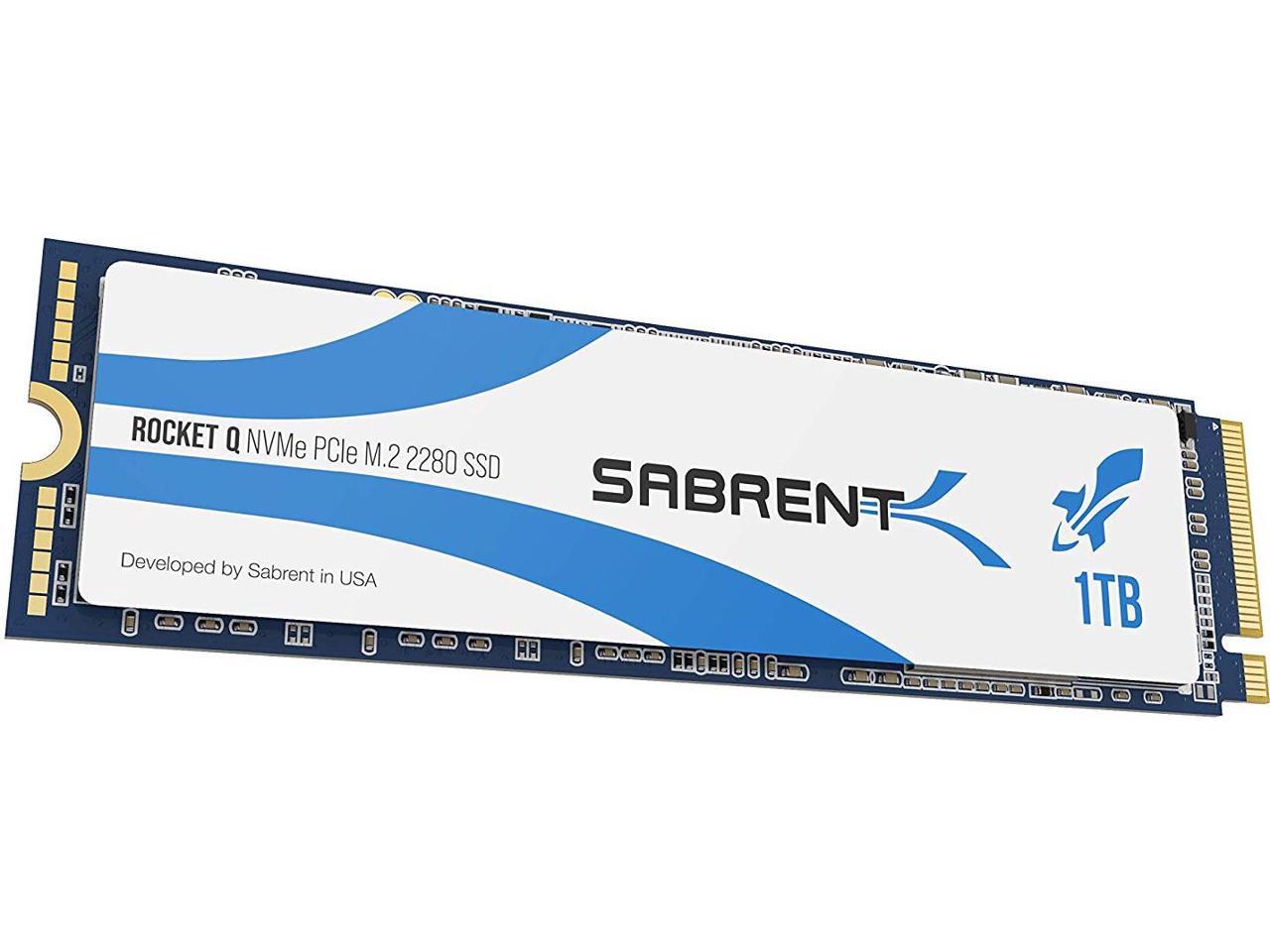 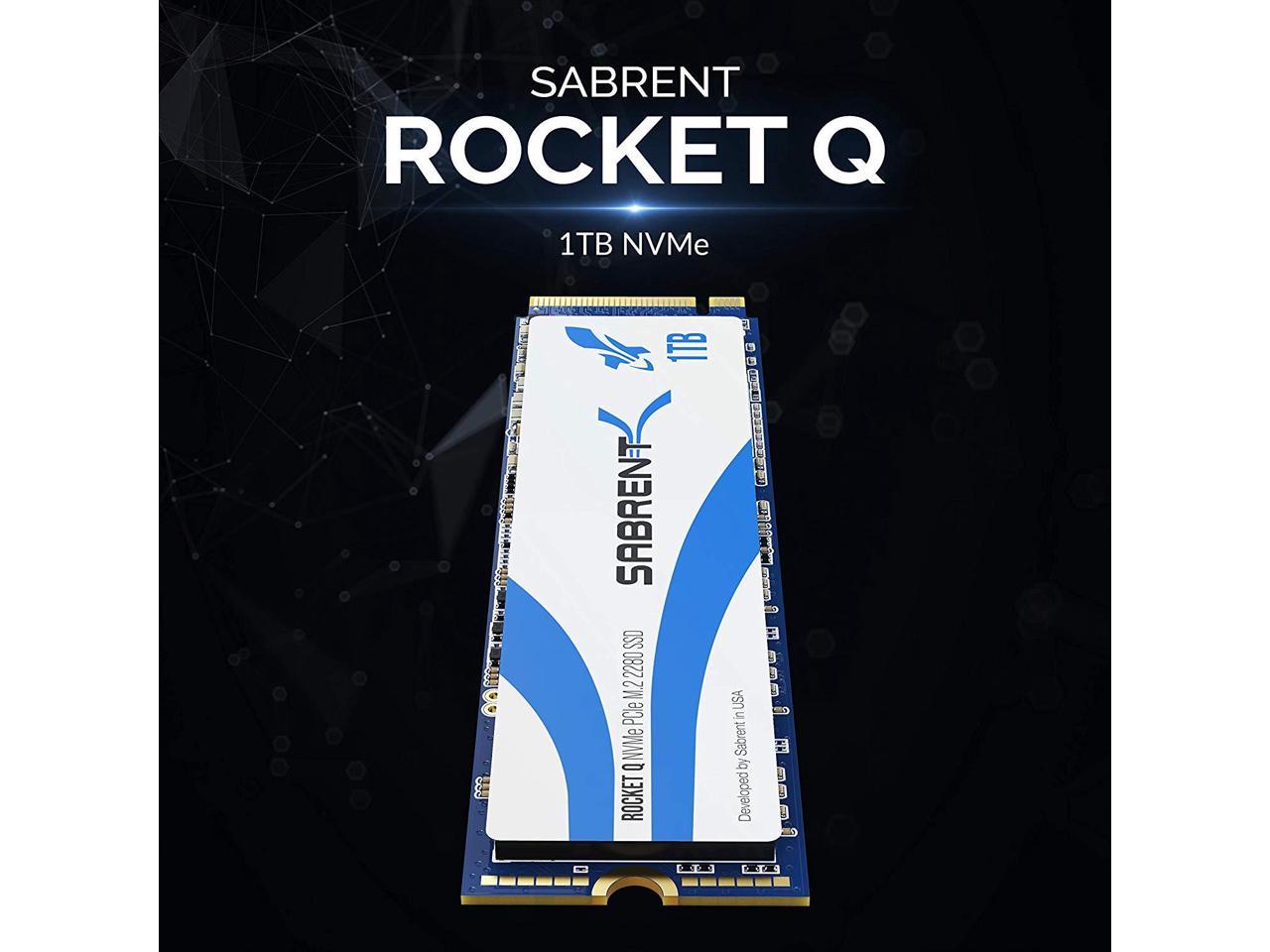 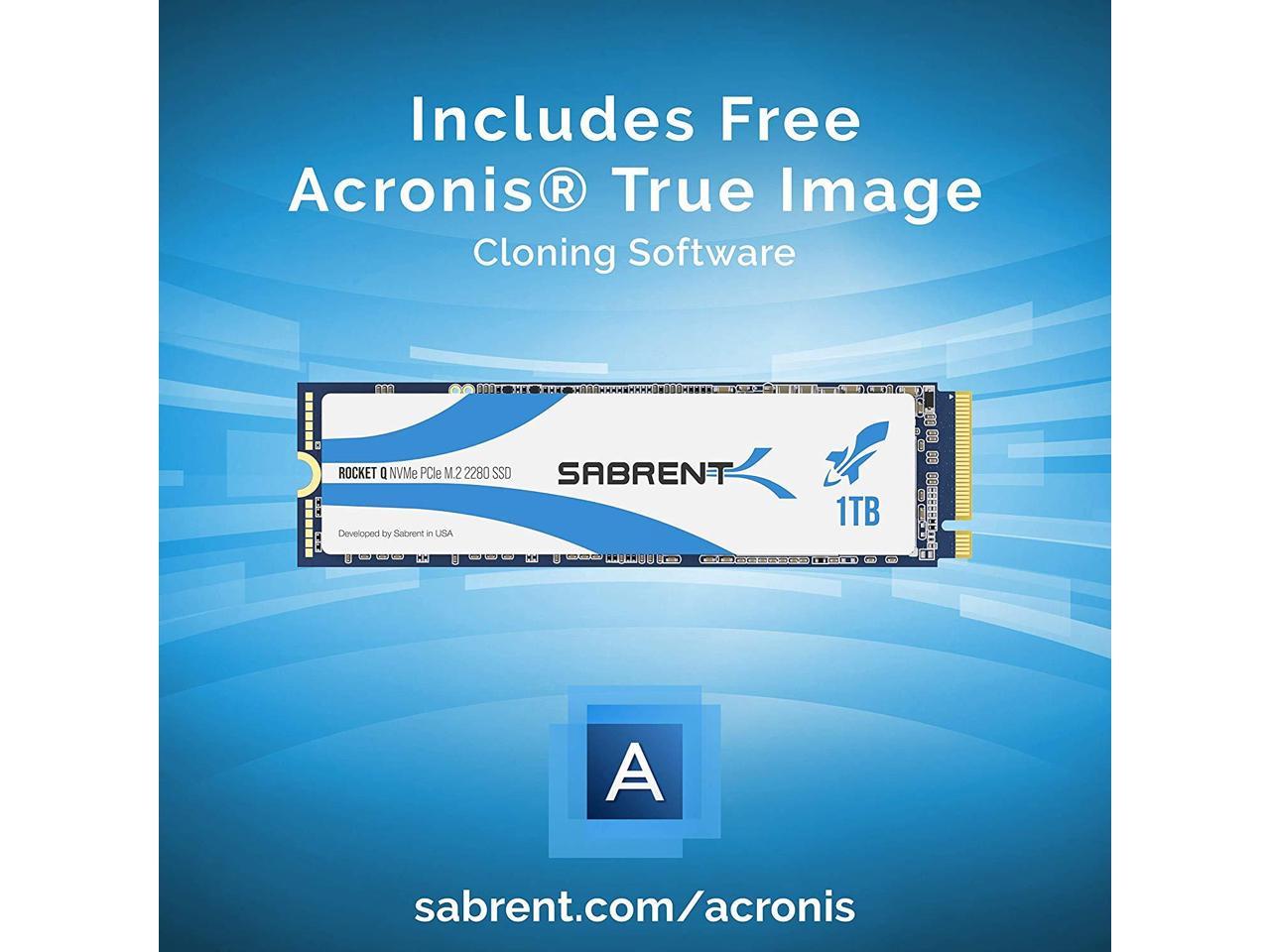 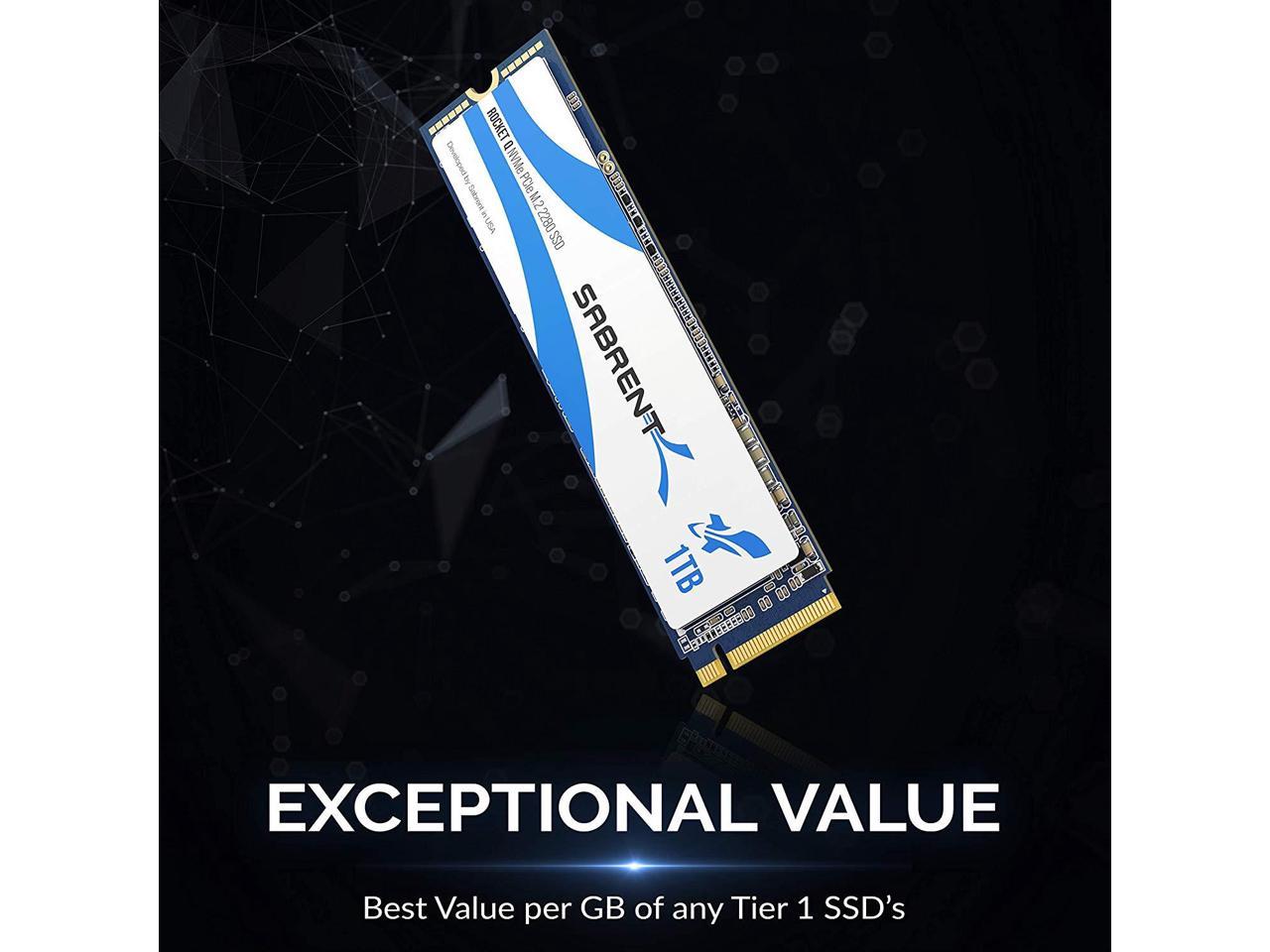 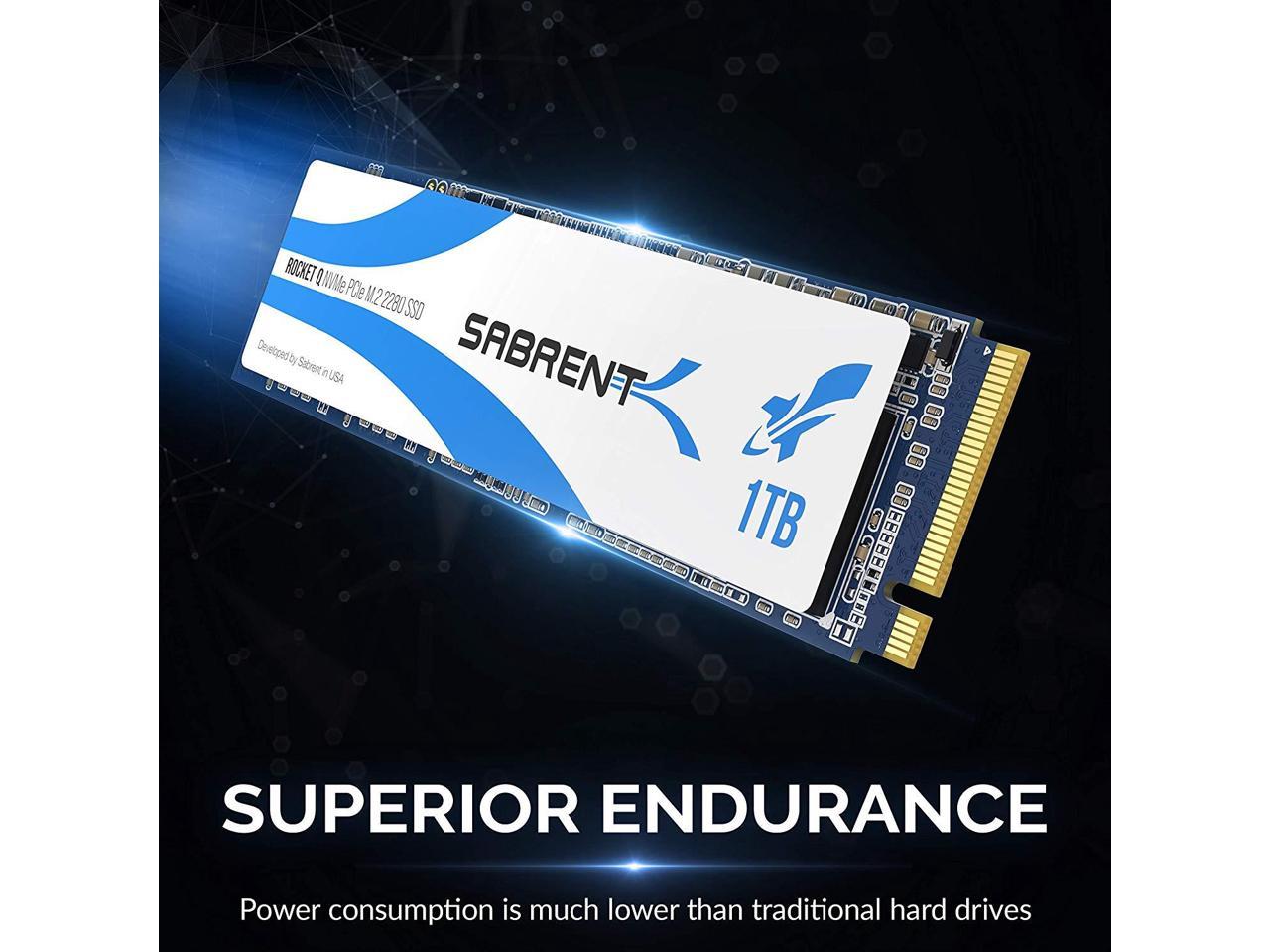 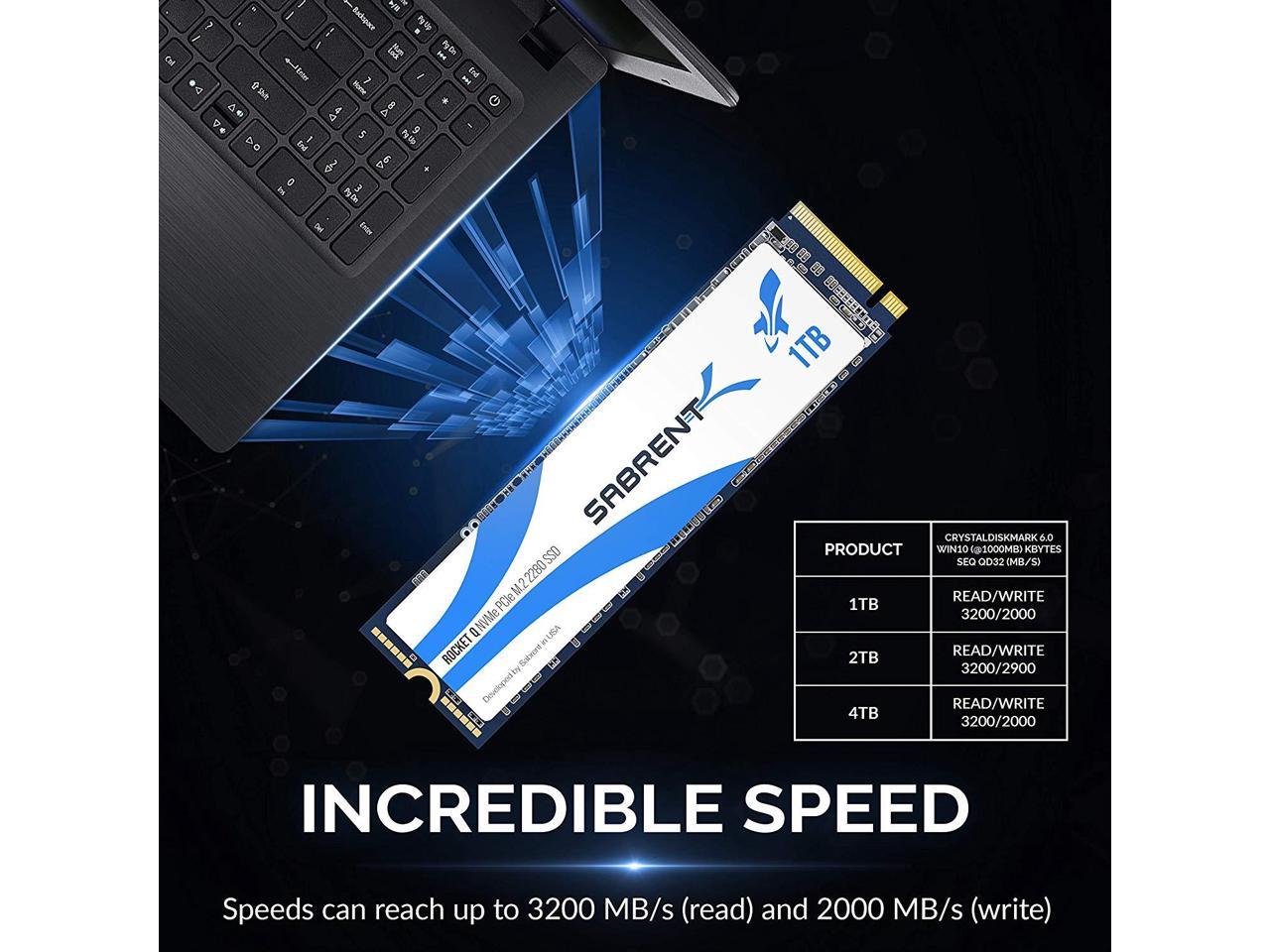 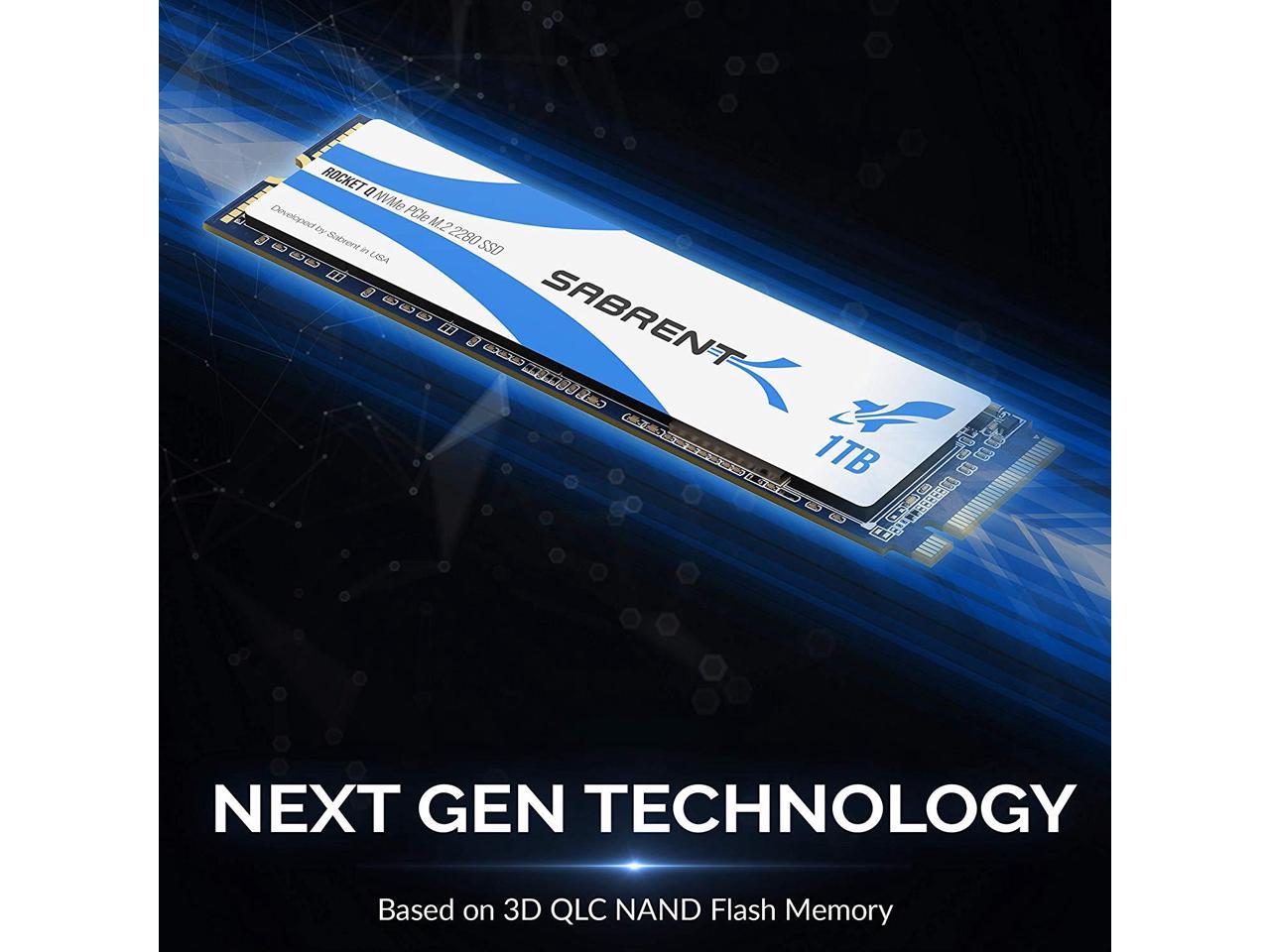 Power consumption is much lower than traditional hard drives, making it the best-embedded solution for new systems.

Features:
What's in the box?

Learn more about the Sabrent SB-RKTQ-1TB

Pros: Fast Price 5 year warranty if you register it with Sabrent.

Cons: Sabrent's web pages are convoluted and very difficult to find information, including TBW lifespan. TINY letters used in manual and for the serial number on the back of the drive.

Overall Review: Make certain to look at the back of the drive and record the serial number before install, you will need it to register the drive. After installing the drive I entered BIOS to make certain the drive showed up, it did. After entering Windows 10 I opened Computer Management, Disk Management and formatted the drive I ran CrystalDiskMark7 x64 and the drive yielded the following performance [Seq block size 1 MiB, Ran Block Size 4 KiB]: Seq Q8T1: Read 3429, Write 3057 Seq Q1T1: Read 1776, Write 2232 Ran Q8T8: Read 1256, Write 1928 Ran Q1T1: Read 34, Write 160 I used the above because normal desktop uses seldom goes beyond Q8, including gaming. Compared to my 1TB Samsung 970 EVO this Sabrent drive was a little slower with reads except Random Q1T1 where it was a little faster and faster in writes except a little slower in Sequential Q1T1. When comparing numbers drive size matters and larger drives are faster than smaller ones, however those read & write numbers for this Sabrent drive are good for a 2TB drive at this price. My motherboard is a Gigabyte Z390 Aorus Master, CPU is an Intel i9 9900KS.

Cons: None at this time, Lets see how it preforms in 6months. This might be a problem for some people - No Screws.

Pros: Highest capacity available for consumer SSDs (only one other consumer SSD is this large and it's 2.5"). Longest warranty for this size consumer SSD. Physically more durable than HDDs, More compact than 2.5" SSDs or HDDs.

Overall Review: I've had this drive installed and operating for only a few days so these are mostly first impressions. I was dismayed when I first received the SSD in a cheap, folded up bubble wrap envelope until I saw the package inside the envelope. Nothing there was especially remarkable until one opens the box and removes what is inside. Inside was a very sturdy, deep drawn, aluminum box about the size of a 2.5" SSD, except it's 13mm thick, with fairly dense removable foam padding to protect the SSD inside (the picture of the open box doesn't contain the SSD since the SSD is installed in my laptop). One could drive a car over this box and not damage the SSD inside (or the box). The SSD itself uses QLC NAND. Since more data is stored per cell, the SSD will have a shorter write life than TLC and MLC SSDs. Also, since each cell is more crowded, data leakage will start happening sooner than with TLC and MLC NAND. However, the TBW rating is still high enough that most people will never come close to exceeding the the TBW rating or experience data leakage during the five year warranty period. The warranty is one year when first purchased but can be upgraded for no charge to five years if the SSD is registered within 90 days of the purchase date. Registering also allows you to upload a copy of the receipt to be kept on file should you lose your copy, which is needed should you need to file a warranty claim. Despite the higher speed of NVMe drives over SATA, I do not recommend this drive for a boot drive unless your computer has room for only one drive and you also need the extraordinary capacity this drive offers. It's better suited for static data storage that is infrequently written but frequently read. I recommend this drive for compact, high capacity, relatively static data storage installed inside a computer. It would not be suitable for use as an external drive unless the drive was powered up frequently and mostly read rather than written to. I chose this drive over the only other 8TB SSD I'm aware of (a 2.5" model), despite being QLC, for it's longer warranty, large capacity, and because it allowed me to keep one of the 2.5" bays in my laptop free for another purpose. Once data has been written to the drive, it will be mostly read only with the only writes being when occasionally adding new data. Since the drive will be powered up frequently and have few writes, it should outlast the warranty without loss of data. My laptop is running on Linux Mint 19.3 booted from an MLC NVMe drive. I have a 4TB 2.5" MLC SSD for data frequently accessed, written, edited, and deleted. TRIM works on this drive. I'm currently populating the drive with data from two 4TB SSDs. To allow me to use my current 4TB SSD backup drives, I partitioned the drive into two equal sized partitions. It took around 18 hours to populate one partition with 3.225TB of data. Transfer speed from a 2.5" 4TB MLC SSD was throttled by SATA interface of the source drive so there was no speed advantage to be gained by the NVMe drive for me. Even when being read inside the computer, there will be no noticeable speed advantage unless working with enormous files (say 50GB-100GB or more), which I will not be doing. Drive temperature during population never exceeded 35°C with a 25.5° ambient temperature and no heat sink on the SSD. Normally, one wants to maintain 20-25% free space on an SSD to help ensure minimal fragmentation (yes, SSDs fragment but that will be kept to a level an SSD can easily handle as long as TRIM is enabled and there is plenty of free space on the drive). Generally, the more often a drive will be written to, the greater amount of free space one wants to maintain. Since my drive will be mostly read only, I can get away with maintaining the lower limit of free space. The one partition I have fully populated is only 80.6% full so there is plenty of free space there. The partition I'm currently populating will not reach maximum usable capacity for quite some time (it will be less than 60% full when I finish copying data from its source drive). Even though I'm copying data from the source drive to the remaining partition on the Sabrent in fairly small batches to avoid overflowing the cache, I'm seeing a noticeable slowdown in write speed. For my use, this won't be a problem because future writes will usually be under 10GB (very occasionally, up to 25GB) and will be one time events, the data then being read only after being written. Update: It's been almost 3 months months since I bought this drive and it is still running just fine. It's still more than fast enough for streaming movies from it.

Pros: - blazing fast load speeds i can now load all my games faster than my old hdd

Pros: + Reasonable Price for SSD in General +Fastest Read and Write Speed for an M.2 SSD

Overall Review: I'd absolutely recommend this SSD IF your PC has a built in M.2 heatsink. A lot of motherboard do have M.2 heatsinks so it would be great for a desktop. If you are going to put this component into a laptop, I strongly advise against it. It will drain your battery and heat it up. I have purchased 3 of these at 500gb, 1tb and this 2tb model, they all run just as hot.

Pros: I noticed a rather significant performance boost with the regular Rocket vs the Q. Also when cache fills it slows down much more. Although the stated read and write speed are very similar, once the cache fills the faster better made Rocket 2TB is much faster in larger file transfers. The 5 year warranty of the other drive make this drive questionable. Always register with Sabrent.

Overall Review: I noticed a rather significant performance boost with the regular Rocket vs the Q. Also when cache fills it slows down much more. Although the stated read and write speed are very similar, once the cache fills the faster better made Rocket 2TB is much faster in larger file transfers. The 5 year warranty of the other drive make this drive questionable. Always register with Sabrent.

Pros: Easy to install. Easy to clone to, faster than my Samsung EVO 850

Cons: Computer wouldn't boot with both the Samsung SSD and the this installed. The first clone attempt failed. Windows had to be reactivated for some reason. So, I ended up cloning the EVO to my WD 2 TB hybrid data drive and cloning that to get things to work

Overall Review: Incompatibilities with some SSD drives make it problematic, even though it's a welcome upgrade to my B450 Tomahawk board. In addition to the above, for some reason the MSI board set the hybrid drive to override the boot sequence, so it was booting instead of the Sabrent drive. I ended up unplugging my WD drive and booting. That cleared out the override. Instead of logging into Windows, I shutdown the PC and reconnected the data drive and no problems since.

Pros: Fast, 6 times faster than my old SSD drive. what else do you need that speed and storage space?

Cons: I haven't found any yet.

Overall Review: I usually don't write reviews but I was so impressed how simple it was to set up and copy my old drive. I was skeptical at first when I saw some of the negative reviews but the instructions was very straight forward and to download and copy my old was a breeze. I did it all in 40 mins, I highly recommend