By Gregory RiceOctober 7, 2019No Comments 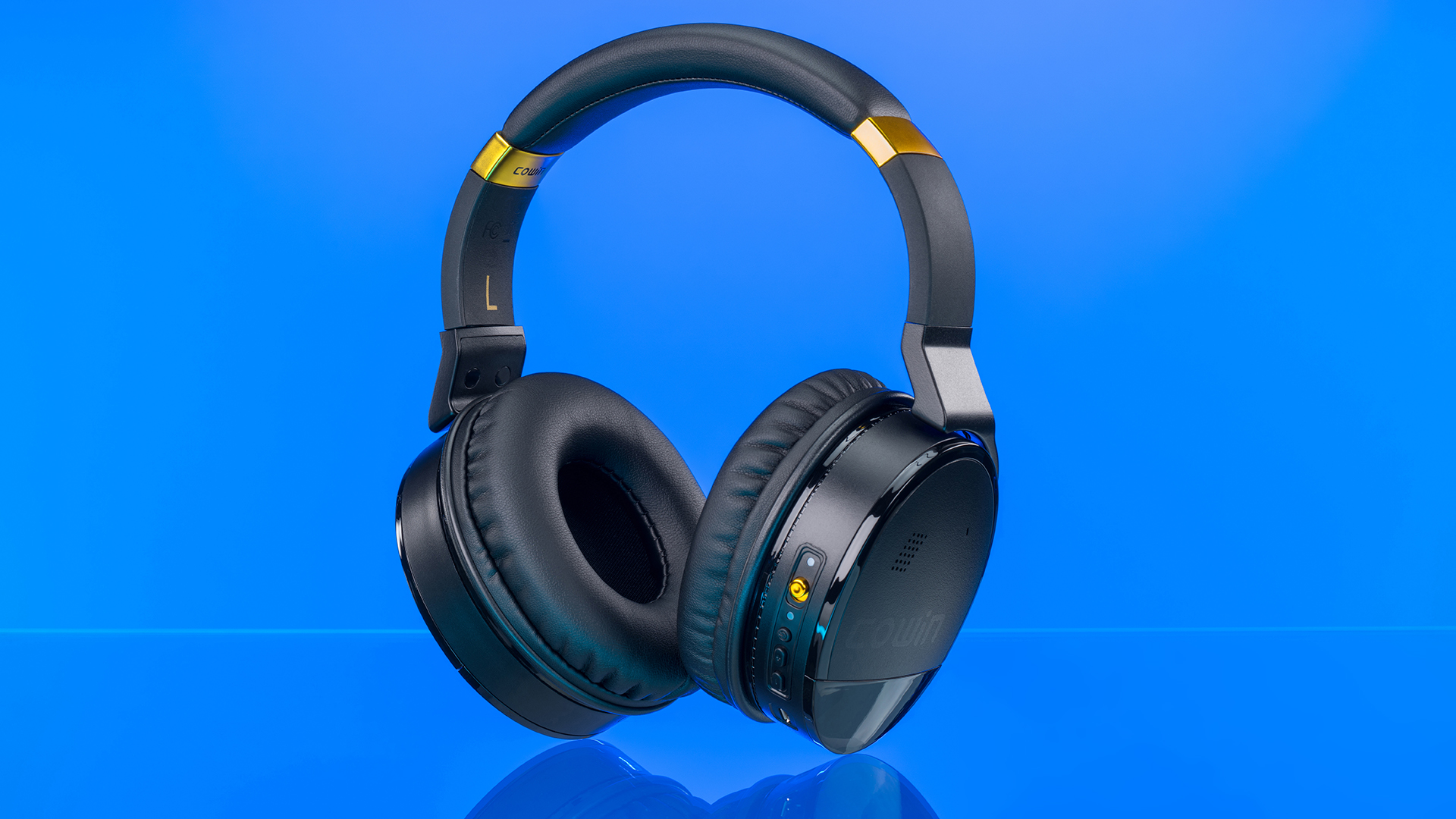 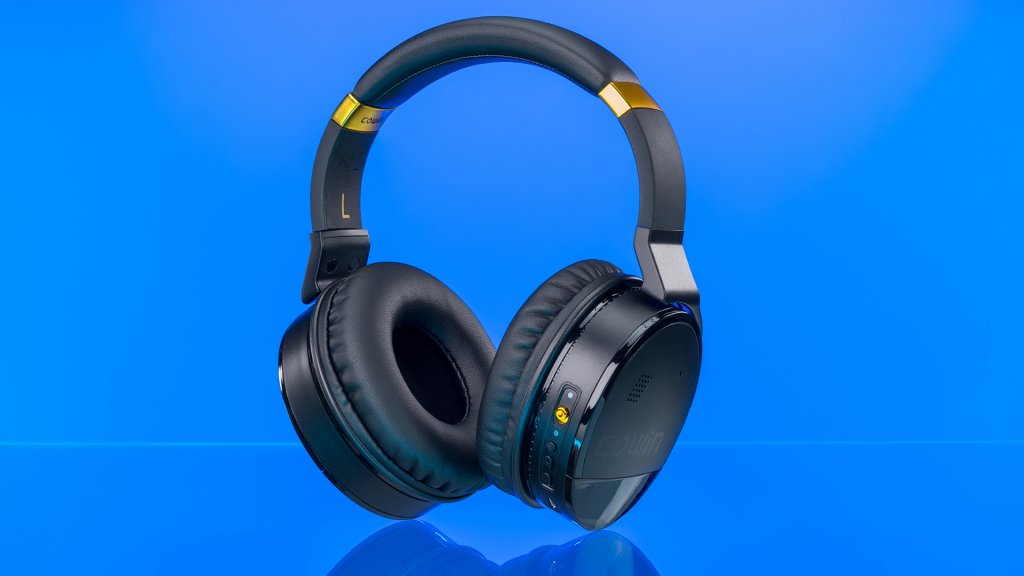 As contradictory as it sounds, time and time again I’ve found it far easier to be blown away by an up-and-coming brand over a frontrunner. Far too often it’s hard for brands to live up to the glory they set with their first go-around that secured their success, and the same old tricks just won’t work to “wow” fans. Thankfully, after spending some time with the Cowin E8 Active Noise Cancelling wireless headphones I can say that this is not the case, and the successful lessons learned with the wildly popular E7 predecessor were used as a springboard for continued growth in the Bluetooth headphone space.

When it comes to stiff competition, there may be no vertical more competitive than that of wireless headphones, and Cowin has managed to successfully carve out a niche for actually quality wireless headphones at an affordable price: a unicorn in today’s world.

What put Cowin on the radar of many people was their E7 Active Noise Cancelling wireless headphones, which have been raved about for their solid performance in the sub-$100 space. One of the initial hurdles the E7s had to overcome with their entry into the market was proving their ANC (Active Noise Cancellation) was a functioning feature, unlike many of the cheap headphones that just use “noise canceling” as a description of the large ear cup design. While the ANC on the E7s did in fact prove to do a good job of reducing ambient noise, one of the common quibbles was that when engaged it made the audio flatter and reduced the highs.

Apart from that, overall the E7s made a huge positive impact on those who scooped up a pair, and for roughly $60 getting a pair of 40mm drivers tucked behind plush over-the-ear cushions with NFC and Active Noise Cancellation makes for a very hard act to follow. But that didn’t stop Cowin from putting out their E7 Pro, which enlarged the driver size and received an equally warm fan reception. Now with their 3rd iteration of the E-series headphones, the expectation has been set for another stellar performance. 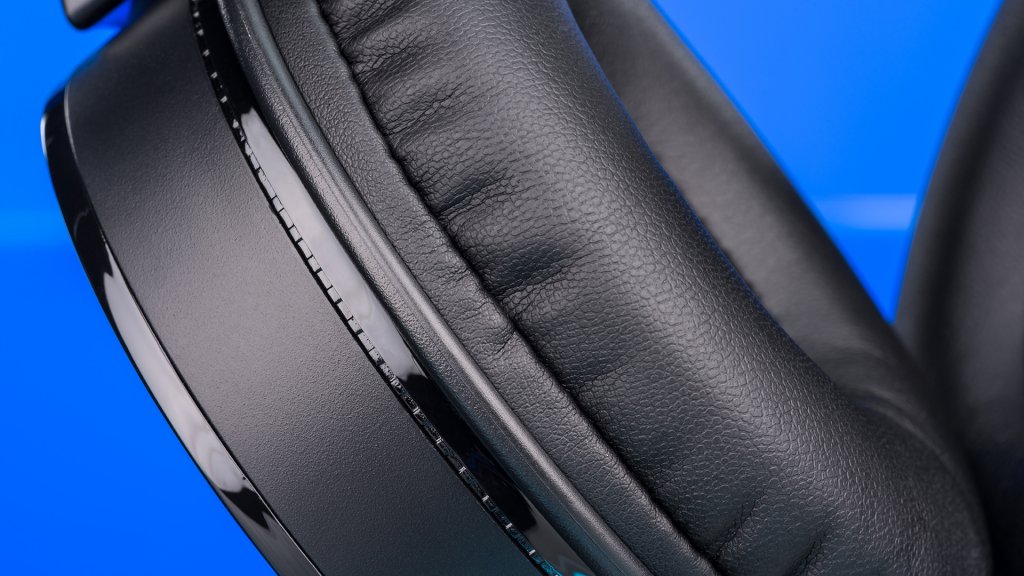 While the previous models also use an over-the-ear design, depending on the size of your ears they wouldn’t entirely swallow up your ear, and the cup was not nearly as large as it looked in pictures online. The E8s are a slight bit larger, and actually have more of an oblong shape that seems to more accurately mimic the natural shape of an ear.

One of the immediate standout features from the headphones is the plush pleather padding on the ear cups and headband, which is generous and very comfortable. The design of the headphones themselves uses more of a matte finish than the previous models, which I definitely find more attractive than the piano black sheen. Another minor detail is the finish, which has a texture to it on all but the bottom quarter of the ear cups and around the edges. While helping to reduce the surfaces that are shiny, this also makes the wireless headphones far less susceptible to fingerprints and smudges, which I’m definitely in favor of.

Another change for the new model is the location of the controls, which have been shifted back to the rear of the right ear as opposed to the bottom on the E7. Within those controls the same functions exist: power on/off, volume (which also functions to skip tracks), and a switch between Bluetooth and Active Noice Cancellation. In the same neighborhood as the controls there is also the Micro USB port for charging and the 3.5mm AUX jack for wired listening. 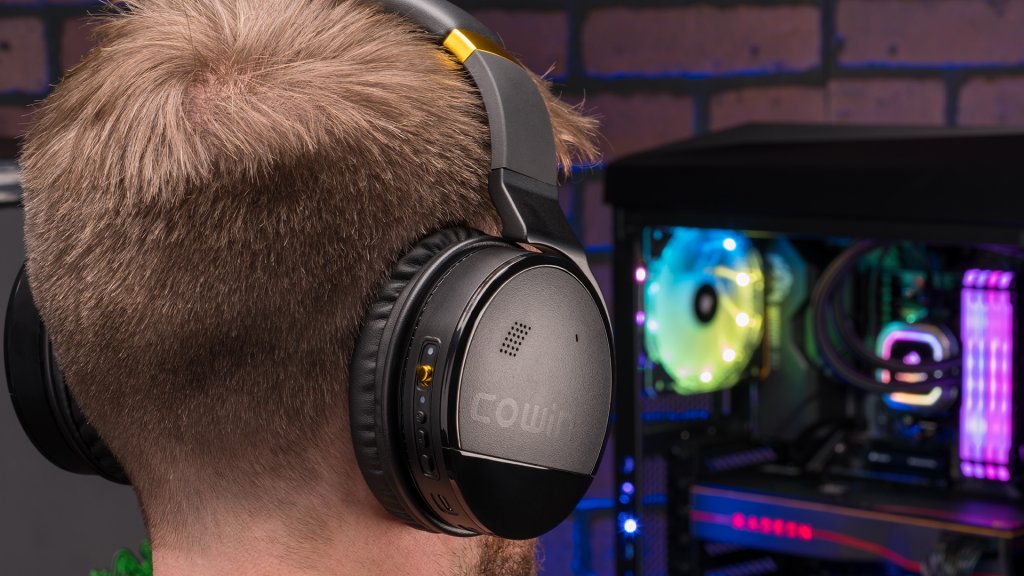 The plus and minus buttons on the right earcup let you adjust volume and skip tracks, as one would expect. Both of these functions were easy to use once I got used to the positioning of the buttons, though bizarrely the plus button skips tracks backward while the minus button skips forward. Save for that bit of counterintuitive design that seems to also carry over from the earlier model, I was happy to have these functions within reach and the physical buttons are nice over just touchpads.

I found the E8s to be very comfortable. I wore them through most of the workday and never felt like they were clamping down too hard on my ears. The cups are soft and fit nicely over my ears, which some would say lean to the larger side. Also, breathability was mercifully maintained without accumulating heat after hours of listening. I don’t know how they would perform in a more active situation like on a jog or during a gym workout, but that is another discussion altogether and I personally don’t care for complete ear coverage in those scenarios.

One aspect of the E8s that irked me was a tone that played every time I adjusted the volume or skipped tracks. While it was just a simple beep, my issue is that there was no way I could find to turn it off. Worse yet, the beep plays even when tracks change on their own. That means if you’re listening to an album or playlist that you can expect a small beep between each track even if you don’t press any buttons yourself. To album purists like me, this is a bit of an audio sin, as it can break up the flow between tracks.

One of the surprising features of the Cowin E8s is the wireless range. Most Bluetooth wireless headphones have a range limited to roughly 33 meters (~108ft) line of sight, however the E8s were upwards of 180ft without obstructions. Granted, in most cases there would be at least some obstructions between your Bluetooth sources and the wireless headphones, but that distance is far greater than I would have expected.

The E8s come with a 545mAh battery, which can be powered via the included Micro USB cable when listening as wireless headphones. Cowin quotes a battery life of 20 hours with Bluetooth on and noise cancellation off, or 10 hours when both are turned on with a two or three-hour charge time. Based on my tests, I can say that they hold up to those run times quite well, which makes them solid traveling headphones for a long flight or working in noisy environments for quite a long time. Speaking of travel, one nice little inclusion in the E8 package was an airline headphone adapter which means that instead of paying for the cheap airline headphones you can use a much higher-quality set for watching movies. 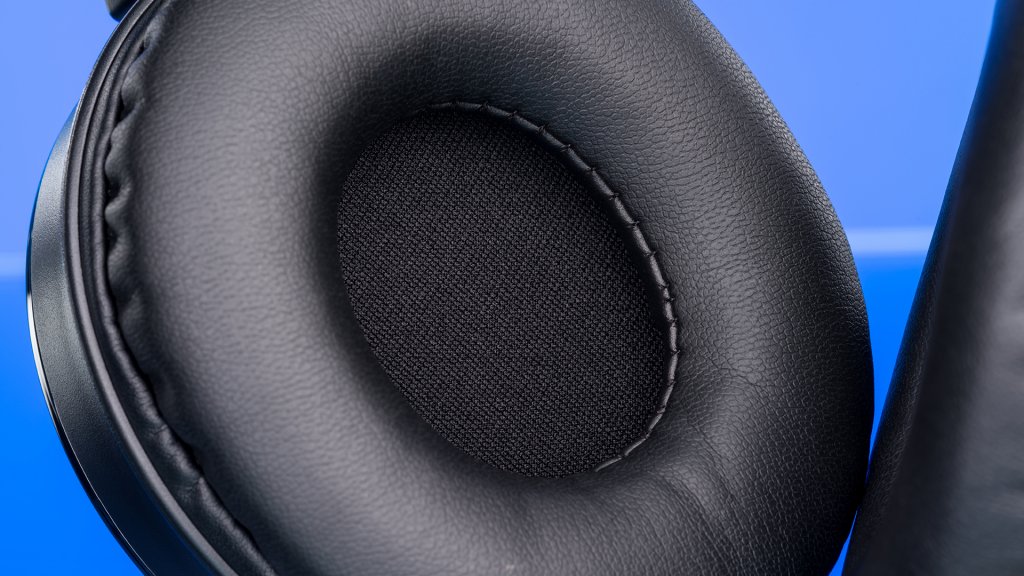 Cowin’s E8 headphones sound great —  just don’t go in expecting audiophile-grade sound. But you’re getting really high-quality sound for a reasonable price. At roughly $150 they are considerably more expensive than the E7 and E7 Pro predecessors, however Cowin has upgraded some of the hardware in addition to a more refined exterior to account for that price.

The drivers have been upgraded and are now 45mm large-aperture, which increases the power output to 100dB (25% stronger than E7). When it comes to the individual sound elements, the E8 has strong bass that is substantial for those really thumpy tracks, but it is at times is a bit overpowering that can come across as a touch muddy at times.

In the mid-range the E8s are well-balanced, however at time the treble can come through a bit sharp. When listening to tracks heavy in vocals there were times when it wasn’t as stellar on the higher end, however for the bulk of the spectrum it was quite pleasant and overall good sound quality. 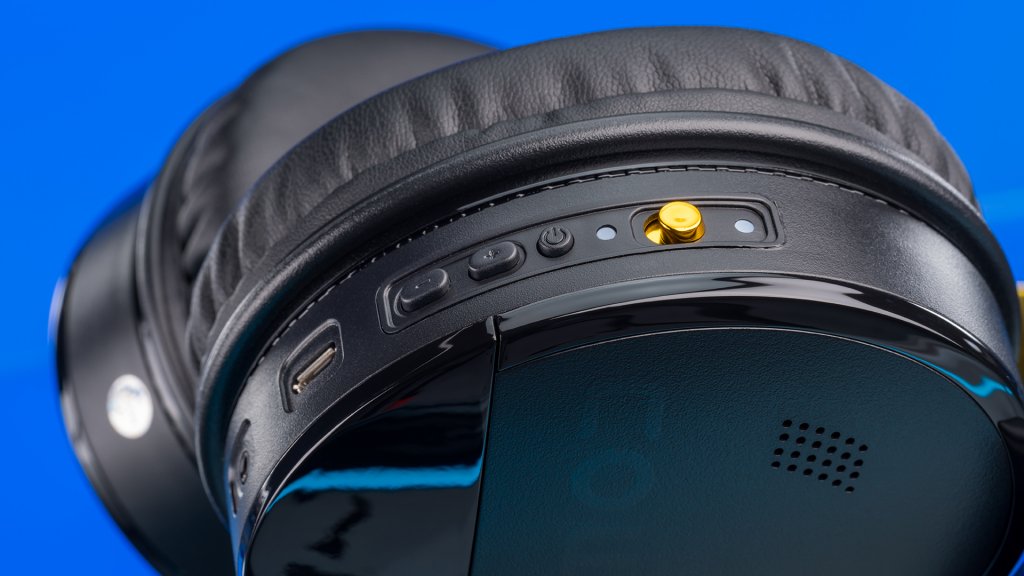 About that noise cancellation I talked about – aside from the build quality the real feather in the Cowin E8’s cap is its Active Noise Cancelation. There is a slight reduction in ambient sound just from putting the wireless headphones on due to their thick padding, however when the ANC is turned on there is a considerable drop in noticeable sound.

In addition to the upgraded overall sound on the E8, the ANC also seems to be enhanced from that on the E7 and even the E7 Pro. Office chatter, vehicles, and other normal ambient noises are substantially quashed when the ANC is turned on, even without music playing. When music is playing and ANC is turned on, the distracting noises are hard to pick up even when trying. From others who have tried both models the reports are that the E8 has upgraded performance over the E7 Pro in this realm as well, which means that extra cash you are forking out for the E8 is equating to a better product.

While the ANC worked very well for keeping outside noise out, there was some leakage that resulted in my music being audible to surrounding coworkers in a rather quiet office. This isn’t ideal for those scenarios and less effective than the E7 Pros, however I care more about blocking environmental noise and in this arena it definitely did the trick.

Tuning In to Cowin 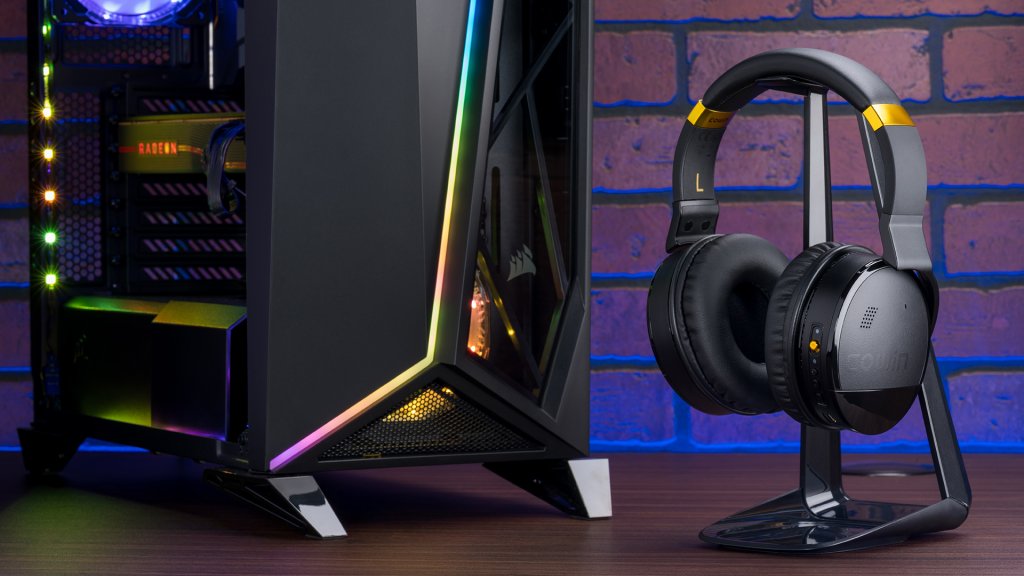 When I first came into contact with the Cowin E8 wireless headphones my expectations had already been built on the reputation Cowin had established with their E7 and E7 Pro. Whether or not that is a good thing, it inherently adds more pressure to continually enhance the next product in the lineup.

Whether or not Cowin felt the pressure or just had a solid roadmap for developing a winning product, their latest iteration has not only done the E-series of wireless headphones justice but taken them to a new level. The E8 has better build quality, greater comfort, and better ANC than the predecessors, with more attractive design to boot. As far as sound quality goes, Cowin did a good job on the E8 and although there are some shortcomings, overall I think they are a proper pair of headphones for all but the most discerning audio enthusiasts.

At the end of the day, the key takeaway is that Cowin produced a pair of solid set of wireless headphones with legitimate active noise cancellation for roughly $150, which checks a ton of boxes and hits a reasonable price point for many people. Even with their history of winning models, Cowin has proved that their success isn’t built on a one-hit-wonder but a legacy of quality we can look forward to in the future.

This article was produced in collaboration with Cowin.