Up your game with the QLIPP Tennis Sensor 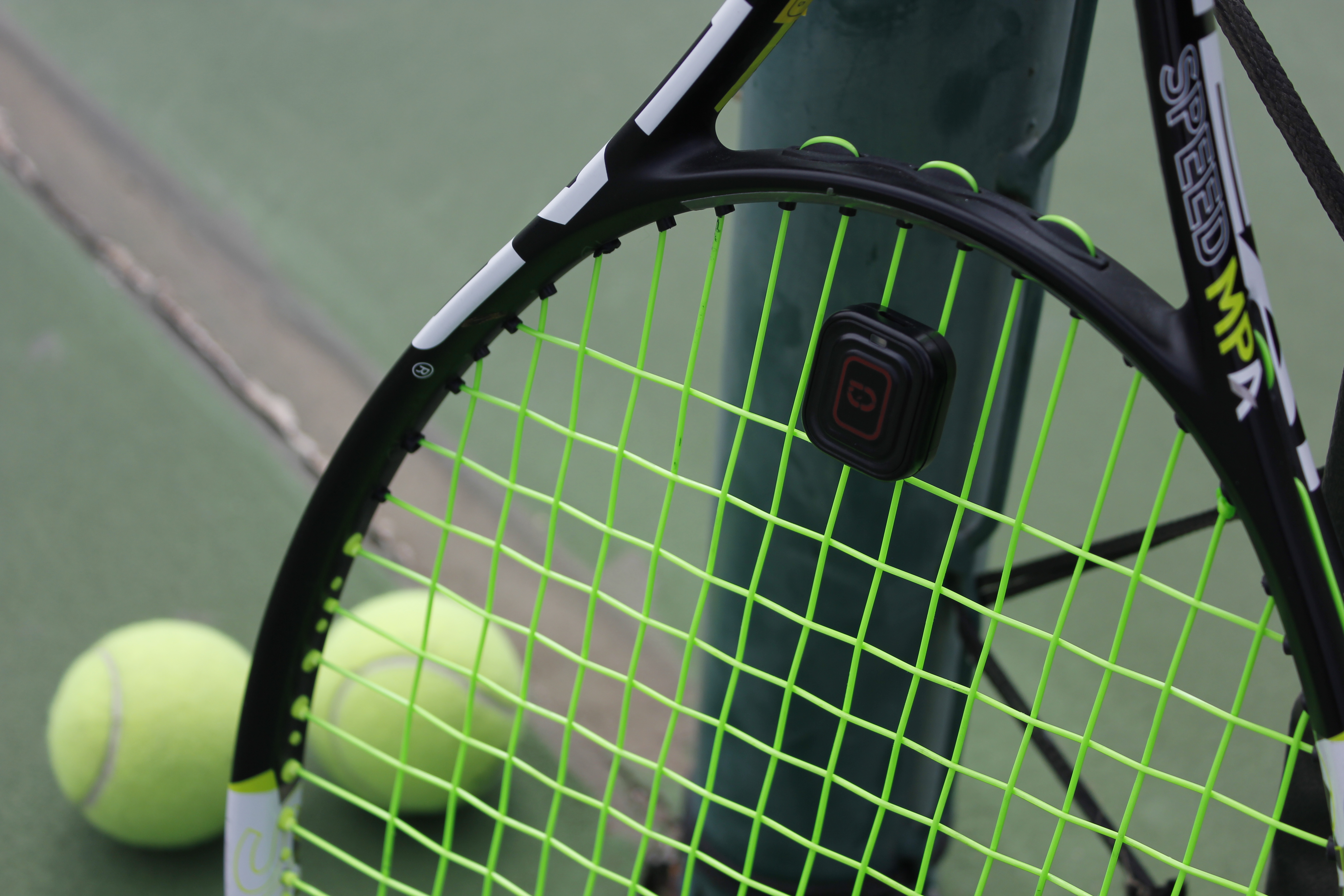 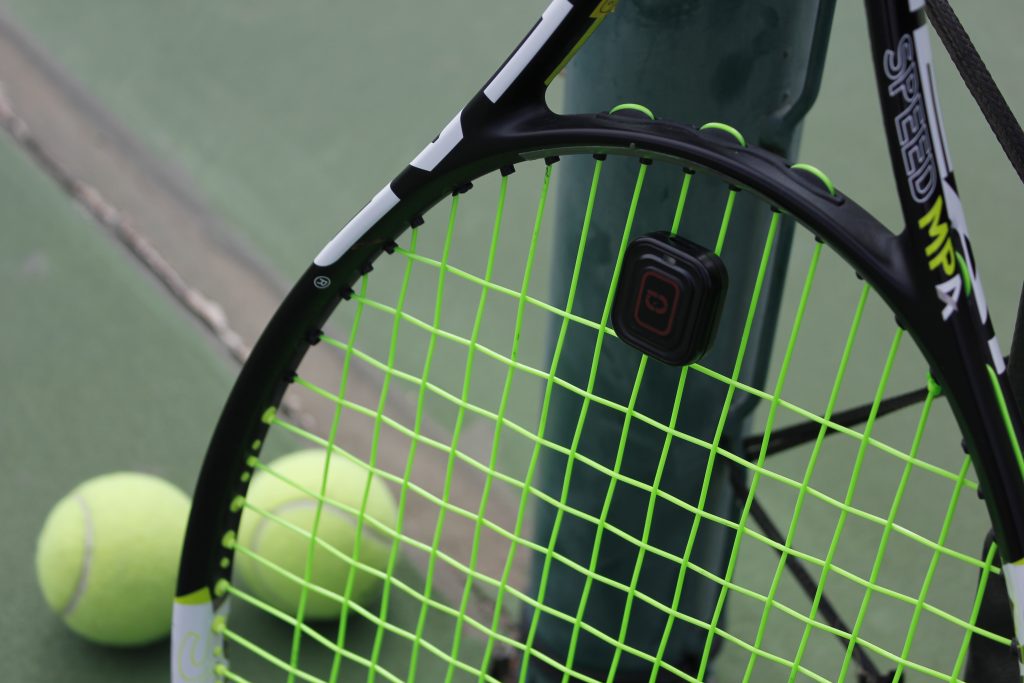 Back when I started playing tennis in high school, the only gadgets people had on their wrists and racquets were watches and rubber dampeners. Today, wearable technology is part of an increasingly growing niche market where your health and activity can be visualized and quantified for improvement. And now tennis dampeners are slowly joining the new health revolution.

Now up to serve:the QLIPP Tennis Sensor, an Indiegogo crowdfunded project by 9 Degrees Freedom, looks to break the mold from current tennis sensors located underneath the bottom part of the handle (also known as a “butt cap”), and other sensors built right into the frame or worn on the wrist by “QLIPP-ing” the sensor directly on to the stringbeds. This implementation gives even the oldest racquets a shiny new feel.

When unboxing, you’ll find the QLIPP Tennis Sensor and a micro USB cable for charging. The charging port on the device is located at the bottom, and so it could be difficult to charge the sensor while attached to your racquet. The sensor is made of plastic and is turned on by pressing the red icon until a blue light appears, and holding the red icon for 5 seconds turns the device off. In the QLIPP app settings, the power indicator can be toggled on/off through the smartphone app so you can squeeze as much juice out of it for those marathon matches or extended training sessions.

Under the hood of the tiny 8g sensor is an accelerometer and gyroscope that reads racquet speed when swung, and calculates the stroke, ball speed, and spin based on two years of research and development with tennis professionals and coaches for their algorithm detection. Since the sensor sits comfortably on the stringbeds, this logically should provide the most accurate data. Given how much technology is packed inside, it’s surprising that the sensor isn’t water proof/resistant. As it is, playing in the rain is out of the question. 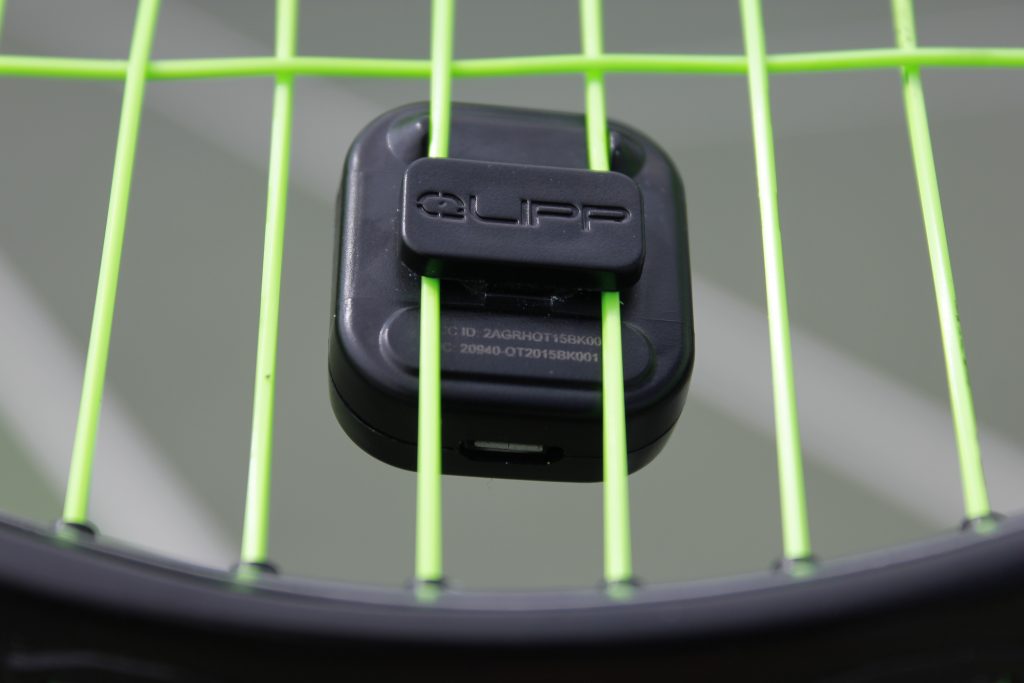 First things first: charge the QLIPP Tennis Sensor to full before use! It takes about 90 minutes to fully charge and that charge lasts about 4-6 hours depending on the settings you choose. As you’re waiting for the device to charge, download the QLIPP app on either iOS or Android devices and follow the prompts to setup your user profile. Also if you own an Apple Watch or Android Gear, you can sync up those devices and track your shots in real-time. 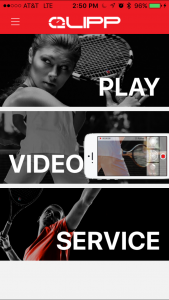 After setting up the QLIPP app, now it’s time to get the sensor on the stringbeds. You’ll notice on the back of the sensor there’s a small raised panel that says QLIPP and two knobs at the top. Turn the sensor so that the back panel fits in between the middle of the vertical strings. Now, turn the sensor so that the strings fits under the raised back panel and make sure to get the strings on the inside edge of the knobs. This can be difficult depending on the stiffness and gauge (size) of your strings, but be patient and it’ll get easier with time. Once that’s done, you’re locked in.

To remove the sensor, push the strings away from the two knobs and twist. Taking the QLIPP Tennis Sensor off and on can be tricky the first few times, but I found it was easier to attach and remove the device the more I did it. I recommended watching the tutorial videos on the QLIPP website before attaching the sensor to the racquet. There were times when I thought I’d break the locking mechanism or damage my strings because I have 16 gauge (18 is the thinnest) stiff, polyester strings, but I never did.

Once you attach the sensor properly, it’s extremely secure. In about six hours of testing, I felt confident that it would take a lot of force to pop off the sensor during play. My only concern would be miss-hits directly impacting the sensor. More on that later.

To start gathering data, touch the red icon in the middle of the device. A blue light will start flashing until you open the QLIPP app and connect the devices via Bluetooth. Once connected, you’ll see the home screen that’s divided into 3 sections: play, video, and tutorial.

In Settings, you can toggle the QLIPP’s power indicator on or off during use in case it’s distracting, or to save some power. There’s also a toggle for audio, which calls out your shot and ball speed with every stroke through your device’s speaker. Probably not the best to have this option on during a match, but it can be helpful for analyzing individual strokes like serves in practice. You can also change the unit of measurement between KM and Miles, and the Low Battery Indicator turns the power indicator red on/off.

Take note that you’ll need your smartphone or tablet near the court, since the QLIPP Tennis Sensor does not have any internal memory. This shouldn’t be an issue since the sensor has a connection range of 50 meters (164 feet), which should easily cover the court.

Become Your Own Tennis Analyst 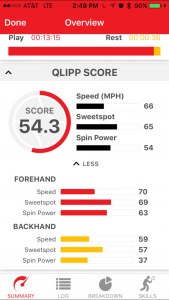 After recording a session, you’ll find a log of it in the History tab, which shows the date and time of a session, the session length, the number of strokes recorded, and whether the data came from the Play or Video options. Inside a session, you’re taken to the Summary tab where there’s a plethora of data for spin, speed, and sweetspot consistency when you hit the ball, which contribute to your overall QLIPP score for the session.

For more data granularity, there are three options following the Summary tab: Log, Breakdown, and Skills. 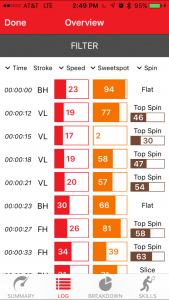 The Video feature in the app displays your stats at the bottom of the video and highlights the stroke used at the playback time to help analyze your form. Another nifty feature for video is slow-motion to really dig into your strokes. You’ll find the same stats tabs as in Play mode at the bottom, which makes the app consistent and easy to use overall.  For recording setup, I recommend using a tripod with your device for the best quality. For this overview I had my partner hold the camera, and the video quality was still superb.

When you’re looking at the QLIPP’s sensor accuracy, I found that it was consistent, for the most part. In the video screenshot, I hit eight serves, one of which counted as a forehand. In another session, QLIPP recorded 255 shots, and 149 forehands, 97 backhands, 18 volleys, and only two recorded serves. I believe the QLIPP sensor registered many serves as forehands since the stroke breakdown was in heavy favor for forehands.

Like any other activity tracker, your results may vary. However, since activity trackers and sensors are designed to help users improve, I think with consistent use and trial you’ll see your game slowly improving by seeing statistics and videos like your personal tennis analyst. 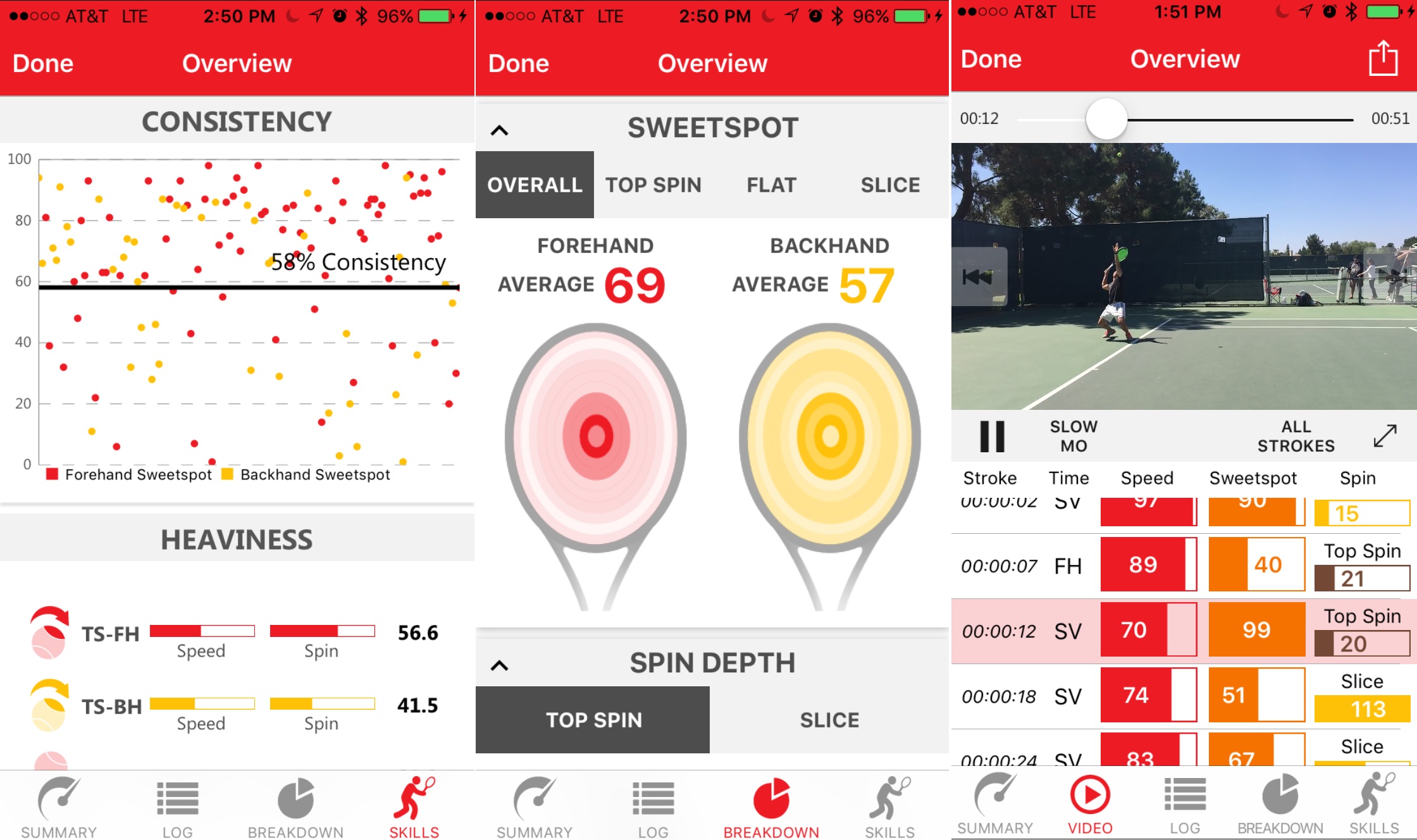 The sensor also connects you to your friends who own a QLIPP, as well as other players all around the world through QLIPP’s Compare feature. You’ll be able to see how your QLIPP Score and total strokes for the current month rank against your friends and other, giving you that extra motivation to train harder and play longer. 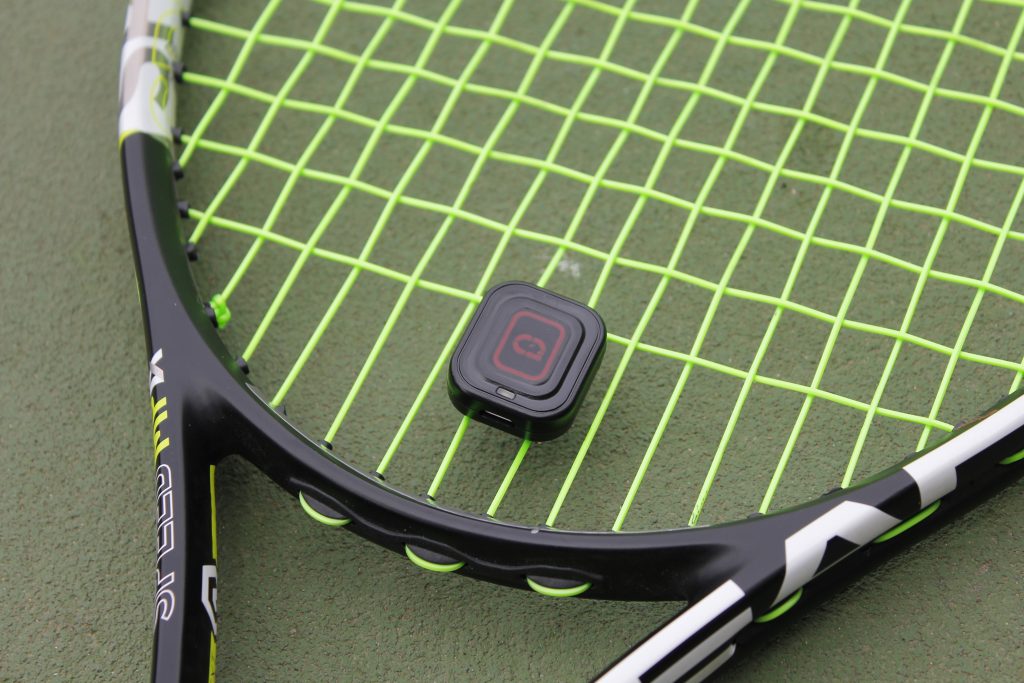 Although QLIPP isn’t a well-known tennis brand like Babolat or Wilson, the tennis sensor is a welcome addition to the slowly growing activity tracking market for tennis. This tracker is not for everyone: an older or recreational player who cares more about placing the ball in the right spot than how much speed or spin they are generating on their strokes won’t get much out of it. The QLIPP Tennis Sensor will get the most use from young aspiring players or more seasoned veterans in competition.

For $99 retail, the QLIPP Tennis Sensor provides very detailed information about every stroke you take, ball speed, spin depth applied, and sweet-spot score. Also, if you have an Apple Watch or Android Wear smartwatch so you can track your session in real-time, which makes the price point even better for all the features jam packed in the sensor and its mobile app. 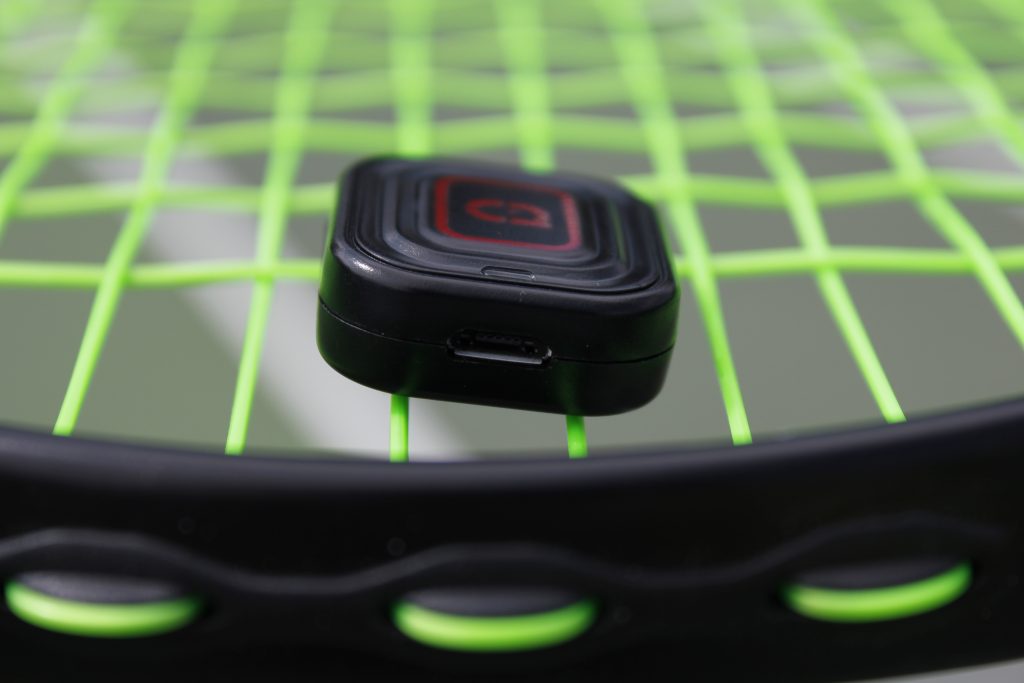 With all the features, there are also some minor faults (pun intended) with the sensor. Attaching and removing it can prove to be a challenge the first couple times, especially with thicker strings that are tougher to clip into place. The stroke detection worked well in my experience, but the algorithm could be improved to recognize the proper strokes, most notably for serves. In regards to its construction, the sensor’s weight was unnoticeable but the plastic casing felt fragile. This was especially true when I miss-hit the ball directly on the sensor, sending the front panel flying off like a typical dampener. Maybe if the case was held together by silicone around the plastic, the device would be more durable against direct impacts.

Despite its few shortcomings, the people at 9 Degrees Freedom developed a stellar and affordable tennis sensor that gives any racquet new features. If the team continues to improve their flagship product, the QLIPP Tennis Sensor could prove a major player amongst the tennis brand behemoths and the activity tracker market.