Avegant Glyph Turns Any Device Into a First-person Experience 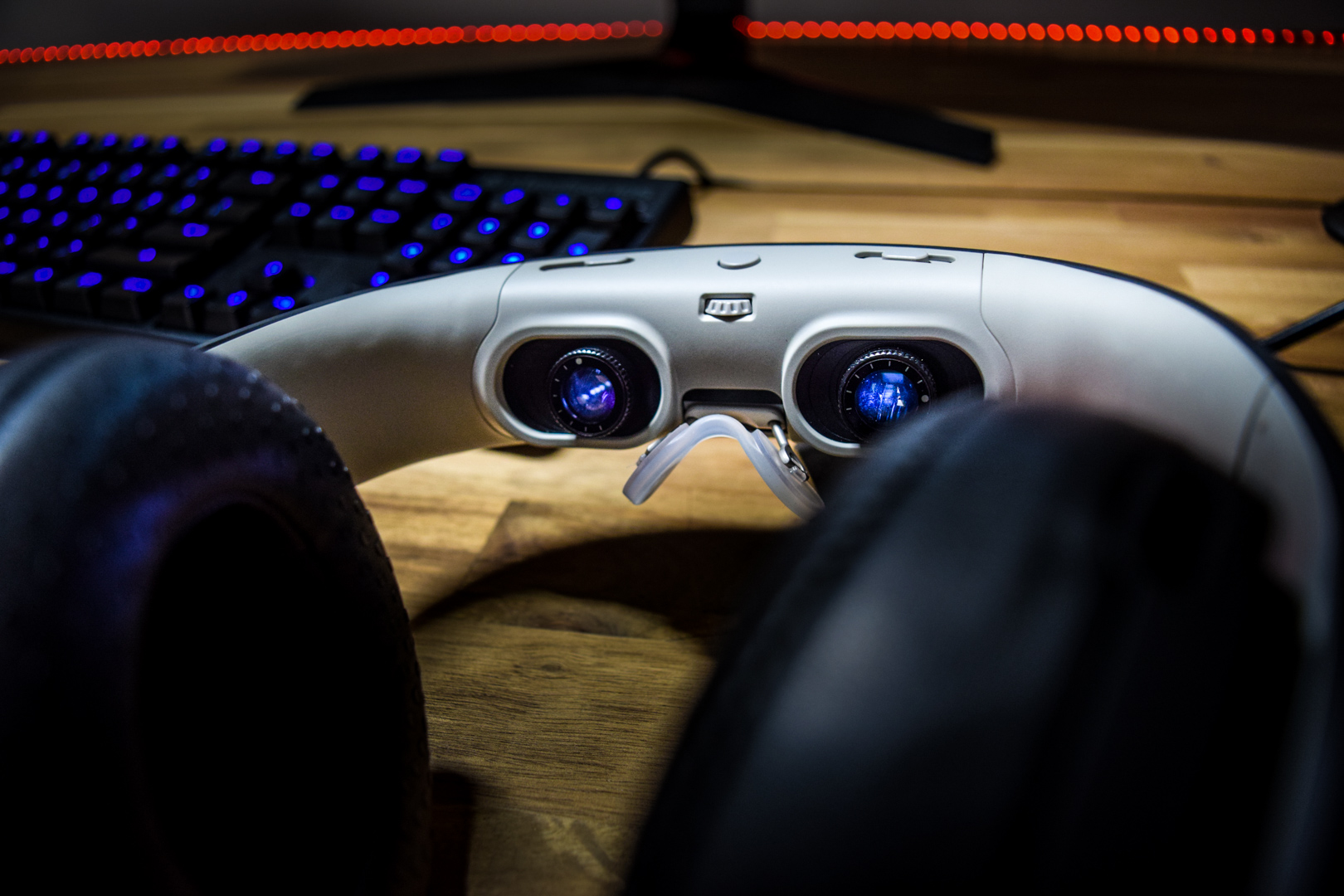 Our constant hunger for richer experiences and departure from the status quo is what pushes the boundaries of human creativity. It’s why I love technology: the dreamers and heretics of yesterday are the visionaries of the future. Some of those dreamers are the folks over at Avegant, who have a firm vision of what the future of entertainment is. They’ve brought vision to life in the form of the Glyph personal theater headset.

Avegant first started making waves with their prototype-model Glyph when it was announced at CES in 2015, and followed up this year when they won the CES Editor’s Choice Award. Before that they had a few different beta versions floating around over the past couple of years and launched a successful Kickstarter campaign in early 2014 that raised $1.5 million from backers. Suffice it to say that this thing had a ton of buzz generated in the tech community, and the latest production edition is here. 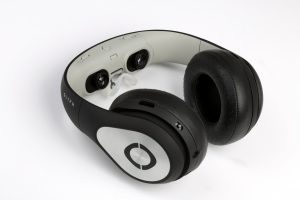 At first glance, putting this headset on immediately brings to mind X-Men’s Cyclops or Geordi La Forge from Star Trek, and is not something that would go unnoticed if you whipped it out in a public place. But this device won’t allow you to blast lasers at your enemies or see energy phenomena. What it does instead is project your favorite content into your eyes and into your ears for a personalized home theater-type experience anywhere you go, without the screen.

Direct light in your eyes, you say?

That’s right. There’s no screen. The headset is designed using Avegant’s virtual Retinal Imaging Technology, which is specifically created to reduce the eye strain associated with staring at a screen for long periods of time, especially at close distances.

So how does the Glyph work? It all starts with a low power LED, which passes through a set of Avegant’s secret optics. This light is then reflected off 2 million micromirrors, where it is then directed back through another set of optics and onto your retinas. The way that the micromirrors bounce the light back is modeled after how we naturally view things, perceiving light and color in our environment through the interpretation of wavelengths. The micromirrors in the array are all individually helping to shape the image fit for the eye, with a high level of picture clarity. The Glyph operates through an included HDMI cable/mini HDMI port, which can be hooked up to an optional converter so you can access content from a variety of other devices. 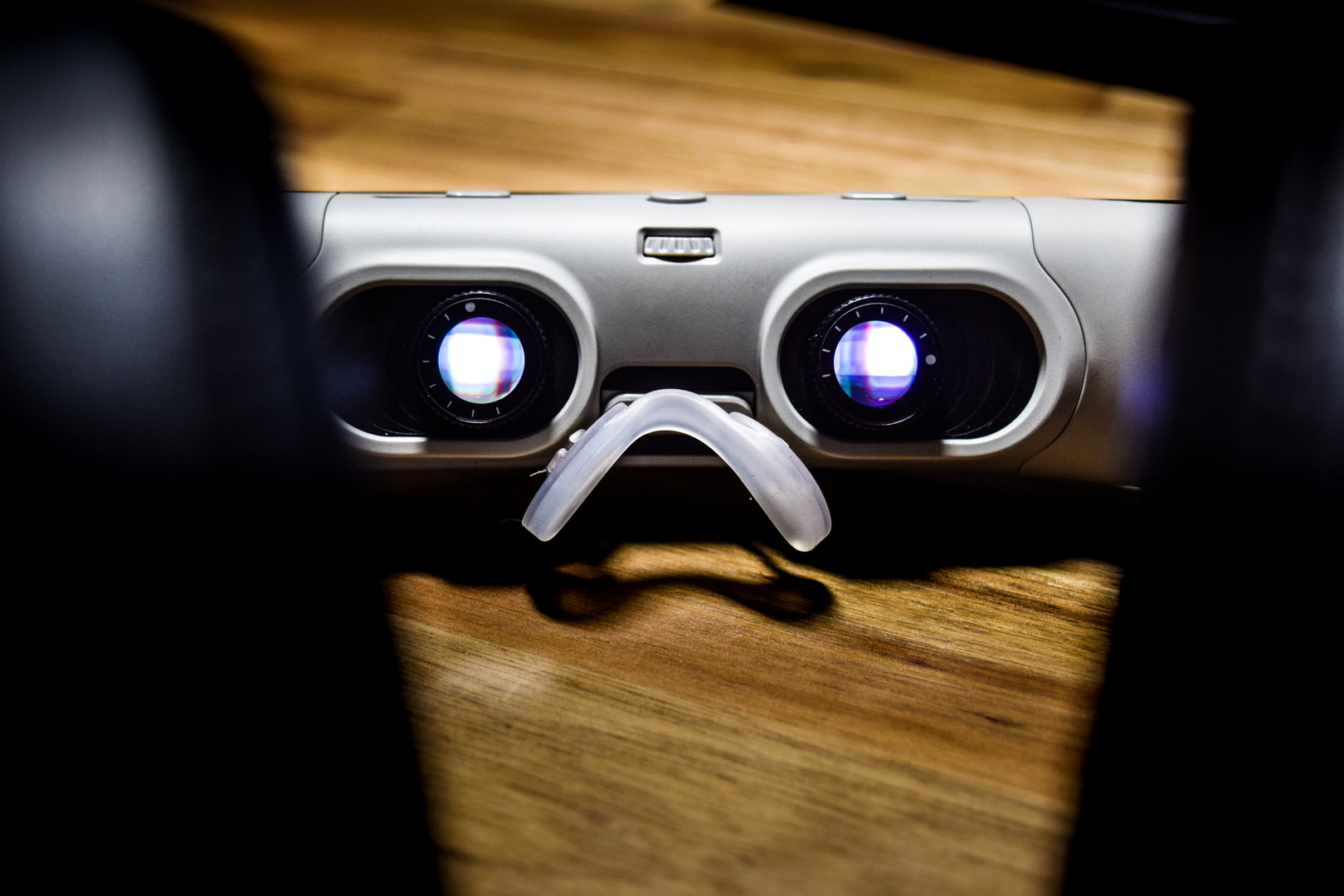 Who needs a Glyph?

If you find yourself traveling frequently, the Glyph could be a great new addition to your boredom emergency kit. Instead of craning your neck down at a screen for 5 hours on a cross-country flight, you slide this on your face and get cozy for an up-close theater experience.

The initial thought of having something so close to my eyes for an extended period was off-putting, however the way the light is reflected from the mirrors instead of a straight shot towards the eyes should eliminate fatigue from long viewing. And speaking of next-level entertainment, Avegant has some exciting updates in the works to ensure the Glyph can keep your eyes fixed on the future. 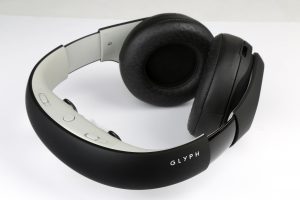 As a result of their partnership with the cinematic VR company Jaunt, soon your Glyph will have active head tracking, which would allow for encompassing 360° content viewing and navigation. If you haven’t heard of Jaunt, they produce cameras for shooting 360° videos, as well as providing a platform for delivering the content.

Utilizing this tracking technology would allow for some amazing interaction with content, especially music festivals, sporting events, or any of the 360° content on YouTube  all from a turn of the head. In my experience the latency on the device was pretty minimal without any noticeable lag that would cause motion sickness or frustration, meaning you could use it for gaming if you wanted to.

I’ve flown FPV drones before (most recently the DJI Phantom 4), and the experience is most definitely a unique one. Soaring over the trees with a live video feed is exhilarating, and this has opened up an area of videography and photography that only a select few had access to before. The Glyph can take this experience to another level, directing the video feed straight into your eyes instead of to a cell phone or tablet, to give you the most realistic FPV possible.  Drones like the DJI Inspire, Phantom 3 and 4, Parrot Bebop 1 and 2, 3DR Solo, and Amimon Prosight FPV can all be used with the Glyph headset right out of the box, and to make the experience even more fluid some even allowing you to control the camera rotation with the movement of your head.

While the idea of FPV goggles is standard in drone racing, it isn’t quite as popular with hobbyists or artists: at least not yet. One of the differences between other FPV goggles and the Glyph is the degree to which you are removed from your current environment. The Glyph is designed so that you retain the ability to look over and under the headset, as to not fully remove you from your actual environment.

One of the great benefits of plugging in to use the headset direct from the controller instead of your mobile device as a monitor (aside from having your face stuck in a small screen) is the liberation of your battery life. I noticed a pretty sizeable drop in my phone battery during a flight, not to mention the heat it generated in the short amount of time I was in the air. The Glyph has about 4 hours of video playback life, and unless you happen to have a whole backpack full of drone batteries charged up it will easily exceed your max flight time.

When it’s time to switch from play to work, the Glyph offers that same individualized experience. You can tackle sensitive emails, personal finance, and other delicate matters without needing to concern yourself with exposing any information to strangers. It’s perfect for trips on an airplane or busy train. 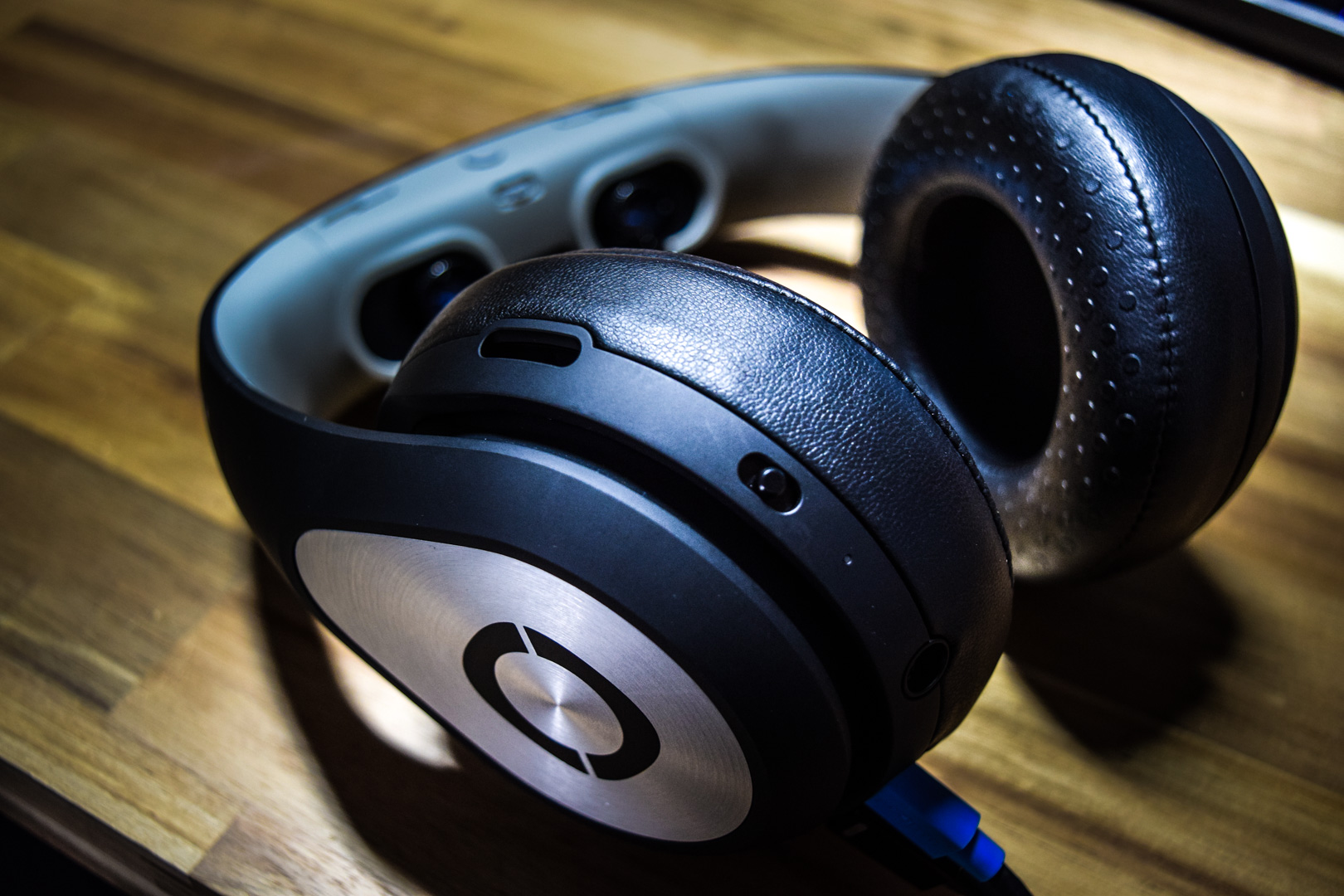 This is not VR

One thing that the Avegant Glyph is definitely not trying to be is virtual reality. While it may sound similar at first, this headset has an entirely different purpose. Avegant is going for a mobile personal theater that maximizes the experience without taking you away from your current environment. If you were to even game in the Glyph out in public, you could still see what is happening around you and maintain your “spatial awareness”. Now, being able to see passerbys give you sideways glances might not be what the engineers were thinking of, but it sure helps you to keep from walking into light poles or oncoming traffic.

This headset is designed to be a plug-n-play solution, compatible with any device you can get an HDMI cable (or converter with USB, USB-C, microHDMI, Lightning, etc) into.  Also, because there is no lag time with the content delivery you don’t have to worry about motion sickness or eye fatigue that can sometimes come with VR headsets after long periods of use.

Glyph also supports both half frame side-by-side 3D and full frame side-by-side 3D media. In the half frame mode the 1280×720 content is stretched to fit both screens, but it must be formatted to appear side-by-side when viewed on standard screens. In the full frame stereoscopic mode, the headset automatically displays the content as long as the source is suitable for frame-packed 3D. Avegant recommends Windows 10 PCs with recent NVidia GPUs or Playstation 4 for frame-packed 3D content. 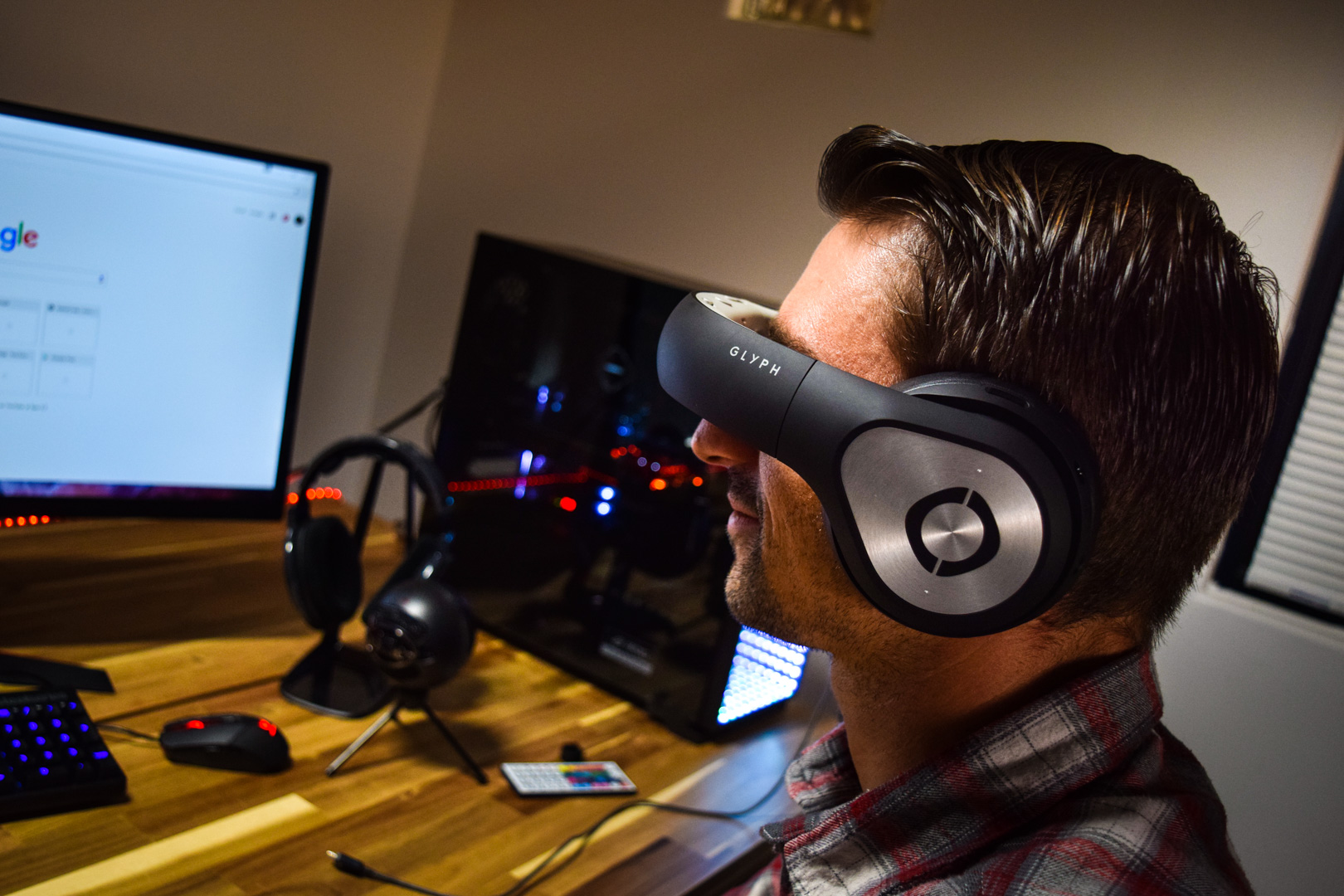 The display is bright and crisp, once you dial in the focus. To get the proper video adjustment you need to adjust each eye lens individually, via a slider on the top of the headset. The video screens didn’t feel like they were too close to my eyes, or overwhelming as sometimes VR can feel the first time you try it on.

The over-ear pads are plush and comfortable, with a soft faux-leather feel to them. To get the correct fit on your face, there are 4 included nose bridge rests with soft silicon padding. Each one is set for a different width nose, and they can be swapped out via their magnetic touch points. While I didn’t wear the Glyph for hours on end, I did wear it for a reasonable amount of time without having any discomfort. The squishy nose pad and the ear pillows kept everything in place gently, so I would imagine that during a multi-hour flight it would stand up just as well.

One thing that extends the use of the Glyph is the ability to retract the lenses into the head band, so you can use them as strictly headphones. By removing the magnetic nose piece, you can flip the visor up on your head and regain your full field of view. The audio quality is pretty good, and I am glad they thought to include this feature. The headset is not cheap by any means, so allowing for regular use as a standalone audio device makes it more feasible as a regular companion on trips. Another perk to the headphone portion is that the audio can run passively through, so battery life is not cause for concern. In the event that you do need to plug in, the charging port can be used alongside the media input port without issue.

With FPV and virtual reality having far more uses beyond the gaming community, the Glyph and advanced audio/video systems like it are going to see a growing demand on the consumer market. The only question is whether or not we are ready for where the journey will take us.