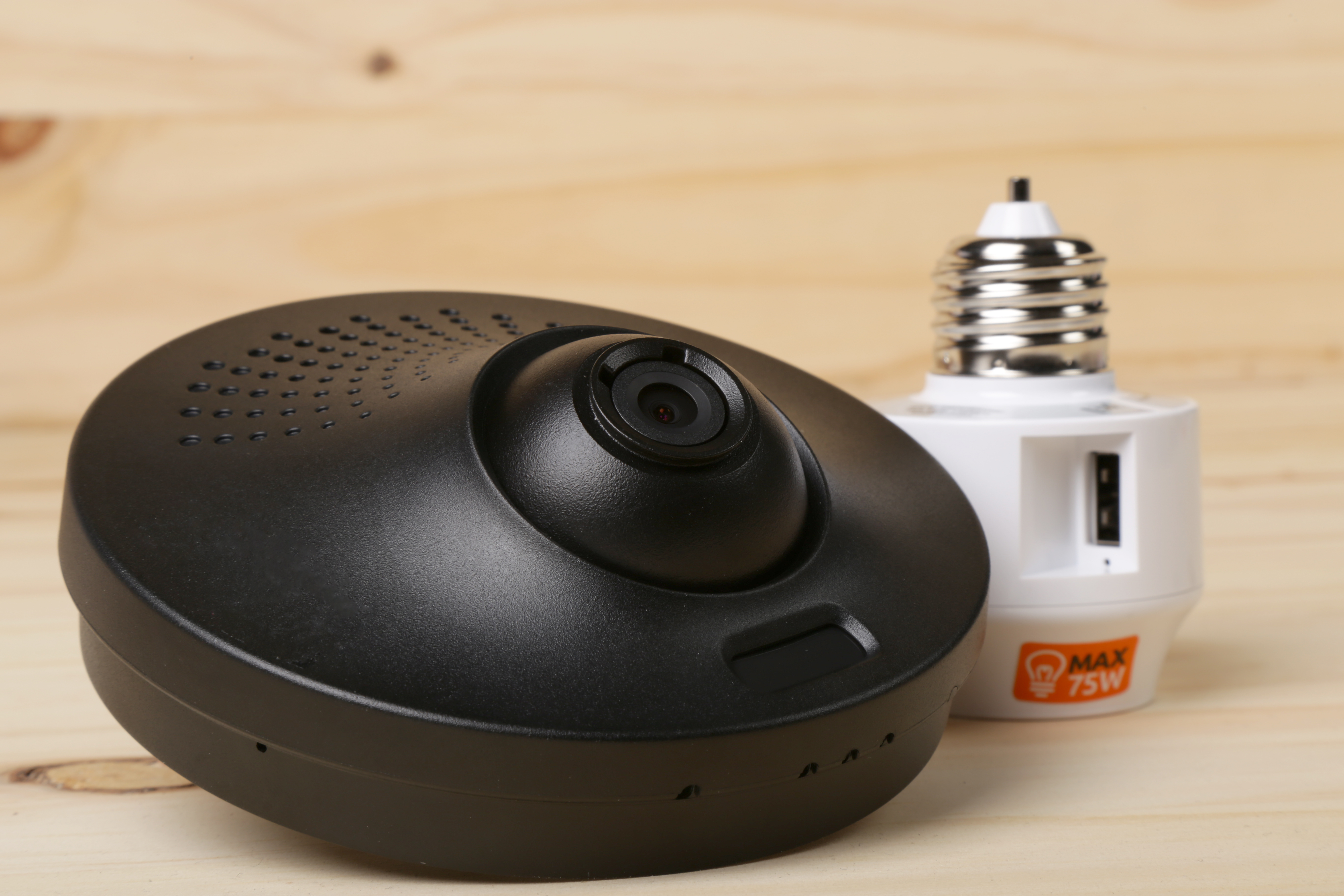 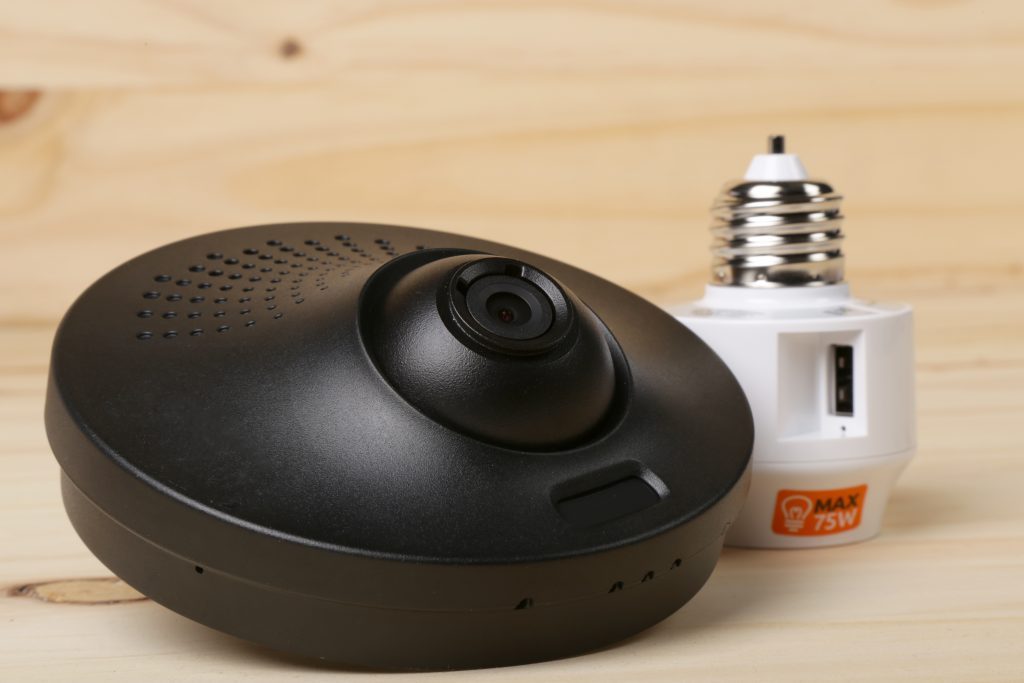 I’ve been thinking about getting a home surveillance system for a few months now. My neighborhood is pretty safe, but you can’t be too secure. Especially with Christmas shopping around the corner and packages being delivered, there’s a greater chance of getting ripped off.  I know people who’ve had their packages snatched from the front porch, and without proof you’re essentially sunk. I took the Toucan home security system for a test drive, and it goes beyond passive home surveillance, delivering actionable and real-time control over your home with some impressive smart features.

If you aren’t familiar with Toucan, it’s the latest device to be powered by Kuna technology. Kuna is the force behind the app and cloud used for both Toucan and Maximus (another smart surveillance light manufacturer) that gives them all the shiny bells and whistles which separates these cameras from nearly everything on the market-which made it an awesome gadget to have. What are those bells and whistles you ask? How about a live video feed, motion detection recording/light illumination, two-way voice communication, and an alarm, all with push notifications and remote operation. 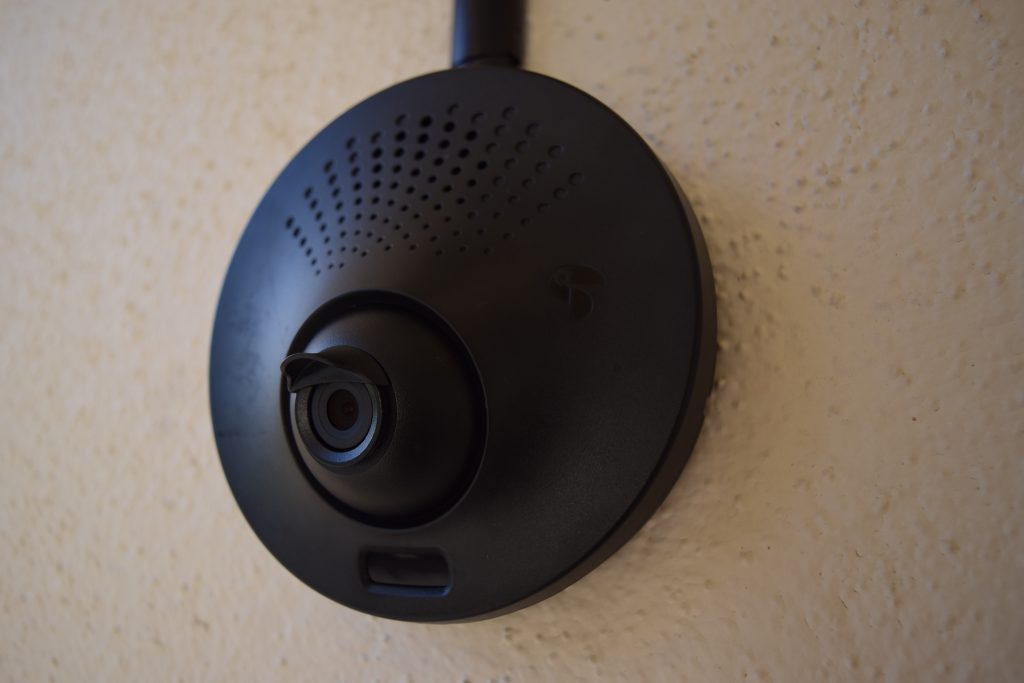 So when you typically think of home surveillance, what comes to mind is a standard multi-camera, IR setup. These have either a DVR (digital video recorder) or an NVR (network video recorder) setup with a hard drive and operating system which you link up all the cameras to.  One of the reasons I haven’t jumped on one of these earlier is the nature of my home arrangement:  the main access points are all facing one side, so I don’t need a bunch of angles covered by multiple cameras. Another is the cost, which can get pretty high depending on the system size and features. Individual IP cameras have become increasingly common, but they have their limitations as well.

Toucan is part of the new wave of home security that combines the user interface and utility of home automation with the full function of a traditional surveillance setup. The camera setup, while low-profile, is weatherproof rated at IP44, withstanding rain, snow, and humidity as much as one might expect under a porch light. The lens has a 116° diagonal FOV and is manually rotatable 40° left-right or up-down.

What sets Toucan apart from the traditional surveillance systems the most is the full control of your entryway area. Light, video, and 2-way communication are not all found in other security systems on the market. 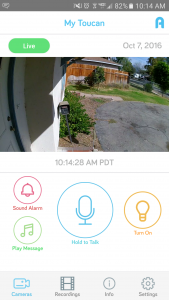 Let’s get into all those goodies. For starters, as a security camera it has both live streaming and motion triggered video recording in 720p. It’s not full HD, but I found that it was solid quality on the phone. When you export the file to view on a desktop it is good enough to catch major details, but not “entertainment quality.”

In addition to being able to tune in and listen/observe what is happening in real-time, Toucan also uses a passive infrared (PIR) sensor to trigger video recording, which is stored in the cloud and accessible via the app. One of the awesome things is that it starts recording 10 seconds before motion is detected. This allows you to see the entire nature of the activity, not just after something trips the sensor (you can see this all in action in the video above).

When you tune in to the live view, you have a couple of options for communicating with the world at your doorstep. First, you can use the 2-way intercom to speak with anyone through the app. It should be noted that whenever you tune into the live view you have an audio feed as well, so you could just listen and watch without speaking. The speaker is actually pretty loud for this little thing, and the microphone picks up the slightest sound with ease.

Something I found particularly useful on a Sunday afternoon was the recorded messages. There are three programmed messages that you can play, without putting a stop to what you are doing or speaking yourself via the intercom. The messages you can choose from are “I’m sorry, we’re pretty busy right now,” “Can I help you?,” and “I’m sorry, we’re not interested,” which came in handy when a salesman came to my door to bother me.

As a security system there’s a 100dB alarm that can be activated from the app at any time, and I have to say that it absolutely demands attention. It isn’t nearly as loud as the alarms by providers like Brinks by any means, but it will attract some eyes to the area when called upon. 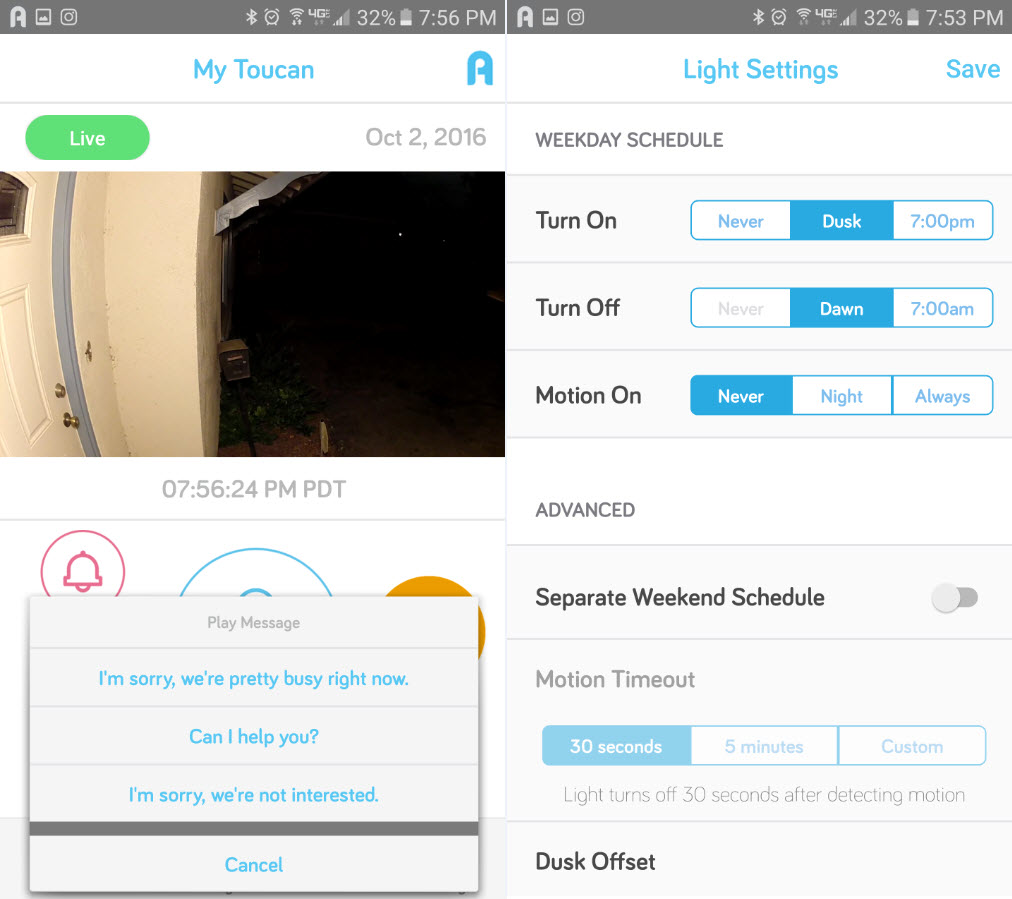 Within the app you can control not only the surveillance camera, but also the smart light socket. This is where Toucan draws all its power, which enables you to connect it without any hardwiring. I wasn’t constantly checking the app throughout the day, however when I received a push notification for activity I would check the video clip to make sure everything was working properly. I’m not overly paranoid but it does feel good to have that piece of mind even when I’m away from home.

How to install a Toucan

No, we didn’t skip anything there. There are no hard wires to connect: all the power comes from your light socket. It’s a beautifully simple retrofit that works with even the oldest or most basic socket out there. It doesn’t work with motion sensor lights due to the USB plug location, but this thing acts as a motion sensor on its own.

The device should be placed near the door so you can communicate with visitors and have a good angle of the area. I altered the angle on mine to capture more of the driveway after a few days of using it and turned the sensitivity down a touch. You do have to be within about five feet of the device when you are pairing them, but under normal operating conditions I noticed no issue with the Wi-Fi signal strength. 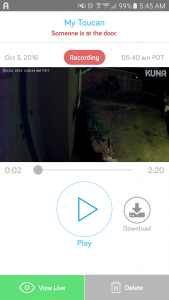 The Kuna app is what really ties this whole thing together, and I was quite pleased with how intuitive it is to use. The app has everything you need, and nothing you don’t. Cliché perhaps, but in this case it proves to actually be true.

Toucan alerts are sent when the motion sensor picks up movement and records a 2:20 video. You can turn off the push notifications for this or even put a sleep timer on for them to not bombard your phone if you plan on having a lot of activity around. The notification sends the video for you to review, where you can download it direct to your device or switch to live view.

From the recording library, you can see all the motion-triggered events arranged by date, with a GIF of the video. You can download the videos, which might be useful depending on your plan. Toucan comes with a 14-day premium plan, which allows recordings to be kept for 30 days. Without the premium plan activated the video recordings are kept for two hours, which would be where downloading straight from the push notification comes in handy. 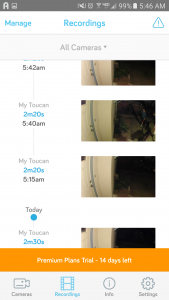 Everything you would need control over can be done in the app, save for adjusting the camera angle. The motion sensitivity is adjustable, which I initially had set at 95 but after pivoting the camera to capture more of the walkway dropped down to 73. Toucan states the motion detection range is 10ft, however I feel it is goes a little beyond that.

Within the interface you have the capability to turn the light on and off, as well as set it on a schedule. This was one of the fun perks, and since the device draws power from the socket you need to leave the switch turned on. I have mine set to go on at 7 pm and off at 5 am, which mimics my normal pattern. The cool thing is that I don’t have to worry about setting up timers on lamps while I am on vacation, and you have the option to set up a different weekend schedule. You can set the light to go on along with the motion detection recording during the day, night, or any time it is triggered.

The audio that comes through is very clear, and even when I am at the office my conversation through the intercom doesn’t lag. The speaker volume can be adjusted, and I actually turned mine down a bit because it’s quite loud for the size. 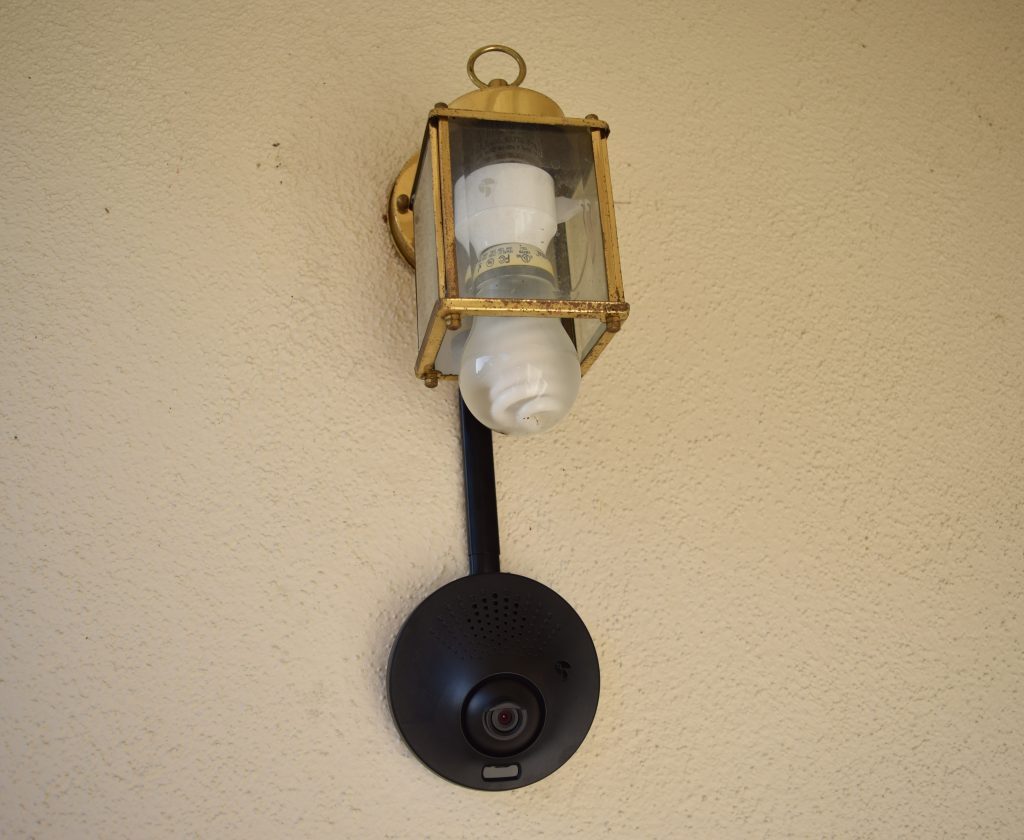 I love this thing, no question about it. The app interface is seamless and intuitive, while the product design is on point. The camera feels solid, like it will stand up to the weather and regular use without any issue. The video quality is fine for what it does, and the functions are all very useful on a daily basis. I like how the unit is also designed to have a prominent place next to the front door, so anyone approaching with malicious motives is captured at an angle that shows their face, and the unit also acts as a deterrent.

This is one of the home automation gems that I am thrilled about: the features that make it cool and the ease of use that makes it practical. In comparison to many of the gadgets out there that are smart but not sensible, the Toucan slips fluidly into everyday life.