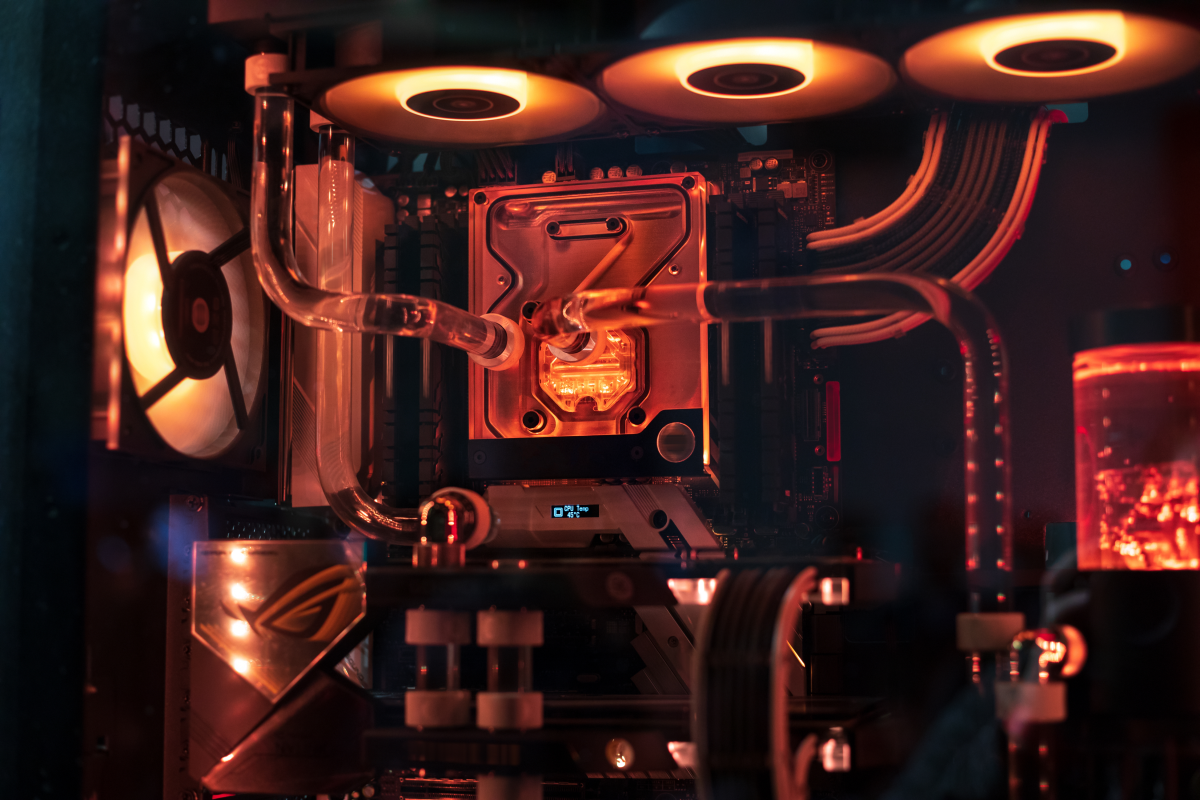 By Cody BrownNovember 17, 2021No Comments 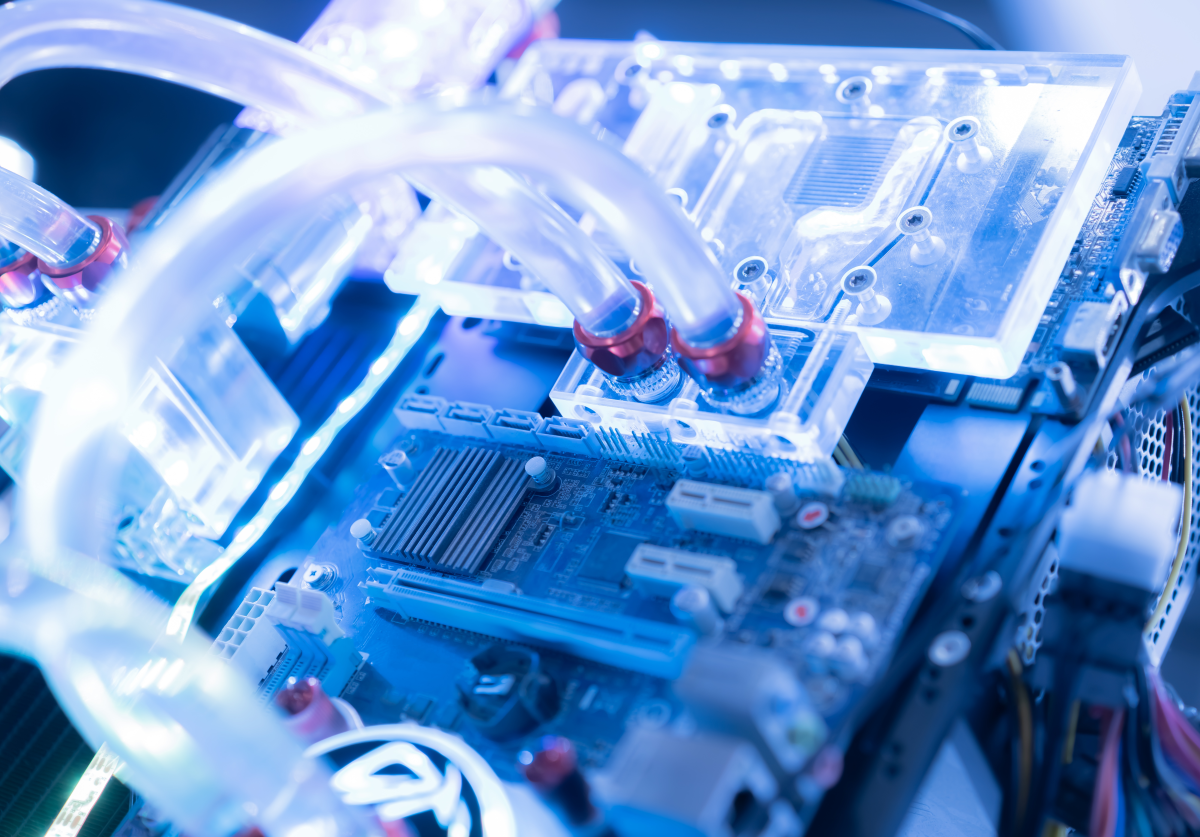 The PC water cooling vs air cooling debate has raged on for decades. But no matter what side of the debate you’re on, you have to admit that both cooling options have their place.

If you’re a first-time PC builder, and you’re looking to find the right cooling solution for your new rig, then you’ll want to carefully consider the benefits and drawbacks of each type of cooling. 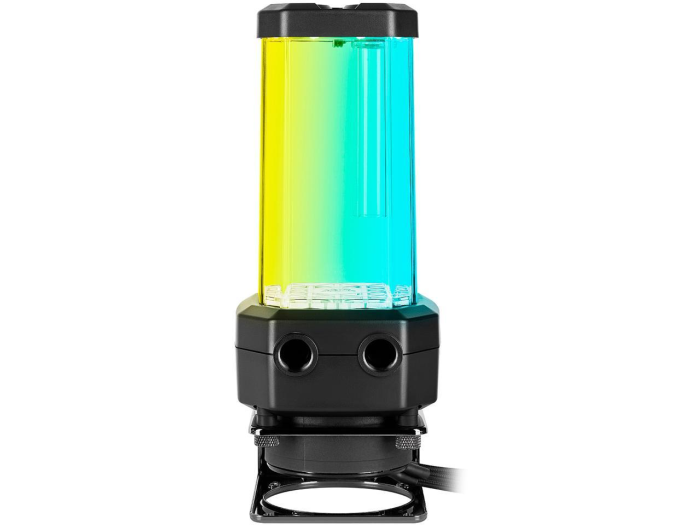 Custom water cooling loops offer the best cooling performance, hands down. Not only do they handle higher temperatures than AIOs and air coolers, but they can be necessary for overclocking powerful, high-end CPUs. If you’re planning on pushing high-end hardware to the extreme, then you’ll definitely want to consider running a custom cooling loop.

Creating a custom water cooling loop for your PC not only gives you the immense satisfaction and bragging rights of doing it yourself, but it also offers the highest degree of customization. By doing it yourself, you can choose the tubing, pump, reservoir, water block, radiator, and even the type of liquid you use inside the loop.

Additionally, a custom cooling loop also gives you the option to add liquid cooling to additional components inside your PC, such as your graphics card. 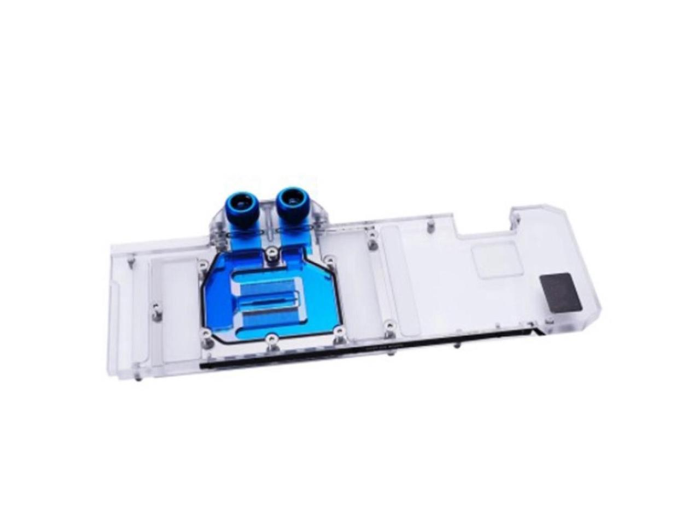 Of all the cooling options at your disposal, a custom water cooling loop is the quietest. While the pumps and fans might not be dead silent, a custom loop offers cooling with the least amount of noise overall.

In the unfortunate event that something in your water cooling loop dies, you have the ability to replace it without scrapping the whole system. Compared to an AIO cooler, which would require you to replace the entire cooler, this can be advantageous should a failure occur.

They also allow you to upgrade components of your cooling loop later on, as well as top up the fluid in the system (all liquid cooling systems lose fluid over time due to permeation).  This makes them a superior choice if you value not only cooling performance, but also upgradeability and longevity. 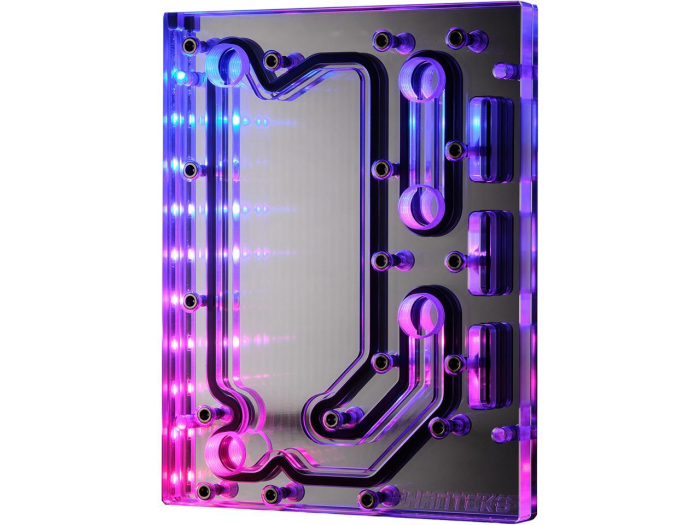 Phantek, for fans of tech

While a custom water cooling loop can offer the best thermal performance and customization, it’s also the most expensive route you can take. For example, this pump/reservoir combo runs at a higher price than some AIO and air coolers, and it’s just one of a number of components in a full custom loop.

Let’s face it: if you’re on a tight budget, then a custom water cooling loop probably isn’t the best use of your money.

Much like building your own PC, building your own water cooling loop can be very rewarding. But it’s also more difficult than slapping a cooler in your PC and tightening a couple of screws. As a first-time PC builder, this can make the process a lot more daunting.

There’s also maintenance to consider. Not only do you need to properly assemble your cooling loop, but you’ll also need to maintain proper fluid levels and make sure the various components in the loop are clean and functional.

The greatest rewards also come with the greatest risks. By building a custom cooling loop yourself, you introduce more points of failure, which can be harder to diagnose and prove more catastrophic to your system.

If you’re a first-time PC builder, or you’re anxious about using liquid cooling, it’s not a bad idea to seek supervision from someone with experience building custom cooling loops or opt for a safer option.

Let us help you build your Custom Cooling system 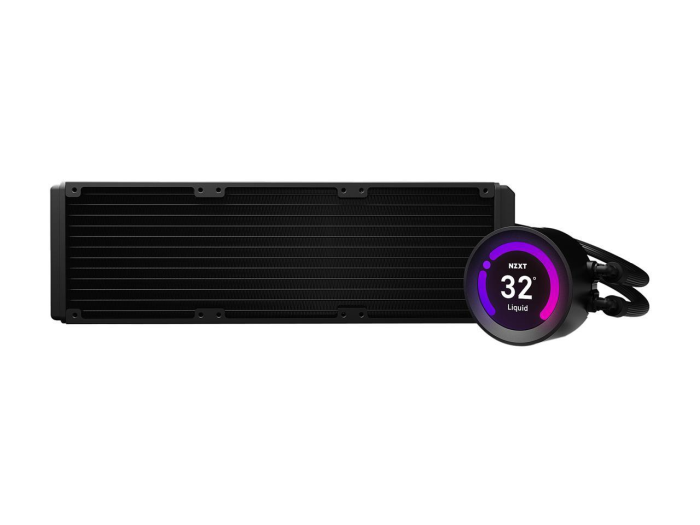 It’s no secret that liquid is more thermally conductive than air – that’s why we water cool our computers. Because of this, AIO water coolers are great for computers that run hot. They aren’t quite as effective at cooling as a custom cooling loop, due to the limited amount of fluid inside them, but they can handle sustained heat loads better than air coolers.

Perhaps one of the most attractive aspects of AIO coolers is their price. While they can get pricey, AIO coolers balance the trade-off between price and performance pretty well, with some being cheaper than air coolers. For example, the CoolerMaster MasterLiquid AIO is cheaper than some high-end air coolers, while also offering the benefits of liquid cooling. 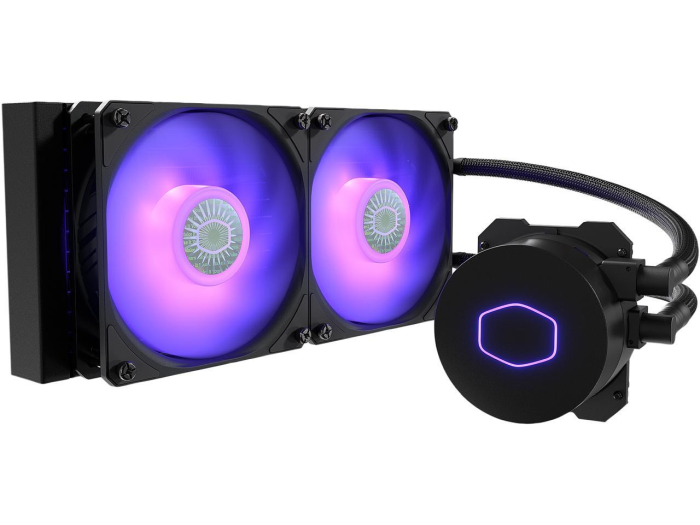 Compared to liquid cooling loops, AIO coolers are straightforward and easy to manage. No fussing with liquid coolant, tightening tubes, and bleeding lines necessary – simply mount the radiator and block inside your PC, and you’re on your way.

Because AIO coolers have fewer points of failure and come pre-assembled, the risk of your cooler leaking is much lower than with a custom loop. They’re still more risky than air coolers, but compared to custom loops, they take a lot of user error out of the equation. Plus, AIO coolers typically come with a warranty that covers damages to your PC in the extremely rare event that the cooler leaks as a result of a manufacturing defect. 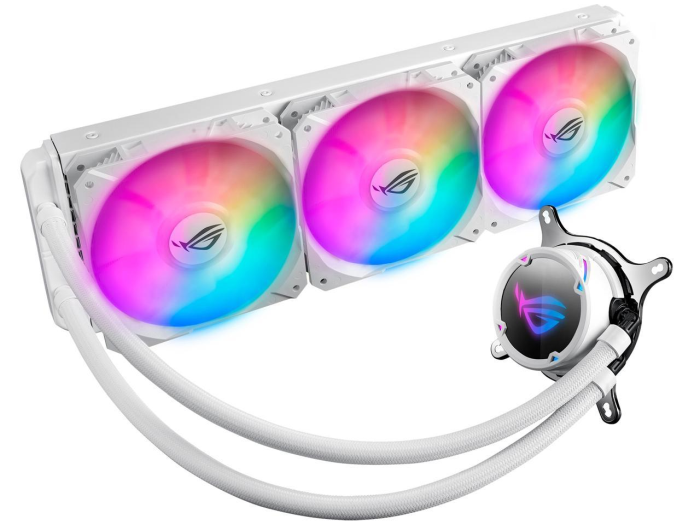 Cold and white, like the artic used to be.

While AIO coolers are more customizable than air coolers, they don’t allow for as much flexibility as a custom cooling loop. That means that, like air coolers, you’ll need to make sure the AIO you choose will fit inside your PC.

The thing that makes AIO coolers so attractive is also one of their biggest weaknesses. Because they’re all part of a package deal, one component of an AIO failing can mean the whole thing is useless. That means if the pump on your cooler stops working, you’ll need to replace the entire cooler and your computer will be inoperable until you replace it.

While AIOs have made strides in recent years, they are still the shortest-lived of the three types of coolers. With custom loops and air coolers, you can easily use the same cooler for a decade without an issue. But most AIO coolers are limited to a lifespan of about 5 or 6 years, either because the pumps die, or because of permeation.

We have lots of AiO Coolers to choose from 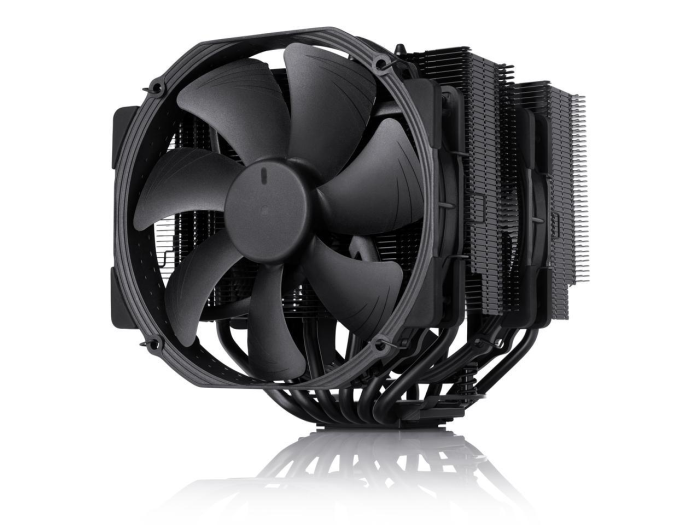 Just go with the airflow

Even though water cooling is generally more efficient than air cooling, custom cooling loops and AIOs can’t really compete in terms of price. Sure, there are premium air coolers that can run at a higher price than a cheap AIO, but they can also outperform said budget AIOs, both in terms of cooling and noise.

When it comes to PC cooling, you can’t get much more simple than a heat sink and fan. Plug the fans in, mount the heat sink on the CPU with a few screws, and you’re done.

One of the top reasons to choose air cooling over water cooling is the peace of mind air coolers offer. With no pumps or tubes of liquid draping over your hardware, you’ll never have to worry about a leak frying your motherboard. 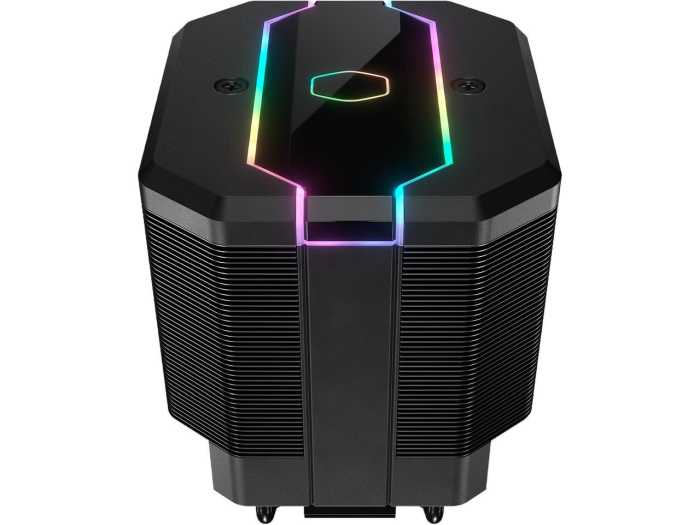 Also, an air cooler’s only point of failure is its fan, which is both cheap and easy to replace. The worst you’ll get from a dead CPU fan is thermal throttling, and you may even be able to run your computer without one temporarily while you wait for a replacement fan to arrive. A malfunctioning water cooler pump, on the other hand, can lead to some serious damage to your cooling loop and PC, while an AIO will need to be completely replaced if it stops working.

With no liquid levels to monitor, and only one point of failure, maintenance is trivial with an air cooler. With an air cooler, you can set it and forget it. The only time you’ll need to muck about with your cooler is on the off-chance that your cooler’s fan dies or when you need to give it a shot of air during your annual PC cleaning.

When it comes to longevity, AIOs have made some great strides in the last few years, with many of them rated to last 5 to 6 years. But air coolers regularly last for a decade or more, with the fan easily being replaceable. That means that an air cooler can easily last for the entire lifetime of your PC, and then some, with little to no maintenance or risk. 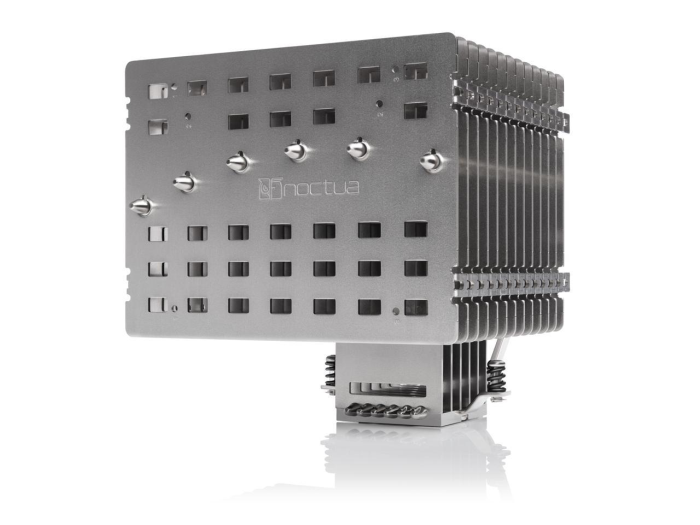 The biggest slight against air coolers is their lack of cooling performance in comparison to cooling loops and AIOs. While high-end air coolers can hold their own with the bottom end of the water cooling market, they perform worse in high-intensity, short-burst loads and can’t cool extreme loads quite as well as liquid can.

Of course, if you’re building a moderate machine simply for gaming and other basic computing tasks, an air cooler is often more than capable of handling the heat your computer is going to put out.

Look through all our CPU Fans & Heatsinks

With the simplicity of air coolers, you aren’t left with much in terms of flexibility. Not only does this mean that you’ll have to choose a cooler that can fit inside your case, but you’ll also need to be careful that your cooler doesn’t cover any PCIe or RAM slots. And unlike custom loops and AIOs, you won’t be able to directly pipe the heat out of your case, meaning some of that hot air will blow over other components inside your case on the way out.

Another drawback of using an air cooler over a water cooling solution is the noise. This is more of an issue with cheaper air coolers, and completely passive CPU coolers that work well do exist, but you’ll need to shell out a bit more.

For the coolest coolers and more cool components, shop Newegg