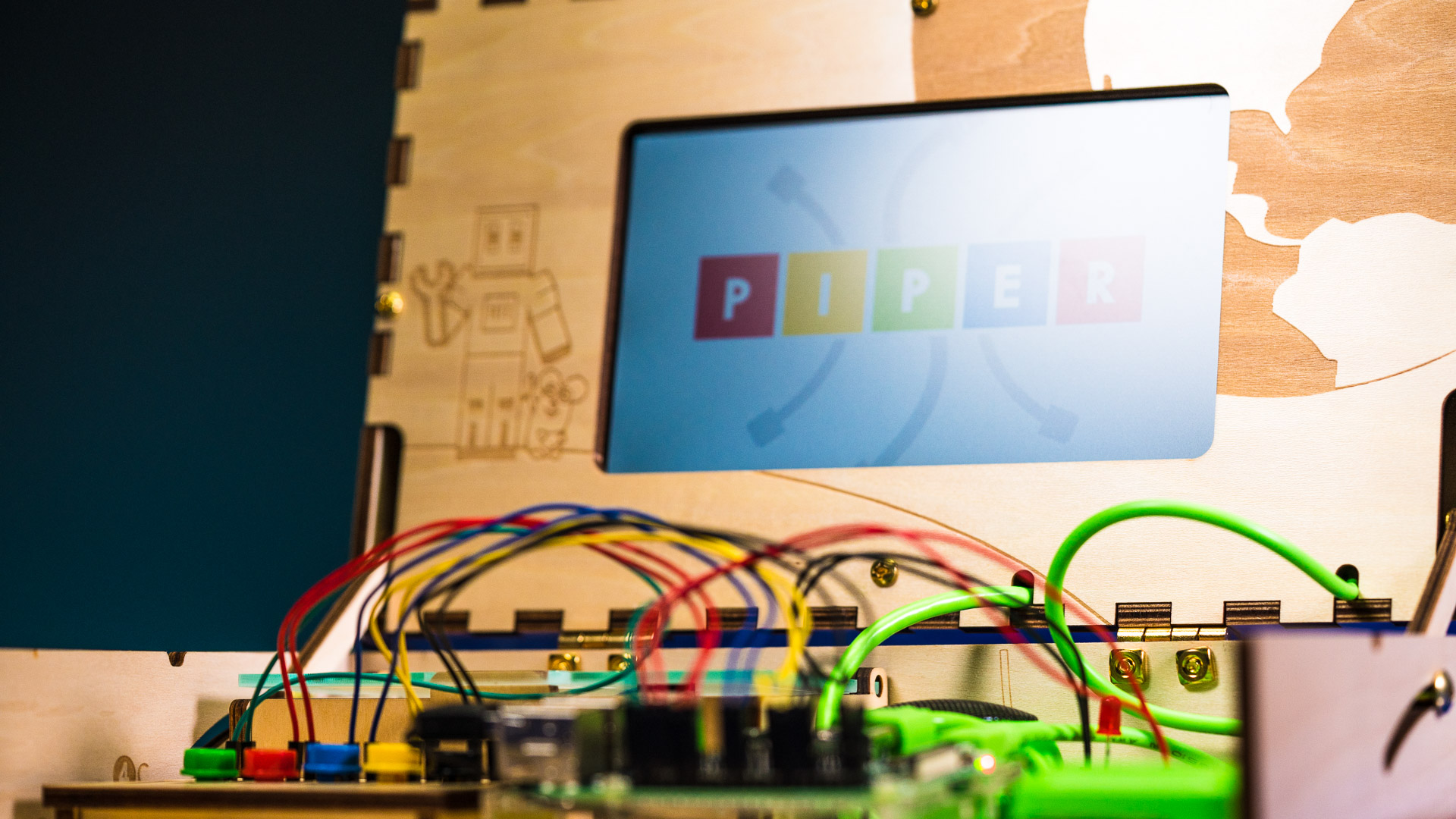 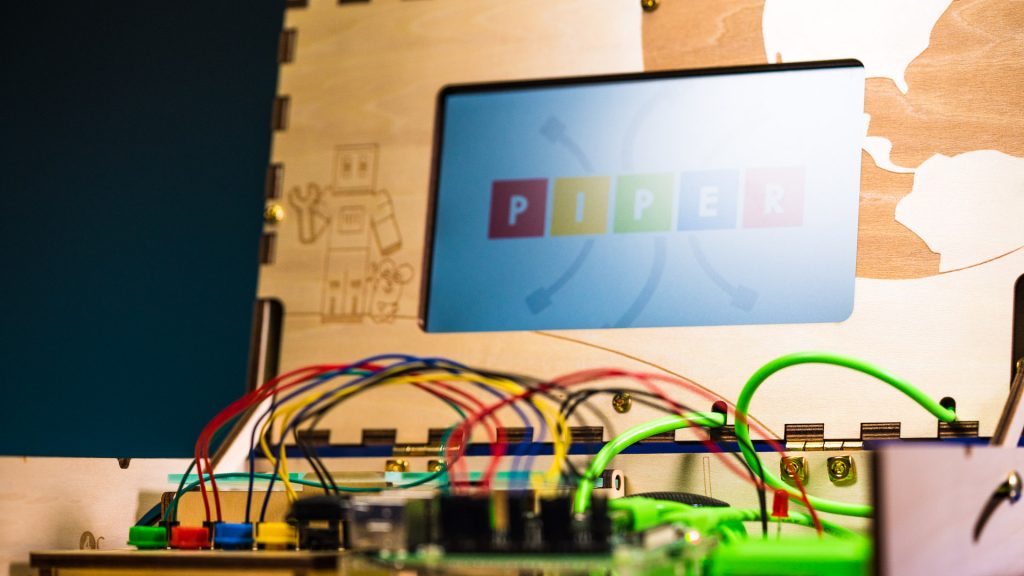 Devices like smartphones, computers, and gaming consoles are more accessible to kids than ever before, but it can often be difficult for parents to know what games and apps actually help their kids learn. To uninitiated parents, Minecraft just looks like any other game, if that game were made of Legos. The reality is that Minecraft can be more than that, and can be used as a fun and interactive learning tool for kids, parents, and teachers.

The Piper Computer Kit is a DIY computer building kit that teaches kids how a computer works, building on concepts young gamers will be familiar with from Minecraft. Piper is tailored for children between the ages of 8 to 13 years old who have an itch to build their own computer and want to get into creative world of Minecraft. What better way to learn how to code in real-life than to code in a fan-favorite game? 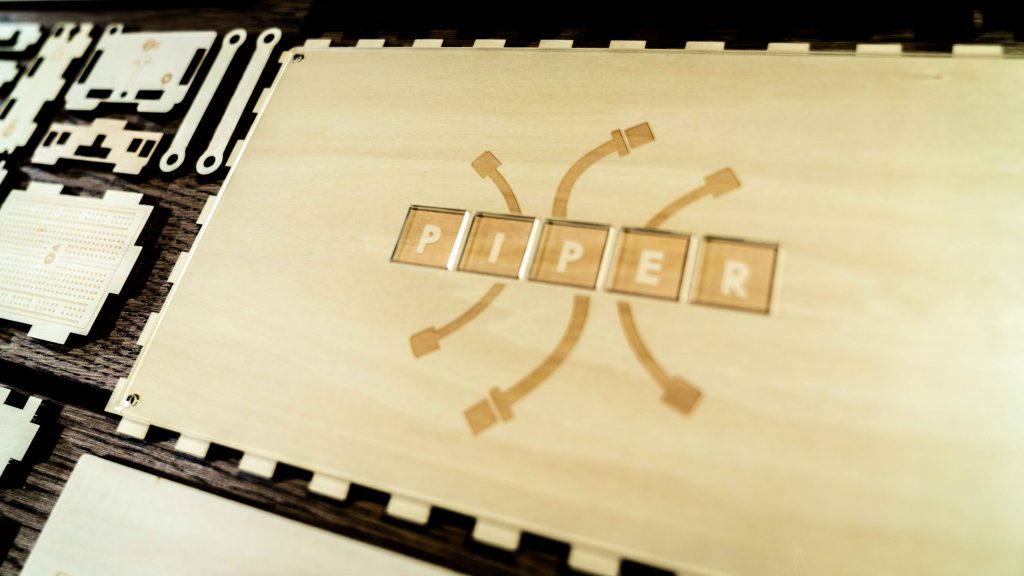 Piper might be the only solution with this level of digital-to-real life integration, but to be successful it has to seamlessly blend education and fun.

When first opening the box, I couldn’t help but notice the beautiful craftsmanship of the wooden components. Yup, the computer case is made of wood “puzzle-like” pieces, which is the first of its kind I have ever seen. Each piece is labeled with a part number and areas of interest, like where an HDMI cable or another wooden component will go.

Piper’s instructions are printed on a giant blue poster that resembles blueprints for building seen in movies. While I do appreciate the attention to detail, I did find it difficult to understand whether some wood pieces were flipped around, and I would like to see the instructions have some color-coding, especially for kids.

While building a computer may be a challenge, that is part of the creation process and fun, whether it’s in real life or a virtual building world like Minecraft.

What’s in a DIY computer kit 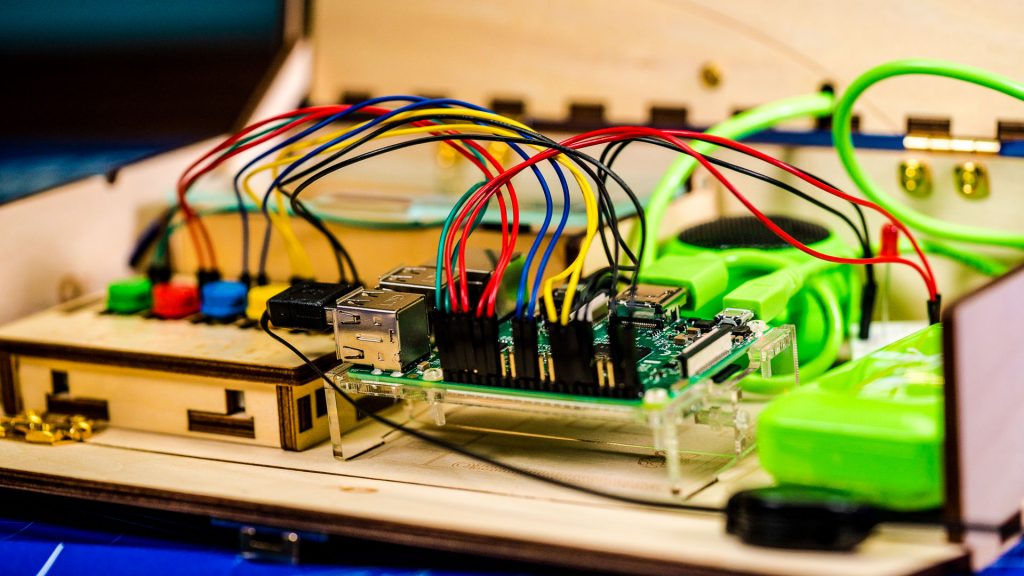 Putting together a 3D puzzle

The brains behind the entire operation lie in the powerful Raspberry Pi 3. That’s the same component also used in many other robotics kits, so aspiring engineering and programmers can take the board apply what they’ve learned with Piper to other applications.

Rasberry Pi boards are the most common in DIY computer kits, but there are numerous others as well, like Intel Edison, Intel Joule, Arduino, NVIDIA Jetson, and more. There are numerous uses for a Raspberry Pi or other types of maker board, which can be programmed to do virtually anything from regular computing to IoT (Internet of Things) and robotics applications. It’s a quad-core CPU clocked at 1.2GHz, a Broadcom VideoCore IV for the graphics, 1GB of ram, 2.4GHz 802.11n wireless adapter, Bluetooth 4.1, microSD storage, and HDMI port, 3.5mm audio-video jack, and  four USB 2.0 ports. It also has 40 GPIO pins to connect the action button controller, an Ethernet port, and camera and display serial interfaces. 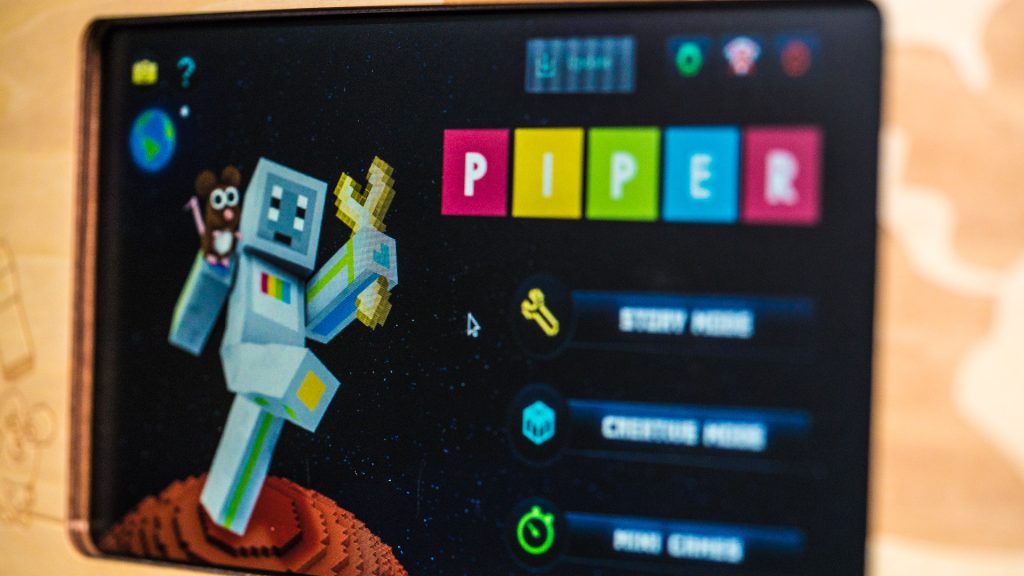 The included screen is a 7” LCD display comes assembled on one of the lasered wood pieces, and runs Minecraft at 800 x 480p resolution. While it’s unclear what the refresh rate is set at, the game seems to run at a smooth 30-60 frames per second. This could potentially decrease as creations in the game become more complex and require more CPU and GPU processing power.

The USB mini-stereo speaker sounds good for such a small unit, and connects directly into the Raspberry Pi 3 audio jack. When the speaker battery runs out, it can be charged through any USB port, including the battery pack, in a few hours. The SD card included with the unit comes pre-installed with eight game levels, which is enough to kick off the fun before getting to the downloadable content. 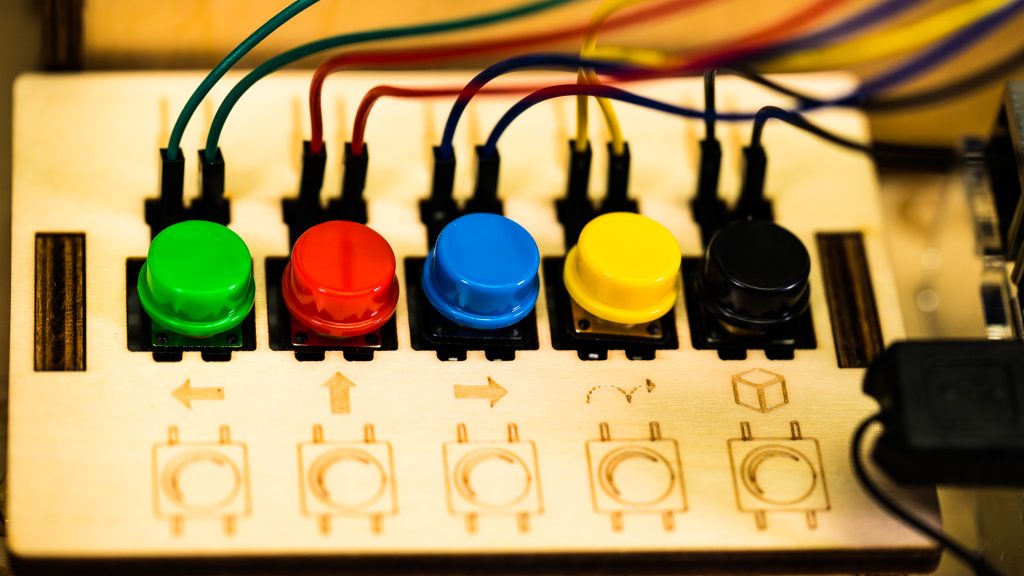 The controllers for Piper are interesting because it comes with a tiny mouse to control what you want to look at on screen, while the action buttons have to be constructed on a breadboard and wired correctly to the Raspberry Pi 3. I found the mouse too small for my adult hands, but it looks perfect for the age range Piper is targeting. The action controller can be customized since the colored buttons and wires can be connected in almost any way on the breadboard, according to user preference. There are also two additional breadboards, a handful of jumper wires, and LEDs which are stored in the bottom section of Piper, along with the other buttons, hinges, latches, and more. 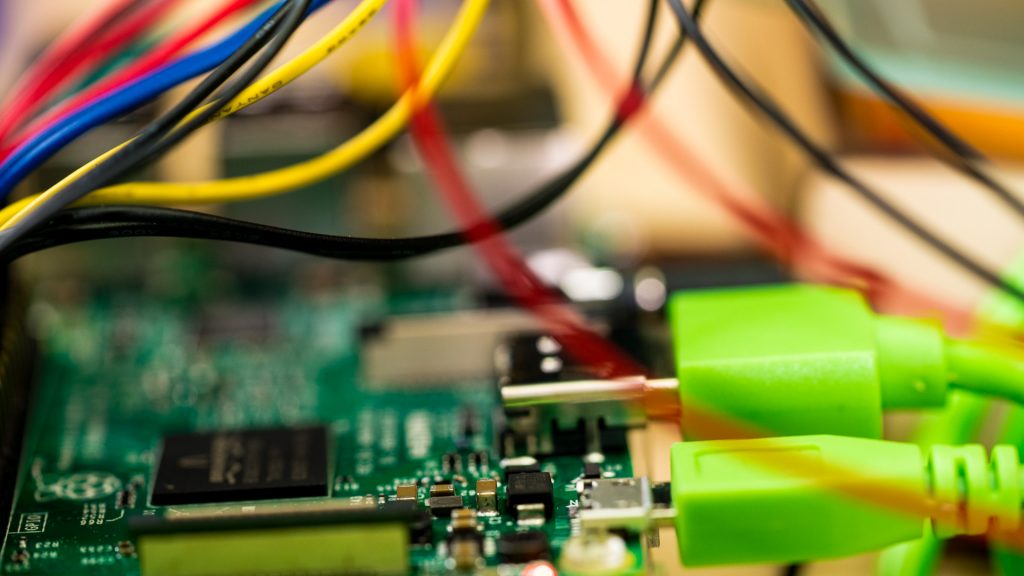 Before kids can jump into Minecraft, they’ll have to actually build the Piper computer box and storage chest. While some kids may find this very inconvenient to play Minecraft out of the box, it’s the kids who love building their own creations that will get the most satisfaction.

I found myself having to backtrack a little bit during construction, but when all is said and done, it was really awesome to see the Piper computer finally power on after about an hour or so of building and tinkering. 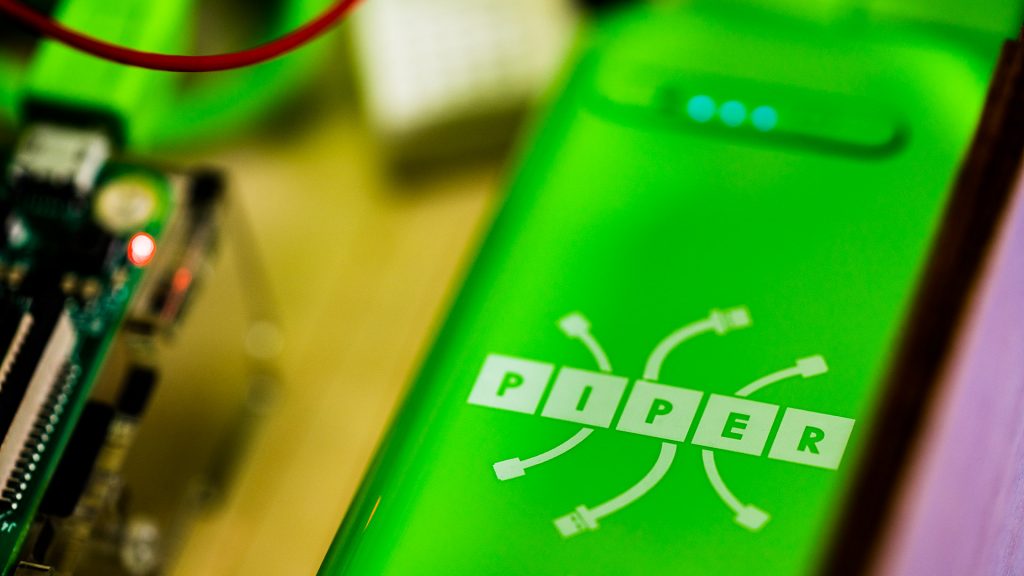 With the included 6000mAh USB rechargeable battery pack, most users will experience between four to five hours of battery life, depending on the intensiveness of the gaming or programming session. The batter itself can take about three to six hours to charge.

That battery life is great for a gaming session or classroom lesson, but keep in mind the battery pack powers the Raspberry Pi 3, a 7” LCD screen, and a USB-powered mini-speaker. The screen takes most of the battery power, so if kids want longer sessions, they can hook up an HDMI monitor or TV that plugs into the wall.

On the Piper community forums, you can find some posts where parents and kids used a stronger battery pack or ways to connect the computer kit to an outlet. These setups are at your own risk, but reaching out to their support team can help point users in the right direction. 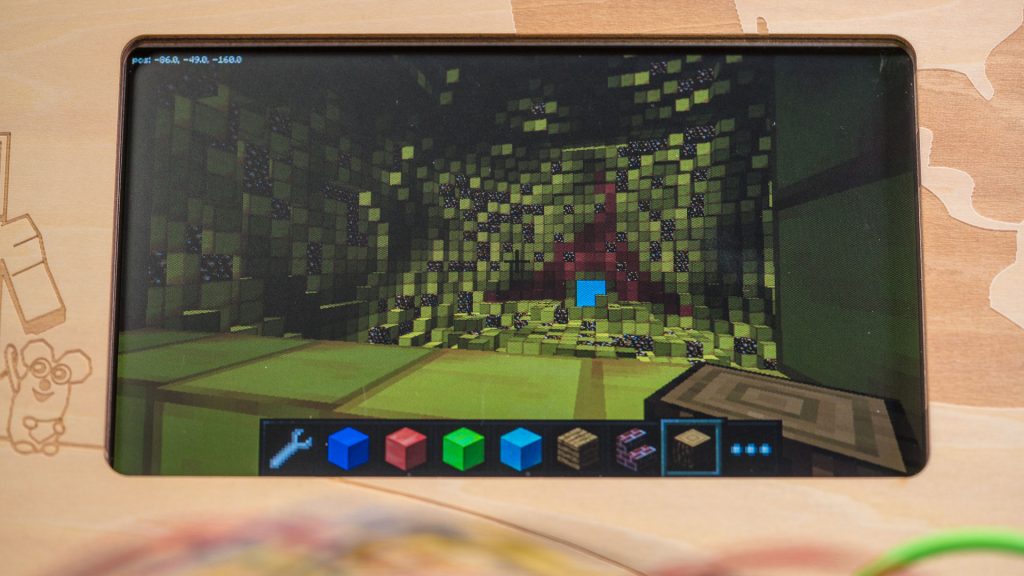 After finally completing the computer build and powering on, Piper takes kids through a Minecraft tutorial on how to set up the action controller board. With Minecraft animated instructions, kids will learn the basics of connecting the jumper wires to the buttons on the breadboard and discover what happens if they plug the jumper wires in the wrong place.

As kids progress through the tutorial, they’ll learn how to use switches, buzzers, and LEDs, and how they affect gameplay. Kids eager to play can plug a keyboard into one of the USB 2.0 ports or connect via Bluetooth to move, jump, and grab Minecraft blocks, but they’ll miss out on learning how each button is programmed and how the buttons connect to the Raspberry Pi 3’s GPIO pins that are used in other STEM toy kits.

Kids can exit the Minecraft Piper version and they’ll be taken to a desktop where they can use coding programs to further their knowledge. Some of the coding tools, like Python 2 and JavaSript, are included with Piper. Young programmers also have access to Epiphany Web Browser, Python Games, image views, and more, making this a self-contained portable mini-computer. Other operating systems like Windows and Ubuntu can be uploaded to the microSD card, opening up the gateway even more for other applications that can keep kids hooked on learning. 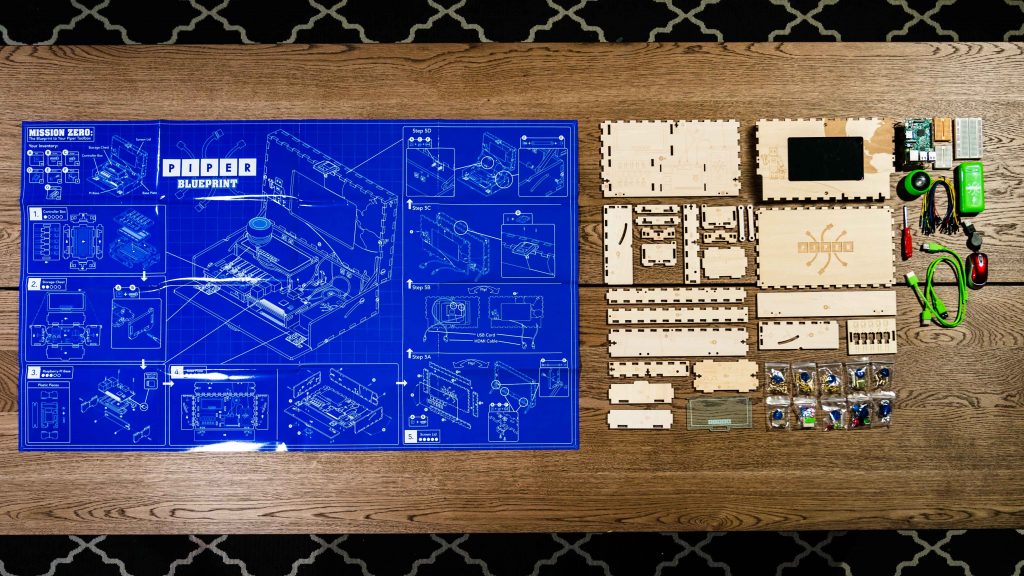 Designed for kids ages 8 to 13, the Piper Computer Kit is a jam-packed portable computer that’s not only used for fun, but for coding and engineering too. It’s a thoughtful product that aims to bridge the gap for young programmers between just playing video games to possibly learning how to code their own games and electronics. Targeting such a young age group, the idea is to get kids involved at an early stage where they can develop skills that lead to valuable opportunities later in life.

One issue with the kit is the price. At $300, the Piper Educational DIY Computer Kit is not a cheap toy, which could scare away parents from pulling the trigger on one of these. Whether it’s worth it or not is dependent on the goal for parents and children – whether they need a computer or a learning kit. If the goal is the former, then there are many other solutions at the same price point that would be a more capable computer. That is not the purpose of the Piper Computer Kit though. It’s an experience and a skill-building tool, and no pre-build system could match that.