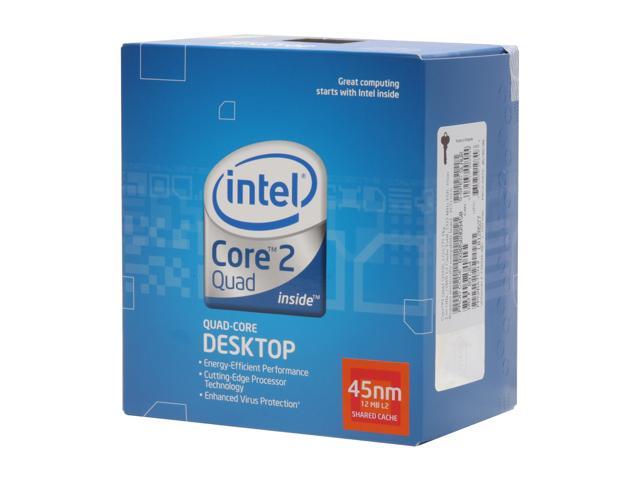 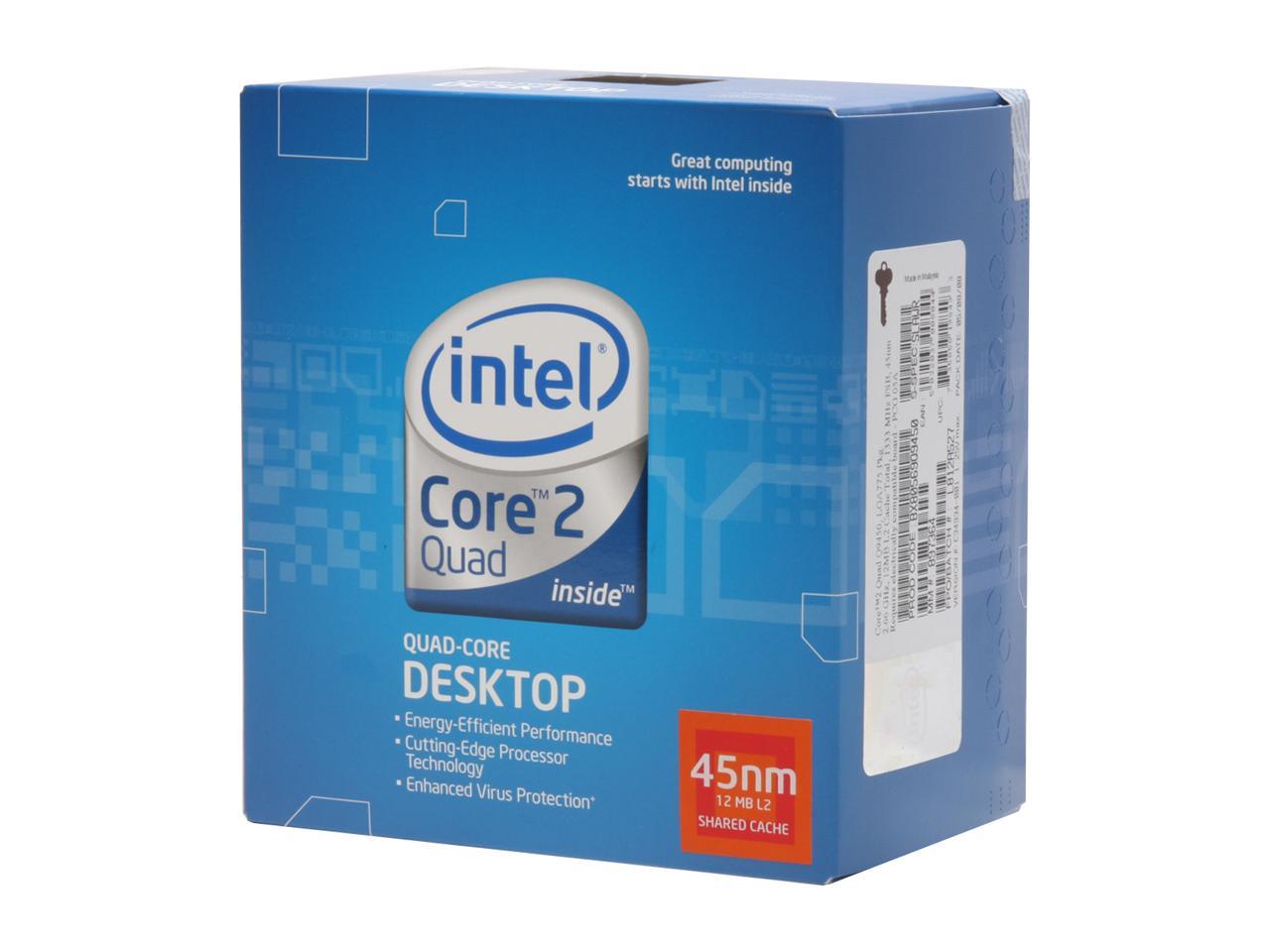 (281) Write a Review
OUT OF STOCK.
Specs
Reviews

Pros: 45nm die for cooler processing, powerful capabilities comparable to some Core 2 Extremes at a fraction of their prices. New gaming benchmarks showing much SMALLER gap over the E8400/E8500 in games when compared to Q6600 to E6600. Personally, I'm coming from a Core Duo 2.0GHz Merom laptop & an aging Pentium IV 2.4GHz HT Northwood desktop (go ahead, laugh all you want). So this new build is a huge jump for me, VERY satisfied with the load times of many of my programs. I'm not an overclocker but I believe most people can get this up to 3.5GHz easily (With less proportional temperature increase) and a lucky few with good batches can hit 3.8GHz before hitting the FSB wall. I can't wait to test/stress this processor some more.

Cons: Intel will not release the TJMax value for these processors so most temperature reading programs out there are not accurate at all, the only one many people trust for now is RealTemp currently at v2.6 with TJMax at 95 (The method used by the creator to determine the TJMax is quite good, and though it's still not perfect, it's at least more accurate than readings from BIOS/CoreTemp/SpeedFan/SIW/Everest or some no-name software that came with your motherboard). Sadly, many people on forums/newegg are either getting worried for nothing over their "high" Q9450 temperatures OR falsely excited over their extreme "lower than ambient" temperatures on air, LoL. So for most of you, just wait a while and things will clear up, hopefully. =) And finally, there are also a small group of people who have been getting stuck sensor(s) on their Q9450 but that only affects overclockers who must know the core temperatures, shouldn't affect cpu functionality for normal usage.

Overall Review: If you are really in to pushing this CPU to the limit don't use it with an x48, x38 chipset. Your 0vercl0cking threshold will be limited because those chipsets dont handle the new 45mn quads very well. Dont get me wrong here if you have an x38 or x48 board you will be extremely pleased with this product, however if you are building a system from the ground up please go with a p45 chipset. That will allow you to get a much higher clock.

Overall Review: This CPU has power-saving feature: it downclocks the CPU if there is no load. So if you look at it in Computer Properties it'll show you 2.GHz, that's normal. When you're playing games or working the CPU will run at full speed. You can disable this feature in the BIOS. So, please don't leave bad reviews for a product you're not familiar with. Read the manual first.

Cons: None that I can think of yet.

Overall Review: This is a great processor. I went from a Q6600 to this and, well... let's just say I am more than impressed and satisfied with my choice. It handles anything I can throw at it (besides a toaster but that's neither here nor there). The 12MB of L2 cache this bad boy has really helps... trust me. A lot of people may think that unless you are using apps capable of multi-threading that Quad cores are basically useless... but if you're a gamer, every bit of FPS you can squeeze out of your machine helps and this will do just that.

Pros: I just built a PC with one of these Q9450s, after having built an otherwise identical rig with a QX9650. I used the very good Asus "Rampage Formula" motherboard and Xigmatek HDT-S1283 CPU cooler. The Q9450 was stable at 3.6GHz with FSB = 450MHz. The QX9650 went to 3.8GHz at FSB = 400MHz; it would go higher but got so much hotter that I decided against doing that. So ultimately there was not much difference in performance between the two machines. What surprised me was that the Q9450 throws off MUCH less heat than the QX9650, both at idle and under full load. You can tell this just by feeling the PC exhaust air temps. I can only attribute this to the fact that the Q9450 was "C1" Revision (stepping) compared to "C0" for the QX9650.

Overall Review: (cont) A side effect is that I could run several case fans at half the speed I needed with the QX9650, and even the mobo-controlled CPU cooler fan ran at half the speed. So - with the right motherboard you can expect very good results from these newer Q9450 chips. I would guess that the Q9550 would have similar advantages, and would probably clock to 3.8GHz. Bear in mind that prices at least on the latter may change soon, a lot, and an even newer stepping may be imminent. But you can't do better for a quad than one of these Yorkfields, and a good mobo will justify its extra cost by letting you get the most from them.

Pros: Lower operating temperatures than the Q6600, and is faster clock for clock. 12MB L2 Cache and SSE2 instructions means better performance in many video/picture editing/rendering apps. With a little bit of overclocking (3.0-3.2 Ghz stable is extremely easy with this, as long as you have decent mb/Ram), you essentially have a QX9650 in your hands for about $700 less.

Cons: Higher price than Q6600, 8X multiplier severely reduces overclocking ability. Intel refuses to release Tj figures, so we're forced to guess how high our cores are running at (use RealTemp for the most accurate temp readings).

Overall Review: If you already have a Q6600, probably not worth upgrading unless you demand the cutting edge...

7 out of 7 people found this review helpful. Did you?
Ricardo R.
Ownership: 1 day to 1 week
Verified Owner
If you want a monster quad core for a suitable price, this is it. As soon as I had my OS up and running, I noticed the difference between this and my old AMD 3500. I haven't even overclocked anything8/10/2008 3:42:47 PM

Pros: If you want a monster quad core for a suitable price, this is it. As soon as I had my OS up and running, I noticed the difference between this and my old AMD 3500. I haven't even overclocked anything yet and it's screaming.

Cons: None at all. I would trade my wife for this processor, but I'm smart enough not to have one.

Pros: nom nom nom. this champ eats data like its nothing. runs super cool 20-30C (not o/c'd). great bang for your buck.

Cons: None. Could have used a racing stripe to reduce depreciation.