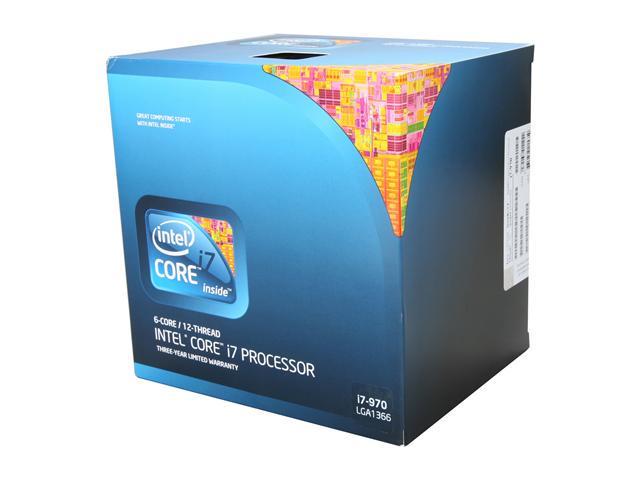 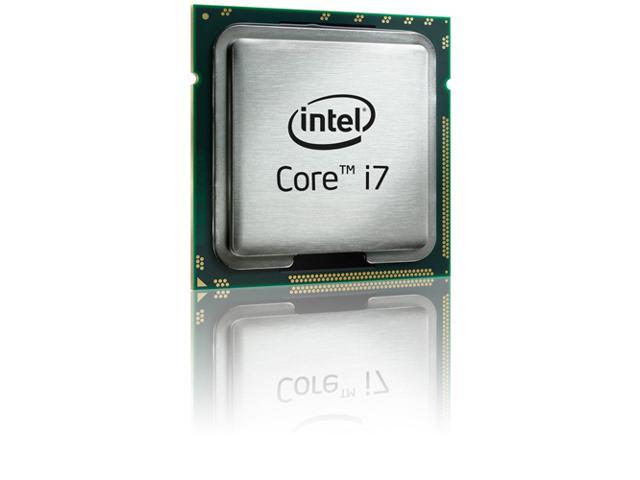 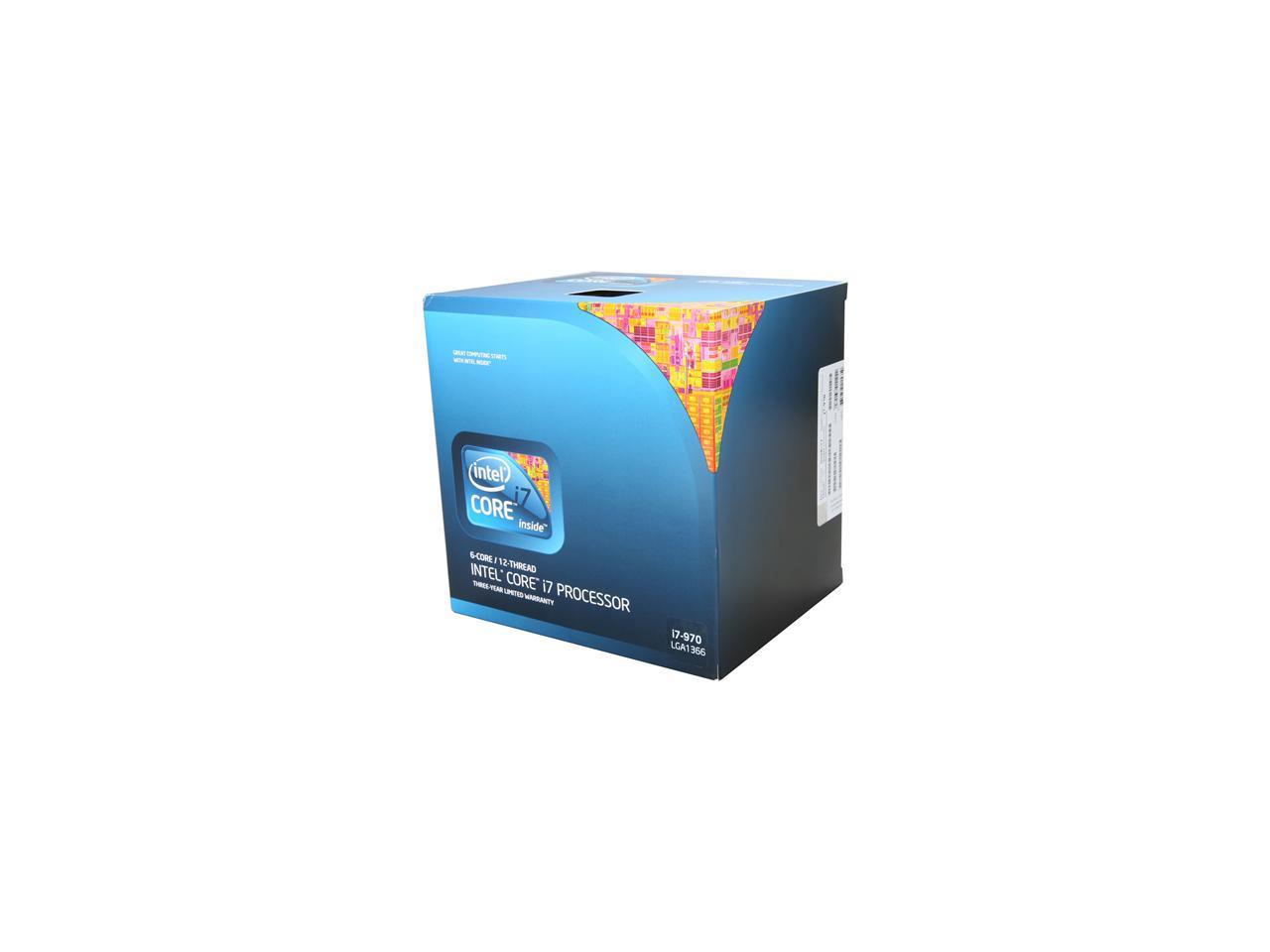 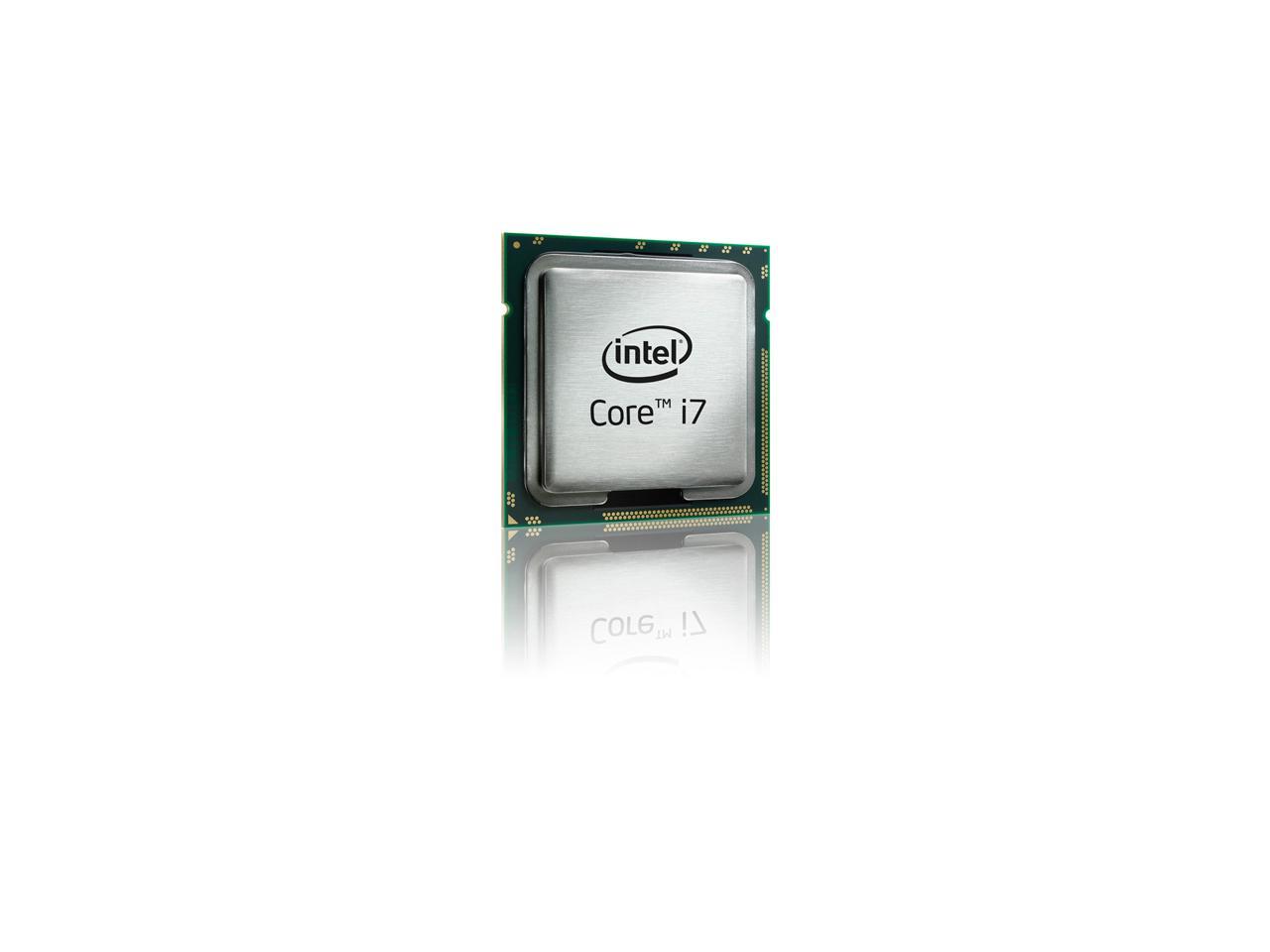 (95) Write a Review
See more "lga 1366"
In stock.
Ships from United States.
Most customers receive within 2-8 days.
Overview
Specs
Reviews
Upgrade your system with the Core i7-970 and own Intel's top-of-the-line desktop processor in the world. Based on the 32nm Gulftown manufacturing process, this six-core CPU added with AES new instructions is designed to handle the most intense compute and visualization workloads you can throw at it. The 12MB of Intel Smart Cache gives you blazing speeds you never realized were possible.
Take advantage of Intel Turbo Boost technology which dynamically accelerates CPU performance to match your workload. Hyper-Threading technology effectively doubles the output of your six physical cores, giving you unmatched data processing. The Integrated Memory Controller optimizes data bandwidth with support for triple-channel DDR3 memory.
Add the Intel Core i7-970 to your system and you’ll never look back. Experience the brilliantly fast speed, versatility and raw power of massive multi-core processing today!

Overall Review: Great processor, needed a little more juice @ 4.5, other than that, was an easy overclock, running it on the Asus Rampage Extreme, the full calibrated power helps :) If you need a high end system, this processor will do it for you, after 4.5ghz you are pushing your luck, you'll have to seriously tweak the voltages. This processor had a review of only overclocking to 4ghz. Wrong! 4.4 is easymode.. 4.5 took a little pump in the juice :P

Cons: Price is a bit on the high side but you get what you pay for.

Overall Review: I recently purchased an HD video camera and after editing my first HD vacation video using Adobe CS5 Production Suite, I was unhappy with my system performance. Render time with HD video was about a 7:1 ratio. Seven minutes of render time for every minute of video. It was time to upgrade my Q9450 system. After a week of research I chose to purchase the Intel I7 970 processor paired with the Asus P6x58D Premium motherboard, 24GB of Kingston DDR3 KHX1600C93DK6 memory. Along with my Nvidia ENGTX 470 video card that I did not upgrade, my new system flies. HD video renders in Premier CS5 in real time 1:1 ratio. For you Flight Simulator fans, with everything turned up to max on my old system, I was never able to get frame rates above 11. With every turned up to max, my new system runs FSX sustained at 25 FPS. It’s amazing what six cores can do. BTW, as always, everything was purchased from New Egg and as always received outstanding fast service.

Pros: It looks like the 32 nm processor fabrication process works, because I haven't had a hiccup yet. I'm glad that I went with the 970 instead of 980X, because personally I don't really miss the 1/1,000,000 difference in speed. I'm running Windows 7 64 bit, and everything is moving right along.

Overall Review: Be careful when installing on motherboard, because it is said that you can bend a pin on the motherboard socket easily. Line up top or bottom edge, and the indentations on the side while the chip is still at an angle, then gently drop it. If you goof, lift out and redo - don't try to force anything or you could bend a pin in the socket. After chip is locked down onto the motherboard, instead of spreading Arctic Silver goop evenly on the chip surface to accept the heat sink, squirt a dab about the size of a pea onto the center of the chip. This is the advice of Intel, not me. Intel included a heat sink that had screws that were nearly unusable, but if you use a thin flat blade screwdriver instead of a Phillips, you can cinch it down. Really stupid design, but it does the job. Intel includes some heat sink compound, but you should spring for the Arctic Silver compound, it just seems to be better quality.

Pros: This is a GREAT! GREAT! CPU, I bought this for my first custom build. My other good computer is out of date (7 years old Sony Intel Pentium4 3.0 Ghz). This CPU is the same specs as the extreme version except the i7-970 multiplier's locked and the extreme version just few more Mhz is added to it. I don't want to pay another few hundred dollars more for a couple of minor changes. This CPU is FAST enough to get things done at its stock 3.2Ghz. I am not a gaming sucker but, would like my computer to runs as good as it looks...... I did few minor changes to get 4.1 Ghz on a stock intel CPU cooler that came with the i7-970. Changed stock CPU Vcore voltage to 1.3750v and the Bclock 133mhz to 170mhz. (170x25)=4250mhz (4.1ghz) and set my DDR3 ram to1066mhz. it's very stable and blazing FAST! bench test on 3Dmark11 get perfectly high scores at any places. CPU idle between 27-32c and cores temp. between 30-45c is monitor by EVGA E-LEET tuning Utility.

Pros: The -7-970 is as high as you can get at the moment without investing in the price heavy-overclocking friendly extreme series and packs a punch for what its worth (which is still by no means a cheap processor at $600 at the time of purchase) Even without the extreme tag, it is very capable of overclocking but is not "unlocked"

Cons: Not so much of a con, but since it is not unlocked; it is not the most capable of overclockers.

Overall Review: Performance rivaling the extreme series without the much higher investment.

Pros: Does 4ghtz easy. Who needs Sandy bridge? 6/12 cant beat that to do REAL computer work.

Cons: *NONE* price maybe a little high the new stuff will be out next month.

Pros: Best Price per performance bang for buck Very, Very, Very Fast - Prime 95, OCCT, and 6+hour Crysis gaming session stable at 3.85 ghz with a 160 bus bump from 133 with VERY low vcore bump to 1.225v on an ASUS Rampage III Formula on air with a Coolermaster V6GT. Temps are in the 32-36 range at idle overclocked with a little Arctic Silver5 Very Nice stock Fan/Heatsink, yet opted to go 1 louder to 11 with the V6GT Bets Bang for Buck

Cons: Locked Multiplier to 25 but no biggie if not looking to go 4.0 + crazy I won't do the dishes

Overall Review: If looking for an air cooled solution and an EASY overclock without changing multiplier's and all the benies of an Extreme edition cache and 6 cores with 12 threads all while saving about $400 for that GTX 580 sli setup ;)